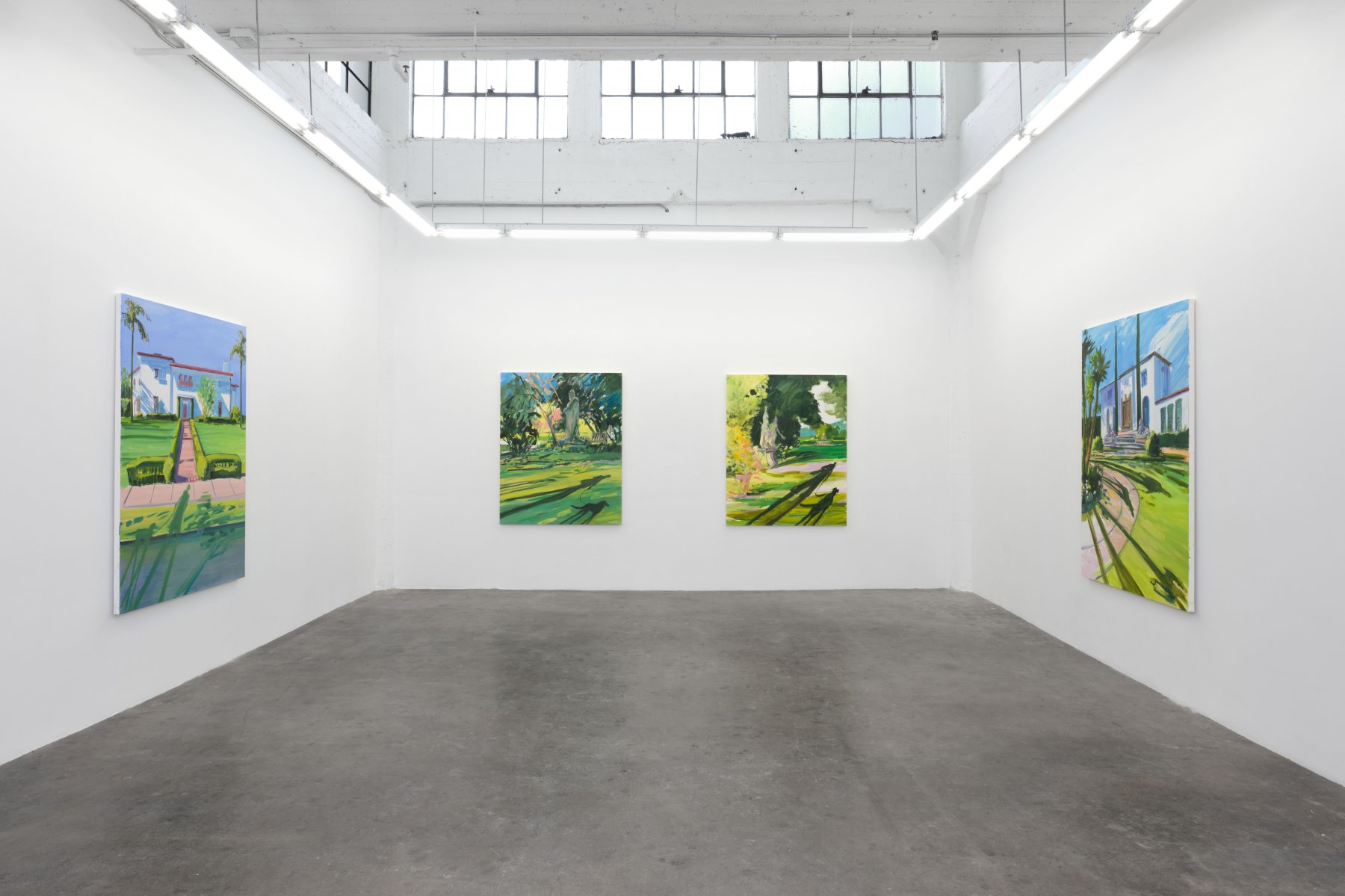 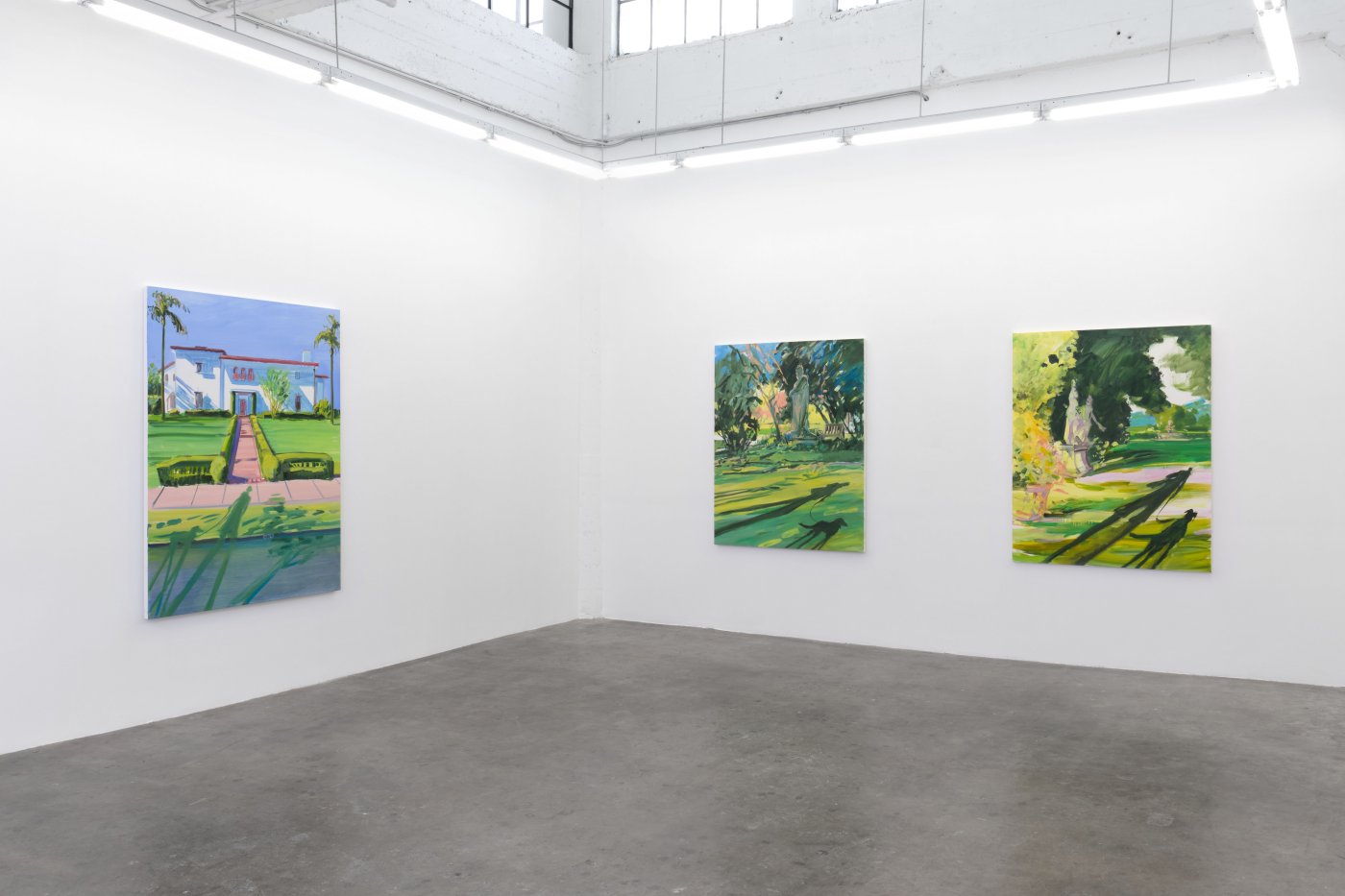 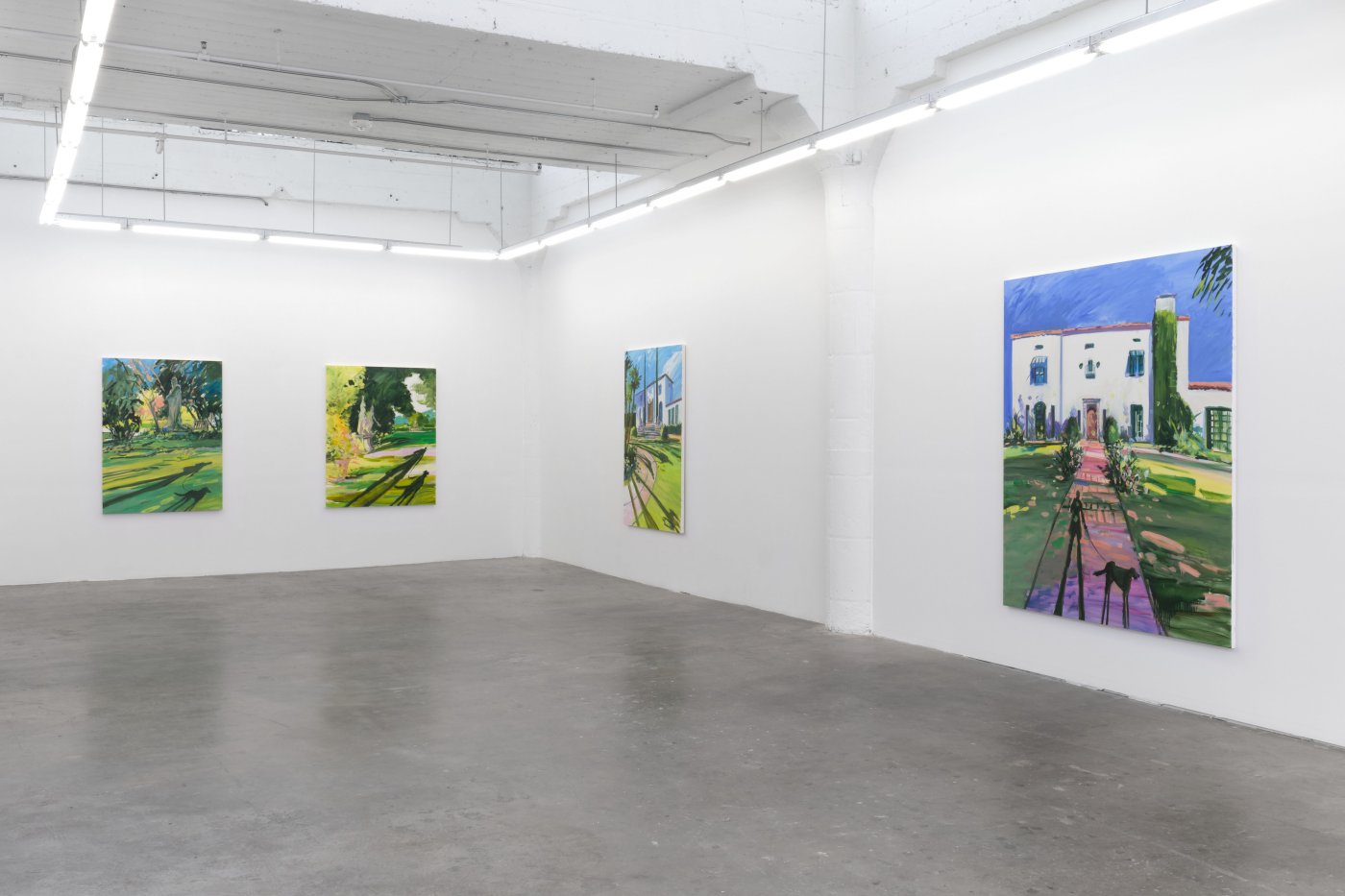 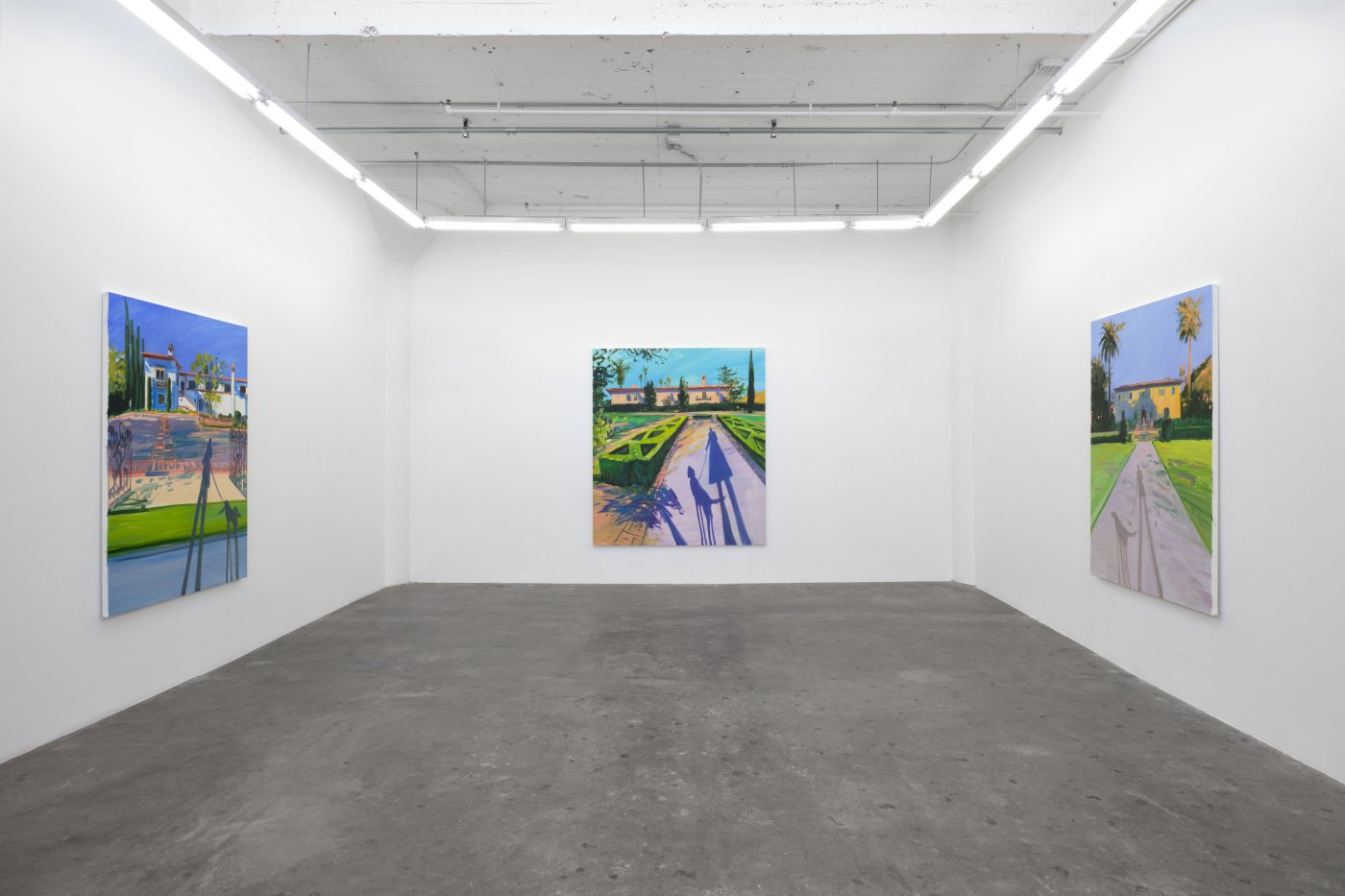 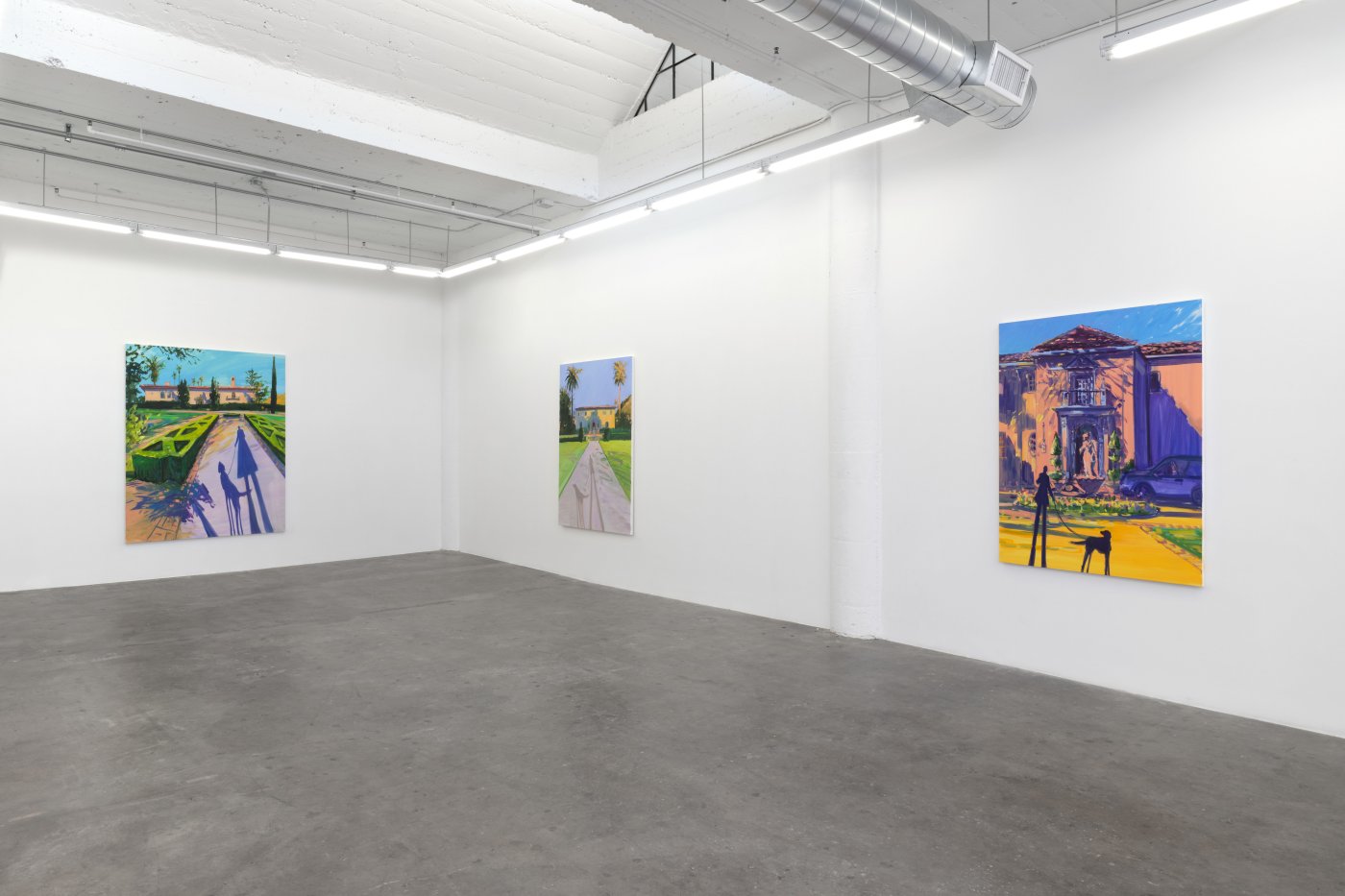 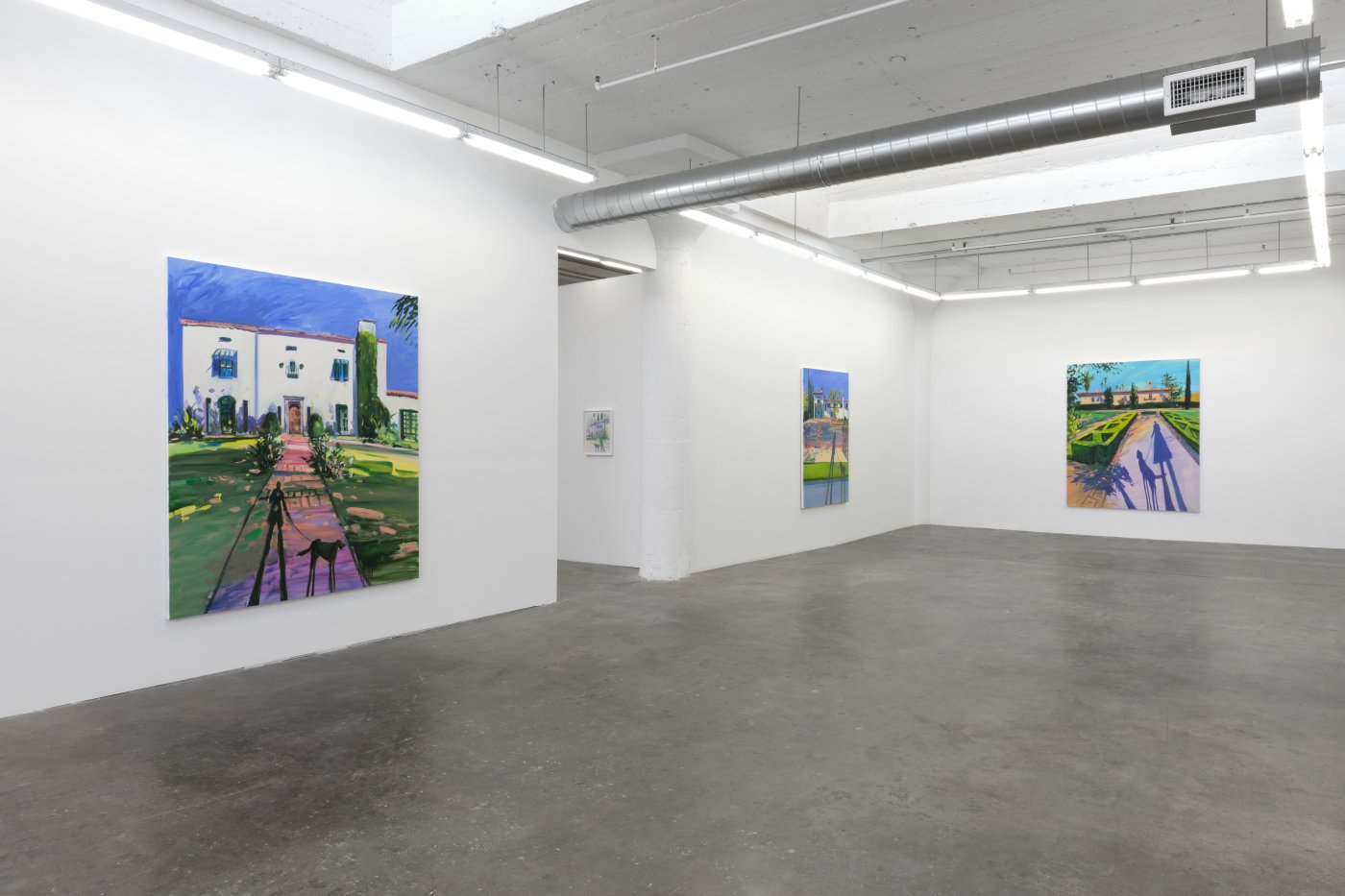 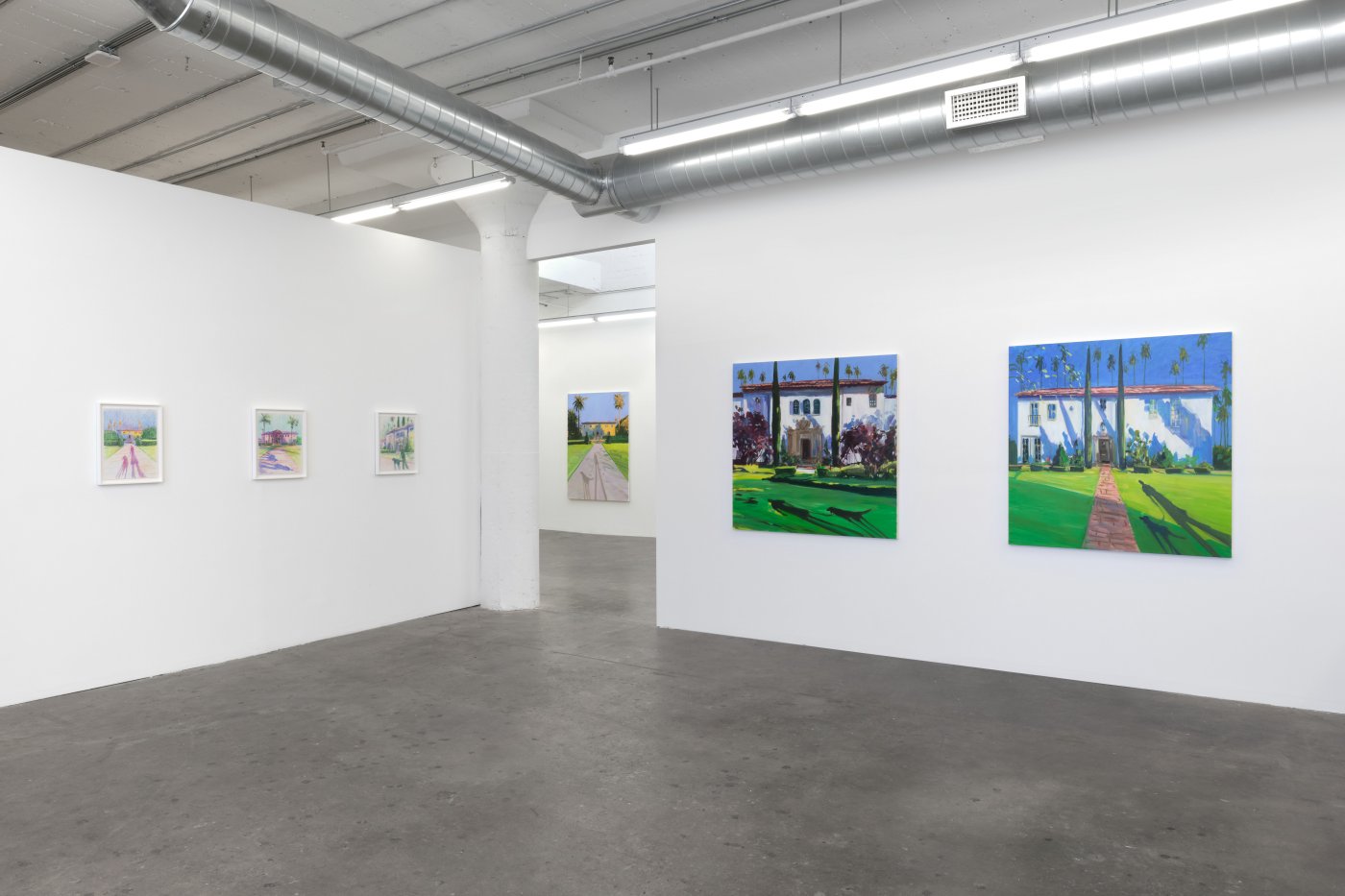 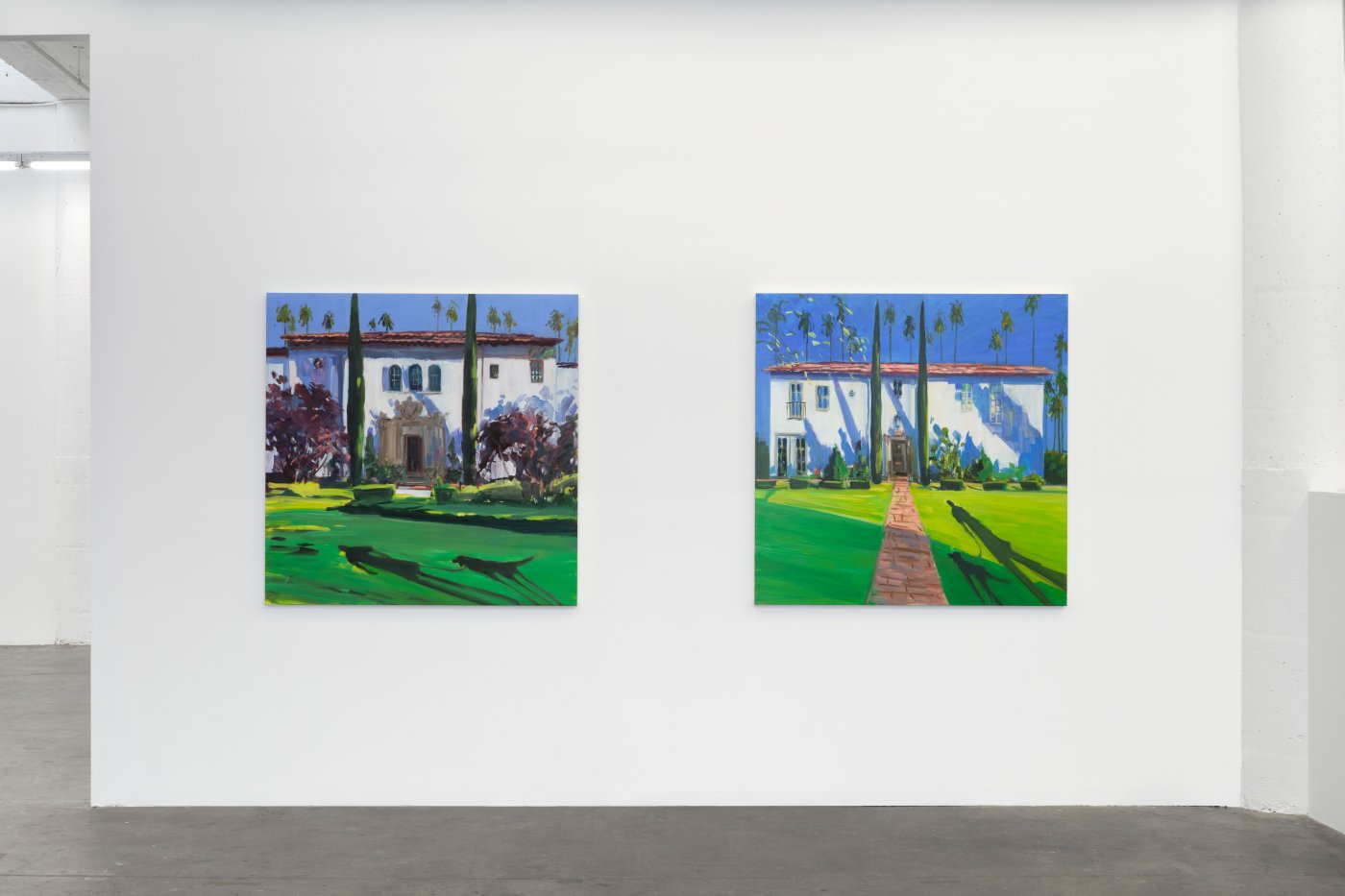 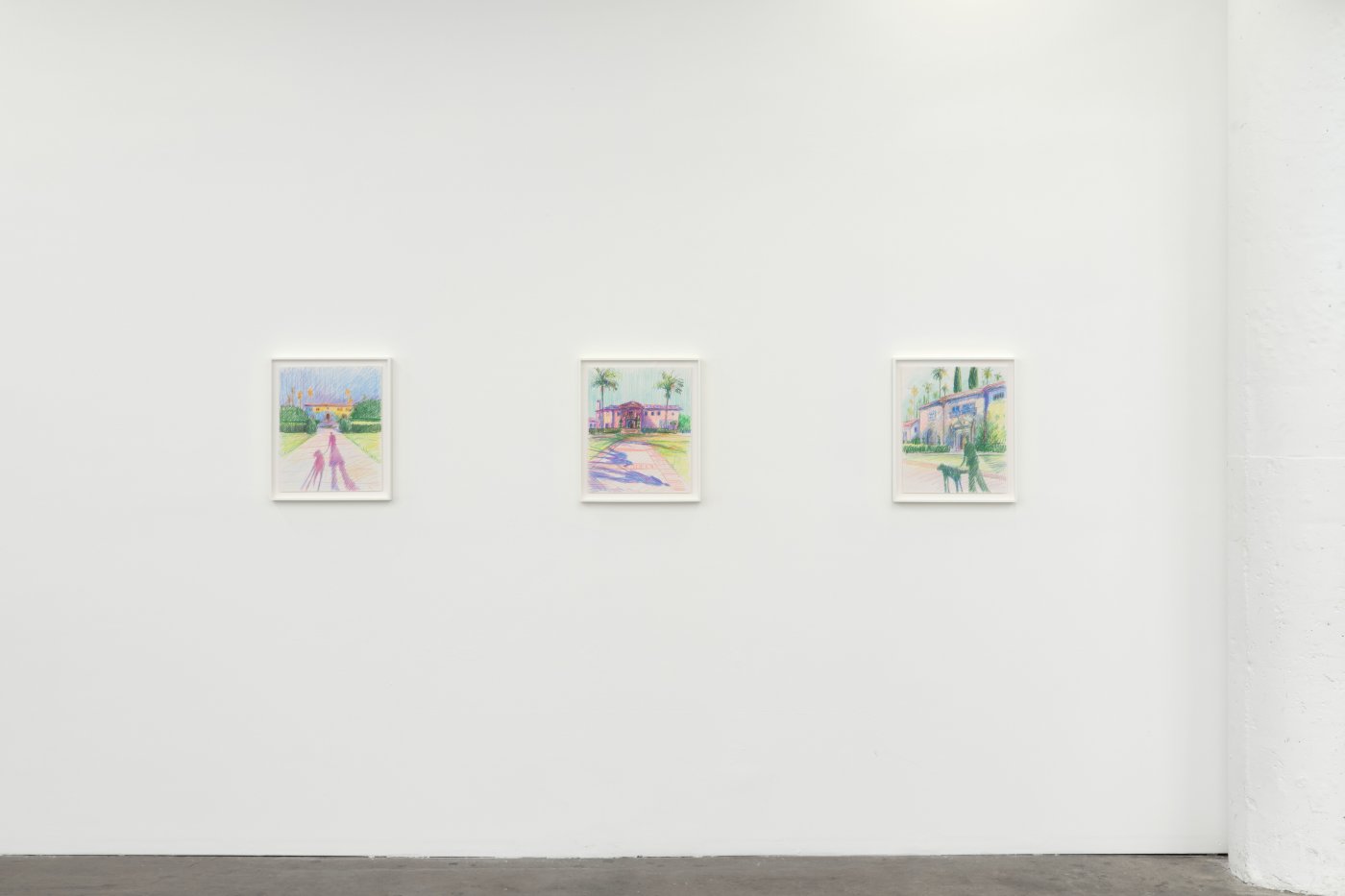 In new works (all 2022), Brown assumes the role of the flâneuse, the feminine counterpart to the 19th century archetype of the flâneur, a sophisticated and urbane subject whose powers of observation flow from his simultaneous immersion in and detachment from the living organism of the city. The anonymity that enables the flâneur to see without being seen manifests in Brown’s work in the long shadows that spill over the manicured lawns and sprawling driveways of stately Pasadena mansions. In each of the canvases and works on paper that comprise the exhibition, the silhouettes of a person—the artist herself—and a leashed dog cast a sense of alienation and menace over these ostentatious properties and their meticulously curated sensuality. Enticed by the artist’s lush palette and fluid brushwork but instinctively repelled by a host of visual and architectural cues designed to keep them at a distance, the viewer apprehends the subtle means by which the experience of even something as ineffable as beauty is determined by matters of class and access.

The body of works featured in Flâneuse are informed by Haunted House, an earlier series inspired by Brown’s wanderings through the streets of Williamsburg, New York, at the time eerily vacant due to the COVID-related self-isolation of the city’s inhabitants. In this series, the shadows of Brown and her canine companion indicate their physical closeness to the modest exteriors of these working-class homes (rendered by Brown as bright and compact squares of vivid color). The Pasadena pictures are conversely defined by the great distance between the flâneuse and the objects of her gaze. Brown’s shadow pools over verdant expanses of grass (Shrubbery; Lions Gate) and stretches down shade-dappled walkways that seem to recede endlessly (Fountain; Sierra Bonita), holding her forever at a remove from these monuments to 1920s opulence. In these pictures, as in the artist’s walks that inspired them, the owners of these lavish homes are nowhere to be seen. The Pasadena works document something of a homecoming for Brown, recently returned to these familiar streets after forty years away. Yet the artist’s familiarity with this terrain does not secure a sense of belonging; like the workers who fastidiously maintain the appearance of these homes and gardens, Brown is at once highly visible as one who is not a member of this community (whose gates, atypically for the area, were left open) and who also appears only anonymously, at the margins.

Alpheus and Arethusa and Zeus transport us to the nearby environs of the Huntington Art Museum and Botanical Gardens, a frequent destination in the artist’s childhood and a major influence on her aesthetics. Here the flâneuse and her dog encounter spectral sculptures looming over dense thatches of pink and green. Neoclassical in both style and subject matter, they harken to an era when American titans of industry asserted their newly aristocratic pedigrees through the shorthand of classical civilization. These figures, which once populated the mansion of the museum’s namesake, have been thus disgorged, transformed from private property into public art. Given the historical centrality of art in establishing wealth and status in this upstart nation, the small transgressions of Brown’s flâneuse—filching both images and inspiration from sumptuous surroundings—provide a vicarious thrill.

Courtesy of the artist and GAVLAK