David Richard Gallery presents Fourth Dimension, a solo exhibition by Dean Fleming (born 1933, Santa Monica, California) focused primarily on seminal paintings from 1965 that evoked myriad changes in not only the artist’s approach to painting, including the scale, compositions, and pallets, but also where he produced and exhibited these works in the late 1960s and throughout his career. 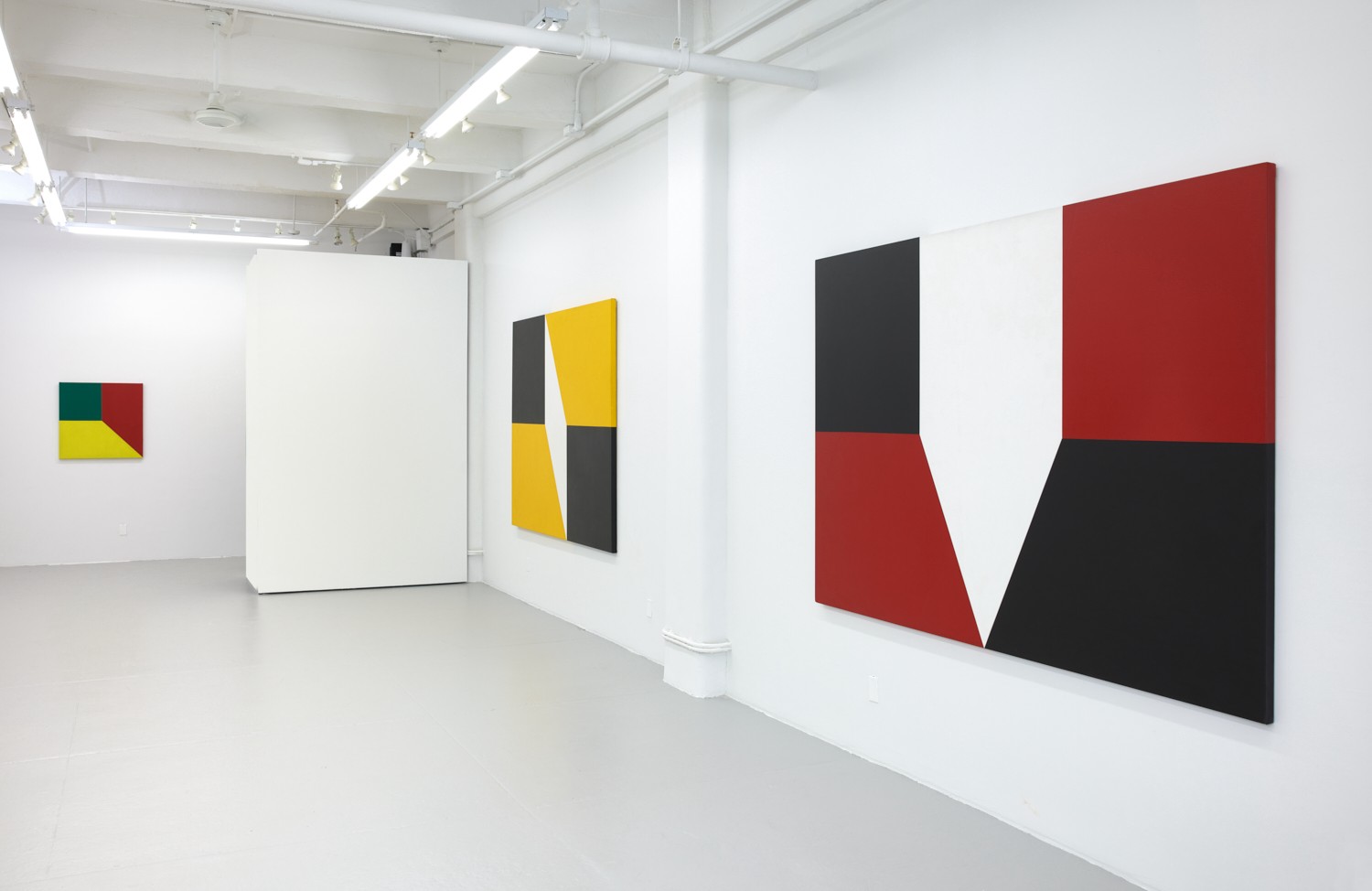 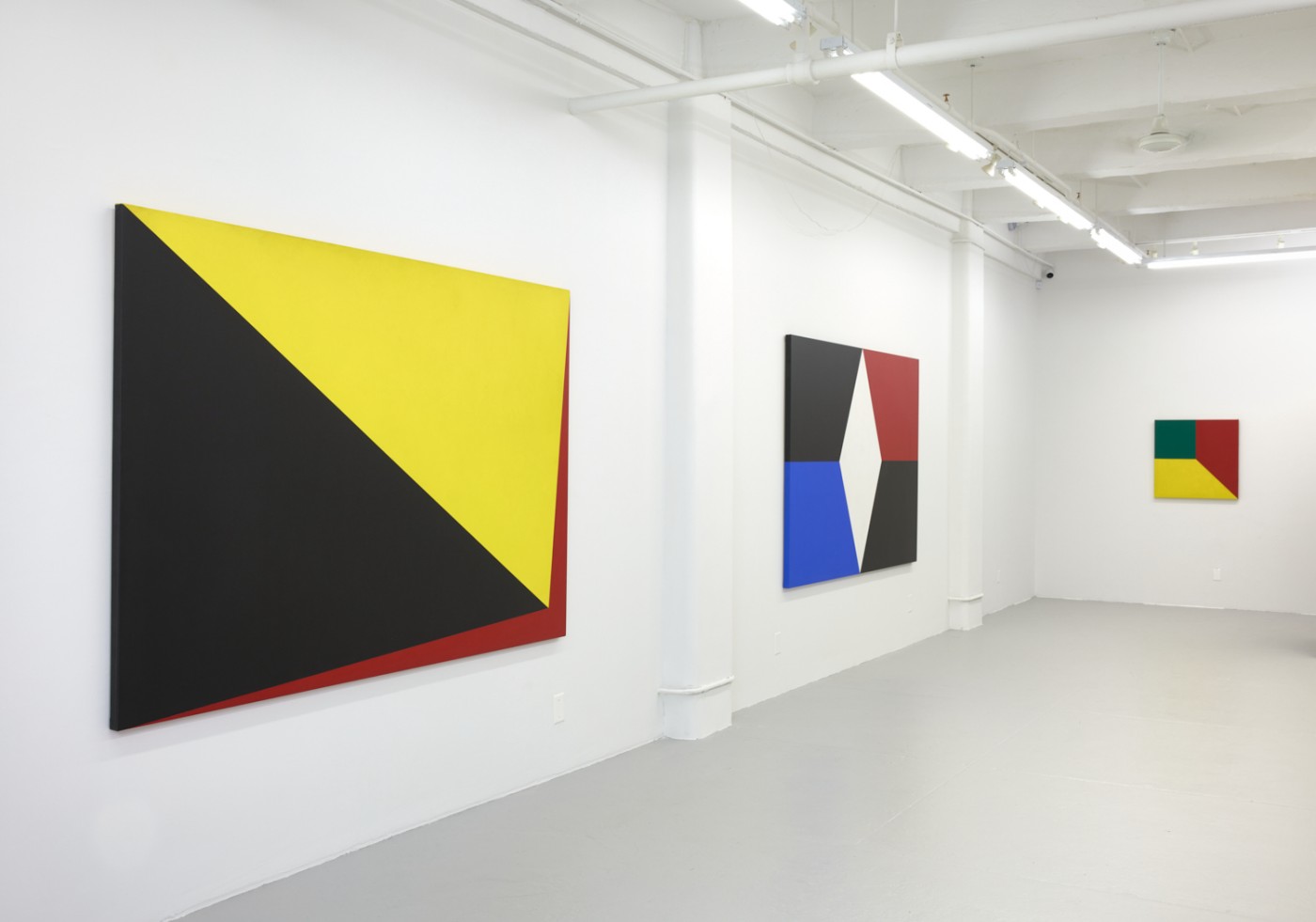 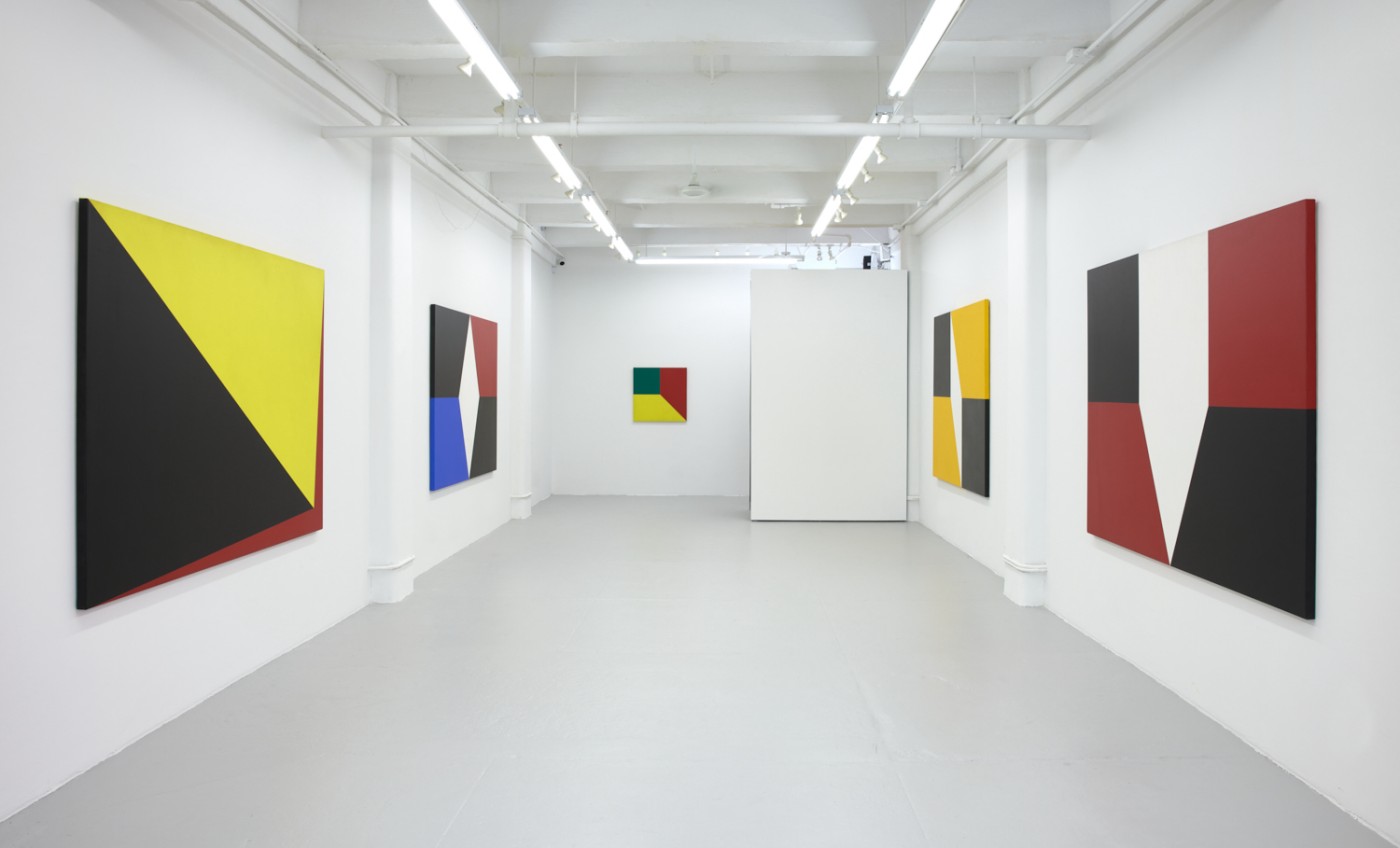 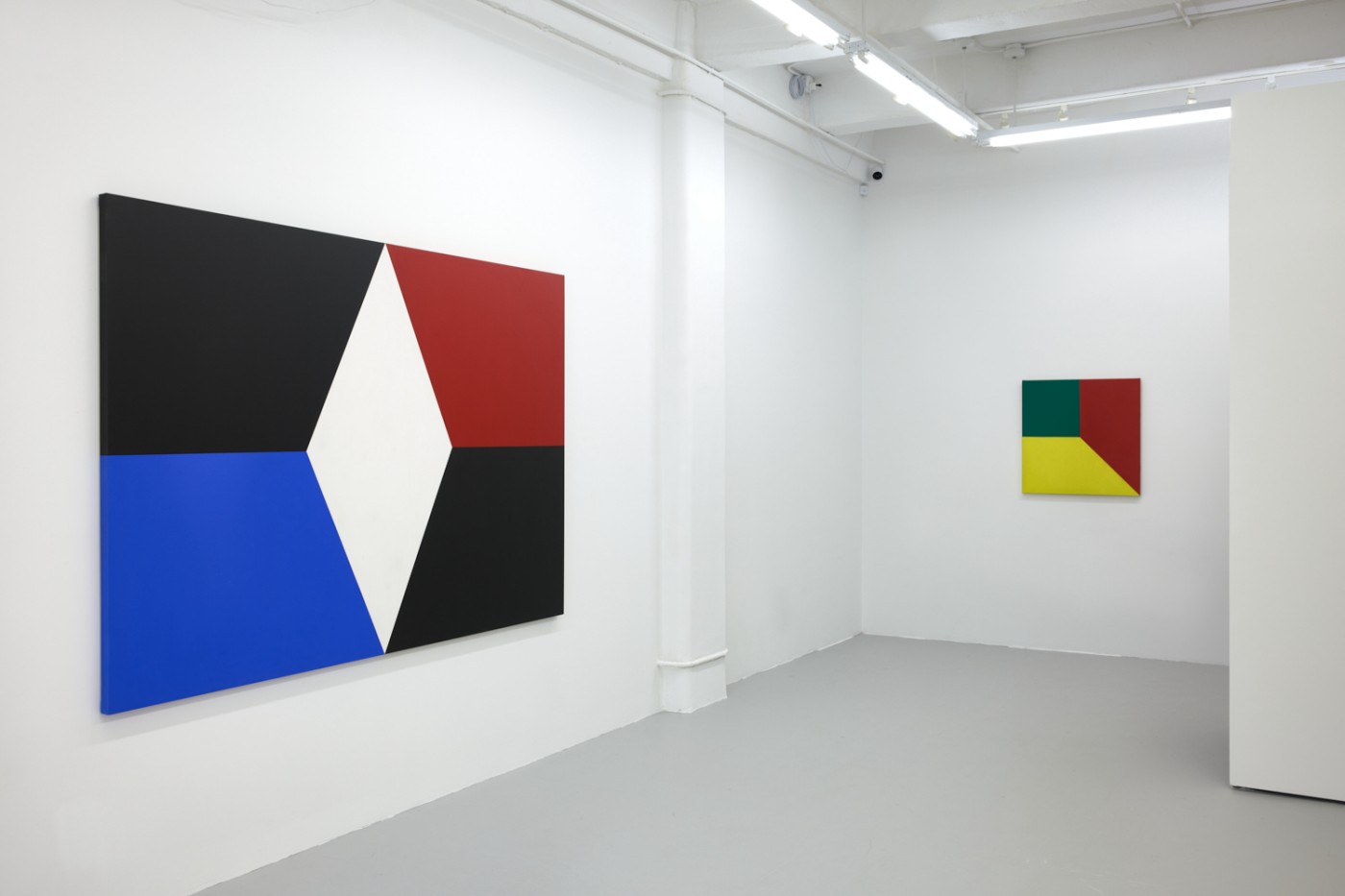 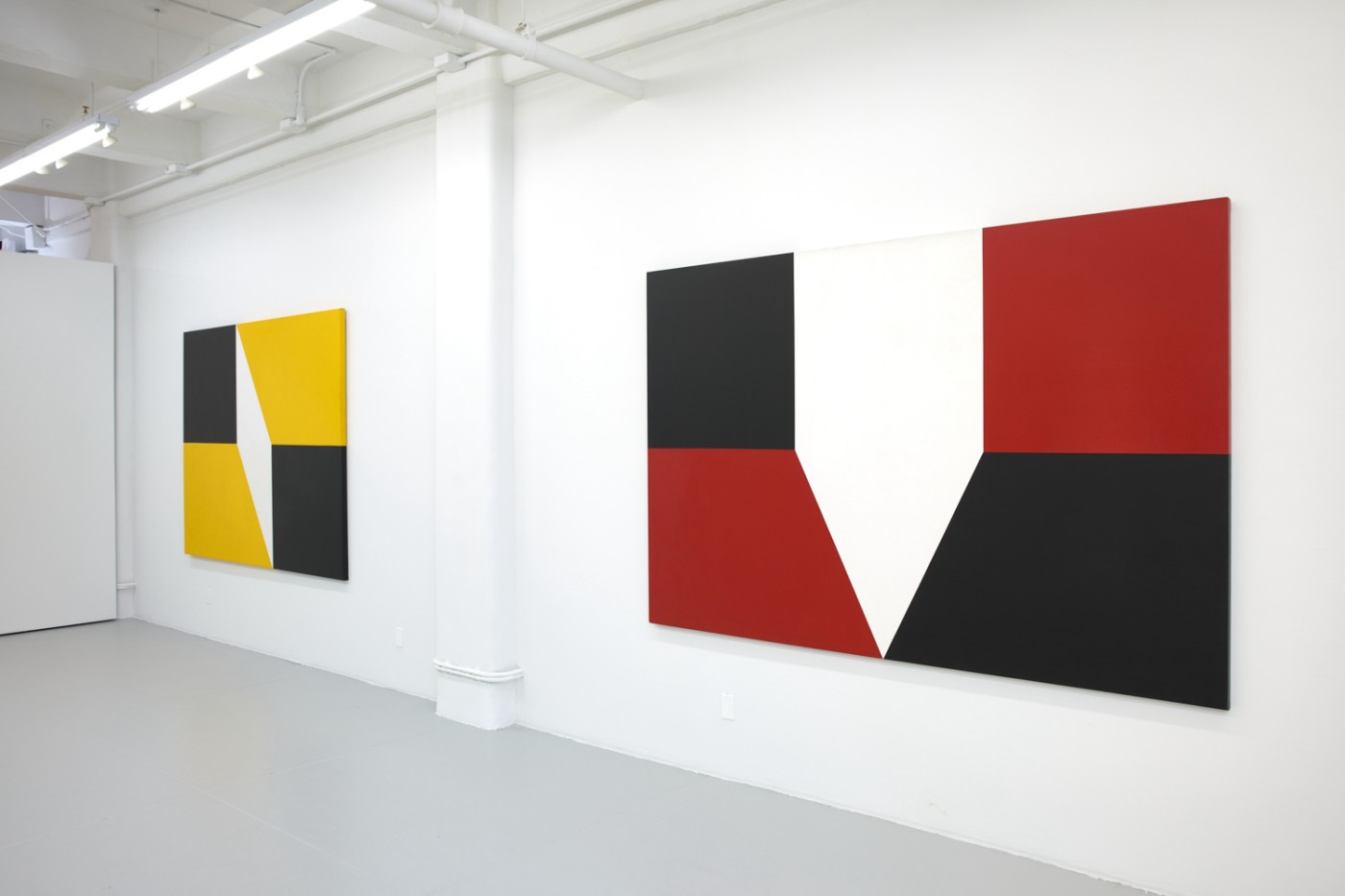 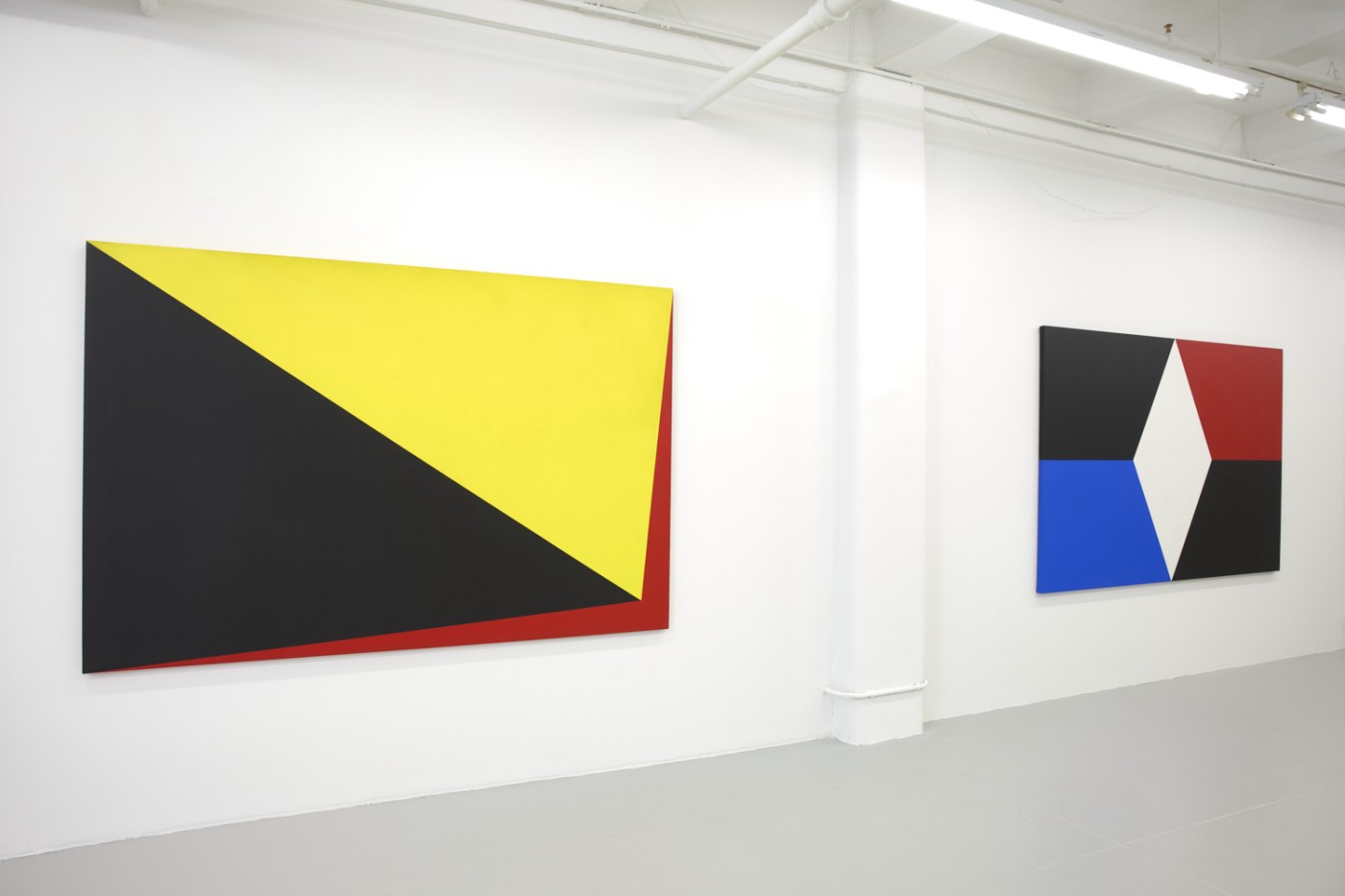 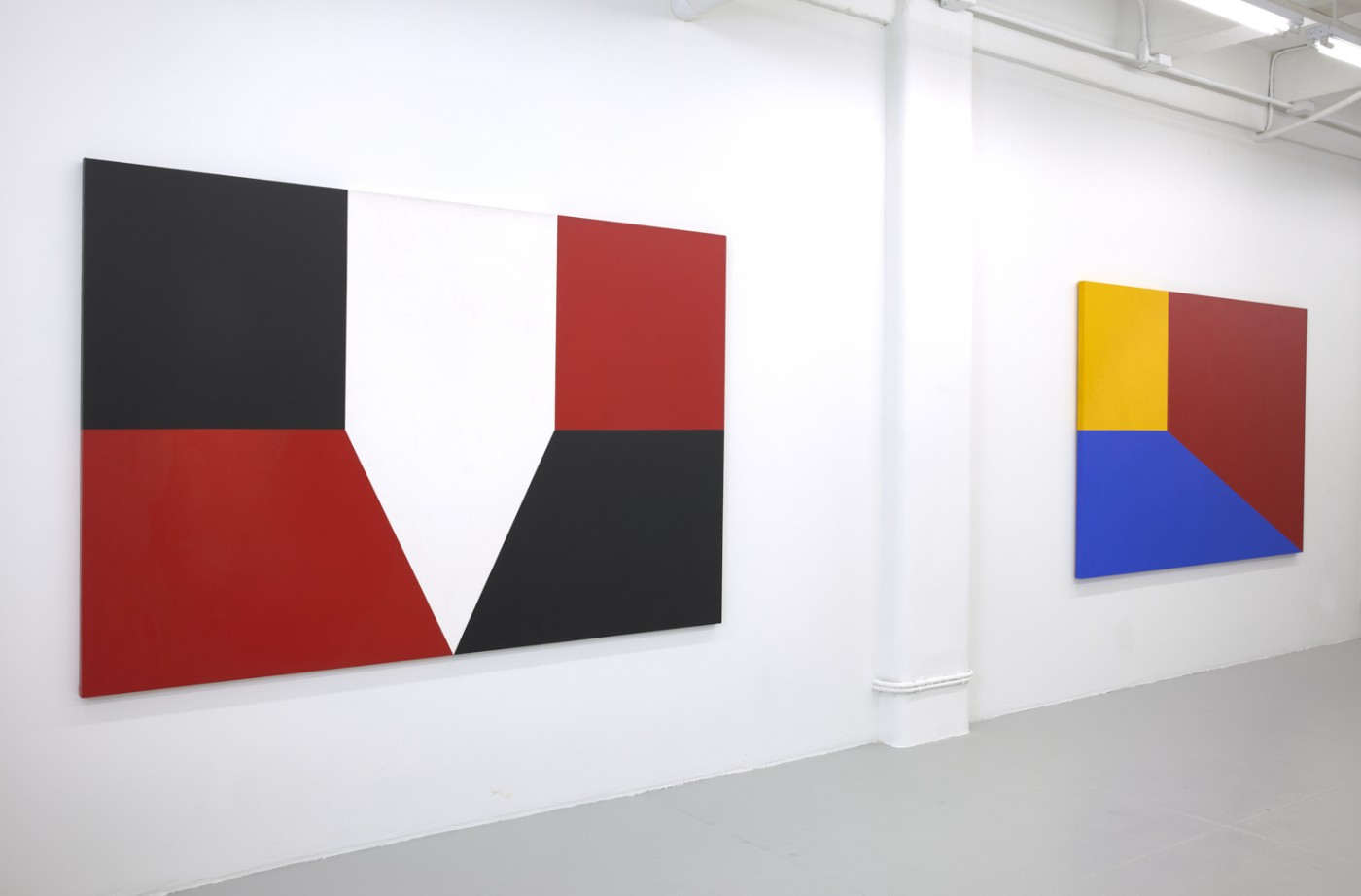 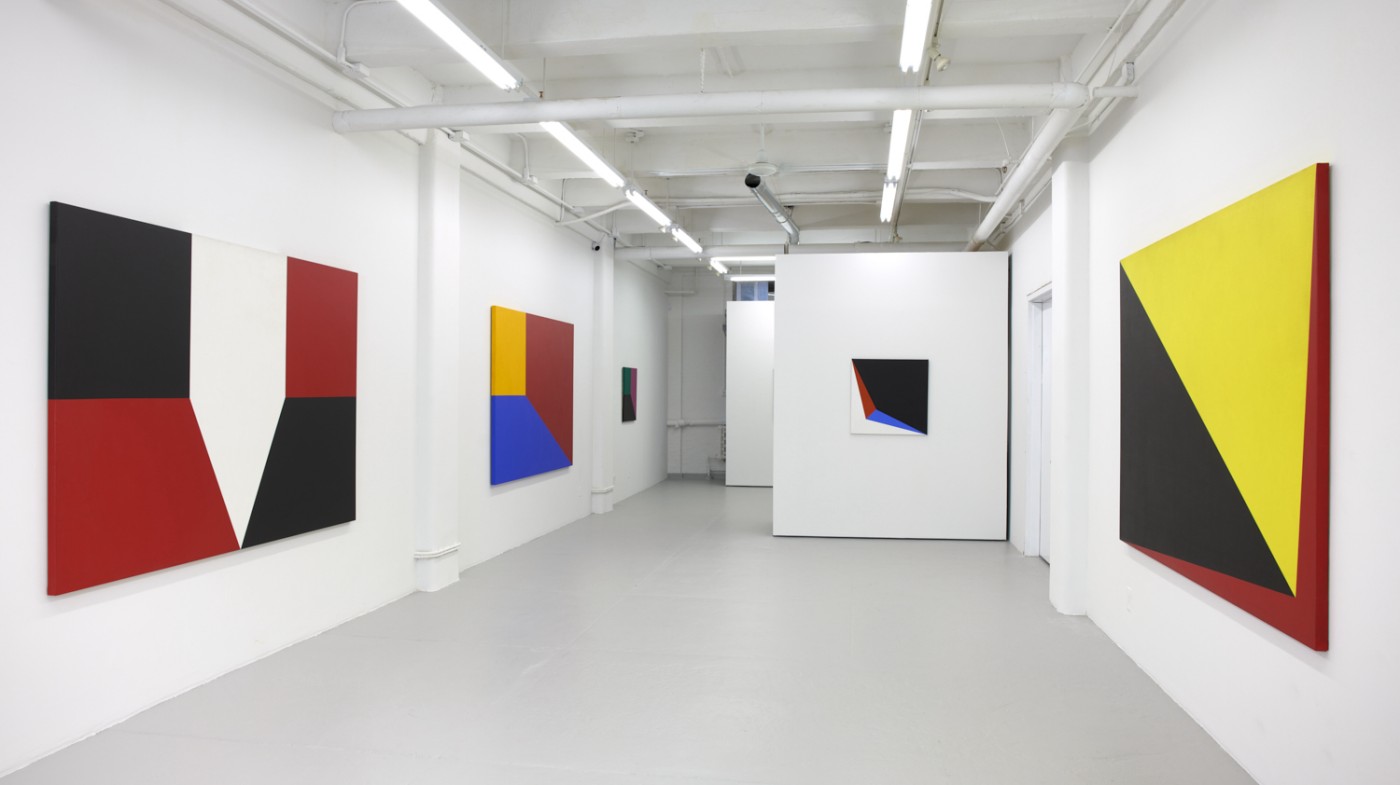 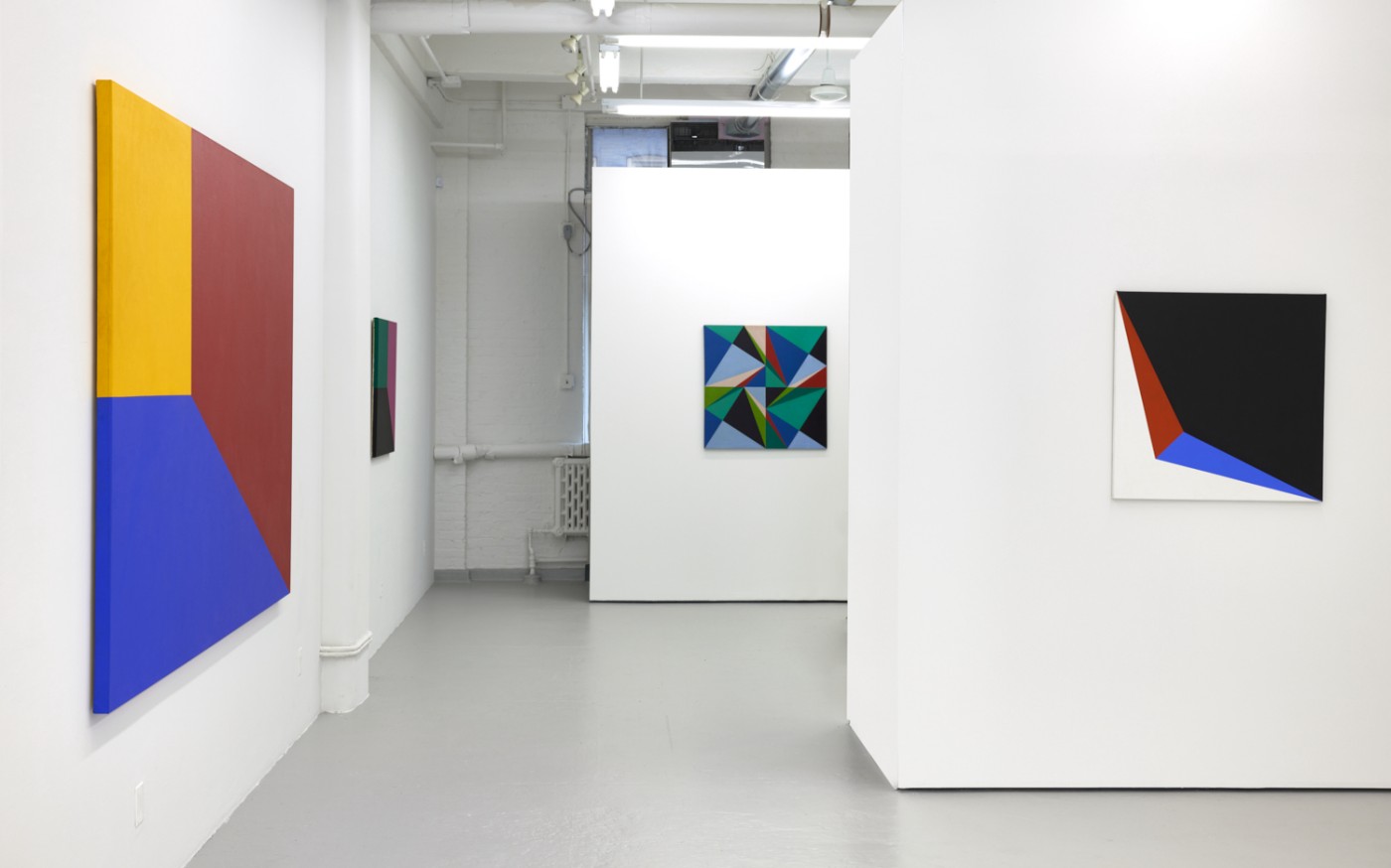 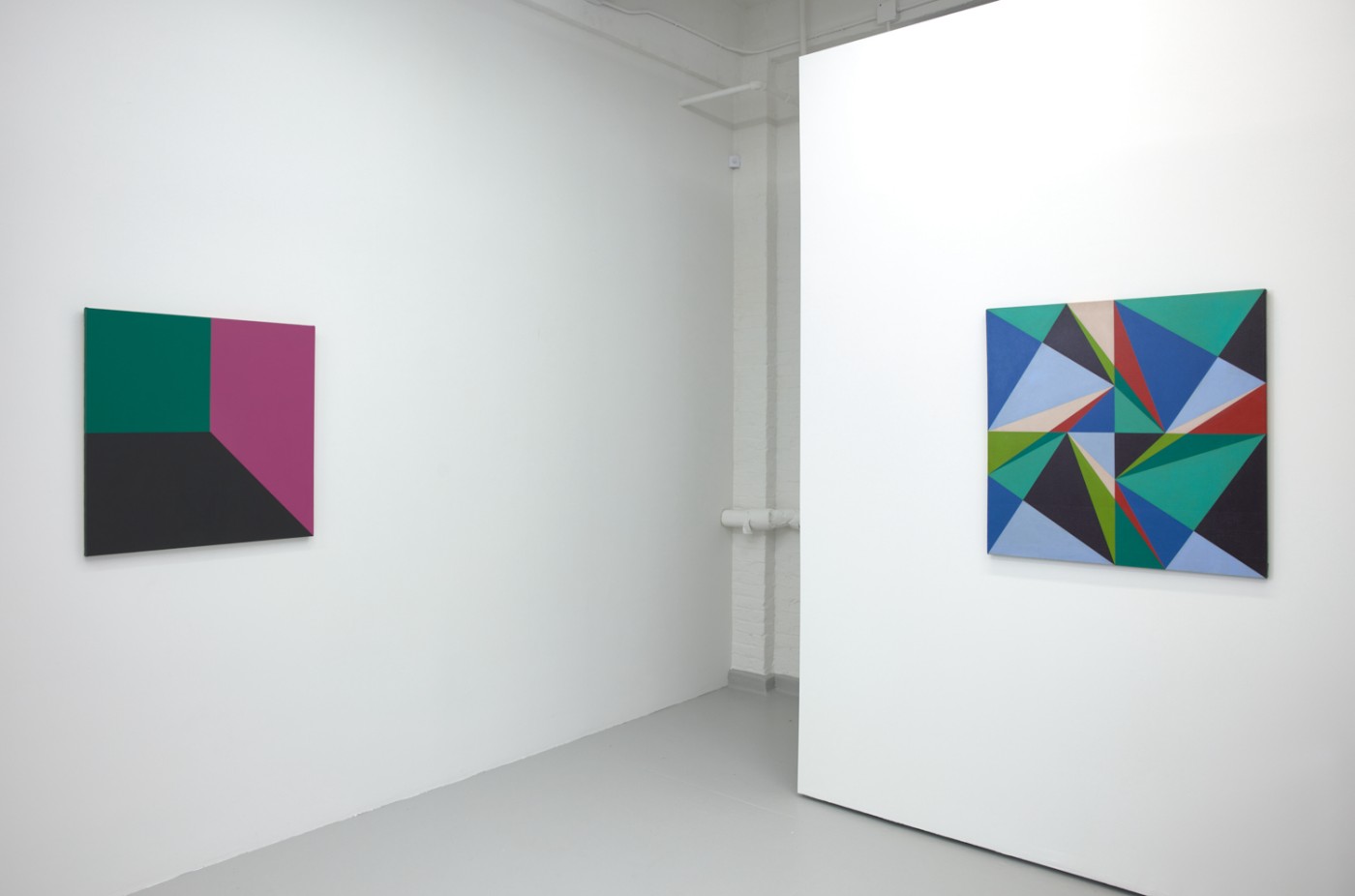 This is the first presentation of these important paintings in over fifty years, all sourced from the artist’s studio. Artworks from the prior year, 1964, are presented as a reference and contrast to emphasize the aesthetic and conceptual shift in Fleming’s studio practice by 1965.

The transformative change in Fleming’s aesthetic during 1964 and 1965 is best characterized as a move from rigorously geometric tessellations and colorful patterning to more reductive, hard edge compositions with minimal palettes and extreme vector angles rooted in both formal and conceptual concerns noted below.

The current presentation, Fourth Dimension, includes ten canvases from 1965: five large (mostly 70 x 90 and 65 x 100 inches in horizontal orientations) and five smaller (32 x 32 inches square) as well as six representative artworks from 1964: two paintings on canvas (82 x 82 and 44 x 44 inches installed on the diagonal as diamond shapes) and smaller gouache paintings on paper (roughly 4.5 inches square to 4 x 6 inches) as a comparison and contrast between each year.

The paintings from 1965 were originally presented in New York at Park Place Gallery in lower Manhattan in a two-person show with Dean Fleming and Tony Magar that inaugurated the new location on West Broadway. Fleming’s very large painting, 2 V Dwan 2, 1965-66, an orange, blue, black, and white acrylic painting comprised of three canvases, each 99 x 66 inches with overall dimensions of 66 x 297 inches, was presented in the exhibition Systemic Painting, organized by Lawrence Alloway at the Solomon R. Guggenheim Museum in New York in 1966 and published in the corresponding catalog. The painting was named for Virginia Dwan, an early enthusiast, patron and supporter of Fleming and other founding members of the Park Place Gallery. That same painting was then exhibited in 1967 at the Friends of Contemporary Art in Denver, Colorado and purchased by a Denver collector. The painting is now in the collection of the Fort Wayne Museum of Art in Fort Wayne, Indiana.

A subset of Fleming’s paintings from 1965 were also presented in 1973 in a solo exhibition at Wilamaro Gallery located in Denver, Colorado. The gallery was run by Carol Schwartz-Steinberg, the daughter of Vera List, an art collector, who alongside Virginia Dwan, Allen and Betty Guiberson, J. Patrick Lannan, and John and Lupe Murchison, financed Park Place Gallery in exchange for receiving artworks annually from each of the founding members. List acquired one of Fleming’s paintings from that Denver exhibition, which eventually ended up in the collection of the The New School in New York City.

Many of the paintings from this series of works from 1965 were acquired and placed in many museums and private collections. Snap Roll, 1965, originally acquired by James Michener along with another painting acquired by Betty Blake, are now both in the collection of the Blanton Museum in Austin, Texas. Larry Aldrich acquired two of the paintings for his museum in Ridgefield, Connecticut. Other notable collectors of Fleming’s artworks include: Arthur Ashman, Paula Cooper, Mark diSuvero, Carl Groos, Jack Stuart Kern, Frank Sinatra, among others.

Dean Fleming’s Paintings and Progression to the Fourth Dimension:

The inspiration for Fleming’s move to the open, hard edge and minimalist compositions in 1965 had been brewing for quite some time. He had a deep interest in understanding the complexities of, and picturing, space in multiple dimensions on a two-dimensional canvas, and was fascinated by the concept and potential of the Fourth Dimension. Both concepts were also long held interests of the founding artist members of the Park Place group, which brought the group together initially in California and later when they formed the collective and exhibition space in lower Manhattan.

Aesthetically, Fleming’s paintings from 1965 were influenced by the linear and geometric artworks of Josef Albers from the 1940 and 50s, in particular, his drawings and Structural Constellations, respectively. Using the greatest economy of means and producing many compositions in just black and white, Albers created in a two-dimensional picture plane illusory images and compositions, suggesting spatial depth and three-dimensional objects floating in space, thus, challenging visual perception. Fleming took note and began reducing the complexity of his own compositions, specifically, the elements of form and color. Eventually breaking them down to just a clean line and a few points anchoring the compositions to the outer perimeter of the canvas. Thus, decreasing the number of shapes and colors in his compositions.

Another visual influence on Fleming’s work by 1965 was the revelatory contemporary paintings of Al Held from the early 1960s, the Concrete Abstractions. Held was focusing on reductive, geometric paintings comprised of bold shapes and sweeps of vibrant colors as he eschewed his Abstract Expressionist and gestural mark making from the past.

Collectively, Albers and Held, among other influences, propelled Fleming to change the complexity and direction of his compositions. In a recent conversation (with David Eichholtz on September 18, 2022), while looking back at the art scene in New York in and around 1965, Fleming noted two contributions that his then recent paintings made to that “scene”. First, he stated, “These paintings [from 1965] are not pictures and not illustrations of something else, they do not represent anything other than what they are. The paintings were intended to be complete and entirely contained within the perimeters of the canvas, anchored to the outer perimeter. There was no ground, no voids, they were not floating in space.” Regarding the second point, he said, “Another significant contribution of these paintings is they were shifting and dealing with illusion, but were simple compositions that oscillated between a flat, almost graphic quality one minute and then flip to something optical and three-dimensional the next, depending upon the viewer and their perceptions. This was in contrast to the Minimalism artists who sought no emotion, no illusion and no content.”

New York City’s tearing down of Park Place to make way for the building and development of the World Trade Center afforded an opportunity for larger studio and exhibition spaces to accommodate Fleming’s, and other members of the Park Place collective, austere, larger and visually challenging newer artworks. Thus, precipitating Fleming’s move to Broome Street for his studio and relocating the Park Place Gallery and artist collective to West Broadway (currently SoHo).

The Fourth Dimension is a complex and highly debated concept amongst scientists as well as artists. Simply put, the debate falls into 2 basic categories, it is either explained in spatial or non-spatial terms. What that means is the “spatial” approach can be articulated in geometric terms—it is a dimension beyond height, length and width. The hypercube is the most common way to consider and picture the concept spatially. The “non-spatial” approach considers time to be the Fourth Dimension, which involves space-time continuum. Fleming sides with the “spatial” approach described and pictured in geometric terms, which aligns better with Buckminster Fuller and his studies in Vector Equilibrium, 4-dimensional space, Non-Euclidean geometry, and geodesic domes. It also aligns with the writings of Linda Dalrymple Henderson and her examinations of the Fourth Dimension in art (MIT Press, 2013, Linda Dalrymple Henderson, The Fourth Dimension and Non-Euclidean Geometry in Modern Art, Revised Edition, originally published in 1983). In discussions with Fleming and as a practical matter, the artist’s concept at the time in 1965 was that “every additional dimension had to be perpendicular to the preceding one.” In other words, progressing from the first-dimension as a line, the second is the flat plane, and third is the cube. The fourth is yet another dimension and the debate between the interested parties.

Fleming’s approaches through 1965 did not move into Non-Euclidean geometry with curved spaces. Instead, he explored extreme vector angles with limited hues and values that effectively divided the quadrants of the square canvas like a multi-dimensional cubist shape spinning in space, revealing either another dimension, or simultaneous views of the same structure, or shadows of the singular structure interacting with the original cube-like structure. As the alternate profiles are viewed simultaneously, or if the painting alludes to the structure moving from one quadrant to the other, the four quadrants collectively seem to create a spiraling cube-like structure emerging out of the flat picture plane toward the viewer. The seemingly fragmented and slivered edges combined with different colors and values create long shards that suggest dimensionality to the overall structure and each side in different planes, thus systemically transforming the initial cube-like form into a multi-dimensional structure. This is best considered while viewing the following paintings in order from: Tunis, 1964 to Papados, Greece, 1964, then Broome Street, 1964; 65 Purple, 1965; West Broadway, 1964; Untitled (1965 Green), 1965; to 65 Black, White, Red, 1965. These works map the progression from geometric patterning to working with isolated cubes, then in quadrants, to spiraling, and finally simplifying the complexity of compositions and colors to provide the suggestion and essence of space and multiple dimensions to gain greater viewer engagement.

After considering Fleming’s inspiration for the important series of paintings produced in 1965 as well as the aesthetic and conceptual influences in the compositions, it is interesting to look back at his artist statements from 1965 and 1966 published in the catalog for the Systemic Painting exhibition noted the following (Alloway, Lawrence , Systemic Painting, 1966, Guggenheim, p23 ):

I am working in the area of the totally primal and available.

Geometry, optics, science and psychology are here used only as tools and, therefore, have only a relative bearing on the significance of the work. [. . .]

In an effort to clarify the subject I have used only straight lines.

Most of these paintings can objectively be defined by saying that they are composed of one or two points within the canvas and the connection of these points to the outer edges.

This approach to the work yields nothing whatsoever and we must venture further to reach significant under- standing. [. . .]

I use color because of its relativity to the human eye and believe in color and not color dogma.

Formally they contain the tensions and lucid changes that exist between the diagonal and the horizontal and vertical. We are already aware of the passivity of the horizontal, the ascension and descension of the vertical, and the dynamics of the diagonal. [. . .]

The subject of art is ultimately spiritual. That vibrant aspect of the nature of existence which demands to be created though it is not called for. Still this new work is utilitarian in that it serves to extend the consciousness of space and time, a necessity for the psychic survival of every new society. Now, when basic forms and primary colors have the strength and velocity to communicate a new dimension, it is the spirit of our times an artist expresses rather than the fact.