Skarstedt is pleased to present David Salle: Tree of Life, an exhibition of paintings from the artist’s ongoing series to inaugurate the newly reopened 79th Street gallery. 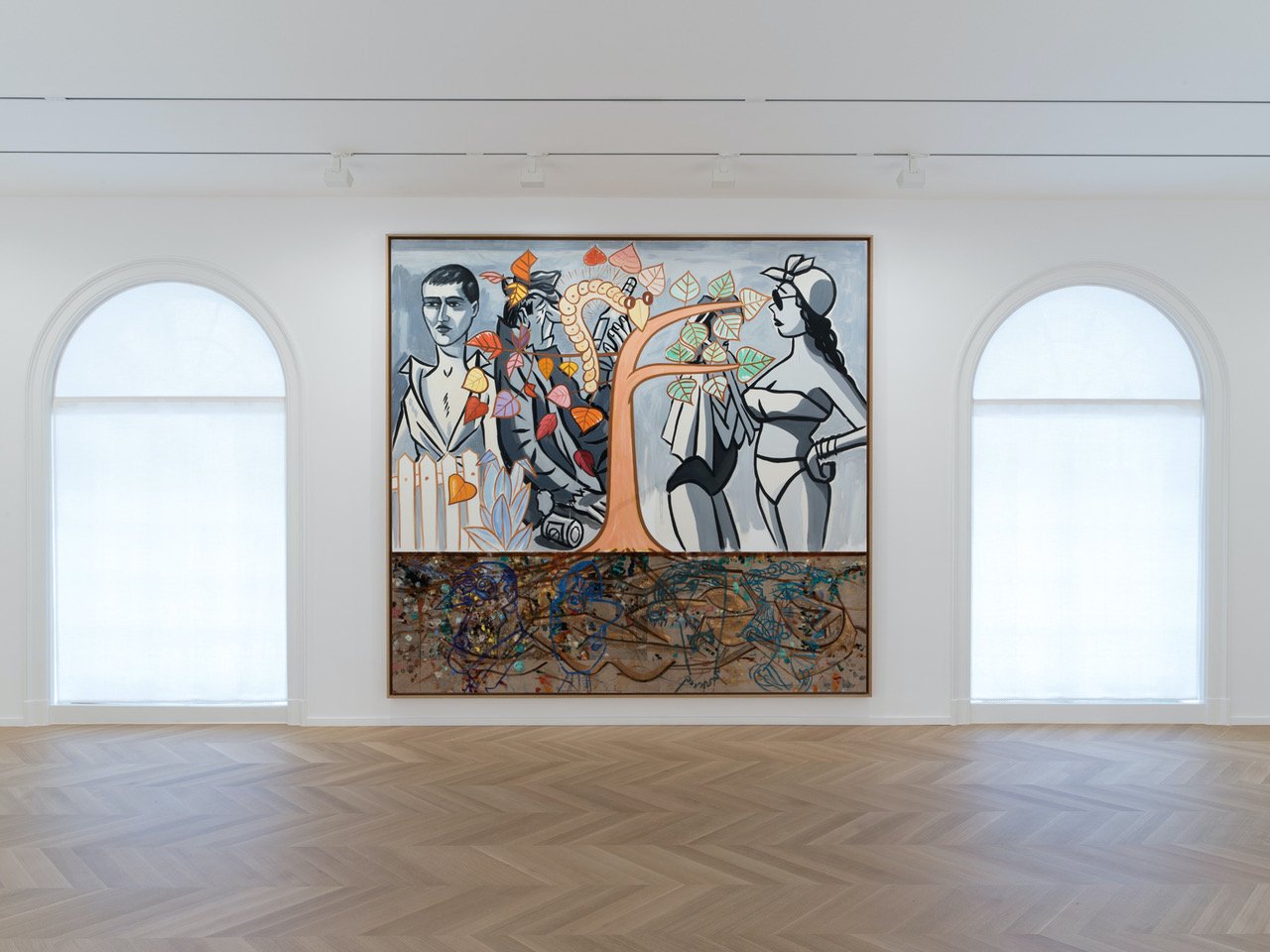 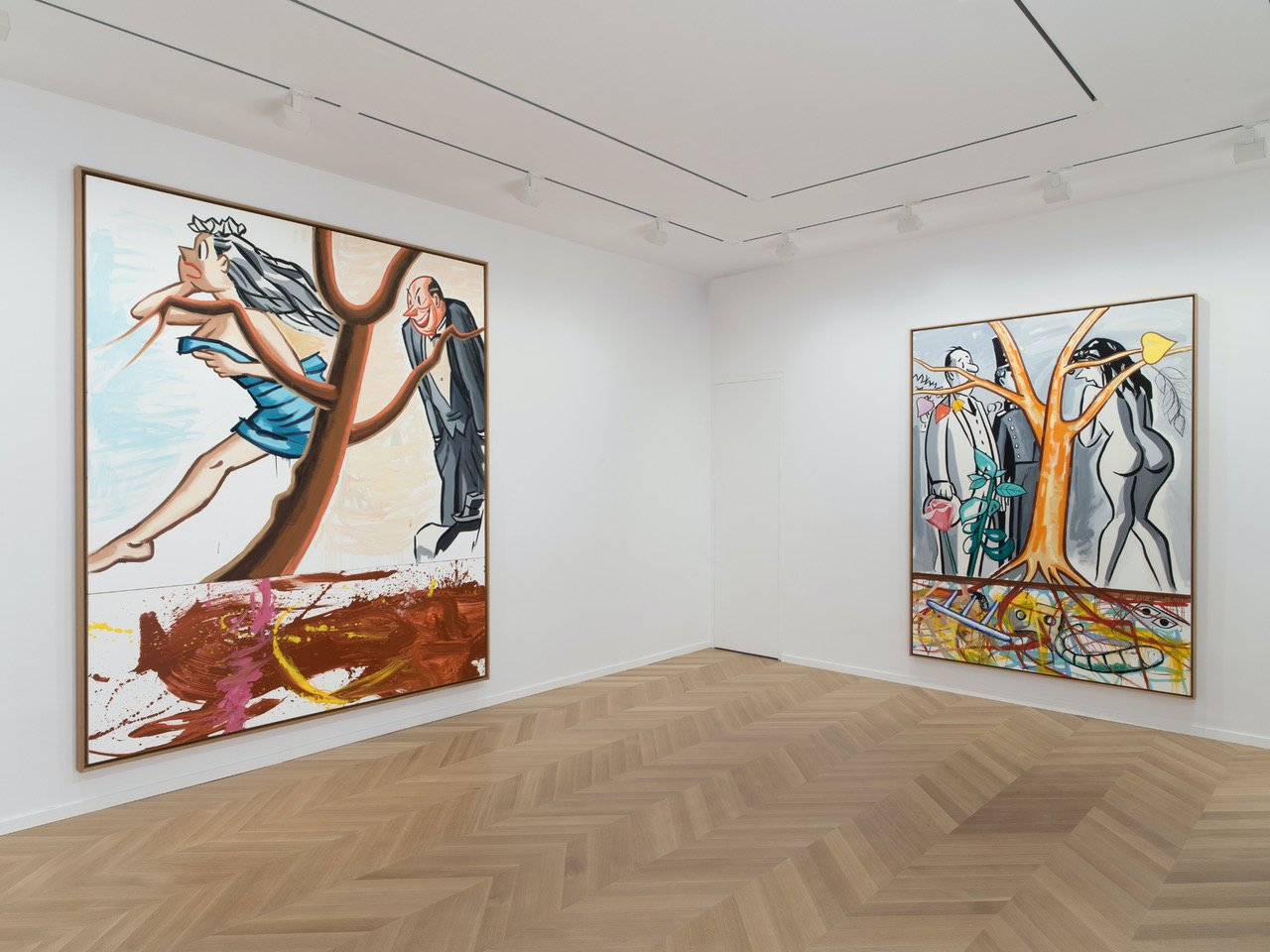 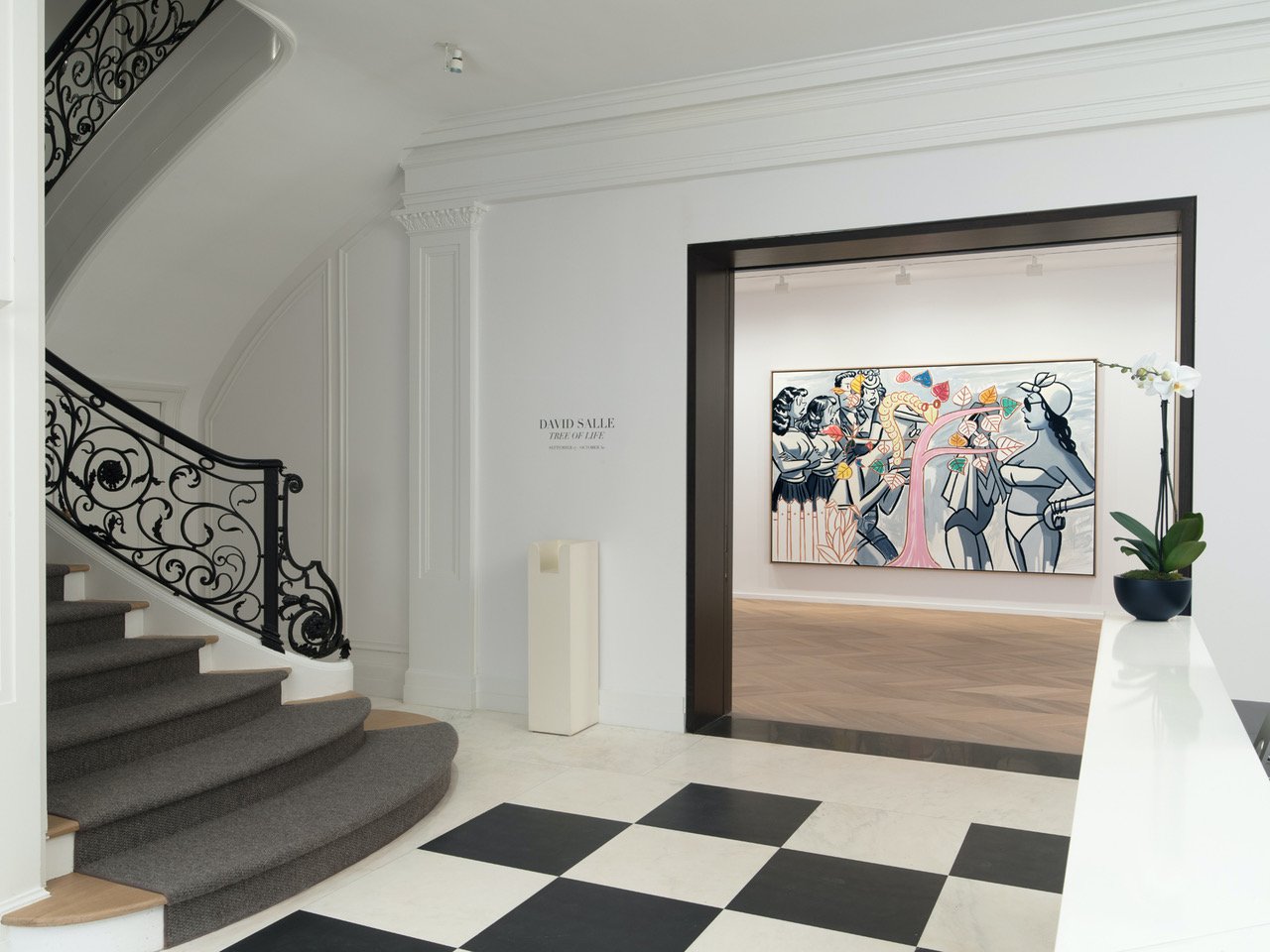 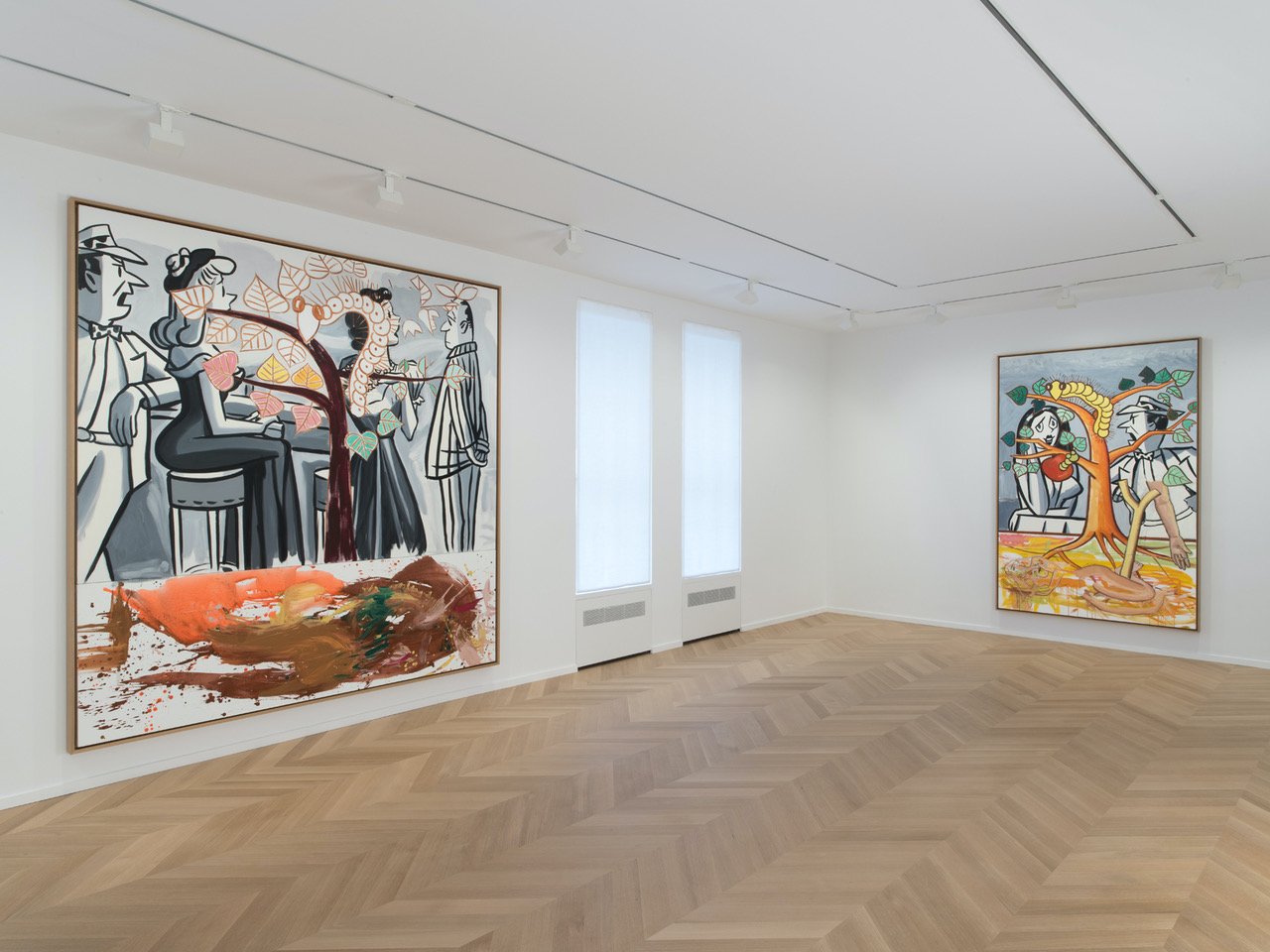 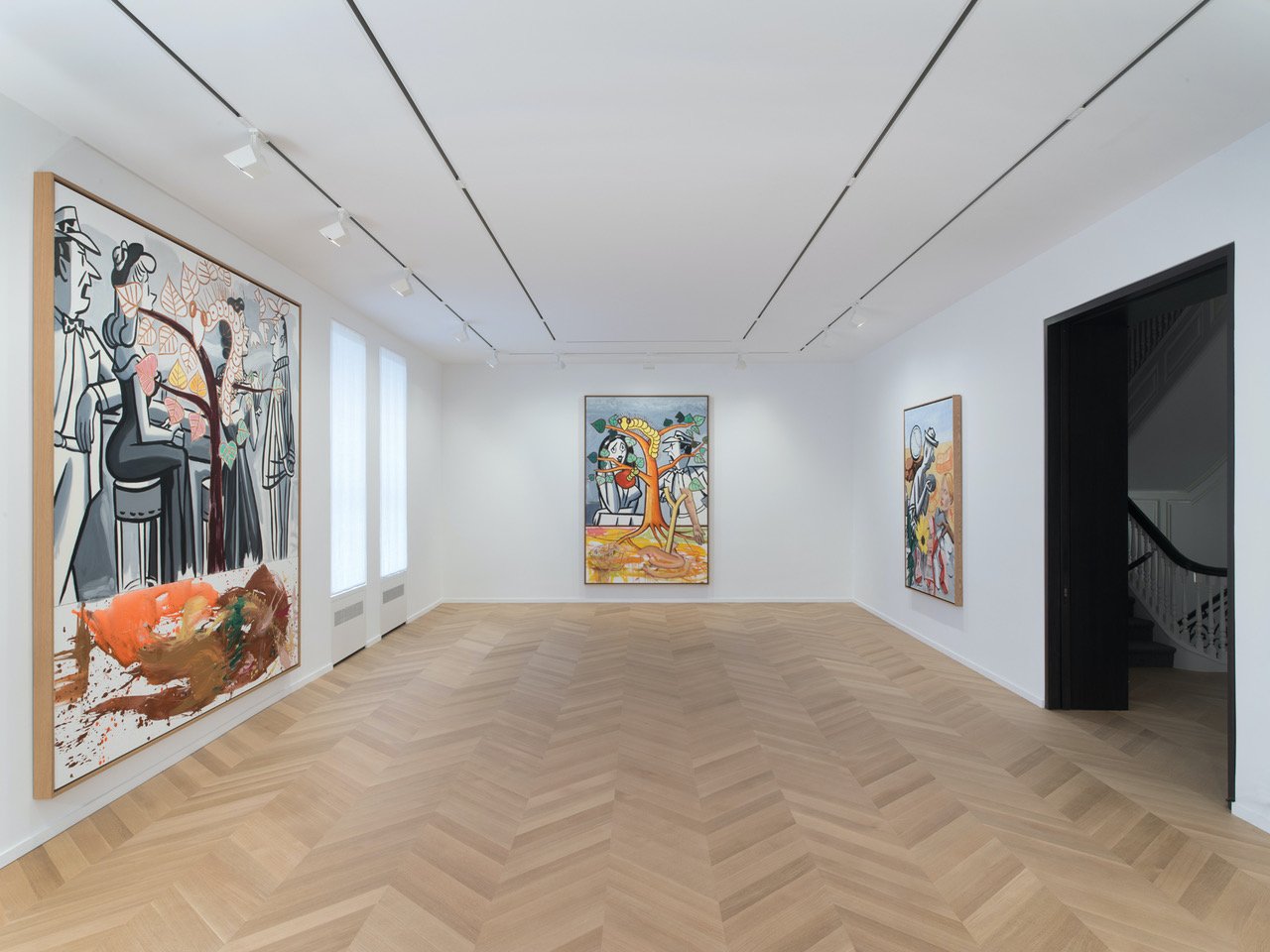 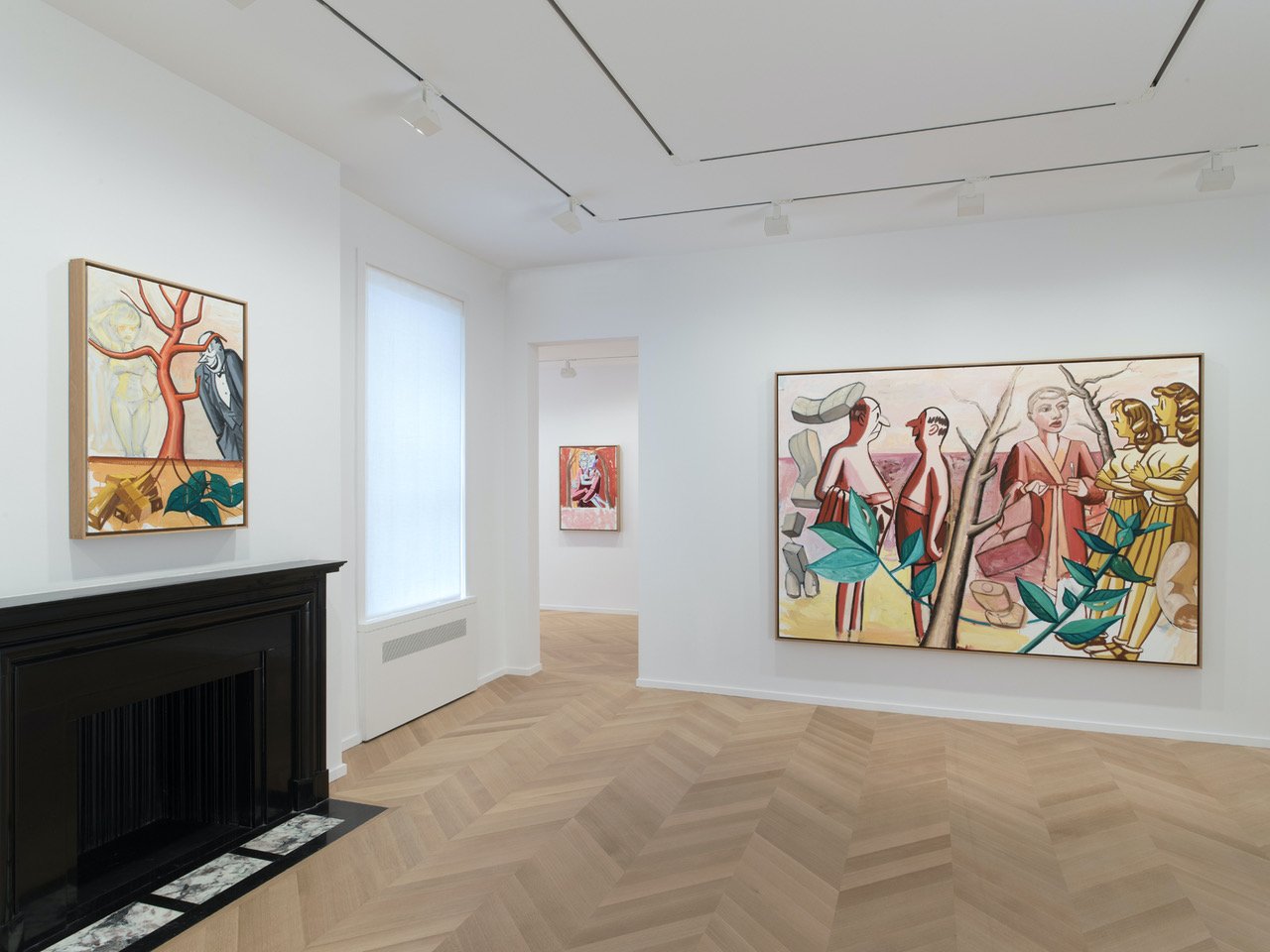 In the top panel of Salle’s thematically complex series, a stylized tree vertically bisects the picture plane. On either side stand male and female characters in poses that seem drawn from the world of screw-ball comedy. This upper panel sits atop another “subterranean” panel, long and narrow, that represents the roots reaching into the soil from which the tree draws its vitality. Salle creates a Garden of Eden, one rife with canonical symbolism and implied moral conflict – the scenes of juxtaposed protagonists inspired by the visual vocabulary of mid-century cartoonist Peter Arno. The portrayal of the male figures ranges from clueless, timid, or forlorn to over-confident or even predatory. The women are by turn guarded, apprehensive, unamused, or in flight. These dramatis personae, in their awkward separation and misapprehension, appear locked in some ongoing struggle, and are often tinged with a certain pathos. Some figures are obscured in a blur of paint; others have their faces covered by brightly colored leaves. The figures differ in how they are painted, some contained within their black outlines, while others – gestural and spontaneous – break free from their contours. Whether gestural or hard-edged, the figures are constructed from well-defined shapes of lights and darks that lock together like pieces of a puzzle. This elevation of value pattern, the orchestration of darks and lights has been a feature of Salle’s painting since the early 1980s. One of his innovations was to take the world of the printed page – the black, white and grey tones – as a subject.

Bisecting these theatrical vignettes is the tree itself. Varied in style, it is often painted in unnatural, high-key colors. In some paintings, the tree is barren, or infected by a large spiny insect – an equal actor in the malleable and multifaceted narratives. Toxic nature or just nature? In other paintings, the more naturalistic greens and autumnal palettes mix with pink, blue and purple, as the leaves draw from their sources underground. Salle creates surprising color harmonies that co-exist, and at times collide with the grisaille palette of the figures.

The lower panels serve as visual counterpoints to the action above ground. These panels represent certain art historical ‘roots’, the idea of the subconscious, and that thing which to a certain extent influences us all – the past. Here, Salle reveals what is normally un-seen or un-acknowledged; he gives us a cut-away view of intertwined motifs and references, some baroque or cubistic, others lyrically abstract. A recurring motif is the image of a ladder that bridges the divide between the upper realms and the ‘under-world’. The past is still with us, these paintings seem to say. This is how we got here. A metaphorical excavation of the bottom panels resembles the way we come to understand the present by looking at events of the past, a universal experience to which Salle has given literal visual form.

Unlike Salle’s early work, which tended to avoid narrative closure, the works in this series tell many stories. Binding together disparate pictorial languages with his customary wit and musicality, Salle compounds the narrative potential of his figures to produce a complex yet legible mode of storytelling, The viewer’s own engagement with the scene is also an element in Salle’s structural approach to pictorial meaning.