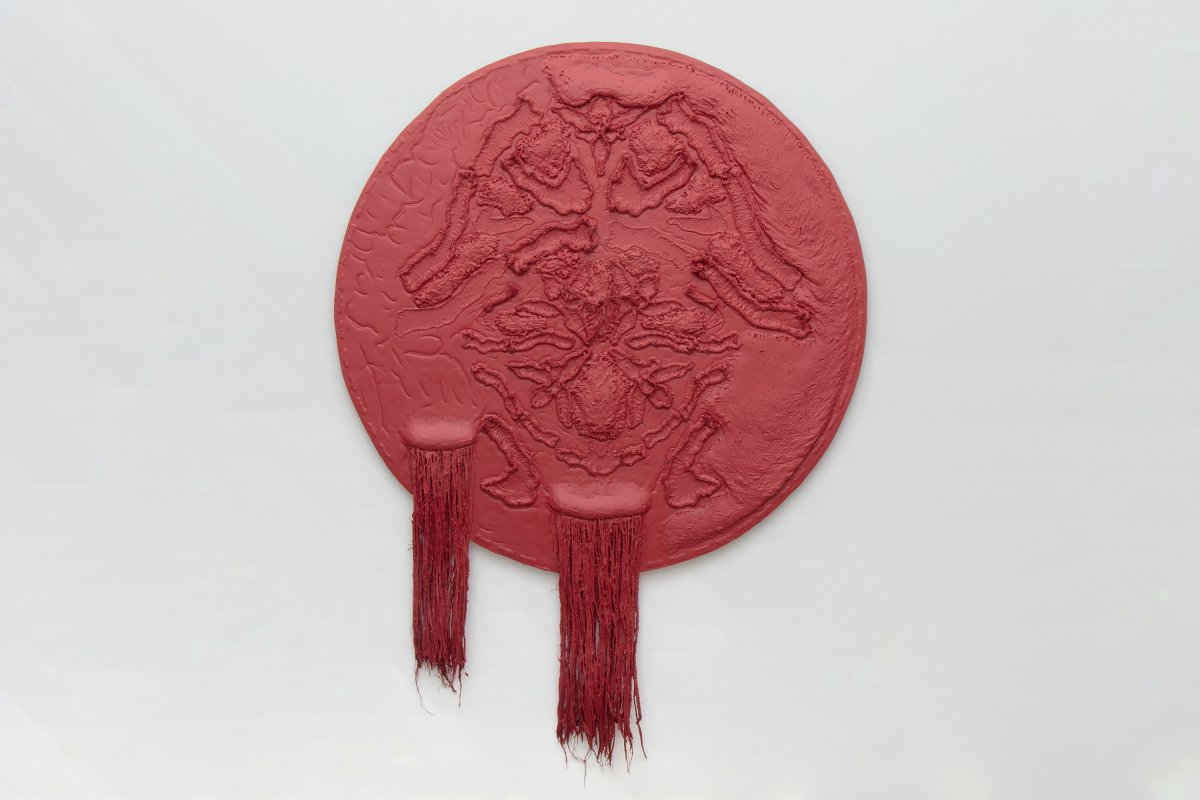 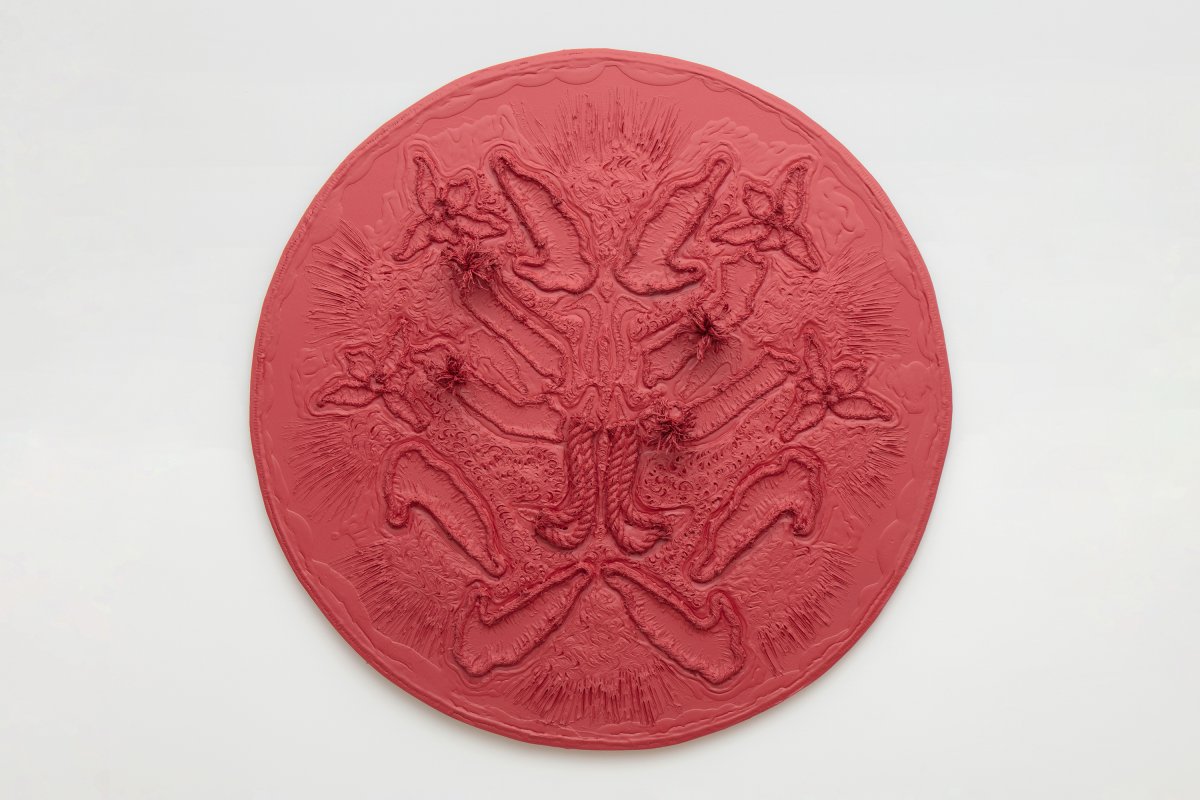 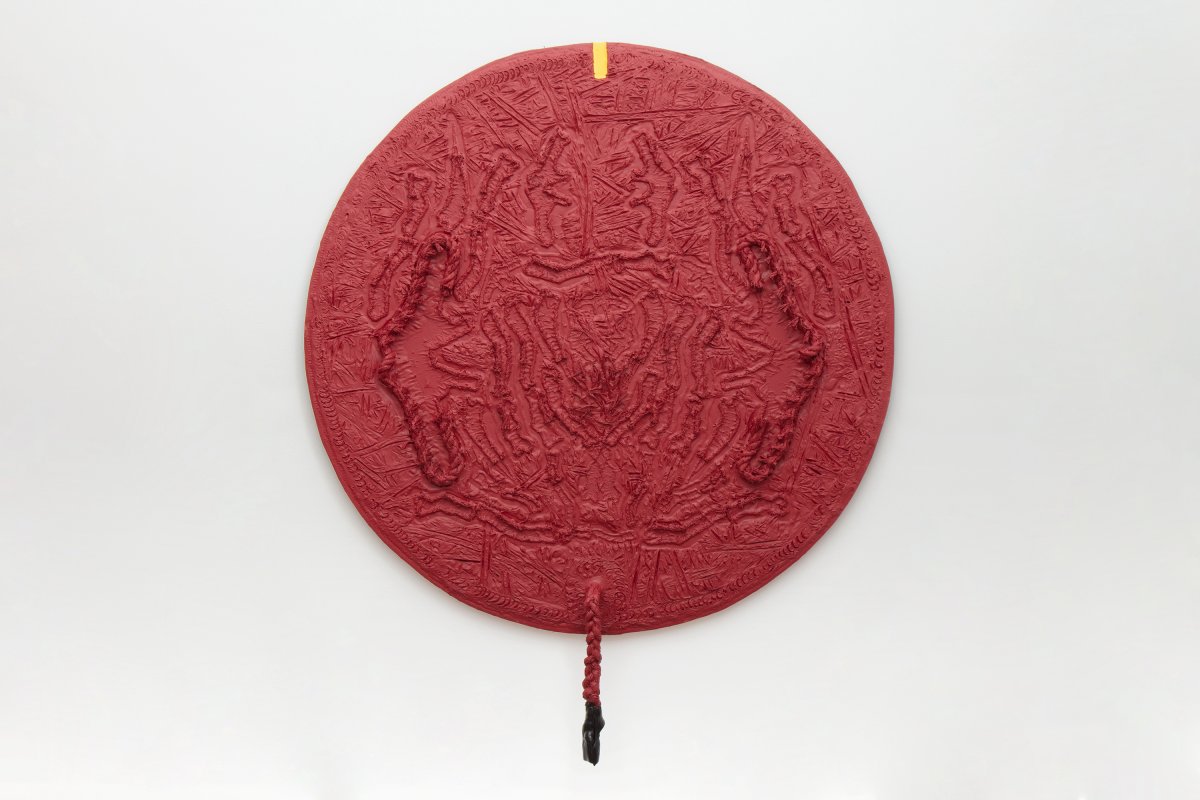 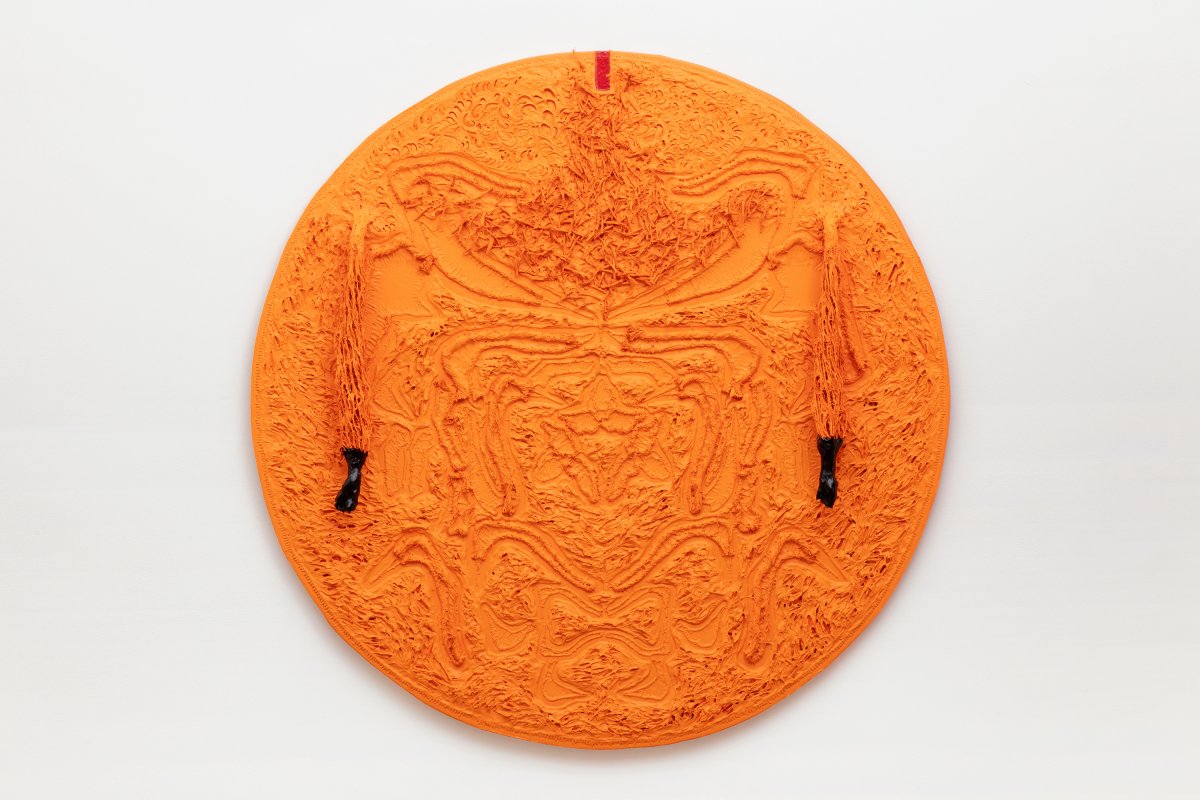 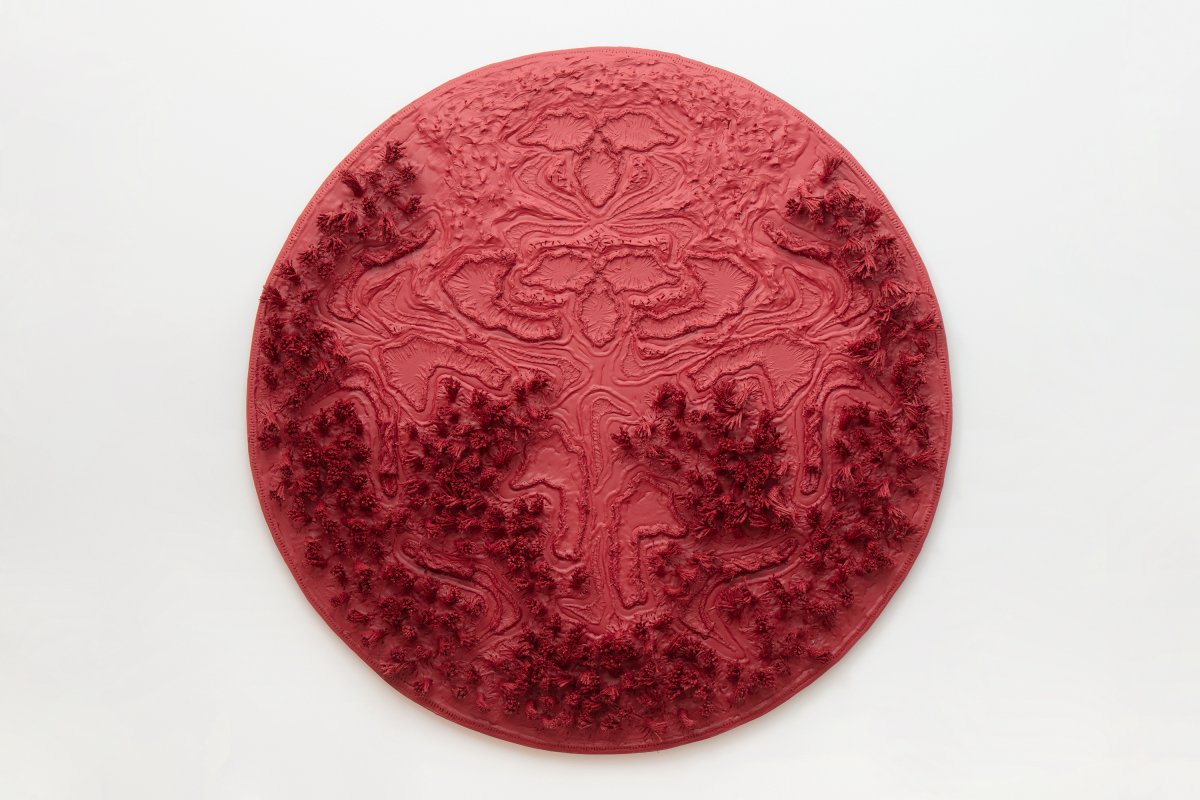 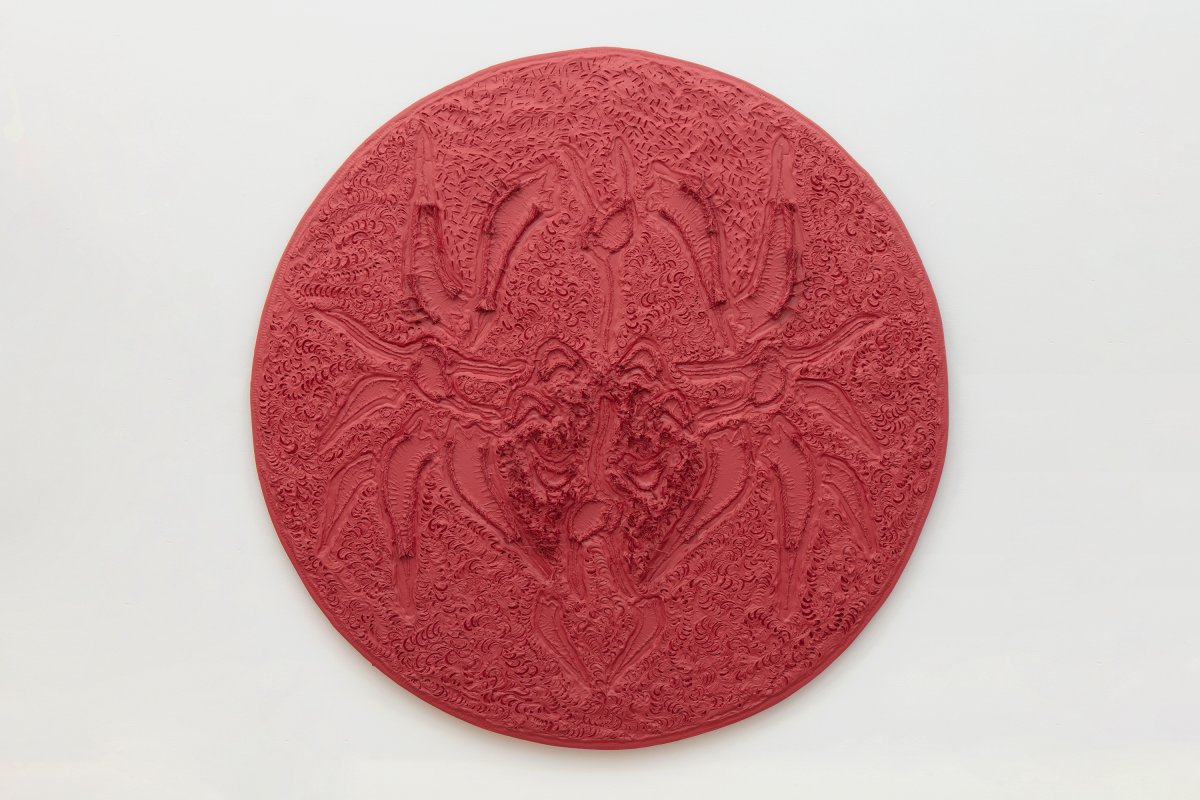 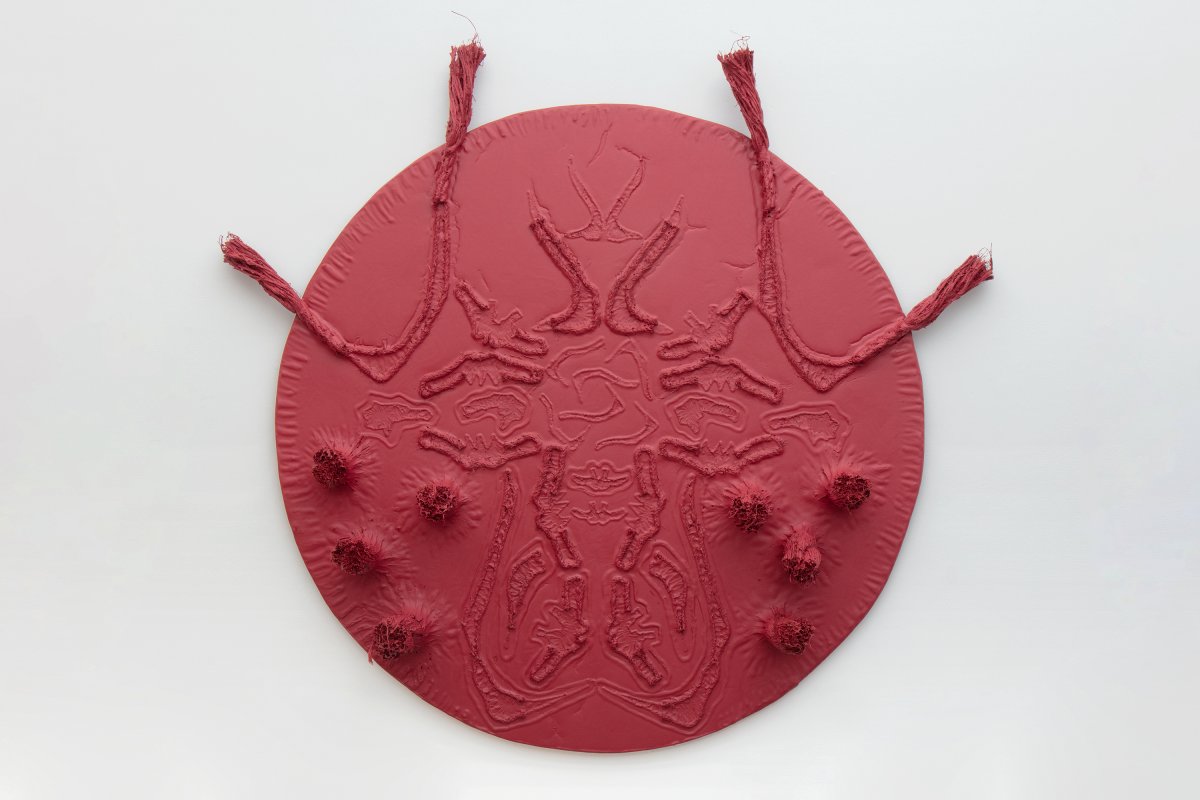 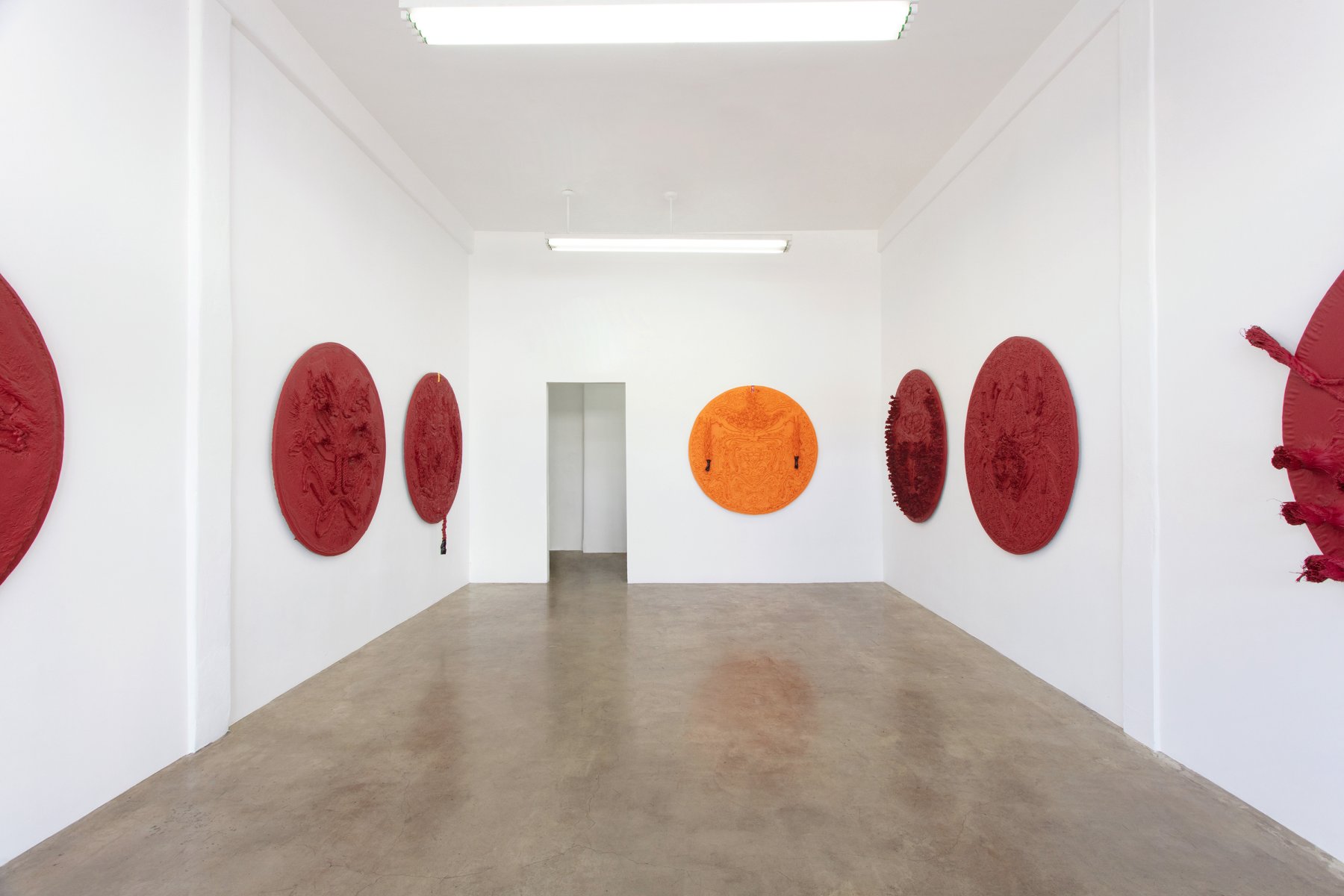 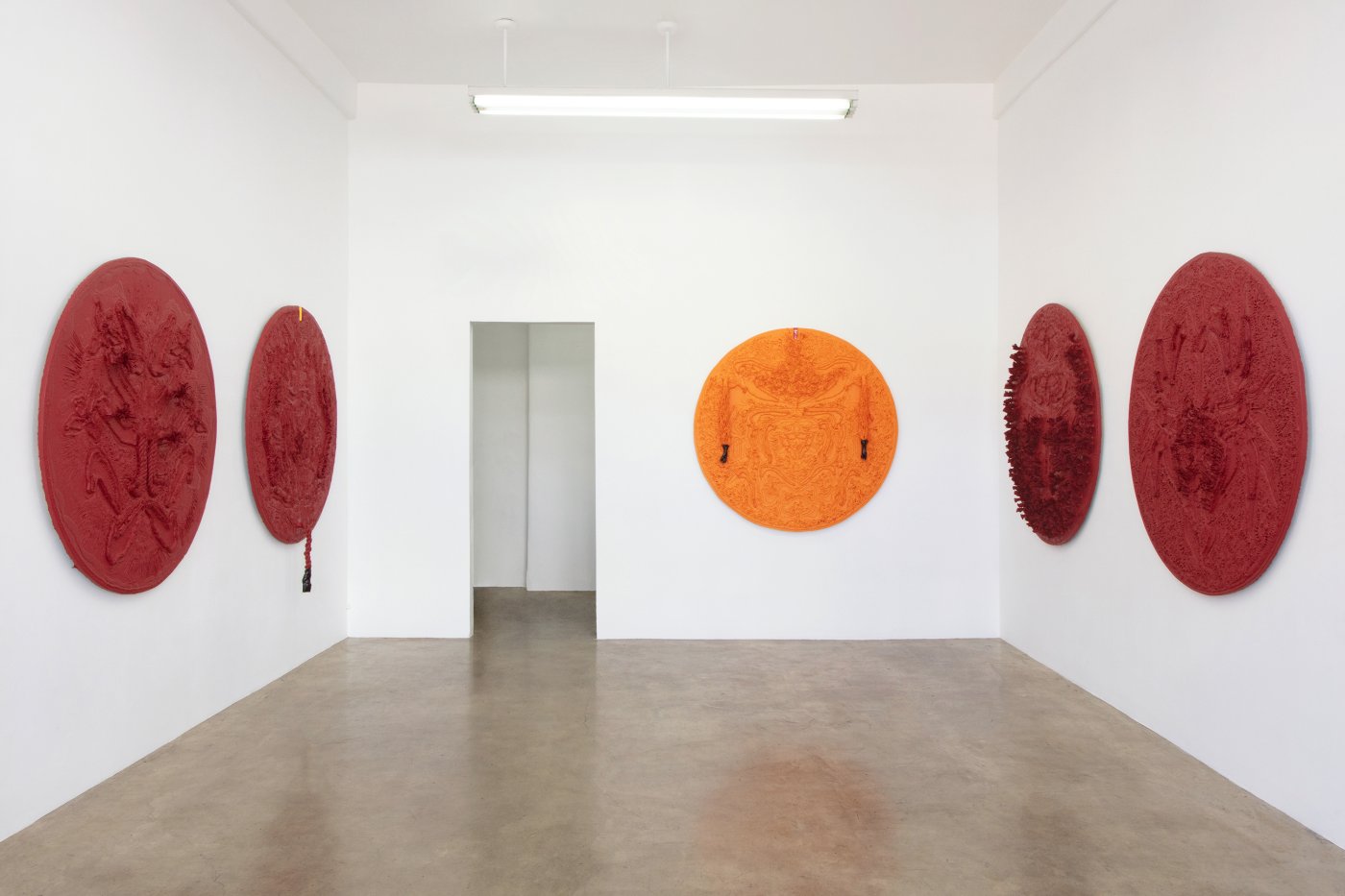 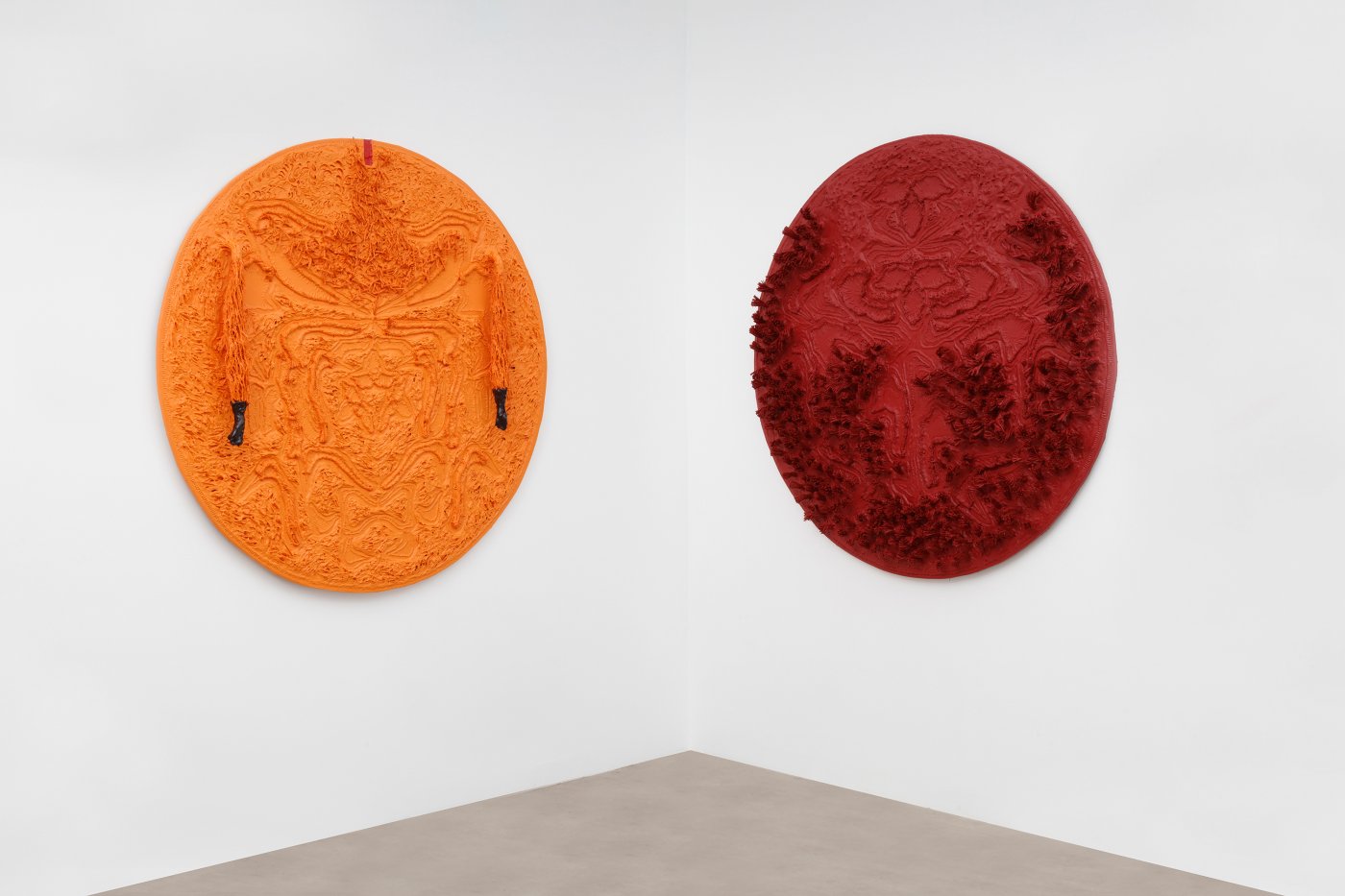 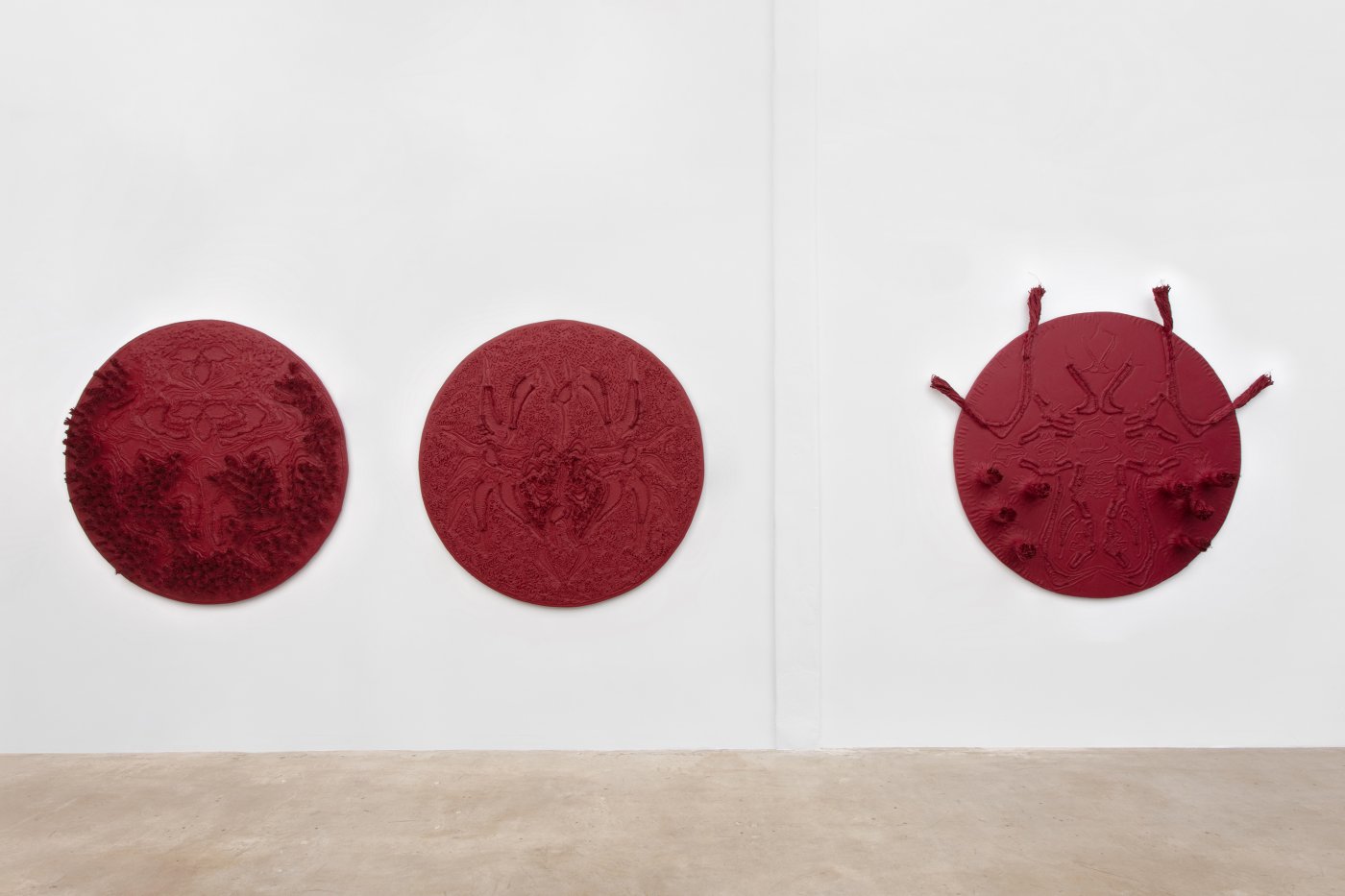 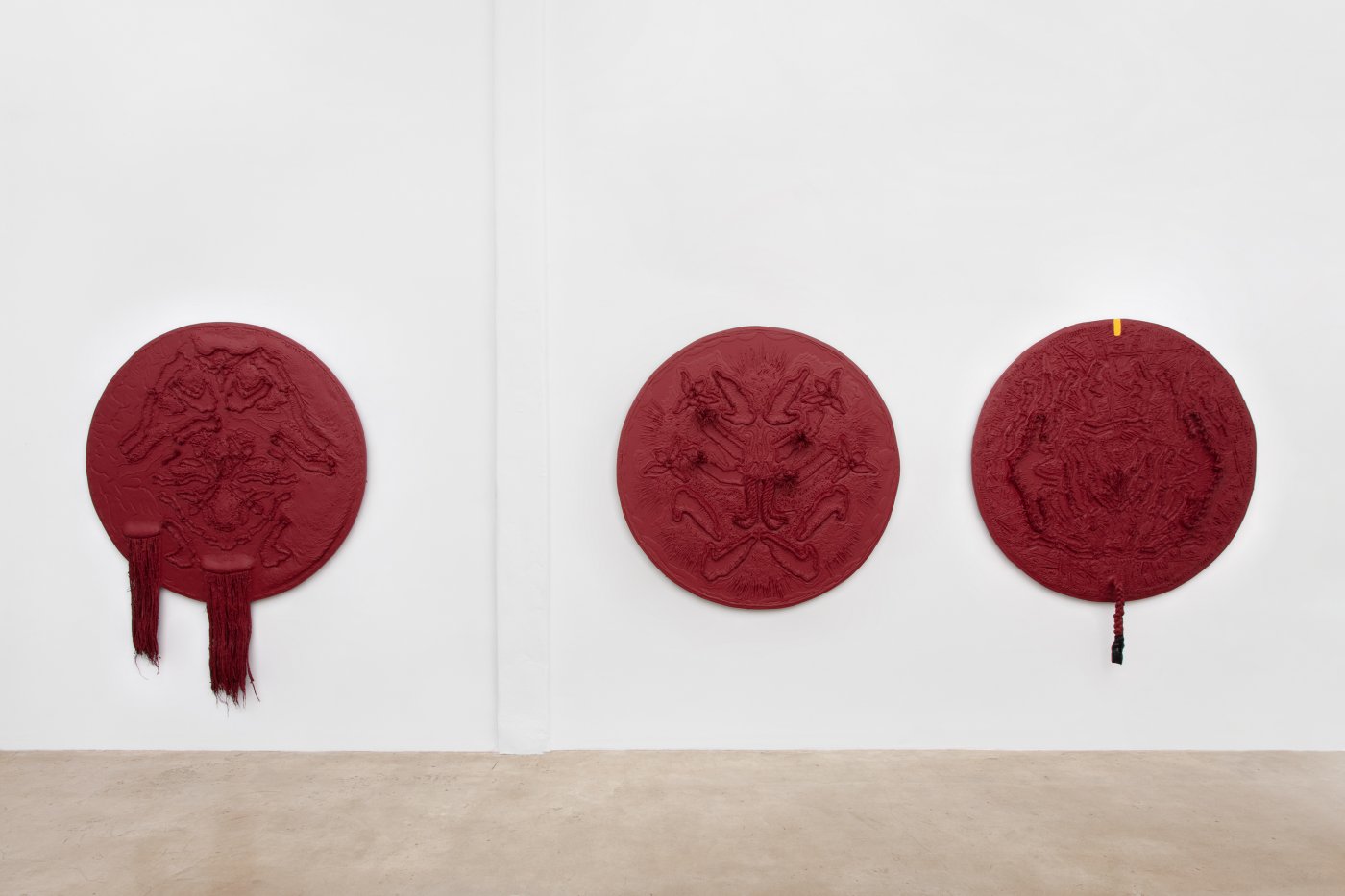 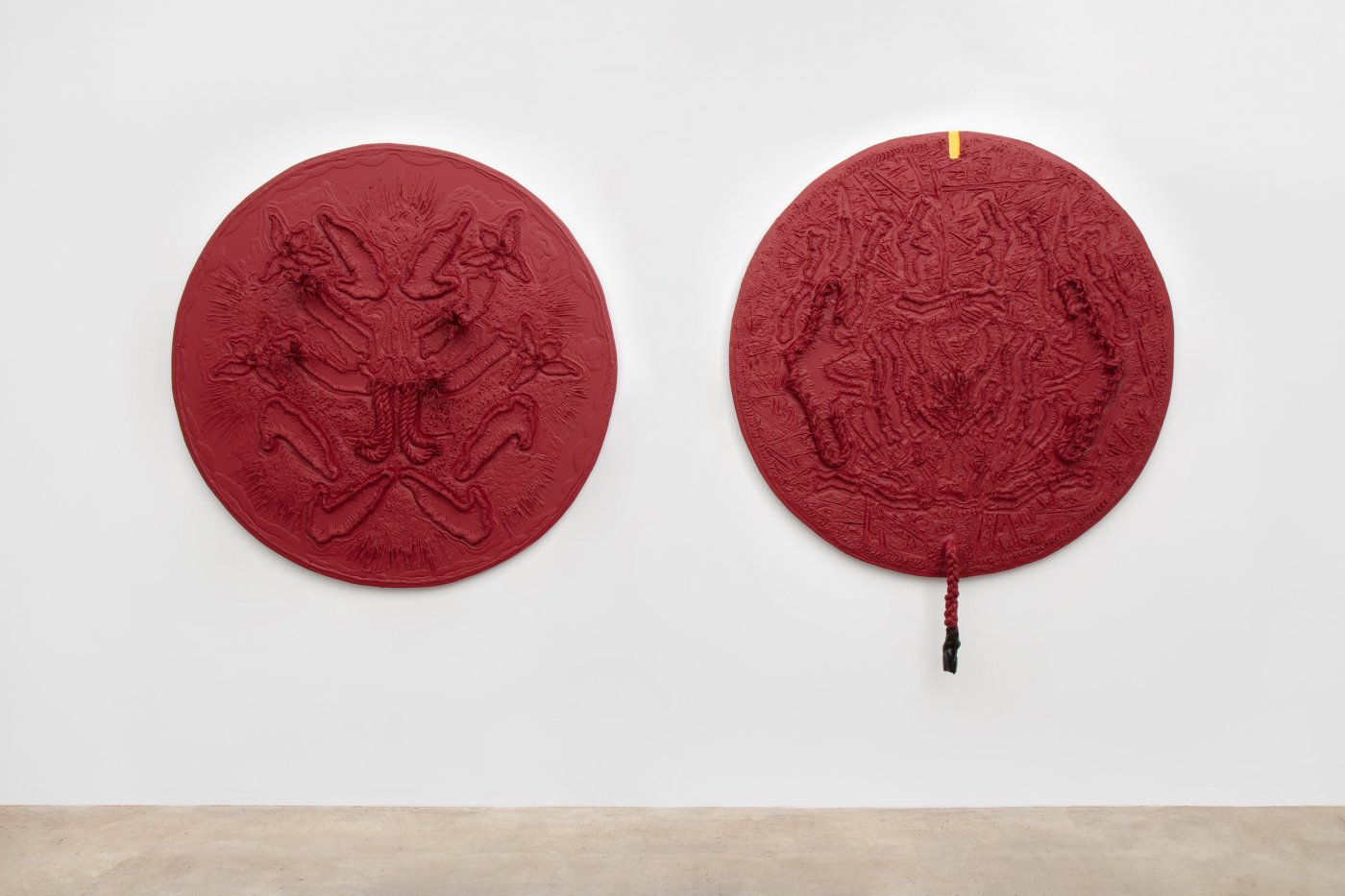 A conceptual artist, who works in the media of painting, sculpture, installation, and performance, David-Jeremiah has recently been making bodies of work in series of three, each comprised of seven works. This exhibition is the third set of seven tondos in the series entitled, I Drive Thee. Using a rich constellation of metaphors, symbols and allusions concieved by the artist, the works examine the themes of ritual, consumption and entertainment, and specifically the notion of Glory in relation to black masculinity.

David-Jeremiah has had a passion for the famed Lamborghini sports car since he was a child finding an aesthetic and almost spiritual connection to the legendary supercar. The formidable vehicle became a conceptual point of reference in several earlier bodies of work, such as I.A.H.Y.F.F.A.W.D. / N.F.D.B.J.W.B.D. 2020 and Hood N*ggas Camping 2020-21, where the artist carved out abstracted shapes of a Lamborghini hood on a wood panel as the support for his paintings.

In the series I Drive Thee, the artist uses both the Lamborghini and the tradition of Spanish bullfighting as metaphors for addressing themes of black masculinity, honor, strength and violence. Many models of the Italian icon have names inspired by bullfighting, a perfect expression for the muscular and powerful cars. Large-scale tondos on wood panel reminiscent of various Lamborghini steering wheels, contain abstracted imagery of human collar bones, orchid blossoms, references to bulls testicles, tails and horns carved into his custom sculptural resin-like medium.

While the first two sets in the series have their own conceptual concerns, in the third set of seven, the paintings carry forward some of these ideas but become more tangible and visceral. They are characterized by physical protrusions made with painted rope extending beyond the two-dimensional picture plane, alluding to stereotypes and taboos of black masculinity – virility, the black phallus, the buck, the stud. Six of the seven paintings are red, a custom color mixed by the artist rather than the previous stock colors of the Lamborghini, but recalling the shade of Rosso Efesto used on some models, as well as, oxidized blood . The artist refers to the current set as “street bulls”, who have embraced and enjoy the intensity and futility of the fight and ultimately find redemption and stand in their “Glory” signified in the sole fiery orange tondo. This set breaks away from the conceptual boundaries, limitations, and rules set by the artist in the first two sets, erupting and pushing full throttle, to continue the driving metaphor, emphasizing the tangible and the physical, and furthermore embracing it.