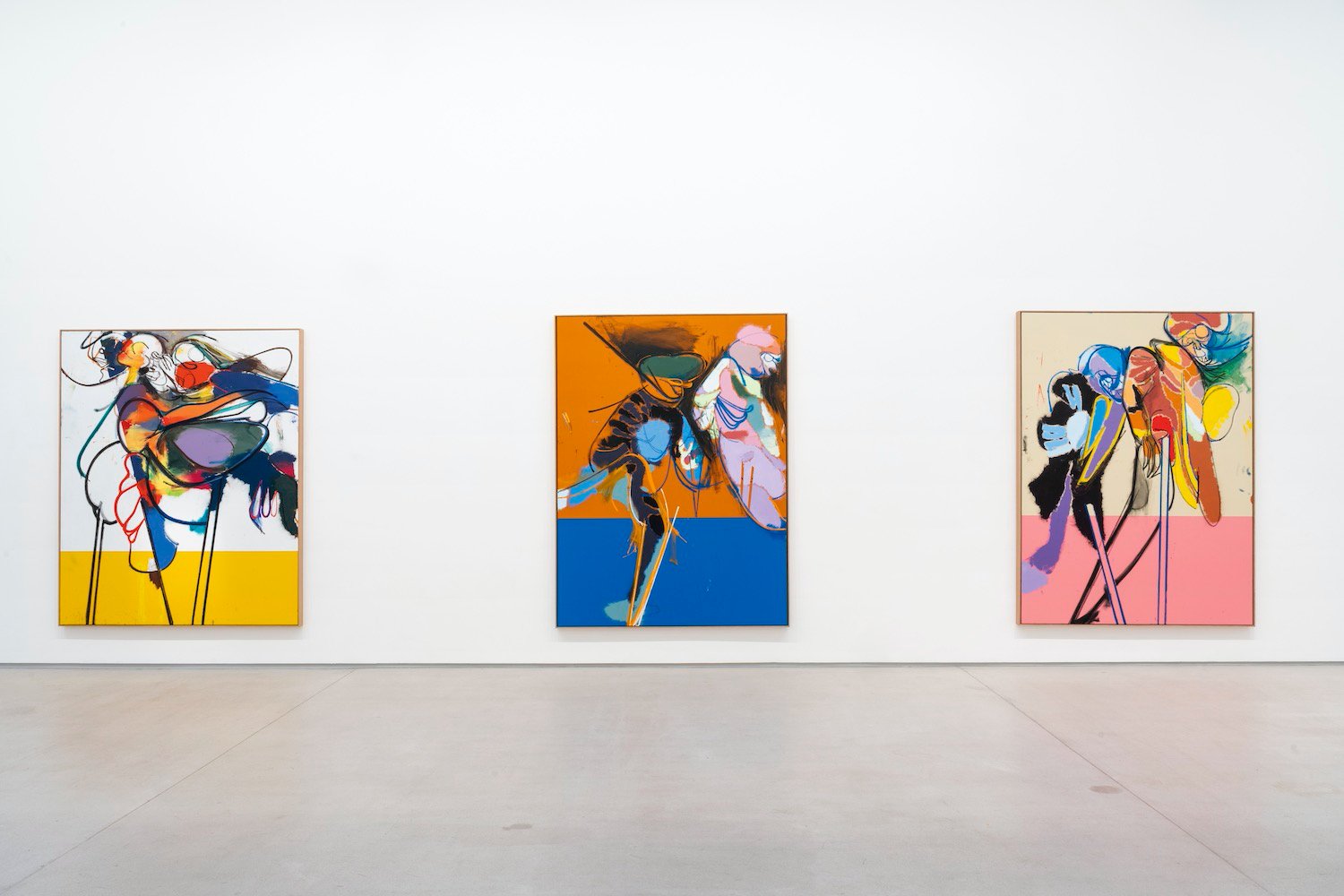 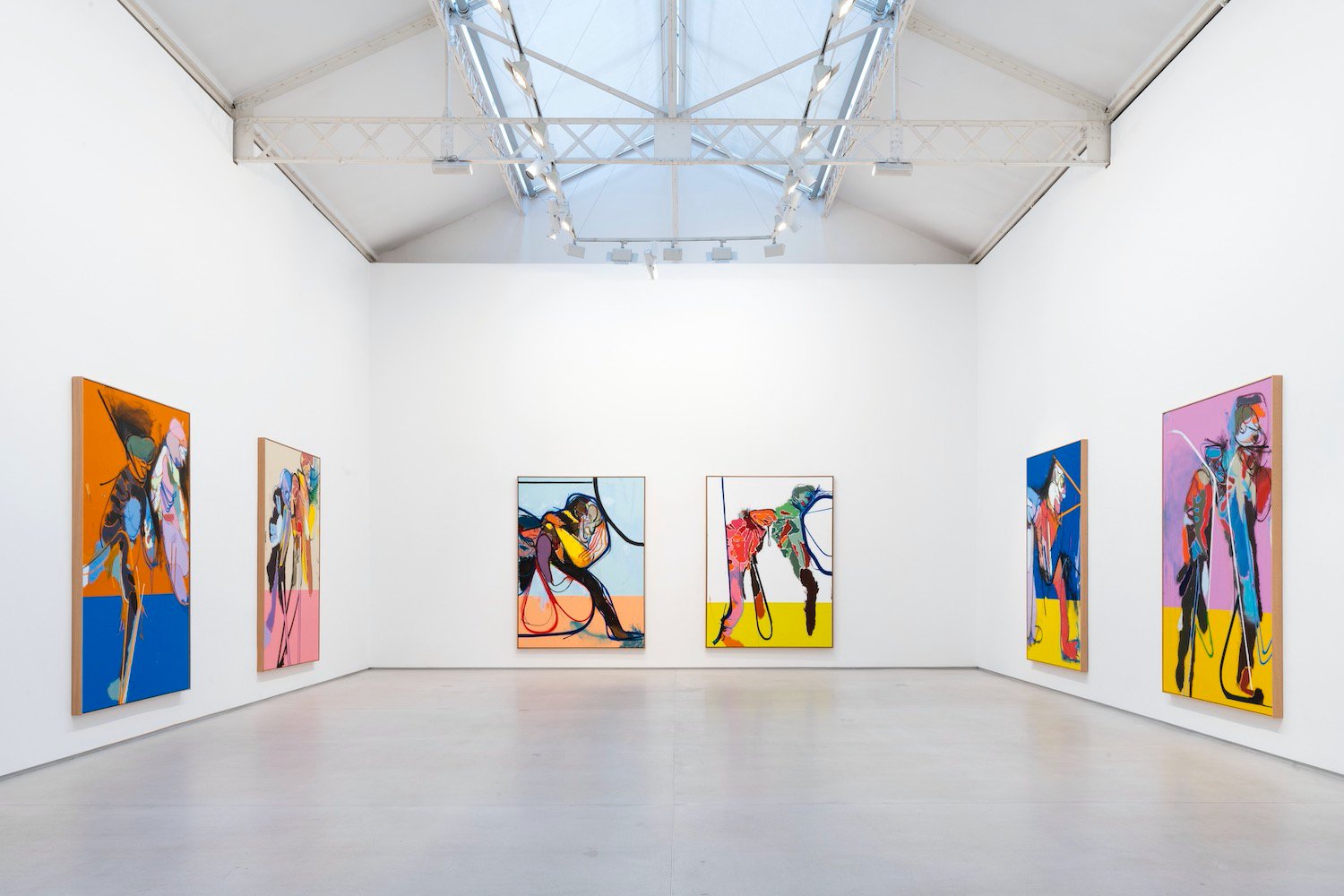 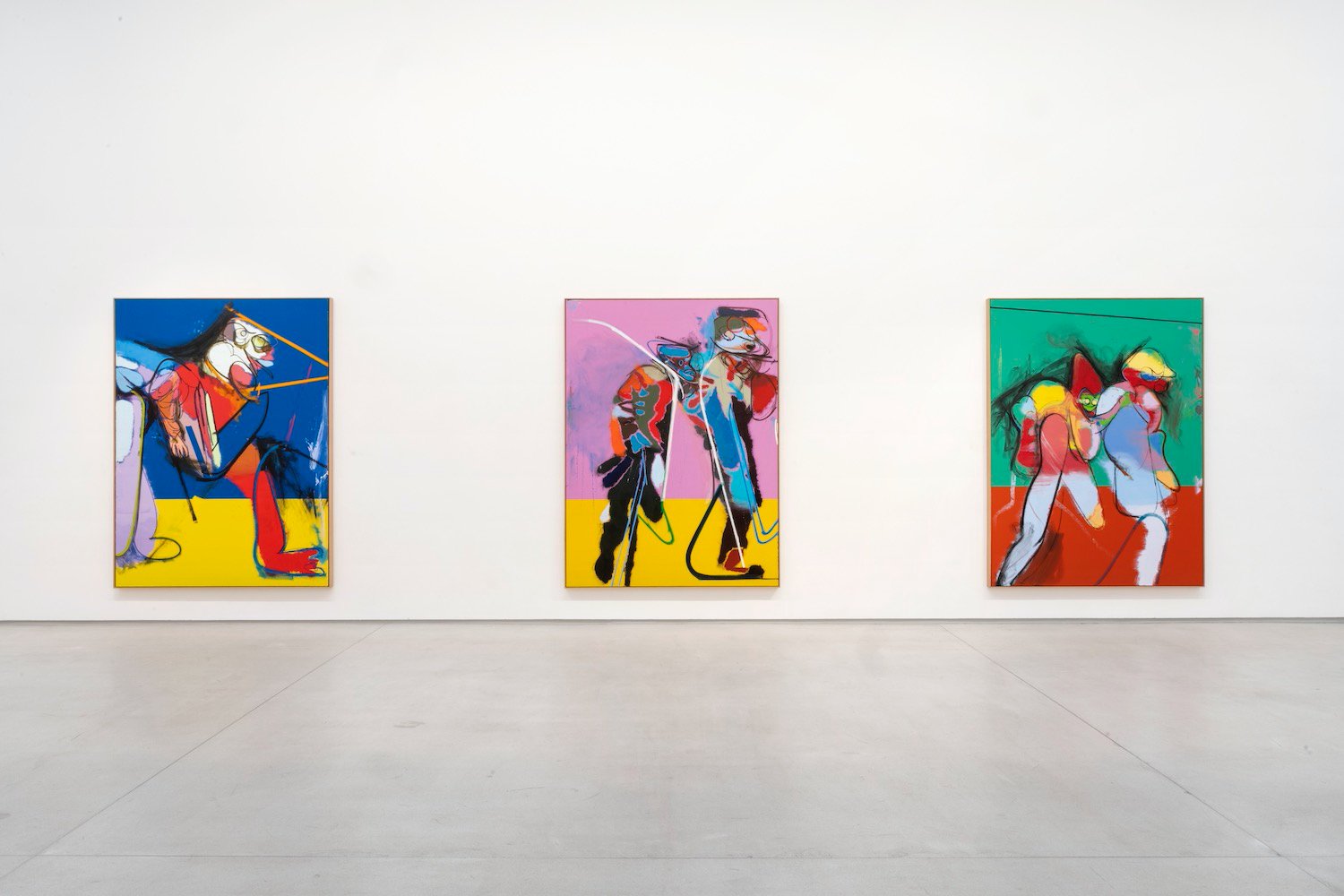 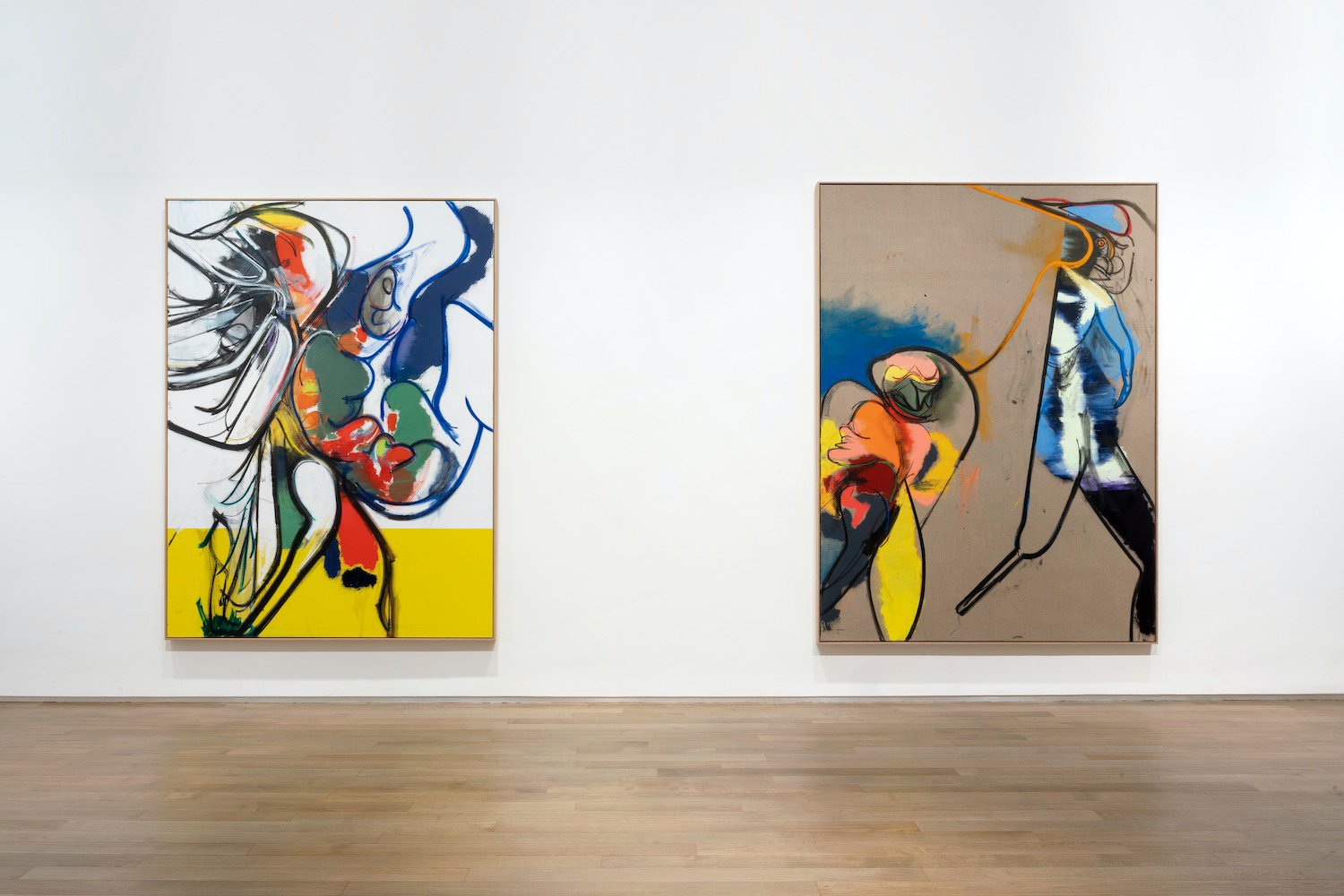 In this new series, the artist’s shifting figures flicker in and out of view, seeming to unite human and non-human elements through the combination of separate, soft-edged, multicoloured patches applied with a palette knife, and stark contours in well-defined graphic strokes of oil crayon. The artist paints the colour fields first before outlining the composition, allowing his directed use of colour to structure the work, rather than the line. There is a sense of dynamism in Daniel Richter’s metamorphosing bodies; the multipartite nature of his compositions and the divisions between their internal elements giving the impression of ongoing bodily disintegration and reconstitution. About his work, Daniel Richter says ‘it’s more a question of systems of representation rather than portraying the body as a carnal, biological thing.’

These new works are more sparse than in previous years, with Daniel Richter even leaving large expanses of his canvases empty. He uses the space between patches of colour, as well as outlines that gradually dissolve and open up as the figures shift from left to right, to express the movement and transformation of soldier-like figures all marching in the same direction. As they transition from one picture plane and one state of being to the next, they seem to leak out of their contours, evoking a post-human world in which beings exist at a transhumanistic juncture between person, animal, and formless colour field. Gilles Deleuze described Francis Bacon’s contours as ‘membranes’ through which material and figure flow, writing ‘The shadow escapes from the body like an animal we had been sheltering.’ The same could be said for Daniel Richter’s loosening, dissolving outlines as they open to release monstrous extensions to his human figures.

The artist’s original inspiration for the series is a 1916 postcard depicting soldiers with missing legs on crutches, silhouettes that appear in paintings such as Licht ohne Trost (Light without Comfort, 2021). He revisits the complex relationship between historical imagery and propaganda according to his own particular visual language and powerful destructive energy, as suggested by the title of the exhibition – ‘fury’. Daniel Richter’s paintings reference the First World War and specifically the vandalism of French heritage by German troops. Though it remains resolutely contemporary, his work alludes to the tradition of German interwar painting, in particular works by artists such as Max Beckmann, traces of whose distorted, mangled soldiers find their way into Daniel Richter’s strange, limping figures. These make reference to the art historical tradition of depicting injured war veterans, with crutches and prosthetic legs interchangeable with their remaining limbs in an unresolved tangle of outlines that suggest transhuman bodies by blurring the line between flesh and prosthesis. Despite their underlying violence, the works convey a touching beauty that counterbalances their restless energy.

In Furor I, the artist’s palette of ripe, cloying colours evokes both the sensuality and vibrancy of the living body and an aggressive, uncomfortable artificiality. For the past five years, many of the artist’s backgrounds have been made up of flat gradations of colour. In these new works, he further reduces his backgrounds to only two colours: one above and one below the horizon with a single dividing line between them. As Daniel Richter said in conversation with Poul Erik Tojner for the catalogue of the Louisiana Museum of Modern Art, Humlebæk, Denmark, in 2016, the straight lines he employs ‘shape this fake horizon as in a “sublime” landscape painting’, creating distorted, unsettling variations on the notion of horizon in painting in a way that recalls disorientating augmented reality backgrounds. Through his constant questioning of the place of painting in contemporary society, Daniel Richter seeks to bring contradictions to light. ‘It is hard to escape history and tradition, especially in something as conservative as painting,’ says the artist, ‘I work with all these contradictions.’

‘Richter’s works to date have demonstrated an impressive complexity and versatility, since his style is constantly changing while still remaining true to his basic principles. […] With their dazzling colors and pulsating insistence, their latent aggressiveness and wealth of edgy effects, his works are nonetheless immediately recognizable as such. Richter’s works interlock set pieces of art history, the mass media, and pop culture to create idiosyncratic pictorial worlds.’ — Max Hollein, 2015