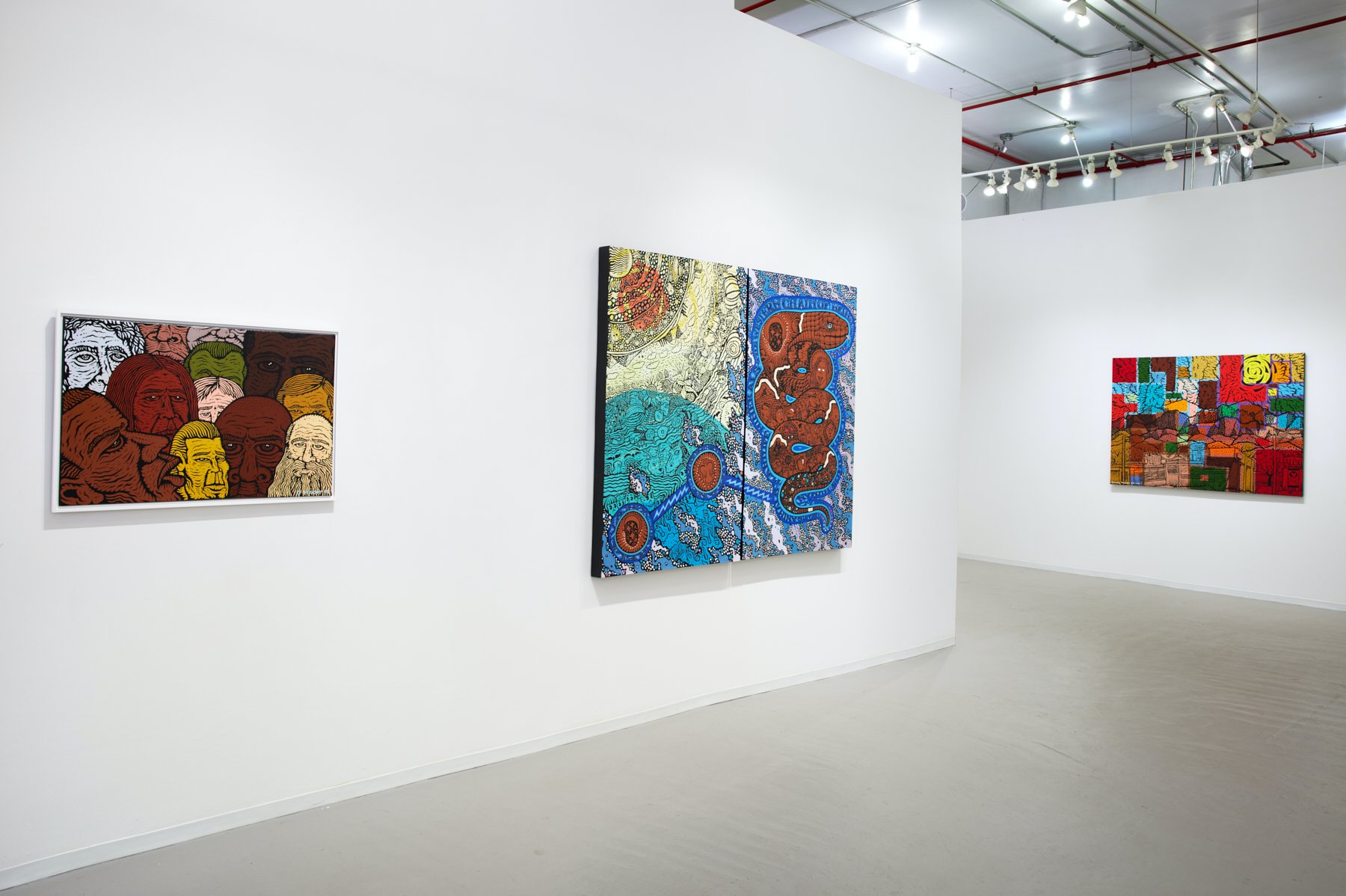 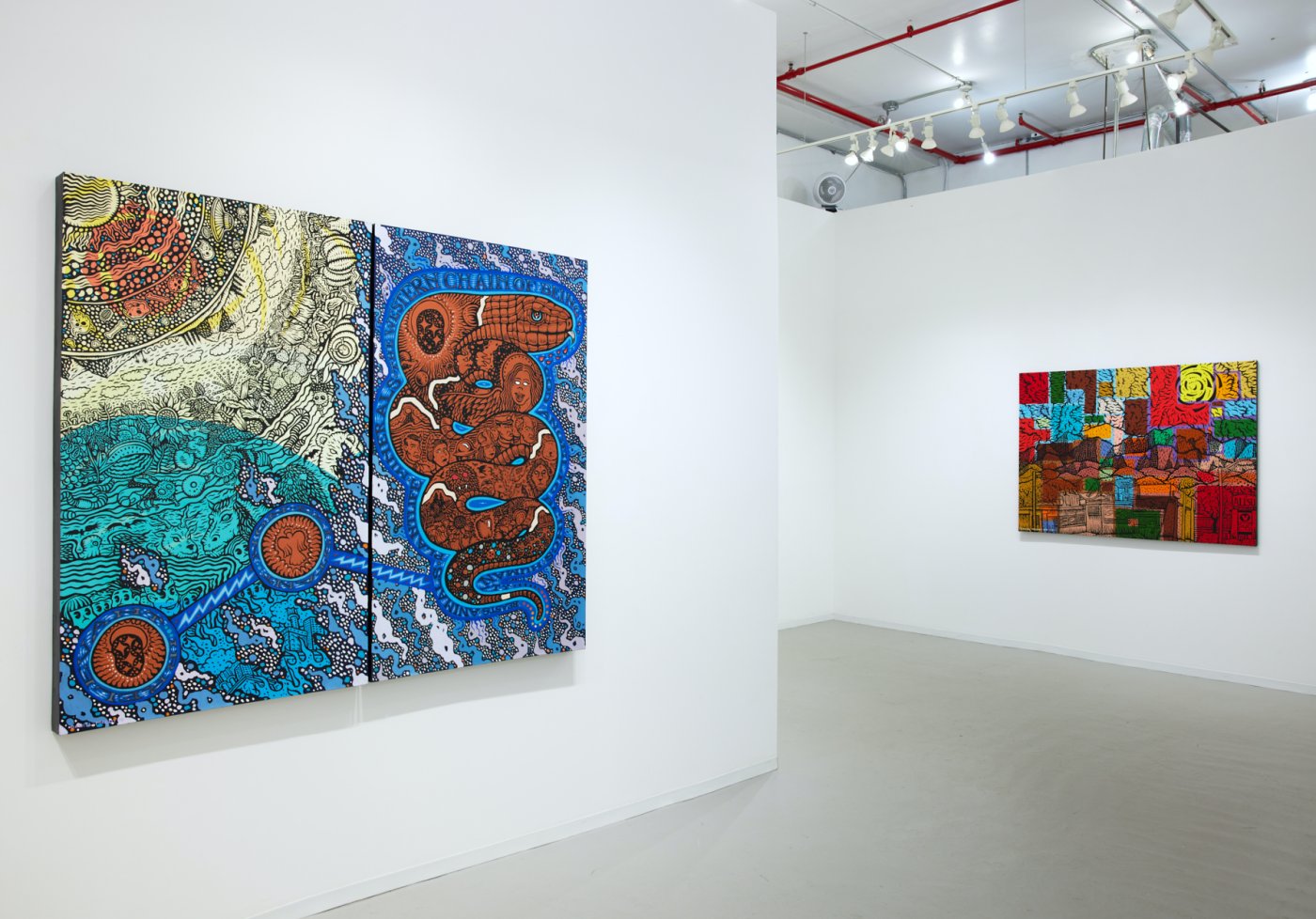 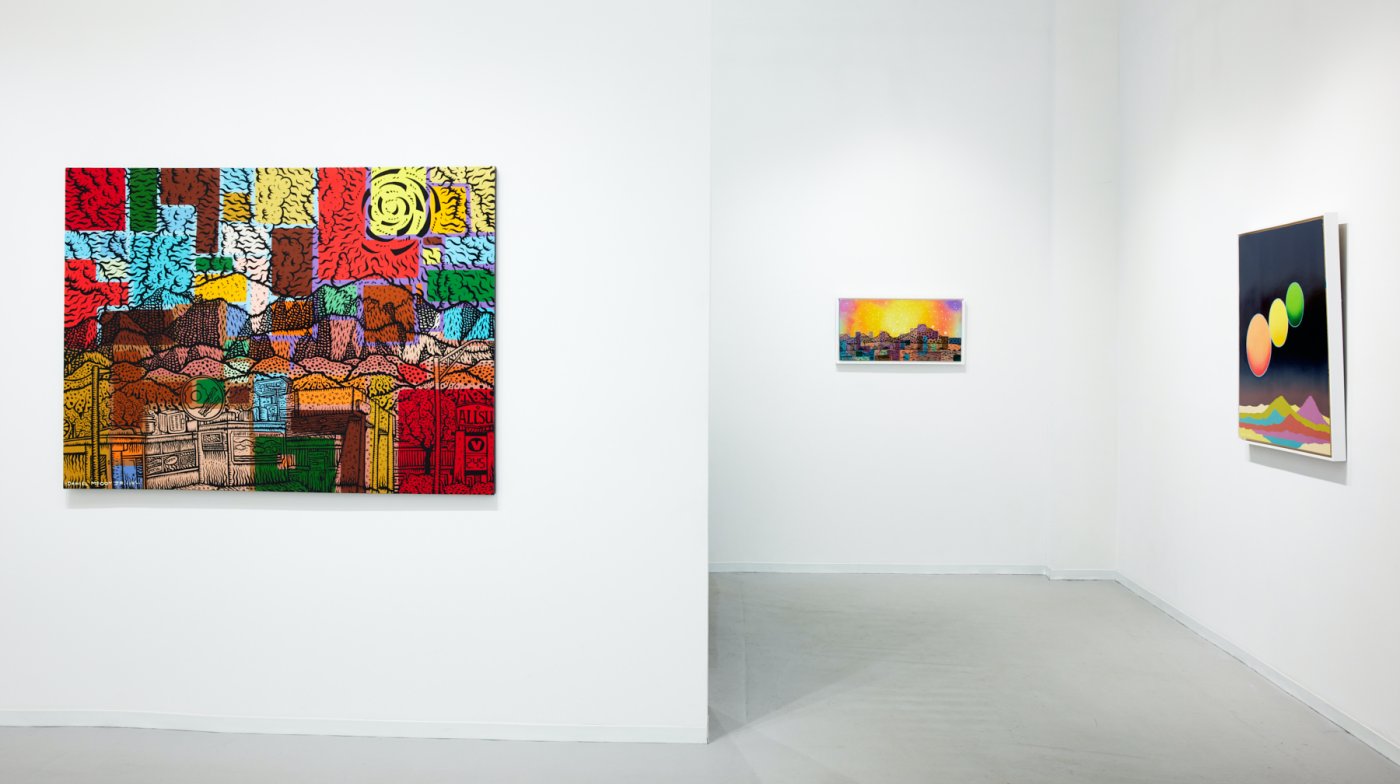 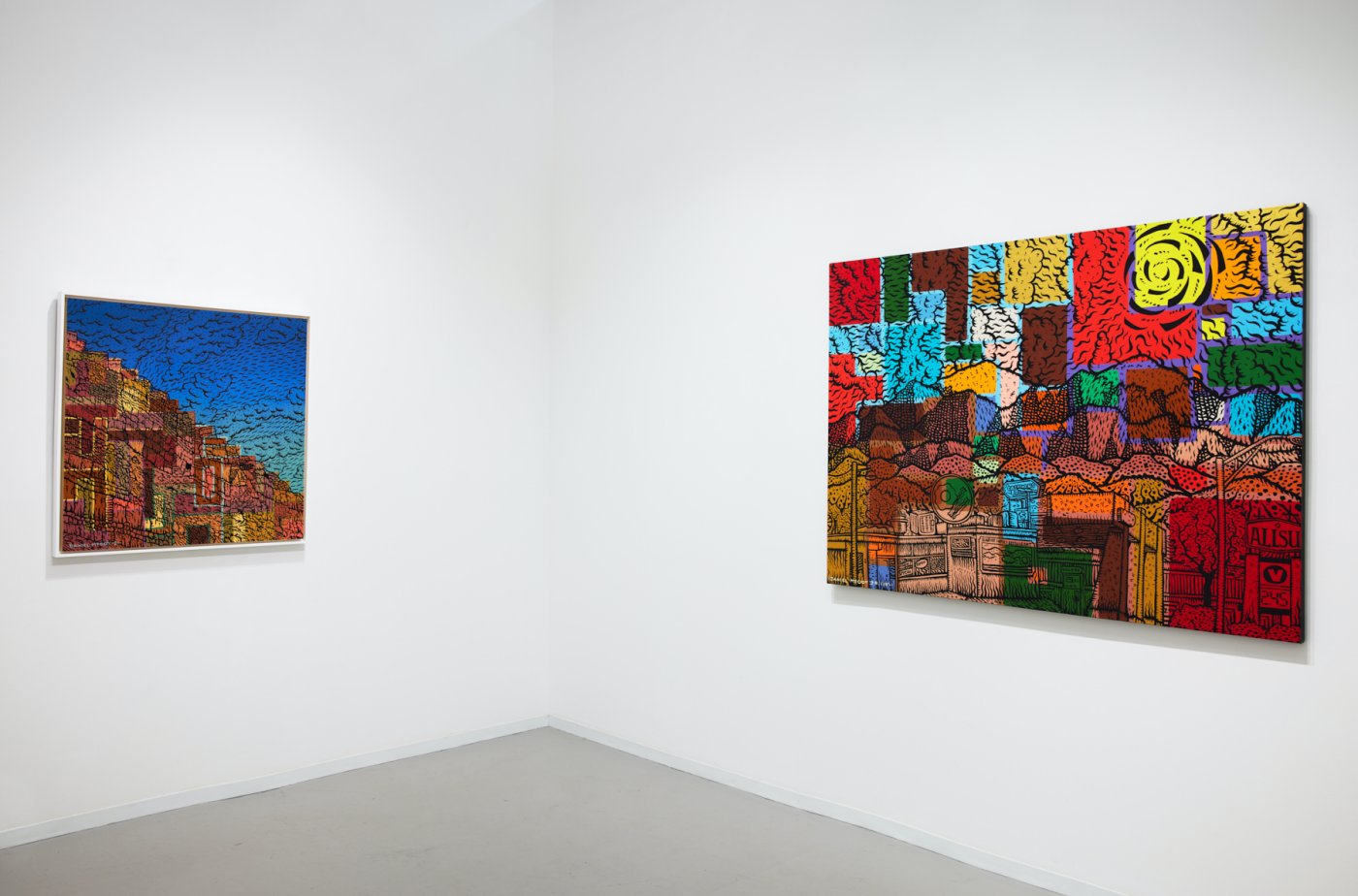 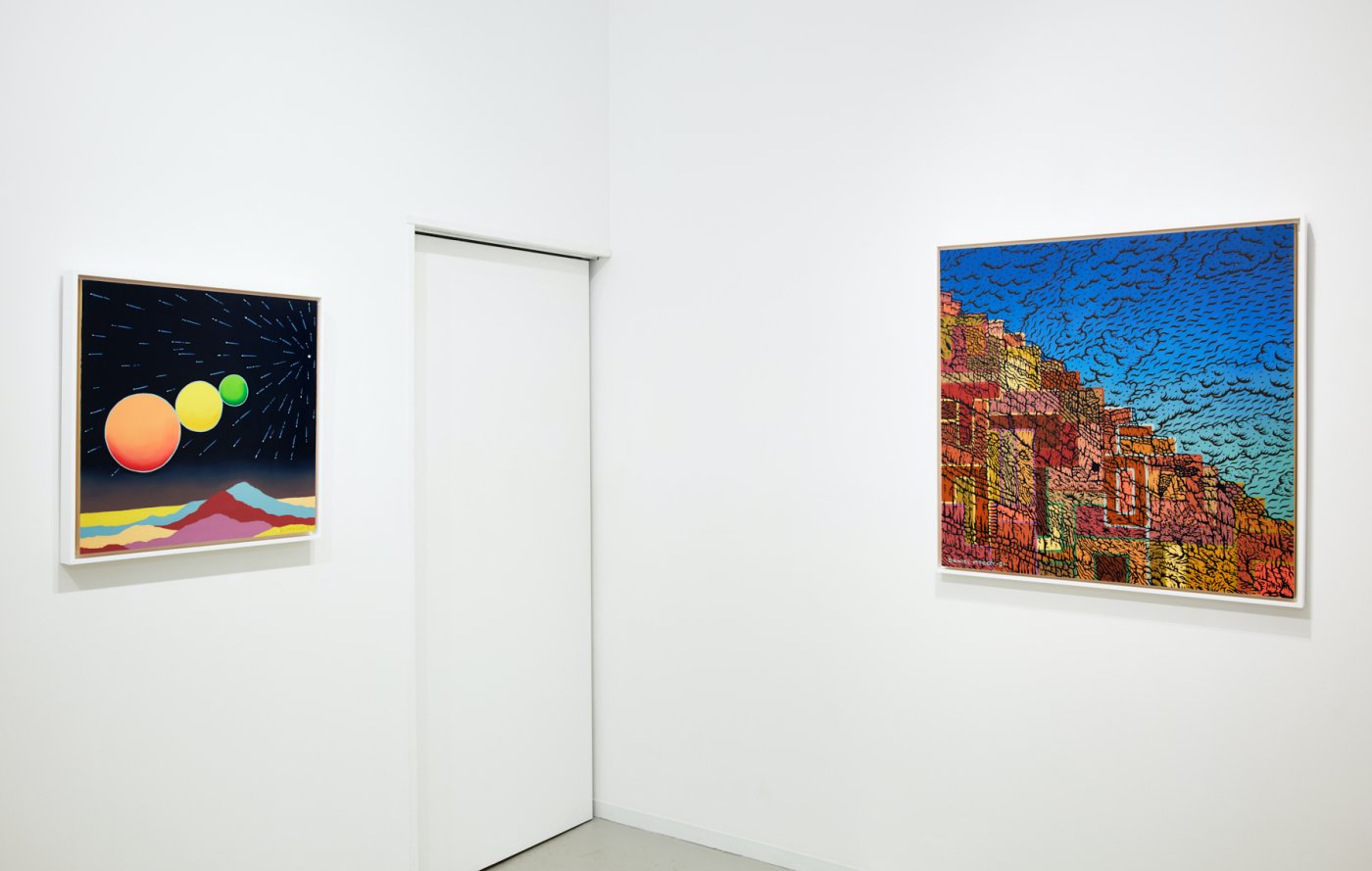 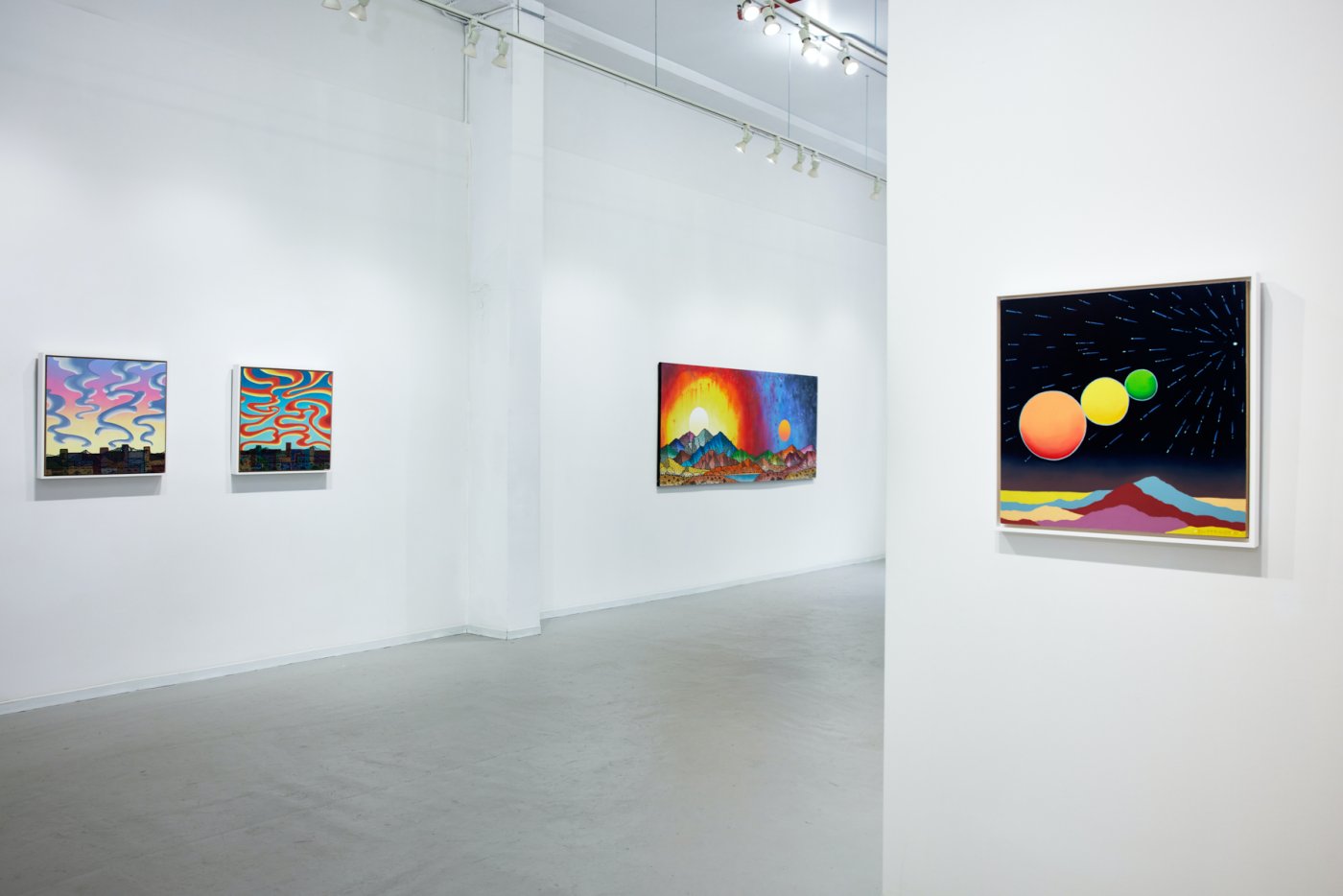 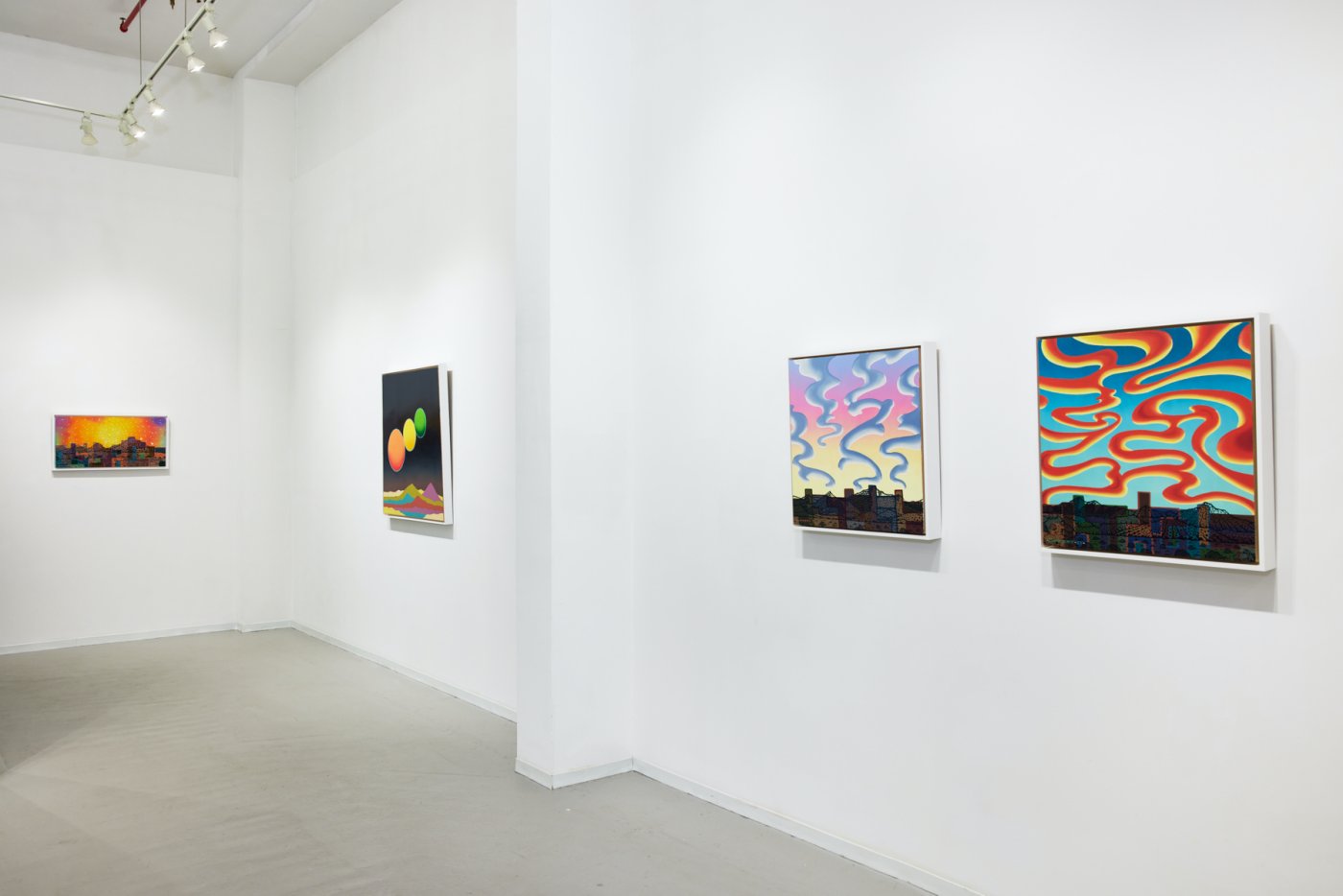 McCoy’s artworks have been included in several curated group exhibitions at the gallery since 2016. This presentation includes 10 paintings in all, of which 7 are new and created during the pandemic and based on the landscapes and skyscapes that the artist experienced each day as he traveled to and from work during his daily departure and return to the solitude of home isolation. Three of the paintings are recent, dating from 2016 and 2019 that represent significant memories and influences from his early days after moving to New Mexico as well as his Native roots and upbringing in a hardworking middle-class home.

McCoy’s paintings are full of color, geometry, energy and cartooning that read as Pop art, Psychedelia and story-telling with influences of Surrealism, landscape, patterning, graphic design and indigenous cultures. They are full of imagery comprised of detailed and intense black linework laid on top of blocky fields of color that not only represent the mountains and rocky canyon walls of the New Mexico landscape, but also the geometric tan, brown and beige pueblo structures on the Native reservations. The complex layering of imagery and colors makes the paintings vibrant and subject to different interpretations depending on the viewer’s distance from the painting and angle of viewing.

In the artist’s words, “These paintings are atmospheric observations made between late Winter Solstice to late Spring all the way up to the approaching Summer Solstice. These paintings came out of a daily work schedule and a creative release after being denied access to my studio located on Pojoaque Pueblo for ten months during the Pandemic. I realized near the end of production that I am producing a desert study in the areas in which I live. Everything in my traditional background relates to seasons and astronomy, being separated from my cultural ties here in New Mexico, my observations of the surrounding environment, Sun and Moon positions have worked its way into the recent paintings.”

About the Paintings of Daniel McCoy, Jr.:

Cartooning has a foot in representational art and figuration while still being reductive with a flatness from Pop, making it inherently abstract. McCoy can convey a clear message without being overly realist. When he was just beginning his professional career, much of Native American art was narrative, very representational and realist that romanticized cultural stories and the past. However, McCoy preferred something more authentic and unique to himself, which was campy, not too serious and a little playful while still trying to convey a message, relay a tribal story or dabbling in Native mythologies as well as his own memories of his children, father and mother, including Bob, a figure frequently referenced in his work who was a long-time family friend and influence on the young artist.

McCoy had a mixed heritage upbringing as a child. His mother was Native American and her mother’s side of the family was from the Muscogee (Creek) Nation, while her father was from the Citizen Potawatomi Nation, which were two adjacent territories in Oklahoma. His non-Native father was Irish and a biker and brought with him graphic design, Pop culture, Harley motorcycles, the Bohemian lifestyle of west coast hippies and rock ’n roll from the 1960s and 70s, all of which were a huge part of his father’s influences and the younger McCoy’s as well. However, Daniel McCoy was also a product of the Native educational system from boarding school as a child to his academic studies at the Institute of American Indian Arts when he was accepted to the Institute and moved to Santa Fe. As a result, he saw everything through a Native lens, but accentuated with the contemporary Western world through his father’s influences. Something that stuck with him from the Native education was the “flatline” Native art that was also a feature of Pop art as well as the cartooning from comics and Psychedelic posters from the 1960s. This was an interesting fusion that melded his mixed cultural upbringing.

McCoy’s father, a product of Mid-Century American culture and influences, including: car culture, detailing and pinstriping cars and motorcycles, was also a frustrated artist. And, since fruit does not fall far from the tree, McCoy was also influenced by American car culture, comic books, rock ’n roll music and the West Coast counterculture of the 1960s and 70s along with the psychedelic artistry and cartooning of rock posters by R. Crumb and Rick Griffin. His passion for graphic design, sign painting and music are all influences on his approach to art, the imagery and his own personal narrative not to mention cultural influences from his own generation that included Hot Wheels cars, Star Wars, Allsup’s gas stations and mini-marts that are all over New Mexico. Allsup’s was a hangout for pre-teens and teens alike, as well as everyday folks pumping gas on their way to work and travelers getting a taste of the local culture and fare while filling up.

Allsup’s made an indelible impression on McCoy as he commented on his favorite colors in his paintings, which happen to be their brand colors, ”I include the Allsup’s elements [in his artworks], because I believe they’re hubs of culture,” when interviewed by Alex De Vore that published on May 8, 2019 in the Santa Fe Reporter. He went on to say, “Otherwise, I’ve really never stuck to stucco red or turquoise or sagebrush and mustard yellow.”

The young McCoy initially rejected any interest in landscapes, earth colors and traditional Native realism in his artwork. However, as he and his artwork matured and especially after taking his children on walks and hikes through the spectacular and dramatic New Mexico vistas and mountains, the artist developed a new interest in the land and stories as well as their significance to his daily life and Native culture. This newly found interest in the landscape and solstice that provide vitality for his heritage are now finding their way into his most recent paintings. While these latent influences from the traditional schooling are finding their way front and center in McCoy’s paintings, his signature cartoon style, Pop imagery and vibrant colors remain his distinct visual language and a constant in the new compositions.

Daniel McCoy Jr. has thirty years’ experience in art circles in Oklahoma and New Mexico. He is an enrolled member of the Muscogee Creek nation and a descendant of the Citizen Band Potawatomi. McCoy has worked in the commercial art field, and in Santa Fe’s best Museums and Galleries as an exhibition specialist among other positions. Daniel McCoy’s artwork has been featured in public spaces, markets, galleries and renowned Museums such as the New Mexican Museum of Art and the IAIA Museum of Contemporary Native Arts recently. He is currently a painting assistant to some of the southwests most successful contemporary artists. He currently resides in Santa Fe, New Mexico with his family. He will continue to produce paintings about his surroundings and life.

Painting, and mark making is essential for myself surviving in this society. Not only is painting how I support my family, but it is also a conversation I am speaking with other artists. A timeline I am leaving for whomever may listen, or whomever shall see. For my personal work, I add my fiction, surroundings, and personal narrative in the paintings. I believe it my most successful way to communicate to others. I can get more across with pigment and surface than I probably can verbally.

Currently, I work with Oils, Enamels, Watercolor, Acrylics, Inks and Dyes. I apply these mediums to various surfaces to create the pieces. I have a sense of urgency to create more and learn new techniques as soon as the opportunity presents itself.