Timothy Taylor presents Daniel Crews-Chubb’s (b. 1984, Northampton, UK) second solo exhibition with the gallery. Bringing together a series of new paintings and drawings, Humanoids navigates the material and mythological world the artist has explored for many years. 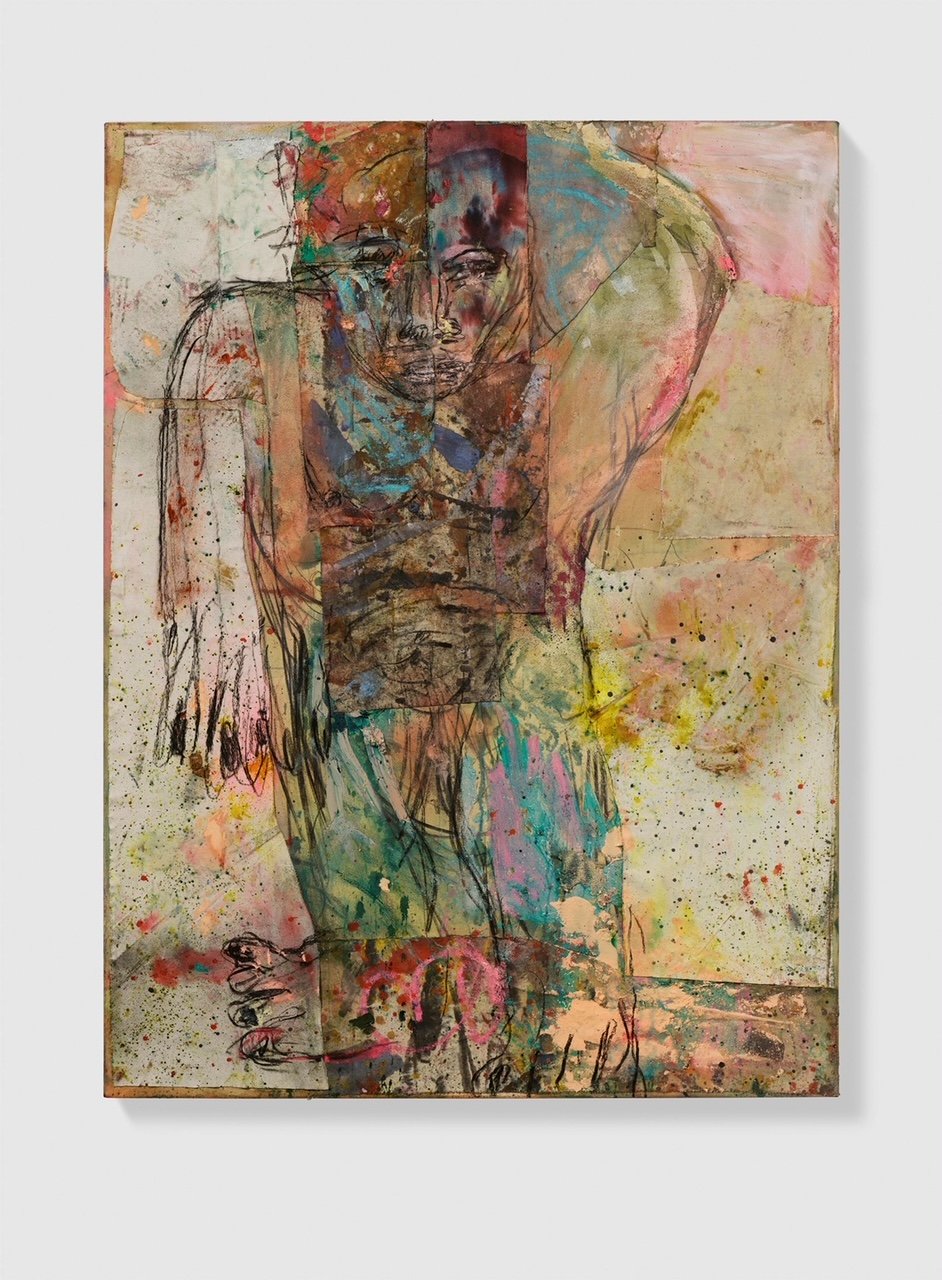 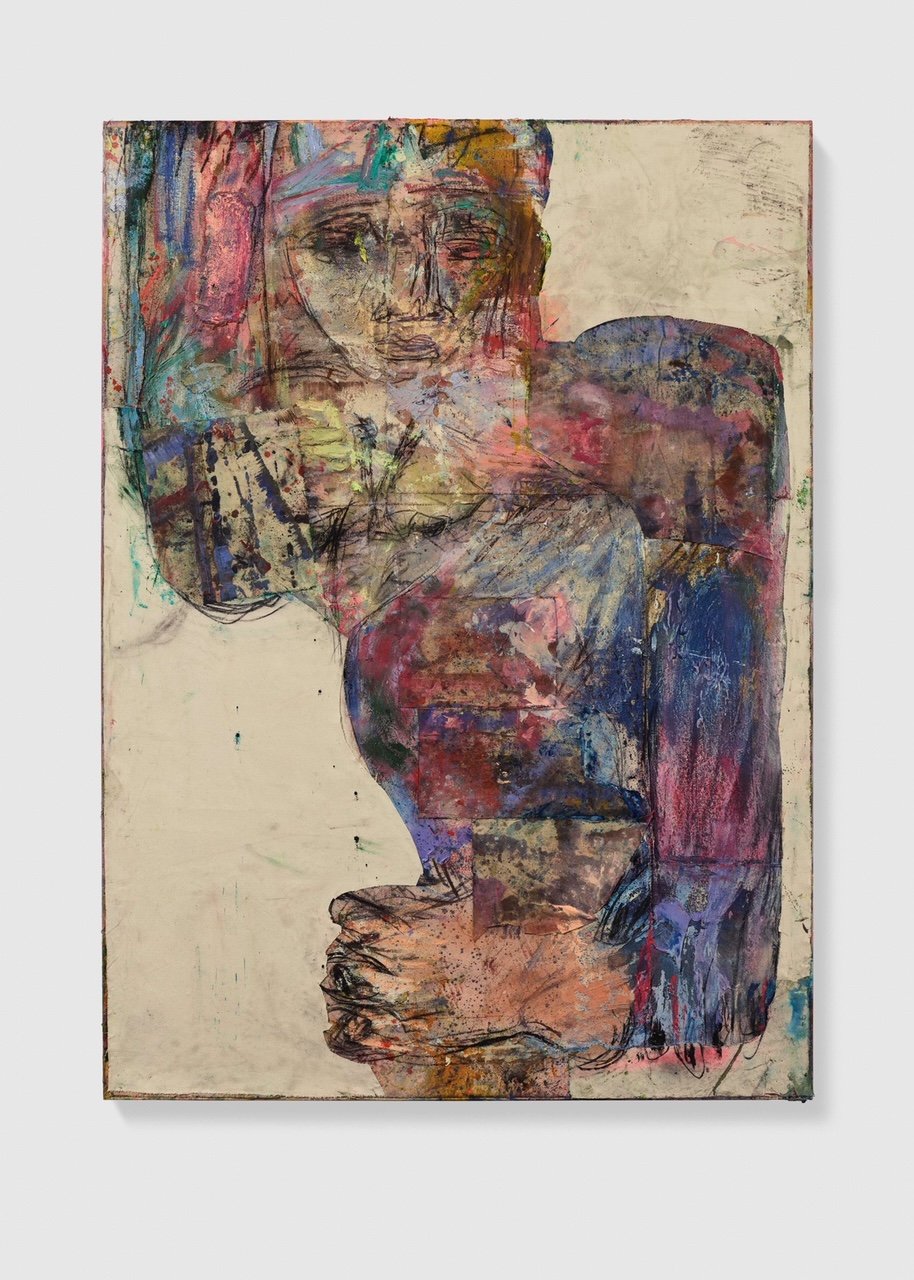 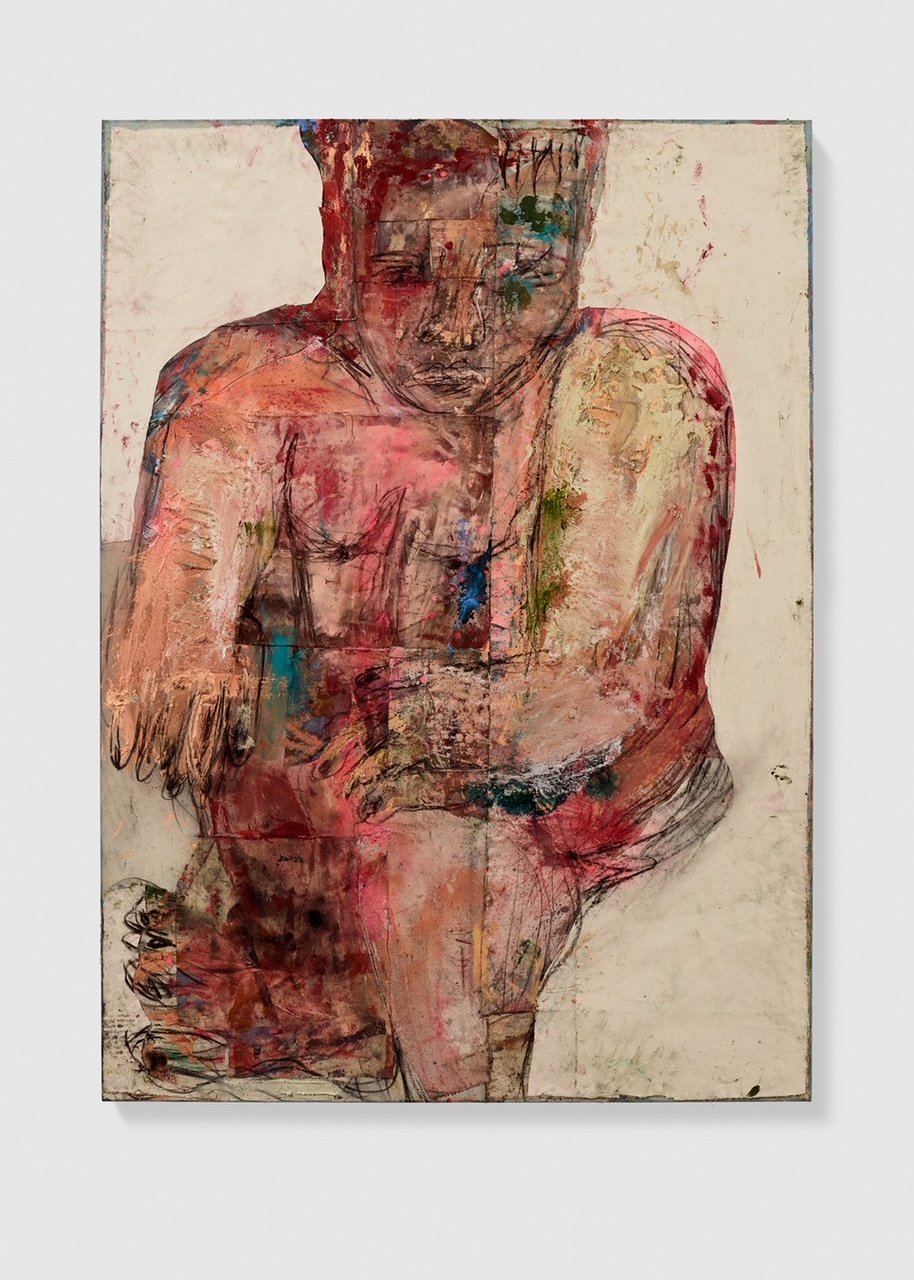 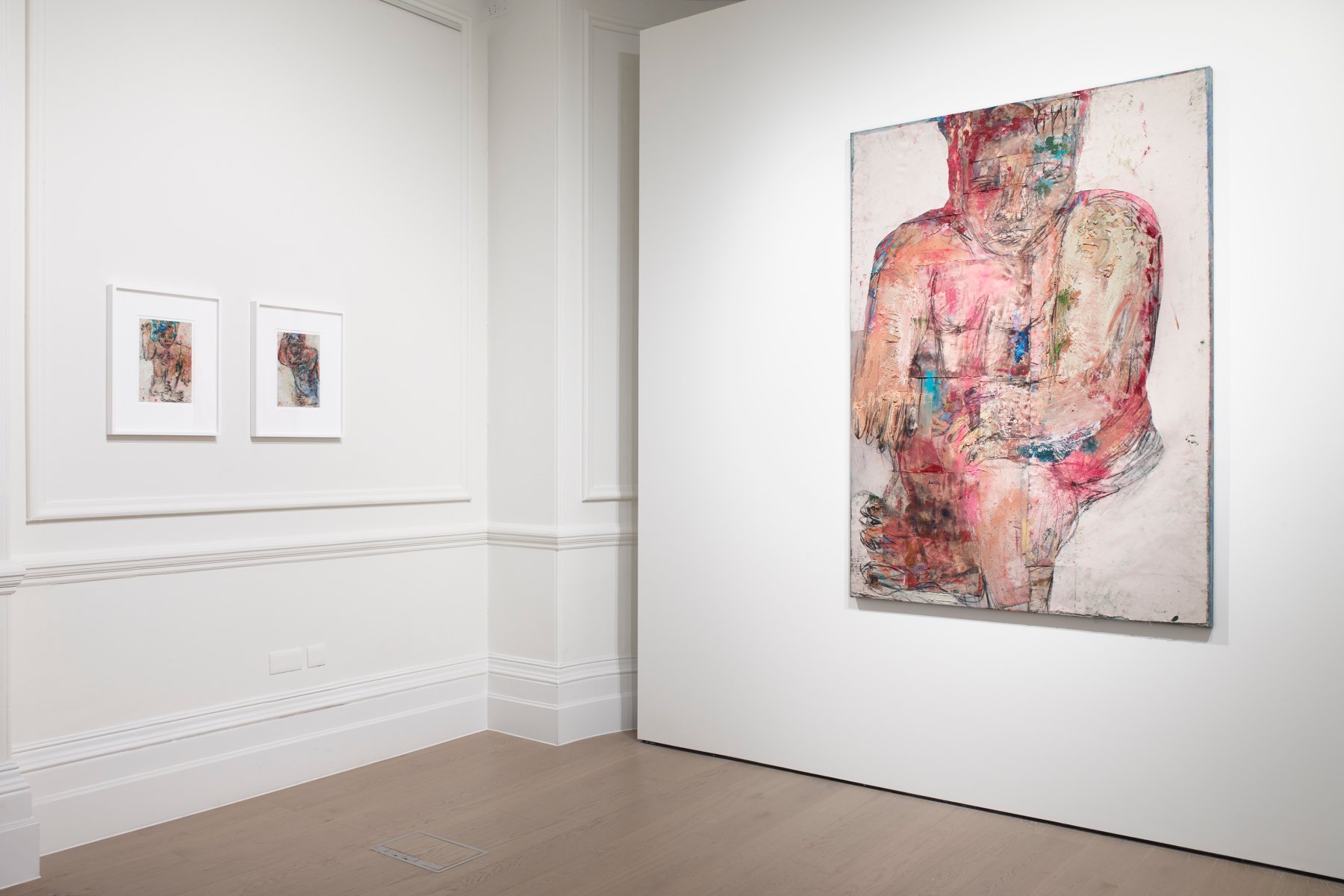 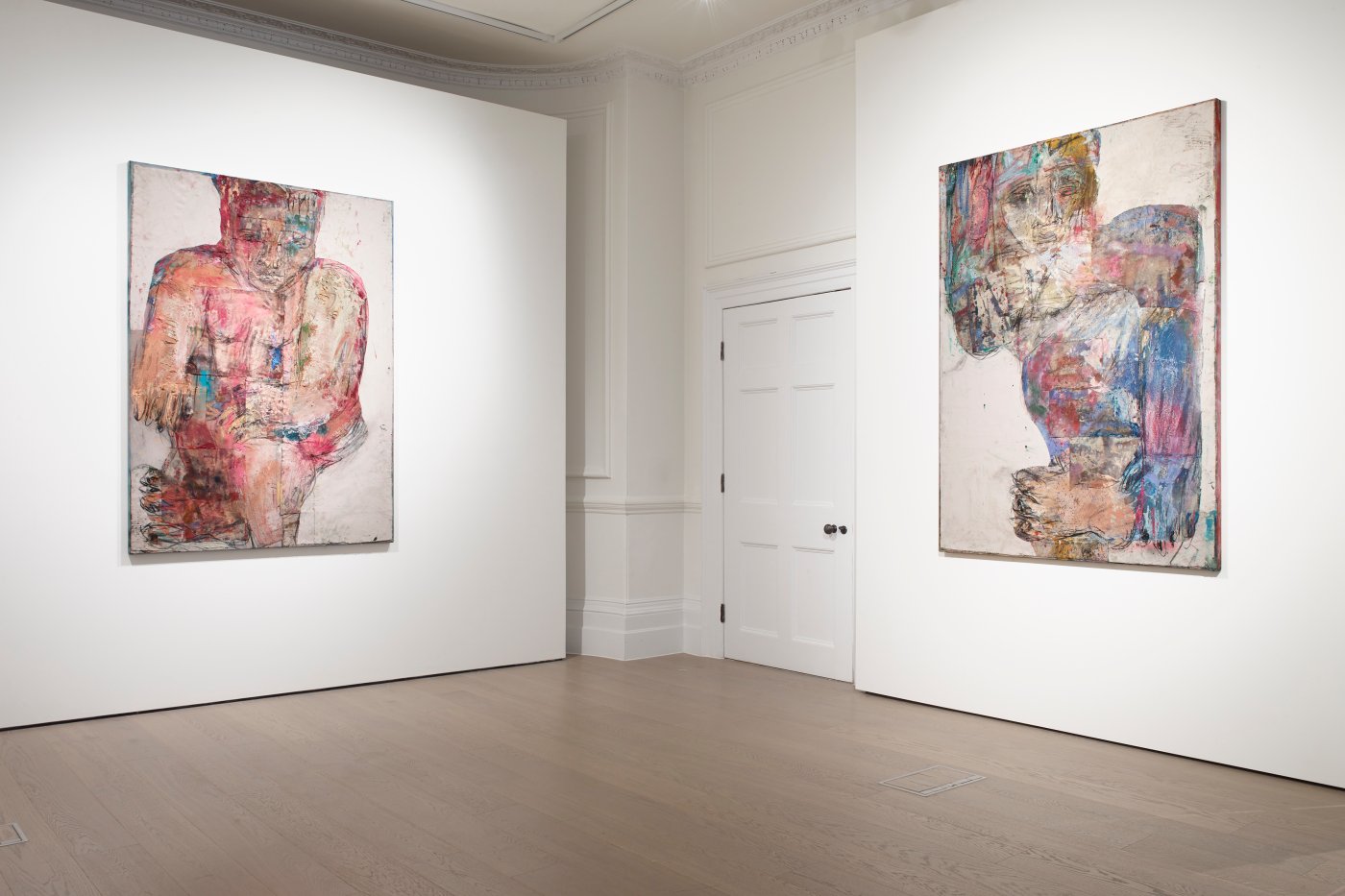 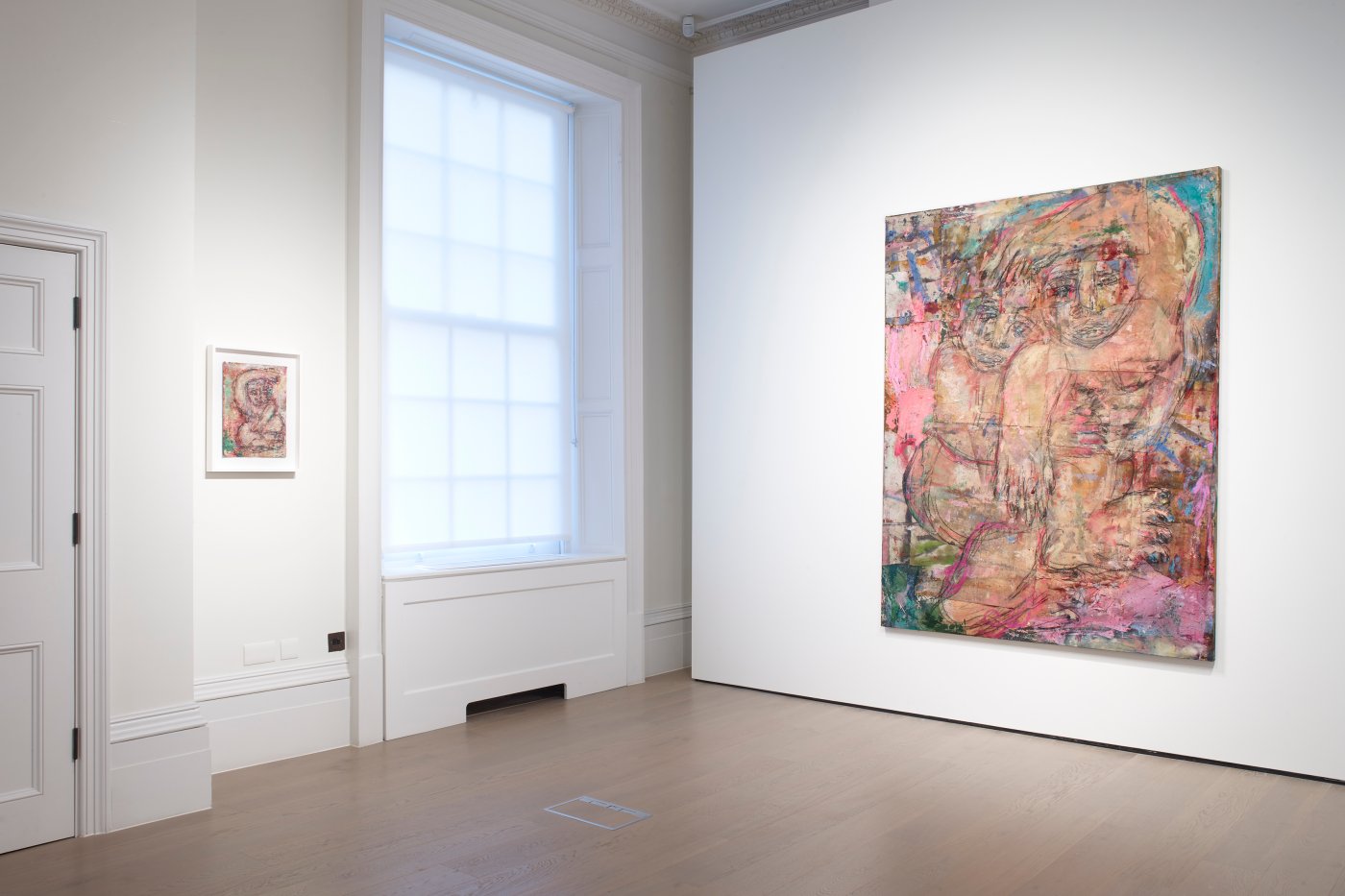 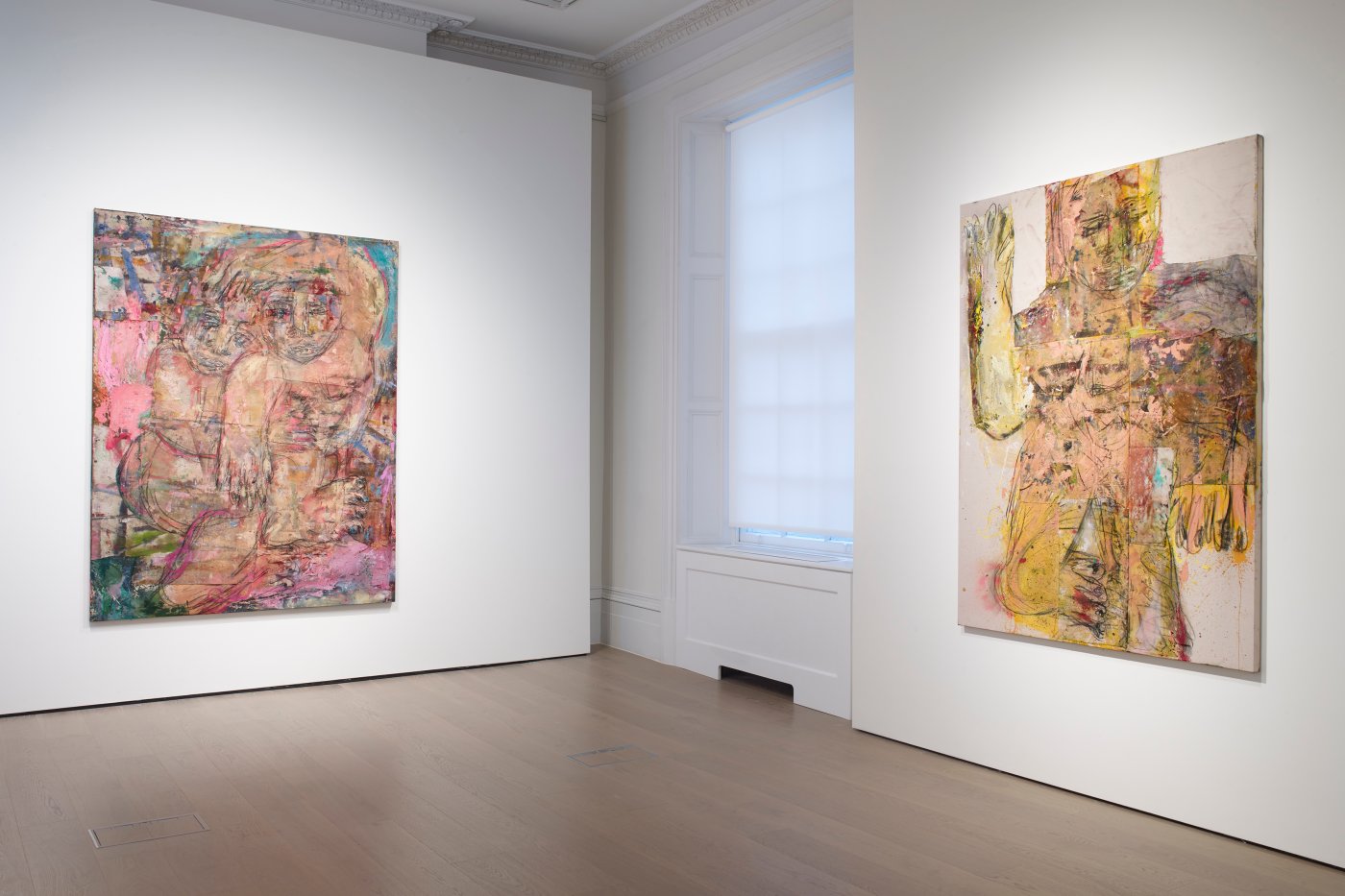 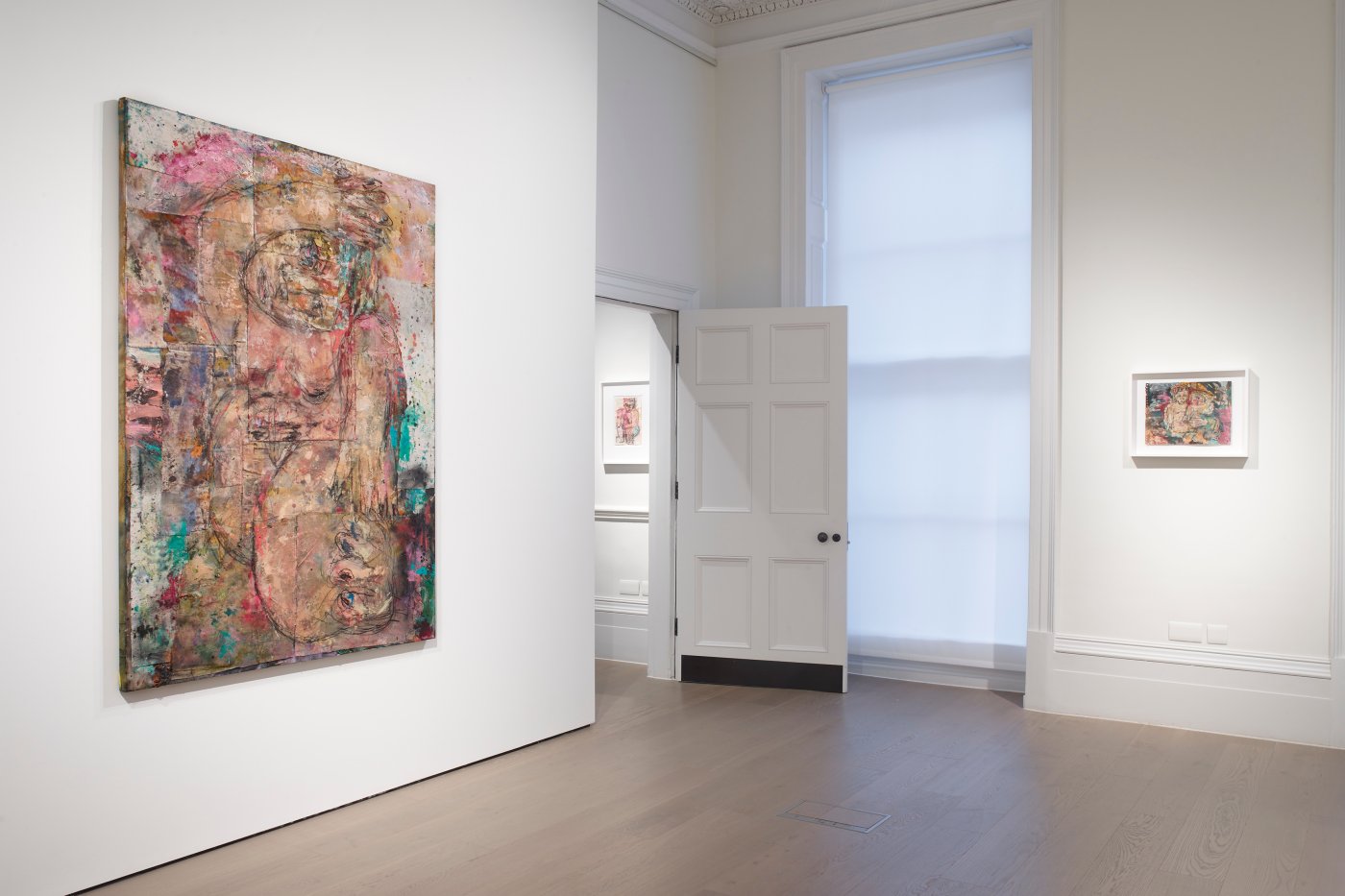 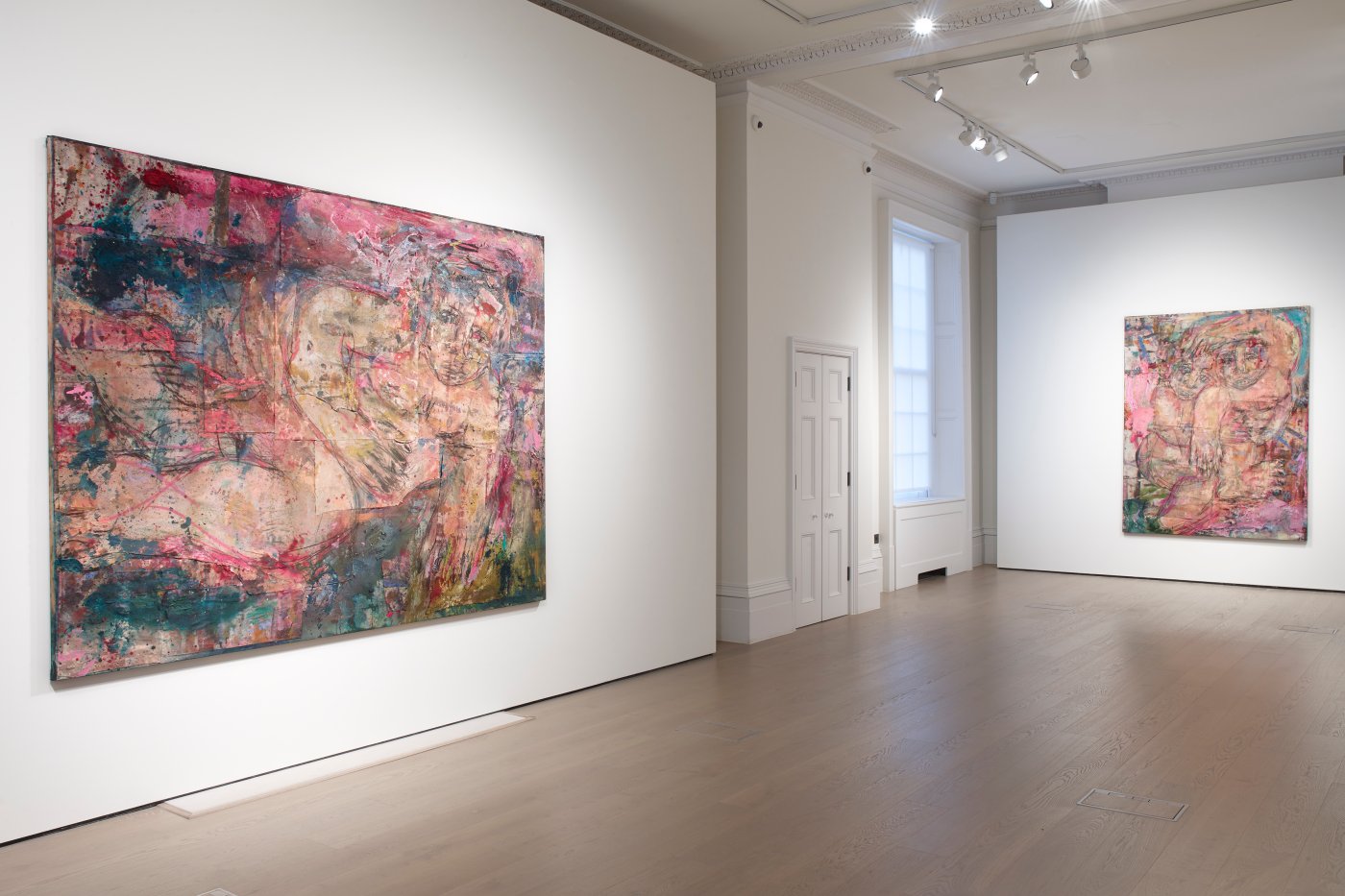 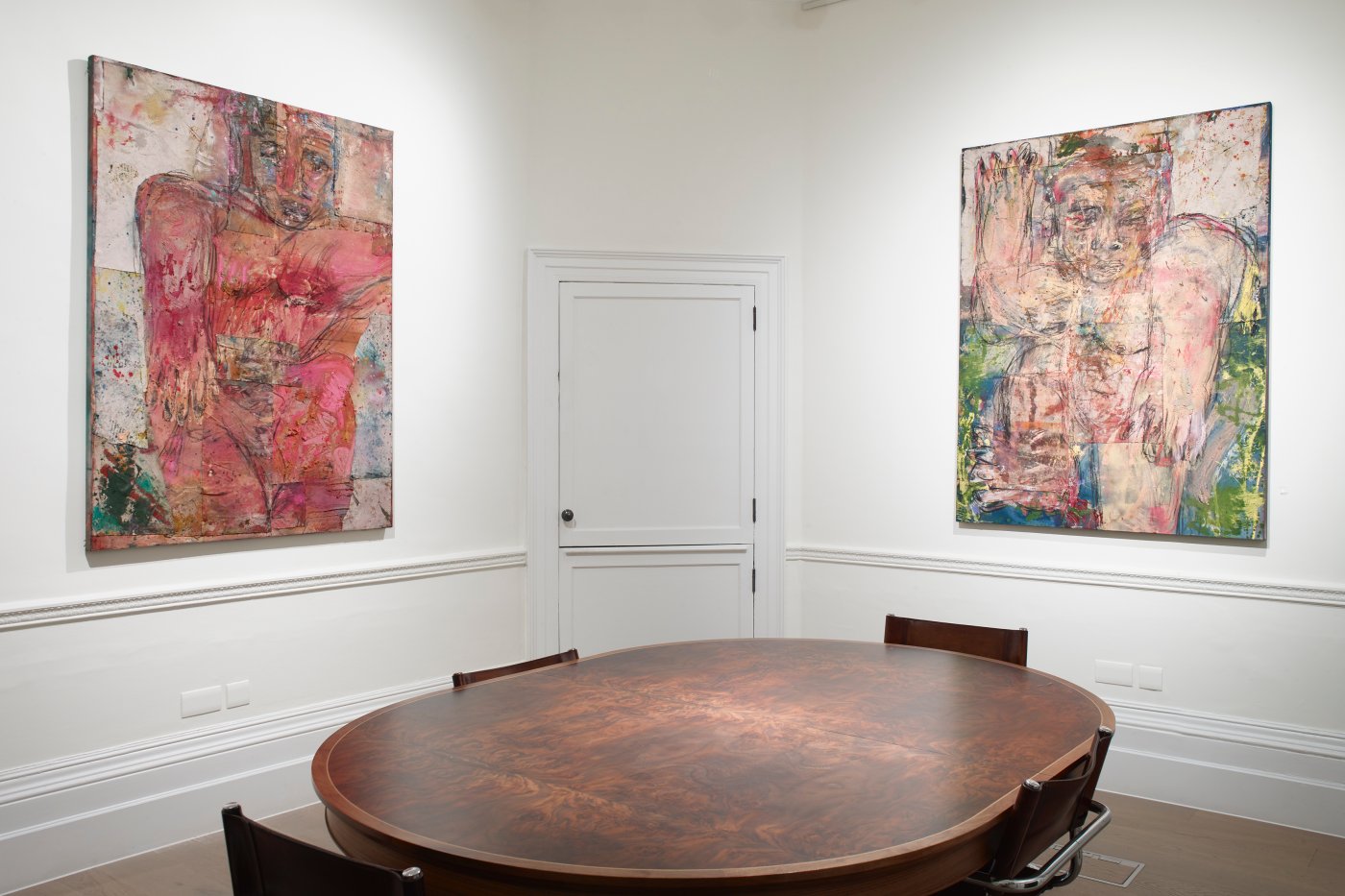 ‘The most human thing in the world is to create,’ Crews-Chubb says. His new paintings, stained a rich melange of brilliant cobalt and scarlet, gilded yellow and swamp-green, are as much about the process and history of human artistry as they are about the stories we tell ourselves about who we are. Myths of creation and ascendancy appear across his oeuvre, weaving together references to Frankenstein’s monster, a tribe of fallen angels from the Book of Enoch, Greco- Roman deities in vibrant shades of blue and rose-madder. Through rough patchworks of torn fabric and inky spills of vivid colour, a strange race of figures emerges. Charcoal swathes define faces and figures who seem to move within their frames, submerging us in the artist’s process: stretching and coiling and twisting their bodies, multiple eyes meet the viewer’s gaze.

In The Flying Man Icarus, son of the trapped artisan’s son Daedalus, soars high above a brilliant sky stained with sharp rivulets of cobalt blue, green and gold. Anxieties of ambition and purpose crystallise in the figure of a man who flew too close to the sun: ‘These myths about flying men, they recur in almost every culture,’ Crews-Chubb explains. ‘It really speaks to how desperate we are, as human beings, to go beyond our limits. To fly.’

Crews-Chubb discovered his signature style by chance, after deciding to cut out a fragment from a painting he was dissatisfied with. He has refined a collage-based approach to painting that draws on the physicality of Abstract Expressionism and the pictorial language of Cubist collage, combining sand, glue and pumice gel with oil paints and oil sticks. He works on each painting in cycles: intense and all-consuming periods of work see him paint and tear the canvas with his hands, haphazardly gluing and melding the materials together, letting the painting crack, dry and fuse over a period of weeks before he returns to the canvas to pour ink and draw over its coarse granular textures.

The Humanoid paintings, seen for the first time here, break with the painterly illusion of the painting’s two-dimensional surface. A sculptural, abstract approach to the figure replaces the organically curving creatures seen in Crews-Chubb’s larger paintings; Crews-Chubb carves lakes of paint and sand away from the canvas, using absence to define silhouettes of figures at the center of his canvases. Lighter and more minimalist in configuration, the Humanoids juxtapose lush pools of stained ink and watercolour with slanting anatomical fragments that evoke Dada dissections of the body through magazine collage.

The exhibition is also accompanied by a series of study drawings for the Humanoid paintings in which figures seem to assemble themselves before our eyes. We see Crews-Chubb become more formally daring as he explores abstractions of the body in slashing ink strokes that evoke the palpable urgency and emotional angst of Egon Schiele’s drawings. Crews-Chubb says, ‘These figures are full of conflict, they ask more questions than provide answers. Their pictorial complexity is a symptom of that conflict.’ Melding the ancient with the modern, the paintings speak to the universality of our shared passions and torments, the threads linking myths together across time and culture.

Daniel Crews-Chubb
Daniel Crews-Chubb (b. 1984, Northampton, UK) creates formally innovative, experimental multimedia paintings, incorporating collage elements and non-traditional materials. Formal influences drawn from the legacy of Modernism overlap with a visionary world of amorphous figures, building on mythological themes and the psychological unconscious. Crews-Chubb will present a major solo exhibition in the UK at the Ashmolean Museum, Oxford in 2023, followed by a solo exhibition at the Long Museum, Shanghai in 2024.
This year Crews-Chubb’s first institutional exhibition in the UK, The Consequences of Play, premiered at Wellington Arch commissioned by English Heritage Collection. Other recent solo exhibitions include Solitary Us: Couples Paintings at Roberts Projects, Los Angeles (2021); Flowers, Choi and Lager Gallery, Seoul (2021); and Cave Continuum, Timothy Taylor, New York (2020).