Roberts Projects presents Solitary Us: Couples Paintings, an exhibition of nine mixed-media collage paintings by artist Daniel Crews-Chubb. This new body of work, produced during the lockdown period in the UK amidst the COVID-19 pandemic, continues Crews-Chubb’s exploration of human relationships and are self-reflective and reactionary to the sense of isolation the artist experienced at the time. This exhibition follows Chariots, Beasts, and Belfies, the gallery’s inaugural presentation with the artist in 2018. 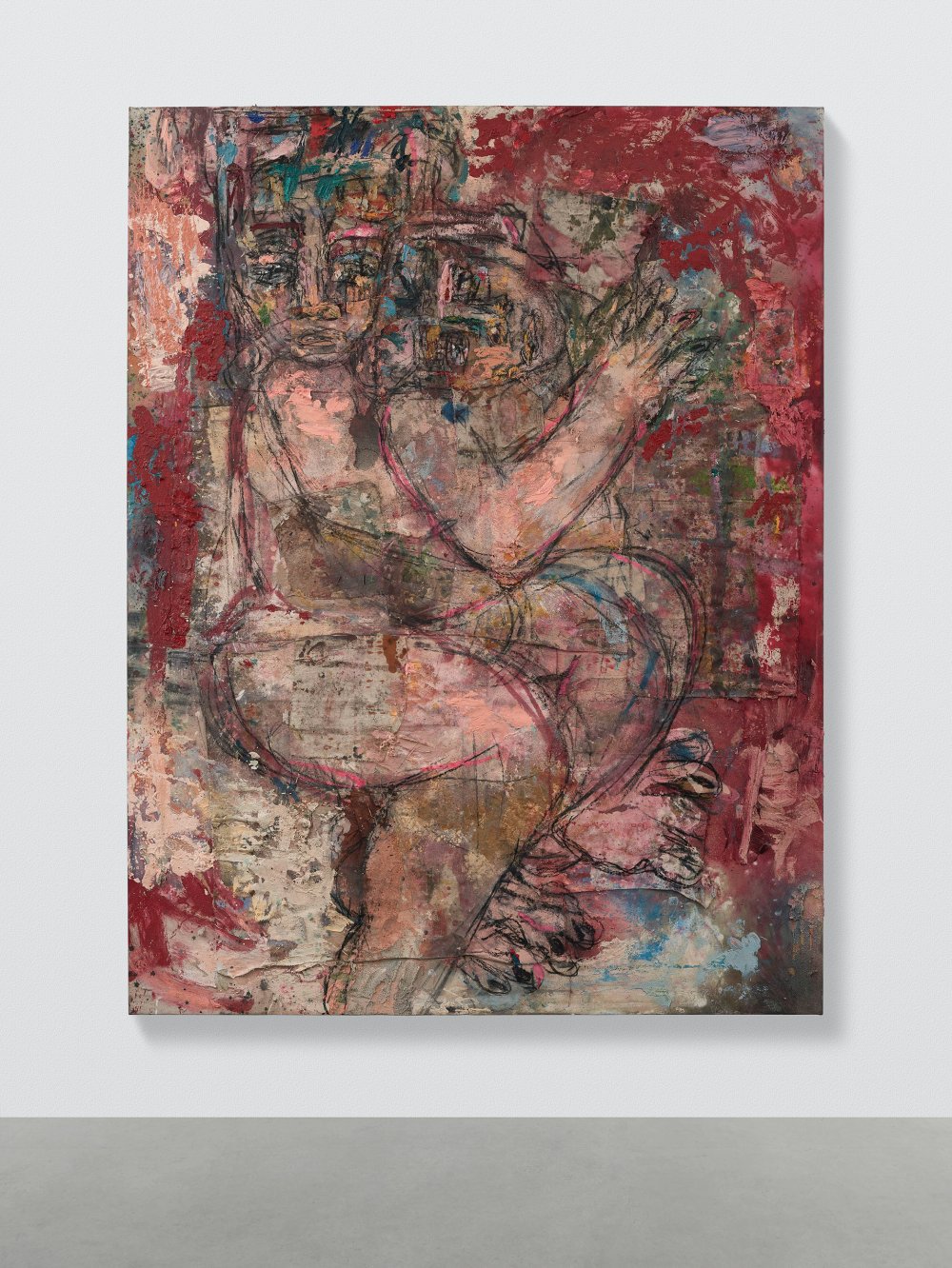 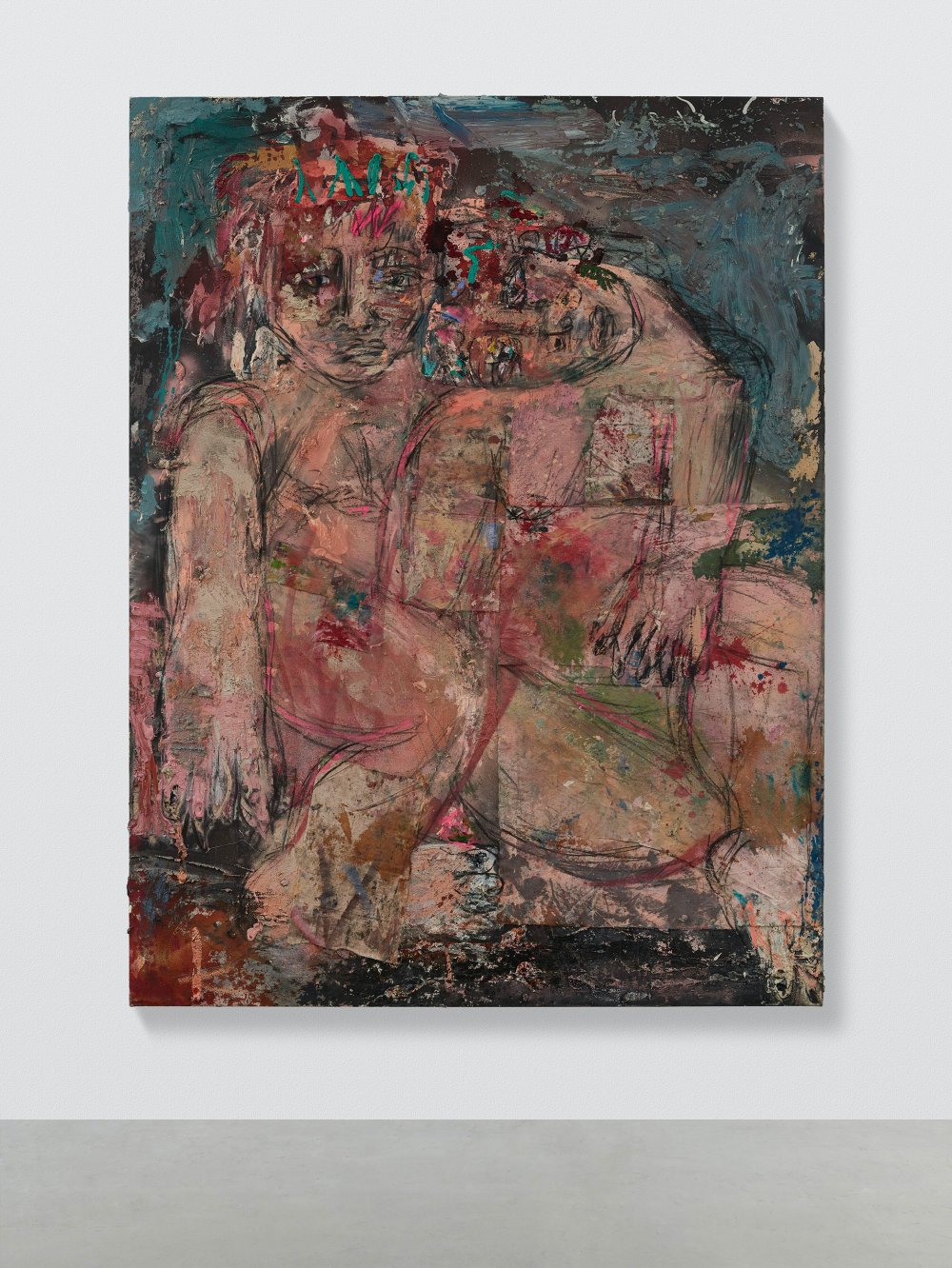 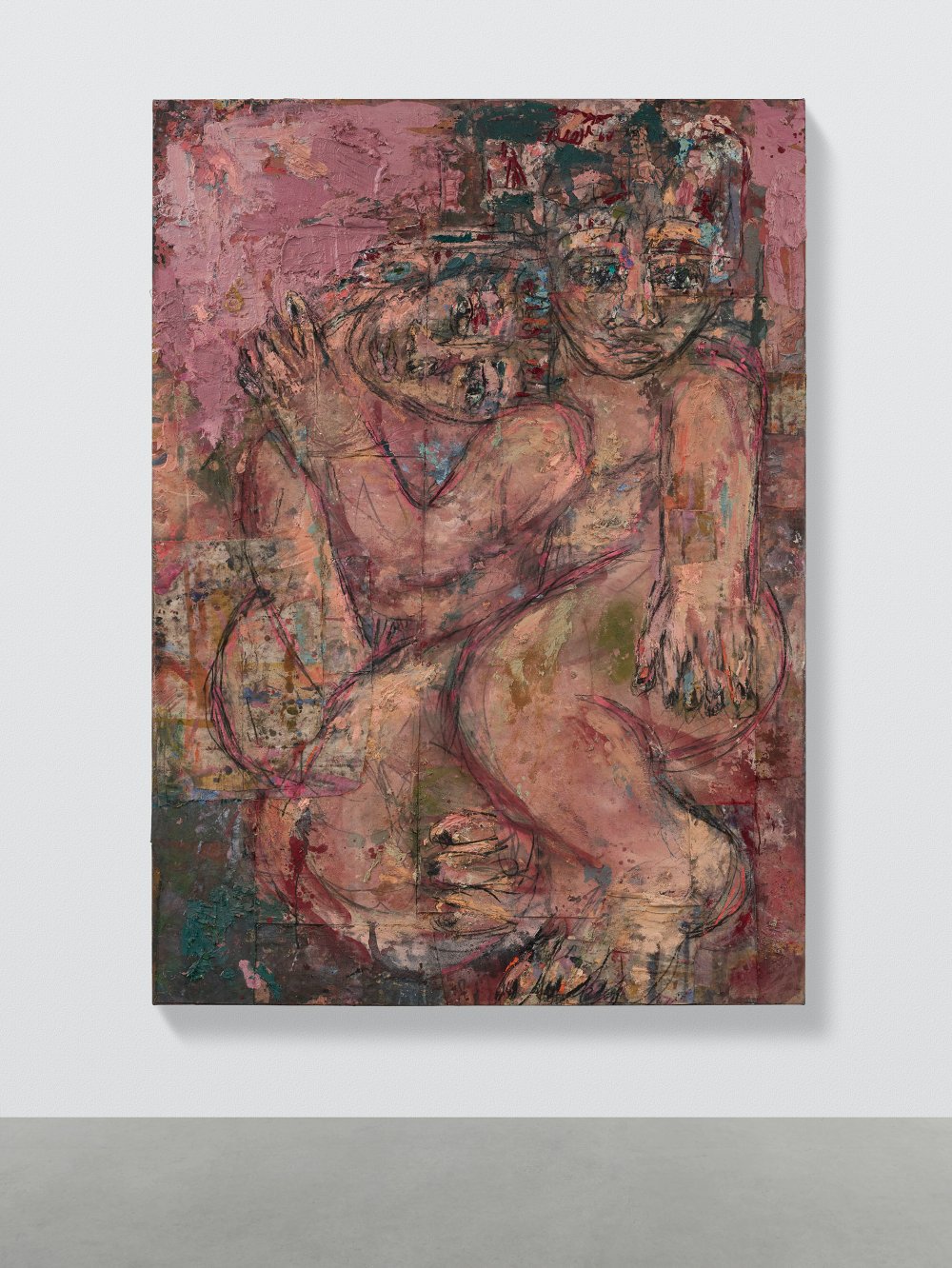 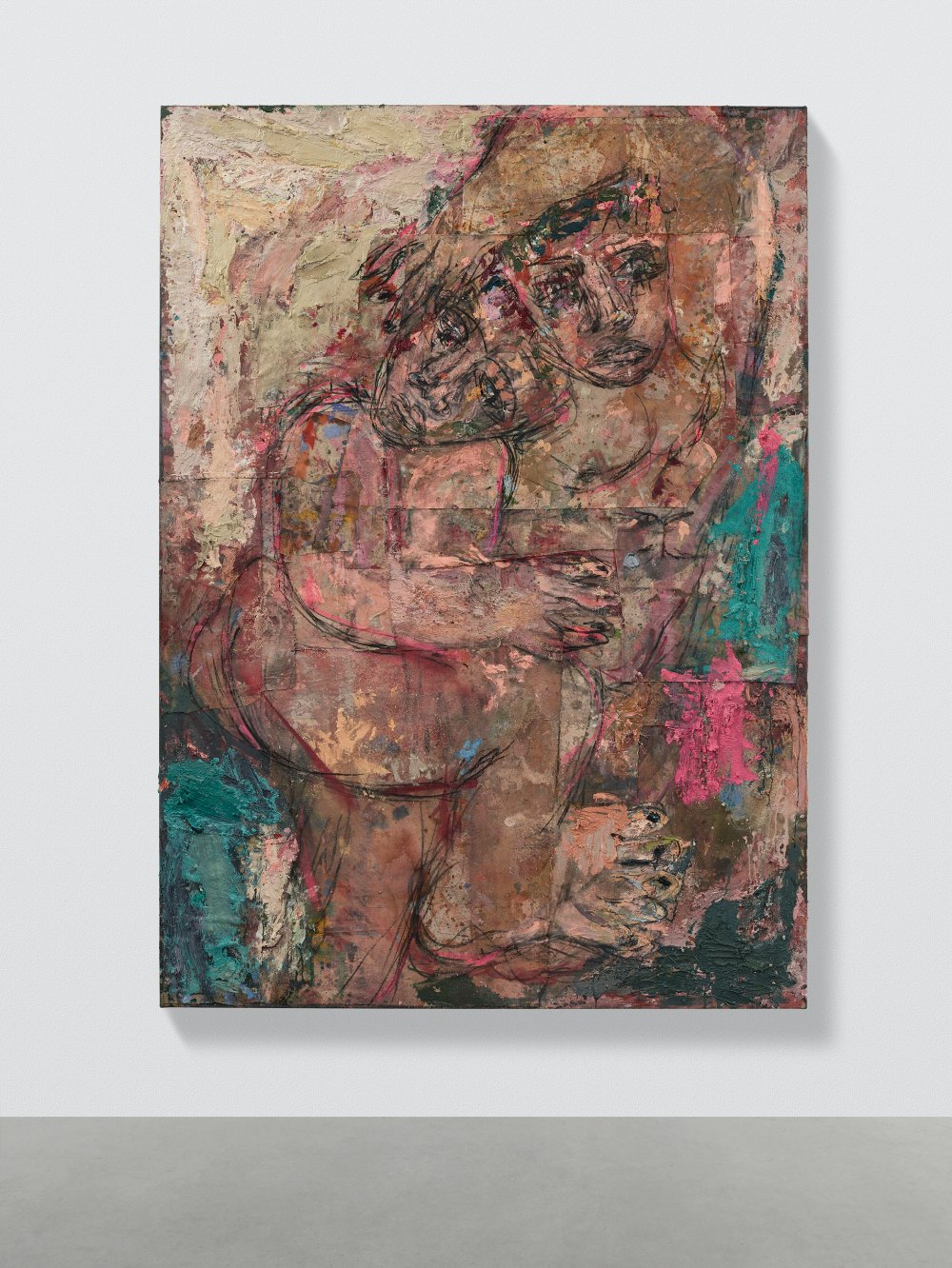 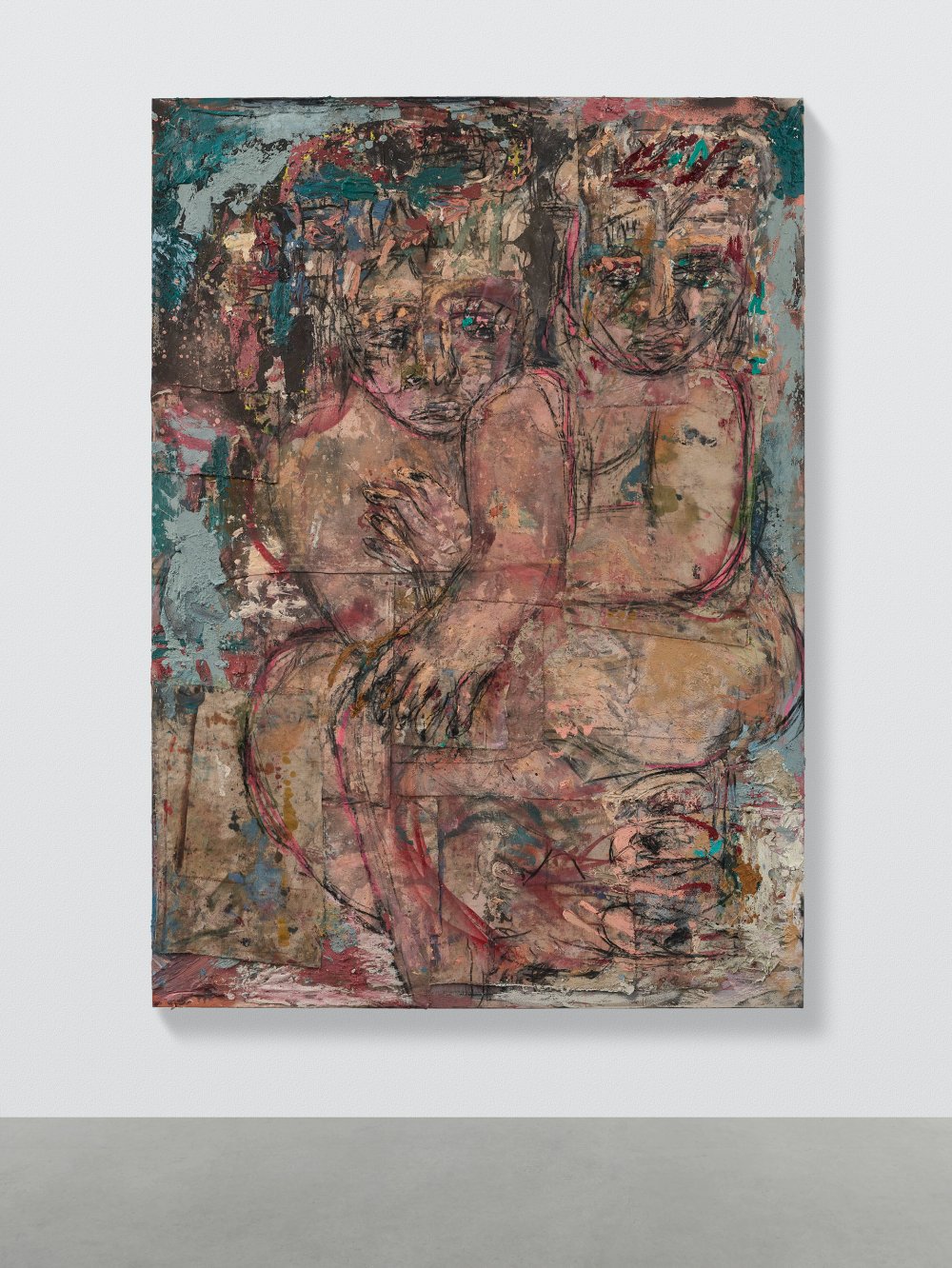 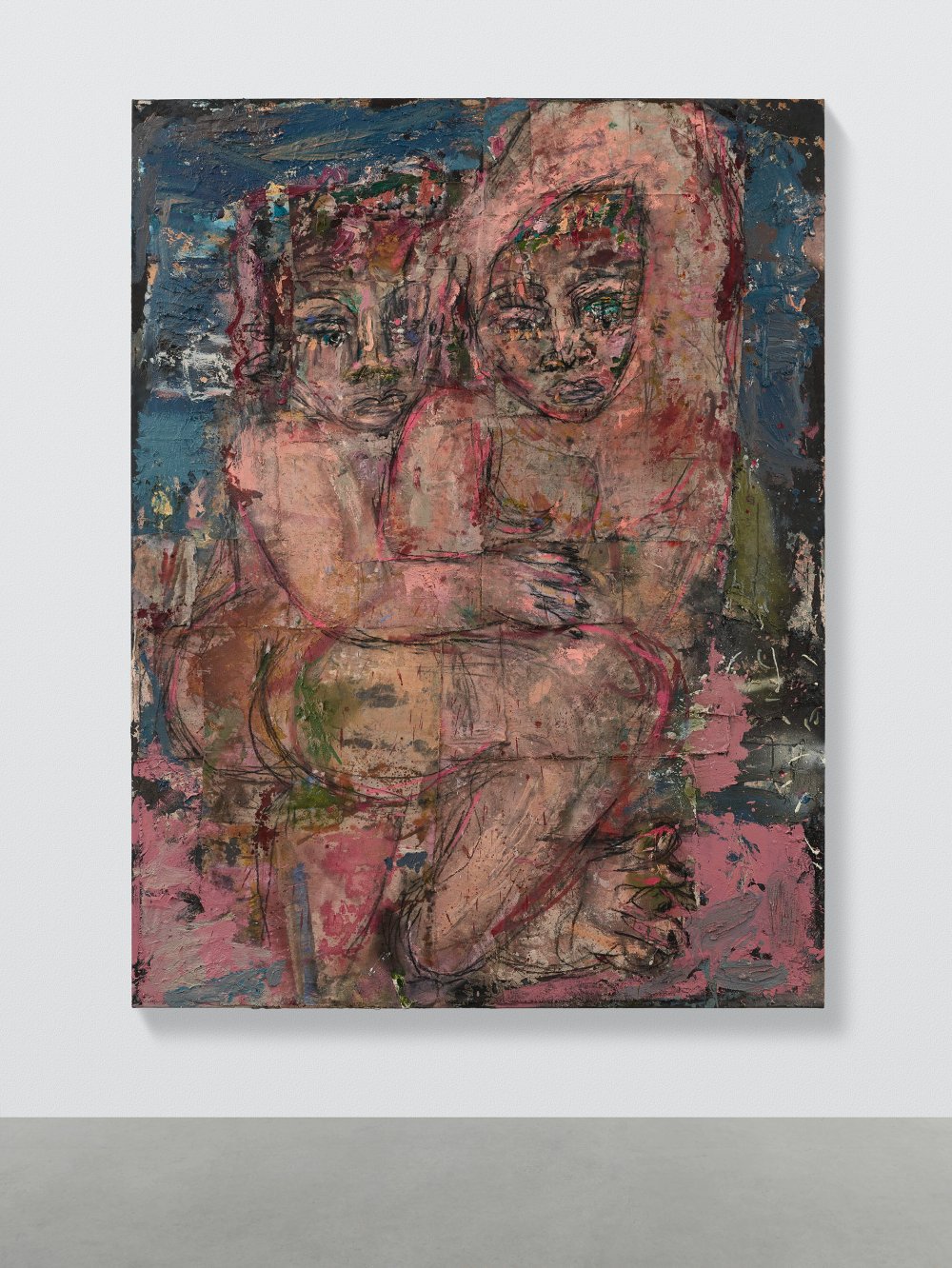 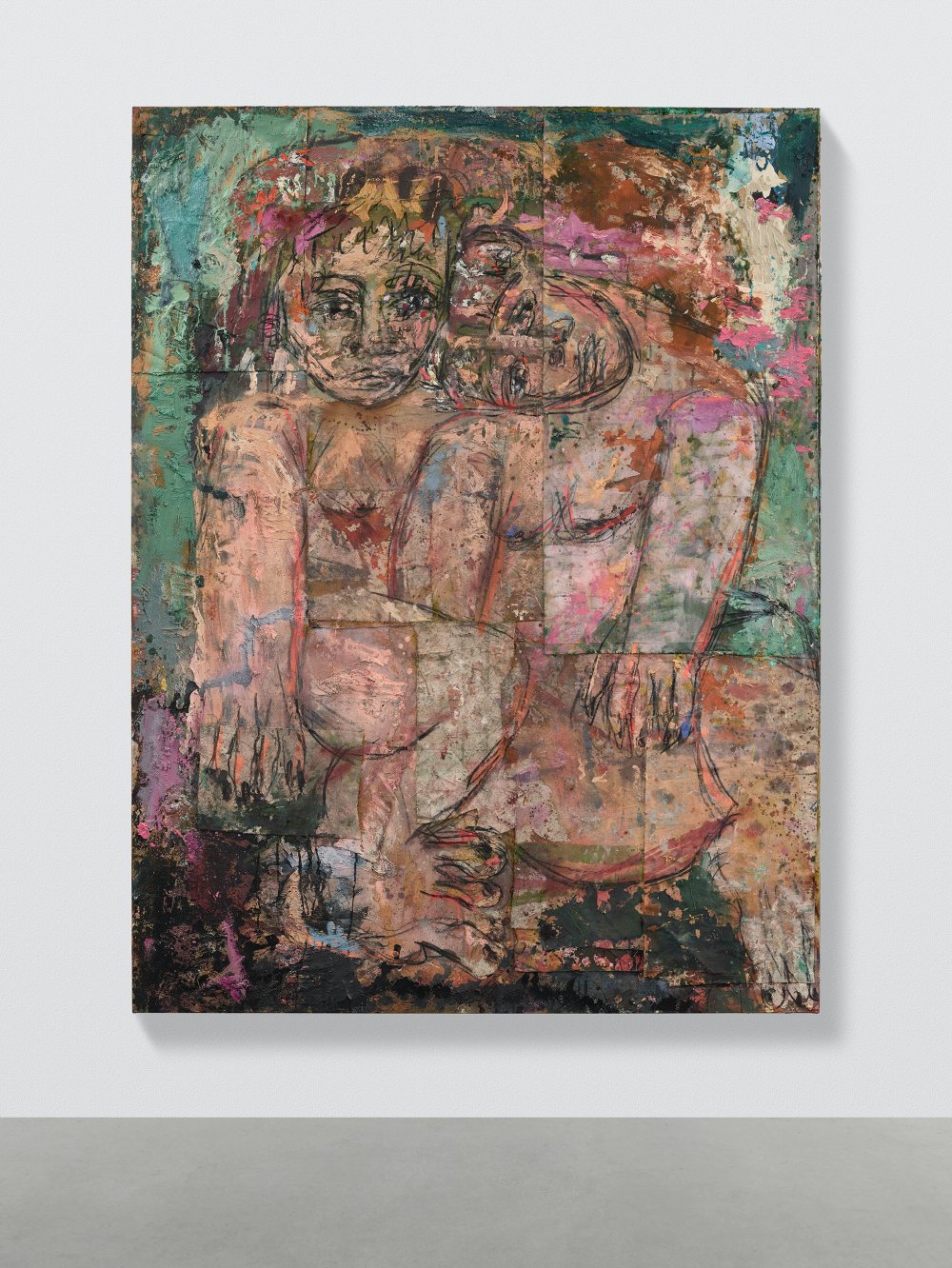 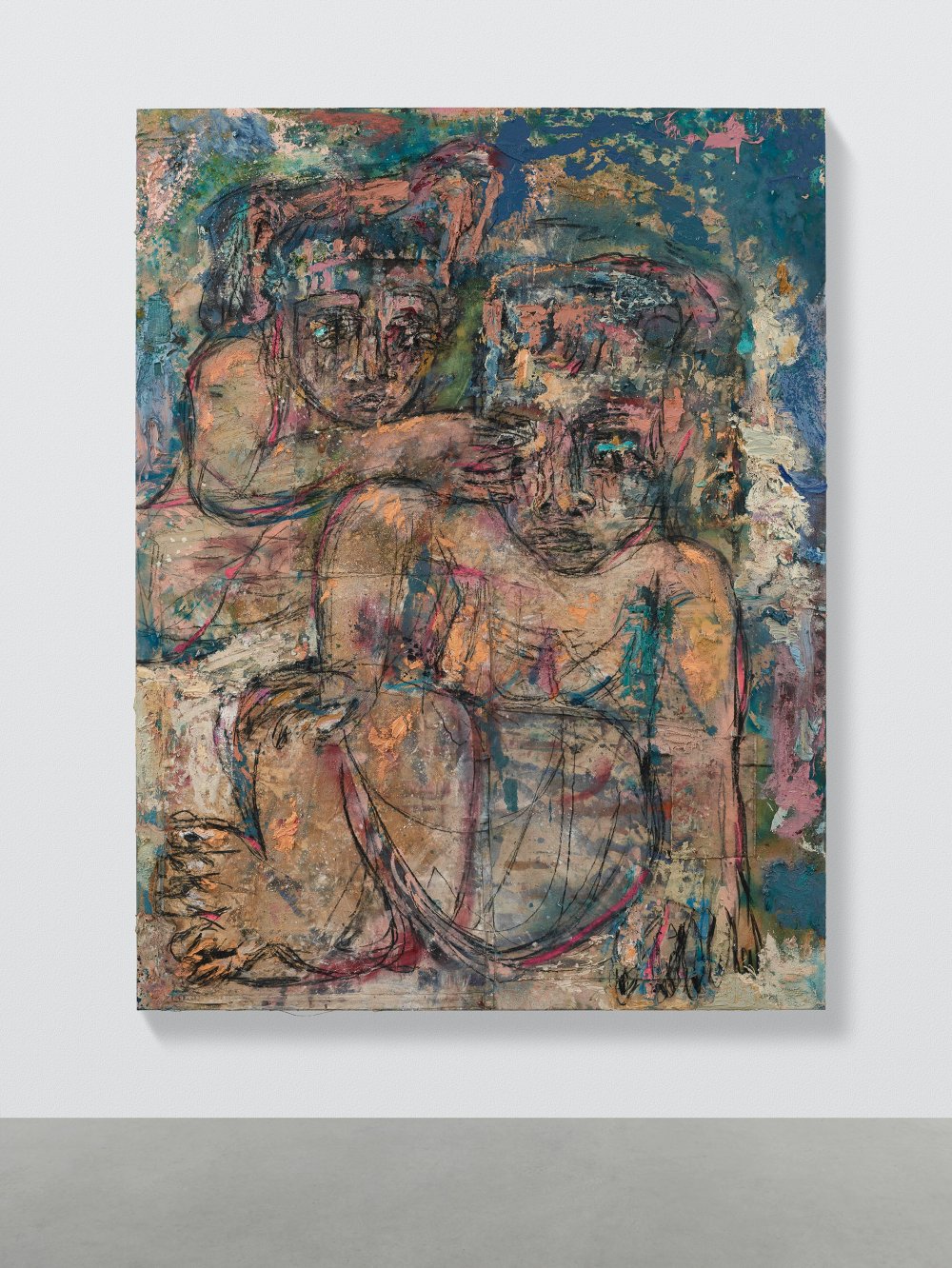 Daniel Crews-Chubb
Where the Wild Things are (Greek blue), 2021 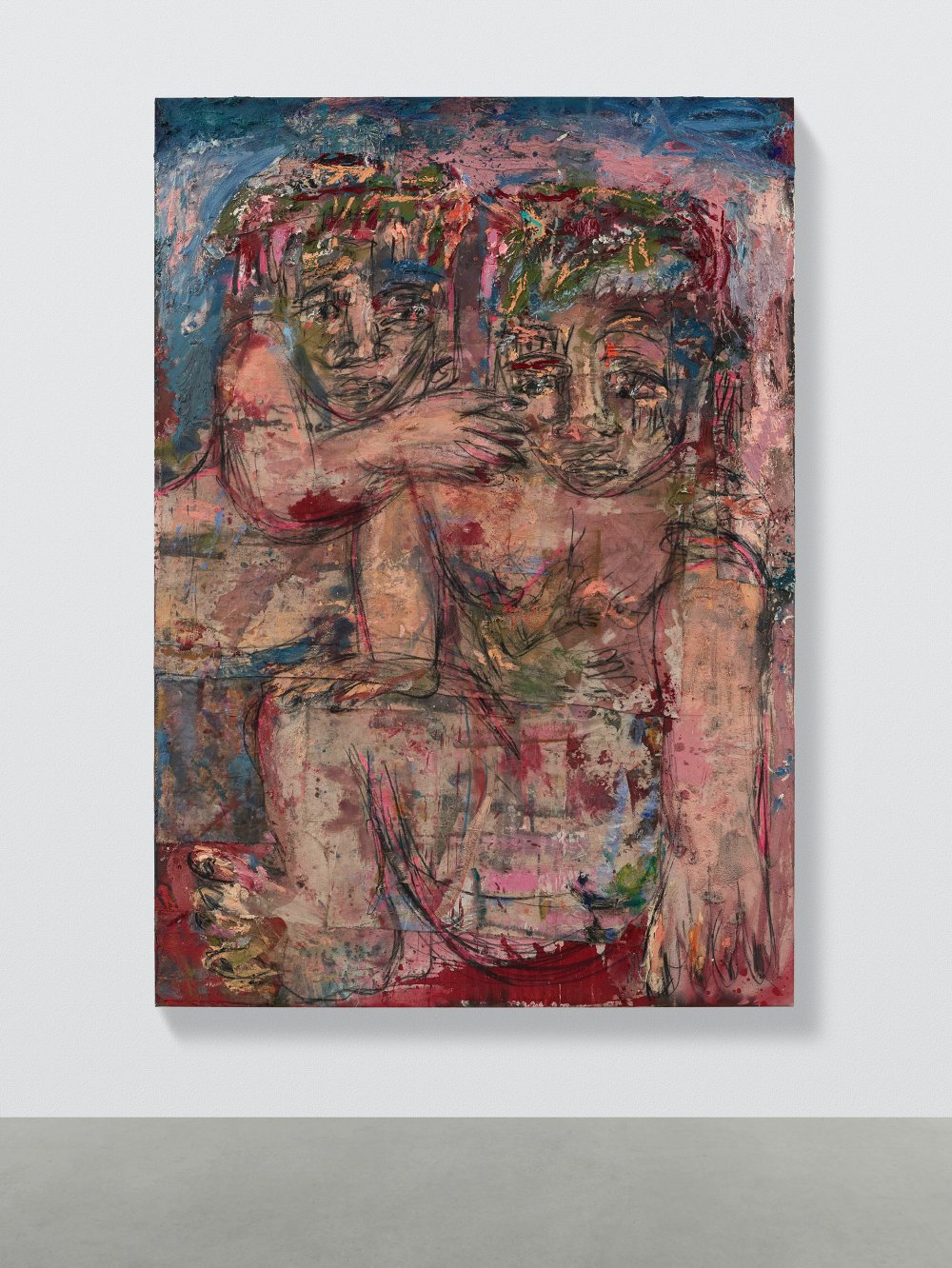 Daniel Crews-Chubb
Where the Wild Things are (red, blue, pink and military green), 2021 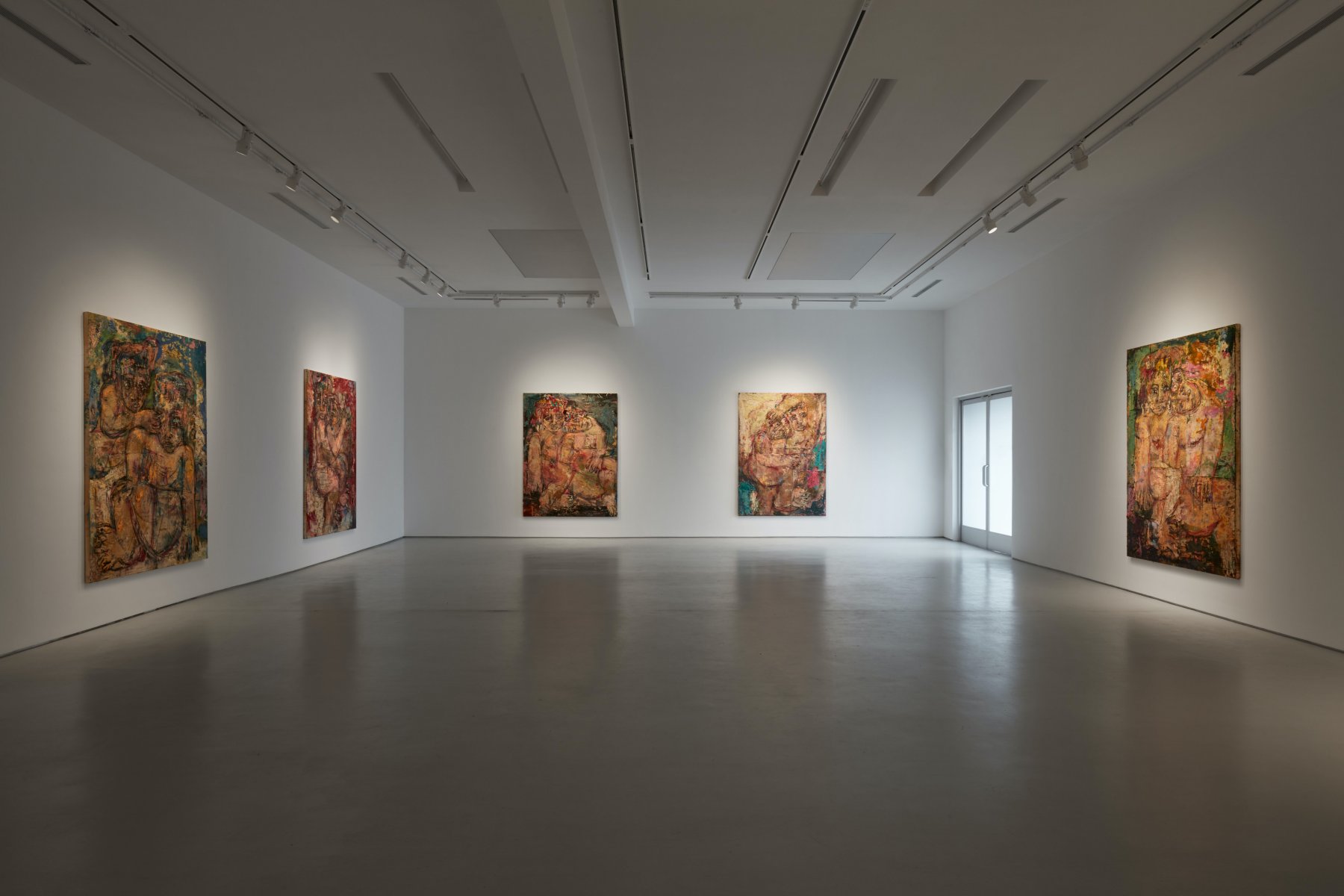 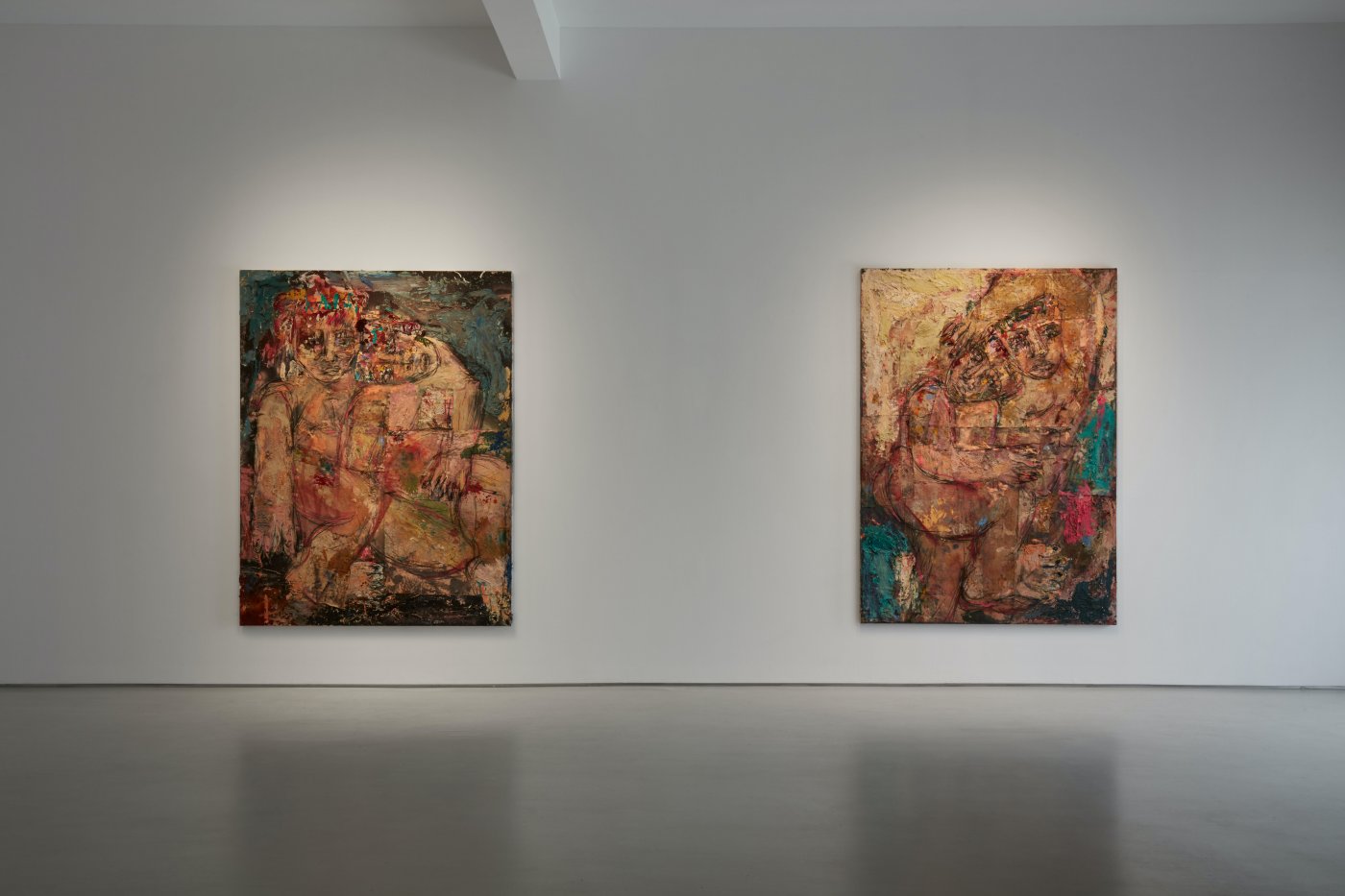 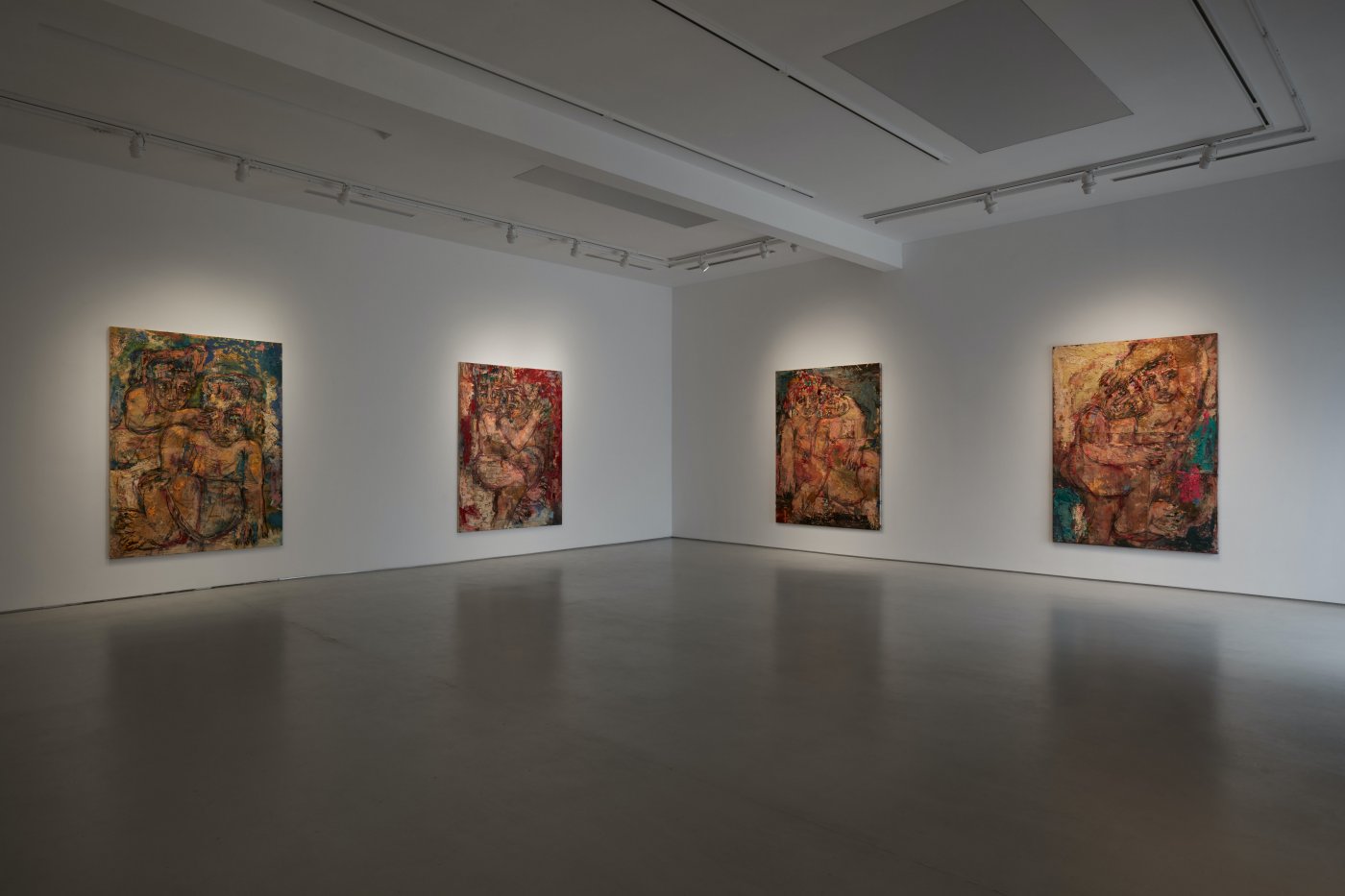 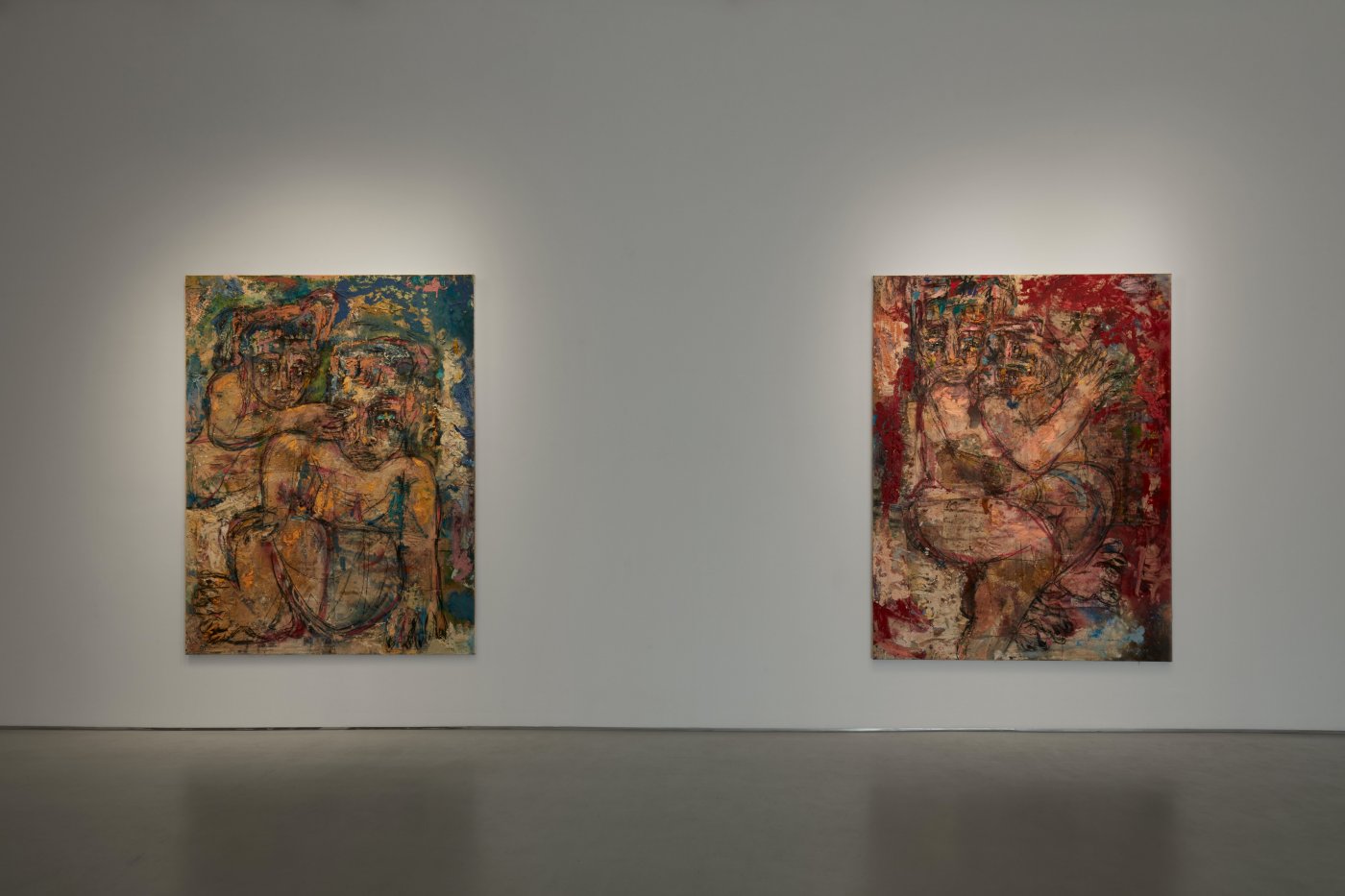 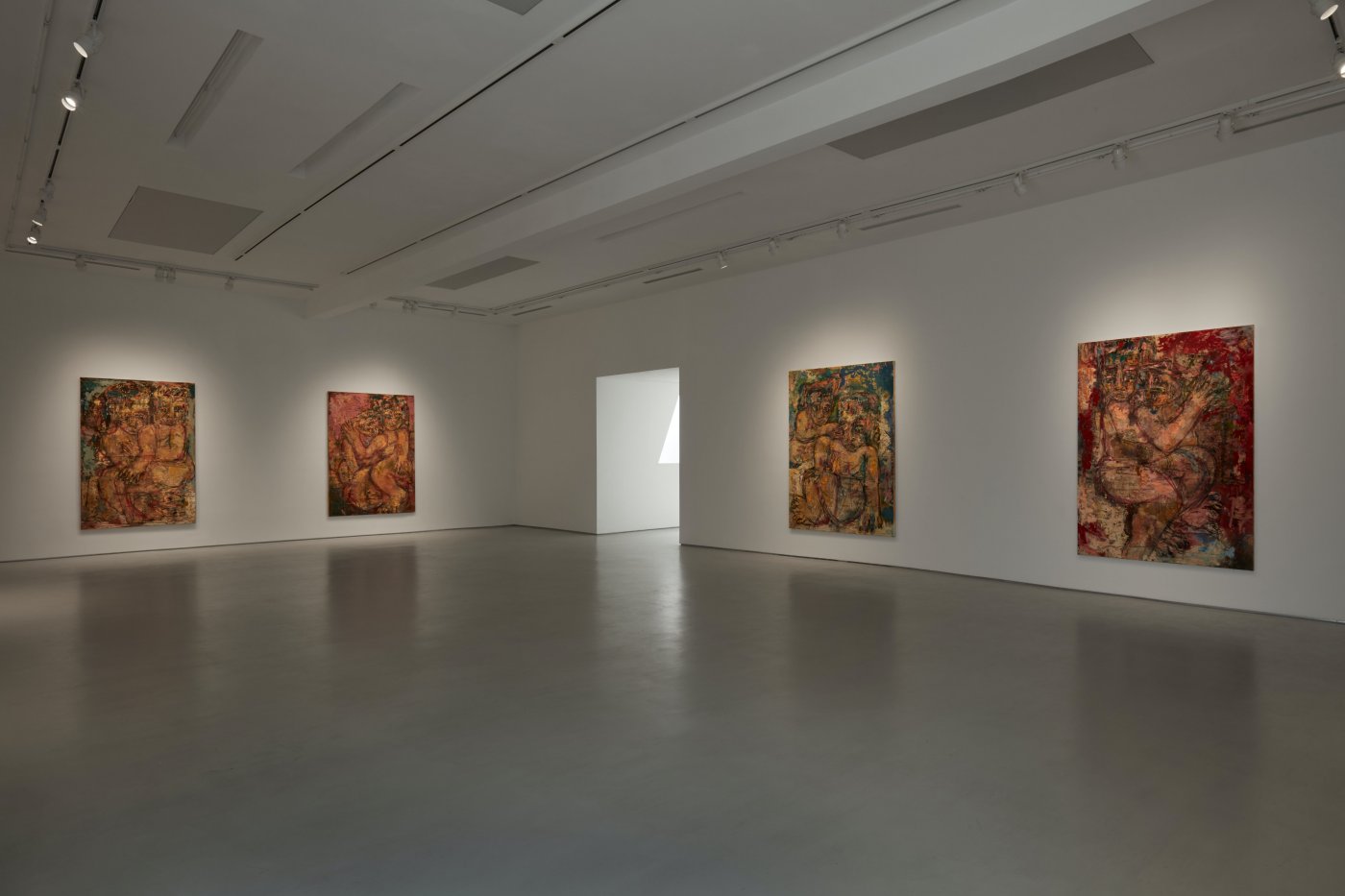 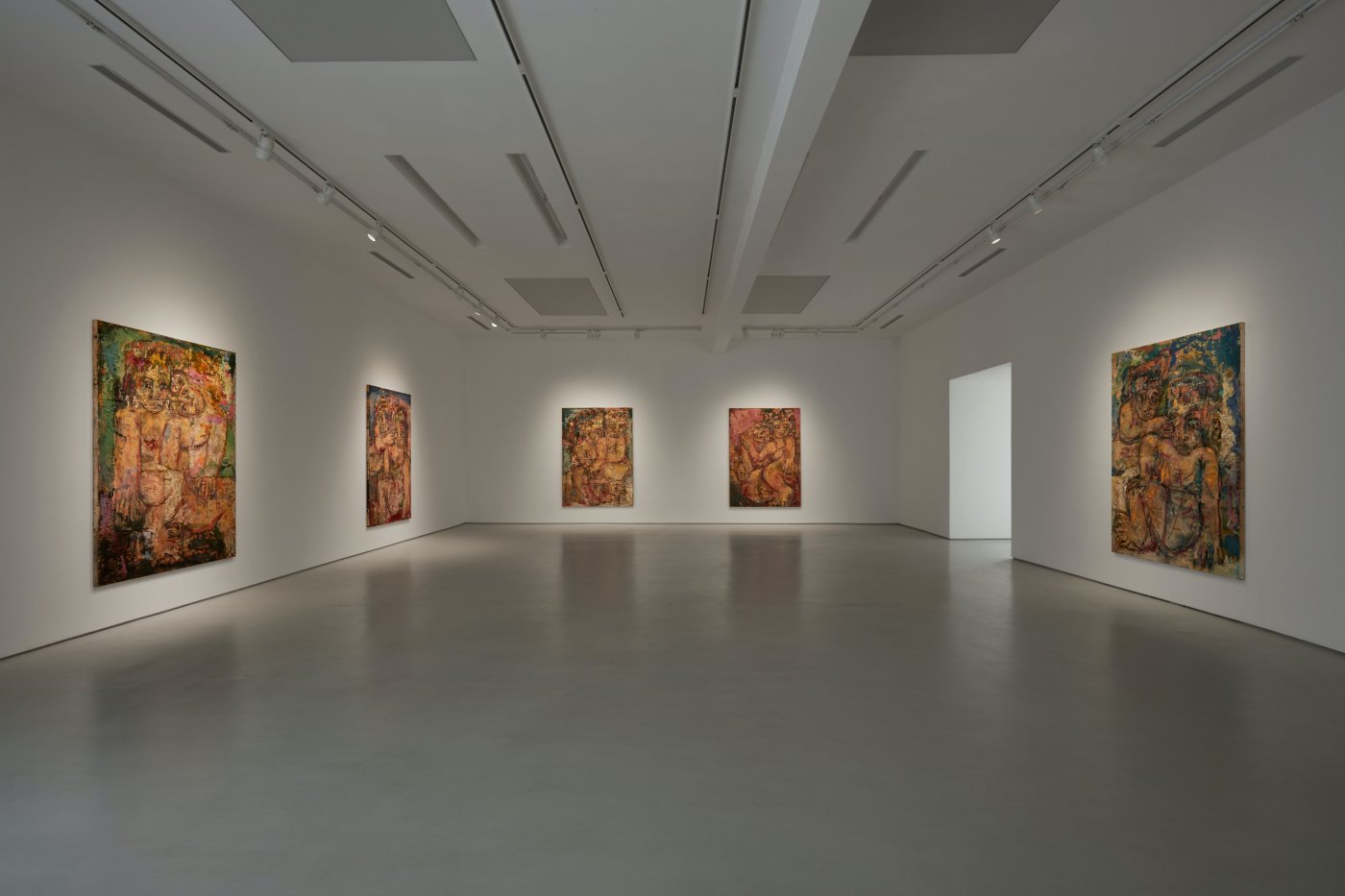 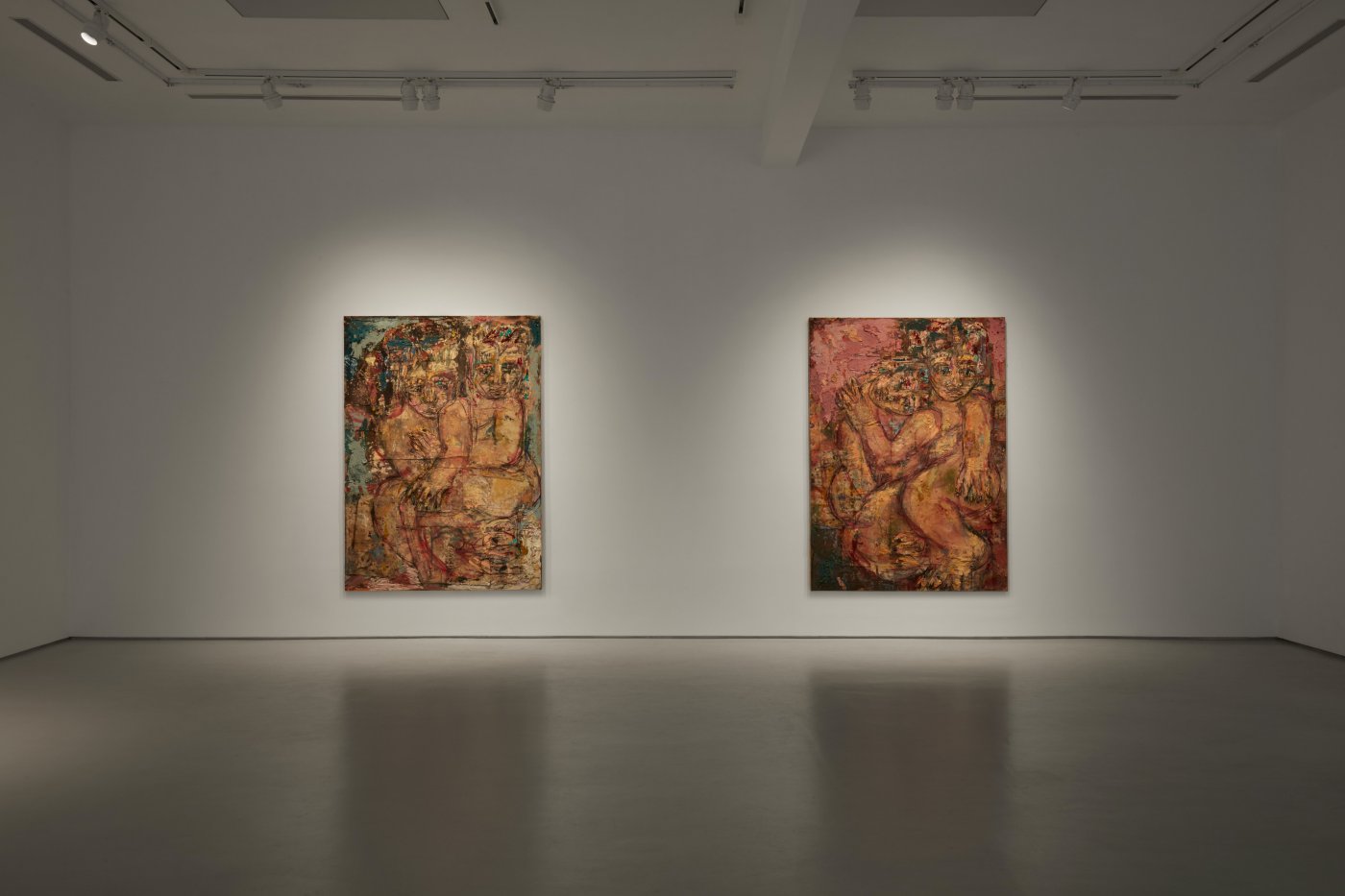 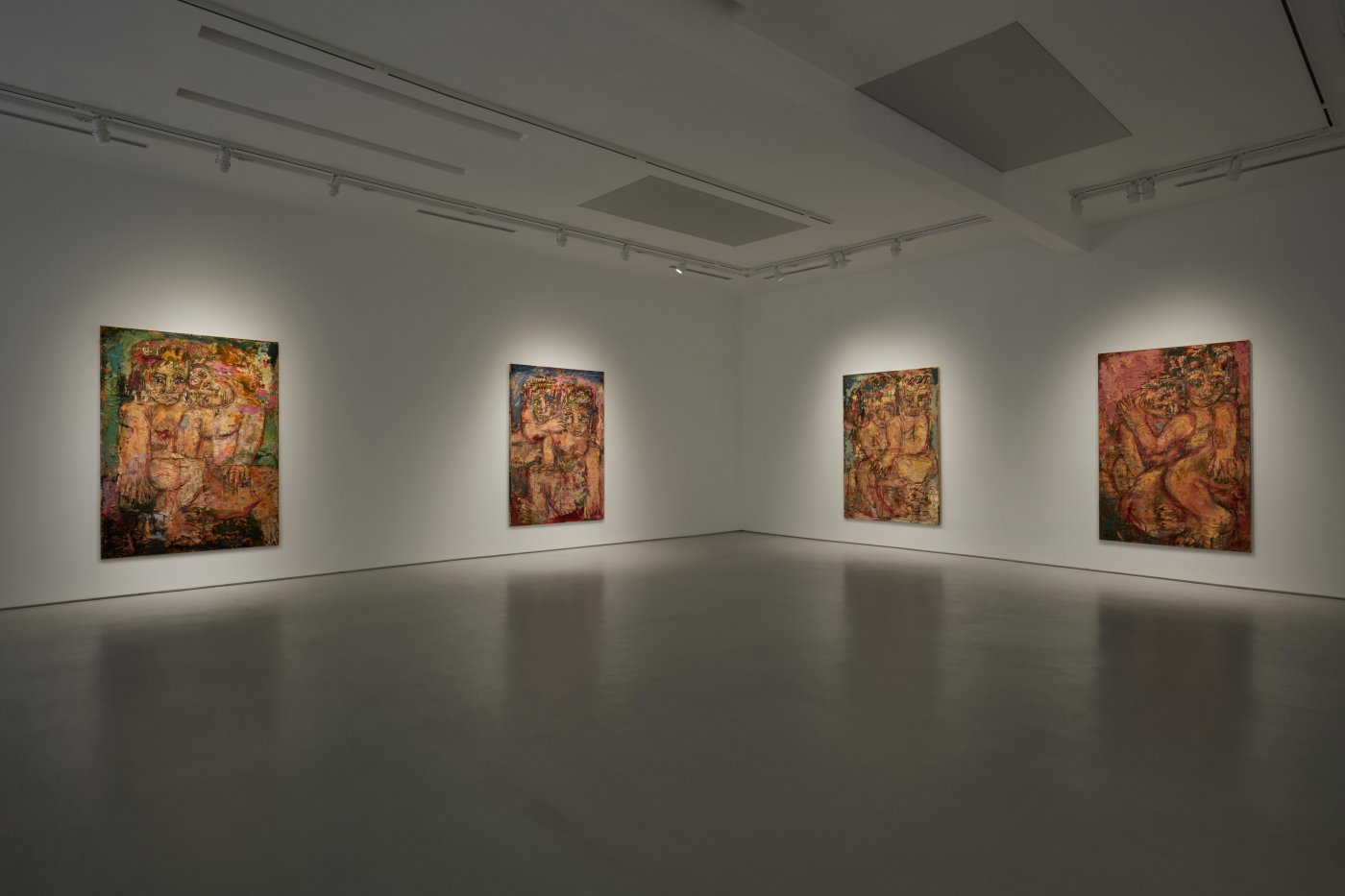 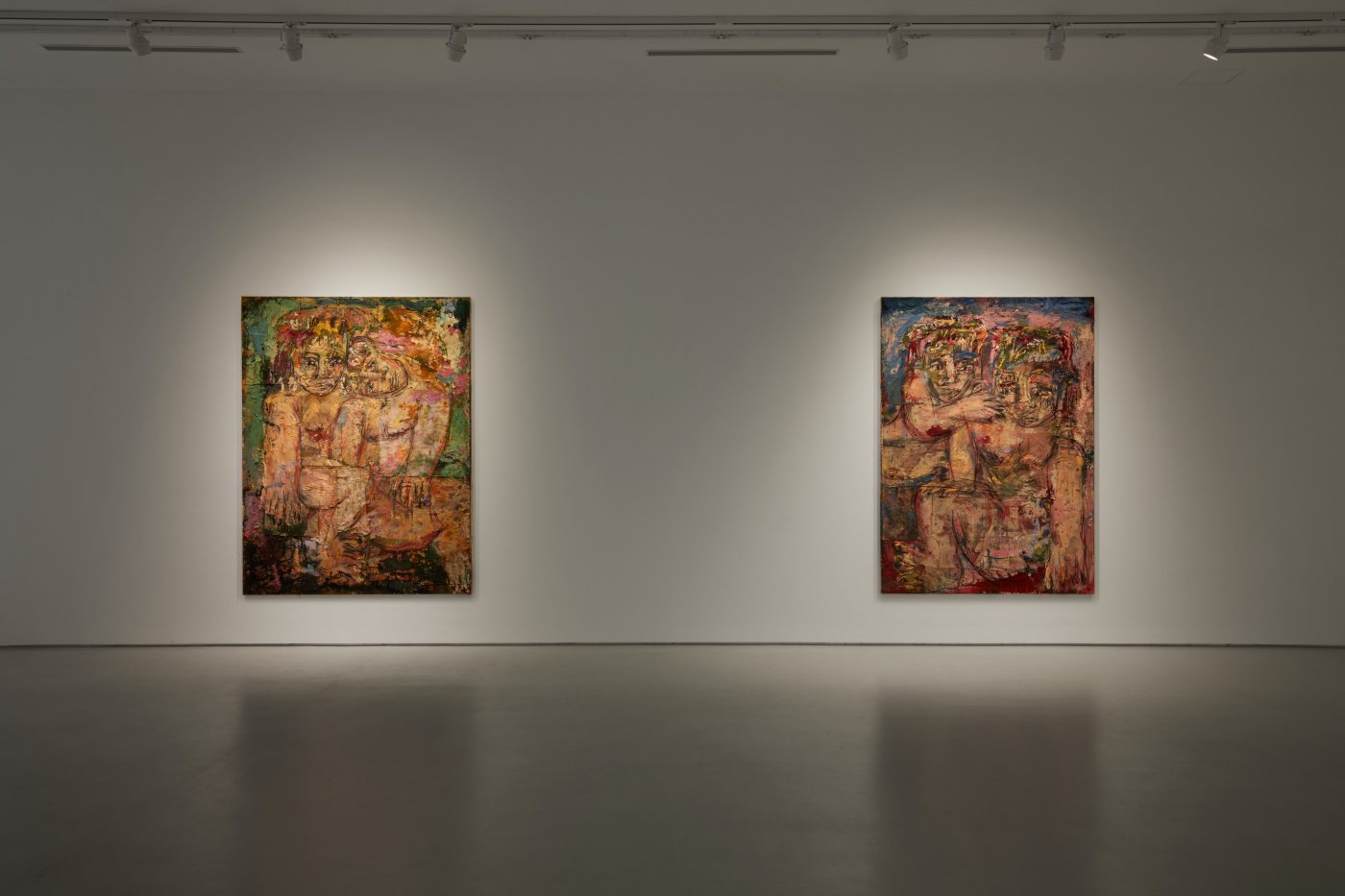 Mimicking statuesque poses repeated throughout history, Crews-Chubb’s Couples paintings feel nostalgically familiar. Inspired by ancient artifacts depicting gods, goddesses and mythology in art, in addition to human-animal hybrids, or therianthropes, and other hybridized creatures, Crews-Chubb’s figures reinterpret these stories while accentuating their heroic and powerful themes. They combine the idealizations of beauty and harmony of the Romanesque period with the simplicity and bold lines from ancient Egyptian art, while including direct references from Dogū pottery from the Jōmon period of prehistoric Japan, Celtic masks from the Bronze Age, headdresses and helmets inspired by pre-Columbian and Roman artefacts, and—perhaps most relevant to the Couples paintings—the Sarcophagus of the Spouses, a late sixth-century BC Etruscan anthropoid sarcophagus from Caere.

Crews-Chubb then weaves modern art influences, including the emotive language of Ab Ex, the pure color and form of Fauvism, and the stylistic vision of Modernism, as well as pop culture action figures from his childhood which lend themselves readily to an interpretative lens through which to view his work. Paradoxically, while his paintings look back and connect across time, they are devoid of any specific culture, identity or gender; there is no muse. Instead, the artist sees his figures as motifs, a compositional framework to experiment with.

The Couples paintings exist as a continuum, advancing the artist’s previous lexicon exploring character pairings, or couplings within social and cultural contexts; Zumbi and Belfie (2018), Jigs and Reels (2016), Dancing Yetis (2019), and more recently, Where the Wild Things Are (2021). His new series offers a more expansive look into the universality of this familiar theme, while the ambiguity of the figures and their relationship cools the overall energy within the tableaux. Per the artist, “it’s visual language. Yes, I look at a lot of stuff, but it’s what you do with it that counts. I’m like a visual magpie, I like to steal, all artists do! Some things I see resonate with me and find their way into the work, it then becomes part of the vocabulary – it is all there for the taking.” Working in series, with multiple pieces being created simultaneously, he states how he “can literally cut bits off one picture and add it to another, which keeps things fun and harmonious and also takes that preciousness away.”

The process includes the use of oil paint, ink, pastel, spray paint, charcoal and rough pumice gel, which has a cement-like textural quality. He applies pigment to the surface by hand, whether by drawing with seemingly casual marks, throwing or stamping in pigment while his canvases are on the floor, or squeezing paint directly from the tube. As this develops, he collages strips of canvas to the now-wet painting face, breaking up the outer surface and incorporating various finishes, stains, and laminates. Certain areas of canvas are left raw, which act as “breathing spaces” within the frantic activity. It’s an intuitive and unruly process according to Crews-Chubb, who works rapidly, ad hoc, on the floor or the wall, taking chances, changing his mind, experimenting, and enjoying the juxtaposition of the materials; thick impasto, raw material and scratchy charcoal lines. The surface of the resulting works, when finished, more closely resemble a sculptural patina or a Persian rug, cut up then pieced back together, rather than a traditional oil painting. Unconventionally beautiful, Crews-Chubb’s assortment of techniques and materials take on an aesthetic and rhythm of their own.

Daniel Crews-Chubb’s first major institutional show will open in the fall of 2022 at The Ashmolean Museum in Oxford, UK, and he recently opened, in June 2021, The Consequences of Play, a year-long exhibit at one of London’s most famous landmarks, Wellington Arch in collaboration with English Heritage. The artist has been the subject of solo exhibitions at Timothy Taylor Gallery, New York (2020); Choi and Lager Gallery, Seoul (2021); Roberts Projects, Los Angeles (2018); Vigo Gallery, London (2016); and Galerist, Istanbul (2014). Recent group exhibitions include Something Happened, Powerlong Art Center, Shanghai, (2020); 45 at 45, LA Louver; Los Angeles (2020); Synchroncity, Roberts Projects (2020); Telescope, curated by Nigel Cooke; Hastings Contemporary, Hastings (2019); Tree, Vigo Gallery, London (2018); the inaugural exhibition at The Bunker, Florida, curated by Laura Dvorkin (2018); and ICONOCLASTS: Art out of the Mainstream, Saatchi Gallery, London (2017).