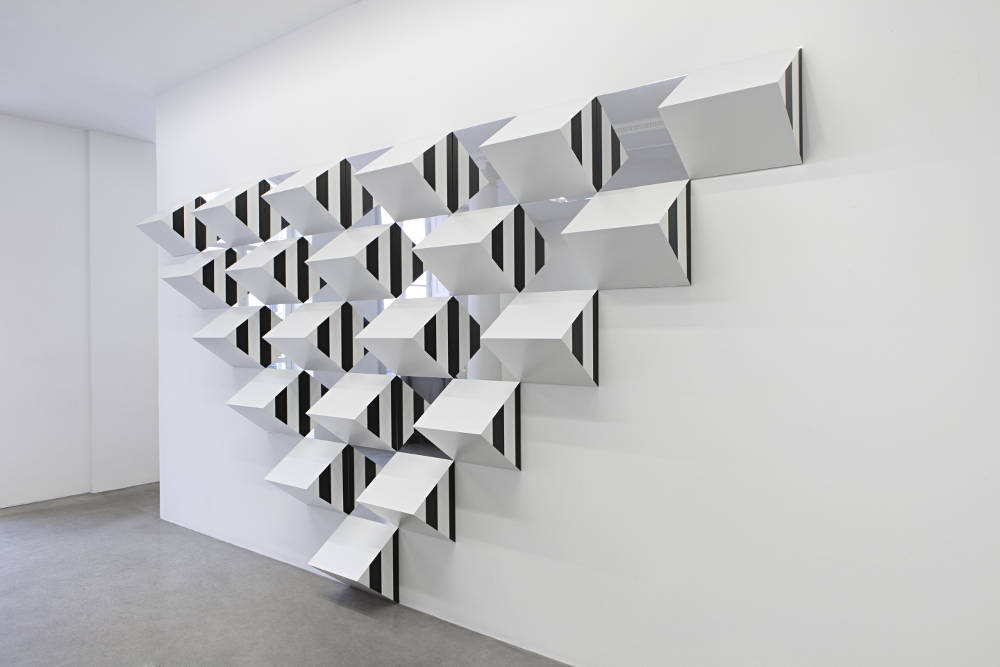 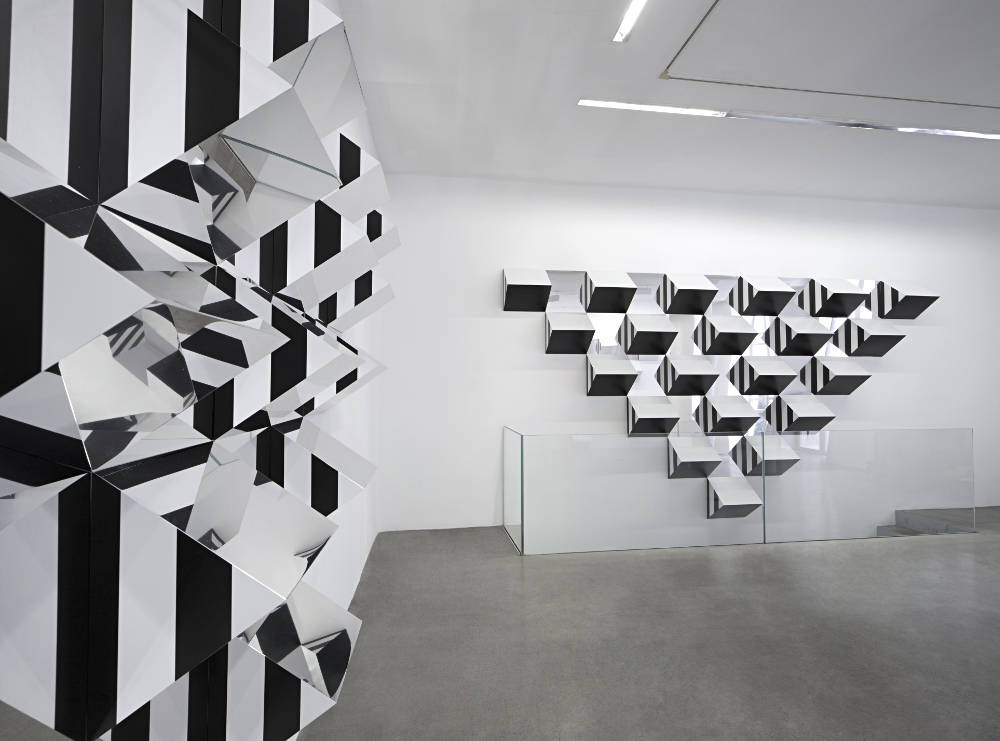 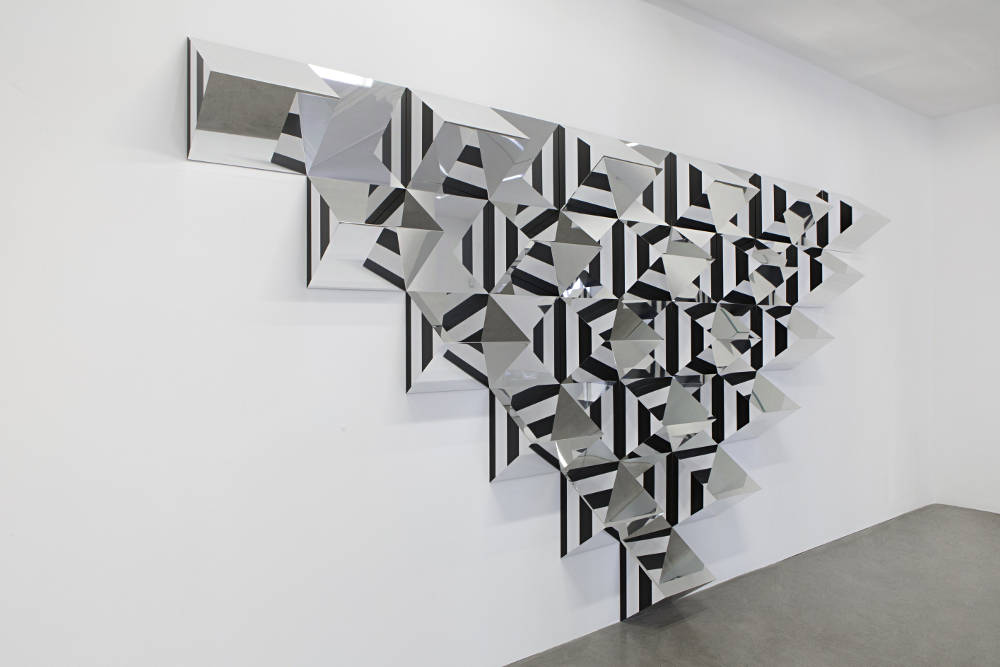 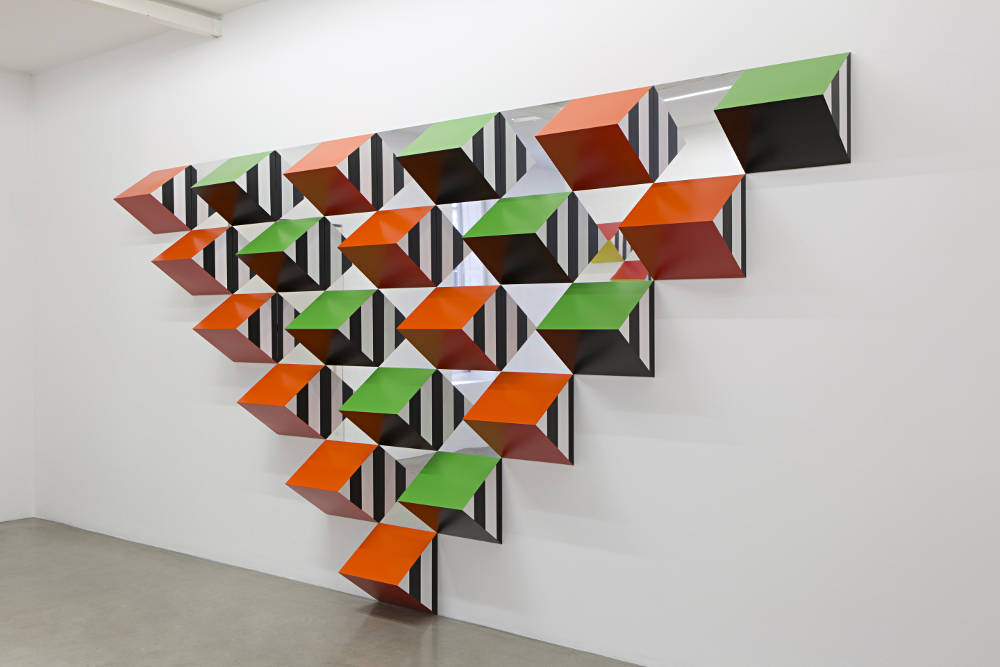 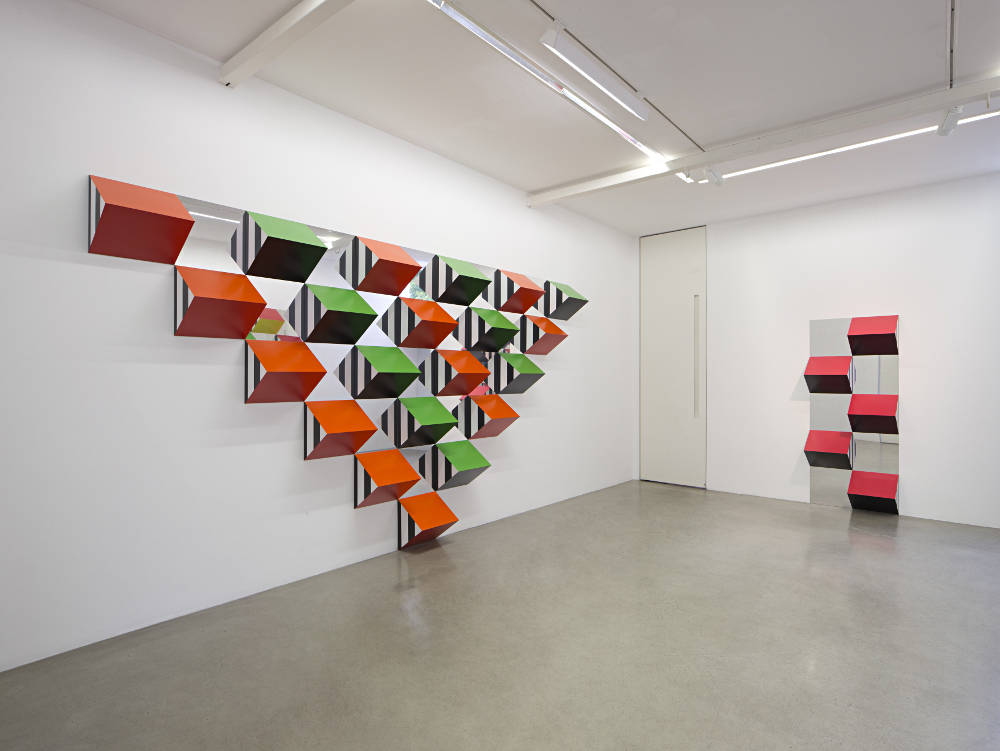 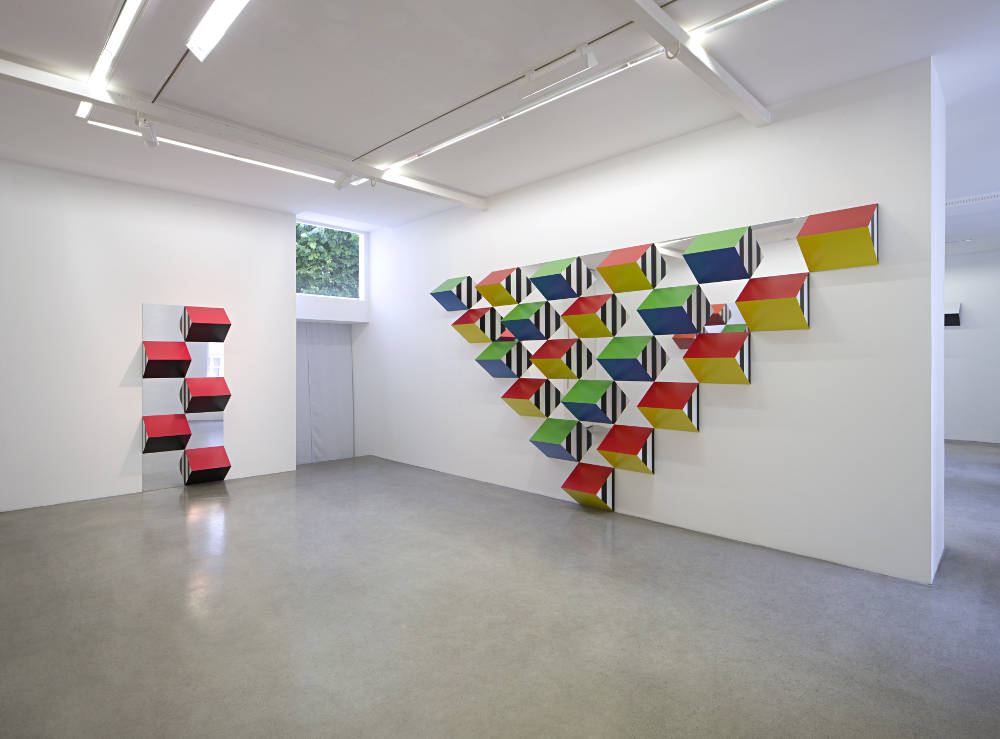 ‘There can’t be vision without thought.’ This statement by Daniel Buren underpins a considerable body of work that over five continents and more than fifty years has opened our contemporary ways of seeing to horizons as much inventive as they have been disorientating. For his fifth exhibition at the galerie kamel mennour, Buren is exploring new perspectives. ‘Pyramidal, hauts-reliefs, travaux in situ et situés, 2017’ reboots and reconsiders the stakes of the mythical form of the pyramid. The exhibition includes the seven-and-a-half hour long film, À contre-temps, À perte de vue, in which Buren presents a series of photos, films, interviews, explanations, memories, criticisms, and theoretical texts, drawing on works that he has made since the 1960s and grouped according to theme in alphabetical order.

Across the walls of the gallery, a succession of pyramids in high relief extend their three dimensions into mirrored prisms made of complementary colours or otherwise, each punctuated by 8.7 cm-wide black and white stripes. Here the famous visual tool that Buren invented in 1968 returns again in the construction of works capable of creating a wealth of new bearings for the inquisitive gaze. The colossal word ‘pyramid’, encrusted with its thousands-of-years-old archaeological history, is destabilised by the adjective ‘pyramidal’, which indicates a modus operandi. The pyramid’s pyramidal form is set in motion through the accumulation of adjoining primary units—the prism bricks—and the interactions of colour and light. Each pyramid is at once site specific and situated. In other words, according to Buren’s own artistic vocabulary, each creation depends absolutely on the place in which it appears and the presence, here and now, of the visitor. But each of these ‘Pyramidals’ is also ‘situated’, and hence susceptible, following certain rules, of transforming itself into a new work as a result of its dependence on a different environment.

Buren’s works can never be disengaged from the place in which they are shown. This interdependence between the variable place and the repetitive elements of the work are at the heart of his thinking: the work of art is not an object, it is rather a place from which to perceive the world. The history of art is a succession of formal adventures and so, one has to hope, of thoughts. However, this not a question of progress, but rather of changing points of view. The real is infinite and the reality of the moment is no more than a possible version, among a multitude of others waiting to be formulated. Buren’s work helps to redefine of the world. ‘Les Deux Plateaux’ (1986), in the courtyard of the Palais-Royal, nicknamed les colonnes de Buren, is the most famous example of this. In 1985, the work was subject to an avalanche of acrimony, its case was brought before the courts and it narrowly missed being demolished. Today the black and white marble columns are a revered site on the contemporary art map and continue opening the world to other possibilities. This was made evident three years after they had been put in place, with the unveiling of Ieoh Ming Pei’s Pyramide du Louvre, bringing together contemporary glass and metal with the historic stone of the old royal palace.

Buren’s activity as an artist is so widespread that mentioning his Golden Lion at the 1986 Venice Biennale, his site-specific exhibition at the Guggenheim Museum in New York in 2005, and his reinvention of the Pompidou Centre in Paris for ‘Le Musée qui n’existait pas’ in 2002 would be only the beginning of a very long list. It would in fact be very difficult, even impossible, and, it would have to be said, contradictory, to organise a complete retrospective of his works. For a good reason: the site-specific works are either destroyed when they leave the exhibition space they depended on, or they remain definitively tied to their place if they are permanent installations. In both cases they can’t be brought together at the same time in the same place. Buren’s fidelity over the years to his initial position poses the question of the trace. Just as the footprint indicates the path taken by the hiker, the absence of the work here signals its presence. It writes its trace in the real. Creation here doesn’t impinge on space through its materiality but rather produces effects of freedom. This is how a great artist inscribes the world: letting existence unfold itself in vaster patterns. Together, ‘Pyramidal’ and À contre-temps, À perte de vue explore forms and traces, a homage to the risk of living and the risk of creating:
‘Traveller, there is no path
The path is made by walking’. Here and now.