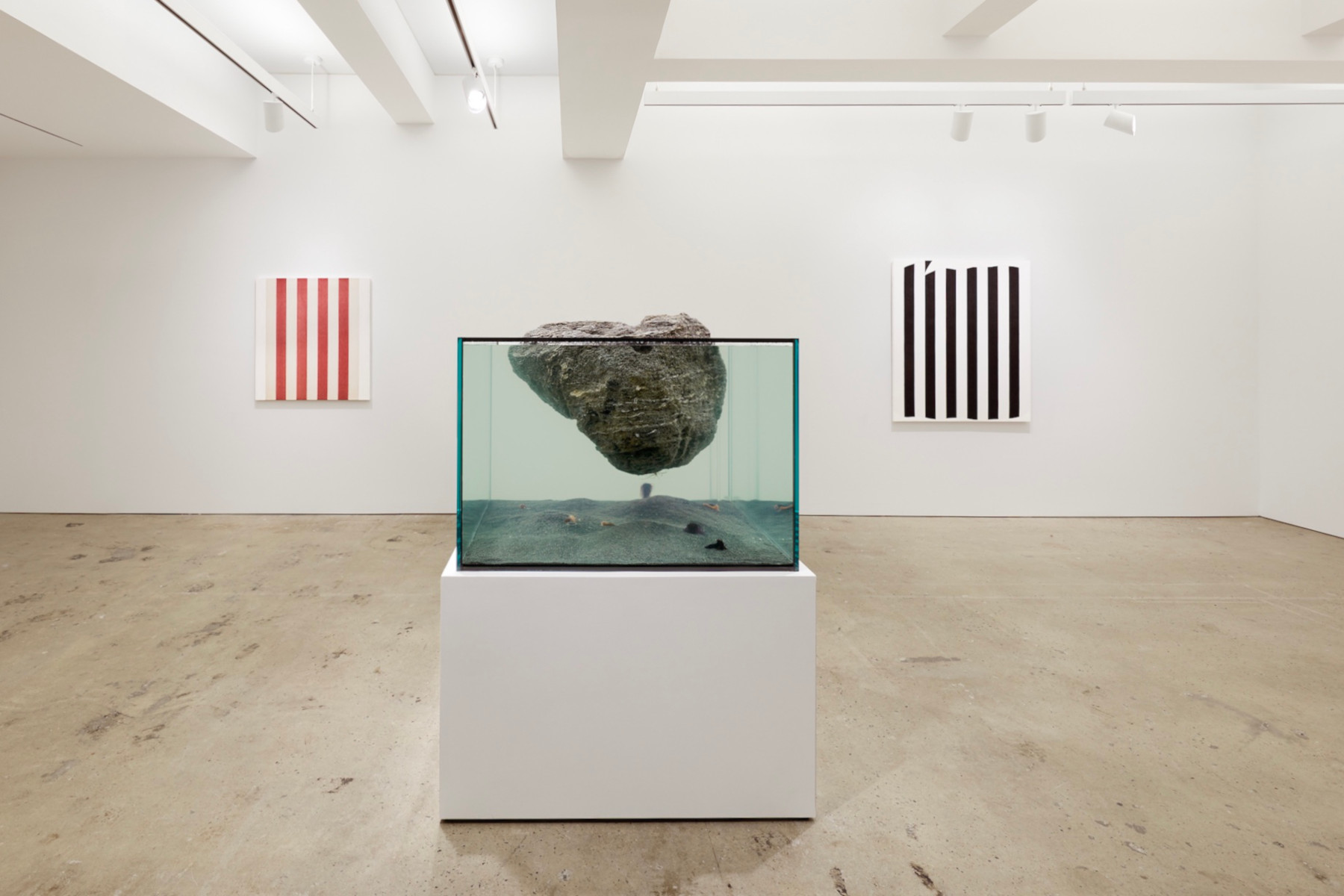 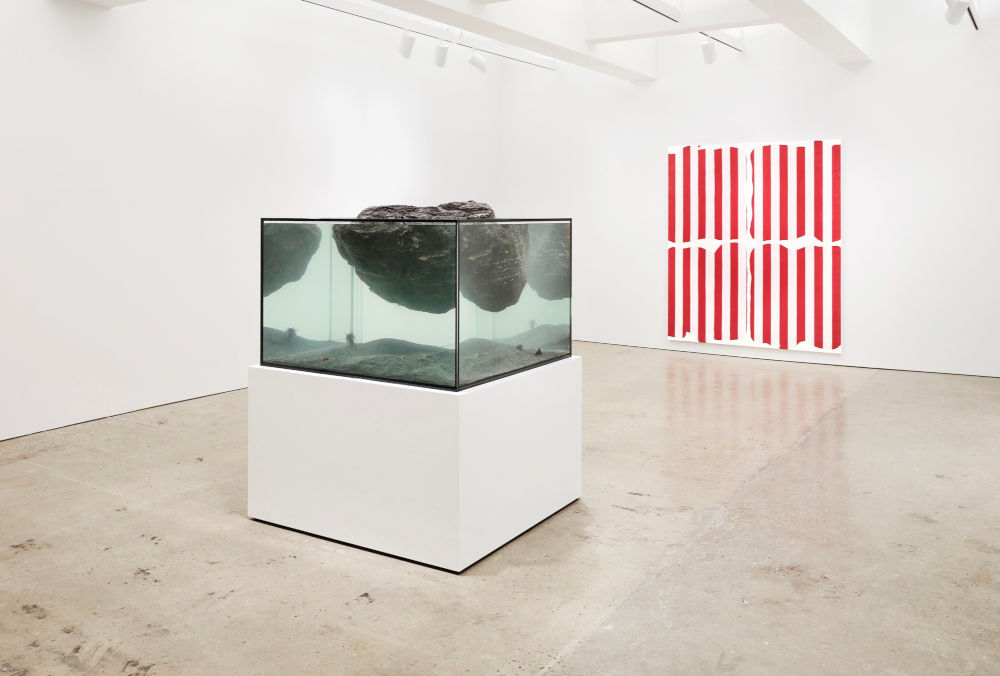 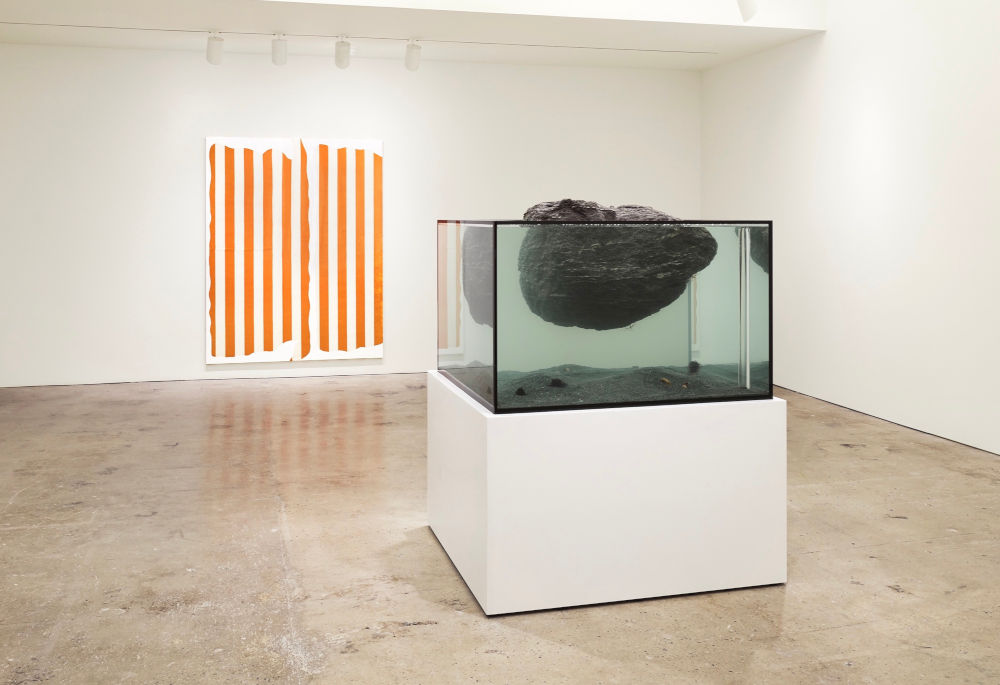 Presenting a selection of Buren’s vanguard striped paintings from 1966 in dialogue with one of Huyghe’s dynamic aquarium ecosystems from 2013, the show unites two bodies of works that dismantle the conventional relationship between authorship and presentation.

The inception of Daniel Buren’s pivotal, striped motif—which continues to form the foundation of his practice today—occurred in 1965 when he noticed the conventional, 8.7-centimeter-wide striped awning fabric lining the storefronts of a Parisian textile market. He adopted this unassuming, two-toned mass-produced fabric as the basis of his paintings, which he bestowed with matter-of-fact titles that list the medium, such as White acrylic paint on red and white canvas (1966), or describe the compositional form, such as Variable Forms Painting (1966). Although Buren left the majority of the striped support untouched, he deliberately distinguished his work from “ready-mades” by adding subtle painterly gestures (condensed to narrow, meandering lines across the support or isolated to its perimeter).

Defying traditional painted allusions of figuration and depth, these important early works mark the artist’s unparalleled use of stripes as a tool to direct attention from the artwork to its surrounding context. The series was created amid great political unrest and robust societal critique at a time when artists aimed to decry institutional power structures. Accordingly, by reducing the artist’s hand and employing systematic stripes, Buren unveiled the work as a neutral object whose value is assigned by the context in which it is placed.

Pierre Huyghe has examined the contextual implications of art exhibitions since the 1990s. His works often present themselves as situated networks, a continuity between a wide range of intelligent life forms (biological, technological) and matter that learn, modify and evolve. This exhibition centers on Cambrian Explosion (2013) from his aquarium series, which he began in 2010 and comprises live ecosystems that host aquatic plants and organisms. Radically eschewing traditional artistic media and ideas of authorship, these variable environments evolve independently of the artist’s control.

In the featured work, a 280-pound boulder is floating in water over crabs and anemones. The title refers to the sudden biological explosion over 500 million years ago that marked the emergence of almost all animal species. By referring to this moment of incredible volatility in the natural world, Cambrian Explosion suggests a sense of emergence and ephemerality, which is perpetuated by the artist’s use of autonomous living species as his medium. As if summoning the philosophies of Buren, who was an early mentor, Huyghe surrenders his work to contingency and different natures of intelligences: liberating artmaking from conventional institutional values.

Presenting Buren’s self-reflexive linear textiles and Huyghe’s evolving ecosystem, the exhibition provides a platform to extract a common thread between two very distinct artistic approaches. Whether renouncing painting for machine-made fabric or relinquishing sculpture to the impulses of nature, both artists create distance between themselves and their works, acting as catalysts rather than makers. The resulting works offer brilliant interrogations on the complex relationship between artist, artwork, context and viewer.

Daniel Buren (b. 1938, Paris) works and lives in situ. He has been the subject of major museum exhibitions worldwide and his work is included in prestigious international private and public collections. Buren has exhibited in the Venice Biennale more than 10 times and was awarded the Golden Lion in 1986. He participated in documenta 5, 6, and 7. In 2007, he received the Praemium Imperiale for Painting from Japan and was selected to exhibit at MONUMENTA 2012 at the Grand Palais in Paris.

Pierre Huyghe (b. 1962, Paris) lives and works in New York. His work is internationally known and has been presented in various exhibitions around the world. Huyghe has received a number of awards, including the Nasher Sculpture Prize (2017); Kurt Schwitters Prize (2015); Roswitha Haftmann Award (2013); the Smithsonian Museum’s Contemporary Artist Award (2010); the Hugo Boss Prize, Guggenheim Museum (2002); the Special Award from the Jury of the Venice Biennale (2001); and a DAAD in Berlin (1999–2000). Most recently, he was appointed Artistic Director of the Okayama Art Summit 2019.