Among the major themes that are presented in this exhibition, the cycles of life and history are explored in ways that audiences will be familiar with in my work. The exhibition has a new element entering the conversation though: paintings. These paintings, along with photographs, offer up images that evoke the passing of time.

Some moments from archival photographs are re-imagined and re-imaged as paintings, their sepia and yellowed vistas brought back into conversation – ironically – with the medium that photography seismically ‘replaced’ or at least in the minds of some made redundant, if only for a short time.

While the work shows scenes of a late-colonial period in which dramatic cultural change took place, it also accentuates the experience of looking and how photography affected a transformation in the way we could subsequently relate to the world through images. – Danie Mellor

Danie Mellor, from his studio in Bowral, NSW, talks about the works in The Sun Also Sets with Tyson Yunkaporta (Apalech Clan, Cape York), a Melbourne-based writer and senior lecturer in Indigenous Knowledges at Deakin University. 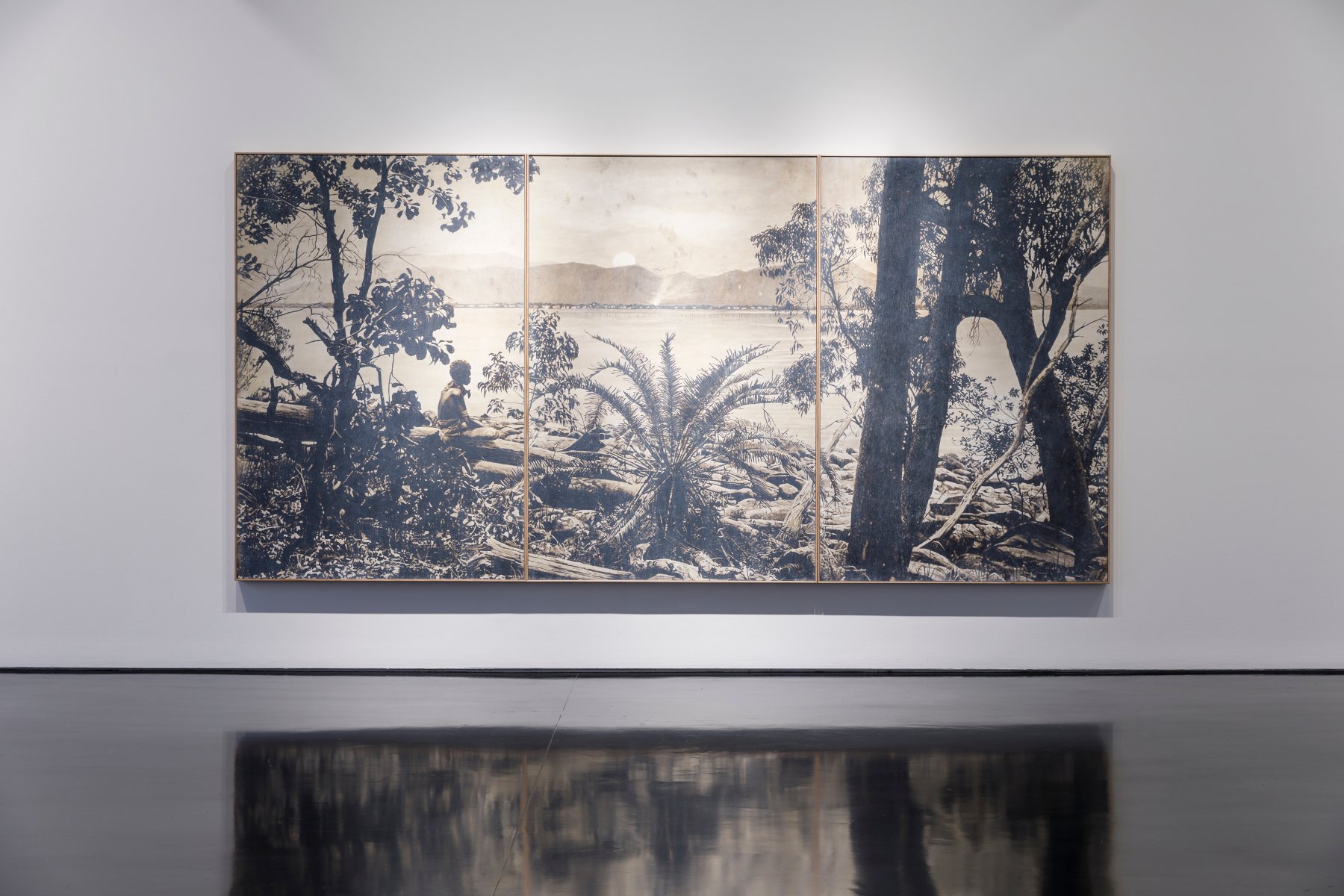 Danie Mellor
On the edge of darkness (the sun also sets), 2020
Acrylic with gesso and iridescent wash on board
Three panels, overall 181.5 x 371.5 cm, framed

An Aboriginal man sits cross-legged by a bay as the sun dips behind the horizon. Head slightly lowered, he is not gazing out across the water towards the developing township of Cairns or the Tablelands beyond, as the area appeared in the late nineteenth century. Rather, he seems lost in contemplation, foreboding or perhaps something worse. Lost to history. Rendered invisible. Extinguished.

Yet here he is, his profile resurrected before us in a bravura monochrome landscape, On the edge of darkness (the sun also sets), painted by Danie Mellor. It’s a view derived, in part, from the work of late colonial-era photographers such as Alfred Atkinson, who undertook field trips to document Aboriginal communities in the region while running a portrait studio in Cairns. A subject of his early portraits was Mellor’s great-great-grandmother Ellen. A Ngadjon woman from the Atherton Tablelands, Ellen was photographed over many years in his studio for her collection of formal carte de visite portraits, often with Danie’s great-grandmother May.

“There’s an important sense of remembering throughout my work,” says Mellor. “We’re part of a conversation with history, one often mediated by images. I have a strong connection to, and feeling for, photography from that period because our family archive goes back to 1908. These and other early images have shaped how I approach image-making, as a way of re-examining nostalgia and how that relates to the emotional ache of separation and distance.”

Recomposed in acrylic, oil and wash, the young man serves as a stand-in for the viewer, his head a counterpoint to the sun’s diminishing orb, his demeanour the affective focal point of a triptych that forms the centrepiece of Mellor’s new exhibition, The Sun Also Sets. Comprising sepia-tone paintings overlaid with iridescent wash as well as large-format photomontages, the series signals a new approach for the Mackay-born artist. – Tony Magnusson, excerpt from the exhibition essay. 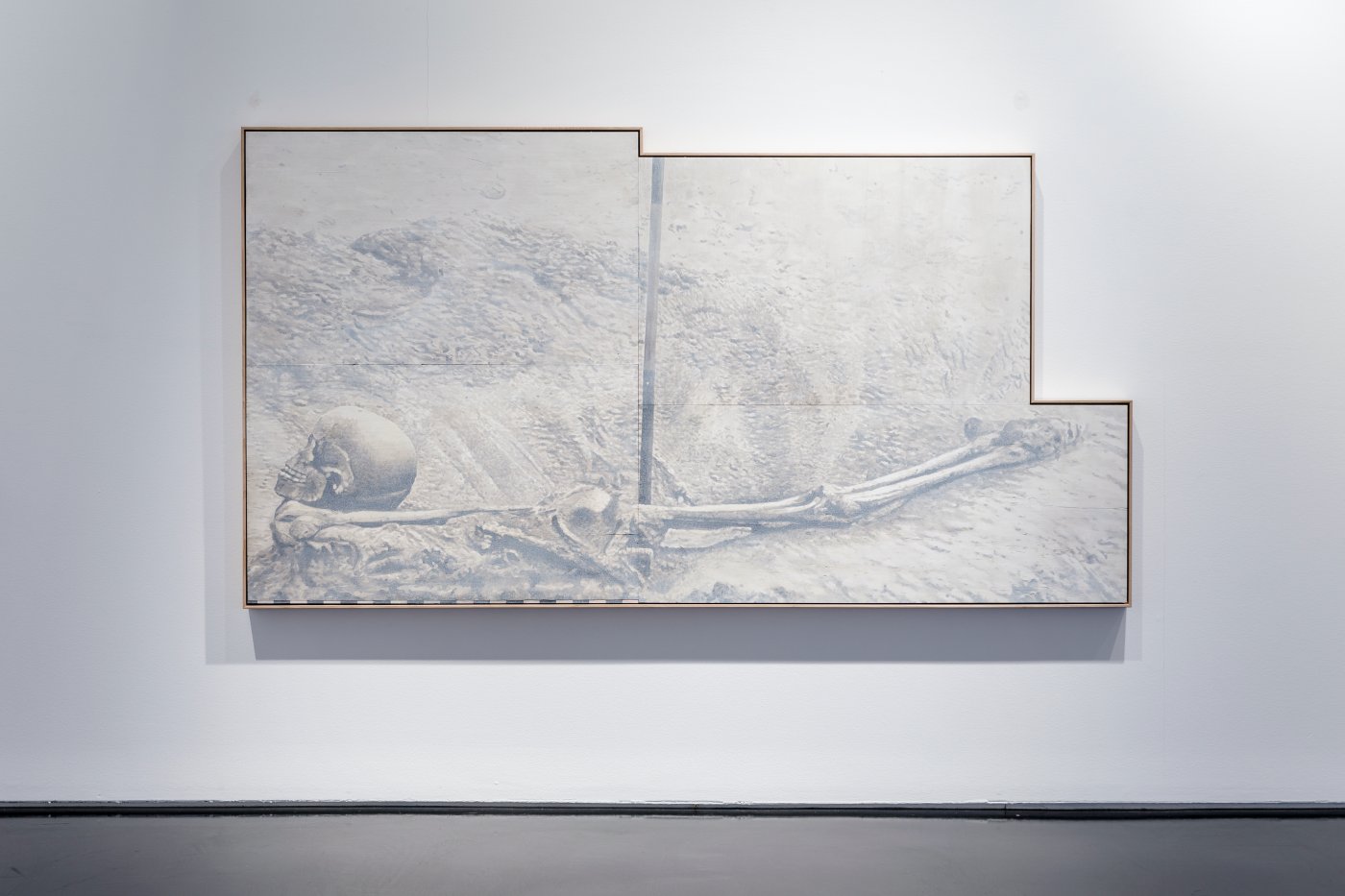 Danie Mellor
Bless me now with your sweet tears, 2020
Acrylic and oil on board with gesso and iridescent wash
Four panels, 116 x 216 cm (irregular) overall, framed

Bless me now with your sweet tears recalls a line from Dylan Thomas’ Do not go gentle into that good night. Somewhat uncomfortably, the excavation of history alluded to in this work points to the desecration which Aboriginal cultures and customs around the world have often been subjected. The sacrilege of exposure and clinical measurement suggested by the archaeological scaling bar speaks of just how contrasting cultural practices can be.

I am conscious that in picturing a subject such as this, it reminds us of a life once lived and serves as a potent memento mori, the painting and its unevenly assembled panels symbolic of historic displacement. In seeing and understanding intellectual and spiritual gaps between societies in a piece such as this, hope is offered for greater awareness through a shared vision of humanity. – Danie Mellor 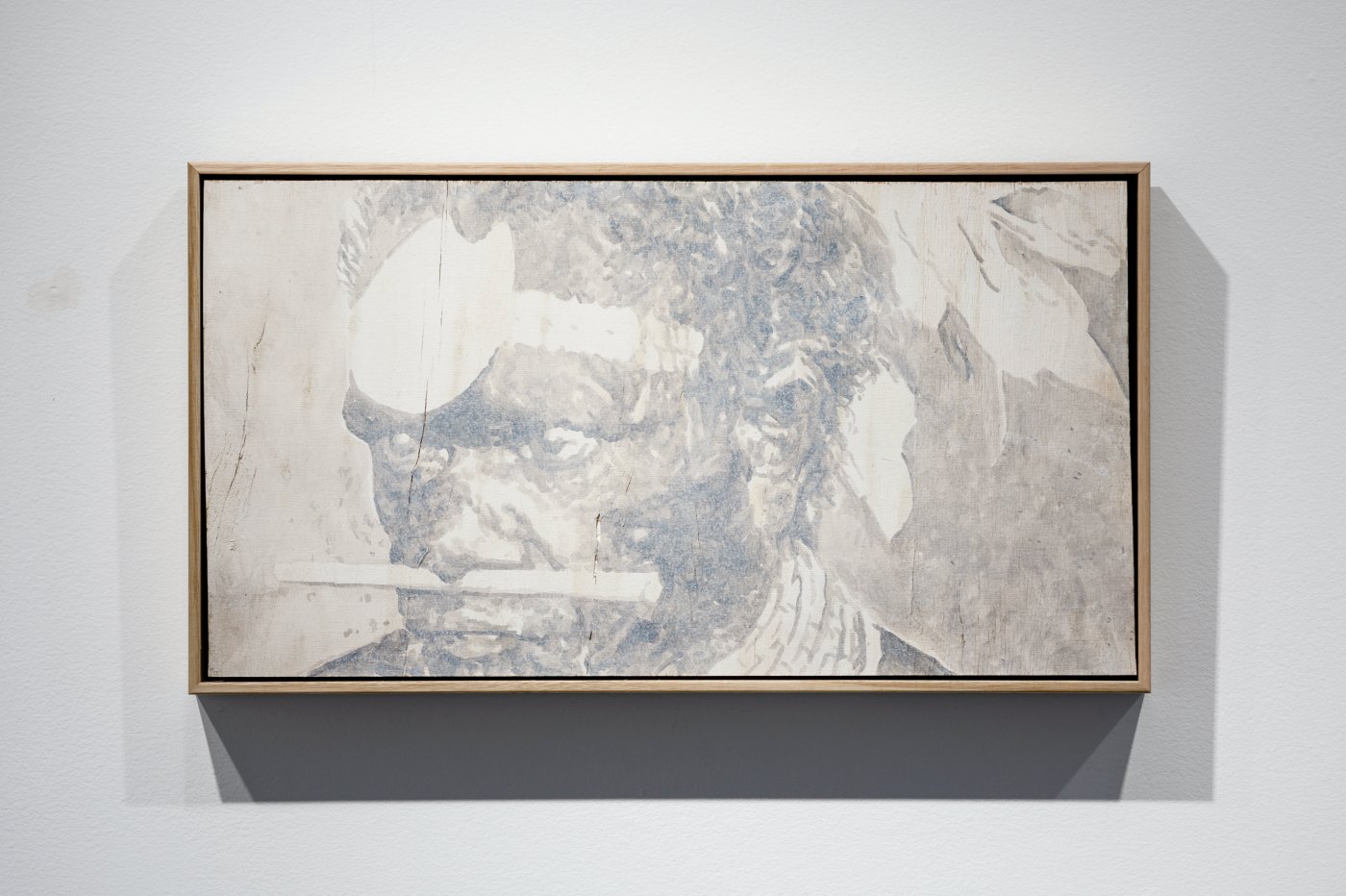 The defiant pose of the warrior in A question of being and his direct albeit obscured gaze, presents a moment frozen literally and figuratively in time. This warrior, decorated for ceremony, references images of a man who appears in photographs attributed to Walter Roth and shared with me by a rainforest elder.

The original intention of many photographs and images from this period was to record and preserve the memory of a people seen to be facing insurmountable social and cultural changes in the face of colonisation. Historic loss of access to traditional country in tandem with the erosion of language and in many cases familial ties, meant that life as people had known it was irrevocably changed. I have always envisaged this figure as a protagonist resisting this foregone conclusion and despite the evident theatre in his pose, asserting instead an unassailable presence and dominion in the landscape. – Danie Mellor 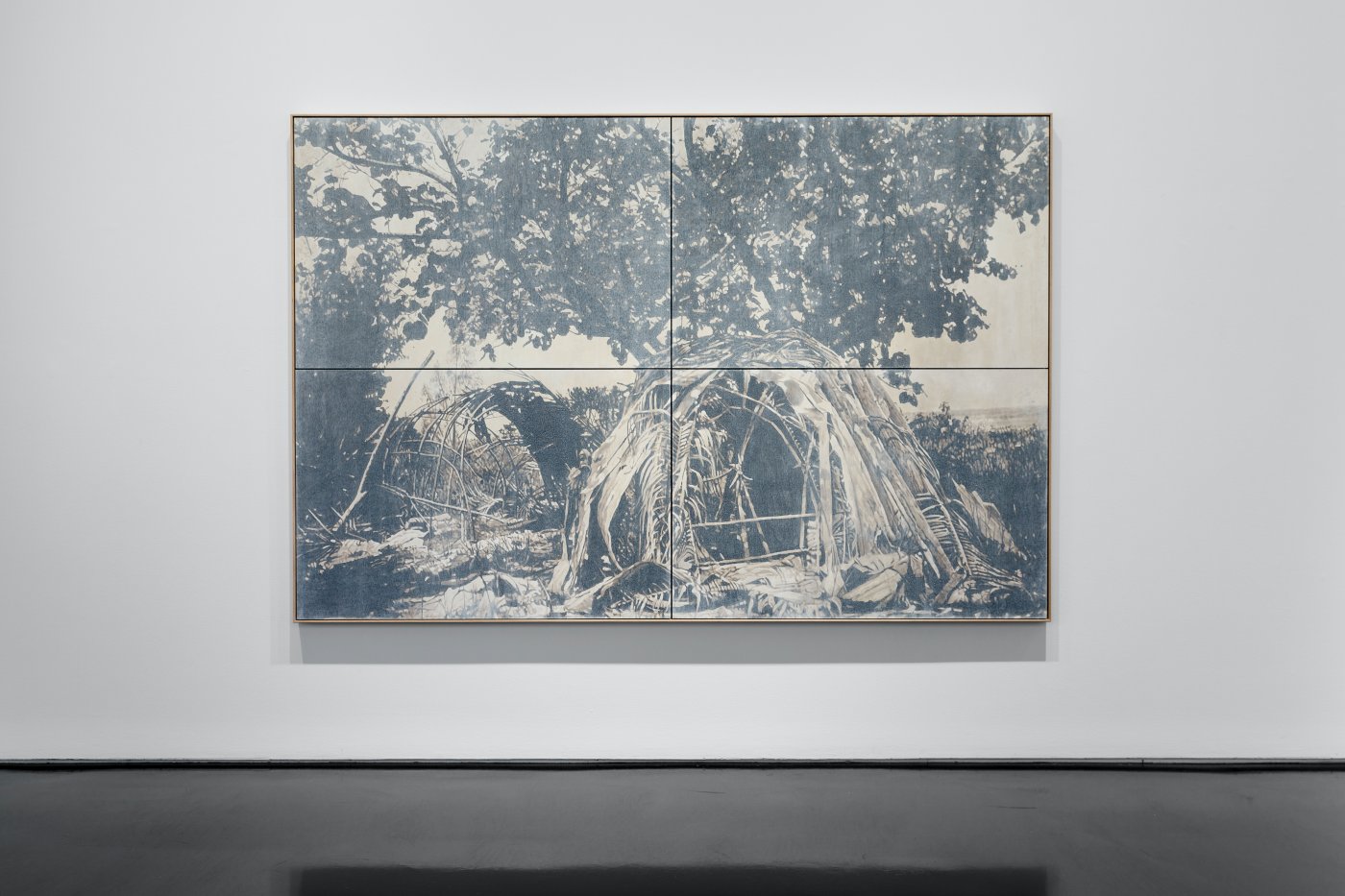 The end of certainty shows a cartography taking place in its picture plane, the panels revealing through their slight separation the beginnings of a grid that hints at a new way of seeing landscape through the device of mapping. – Danie Mellor

Increasingly, Danie Mellor is drawn to make work whose qualities accord with the reverence he feels for nature. In this way, the exhibition title nods to both Ernest Hemingway, who published The Sun Also Rises in 1926, and Ecclesiastes 1: 5–11, from which the American author borrowed his title.

“Hemingway and Ecclesiastes point to these enormous life cycles we’re part of, but which are almost beyond our intellect: ‘The sun also rises, and the sun goes down... there is nothing new under the sun.’ Aboriginal people lived in a relationship of balance and harmonious existence with nature for tens of thousands of years. The question I often ask is: ‘are we making ourselves alone in the world?’ ” – Tony Magnusson 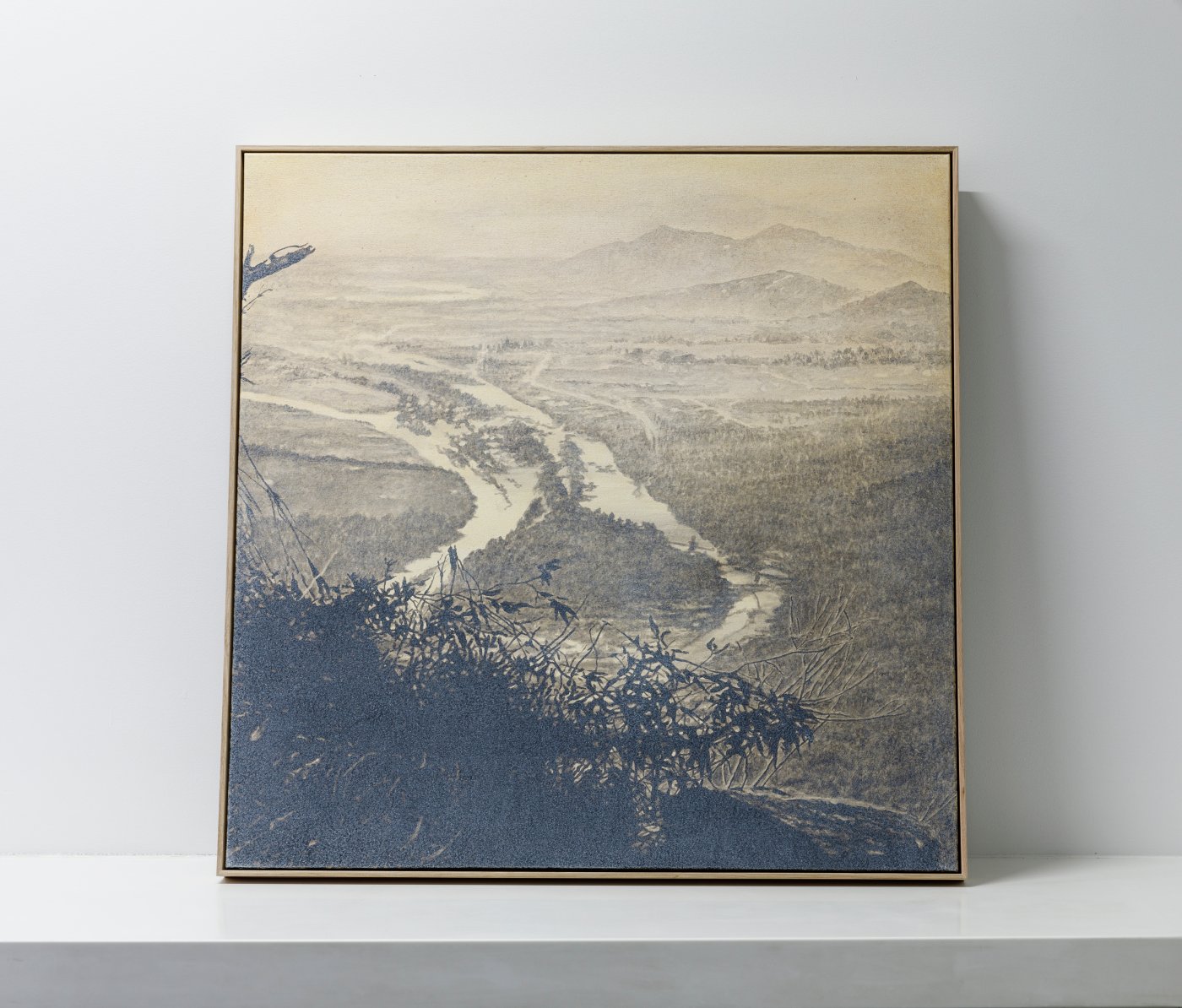 Danie Mellor
Against the dying of the light, 2020
Acrylic on linen with gesso and iridescent wash
93.5 x 93.5 cm, framed 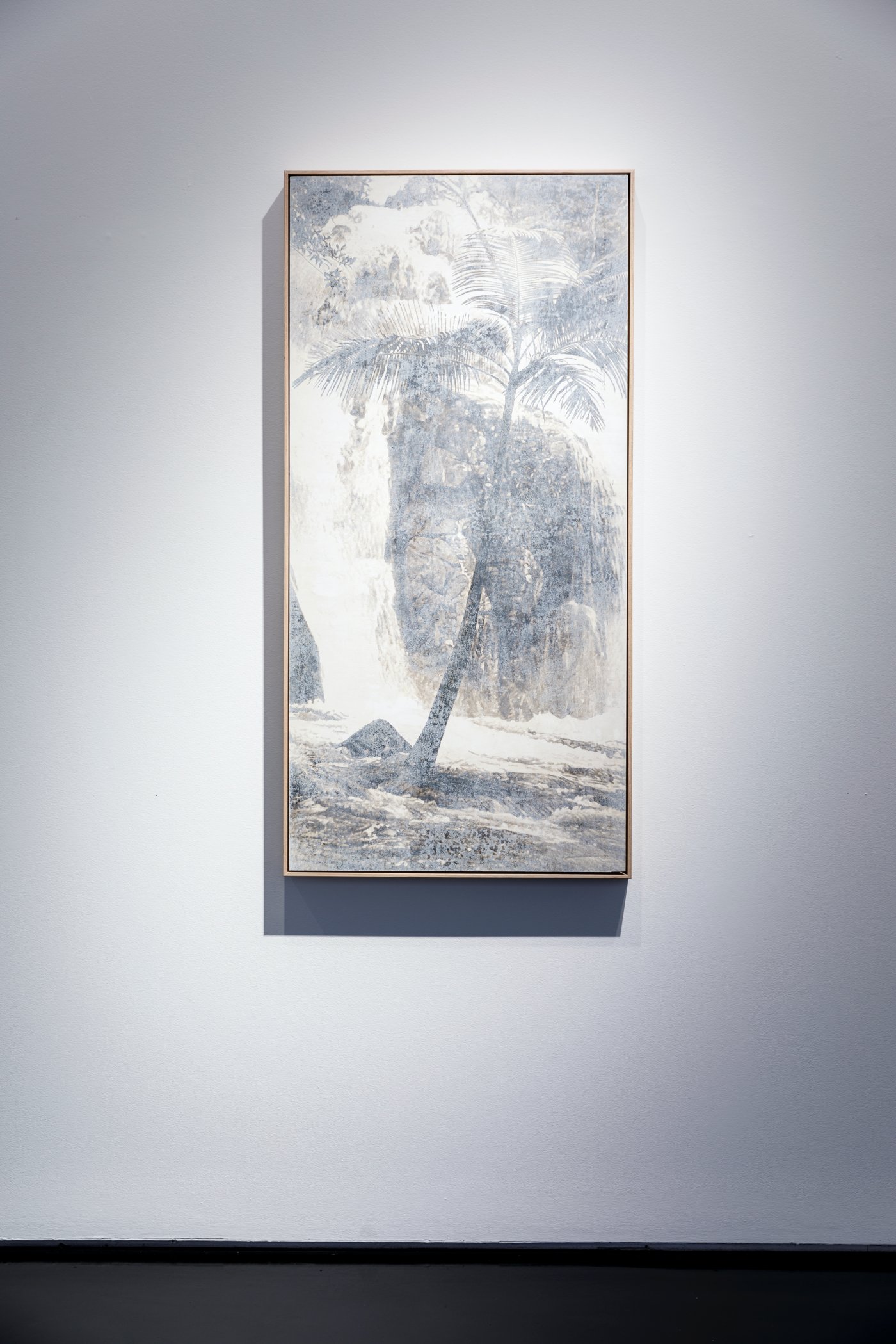 The painting titled The Photograph implies a deep-seated connection between the act of photographing and the act of re-presentation through painting. The source – an archival photograph – infers a relationship between photographer, artist and mediums in conversation despite the intervening century of years. – Danie Mellor 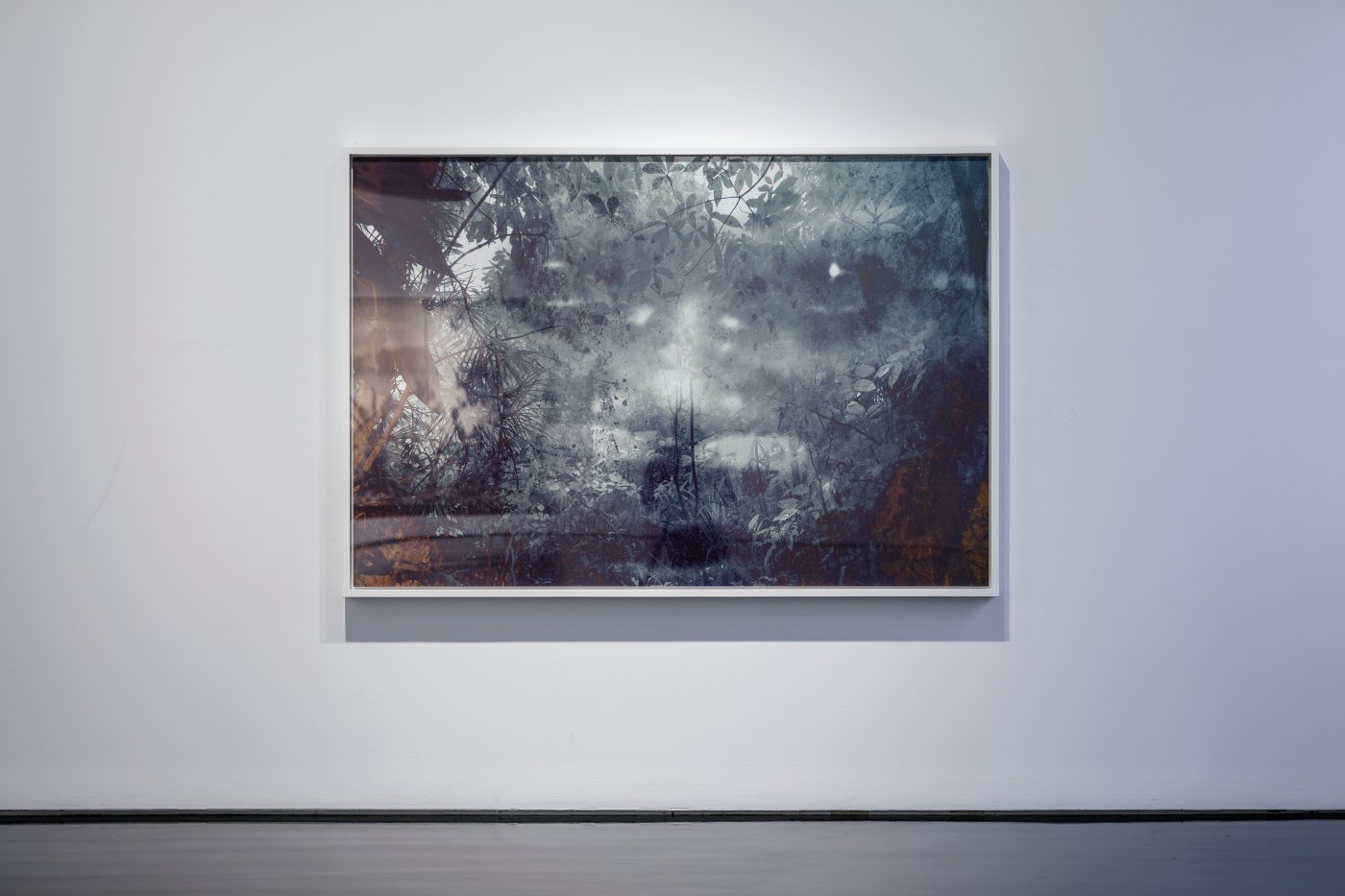 The relationship between paintings and photographs is important in The Sun Also Sets. Sontag commented in On Photography “the painter constructs, the photographer discloses.” In this body of work, I am doing both but have awareness through the experience of research and creating that construction and disclosure are less separated than Sontag suggests.

The combination of recent and archival imagery collapses time and shows the rainforest as an Indigenous landspace. It is a place saturated with human presence and story, blending art histories with a deeply felt connection to the landscapes of the area from which my family came. – Danie Mellor In two works, Stories of place and A world of ideas, a spectral face displays the looping string patterns of cat’s cradle between mouth and hand like the manifestation of a silenced language.

“Walter Roth was the first Northern Protector of Aborigines, and he wrote about our family in his dispatches to Brisbane’s parliament,” says Mellor. “As an anthropologist, he made drawings and took photos of Aboriginal people engaged in string games like cat’s cradle, which was a way of sharing Dreaming stories.” – Tony Magnusson 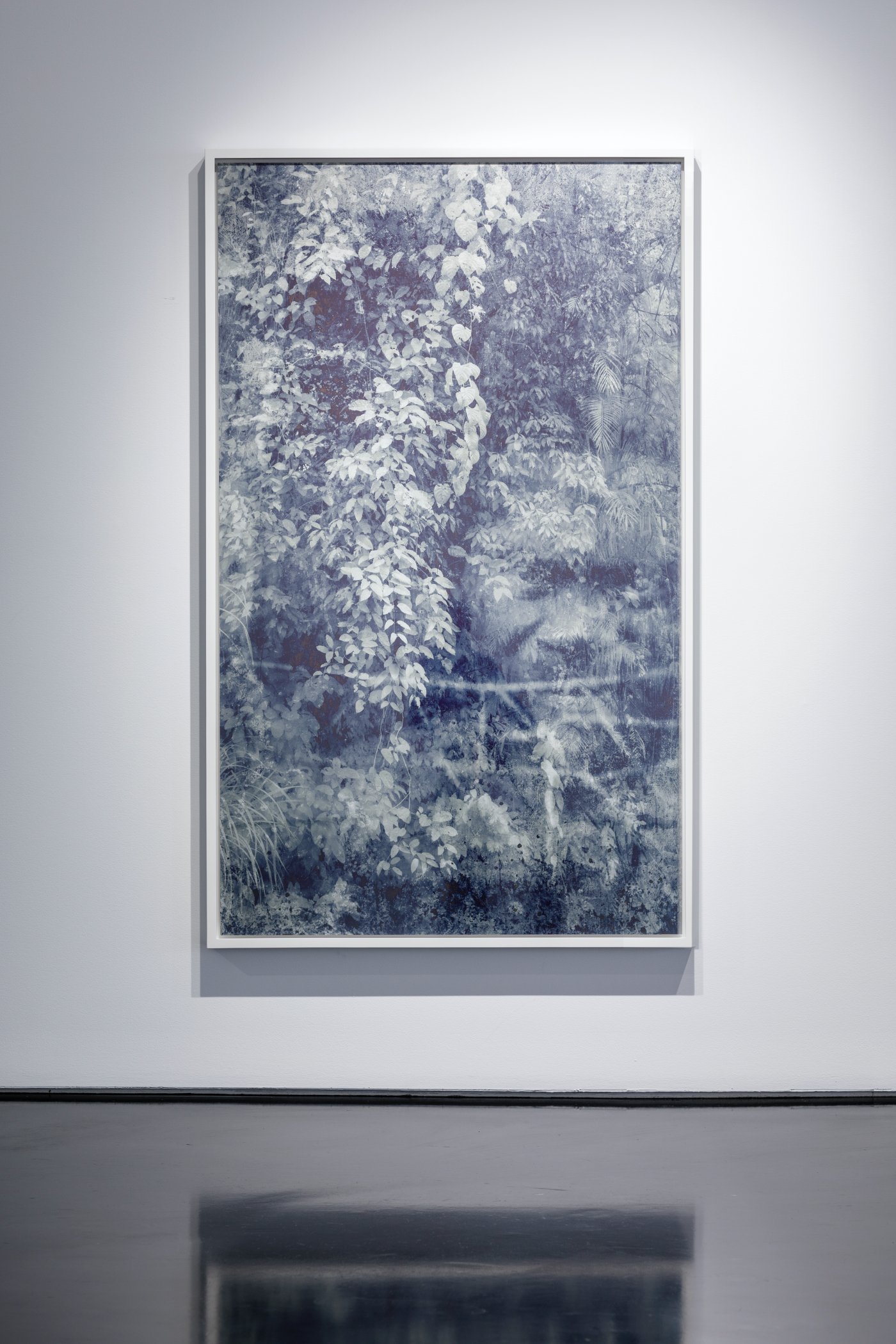 The woven form of the twine and its pattern suggests a spider web-like diagram of creation on a grand scale, a Dreaming space and even subtle association with string theory. This ‘theory of everything’ suggests all of reality being held interdependently together as part of a holistic framework, which simultaneously echoes and affirms a structural awareness inherent to indigenous knowledge systems.

The relationship between the surrounding ecological space, shown with the spectra of infra-red and ghostly images of the central figure attributed to the photographer Atkinson, emphasises an empowered and sustained connection to environment and place through all of time. – Danie Mellor 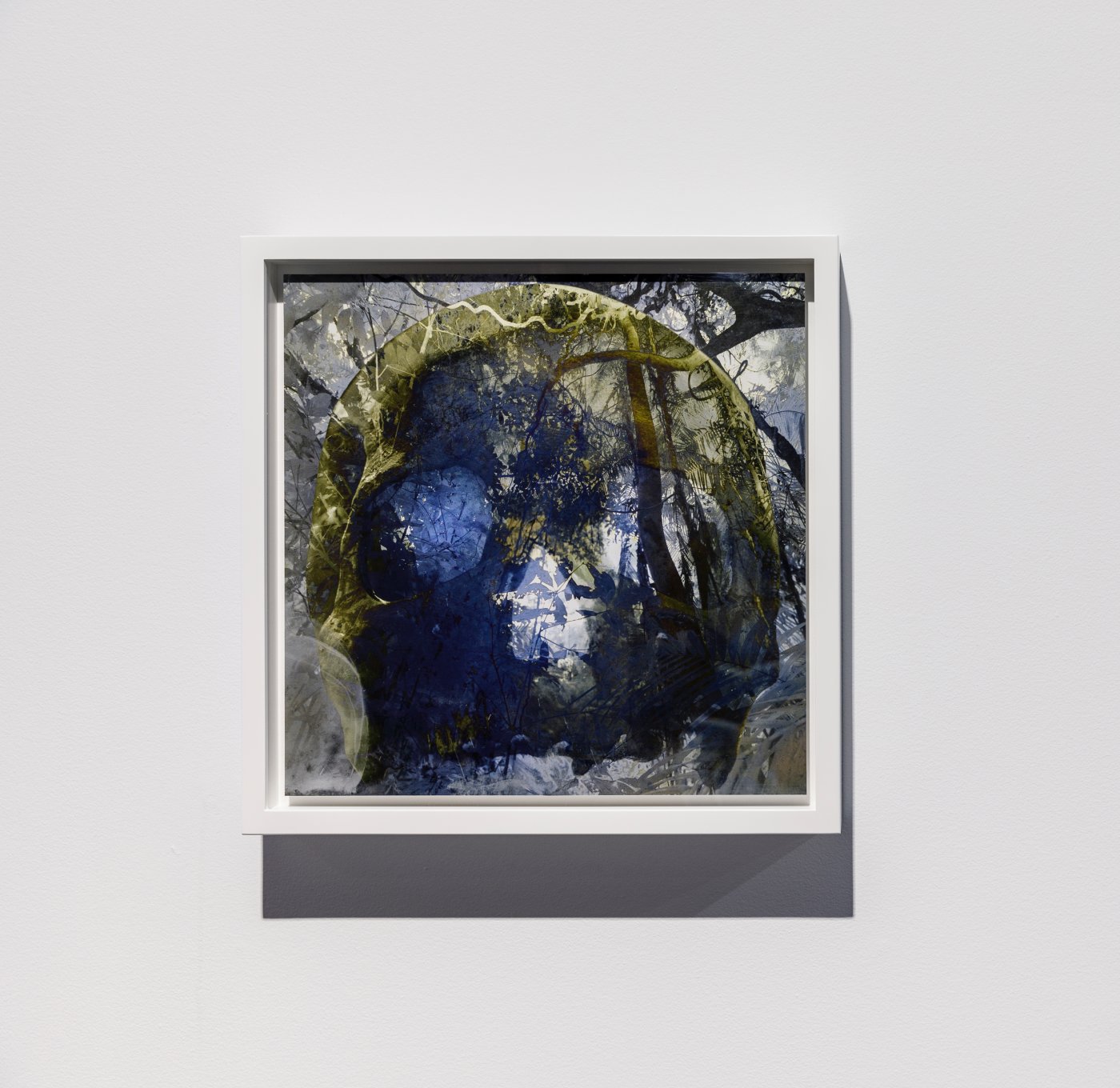 Photo-based works combine archival imagery with Mellor’s own photos taken while trekking through rainforest in and around the Tablelands.

In The dreams near Topaz, we see the monumental edifice of a human skull, its hollows akin to entry points in a network of caves, superimposed on a skywards-looking forest scene. “That’s bushland near Topaz,” explains Mellor. “It’s pretty dense national park around there, an area where Ngadjon and Mamu country meets.” – Tony Magnusson

Danie Mellor explores the intersection of contemporary and historic culture. In considering Australia’s recent and ancient past, his work traverses the breadth of those narratives in relation to global art histories.

Mellor’s revaluation of iconic landscape traditions is informed by his connection to place through Aboriginal heritage and ongoing preoccupation with Australia’s landspace.

His works are held in the collections of state and regional galleries in Australia, and international museums including the National Gallery of Canada, The British Museum and the National Museum of Scotland.

This project has been assisted by the Australian Government through the Australia Council, its arts funding and advisory body.