Danie Mellor: The Landspace: [all the debils are here]

Danie Mellor: The Landspace: [all the debils are here]


Danie Mellor presents his first solo exhibition at Tolarno Galleries entitled The Landspace: [all the debils are here]. 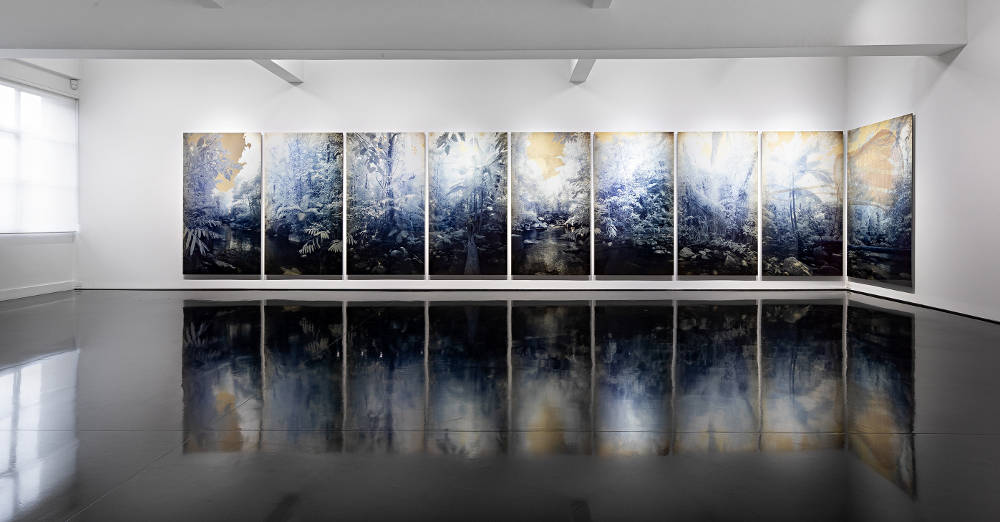 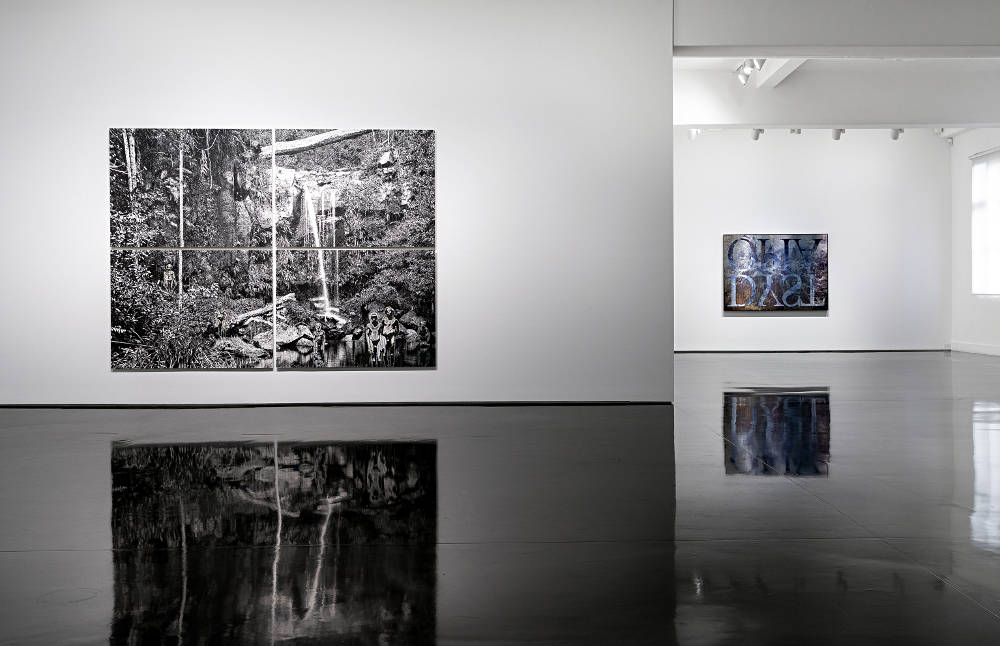 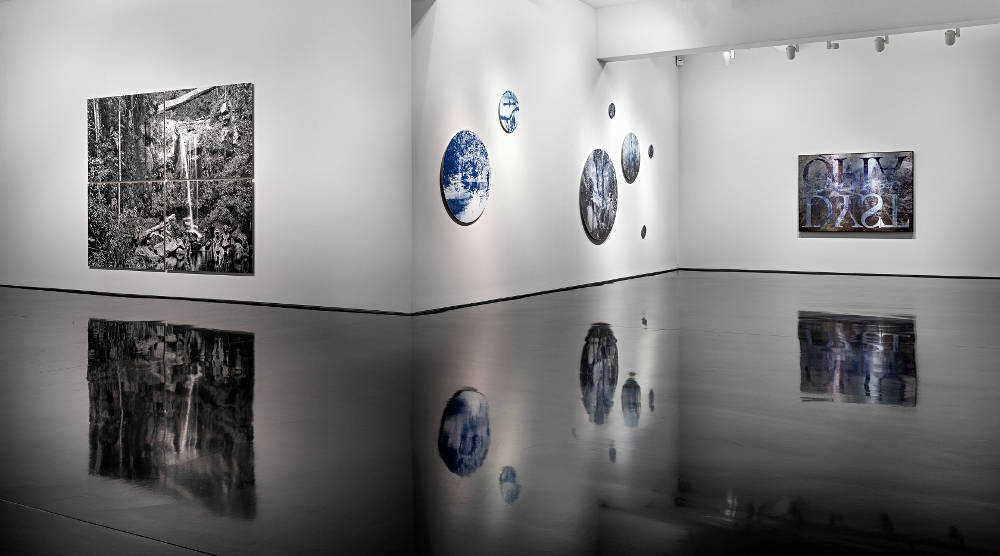 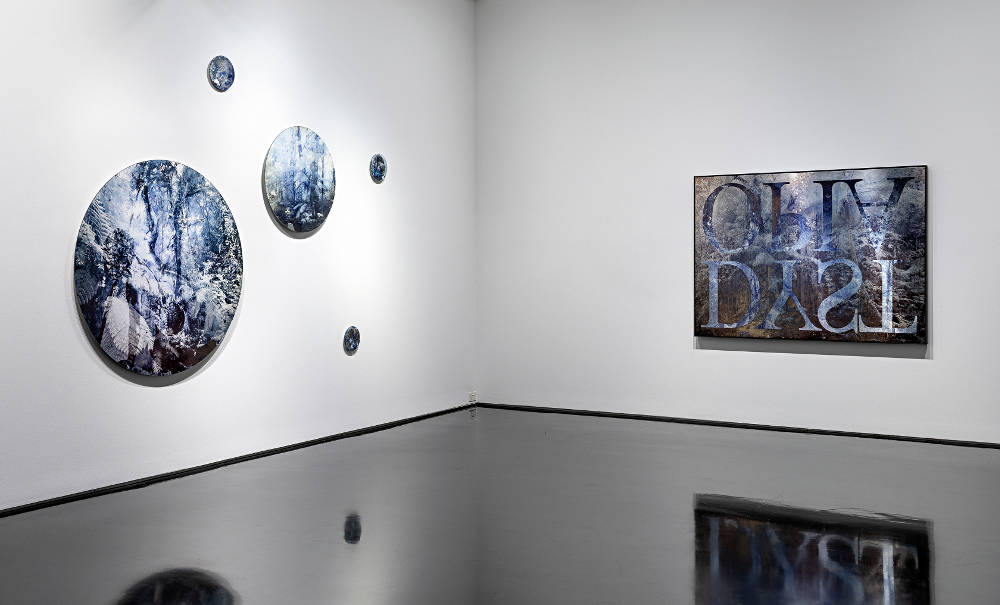 Born in Mackay, Queensland, Danie Mellor’s maternal Aboriginal family are descendants of Mamu and Ngadjon peoples whose country is in the Atherton Tablelands of tropical far north Queensland. His father’s family emigrated from California to Australia in the early 1900s. Mellor’s significant body of work exploring Australia’s heritage through a very personal lens, has been recognised by major public museums.

In this new sequence of works, Mellor reimagines the landscape as the landspace, and in doing so opens up a new way of seeing history, ownership and possession of country.

“Reimagining the world as a landspace suggests we are in an enveloping environment, a world that has its past, present and future – its dreaming and landstory – unfolding as prescient and concurrent phenomena,” Mellor says.

The centrepiece of the exhibition is Landstory, a monumental nine-panel photographic work. The blueprint for this piece is Sidney Nolan’s nine-panel work Riverbend from 1964, which explored his preoccupation with landscape, mythology and history. On permanent display at the Australian National University, Mellor studied this piece over many years as a student and then lecturer, at the then Canberra School of Art. Nolan’s Riverbend emphasises the importance of a critical and ongoing evaluation of history, the inherent possibilities of image making, and contemporary revisions of the past that reshape cultural perception.

Mellor’s Landstory subtly combines his own recent photography of rainforest country – using an infrared photographic technique to reveal a light spectrum unseen by the human eye – with archival imagery from the same area, including that of late-colonial photographer Alfred Atkinson, active in the Cairns region of northern Queensland.

“Light embedded in archival imagery has travelled from the past, and now meets the light that is part of photographs I have taken in the present,” Mellor says.

Landstory suggests something beyond ordinary experience, evoking an ancestral presence. The work creates a collapse in time – merging multiple strands of history, past and present – bringing to the surface the continuing presence of Aboriginal people, of a timeless landstory.

“In Australia, the experience of the landspace is often seen through the prism of colonialism and the tragic consequences for Indigenous people and culture,” Mellor says. “The enduring presence and strength of that culture and people over tens of millennia however, is just as significant in our country’s landstory. The space of country is now shared, but imbued with the presence of Aboriginal people, with ancestors and ghosts, our debils.”

Alfred Atkinson photographed multiple generations of Mellor’s Aboriginal family in his studio from around 1908, including his great grandmother, whom Mellor knew throughout his childhood and early adult life. A unique connection to the past. Atkinson received recognition as a sensitive portrait photographer, but he was also known for his postcard images of Aboriginal people in the environment of the rainforest.

“By incorporating historical imagery as part of a broader response to the theme of the work, I retrace not just the tracks and traces of early photographs, but reinstate people within the context of a landspace that is Aboriginal. The nature of the work also brings the reflection of viewers in to the space of each picture, and makes us an active part of the composition.”

In 2013, Professor Marcia Langton curated Debil Debil at Carriageworks in Sydney, a group exhibition that included Mellor’s major nine panel work Bayi Minyjirral recalling funerary ceremonies of rainforest people. Mellor’s new exhibition evolves ideas explored in Langton’s show, as well as appropriating a key line from Shakespeare’s The Tempest: “Hell is empty, and all the devils are here.” In Mellor’s The Landspace [all the debils are here] the borrowed passage subverts and then realigns its cultural implications – we know this is not Hell, although it may have seemed it to early colonists, and it is not empty, as it was so declared.

The ancestors, our debils, are always here.