Karavan inscribes in landscape human signs, that is, those of both reason and sacredness.
Georges Duby

The gallery presents an exhibition of the artist DANI KARAVAN entitled ADAMA, “Earth” in Hebrew, a new tribute to the Israeli artist whose work has been exhibited and supported by the gallery since the exhibition Questions d’urbanité in the 80s, in which the gallery presented, alongside Jean-Pierre Raynaud’s and Gérard Singer’s works, his very first Plastilin model and drawings of his Axe Majeur. 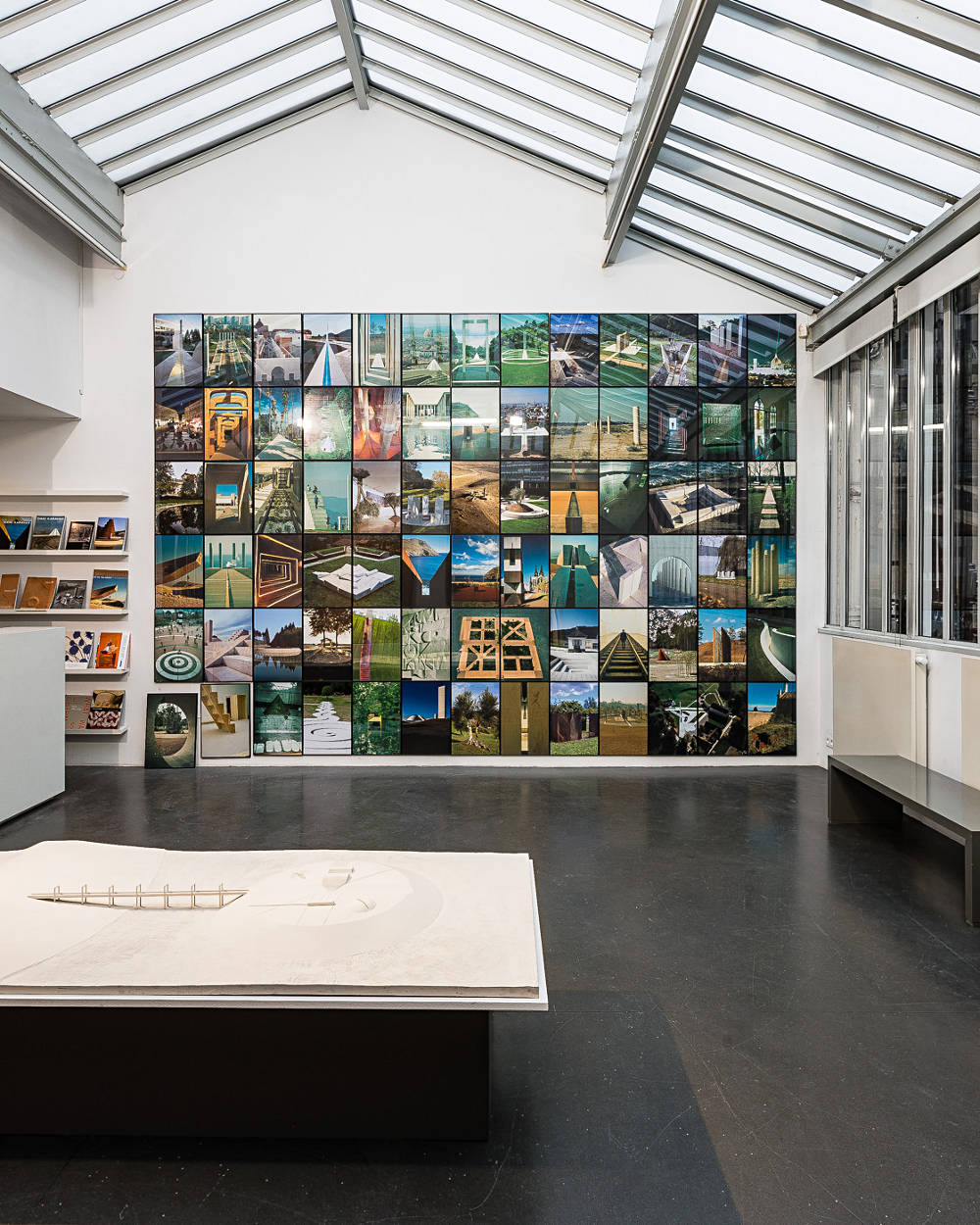 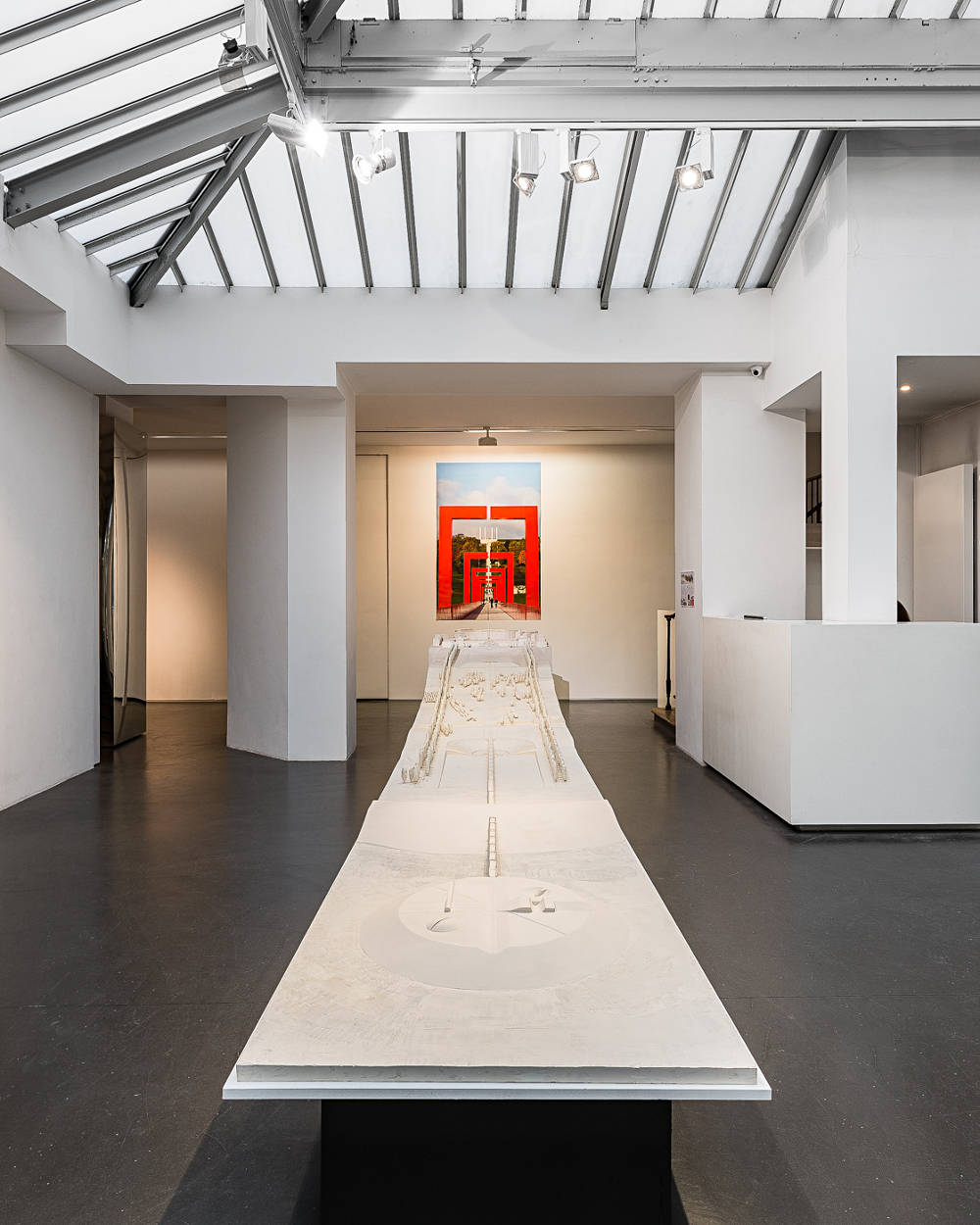 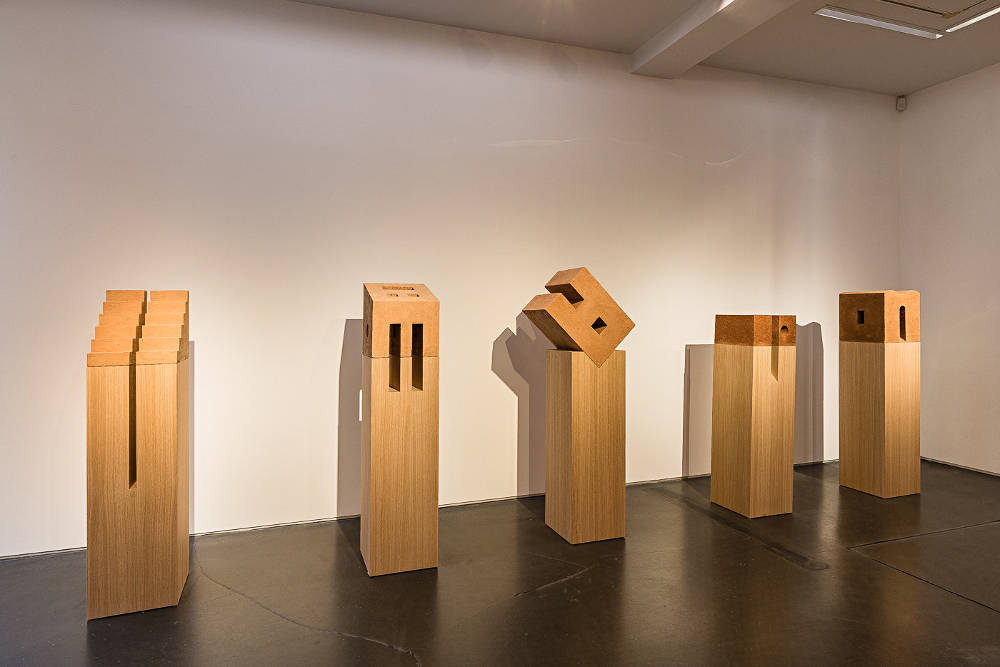 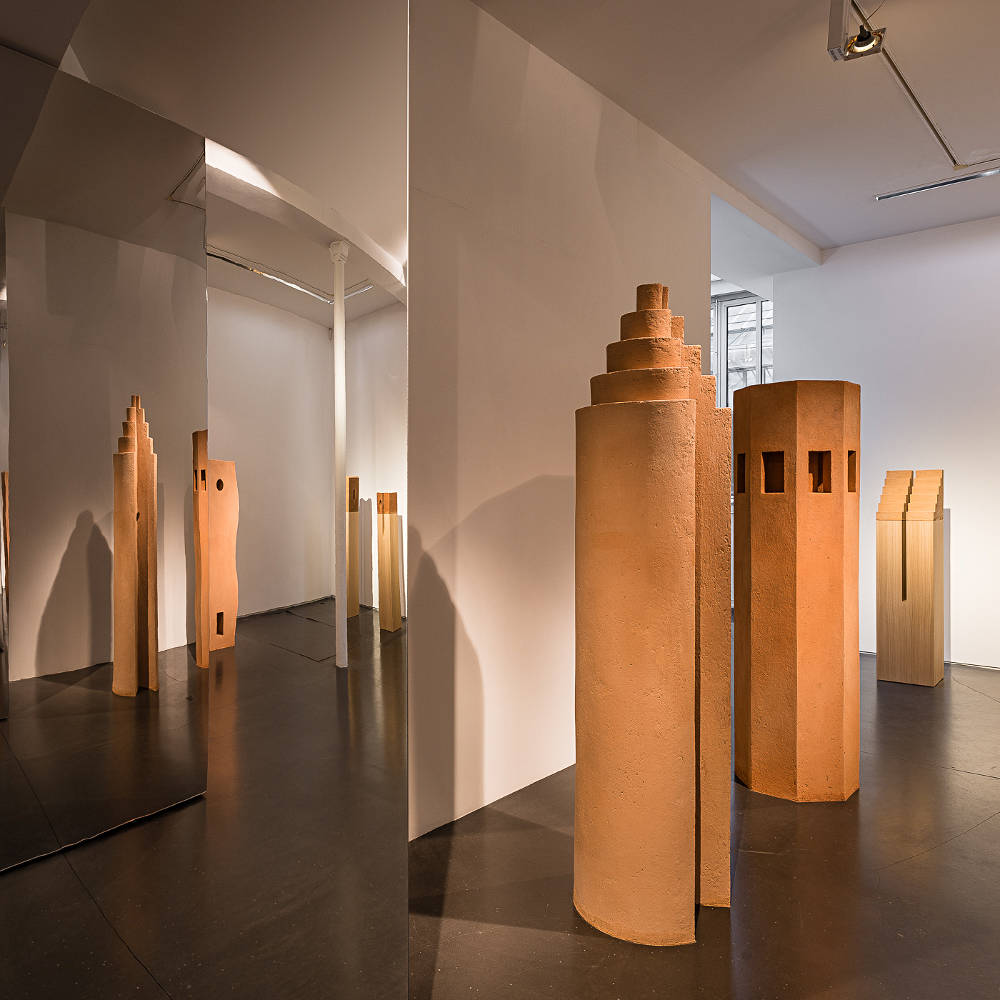 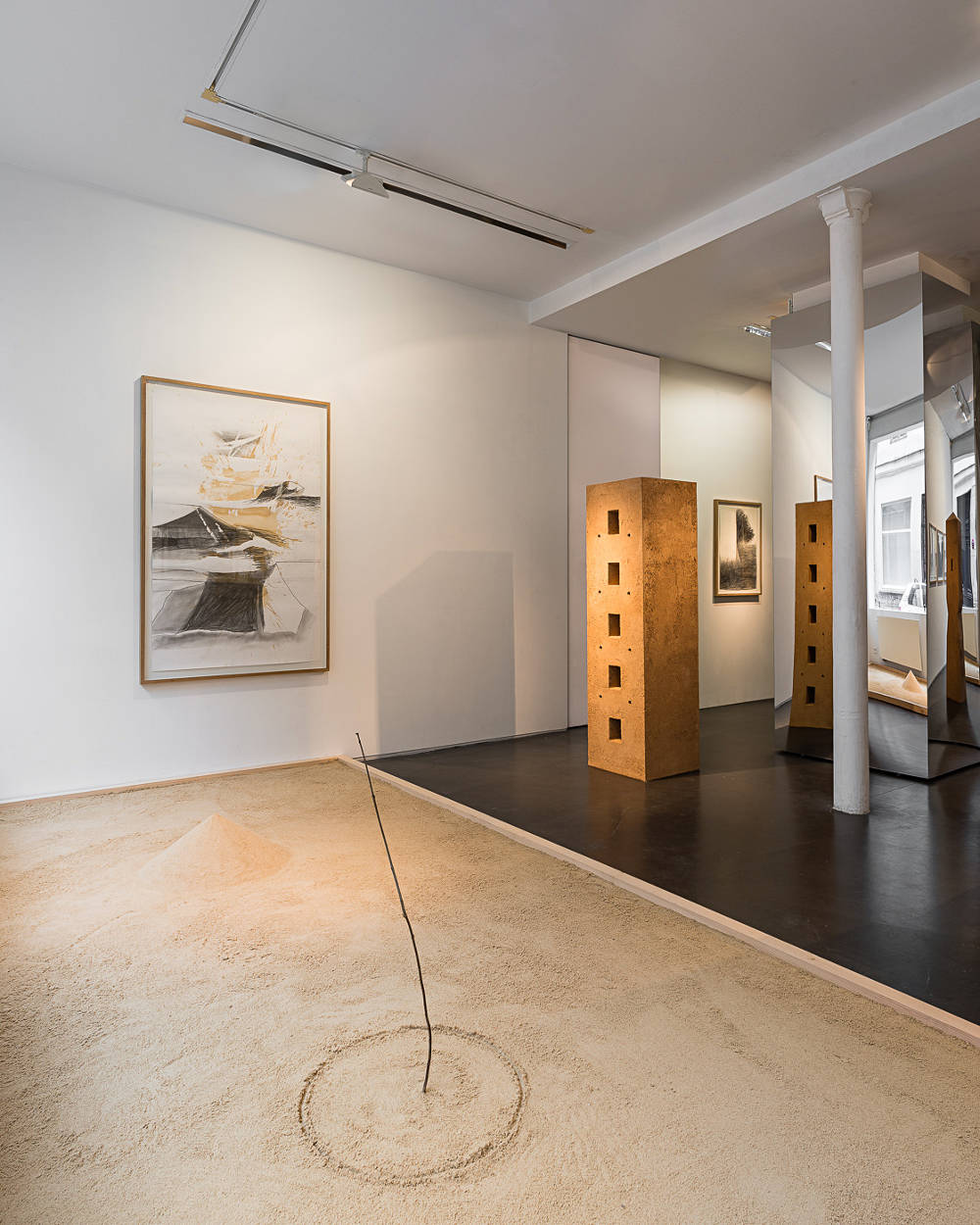 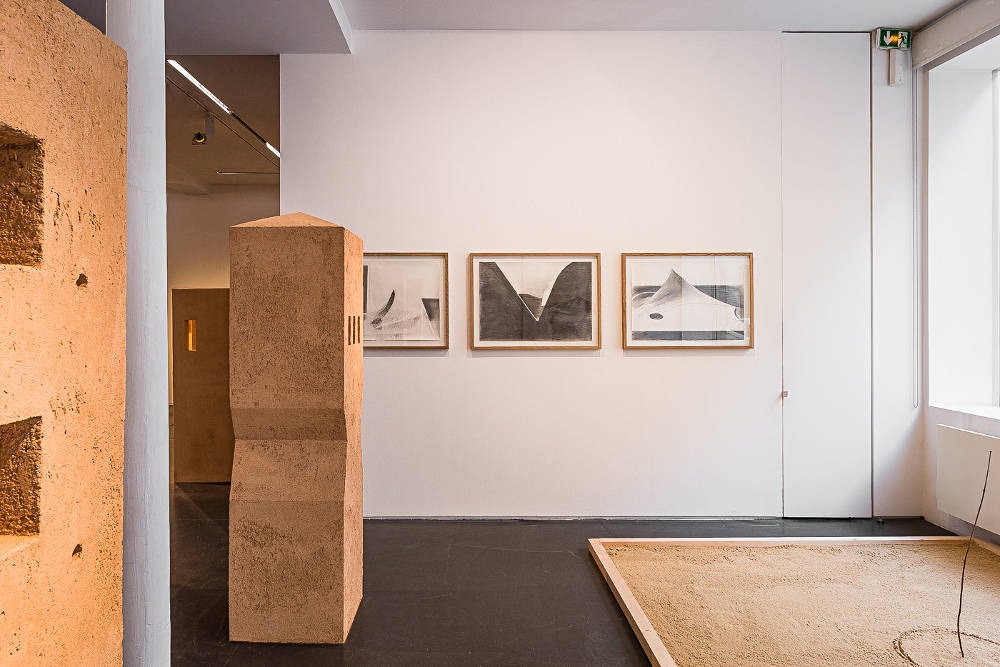 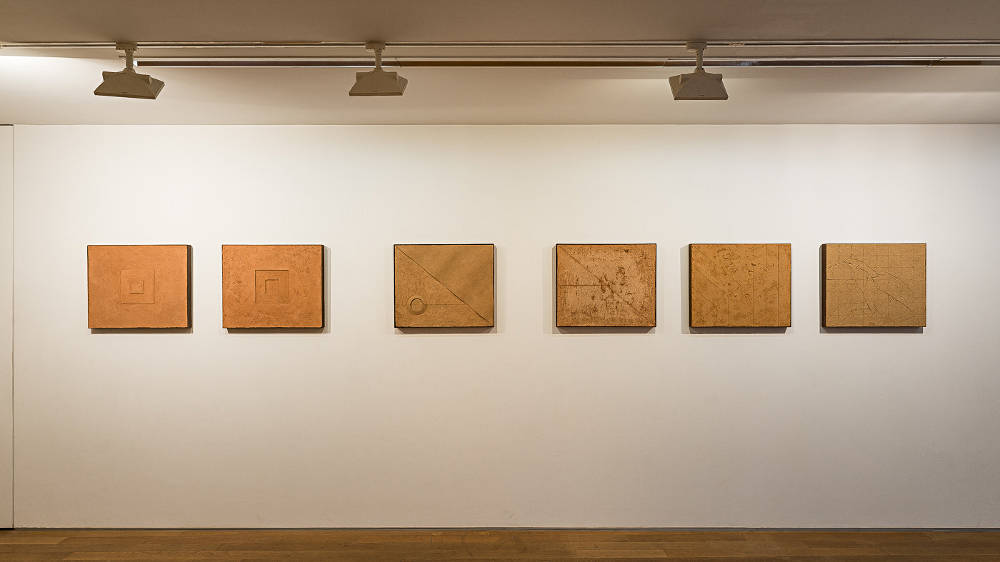 A 3km-long urban and environmental sculpture, on the cusp of sculpture, landscape, urbanism, and architecture, the Axe Majeur was conceived to link the new city of Cergy-Pontoise to one of the most beautiful landscapes of Ile-de-France, in the central axis of Paris and its landmark areas of La Défense, the Arc de Triomphe and the Pyramide of the Louvre. Axe Majeur consists of 12 stations — a highly symbolical number — 11 of which are completed today.

In order to attract audiences’ attention to this major work, infused with space and time, developed in sustainable form since 1980 and still ongoing in 2018, the gallery chose to present an 8-meter-long model, so as to share the entire span of the artist’s vision, his capacity to offer a landscape imbued with memory that also functions as a line of perspective. In addition to this major work, a wall of photos will present the artist’s innumerable creations throughout the world, realized in parallel with the construction of the Axe Majeur.

Fifty years after the creation of his first environmental sculpture entitled Neguev Monument (1963-1968), set in the middle of the Israeli desert, the gallery exhibits all of Karavan’s latest sculptures, small and large, as well as his mud-brick bas-reliefs. These earth sculptures are reminiscent of the earthen villages of his childhood, whose constructions were conceived as inhabitable sculptures since the rooms and the furniture were entirely made of earth, as were some vestiges of Canaanite and Isrealite constructions dating from 1500 to 3000 years ago. Thanks to the innovating earth sculpture technique in the bas-reliefs and sculptures, realized with the help of the artisan Rachid Mizrahi and the artist’s model maker Anne Tamisier, Dani Karavan was able to give birth to these works, conjuring earthen architectures common to several cultures and the universality that links these cultures together. Some of these works were on temporary loan to the Musée d’Art moderne of Céret in 2015, but now they are being presented in their entirety at the gallery, which has supported the whole of their conception and production for the past three decades. Speaking about these earth-architectures of human scale, the artist made these comments: “Fifty years after the Neguev Monument I felt the need to come back to works of smaller dimensions, to chamber music as it were. I started with the right material. In fact, for me, all materials are appropriate, and I have used many throughout my artistic life. But I wanted to discover new ones and this is when a new path opened for me: working with earth. I was thrilled by the idea.” Constantly working with simple and universal shapes, in the lineage of the spatial sculptures of the great 20th century sculptors such as Brancusi, Nogushi, and Giacometti, Dani Karavan has always retained his fundamentally childlike, innocent, and pacifist nature, as he describes it himself: “I was born on the Mediterranean shore, I have walked in dunes, along olive trees, mountains and valleys that survived all these horrible wars. Memory has become part of my own being, and if memory is forgotten, one loses direction, and path.” According to Germain Viatte, who has taken part in all the contemporary art adventures in France for half a century and has always shown a very strong interest in museums of civilization, these new works seem like “a sort of great ‘primer of his world-description,’ a way to outdo oneself that the artist has constantly refined and specified while applying it to very diverse geographical and historical situations.” Most cultures have erected — since prehistory — anthropomorphous poles, totems incarnating animal spirits and invoking the dead, votive steles of conquests and power, cairn along undifferentiated spaces, so as to create a dialogue with winds and to measure up to time, the course of the sun and the stars; they always come to establish, close to sacred and living spaces, humanity’s assurance, its capacity to dialogue with the powers of nature. The vertical stele shows the ascending desire to escape from gravity and to place humans on an equal footing with trees and mountains, between earth and sky.”

This set of sculptures, like steles, oscillating between ochre and pink hues, with a smooth surface or gritty insides, are similar to houses, like the traditional houses or historical villages that have been unearthed thanks to the many archeological excavations in Israel and Palestine, in Cyprus, in Africa and in Morocco, where the techniques of mud-brick were so advanced. As Germain Viatte describes them in his text Steles and Reliefs, “these constructions speak to us clearly while remaining secretive. Always simple, of elementary appearance, their shape can be elaborate like Metuman (Octogone), or the double sinusoids of Knisa (Entry), or even the narrow cask of Shovach (Dovecot). What matters is always their growing impetus, those of Aliya (Ascension), of Tfila (Prayer), of the five stacked openings of Halonot (Windows) or that of Haritz (Slit), arrow sharp; and finally the openings signifying the astral oculus, the multiple view, the access, the crossing, the aim, the direct penetration or the oblique one like in Mabat (View). They have the rhythmical familiarity of a human processional cortege. They manifest true being. Their titles illuminate the intention without really giving it away; rather, they suggest, and keep, for us, the esoteric aspect of their formulation in Hebrew.” Dani Karavan’s bas-reliefs are the writing of landscapes, the murmur of water, the undulations of sand dunes, the structures of prehistoric tents, habitats of early men; their titles are enlightening: Ha’acher (The Other), Vayachaloku (Sharing), Meshulashim (Triangles), Sefer Patuach (Open Book) or apparently contradictory equivalences Shakua and Bolet (Negative and Positive). For all these works Dani Karavan has chosen the material of unifying earth, able to transmit a universal message of peace. They can thus complete and give roots to his works from the 50s, in which Karavan liked to paint villages close to his childhood kibbutz.

Karavan always works on each site very specifically; each detail of the gallery exhibition has been conceived by the artist, such as the mirror/pillars that send back, through their many reflections, the earth’s structures and the multiplicity of framings and images.