Galerie Kogan Amaro, Zürich presents the double exhibition Dangerous Beauty – Nazareth Pacheco and Frans Krajcberg. Curated by Ricardo Resende, the show brings together iconic works of the artists, creations that seduce by the beauty of matter, and ways of expressing harsh realities. 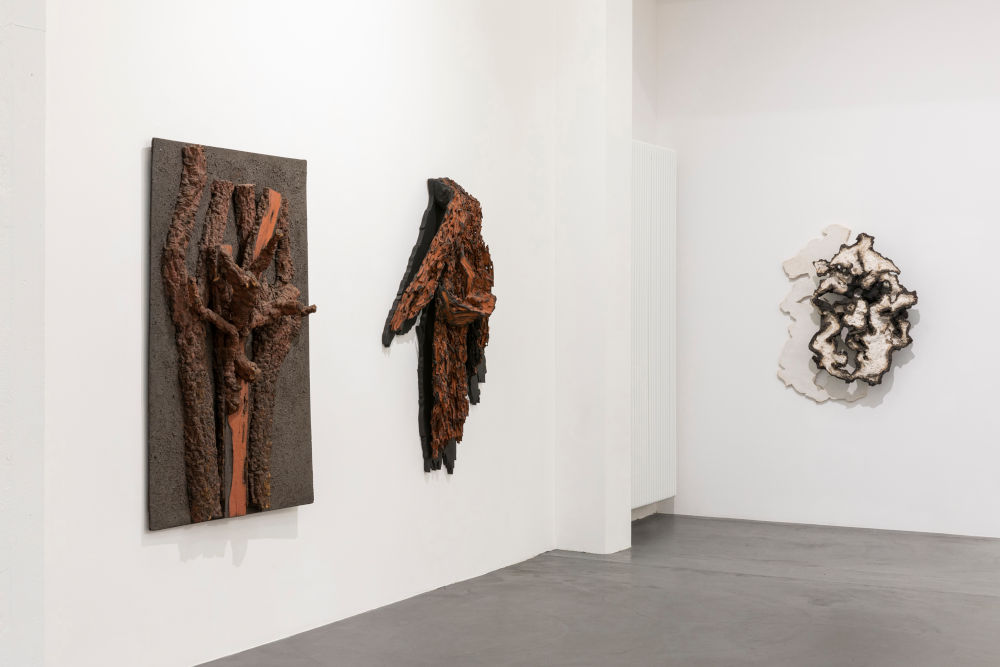 “Beauty will save the world. The phrase by Russian writer Fiódor Dostoievski has never been so current, because it is precisely when so much is going wrong around us that we need to speak of the planet’s beauty, and the humanity that inhabits it. The statement by Bulgarian philosopher Tzvetan Todorov expresses the core of the exhibition Dangerous Beauty: “The Essence of Forestry and Humanity in the Works by Nazareth Pacheco and Frans Krajcberg”.

Nazareth Pacheco is an exponent of a generation of Brazilian artists that emerged between the 1980s and 1990s, at a time when the country walked towards fiery guidelines related to women. Pacheco took her feminine condition and her biography to her benefit, particularly narratives related to her body, and employed them as raw material for her three-dimensional works. Her art is about life transformed into beautiful, apparently body-adorned objects made of plastic, such as blades, needles and hooks, in addition to blood and crystals – to cut and dilacerate the memory of the body “pictured” while physically absent.

Frans Krajcberg (1921 – 2017) found in Brazil what he needed, after losing his entire family to World War II. He arrived in the country in 1948 and set his household in the city of Rio de Janeiro. His is the love for forests, nature was his main source of inspiration, which he explored through chromatic shapes and aspects in natural pigments, sculptures and engravings. Like an activist who screams out for plants and animals, Frans displays to the world the exuberance of his work made of logs, bark, flowers and leaves, revealing his intimacy with the soul of forests and woods.

Both artists share the way they deal with daring and dangerous questions that seduce by the beauty of raw materials, and the way of expressing harsh realities. “The beauty in Pacheco’s and Krajcberg’s works is the expression of dramatic themes without plunging or slipping into tragedy and ugliness,” explains the curator. “On the contrary, they are not addressing the simplistic and naive beauty in the semantic sense of the word, commonly associated with the very idea of a beautiful sunset”, he adds.

Nazareth Pacheco graduated in Fine Arts at Mackenzie Presbyterian University in the city of Sao Paulo, Brazil. Since 1983, she has been developing 3-D works in connection with processes experienced by the body. Feminine, historical, literal or symbolic. The pieces surrounding the body are transmuted into objects and installations, whose beauty and brilliance are often disguised as pain and grief. She attended Sao Paulo’s 18th Biennial monitoring course under the guidance of historian and art critic Tadeu Chiarelli, in 1985. In Paris, she attended the sculpture workshop at École Nationale Supérieure des Beaux-Arts, in 1987. In 1998, Nazareth attended the 24th São Paulo’s International Biennial. In 2002, she mastered at the School of Communications and Arts of the University of São Paulo (ECA/USP) with the dissertation of “Seductive Objects”, under Carlos Fajardo’s guidance. Over the last few years, she has participated in several conferences in Brazil and abroad, having attended Louise Bourgeois’ Salon in New York, between the years of 1999 and 2006. Nazareth has been having her work exhibited for three decades at several art galleries and museums in Brazil and overseas, both individually and collectively.

Frans Krajcberg (Kozienice, Poland, 1921 – Brazil, Rio de Janeiro, 2017) found in Brazil what he needed after losing his entire family to World War II. He arrived in 1948, initially residing in the southern state of Paraná, next, he left for Rio de Janeiro. Prior to his arrival in Brazil, he studied engineering and carpentry in the former Soviet Union city of Leningrad, and arts in Stuttgart, Germany. In 1951, he participated in the 1st International Biennial of São Paulo and, in 1957, became a Brazilian naturalized citizen. He also participated in the XXXII Venice Biennale, where he was granted the City of Venice Award in 1964. Nature is his true inspiration. Krajcberg experienced important periods throughout his life: in Europe, from 1958 to 1964, and in Brazil’s Minas Gerais state, from 1964 to 1972. Both periods brought him even closer to nature, exploring chromatic shapes and aspects through natural pigments. He lived in the southern region of Brazil’s Bahia state, on a ranch named Sitio Natura (Nature Ranch) in the municipality of Nova Viçosa, where he remained until the end of his days. This phase led his work into rather sculptural means, in which biodiversity became his source of inspiration. He is widely renowned not just for his sculptures, but also for his drawings, prints and photographs.

Courtesy of the artists and Kogan Amaro