Petzel presents Hello Trouble, a joint exhibition of works by Dana Hoey and Caitlin Cherry, addressing the subject of the great American West. 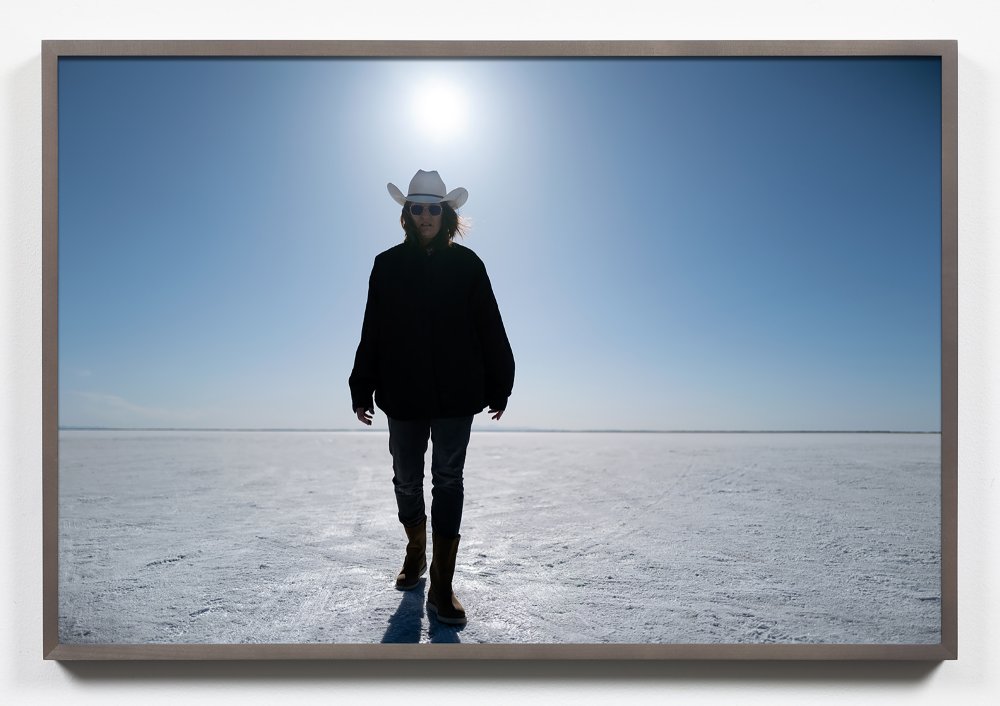 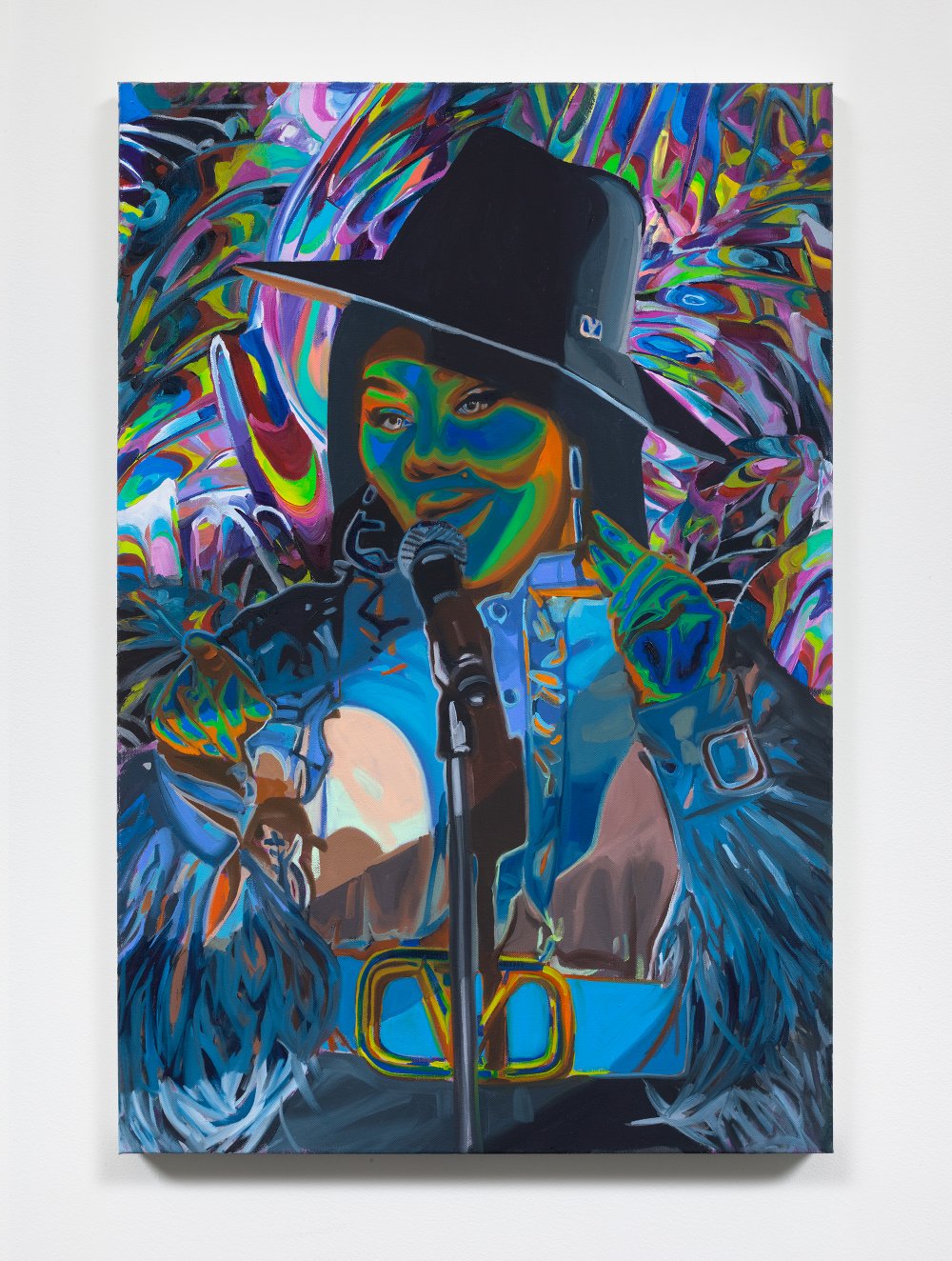 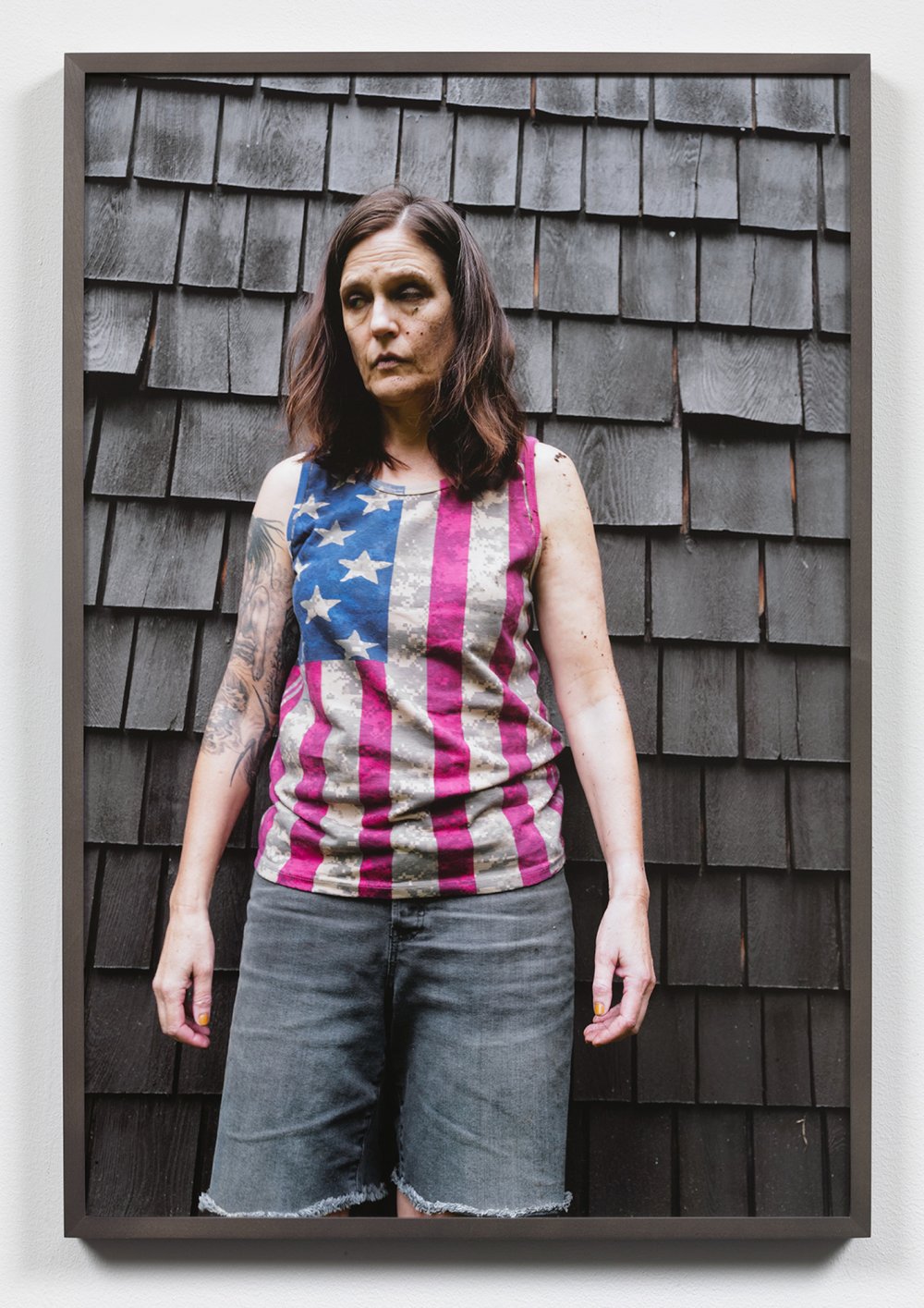 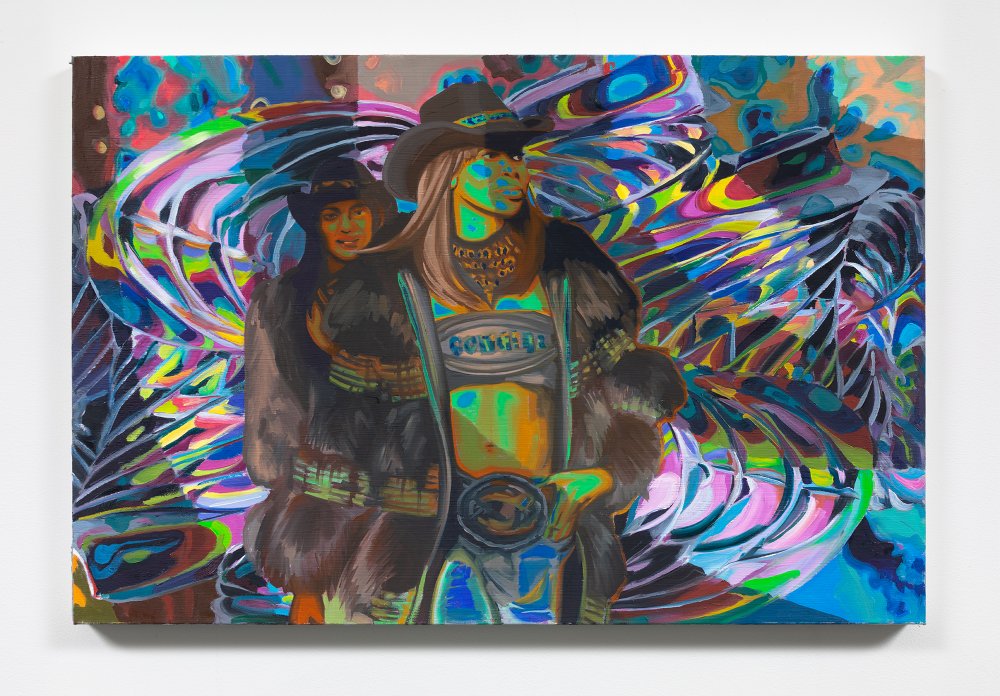 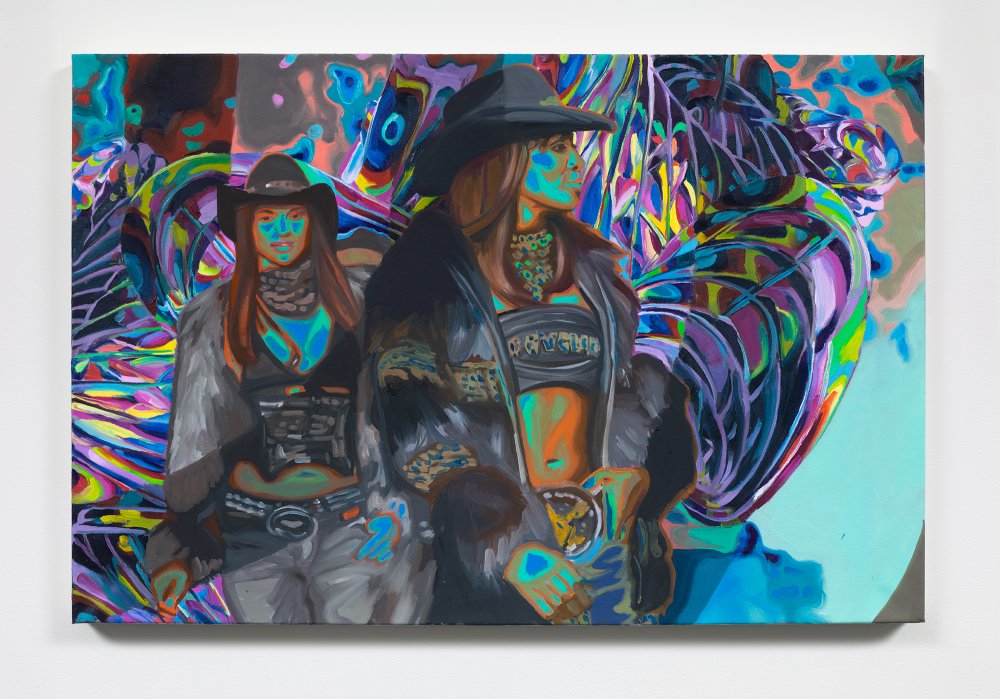 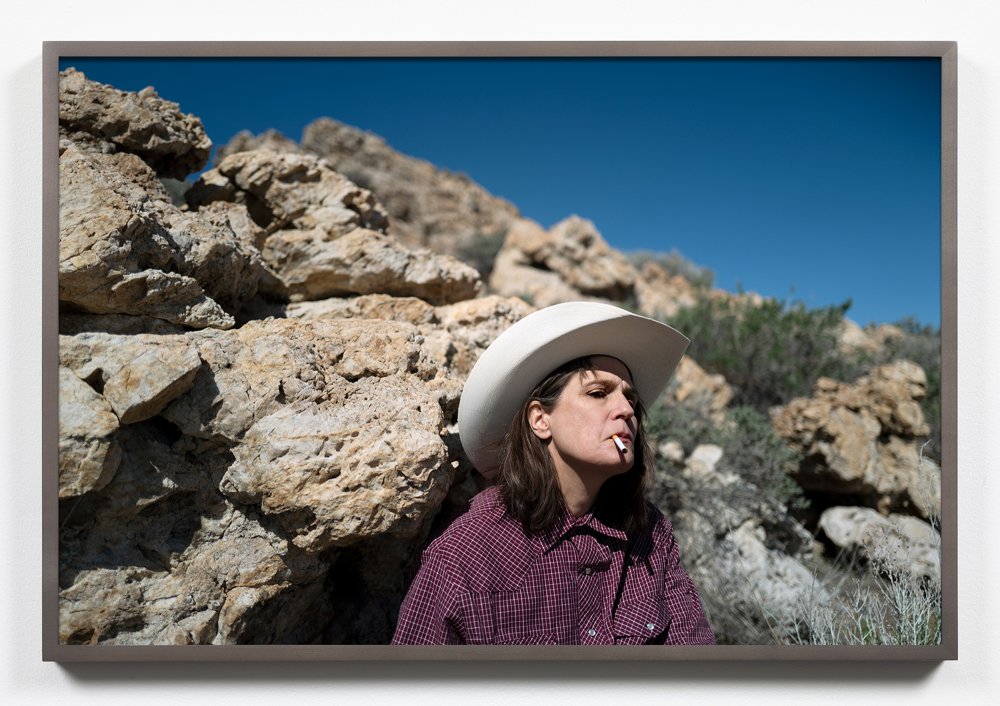 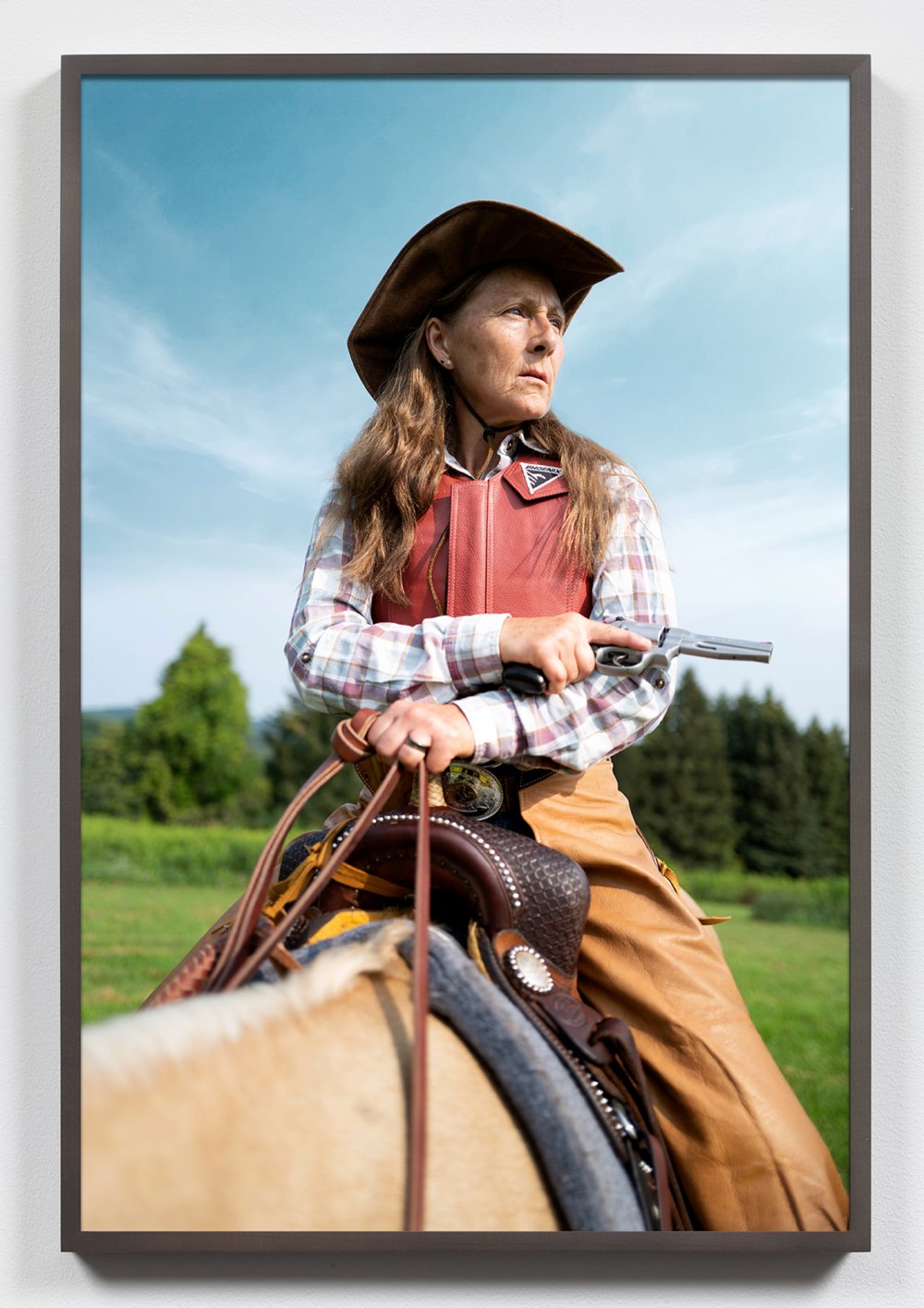 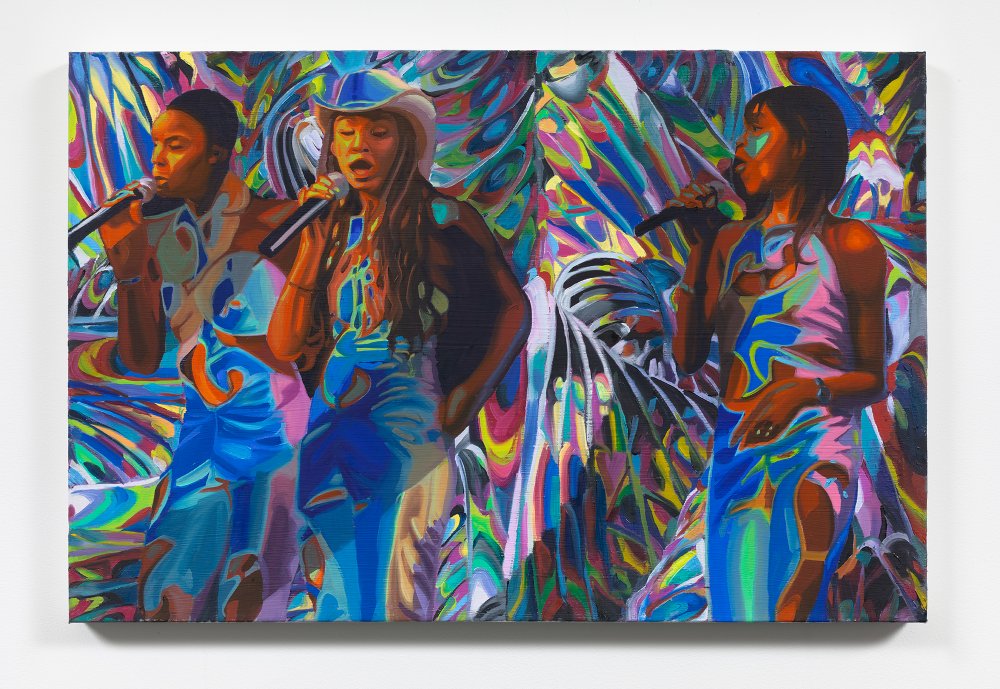 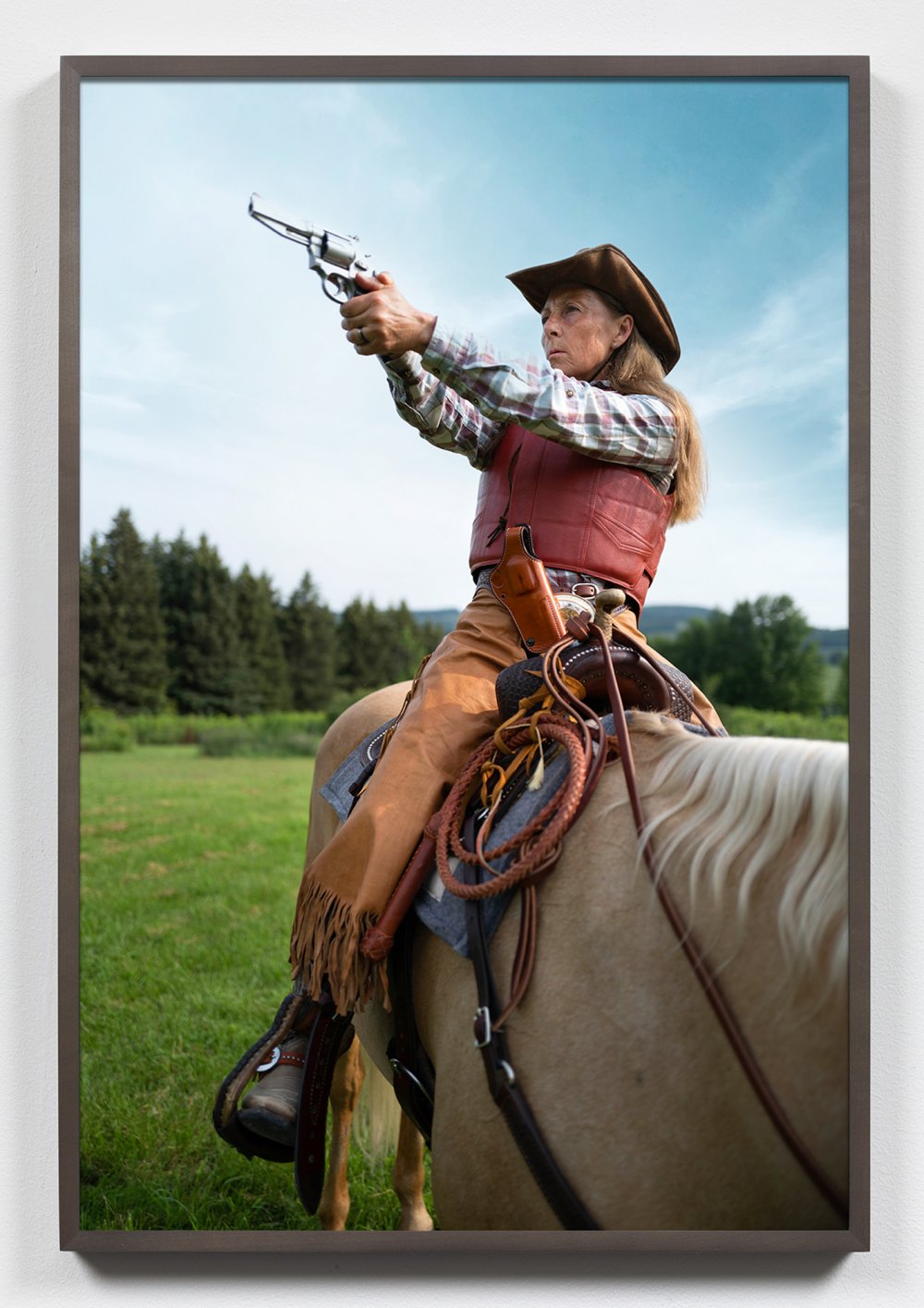 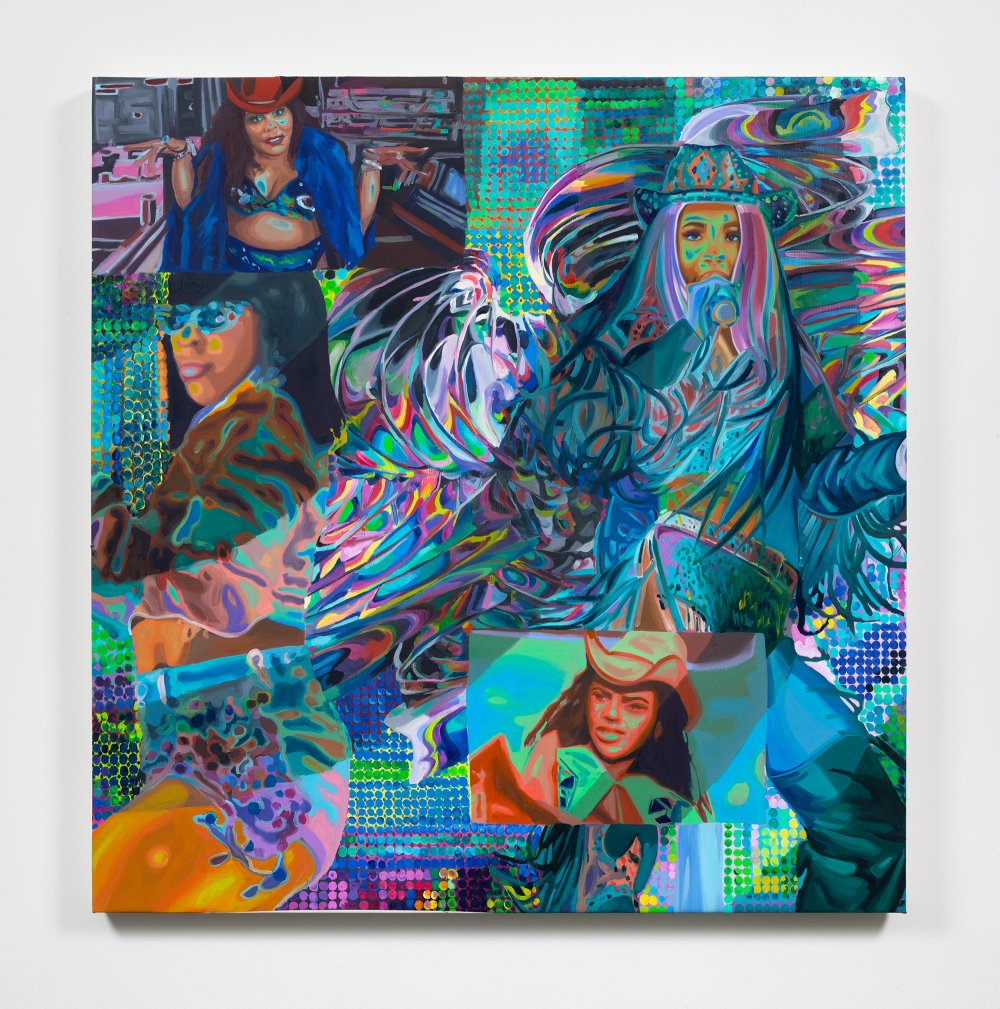 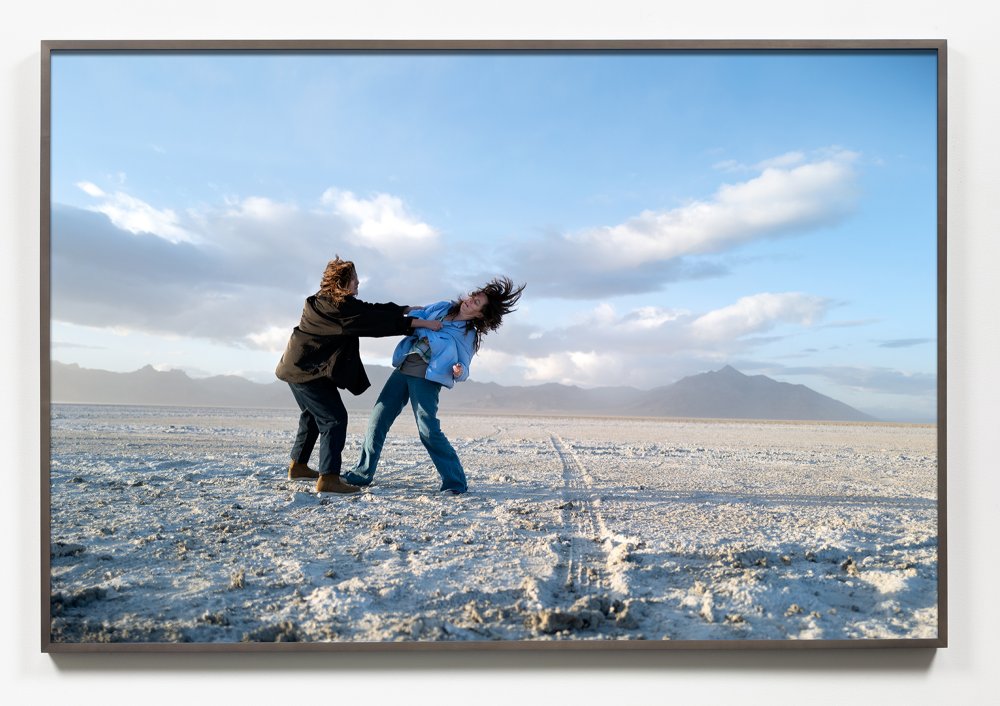 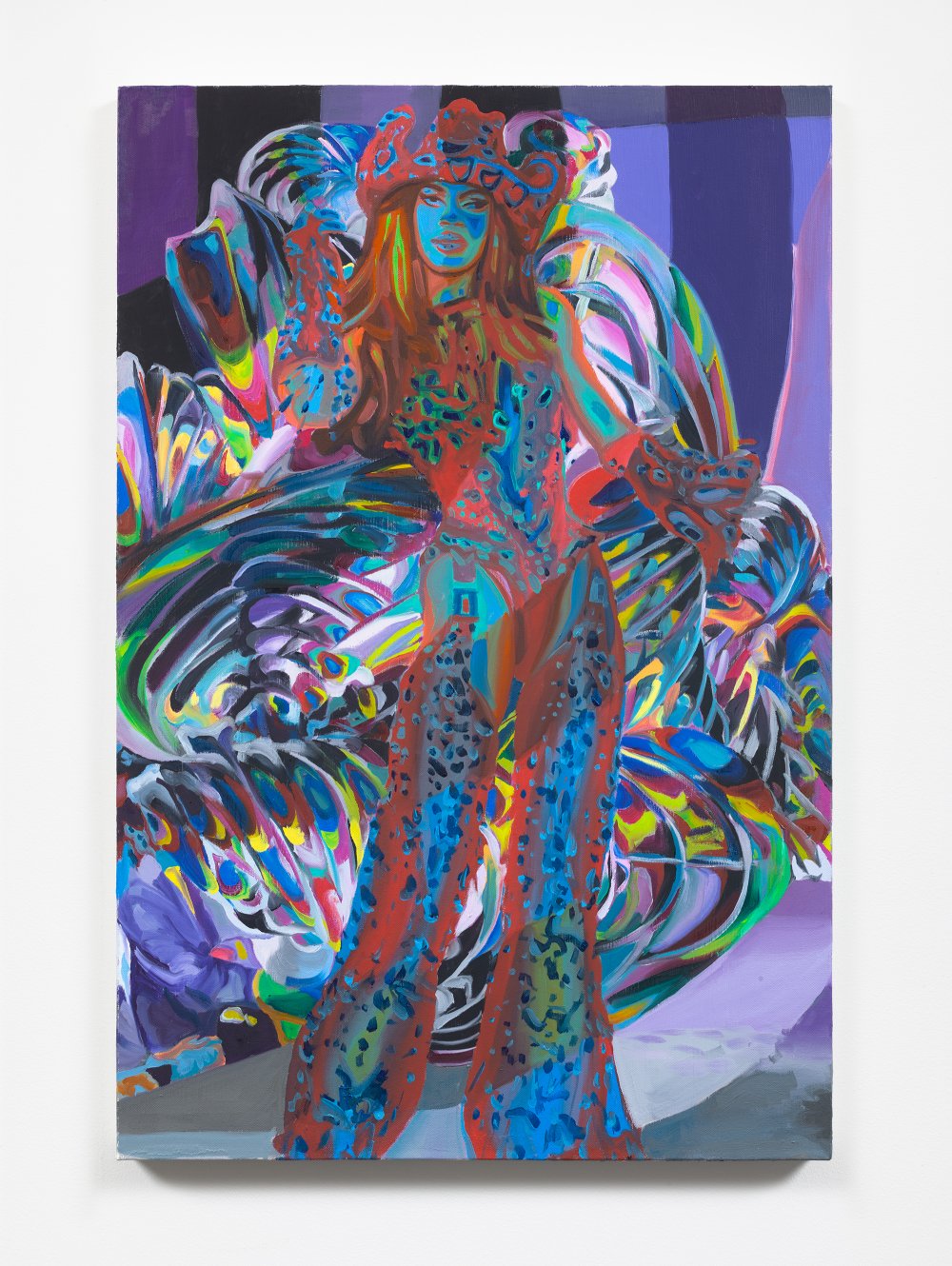 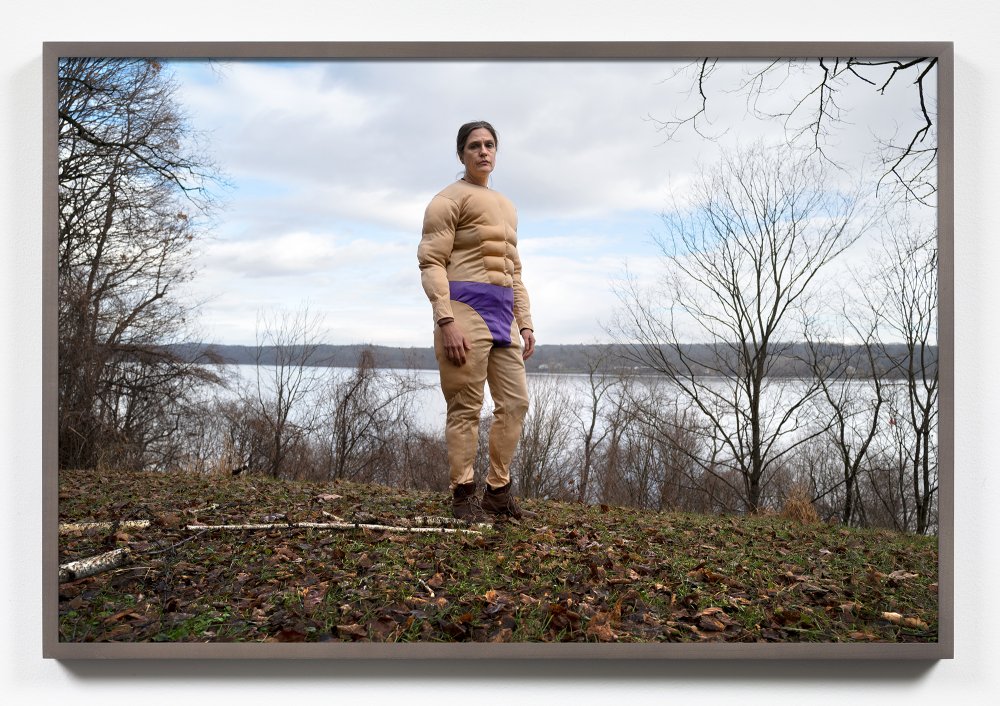 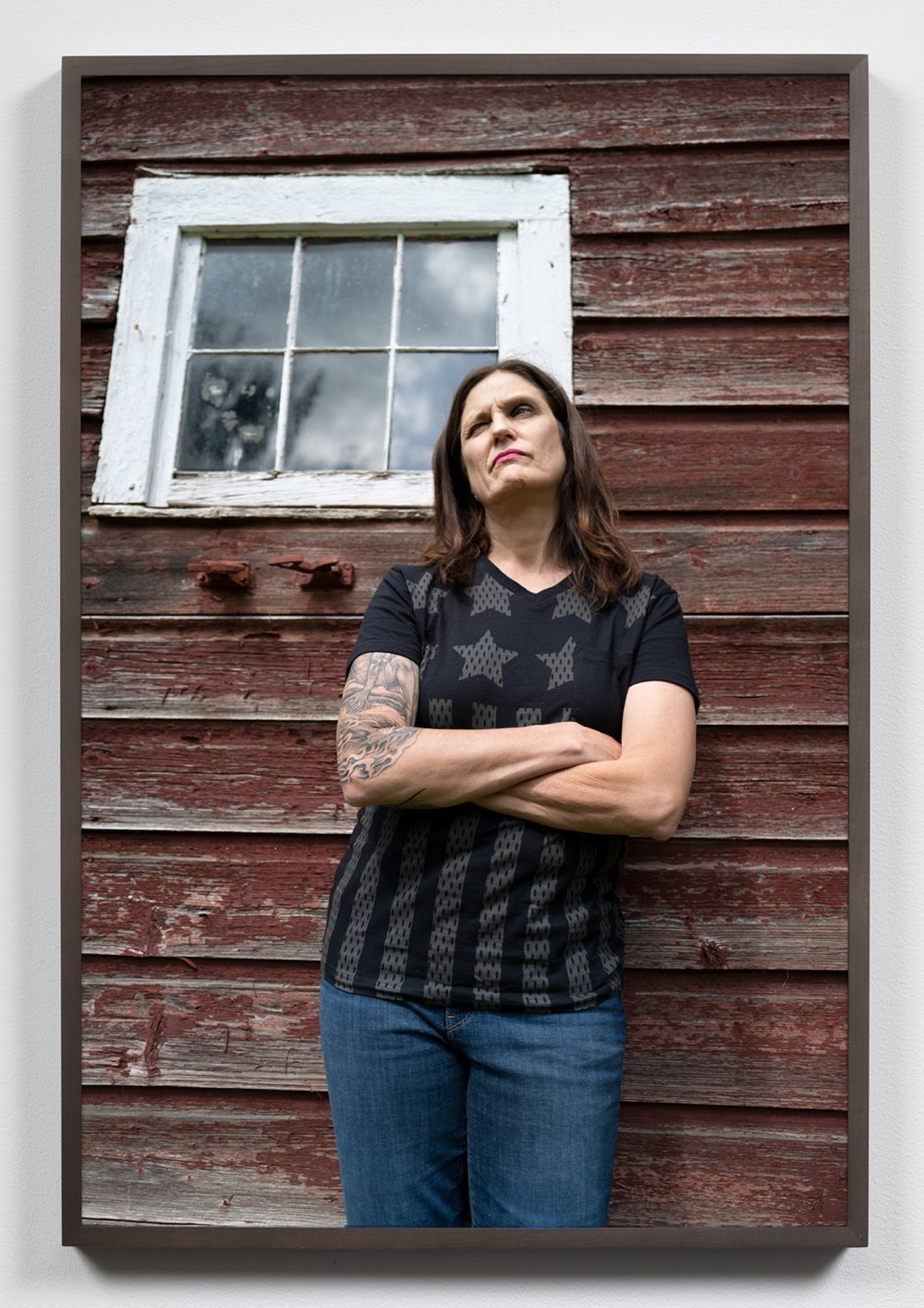 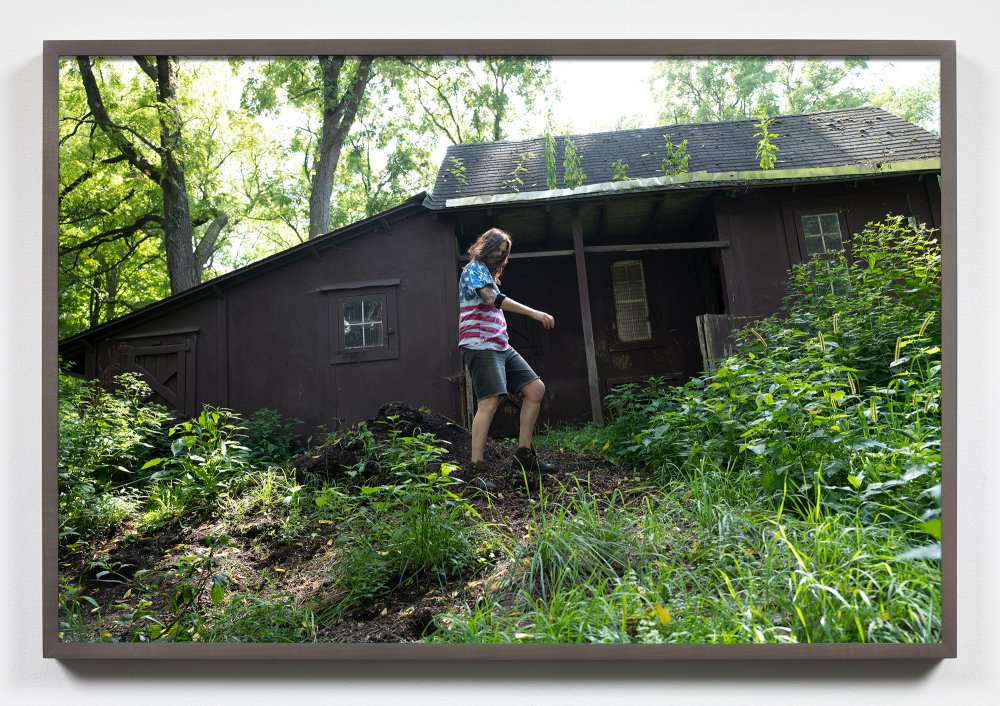 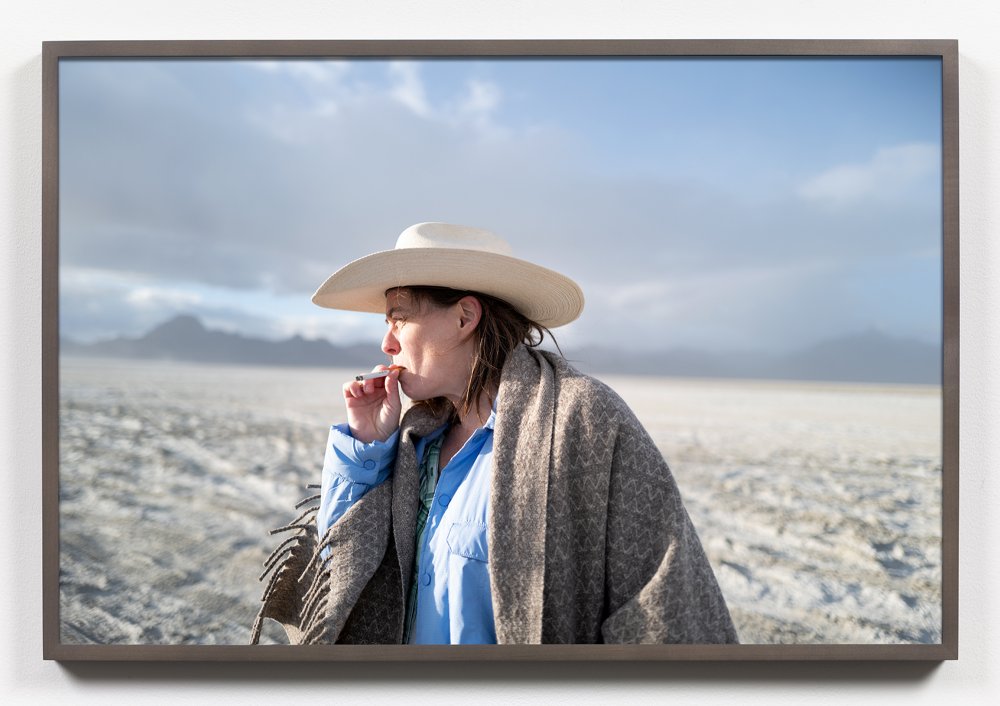 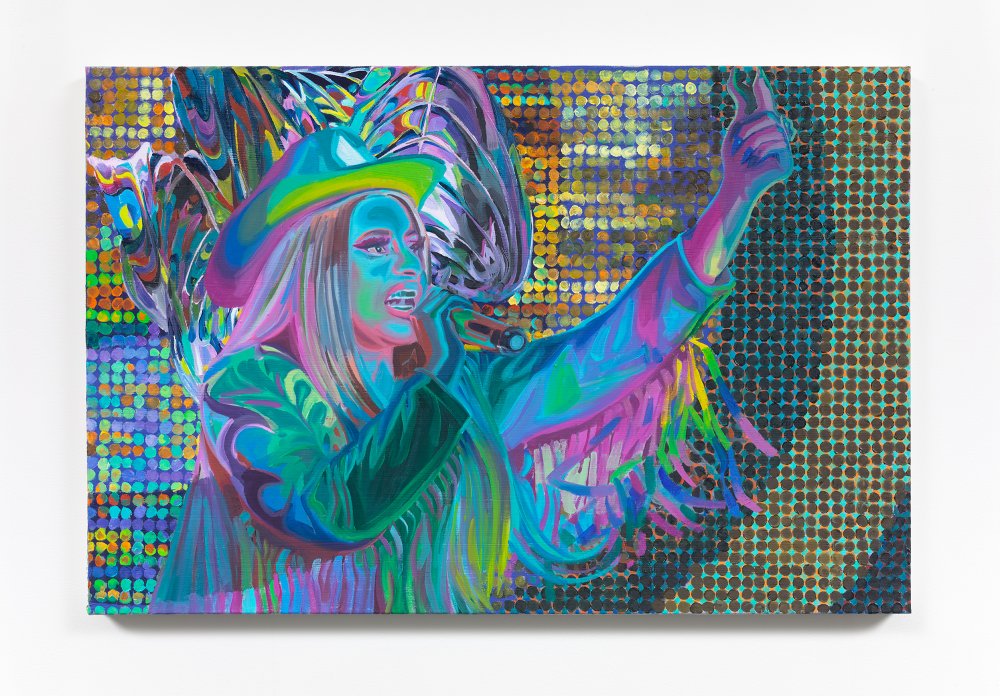 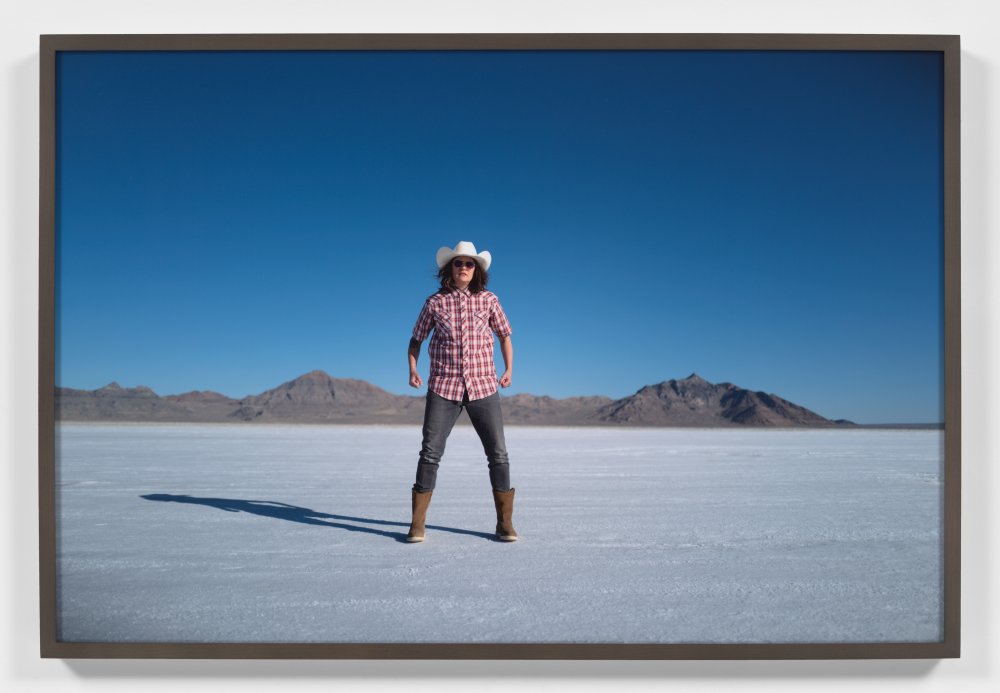 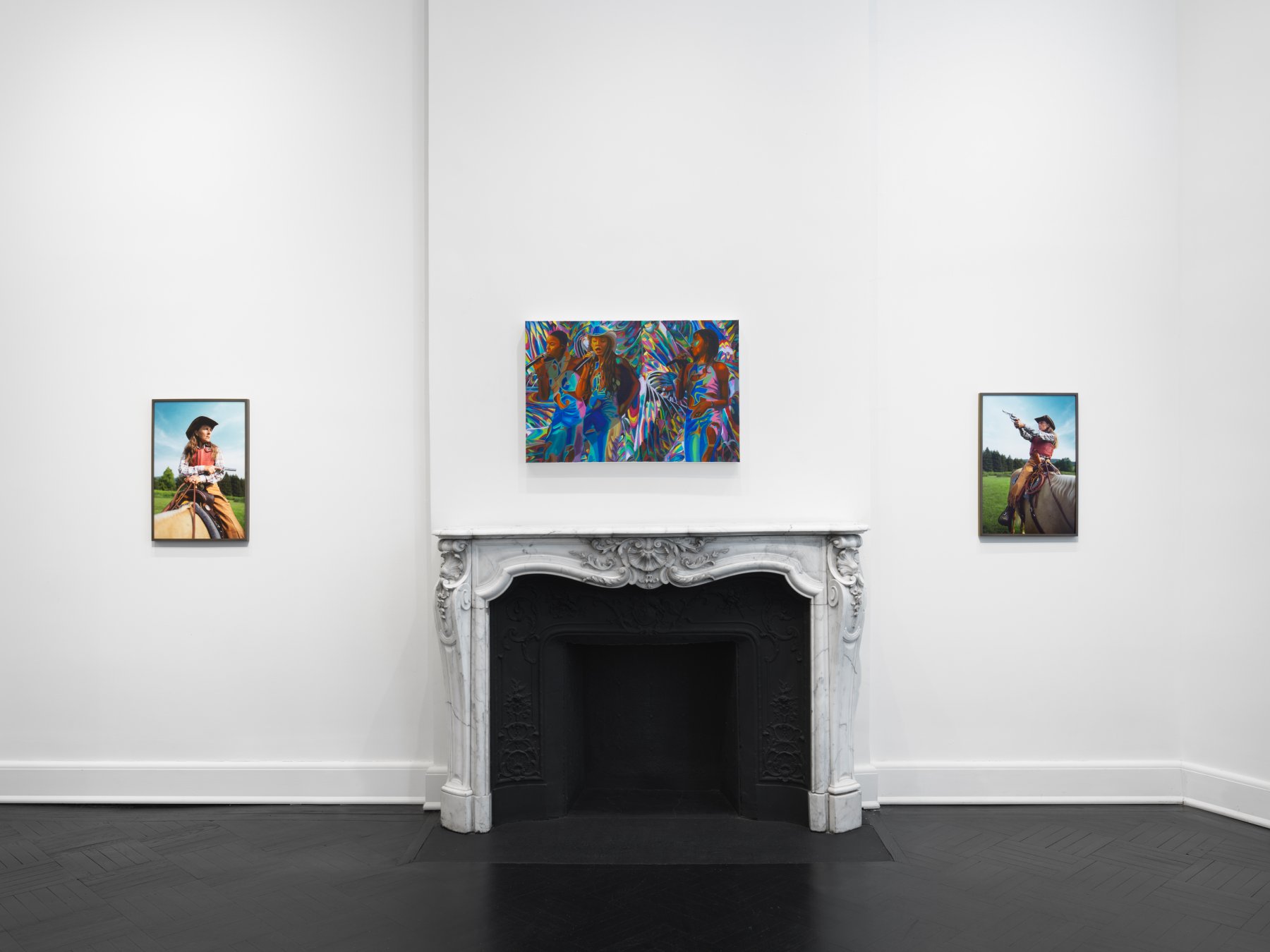 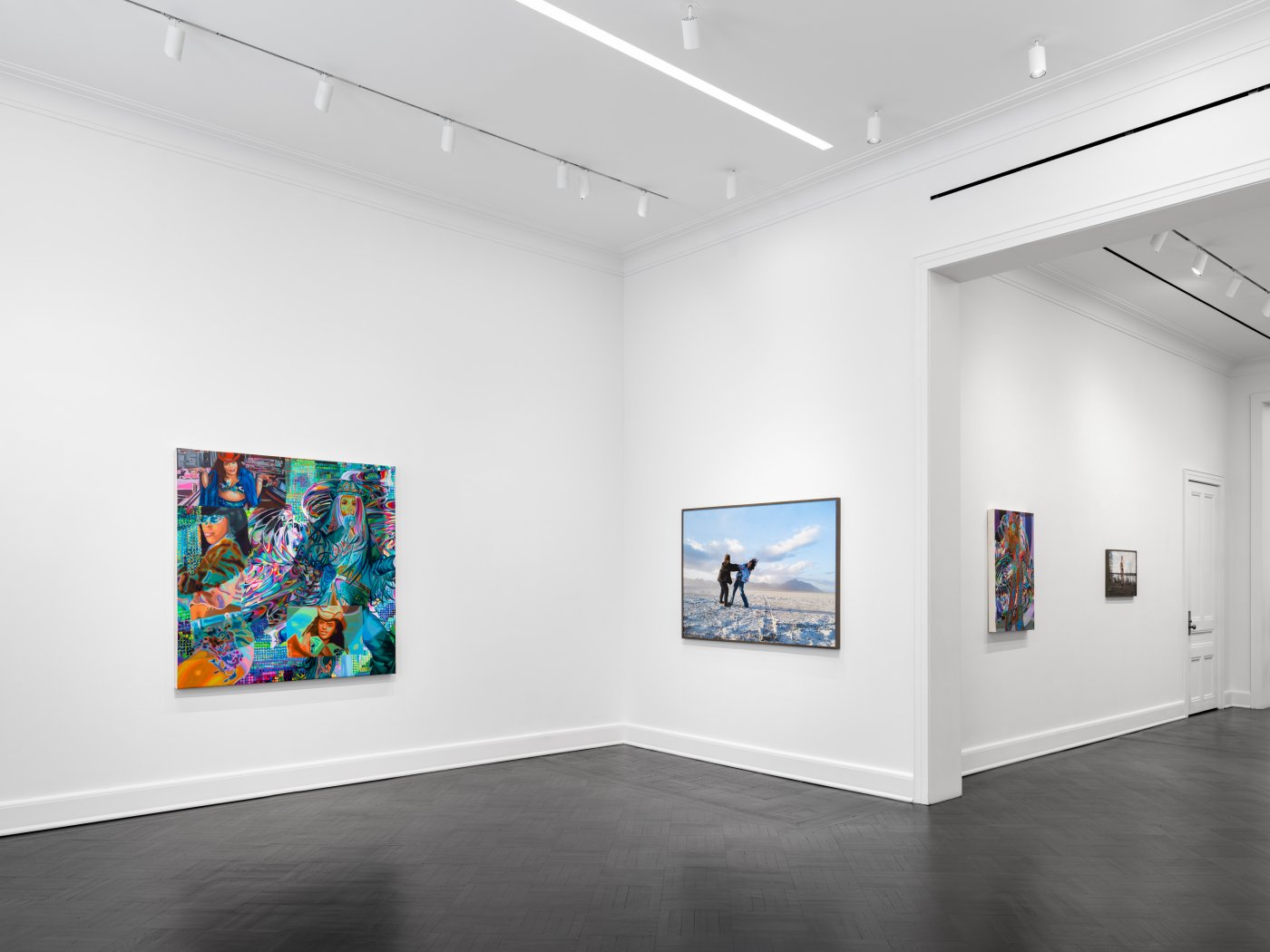 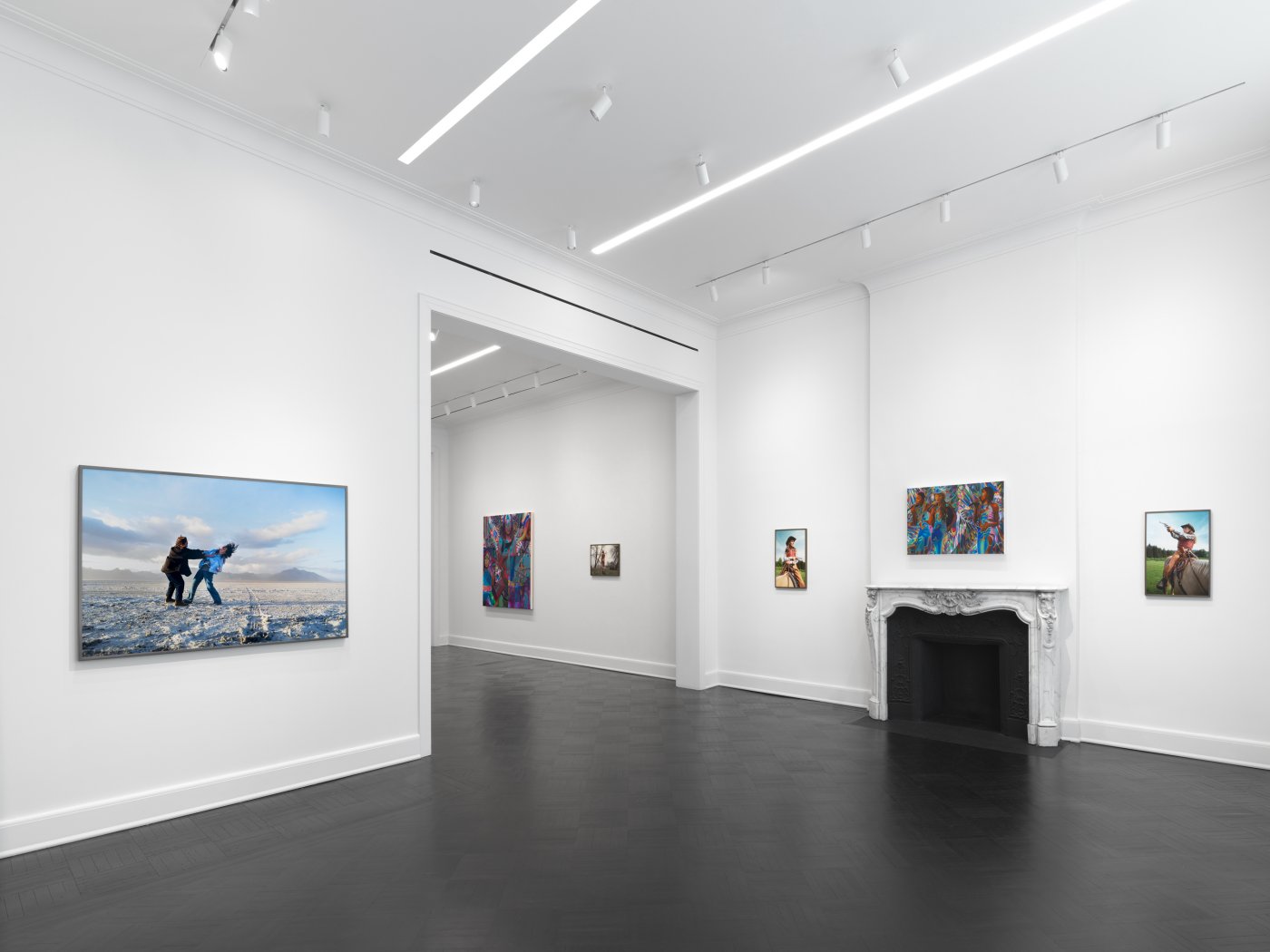 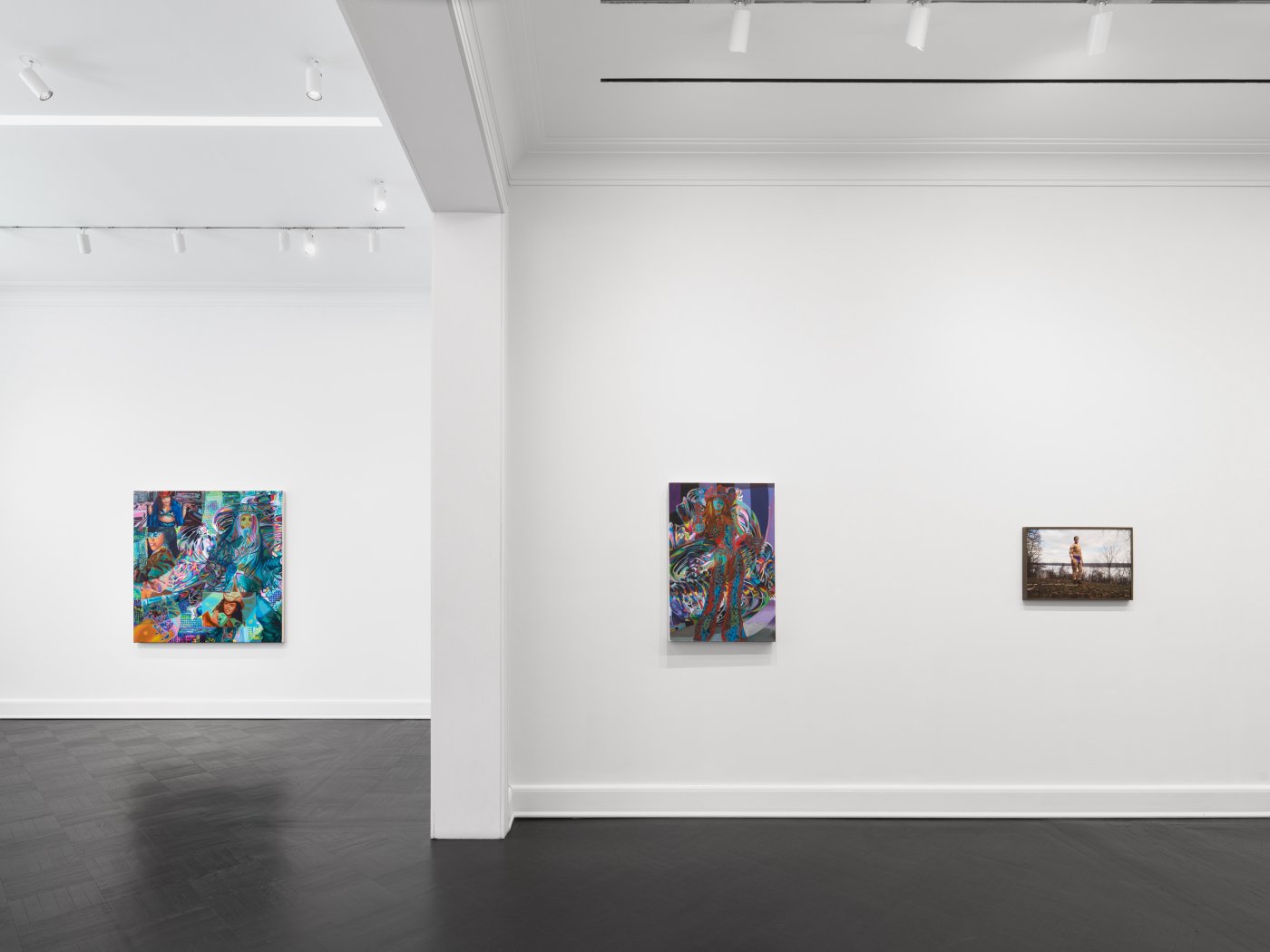 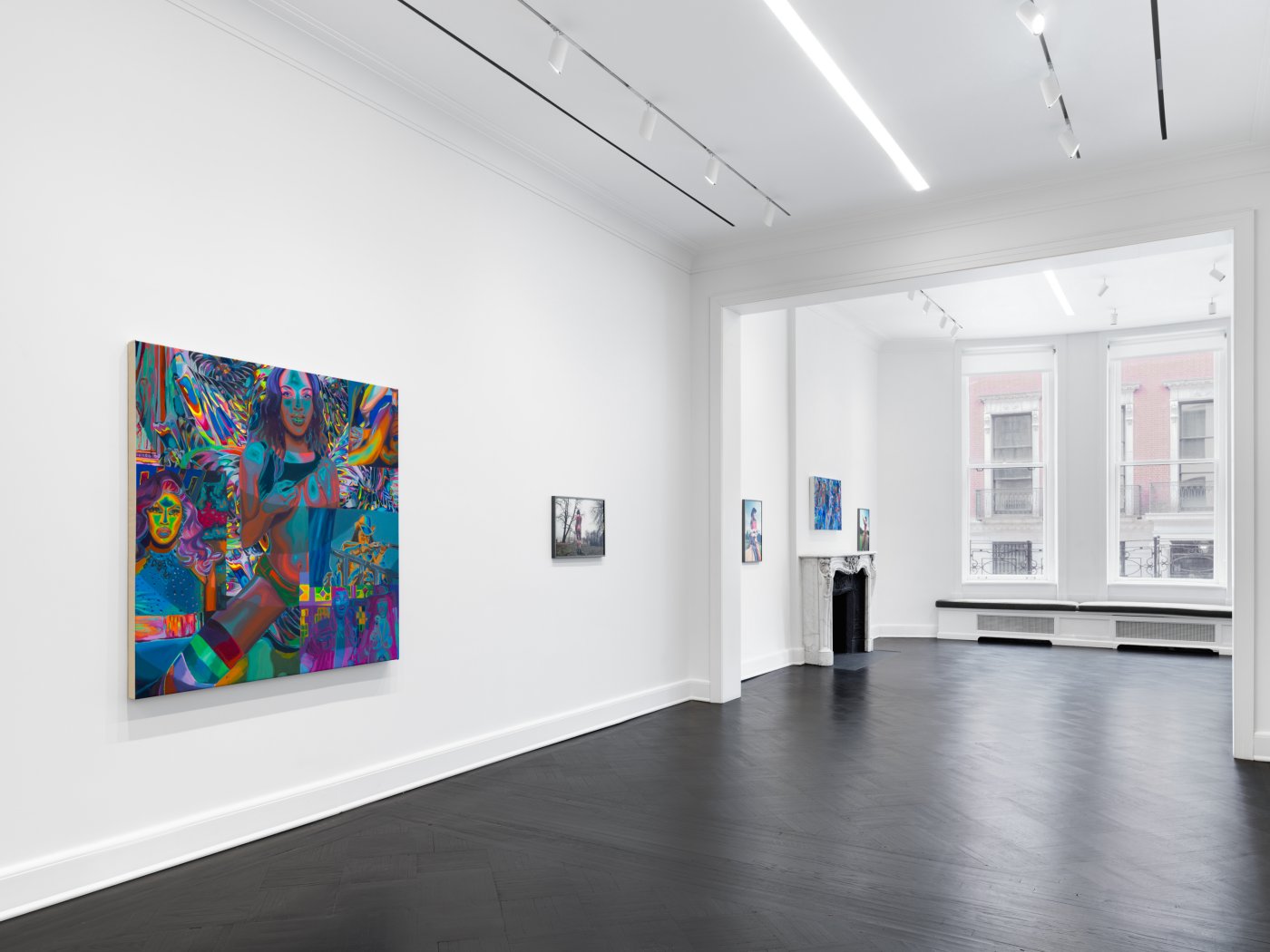 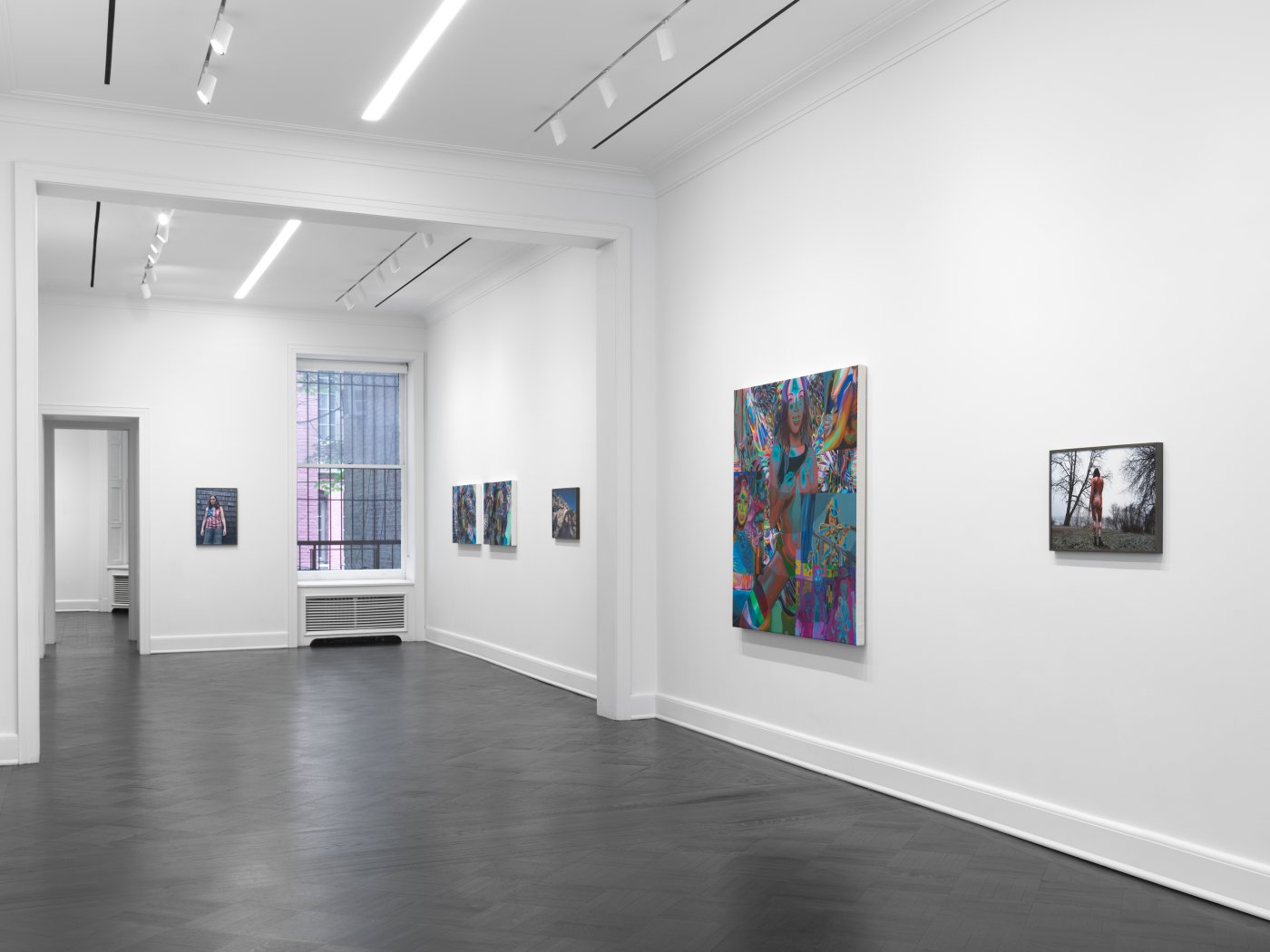 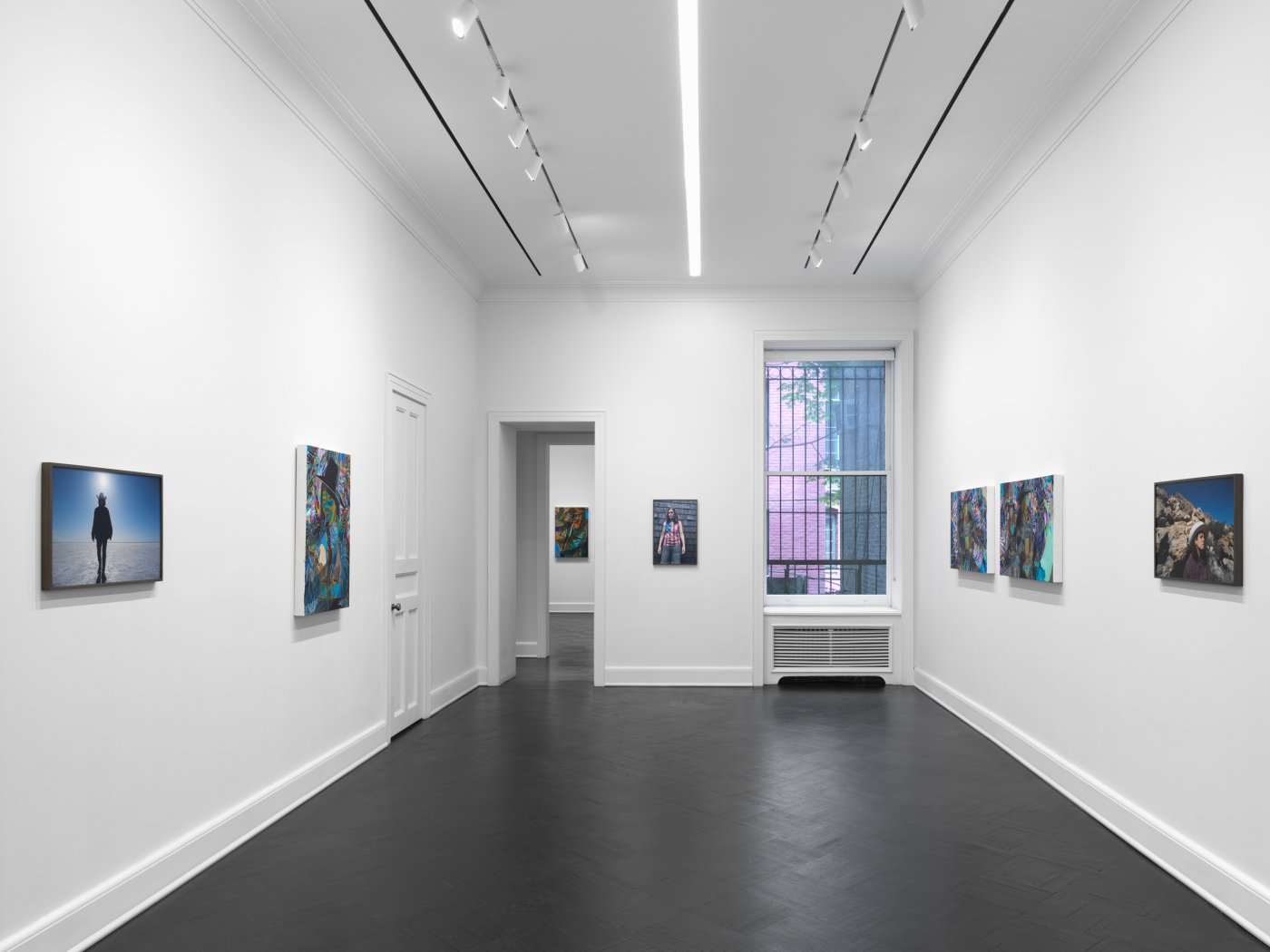 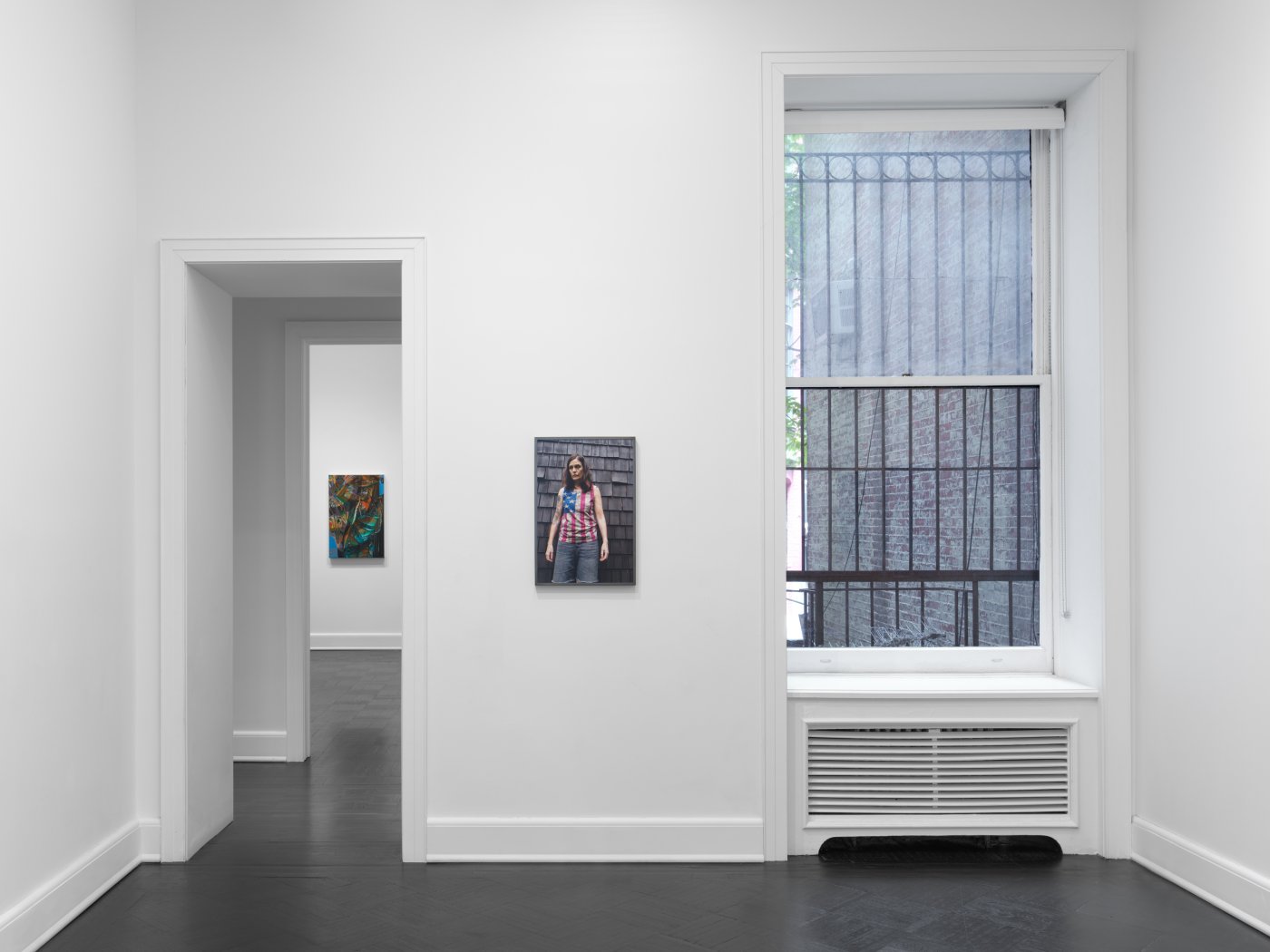 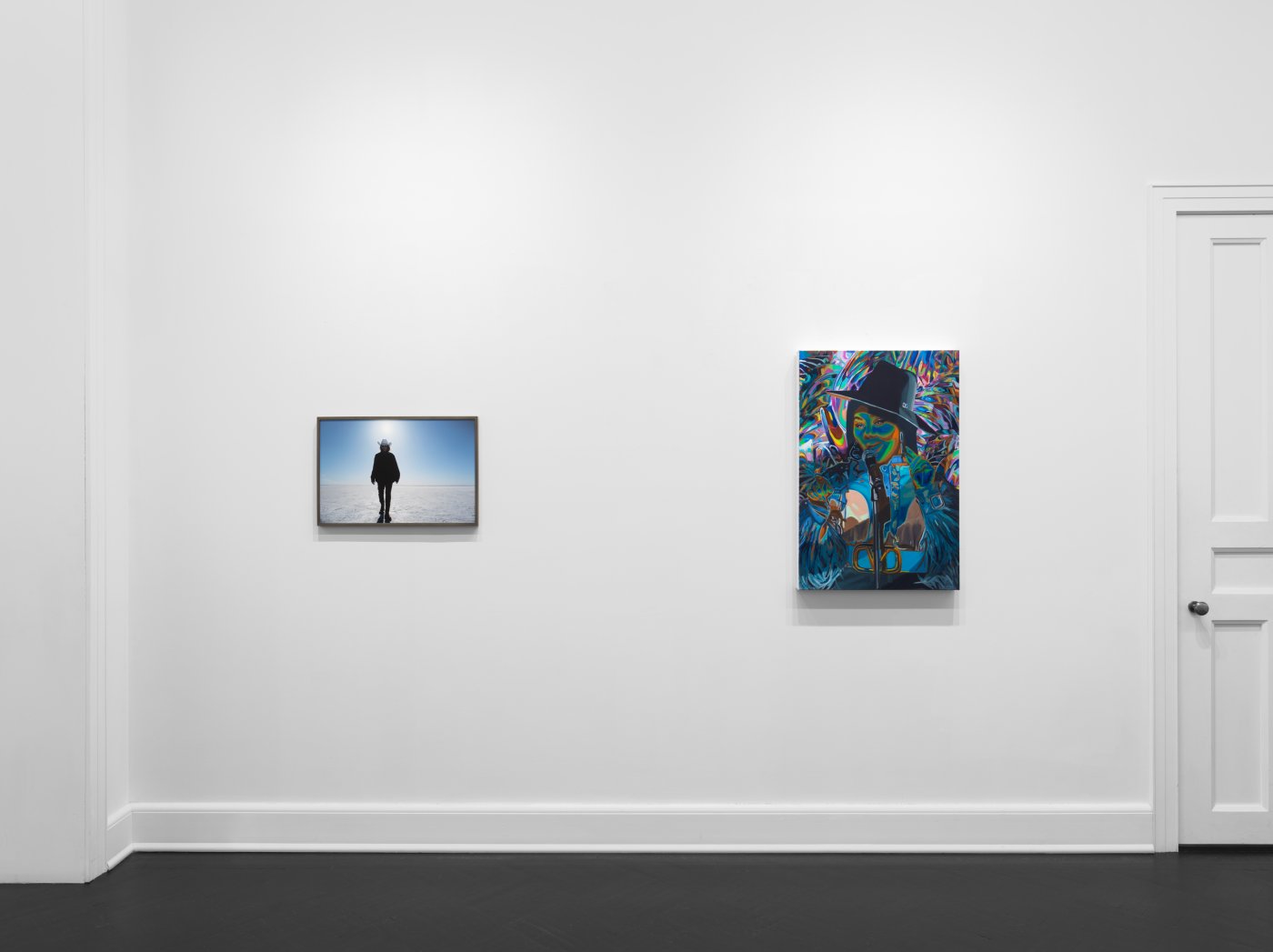 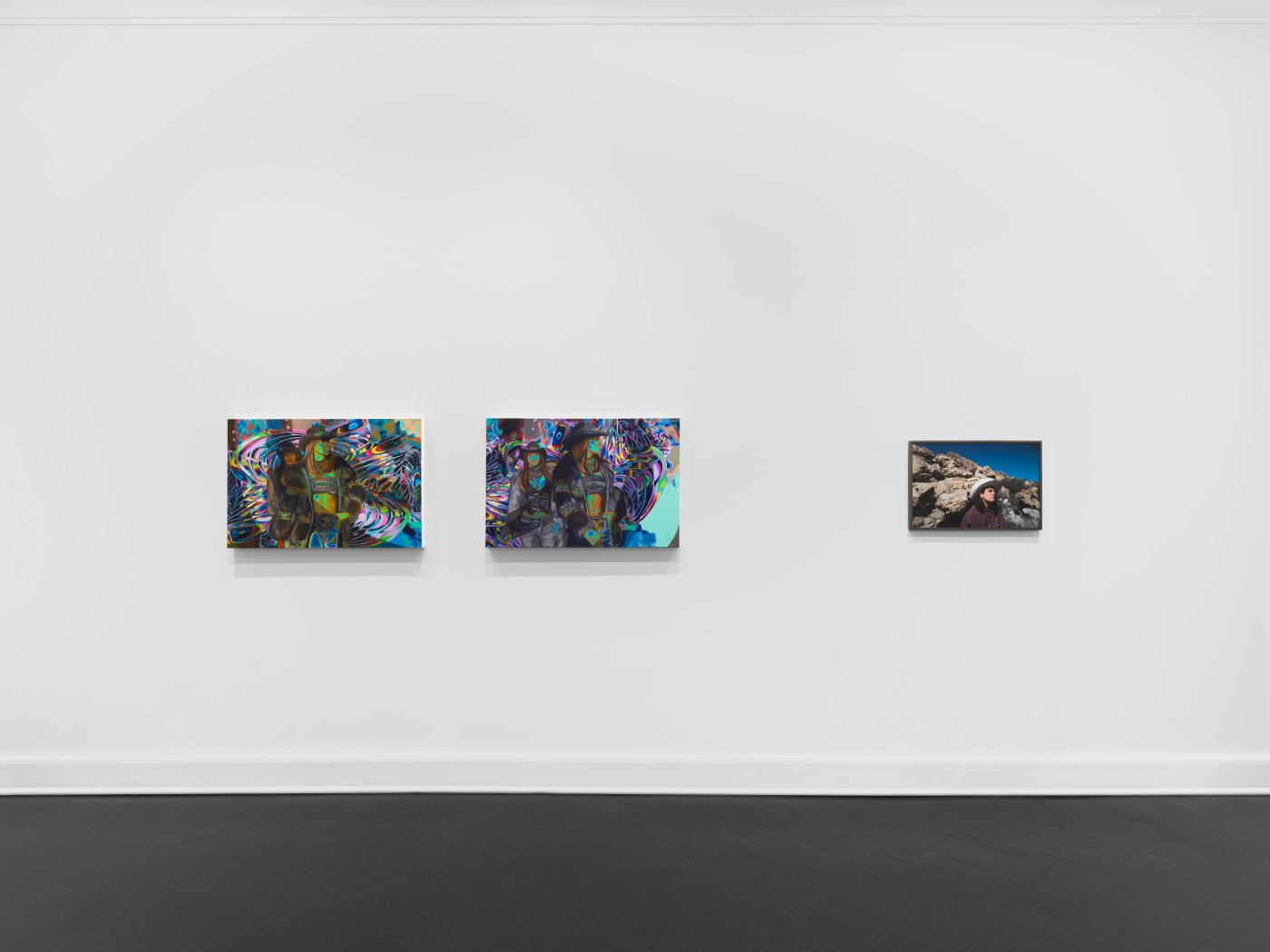 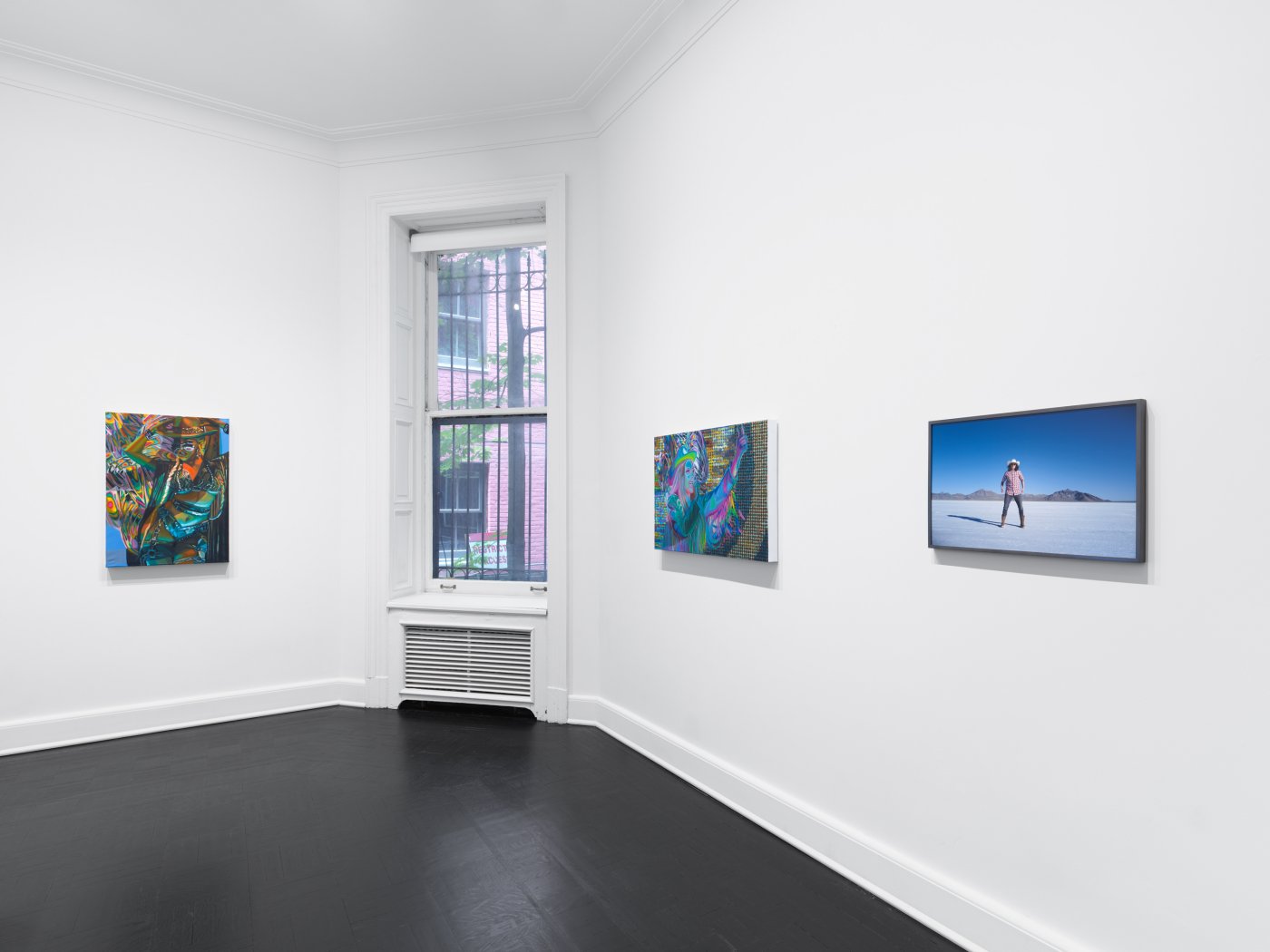 These two artists, from different generations, unveil wildly different, yet related takes on the problem of how to best represent femininity. Cherry shows paintings, Hoey shows photographs. Cherry and Hoey decided to mount their work, which traffics in, and updates, deeply American iconography, next to each other so that the rich connections and differences between their unique creative processes, can be activated and clearly visible.

“Power, sex and the image in culture are subjects that transfix me,” says Hoey. “Caitlin Cherry’s work engages with these themes, but from the perspective of a younger, more digital generation. I’m thrilled to show with her.” Says Cherry: “Dana and I met on social media and we were introduced as collaborators by the writer Aruna D’Souza. I appreciated her artwork’s investment in representations of women, particularly she was depicting women fighting and at the time I was into weightlifting and considering getting into fighting as a hobby. We both share a deep love for unruly women and their complex relationships.”

Cherry’s paintings promote porous and fluctuating notions of gender, sexuality and racial performativity with contemporary celebrities as her “bannermen”. The practice considers the digital interfaces where these images are sourced. Her paintings read like a glitched and chaotic LCD laptop’s desktop screen, with overlapping tabs and browser tabs of research, memes, Tiktoks and porn open simultaneously with Youtube music videos. The idea of the iconic subject, is deterritorialized and information is found on the periphery. Her work captures the destabilized nature of Black femininity, particularly as it is surveilled and performed online, where it exists as an engine of culture to be mined and turned into reaction .gifs. Black femininity is networked with every instance it is performed in past, present, and future and this expanded idea of gender and race, but Cherry’s perspective does not exclude drag queens and trans women. To quote Aria Dean’s perspective in her essay “Rich Meme Poor Meme” on Laur M. Jackson’s “The Blackness of Meme Movement,” “blackness is the living tissue of memes, then memes, so black in so many ways, black as hell, constitute something similar to Robinson’s ‘ontological totality,’ a black collective being.” Through a thorough investigation of the “Yee Haw Agenda”, Cherry in Hello Trouble expresses how if a certain underinvested history is not given due service, it becomes a vehicle for futurity and a malfunction of culture in the present.

Hoey has a long history of pirating masculine tropes as a response to what she sees as flaws in traditional conceptions of femininity. She re-imagines forms of power that are not included in the conventional lexicon of femininity, often substituting aggression in places where one would normally encounter passivity. In Hello Trouble, Hoey uses herself, her karate coach and her longtime collaborator Mary C. Greening to embody icons of American masculinity typically pictured using white men: the cowboy, the flag-waver, the gun-toter and the bodybuilder. Against the backdrop of the American sublime landscape, these cinematic photographs raise questions of American feminine identity, beauty and power.

Dana Hoey is an American photographer born in San Francisco and based in the Hudson Valley, New York. She received a B.A. in Philosophy from Wesleyan University and an M.F.A. in photography from the Yale University School of Art.

The artist’s work examines contemporary female identity through staged and directed photographs and videos, which set off “peculiarly allusive narrative sparks” by echoing familiar photographic and filmic conventions. At the beginning of her career, Hoey photographed her friends, but her oeuvre has since widened to portray women of all ages in various scenarios. Pushing the photographic and video medium’s tendency to blur the line between fact and fiction, interior and exterior appearance, Hoey interrogates the social roles that women play.

In 2017, Hoey conducted a residency project at the Museum of Contemporary Art Detroit (MOCAD) in Michigan from February 11 – May 17. In addition to presenting her photographs and videos, she offered free jiu-jitsu self-defense classes to a group of local young women that the Detroit Police Athletic League assembled. The classes, which the artist filmed, linked the arts with concepts of social engagement, examining ways to foster bonds between police offices and the communities they serve. In the fall of 2012, Hoey presented “The Phantom Sex”, a survey exhibition at The University Art Museum at Albany, New York, featuring works created throughout her career since the 1990’s. An accompanying monograph was published for this exhibition by the university, which includes an essay by Johanna Burton.

In 2019, Petzel gallery hosted “Dana Hoey Presents”, a para fictional exhibition conceptualized, produced and directed by Hoey, in which the artist showed her own photographic work, the performance and sculpture work of Marcela Torres, and a live ladies Muay Thai fight night that took place in a 20’ x 20’ boxing ring installed inside the gallery. The show challenged and confronted preconceived ideas and realities of feminism, combat, violence, self-defense and the martial arts. For her own work, Hoey presented “Ghost Stories”, highly subjective, surreal lightbox collages, made from images shot by Hoey, as well as poster-style portraits of the subjects featuring their names and occupations. In the labeled posters, Hoey aimed to surface the power dynamic of portraiture, particularly as it relates to a white artist taking the image of non-white people.

Caitlin Cherry draws on painting, sculpture, and installation in her multifaceted practice, coalescing into articulate and alluring representations of Black femininity. Filtering these media through layers of digital manipulation, her work draws parallels between Black femme bodies, frequently commodified and positioned as sexual assets, and the seductiveness of art objects in the commercial gallery circuit. Cherry is currently an Assistant Professor of Painting and Printmaking at Virginia Commonwealth University and the founder of the online program Dark Study, a contra-institutional space for radical learning about art and theory. Her paintings have been exhibited at the Bronx Museum, Brooklyn Museum, Performance Space, and The Studio Museum in Harlem, among other institutions of note. She is a recipient of a Robert Rauschenberg Foundation Fellowship Residency and Leonore Annenberg Fellowship. Caitlin has recently participated in the group exhibitions “Convergent Evolutions: The Conscious of Body Work” at Pace Gallery in New York, collaborating with poet, musician, and activist, Moor Mother in a performance designed around her painting installation; “Late Night Enterprise” at Perrotin Gallery in New York, and “Luncheon on the Grass” at Jeffrey Deitch in Los Angeles.