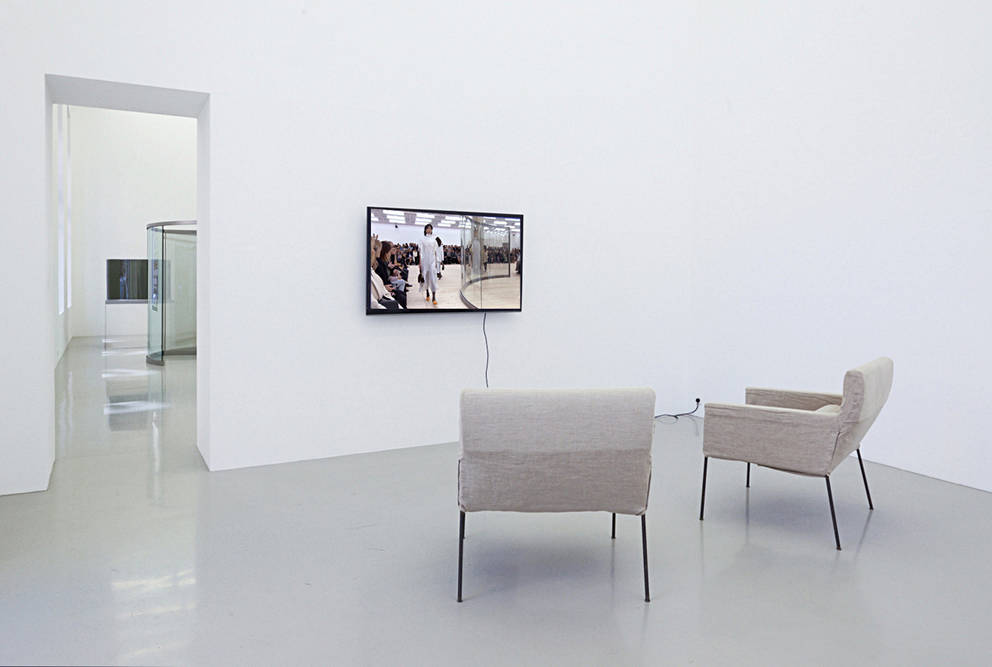 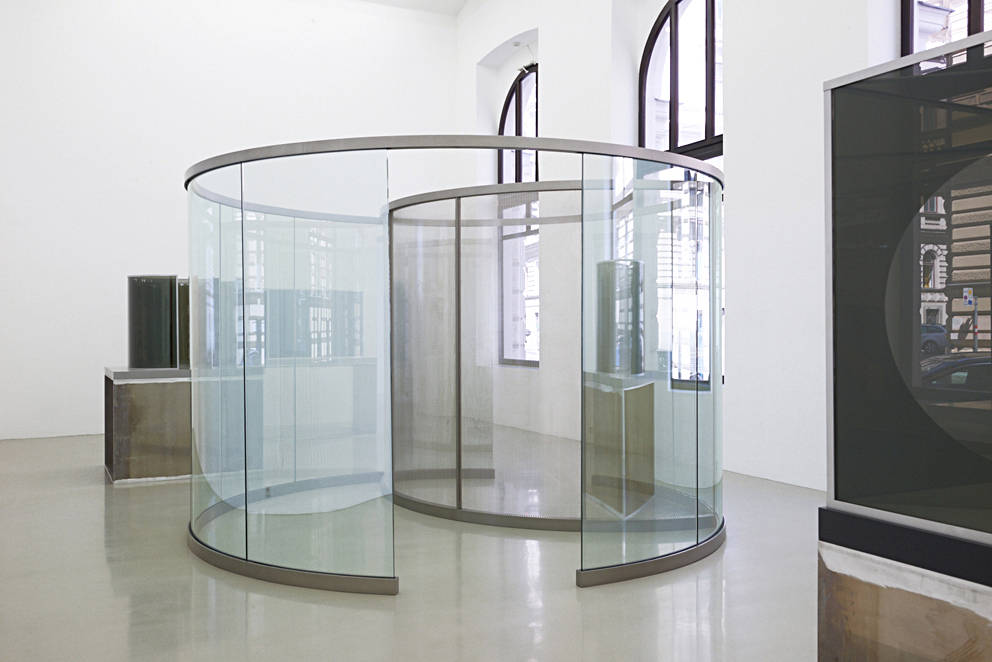 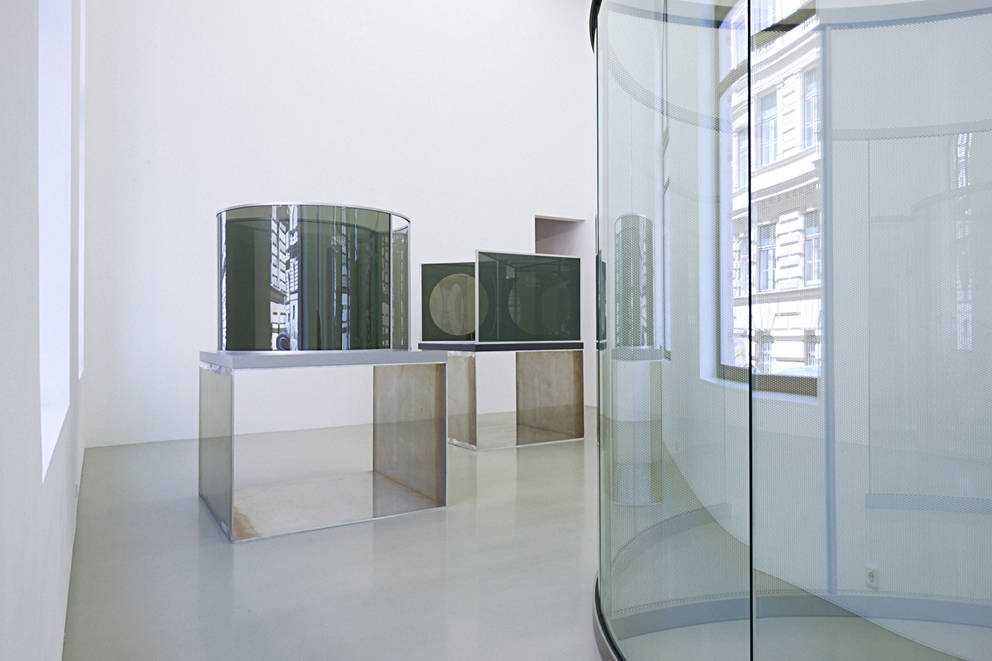 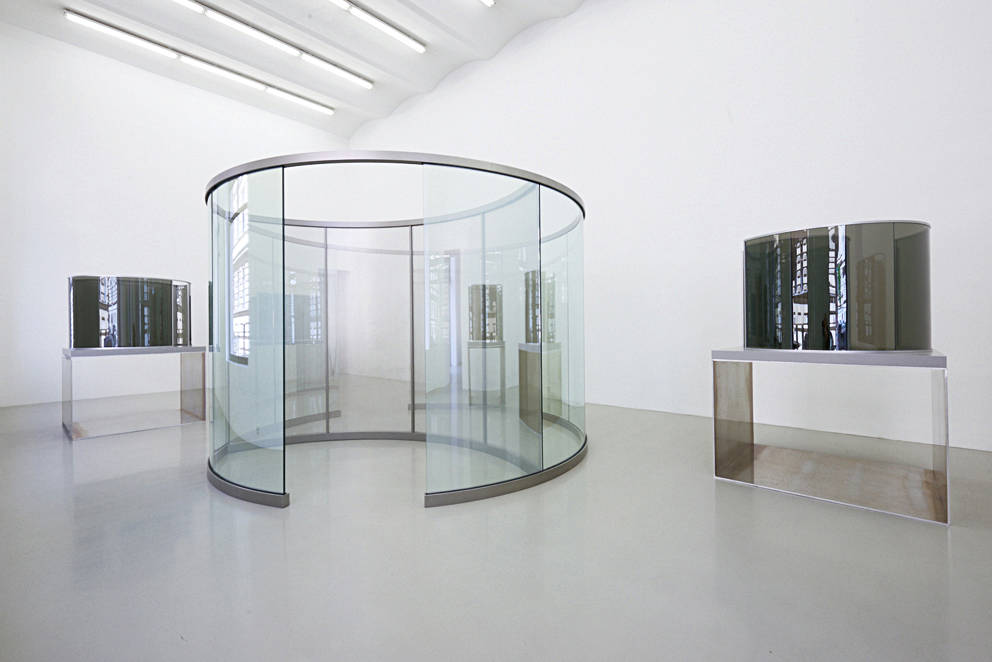 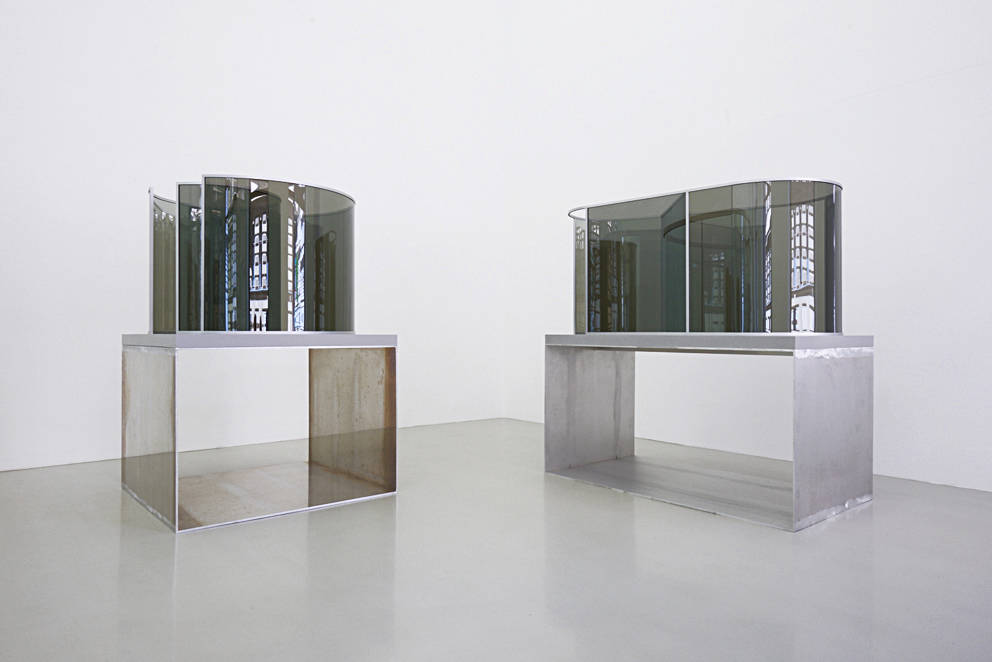 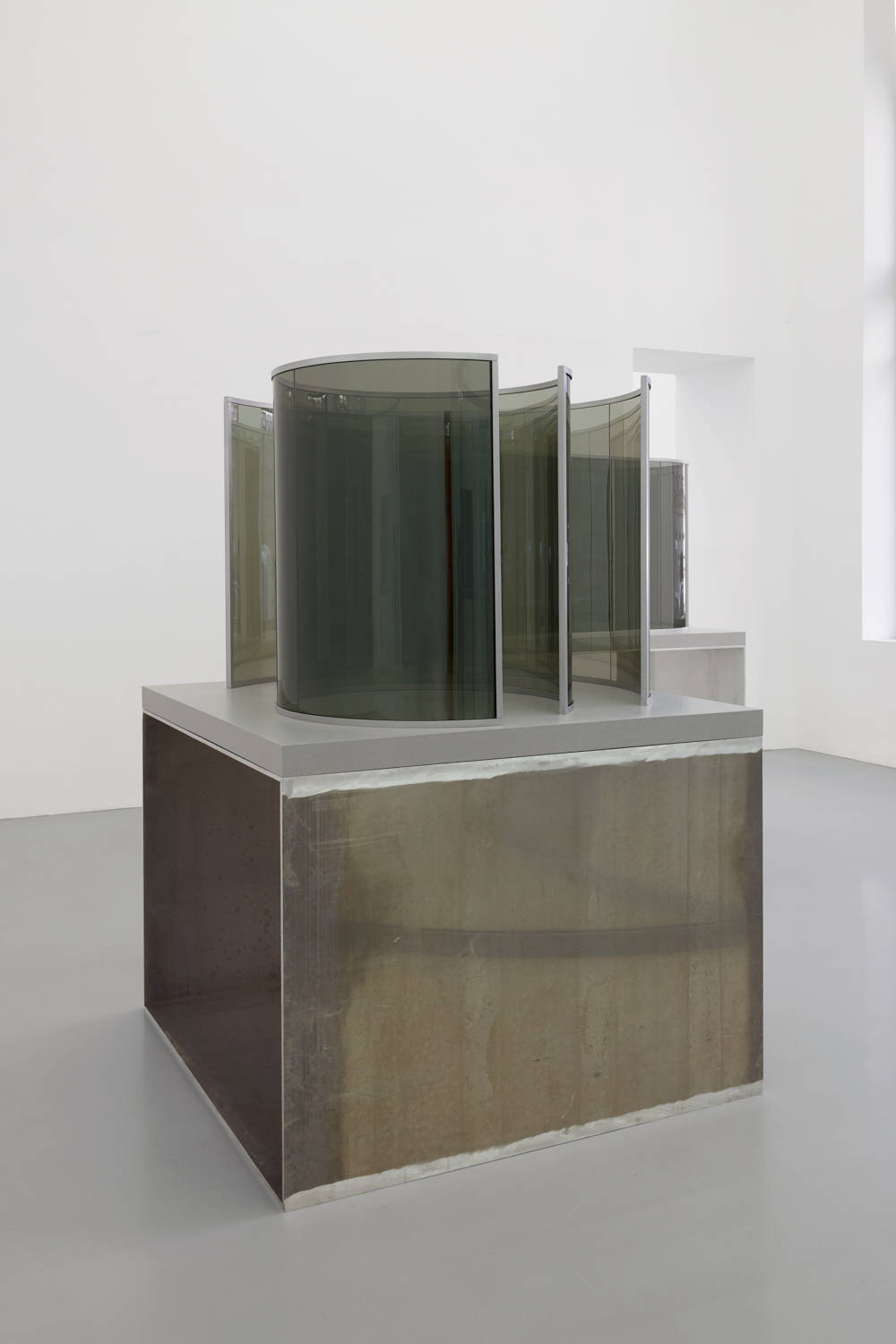 Designer Phoebe Philo had worked with the artist Dan Graham to create the glass S-shaped pavilion in which to show the Céline Spring/Summer 2017 collection. “I wanted to see it cast through the kaleidoscope of Dan’s installation. The fact that people can see themselves and the clothes makes for more complex reflections.” 1)

Peter Eleey, who was organizing Graham’s Walker Art Center show in 2009, has noted a pretty consistent binary quality that runs through Dan Graham’s otherwise incredibly diverse body of work: „It’s in the low/high, inside/outside take on the ways in which Graham views culture, and in the ways viewers see Graham’s work (and often in how the work itself is configured); in the artist’s ideas about both the production and the consumption of culture; and in the various combinations of transparency and reflection that form the crux of many of his projects.“ 2)

Graham is one of those who wrote the story of contemporary art in the second half of the 20th century; his multifarious practice — encompassing theoretical writing, text pieces, performances, video works, installations, and architectural interventions — has shaped generations of artists. In 1966 Graham published in Arts Magazine Homes for America, a mock scientific analysis of the suburban habitat that initiated what would become a relentless tackling of the city plan and the politics of the gaze — topics that lie at the core of his world-famous pavilions.

„I thought it was about the white cube, so the idea was: what would happen if I cut away from that white wall and made a window? Then it would be architecture. I thought: why can’t artists do architectural models? There were two categories of models. One category were almost fantasy situations like Alteration to a Suburban House (1978), Video Projection Outside of Home (1978), or the Clinic for a Suburban Site (1980), which, in a way, were making the primary Venice Biennale piece Public Space/Two Audiences (1976) into almost architecture. The other group were new works that were both sculpture and pavilion. I was interested in the (Mies van der Rohe) Barcelona Pavilion (1929), but also I was interested in pavilions in city situations, in other words telephone booths and bus shelters. What I liked about the pavilion was that it was somewhere between function and possibly architecture art. What I’m trying to do is deconstruct the corporate two-way mirror — which is the one-way mirror — into something more like a pleasure situation, a kind of heterotopia. As you walk around the piece, the sky changes, and your body changes and you can see the body changing, and other people’s bodies changing. So the time element, the durational element, in relation to sky conditions is very important.

In America, the ecology movement began with Jimmy Carter. Two-way mirror glass came in. Corporations wanted to cut down air conditioning costs, so with two-way mirror glass, the side that reflects the sun means that the inside doesn’t have to be cooled by air conditioning. Also it became the beginning of surveillance, because in the inside you could look outside without being seen on the outside. And the outside skin, which was mirror, reflected the sky so the corporation seemed to be identifying with the environment. And that was all because Jimmy Carter wanted to cut down oil consumption“. 3)

In 2004 TRANS> (Sandra Antelo-Suarez) with co-producers Thyssen-Bornemisza Art Contemporary Vienna, Foundation 20 21 New York, Walker Art Center Minneapolis and Voom/LAB New York commissioned and produced a rock opera performed by puppets Don’t Trust Anyone Over 30. A 35-minute Video is on show in the mezzanine space of the gallery. Since collaboration was at the heart of Don’t Trust Anyone Over 30, Dan Graham (Concept) collaborated with Tony Oursler (Visual Conception) and Rodney Graham (Recorded Music) and participated in a discussion with several other artists who worked on the piece, like including Phillip Huber (Marionettes), who created its puppets, and members of the punk duo Japanther (Live Band).

From the VRchives: Dan Graham @meyerkainer Vienna, presented from 26 April to 31 August 2019 Graham is one of those who wrote the story of contemporary art in the second half of the 20th century, his multifarious practice shaping generations of artists click the link in our bio for further details #fromthearchives #360 #360art #360photo #DanGraham #MeyerKainer #GalerieMeyerKainer #Vienna #gallery #exhibition #art #sculpture #installationart #abstract #geometry #immersive #contemporaryart #modernart #seemoreart #GalleriesNow #lifestyle #ID15419