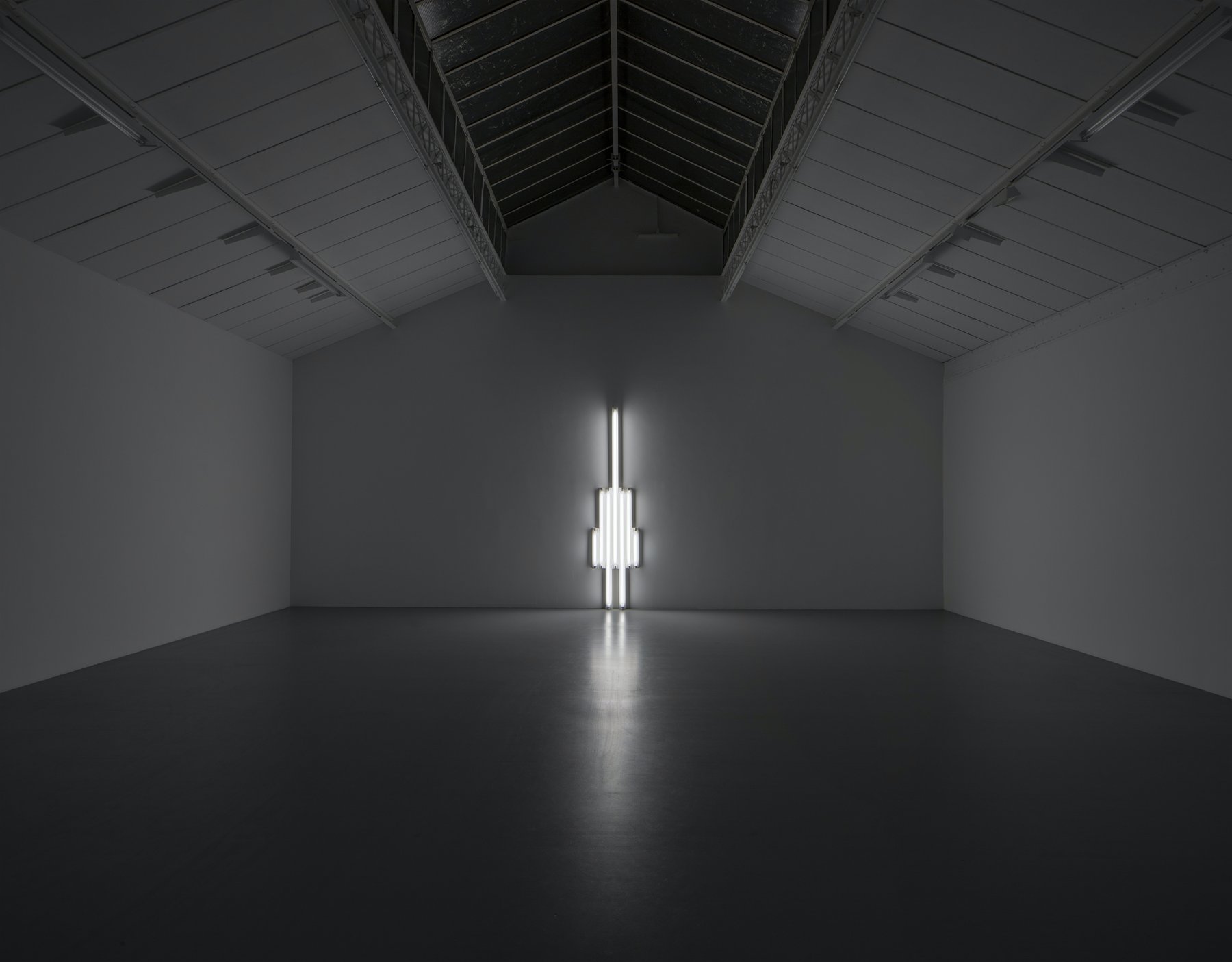 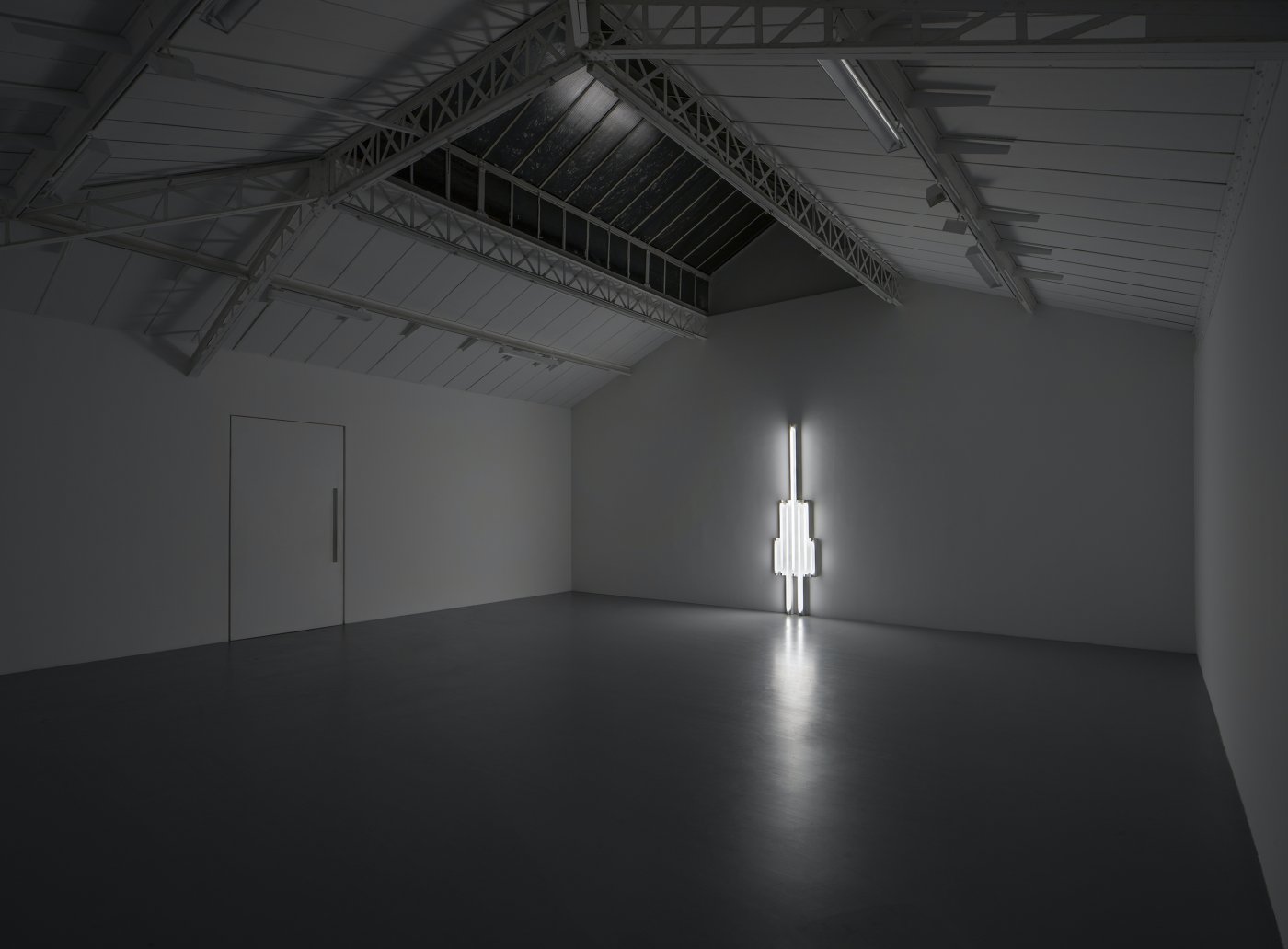 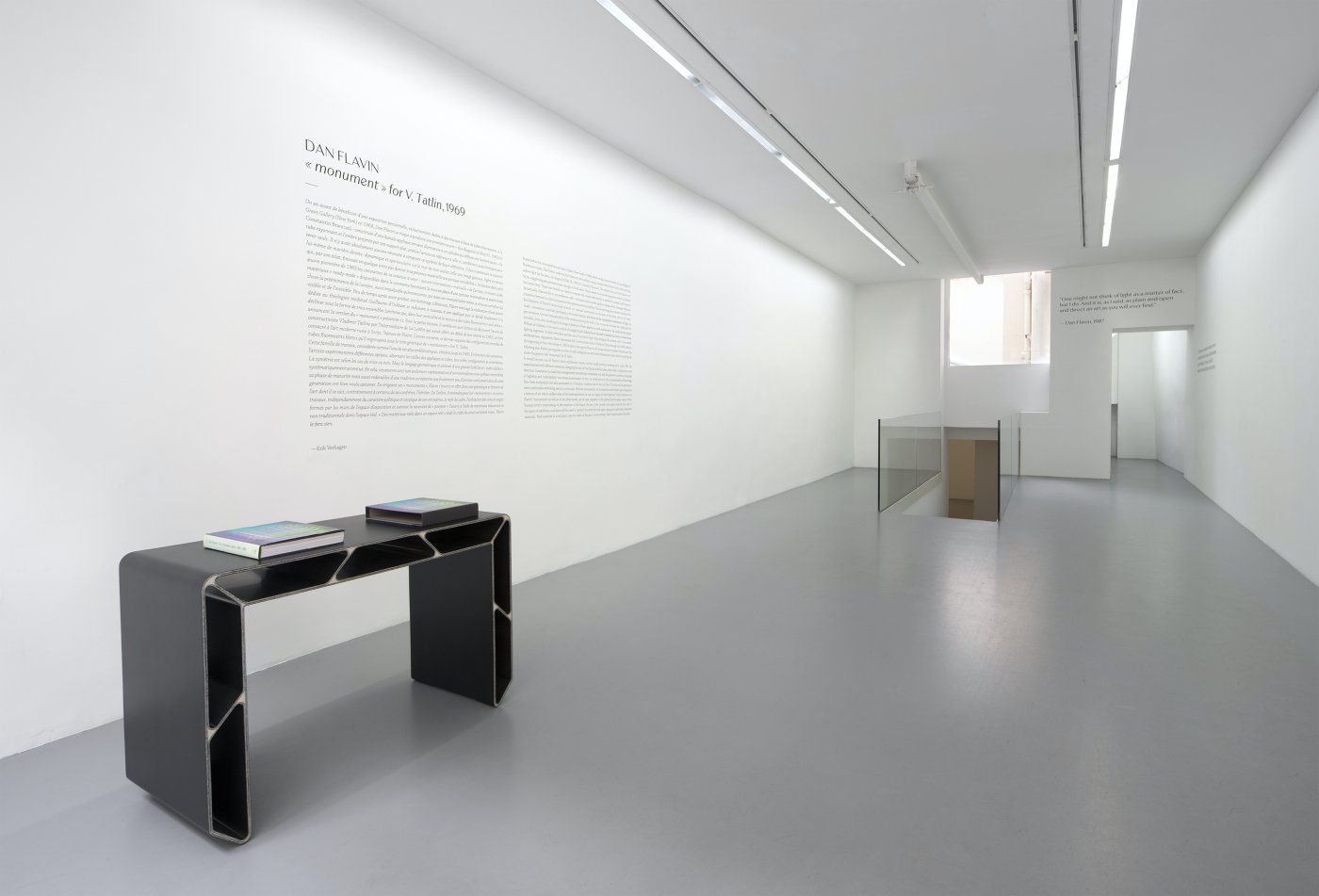 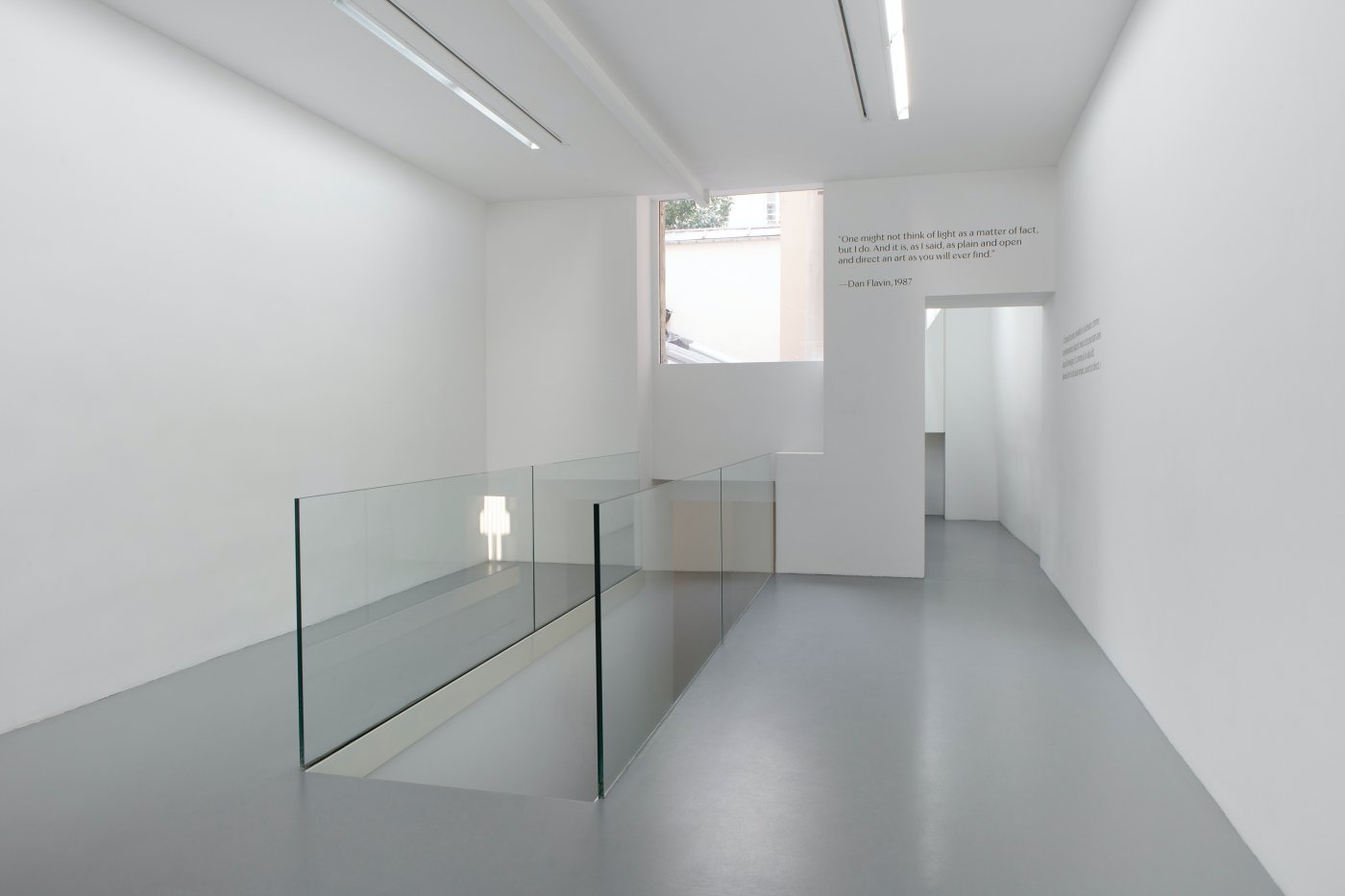 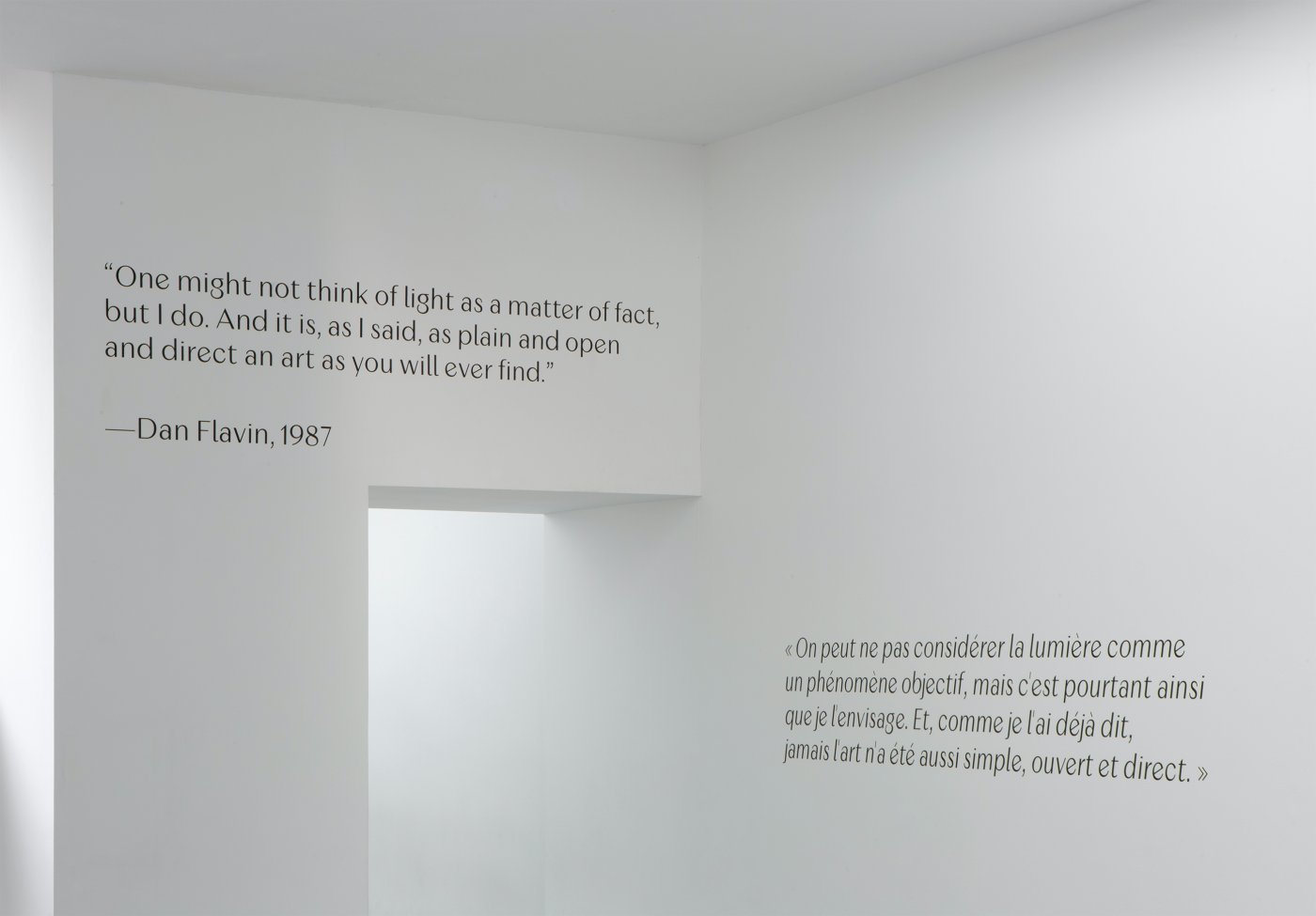 A year before his solo exhibition at Green Gallery (New York) in 1964, which would consist entirely of assemblages of fluorescent tubes, Dan Flavin made his first foray into the medium, using a simple metal fixture and a tube emitting yellow light for his piece, the diagonal of May 25, 1963 (to Constantin Brancusi). ‘The radiant tube and the shadow cast by its supporting pan seemed ironic enough to hold alone,’ Flavin wrote in an autobiographical sketch published two years later. ‘There was literally no need to compose this system definitively; it seemed to sustain itself directly, dynamically, dramatically in my workroom wall—a buoyant and insistent gaseous image which, through brilliance, somewhat betrayed its physical presence into approximative invisibility.’ This pioneering piece already contained the key elements of Flavin’s future body of work: no ‘manual’ intervention on the part of the artist, the use of ‘ready-made’, commercial materials privileging a minimalist syntax, and above all the impalpable evanescence of light, its pre-eminence, the very immateriality of the medium placing the work at the crossroads between the visible and the invisible. Soon after finishing his homage to Brancusi, Flavin planned a work dedicated to the medieval theologian William of Ockham. It too was to consist of a single fixture, before Flavin decided to extend the form to include three lighting segments.
In their verticality and the use of ‘cool white’ light, they prefigure the version of his ‘monument’ exhibited here. Apparently, Flavin discovered the Constructivist work of Vladimir Tatlin through Sol LeWitt, who at the beginning of their friendship in 1963 is said to have given Flavin’s wife Sonja a book on modern Russian art. The following year, Flavin put together a series of wall configurations with white fluorescent tubes that he would group under the generic title “monument” for V. Tatlin.
It would become one of Flavin’s most emblematic series, and he would continue working on it until 1990. He experimented with different variations, changing the size of the fixtures and the tubes, their order, configuration, and direction. Sometimes he made the arrangements symmetrical, sometimes not. But the geometric, abstract language of legibility and ‘indivisibility’ was always accentuated. In this, his works are not only representative of late- stage New York minimalism but also participate in a European tradition that in the end few US artists of his generation were comfortable with being seen as continuing. With his ‘monuments’, he included himself within a genealogy and a history of art which, unlike some of his contemporaries, he saw as a legacy he had inherited. Tatlin’s influence on Flavin’s ‘monuments’ as well as on his other works can be seen (separate to the political and utopian nature of the Russian artist’s undertaking) in the rejection of the frame, the use of the corners and angles made by the walls of the space of exhibition, and above all the need to ‘project’ the work into real space using non-traditional, industrial materials. ‘Real materials in a real space’, was the credo of Russian Constructivism. Flavin would make it his own.