David Zwirner presents an exhibition of works by American artist Dan Flavin at the gallery’s London location. Presented across two floors, the works on view recreate the artist’s momentous colored fluorescent light exhibitions, which took place at Leo Castelli Gallery and Galerie Heiner Friedrich in New York and Cologne in 1976, and figure as important early instances of his innovative use of immersive colour and serial progressions in response to architectural space. 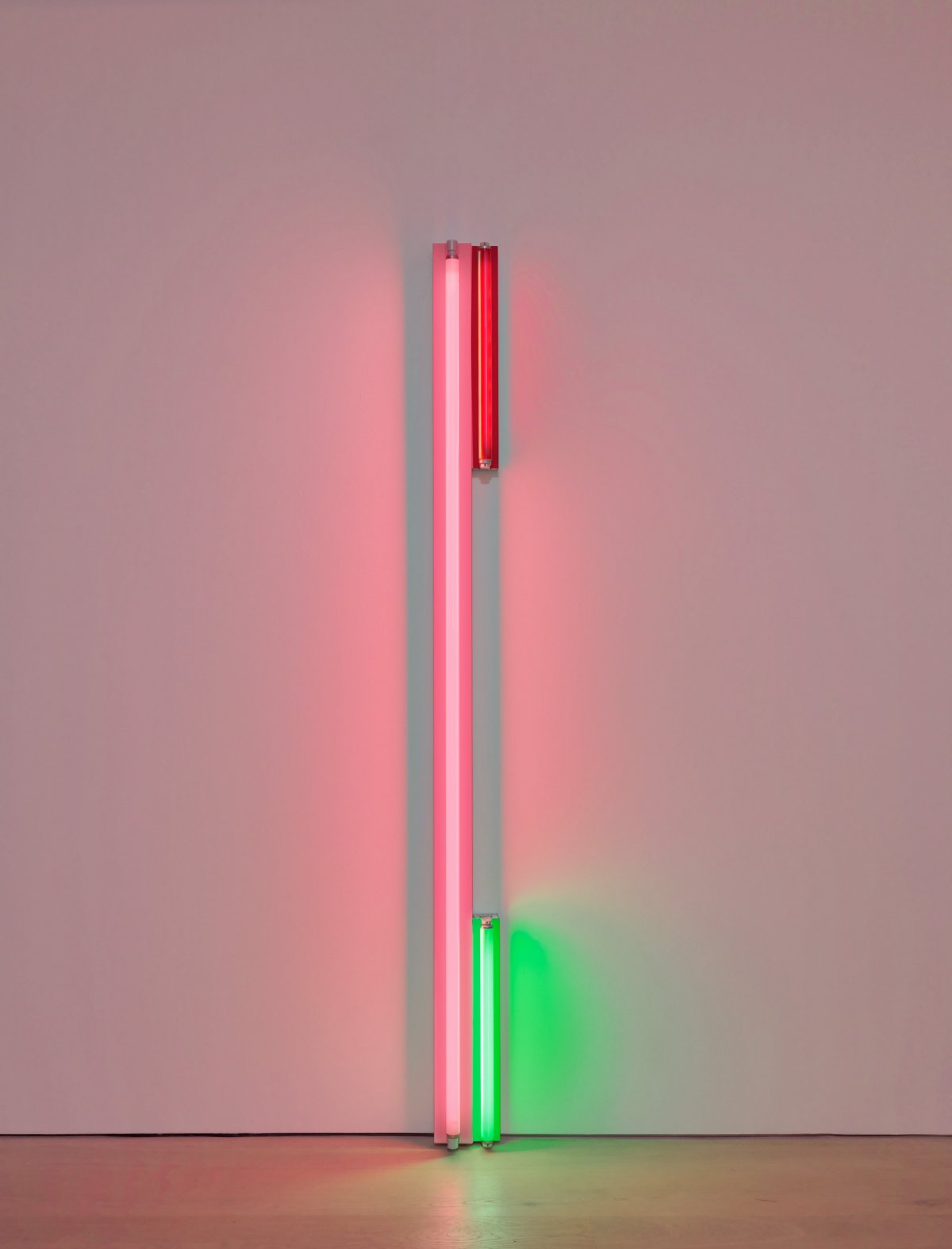 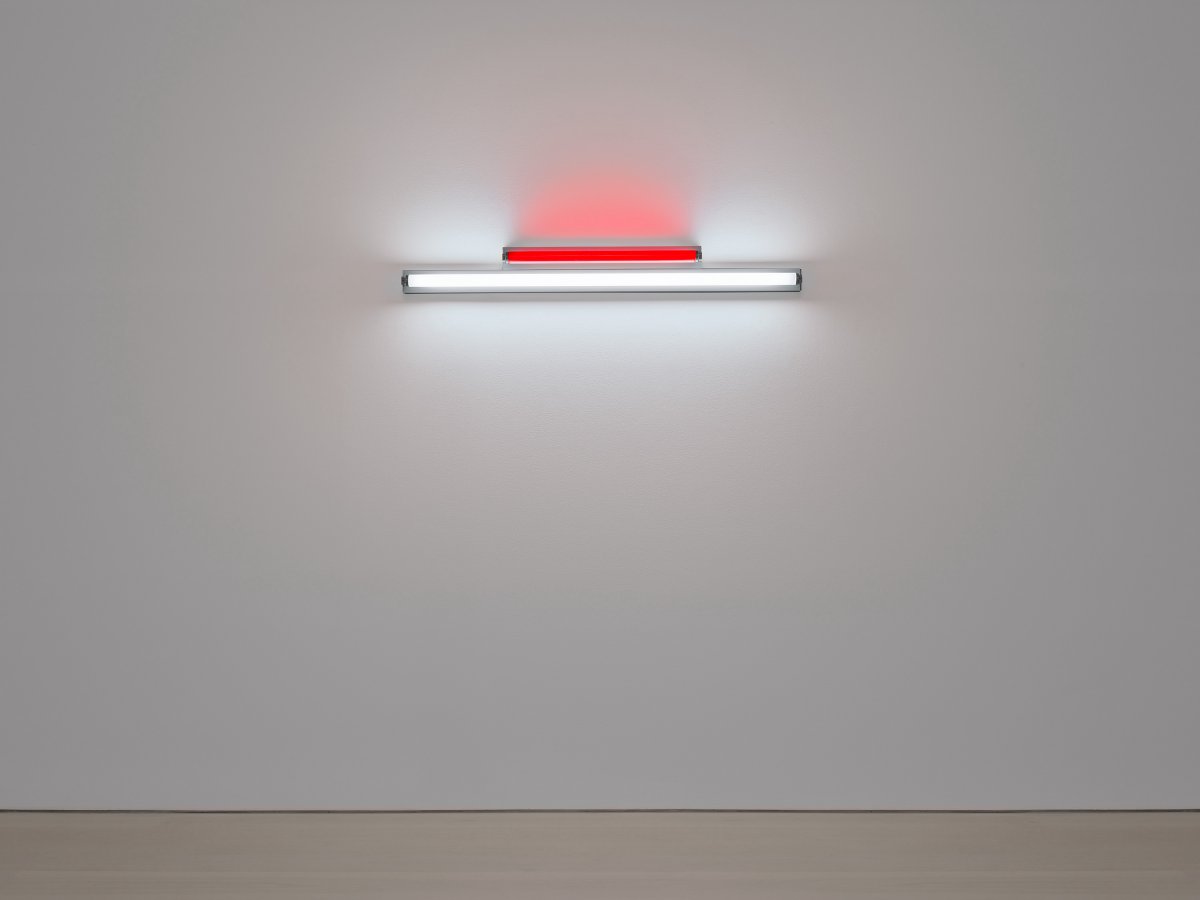 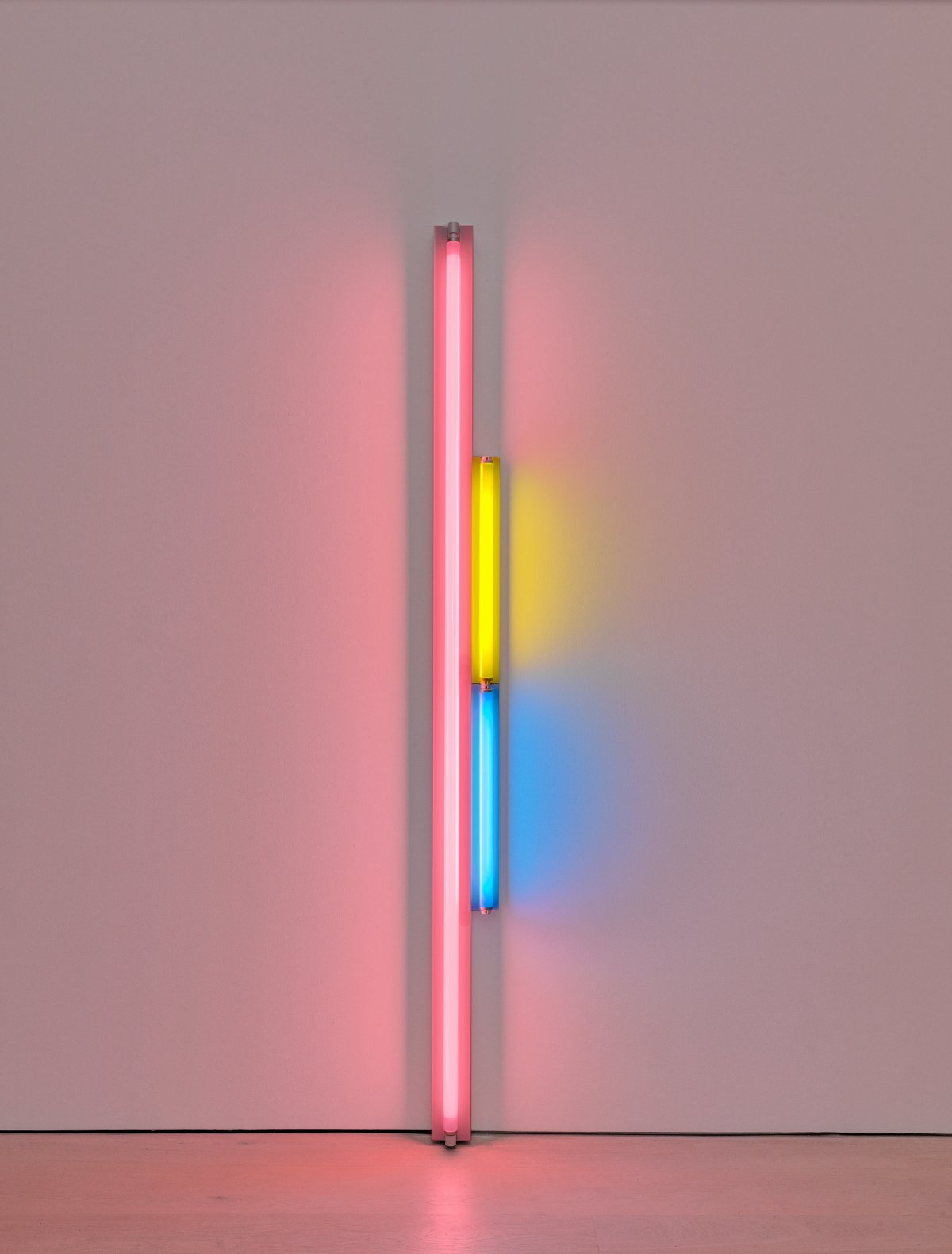 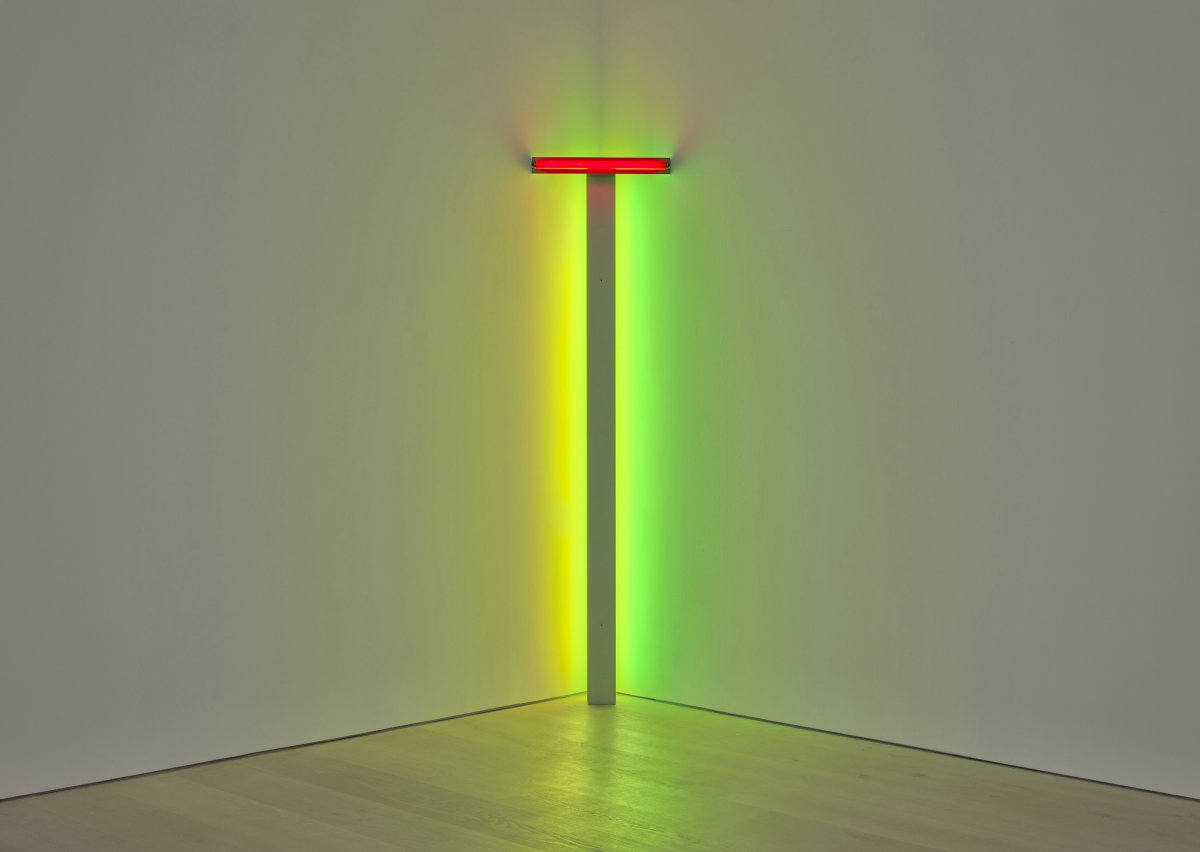 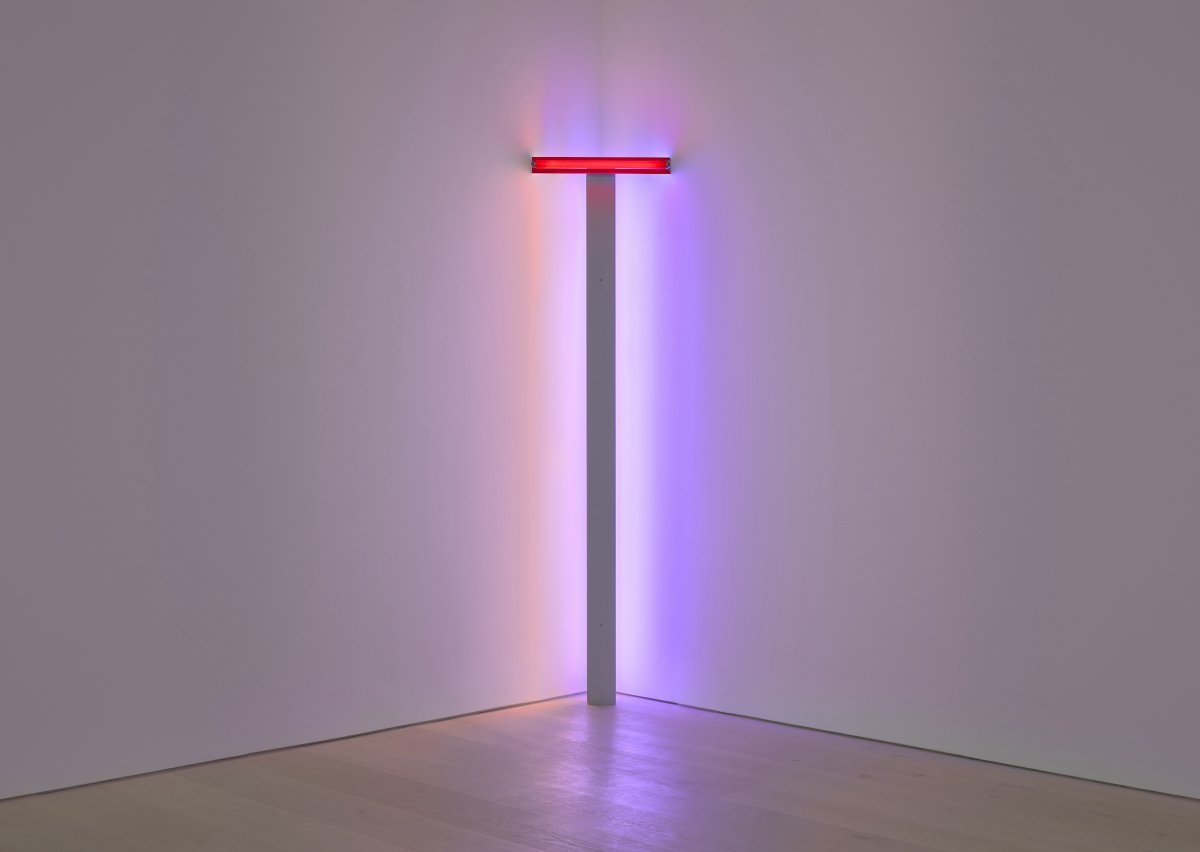 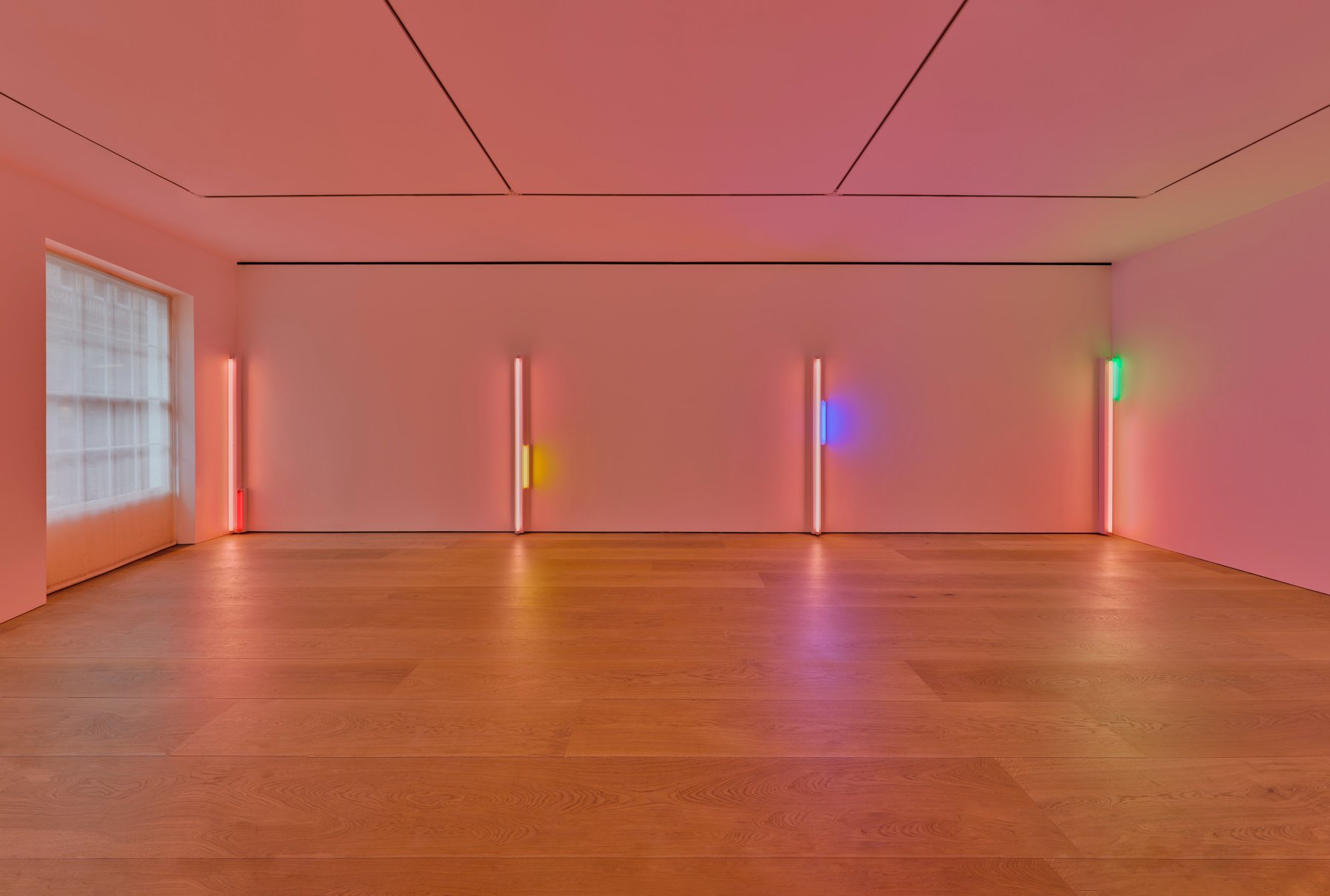 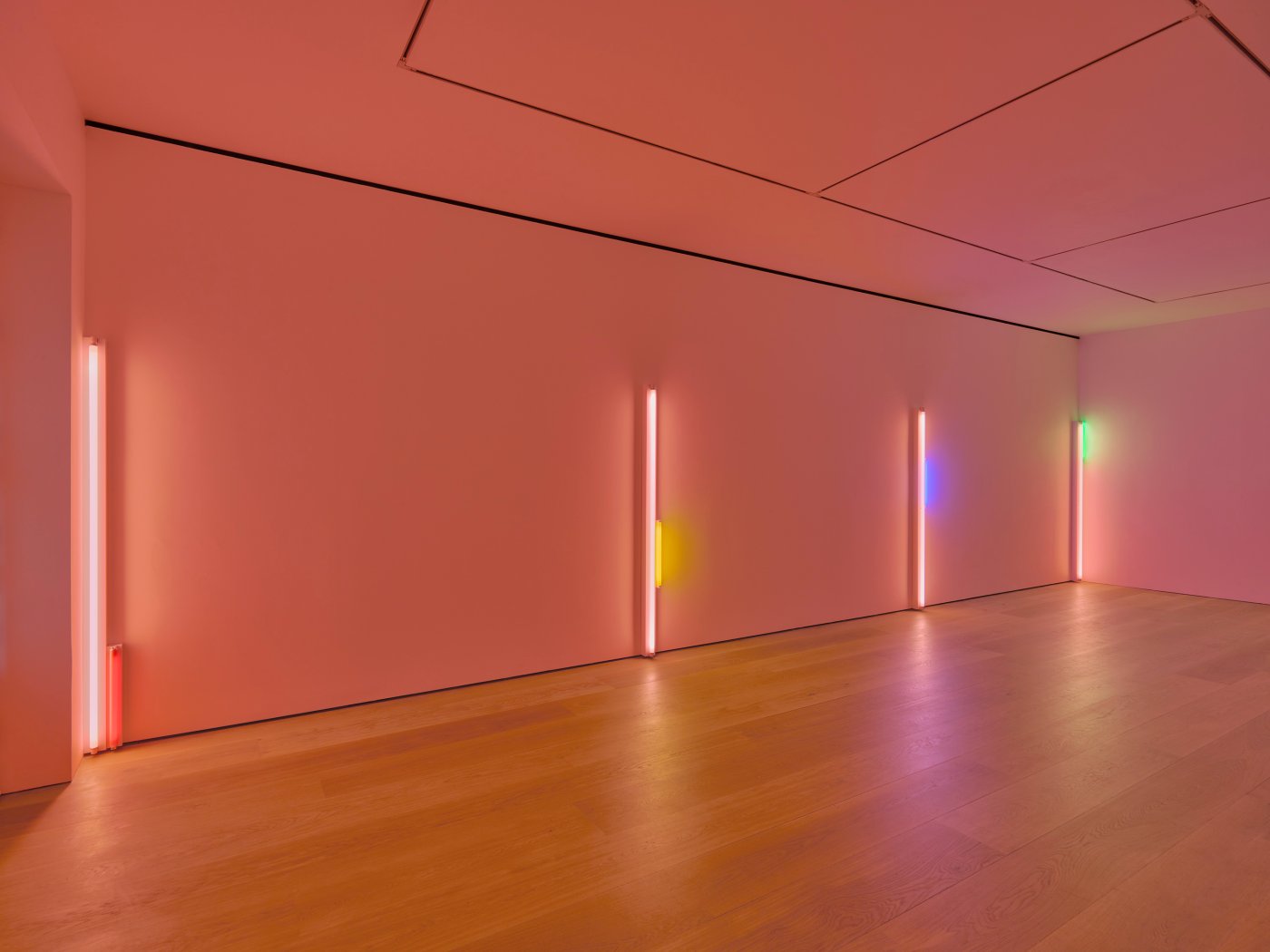 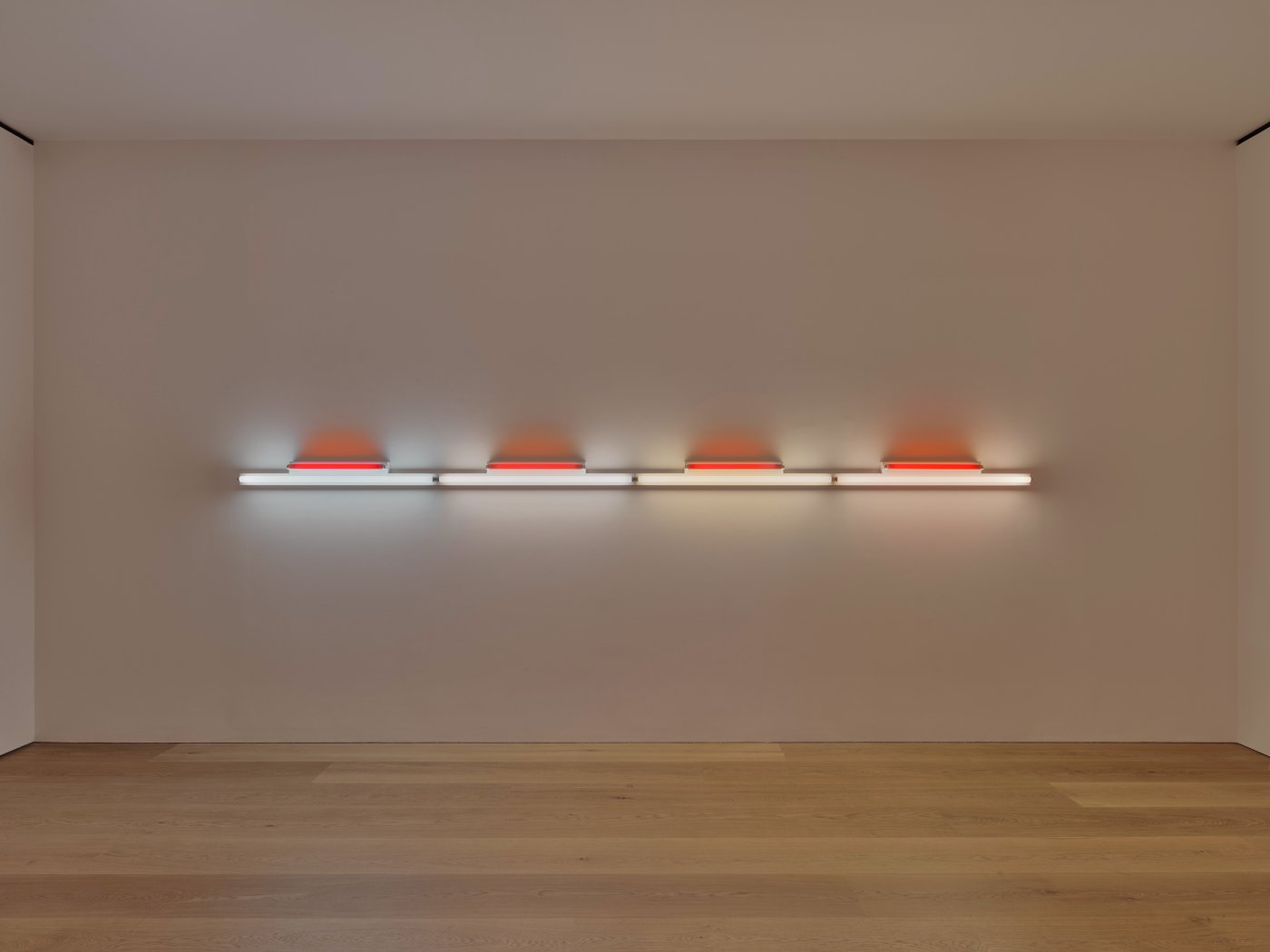 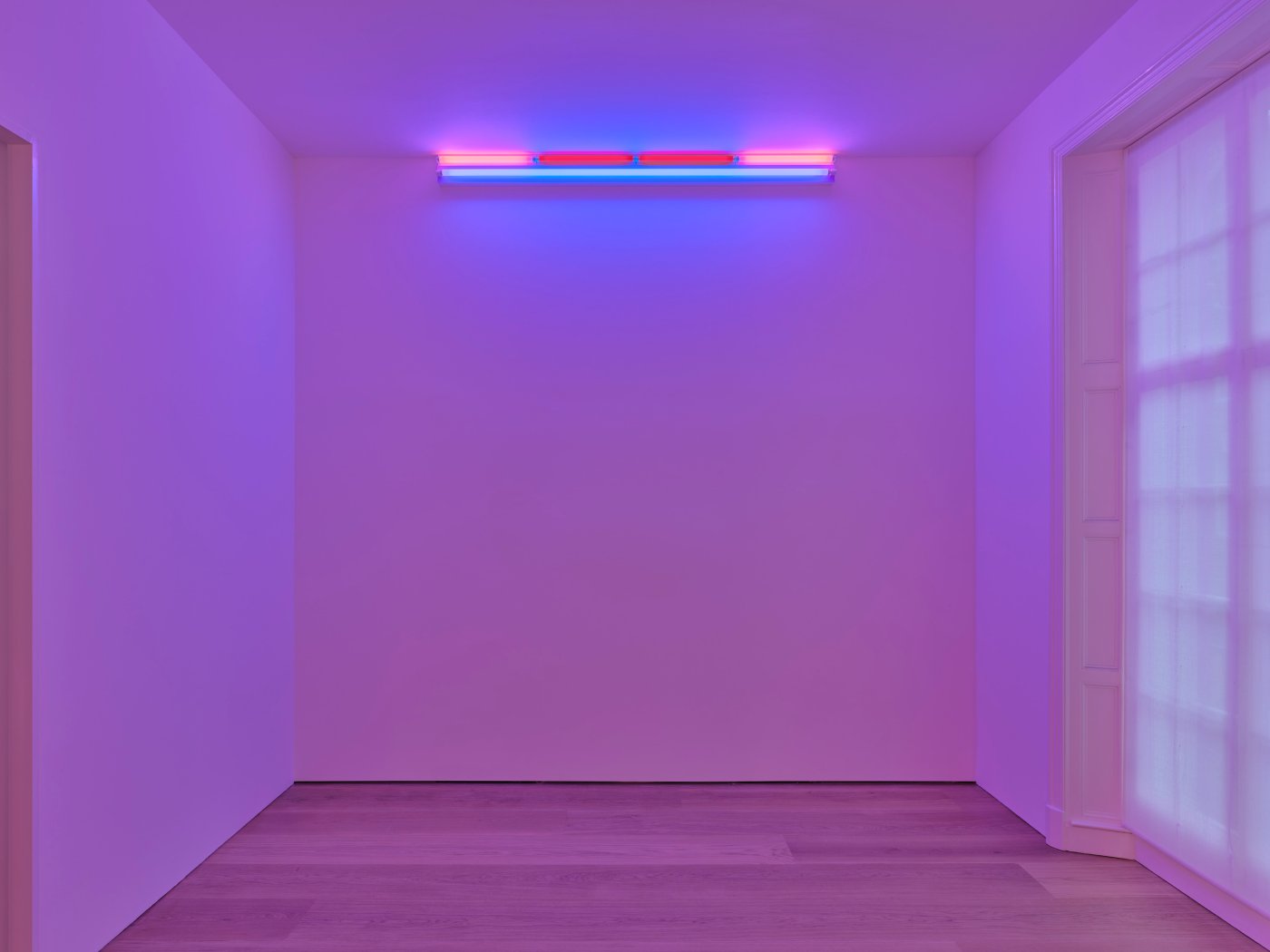 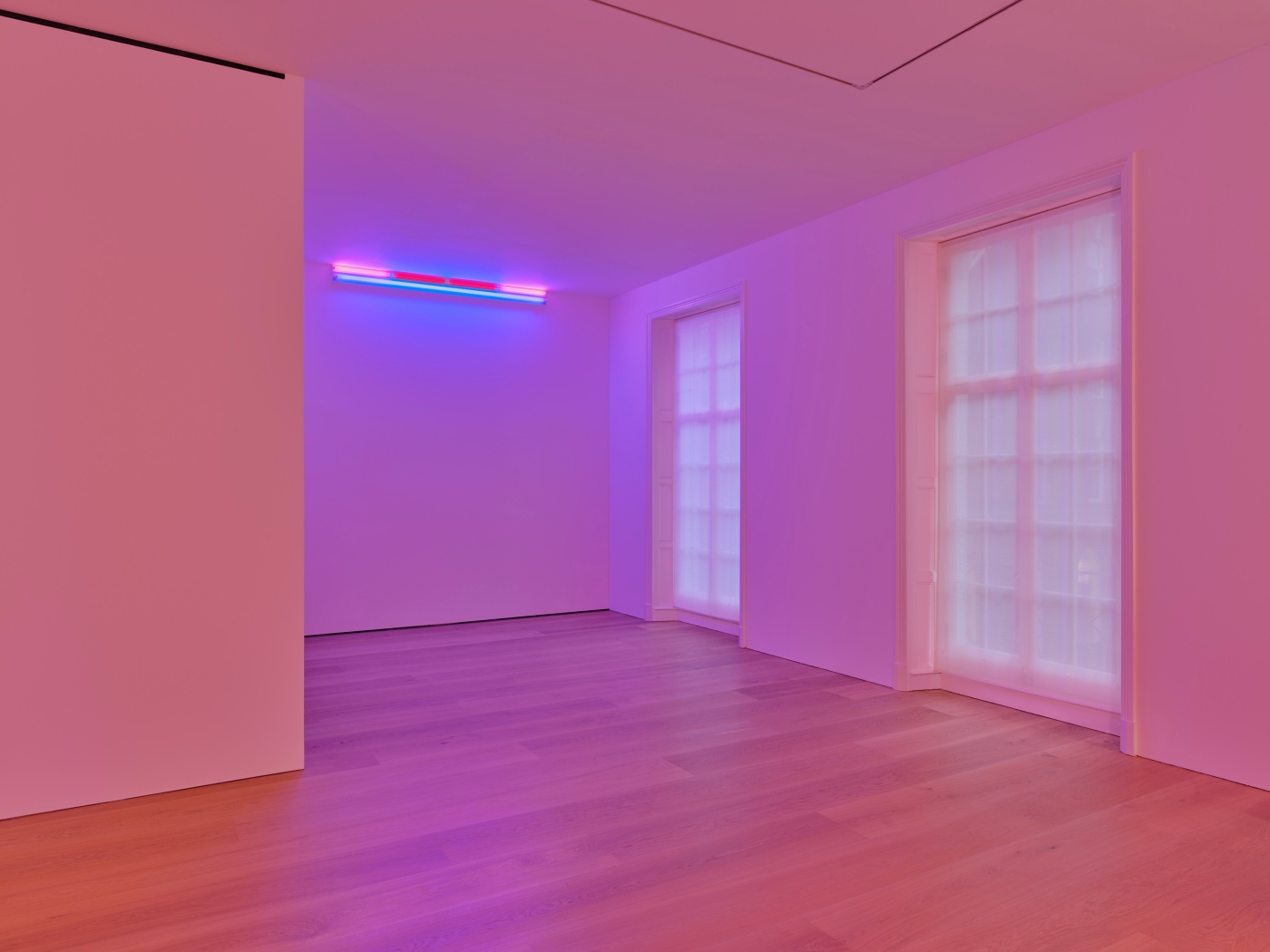 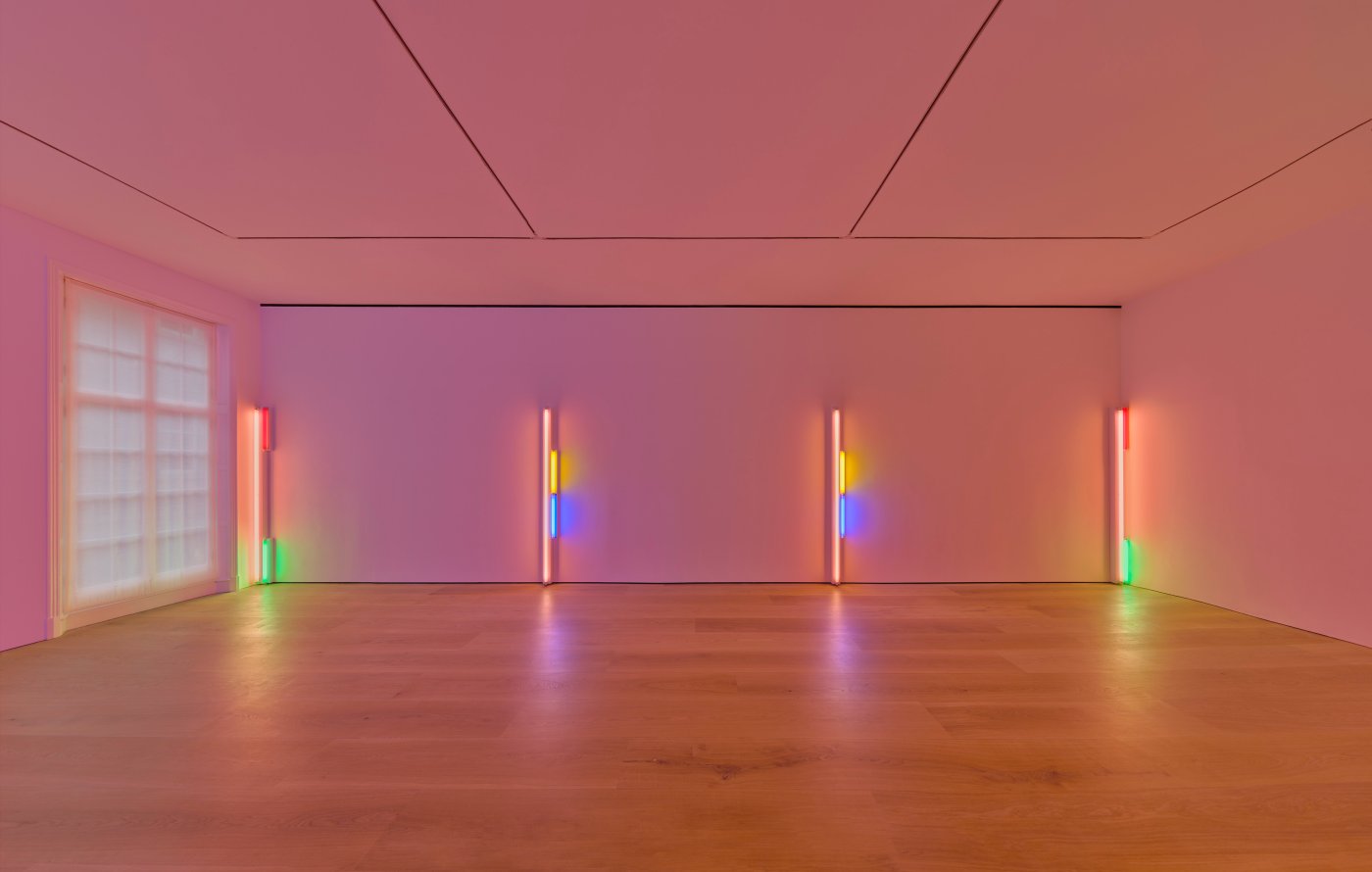 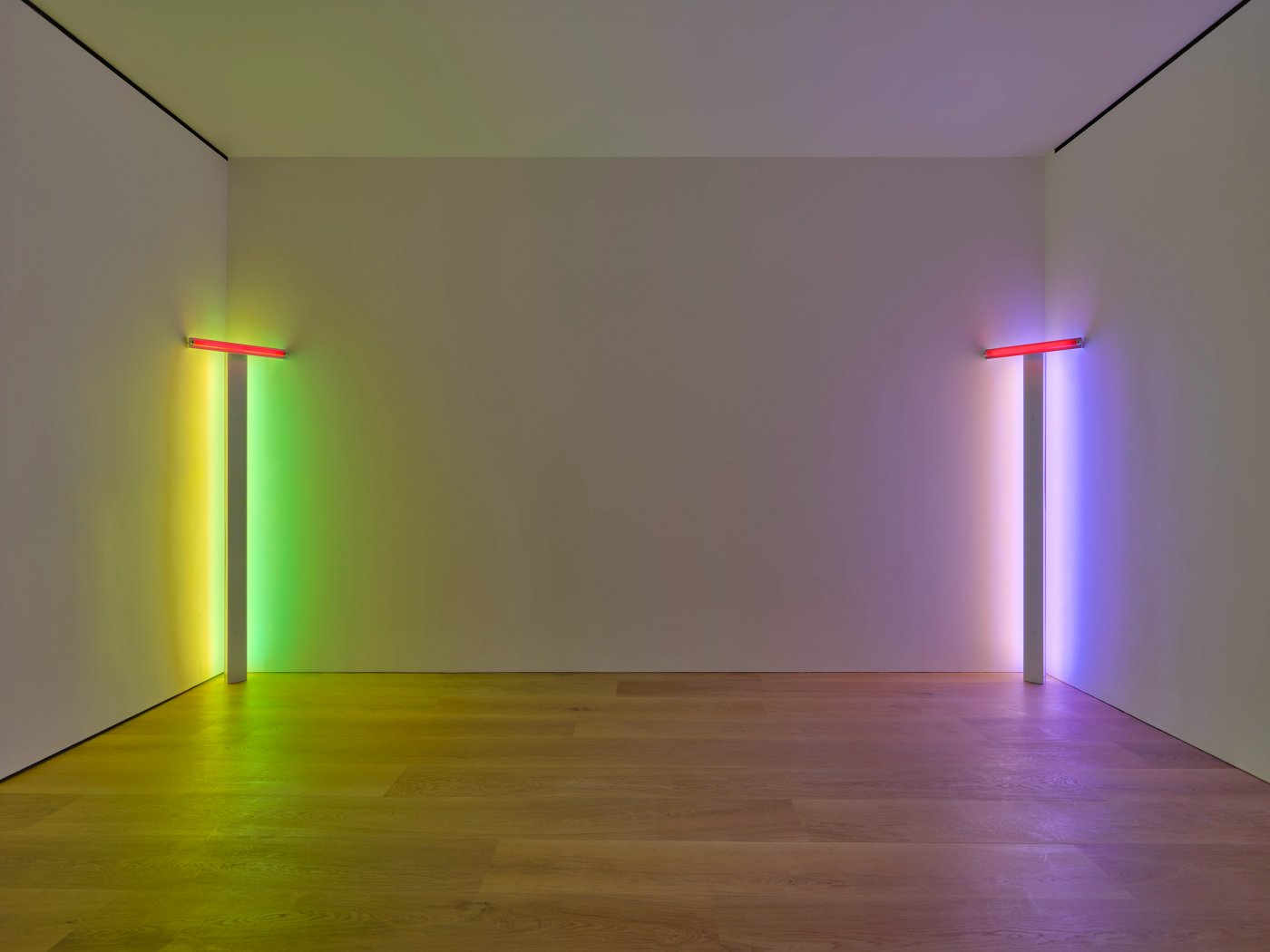 In bringing these works back together, the exhibition will provide a rare opportunity to directly experience the artist’s singular vision and ability to transform space through everyday materials. David Zwirner has represented the Estate of Dan Flavin since 2009, and this will be the gallery’s first presentation of the artist’s work in London.

From 1963, when he conceived the diagonal of May 25, 1963 (to Constantin Brancusi)—a single gold fluorescent lamp installed diagonally on a wall—until his death in 1996, Flavin produced a remarkably consistent and prodigious body of work that utilised commercially available fluorescent lamps to create installations (or “situations,” as he preferred to call them) of light and colour. Through these light constructions, Flavin was able to at once establish and redefine space. The artist’s work—which ranges in scale from individual wall-mounted and corner constructions to large-scale works, in which he employed whole rooms or corridors—testifies to his recurrent preoccupation with architecture.

Each of the nine colours that comprised the artist’s visual vocabulary during these years—red, pink, blue, green, yellow, cool white, daylight, warm white, and soft white—will be represented within the show (he later added ultraviolet light to his repertoire). As Marianne Stockebrand has noted, although he is not primarily known as a colourist, Flavin nevertheless “introduced a new aspect to visual art: the pouring, or flooding of color into space. By diffusing in all directions, the light creates a volume of color. Within this volume, however, color becomes visible only when it touches a reflecting plane, such as a wall, a floor, the ceiling, furniture or people. One cannot see the color flowing within a space, as it is not materialized. It is light—colorful light…. Color without boundaries, which Dan Flavin has made his tool in the creation of art.” (1)

The ground floor will feature two serial groupings devised by Flavin, each comprising four related works, that together give a sense of the vast possibilities conceptualised by the artist within the confines of this self-limited visual vocabulary. In the first gallery, the four vertically oriented works are spaced evenly across a single wall, each composed of, on the left, one eight-foot pink lamp, and on the right, one two-foot lamp in red, yellow, blue, or green that is positioned progressively higher as the viewer traverses the space. By contrast, in the next gallery, the four horizontally oriented works are presented end-to-end, clustered together tightly in the centre of the wall, each featuring a four-foot lamp of one of the varieties of white light, with a two-foot lamp of red light centred above.

The first floor will feature a group of works that highlight Flavin’s experimentations with installation in the early part of his career, including a rarely seen work that the artist specified should be hung at the top edge of the wall where it meets the ceiling, causing viewers to turn around to view the eight-foot-wide composition in pink, red, and blue light as they enter the space. Also presented will be two untitled (fondly, to “Phip”) works dedicated to Philippa de Menil, one of the founders of the Dia Art Foundation. In an unusual move, Flavin installed each work twice, creating a recursive installation of repetition and difference. Finally, two T-shaped compositions placed in opposite corners—a favoured format Flavin would go on to use throughout his career—highlight the architectural conditions of the space in which they are installed.

A concurrent exhibition, Dan Flavin: Kornblee Gallery 1967, will be on view at the gallery’s 34 East 69th Street location in New York.

Dan Flavin’s (1933–1996) first solo exhibitions were held at the Judson Gallery in 1961 and the Green Gallery in 1964, both in New York. His first European exhibition was in 1966 at Galerie Rudolf Zwirner in Cologne, Germany; and in 1969, the National Gallery of Canada, Ottawa, organised his first major museum retrospective. His work was included in a number of key early exhibitions of Minimal art in the 1960s, among them Black, White, and Gray (Wadsworth Atheneum Museum of Art, Hartford, Connecticut, 1964); Primary Structures (The Jewish Museum, New York, 1966); and Minimal Art (Gemeentemuseum, The Hague, 1968). Flavin’s work would continue to be presented internationally over the course of the pursuant decades at venues including the St. Louis Art Museum, Missouri (1973); Kunsthalle Basel (1975); Museum Boymans-van Beuningen, Rotterdam (1975); Stedelijk Museum, Amsterdam (1986); and the Solomon R. Guggenheim Museum, New York (1992), among others.

A major museum retrospective devoted to Flavin’s work was organised, in cooperation with the Estate of Dan Flavin, by the Dia Art Foundation in association with the National Gallery of Art, Washington, DC, where it was first on view in 2004. The exhibition travelled from 2005 through 2007 to the Modern Art Museum of Fort Worth, Texas; Museum of Contemporary Art, Chicago; Hayward Gallery, London; Musée d’Art Moderne de la Ville de Paris; Bayerische Staatsgemäldesammlungen, Pinakothek der Moderne, Munich; and the Los Angeles County Museum of Art. Flavin’s work was the subject of a solo exhibition at the Pulitzer Foundation for the Arts in St. Louis, Missouri, in 2008. In 2012, the Morgan Library and Museum, New York, presented a retrospective of the artist’s drawings; from 2012 to 2013, a retrospective of his work travelled from the Museum Moderner Kunst Stiftung Ludwig, Vienna, to the Kunstmuseum St. Gallen, Switzerland. From 2013 to 2014, Artist Rooms: Dan Flavin travelled from Tate Modern, London, to Gracefield Arts Centre, Dumfries, Scotland. From 2019 to 2020, the Institute of Contemporary Art, Miami presented a focused exhibition of the artist’s works from the mid-1960s. In 2022, Collection Lambert in Avignon, France, presented the solo exhibition, Dan Flavin: Epiphany.

Exhibitions with David Zwirner include Dan Flavin: The 1964 Green Gallery Exhibition, a critically lauded recreation of an early, seminal show of Flavin’s light works, in 2008, and Dan Flavin: Series and Progressions, which spanned the gallery’s West 19th Street spaces in New York, in 2009. At its West 20th Street gallery, David Zwirner presented a series of works from 1966 to 1971 in 2013; followed by Dan Flavin: Corners, Barriers and Corridors, featuring significant works from the late 1960s and early 1970s, in 2015; and Dan Flavin: in daylight or cool white, examining Flavin’s use of different variations of fluorescent white light, in 2018. A solo exhibition of the artist’s work was on view at the gallery’s Paris location in 2019–2020. Spanning three decades of his career, this was the first major presentation of Flavin’s work in the French capital since his 2006 retrospective at the Musée d’Art Moderne de la Ville de Paris.