I’m interested in the fragility of the moment. When painting, each brushstroke is an opportunity to consider and preserve that moment. Each mark is a decision, from the moment the brush collides with the canvas, and each one can go in so many different directions.
—Dan Colen 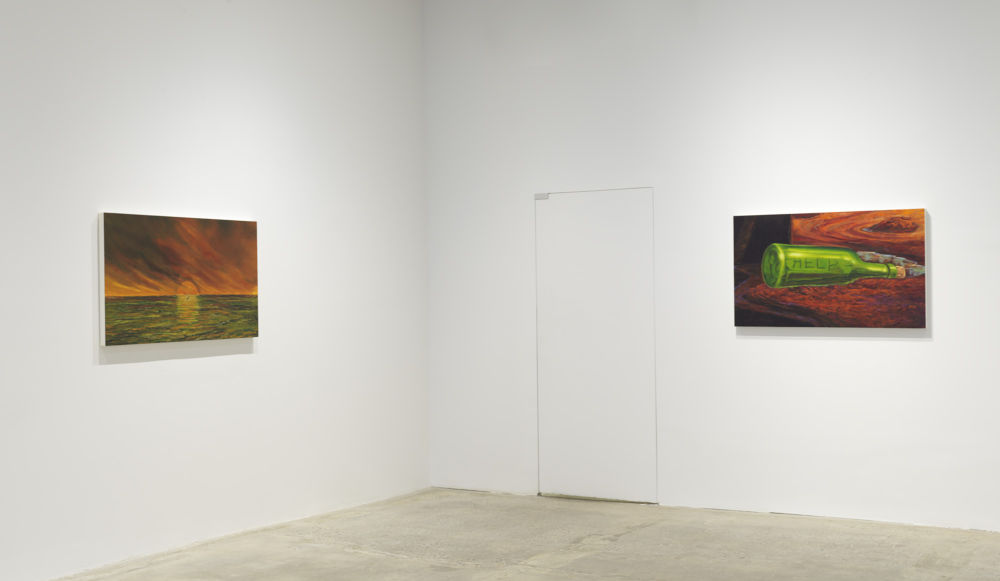 Moving between diverse styles and subjects, Colen investigates the conceptual stakes of materiality and mark making. In his earliest paintings, elements of the supernatural intrude into naturalistic renderings of interior spaces, while his more recent canvases explore the technical, physical, and thematic limits of the medium itself. Colen has often worked with unconventional materials such as chewing gum, soil, and trash, relinquishing control of his work’s final appearance to their unpredictable surfaces. Nevertheless, representational imagery has remained a through line across his oeuvre, allowing him to conduct an ever-evolving inquiry into the objecthood and authority of painting as a medium.

In the seven new canvases on display in HELP, Colen uses the motif of the message in a bottle—bobbing on an open sea or washed up on a distant shore—to stage the practice of painting as an act of faith, and as a tool for communication with the unknown. The note enclosed in the sealed glass container has traditionally functioned as a distress signal or last-ditch message from a desperate or doomed sailor. These works represent the final entries in Colen’s cycle of “Disney paintings,” which derive their imagery from animated films made by the famous studio.

Beginning in 2003 with his Candle paintings, Colen has used Disney’s imagery and aesthetic to suggest the presence of the fantastical and the miraculous. Based on imagery from Pinocchio (1940), these works depict the woodcarver Geppetto’s table. But in a humorous subversion of Disney’s wholesome ethic, the smoke drifting up from a just-extinguished candle spells out a succession of obscenities. The later Miracle series (2010–18) uses imagery from Fantasia (1940), while the Mother paintings (2008–19), draw on Lady and the Tramp (1955).

In HELP, Colen looks to the fantasy drama The Rescuers (1977). Here he renders ocean and horizon in bright primary colors, retaining the hard graphic outlines characteristic of the cartoon form while still infusing the paintings’ ripples and waves with a sense of movement. In places, his expressive brushstrokes evoke the softness and freedom of watercolor as much as the relative fixity of oils. Among Colen’s most atmospheric works to date, these haunting compositions evoke oceanic loneliness, purposefully drawing upon familiar imagery to suggest a confrontation or conversation with the sublime.