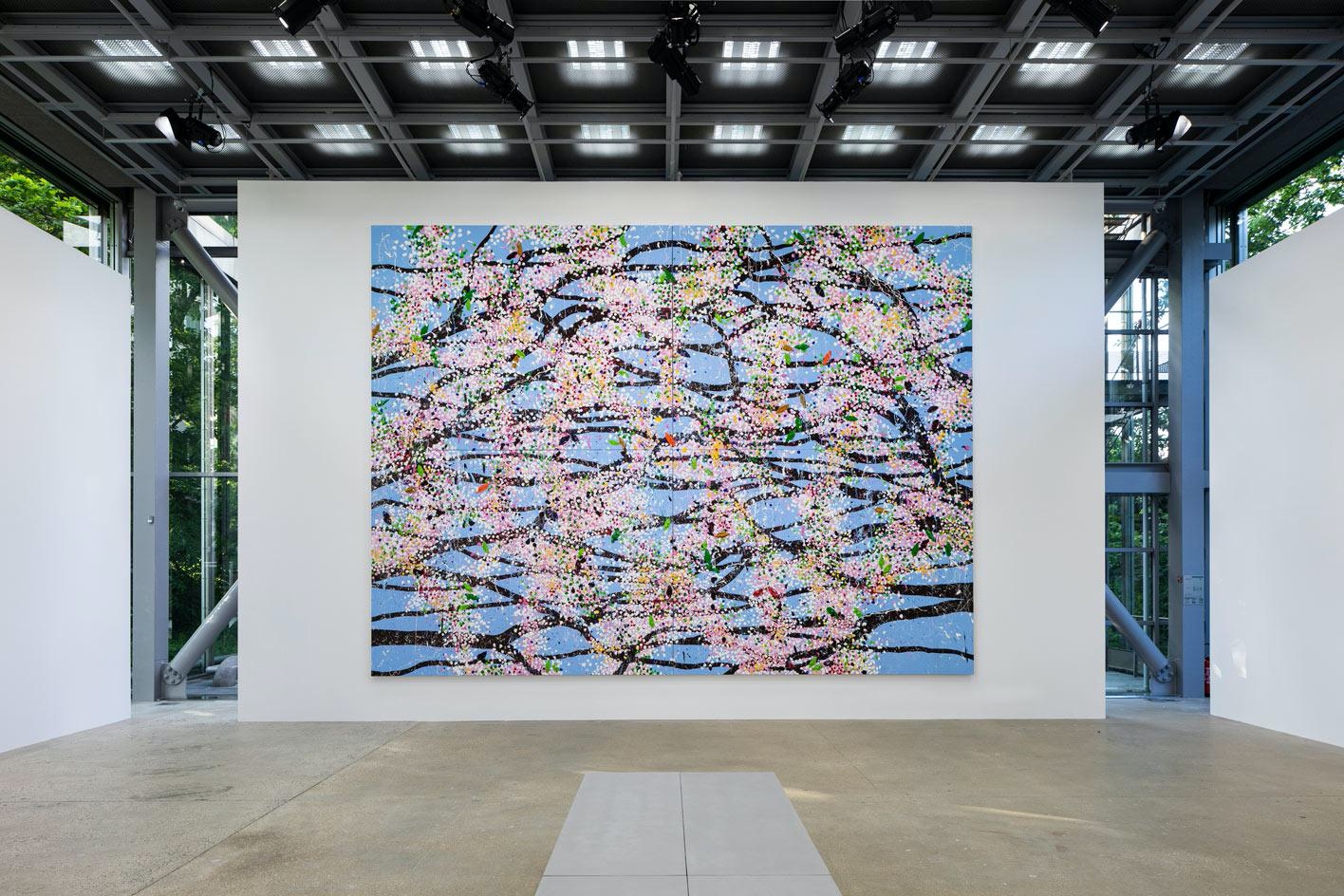 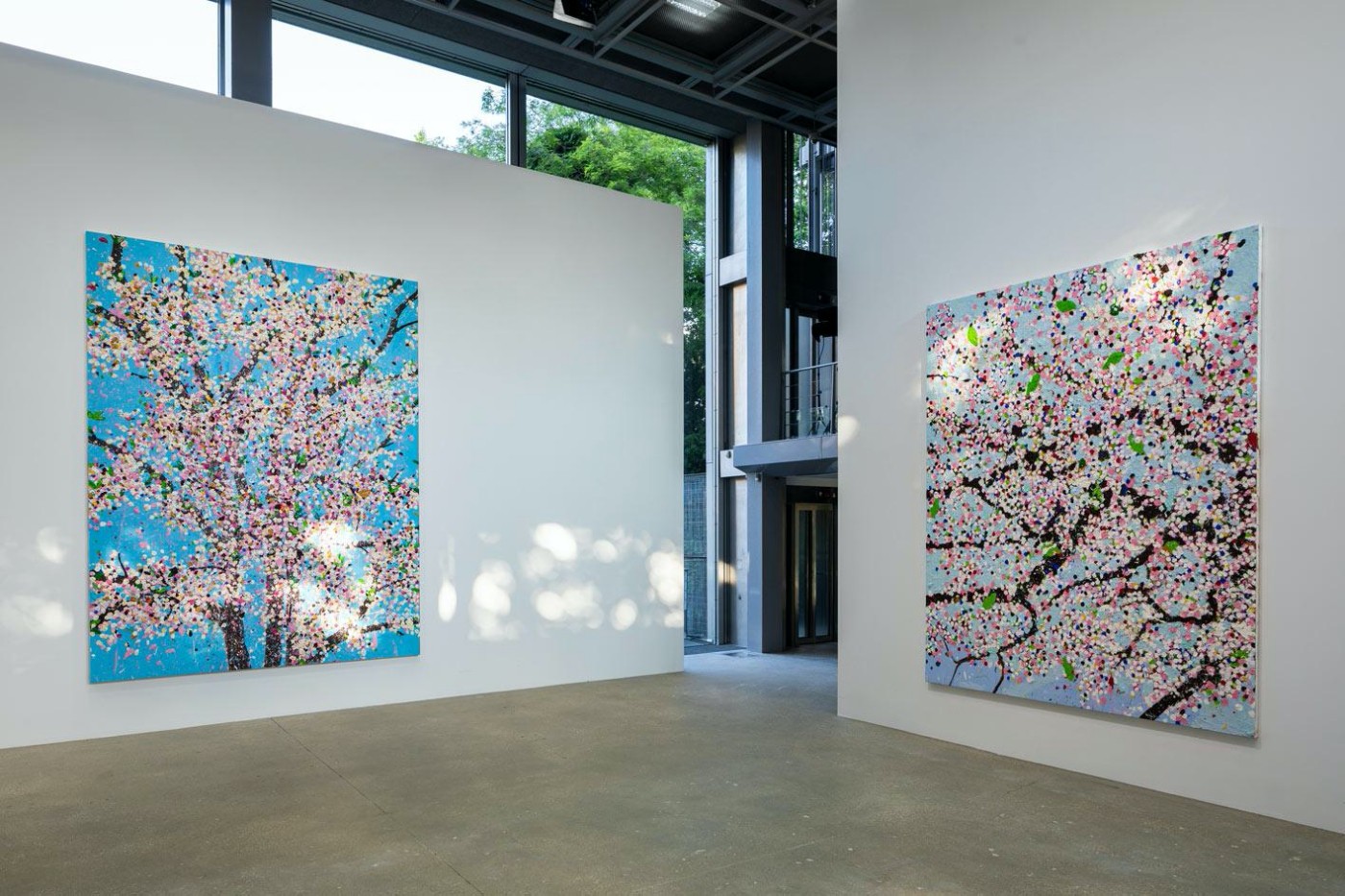 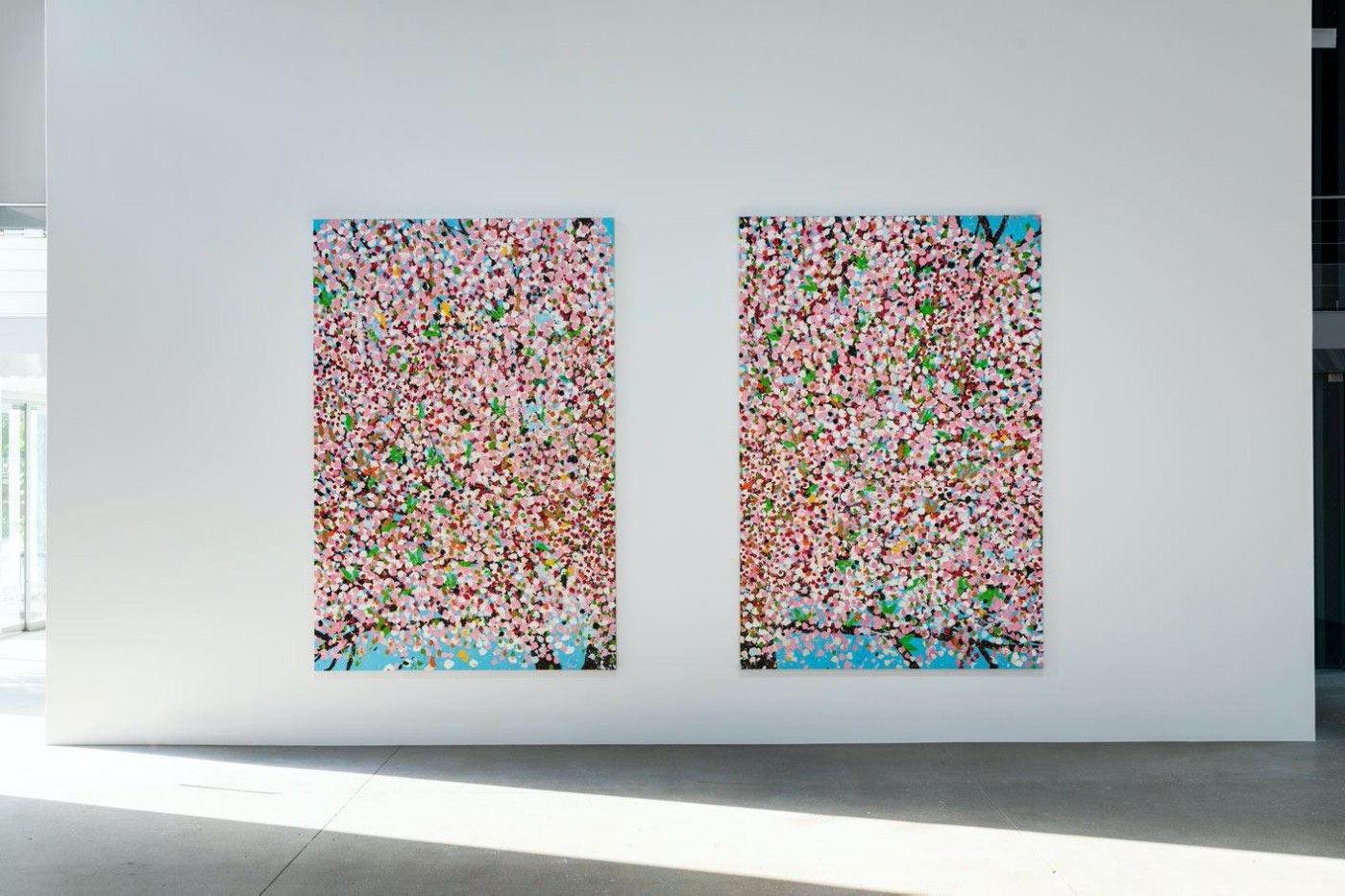 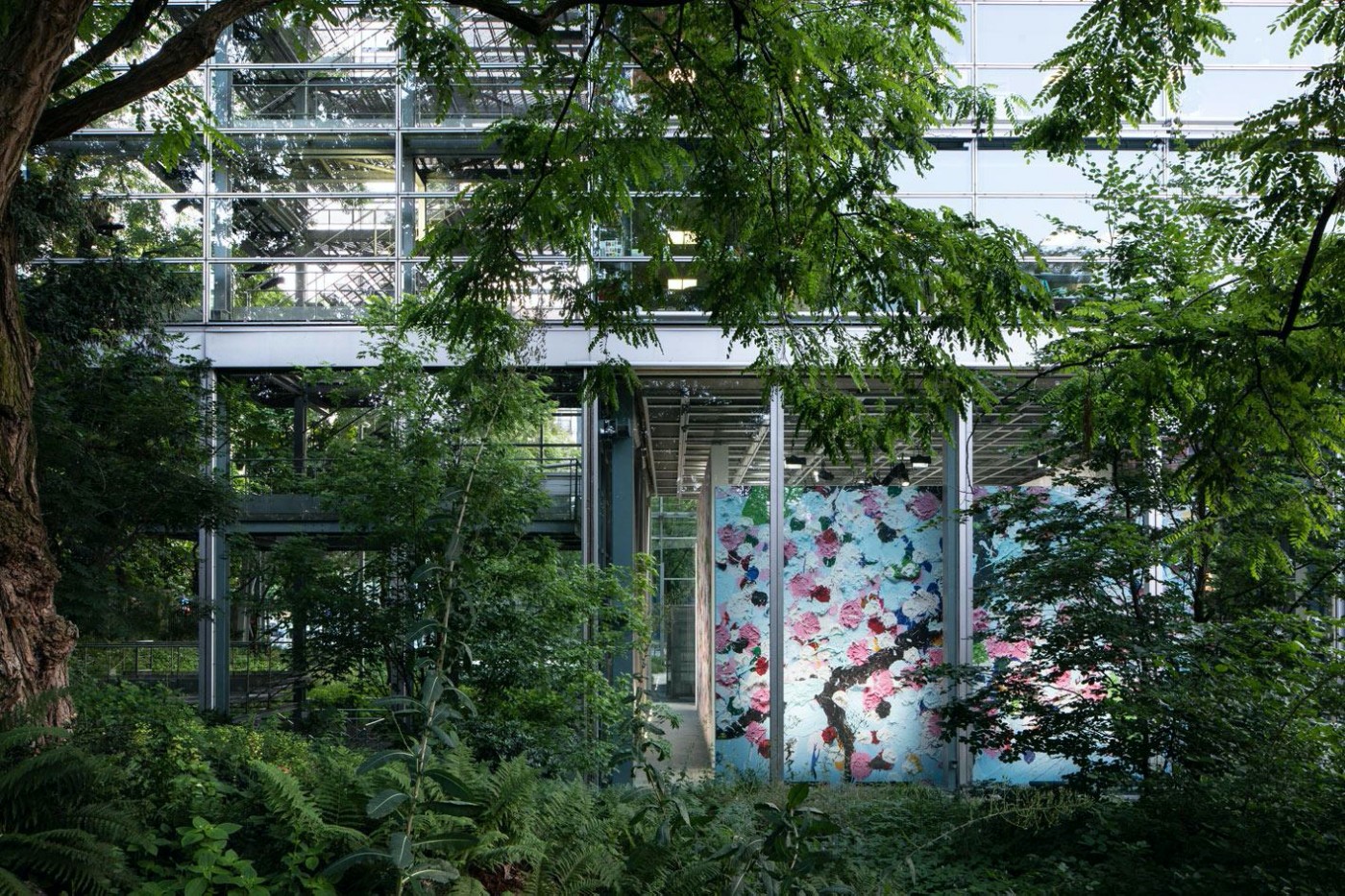 The Cherry Blossoms are about beauty and life and death. They’re extreme — there’s something almost tacky about them. (…) They’re decorative but taken from nature. (…) They’re garish and messy and fragile and about me moving away from Minimalism and the idea of an imaginary mechanical painter and that’s so exciting for me.
Damien Hirst

A celebration of colour within chaos
Cherry Blossoms is Damien Hirst’s first museum exhibition in France. The Cherry Blossoms series reinterprets, with playful irony, the traditional subject of landscape painting. Hirst combines thick brushstrokes and elements of gestural painting, referencing both Impressionism and Pointillism, as well as Action Painting.
The monumental canvases, which are entirely covered in dense bright colours, envelope the viewer in a vast floral landscape moving between figuration and abstraction.
The Cherry Blossoms are at once a subversion and homage to the great artistic movements of the late nineteenth and twentieth centuries. They are integral to the pictorial exploration long carried out by Hirst.

In his London studio, the artist describes “diving into the paintings and completely blitzing them from one end to the other”.

He also talks about working on several canvases at the same time and constantly returning to these, which he kept close by, months after their completion. After devoting three full years to the series, Damien Hirst finished the Cherry Blossoms series in November 2020 : “[The pandemic] has given me a lot more time to live with the paintings, and look at them, and make absolutely certain that everything’s finished.” The complete series comprises 107 canvases (all reproduced in the exhibition catalogue), divided into single panels, diptychs, triptychs, quadriptychs and even a hexaptych, all large-format.

The exhibition, a response to an invitation by Hervé Chandès, General Director of the Fondation Cartier, to Damien Hirst during a meeting in London in 2019, presents thirty paintings selected by Hervé Chandès and the artist. Taking over the space designed by Jean Nouvel, the canvases, covered in thick, vibrant paint, absorb the spectator into the paintings.

From the Young British Artists to Cherry Blossoms
After studying in Leeds, Damien Hirst entered Goldsmiths College in London in 1986 and quickly became the face of the Young British Artists, a group with a taste for experimentation and creating art viewed as provocative by some. They dominated the British arts scene in the 1990s. Hirst’s Natural History series — in which animals appear in formaldehydefilled tanks — soon became emblematic of his work.

However, painting has always played an essential role in Hirst’s work: “I’ve had a romance with painting all my life, even if I avoided it. As a young artist, you react to the context, your situation. In the 1980s, painting wasn’t really the way to go.”

If his early canvases were inspired by Abstract Expressionism, which he refers to as a “paint how you feel” approach, in 1986 he began a series known as Spot Paintings, where coloured dots, which appear to have been painted by a machine, erase all traces of human intervention. Initially conceived as an ongoing series, today, the Spot Paintings include over one thousand canvases of varying sizes and titles. In contrast with the mathematical infinity of the Spot Paintings, the Visual Candy paintings (1993-1995), ironically named after a scathing comment by an art critic who said the paintings looked like curtain designs, are characterized by their thick smudges of paint and exuberant superimposed colours.

More recently, the series known as Colour Space (2016), a variation around the infinite possibility of colour, and Veil Paintings (2018), where dabs of paint shimmer and cover the entire canvas, celebrate the painting surface, depth and color. This exploration culminates in the Cherry Blossoms.

The Cherry Blossoms are about beauty and life and death. They’re extreme—there’s something almost tacky about them. Like Jackson Pollock twisted by love. They’re decorative but taken from nature. They’re about desire and how we process the things around us and what we turn them into, but also about the insane visual transience of beauty—a tree in full crazy blossom against a clear sky. It’s been so good to make them, to be completely lost in color and in paint in my studio. They’re garish and messy and fragile and about me moving away from Minimalism and the idea of an imaginary mechanical painter and that’s so exciting for me.
– Damien Hirst

Damien Hirst
Born in Bristol (UK) in 1965, Damien Hirst grew up in Leeds before moving to London in 1984, where he still lives today. In 1988, while studying at Goldsmiths College, he organised the exhibition Freeze, presenting his works alongside those of other students. The exhibition launched his career, as well as that of numerous other emerging artists and marked the genesis of the Young British Artists.

In 1995, he was awarded the Turner Prize. Working across sculpture, installation, painting and drawing, Damien Hirst explores themes connected to life and death, excess and fragility. An internationally renowned artist, his work has been exhibited at the Tate Modern in London as part of a large retrospective (Damien Hirst, 2012) and at the Palazzo Grassi and Punta della Dogana in Venice (Treasures from the Wreck of the Unbelievable, 2017).