Special events:
*Niyaz Najafov hosts a workshop in his Paris studio. Thursday 25 March
*Adam de Boer conducts a Batik workshop delving into his Eurasian ancestry and traditions from the region. Thursday 1 April
*Max Prus screens an exclusive film with a backing track of self-made music where he returns to the seaside areas of Norfolk seen in his 2020-2021 works. Thursday 8 April
*Khaleb Brooks performs a piece on identity at the Dover Street gallery where guests can watch from the outside in. Thursday 15 April
All on Instagram Live. Follow the gallery to access these events

Months spent itching to get out and pulling at the curtain seams? ‘Curtain Twitching’ appeals to lockdown sensibilities, of looking from the inside out and of intrigue into the lives of others as ours became suddenly narrower. The exhibition presents four different global perspectives from artists; Max Prus, Adam de Boer, Niyaz Najafov and Khaleb Brooks. ‘Curtain Twitching’ explores the divergent backgrounds of the artists and their worlds, visions and points of enquiries. 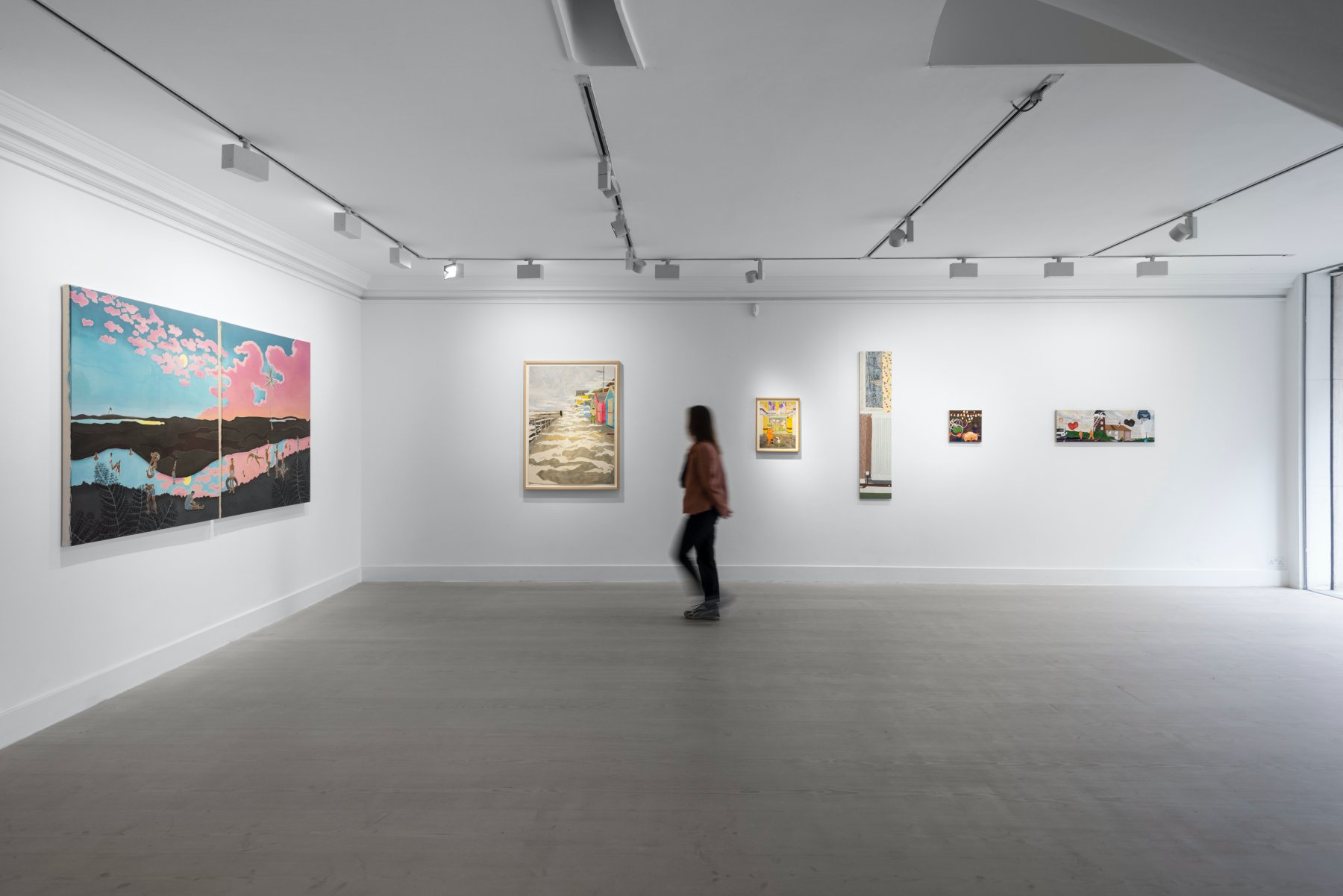 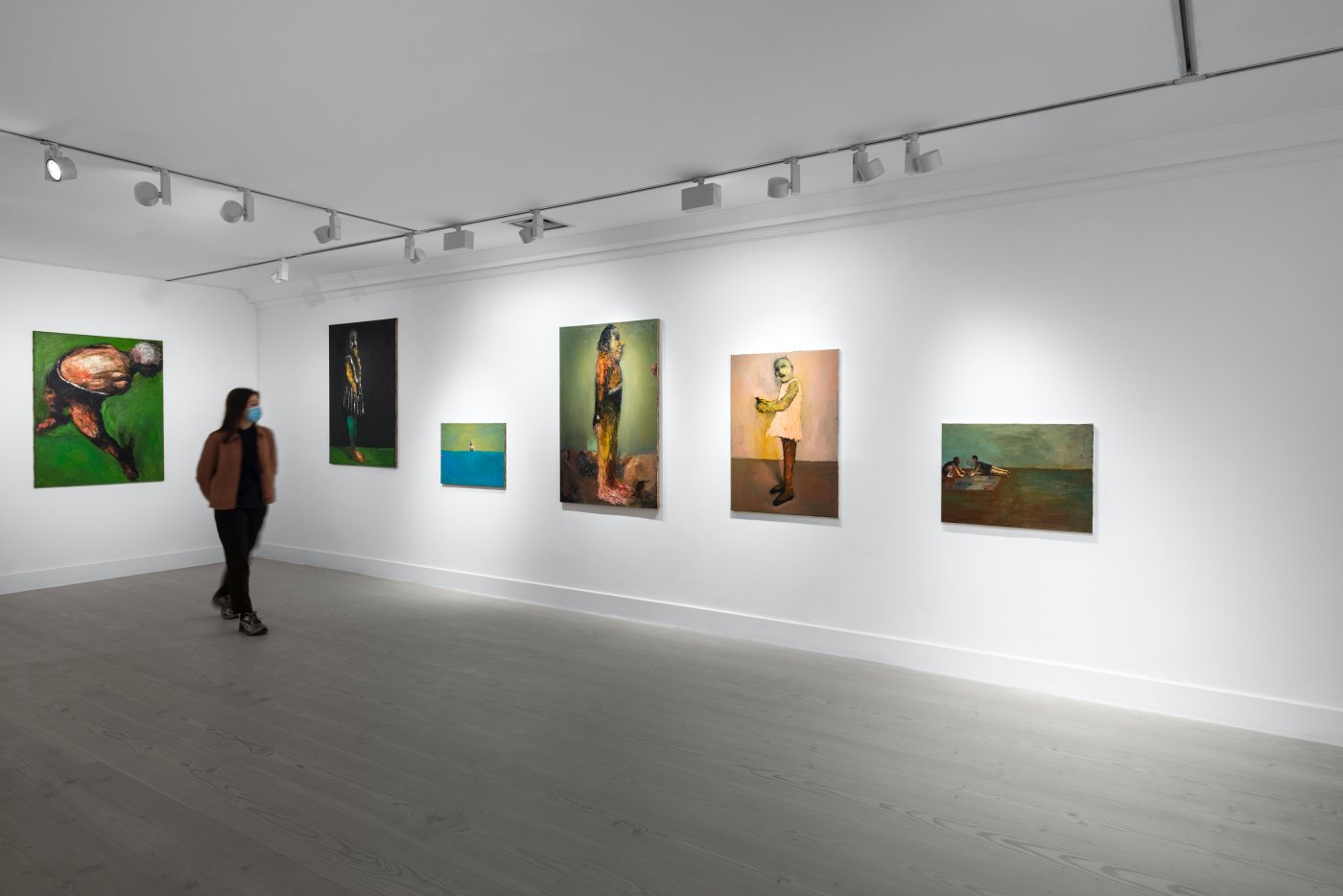 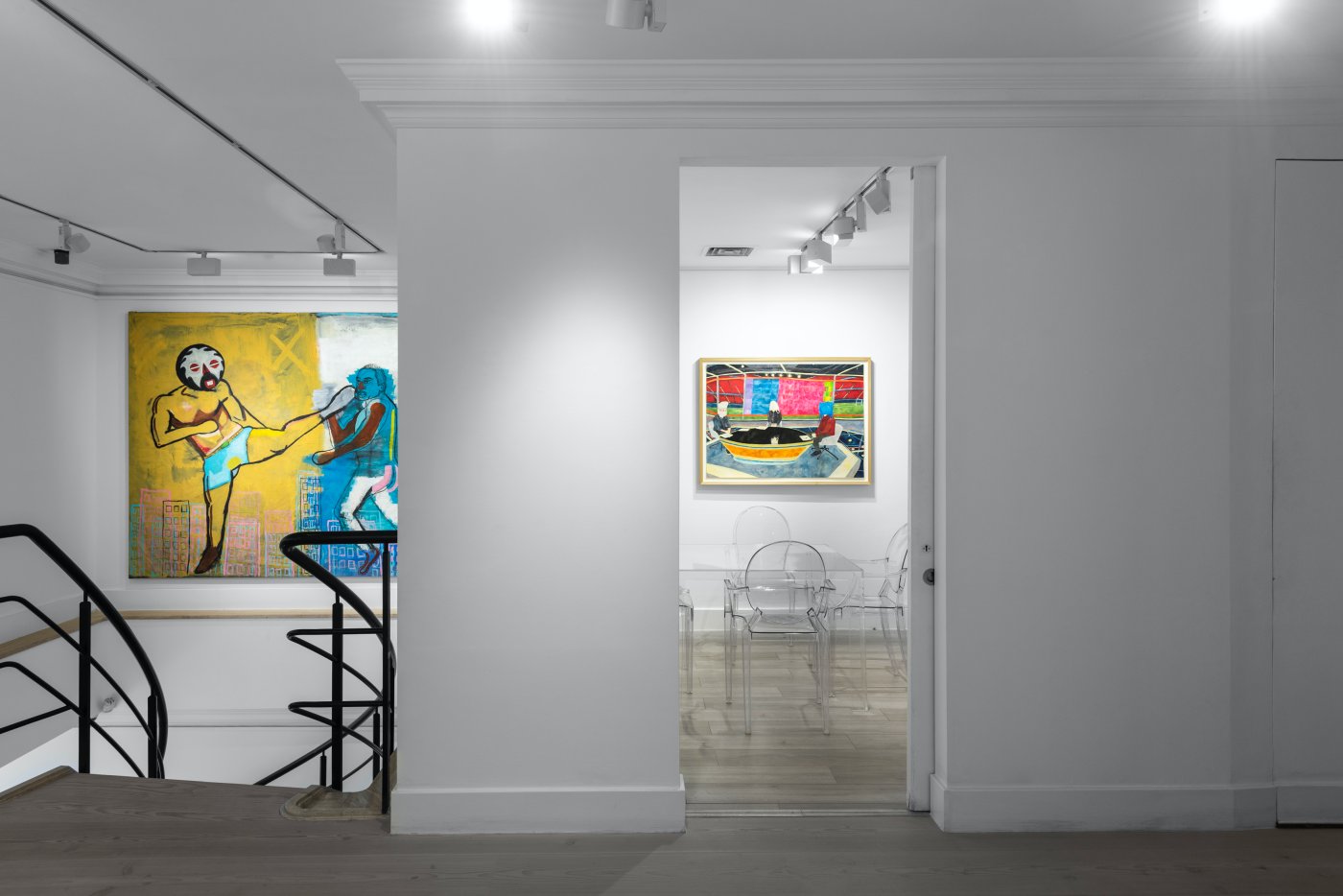 Max Prus is an artist based in Norfolk, his works depict scenes of everyday life from his immediate surroundings. The artist boldly captures non-narrative visuals, adding intrigue to the mundane. For example, Net Lurk, 2020, from which the title of the exhibition originates draws the viewer into a domestic setting and encourages questions such as who is the lurker? What are they observing from behind their net curtain? Disturbance on Dover Street, 2020 has a similar effect, the mustard hued armchairs and wooden stool strewn across the high-ceilinged interior is again void of characters but rich in drama. This piece was painted during Max’s residency at The Arts Club last year. Max’s personal frustrations with the forced domesticity of the pandemic is evident in Cogs Gears and Norfolk High Torque, 2020 and Omega Point, 2020 in which the artist imprinted his palms to capture the mounting tension he felt at the time. The majority of Max’s works presented in the exhibition have been produced during the pandemic (2020/21).

Adam de Boer’s laid back Californian and Indonesian surf series represent an alternate world to Max Prus’ net-curtained English East Coast, where dusky pink sunsets and surfer girls dominate his canvases. Adam’s sun-soaked works are created using batik wax which is then brought to life with misty, dreamy colours. Sepak Bola (after Vallatton), 2020, and Berenang di Malam, 2021, transport observers to a seaside village in Jakarta, while Afternoon Sessions, Waiting, and Crashing Wave are infused with an ethereal quality mirroring how the light catches the waves in the late afternoon on the West Coast.

Niyaz Najafov is an Azerbaijani artist living in Paris, his works draw heavily on memories which are closely associated to Soviet times and reflect the day to day lives of people in a similar vein to Max. The works exhibited in ‘Curtain Twitching’ feature isolated figures in psychologically charged settings, which echo the sentiments many have experienced during the pandemic. In contrast to Adam de Boer’s light-infused beachy canvases, Niyaz presents starker scenes at sea in muted and sombre hues. The same sea is interpreted in a myriad of ways.

Khaleb Brooks’ The tides are changing, 2020 uses the same motif of water to magnify the artist’s motivations which incorporate identity politics, exploring blackness, gender and the differences between memory and history. Khaleb’s latest series of paintings which are shown in the exhibition aim to revise the Atlantic Slave Trade. The protagonists of the works are half human, half sea-creatures that embody both African diasporic historical connections to water but also aim to position black queer people as both Olookun legends and futuristic beings.

The act of curtain twitching has realigned the way in which society interacts with the world, building an appreciation for its quiet beauty and teaching the art of observance. In a post-pandemic future the mounting intrigue into others’ daily lives will open up conversations with wider communities, leading to greater acceptance of differing ways of life and opinions.