My pieces have stories, with beginnings and ends, that describe imaginary places.
—Cristina Iglesias

Gagosian presents an exhibition of new and recent works by the renowned Spanish sculptor Cristina Iglesias. This is her first solo exhibition with the gallery, opening during London Gallery Weekend and scheduled to coincide with her Royal Academy of Arts commission, a large-scale sculptural environment in the Annenberg Courtyard at Burlington House from early June through the summer. 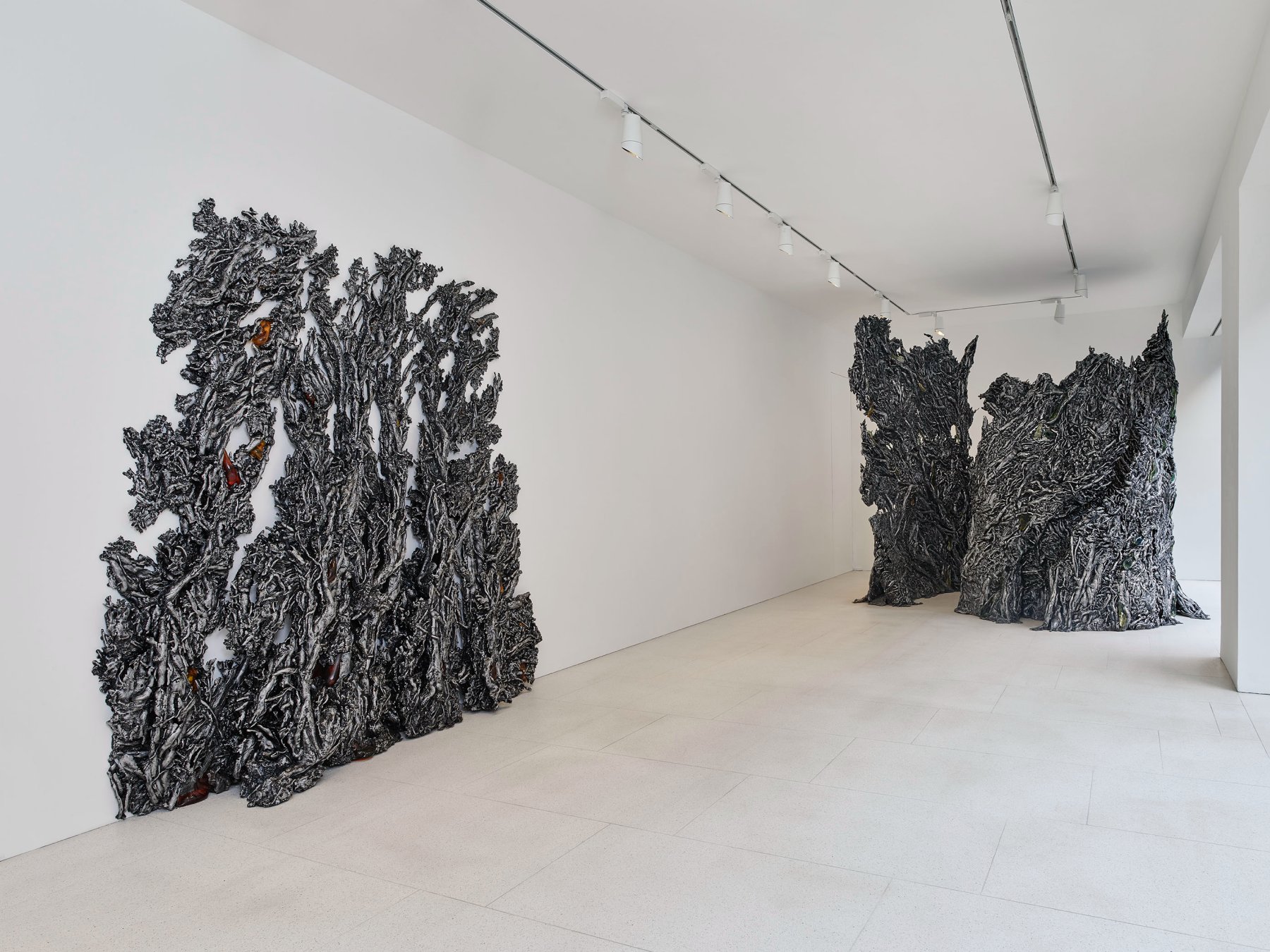 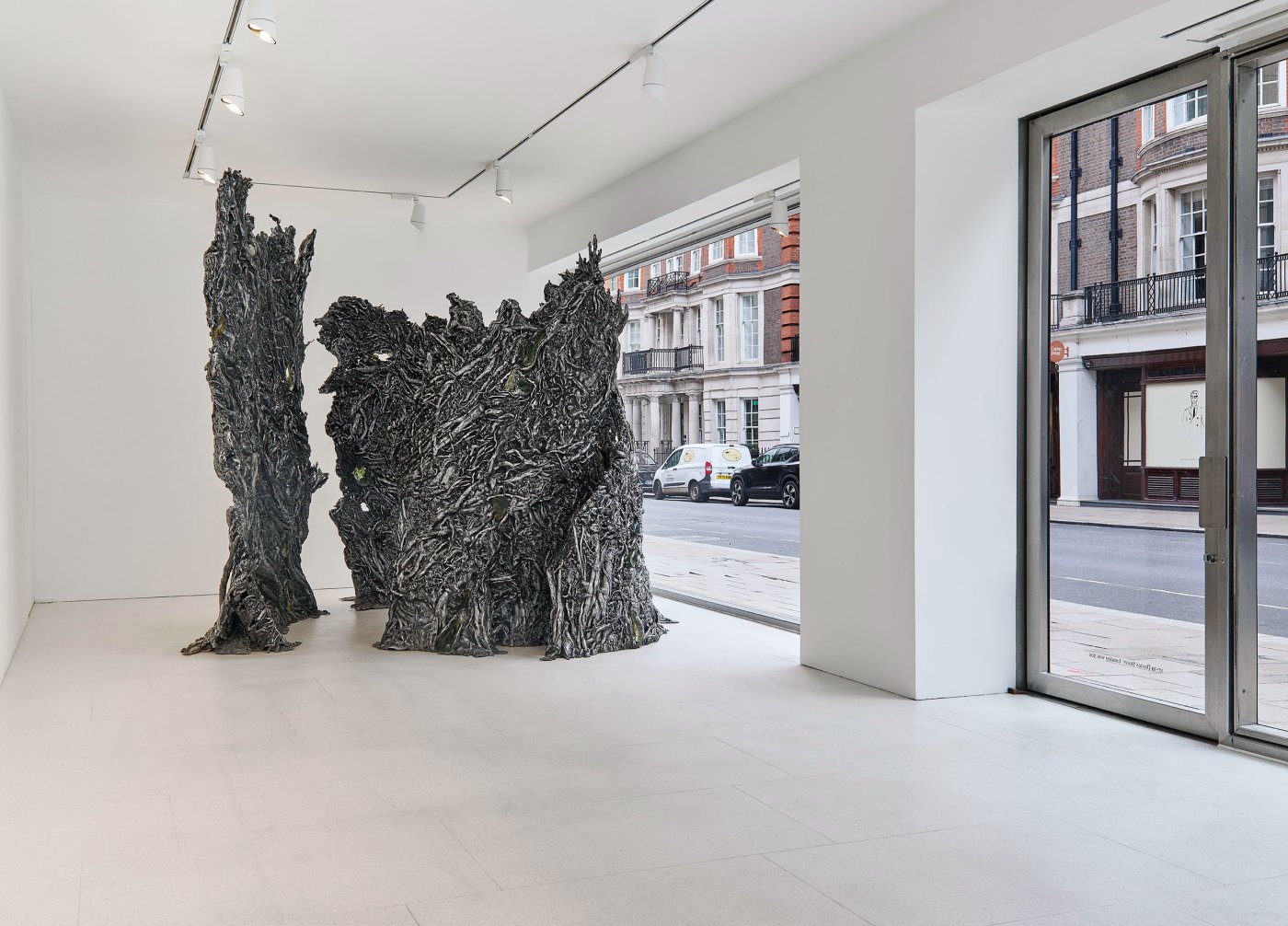 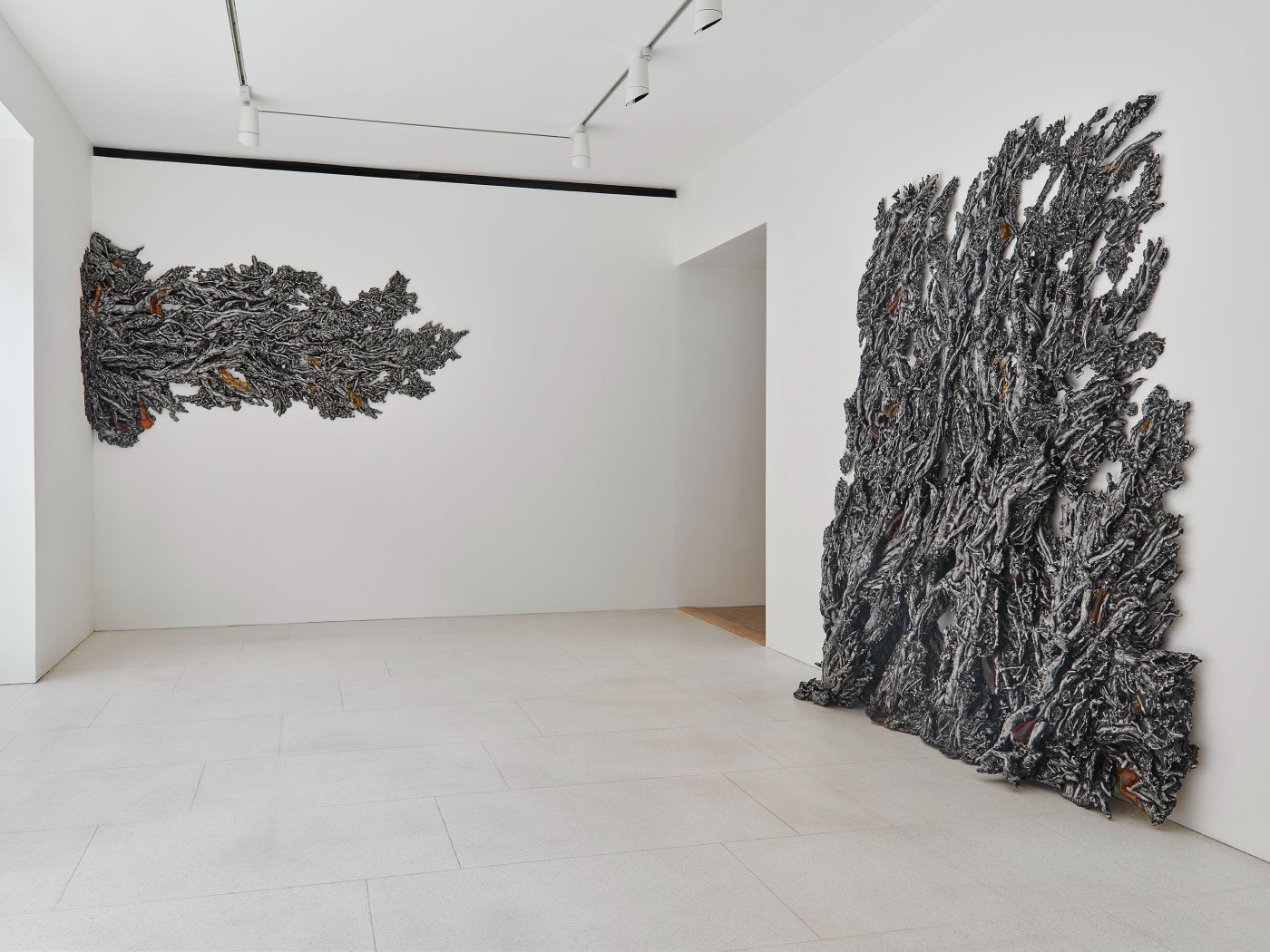 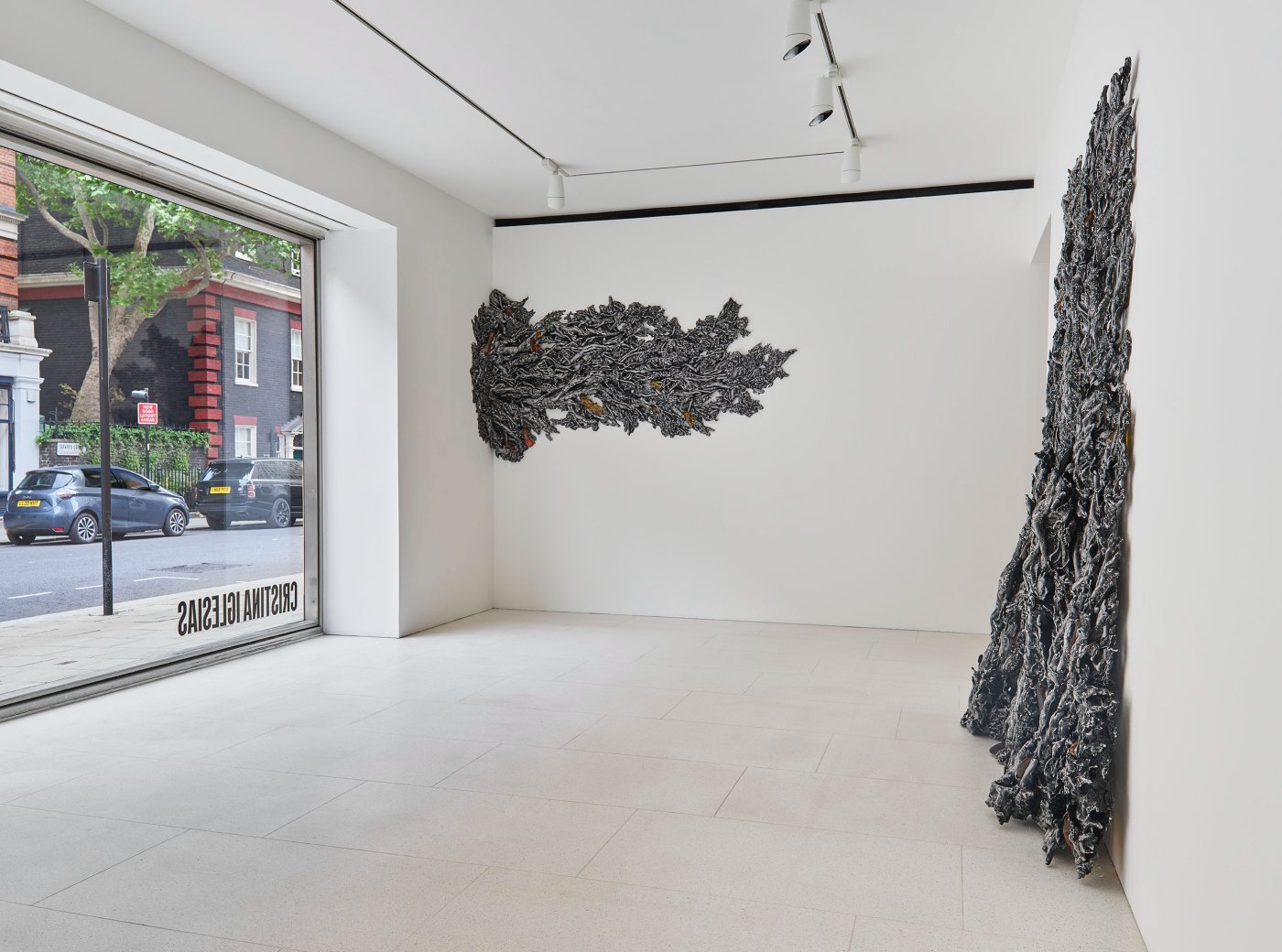 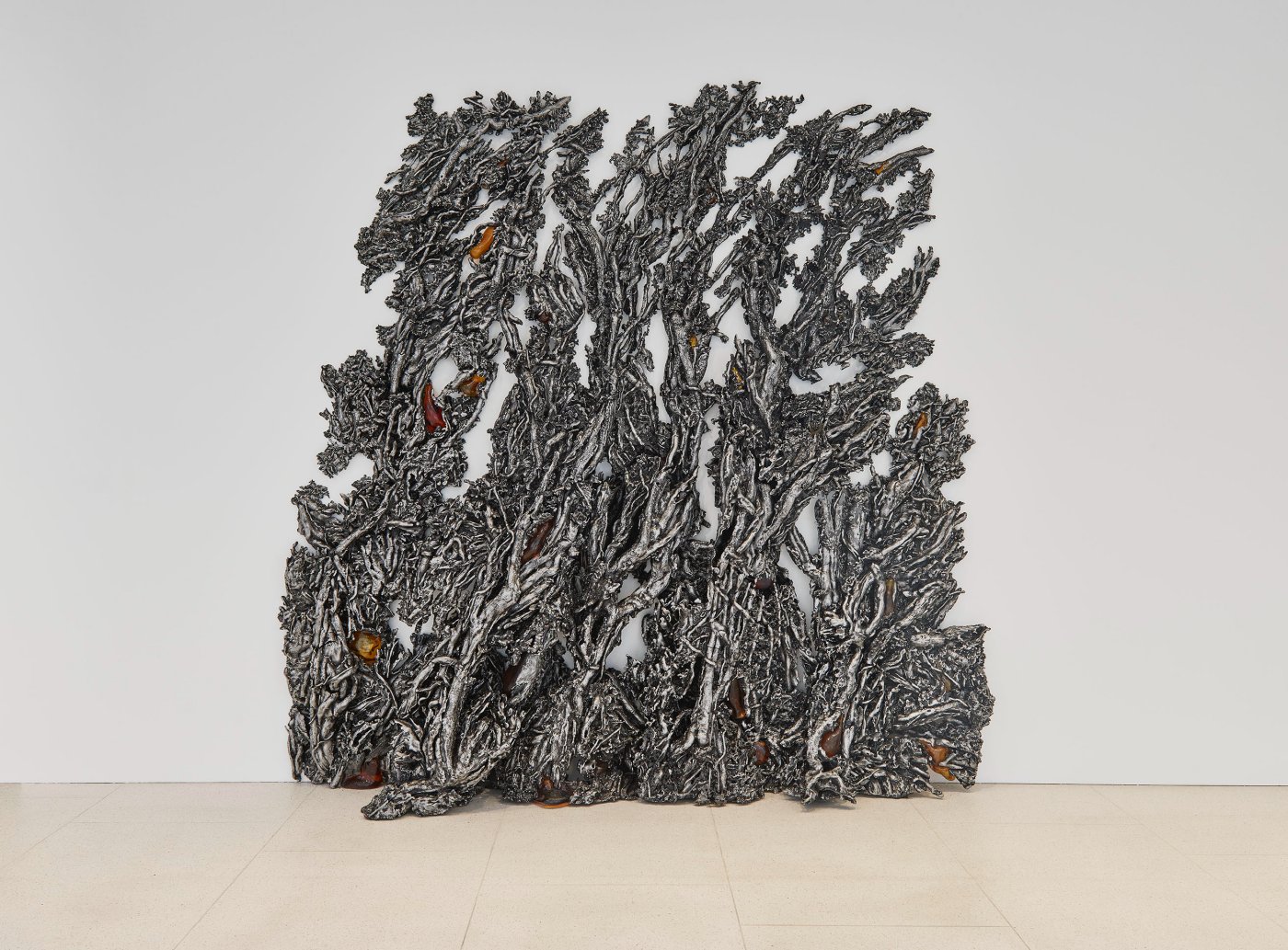 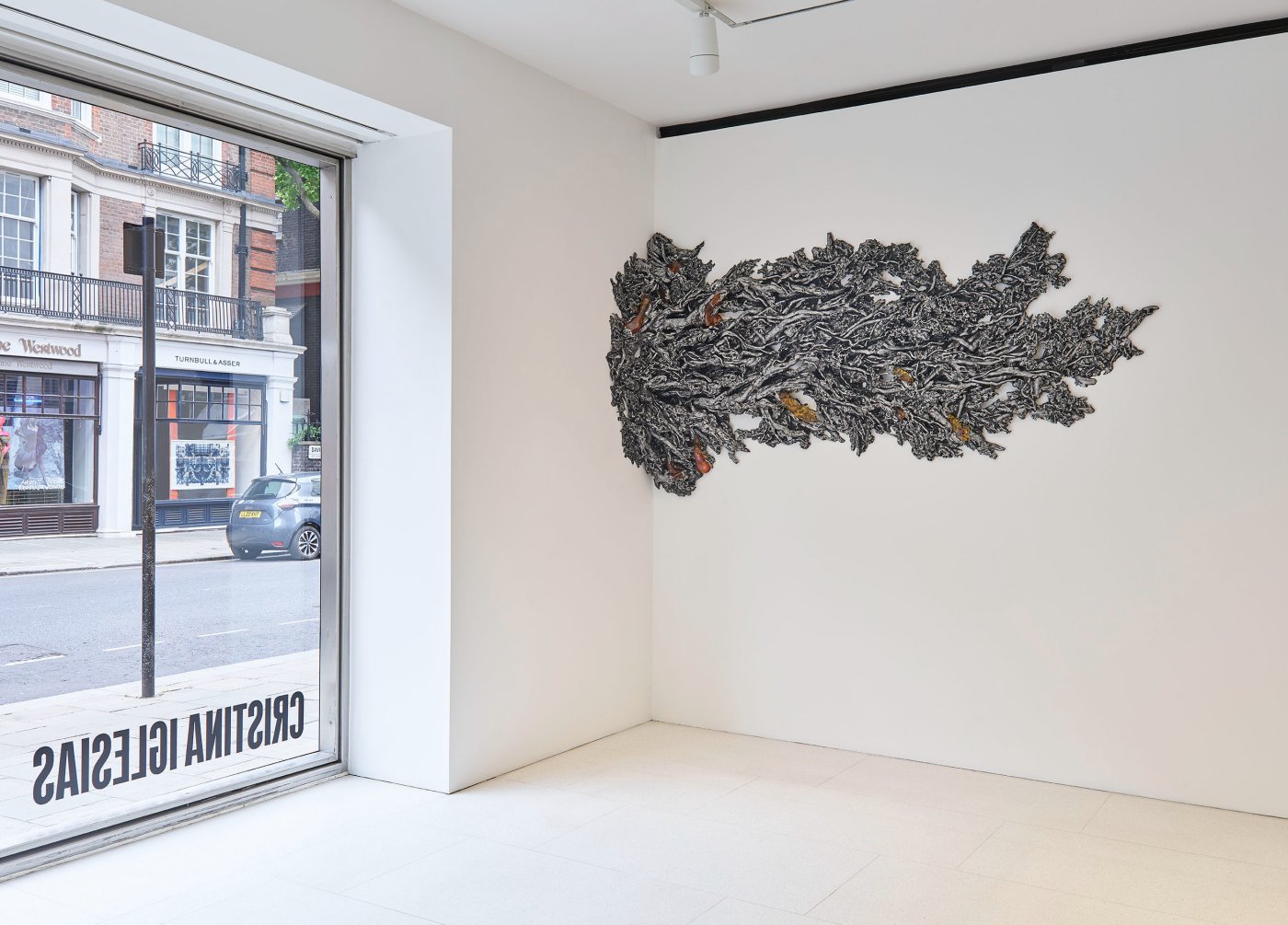 Over decades, Iglesias has evolved and developed a distinctive sculptural vocabulary that unites architecture, literature, and site-specific cultural influences in immersive built environments, autonomous sculptures, and wall works. She employs a formal language that brings the abstract together with the natural and the artificial, rendered in diverse materials that include metals, stone, ceramic, and concrete. From cunningly mechanized baroque structures to labyrinthine jalousies, tidal pools, and deep wells, she poetically redefines space by conflating interior and exterior to produce unexpected new sensory sites for the viewer.

The exhibition in London features works from the ongoing Entwined and Growth series, dense cyborg accumulations of foliage cast in aluminum and studded with cabochons of colored glass. The Entwined works of 2022 are mural reliefs spreading invasively across the gallery walls, while Growth I (2018) is a freestanding enclosure that rises from the ground, reaching skyward while leaning in on itself and the viewer standing within. Its rhizomatic forms twist and torque to constitute a densely textured, yet open structure. Aligned with the organic exuberance and grotesque theatricality of the Baroque imaginary, the effect is that of a primal sanctuary from the realm of science fiction, rendered in opulent detail.

With the Pozo (Well) series (2011–), Iglesias moves beneath the surface with contained vessels inspired by grottoes, whirlpools, and springs. Her latest iteration, presented here for the first time, is a bronze cast whose baroque crags and contours seem to follow and contain the ebb and flow of water itself, emulating geological formation. It relates directly to her most recent monumental permanent public commissions, such as Inner Landscape (the lithosphere, the roots, the water) (2020) at the Museum of Fine Arts, Houston, and Hondalea (2021), an astonishing abyssal environment constructed within the walls of the lighthouse on the island of Santa Clara in San Sebastián, Spain, through which water cascades and eddies in intermittent cycles. With Hondalea, Iglesias invented a theatrical place in which the viewer can reflect on ecological power and precarity while being absorbed into the vertiginous depths and rhythms of tidal illusion.

Landscape and Memory, a site-specific sequence of Iglesias’s “phreatic zones,” will be on view in New York’s Madison Square Park from May 23 through December 4, 2022.