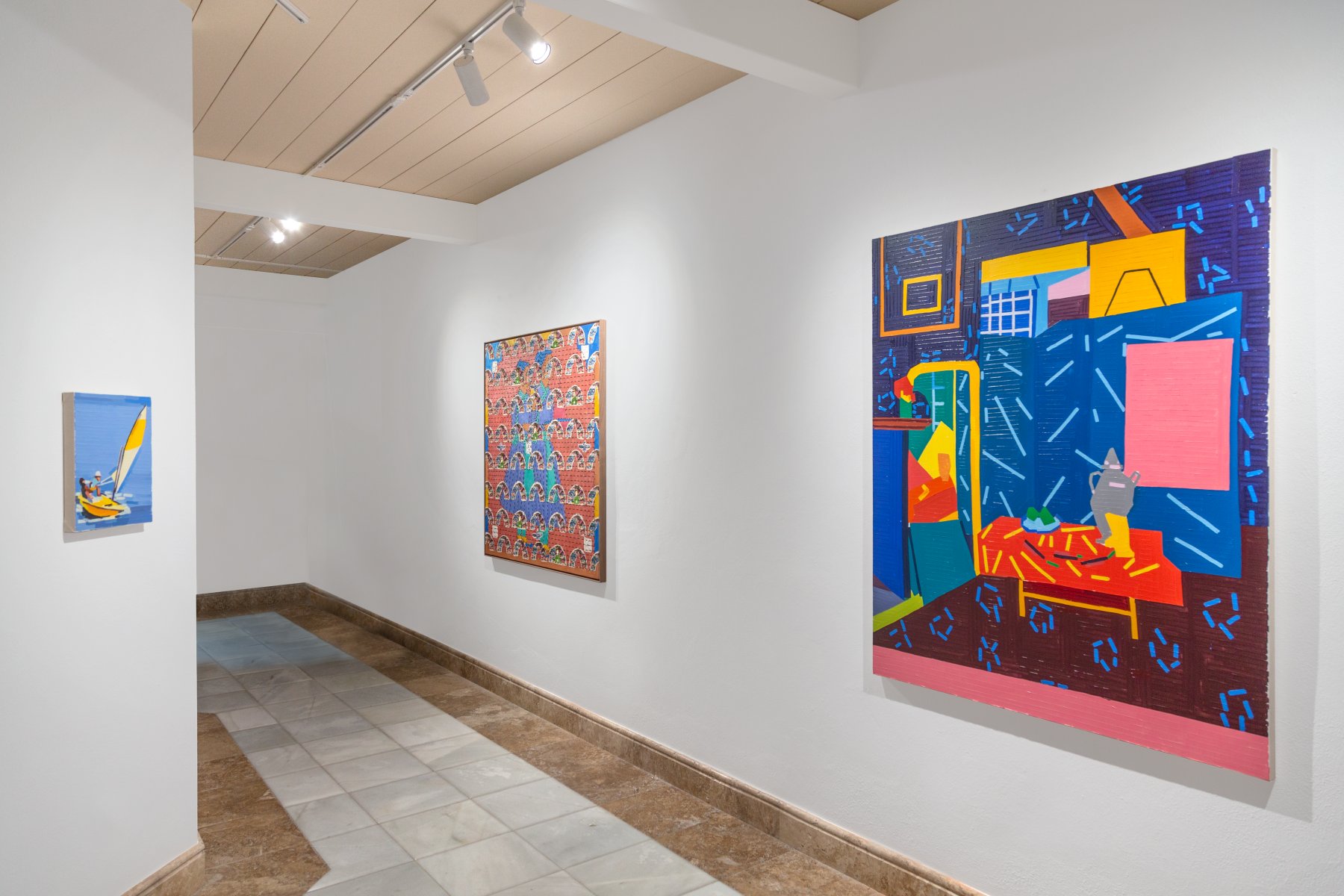 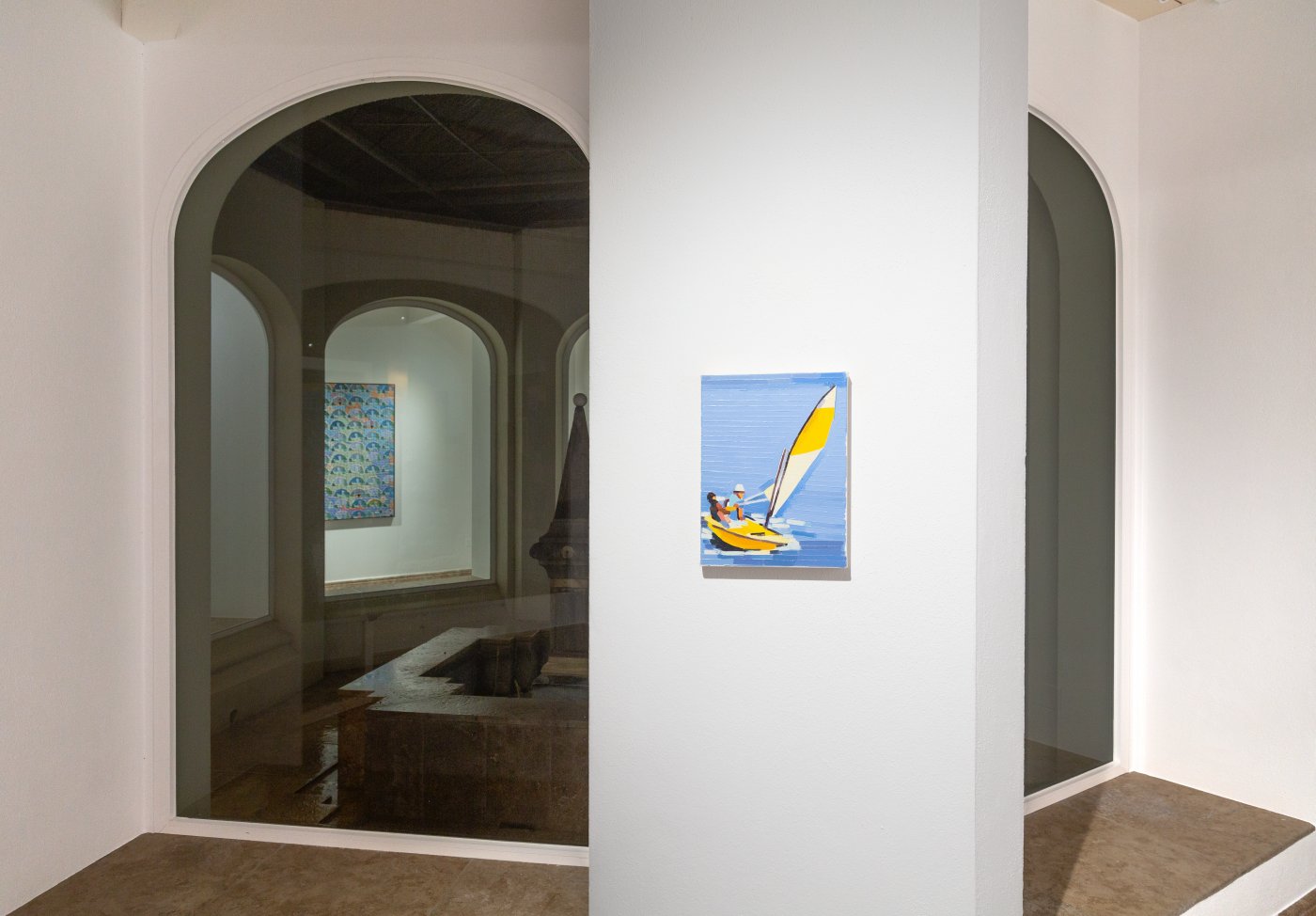 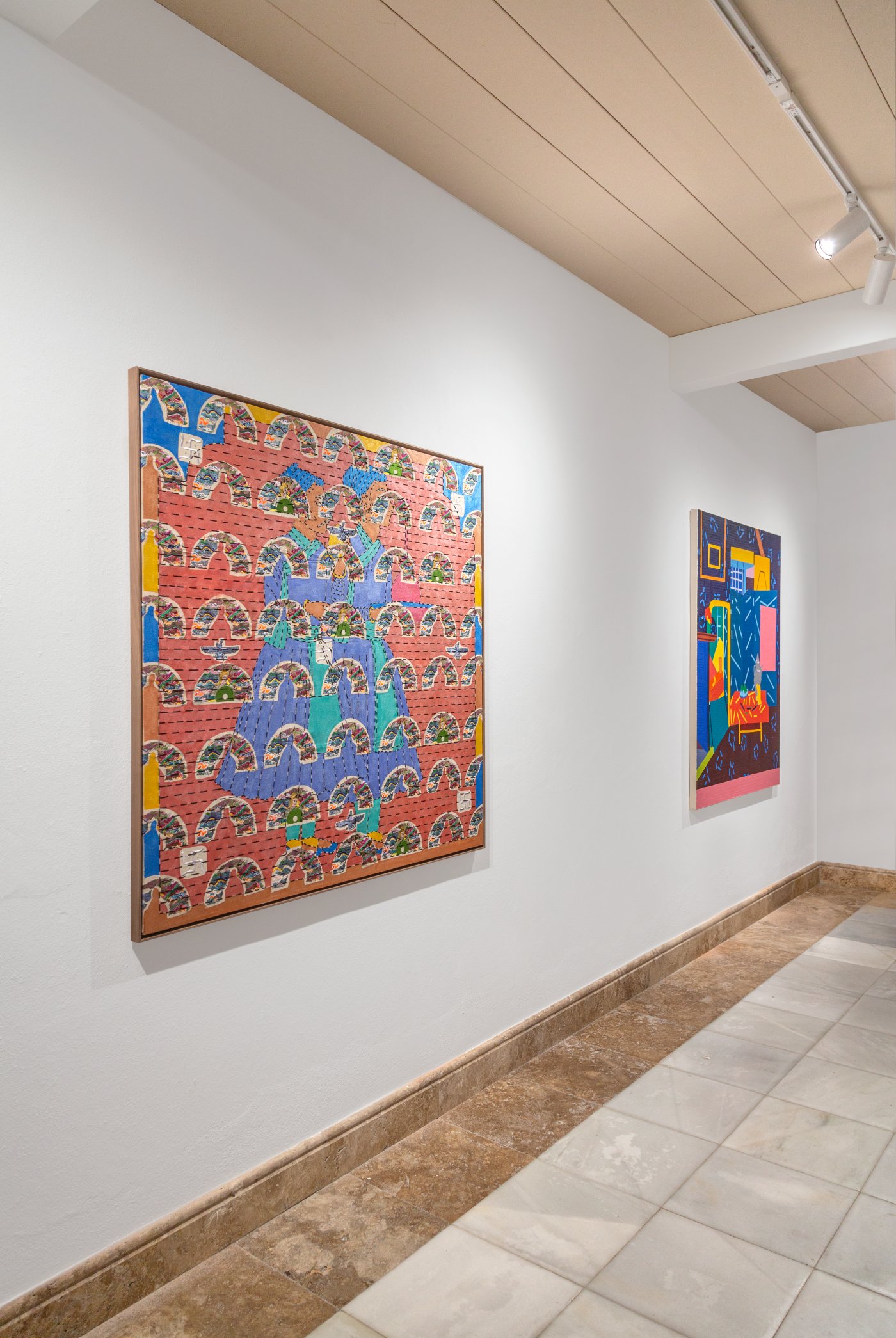 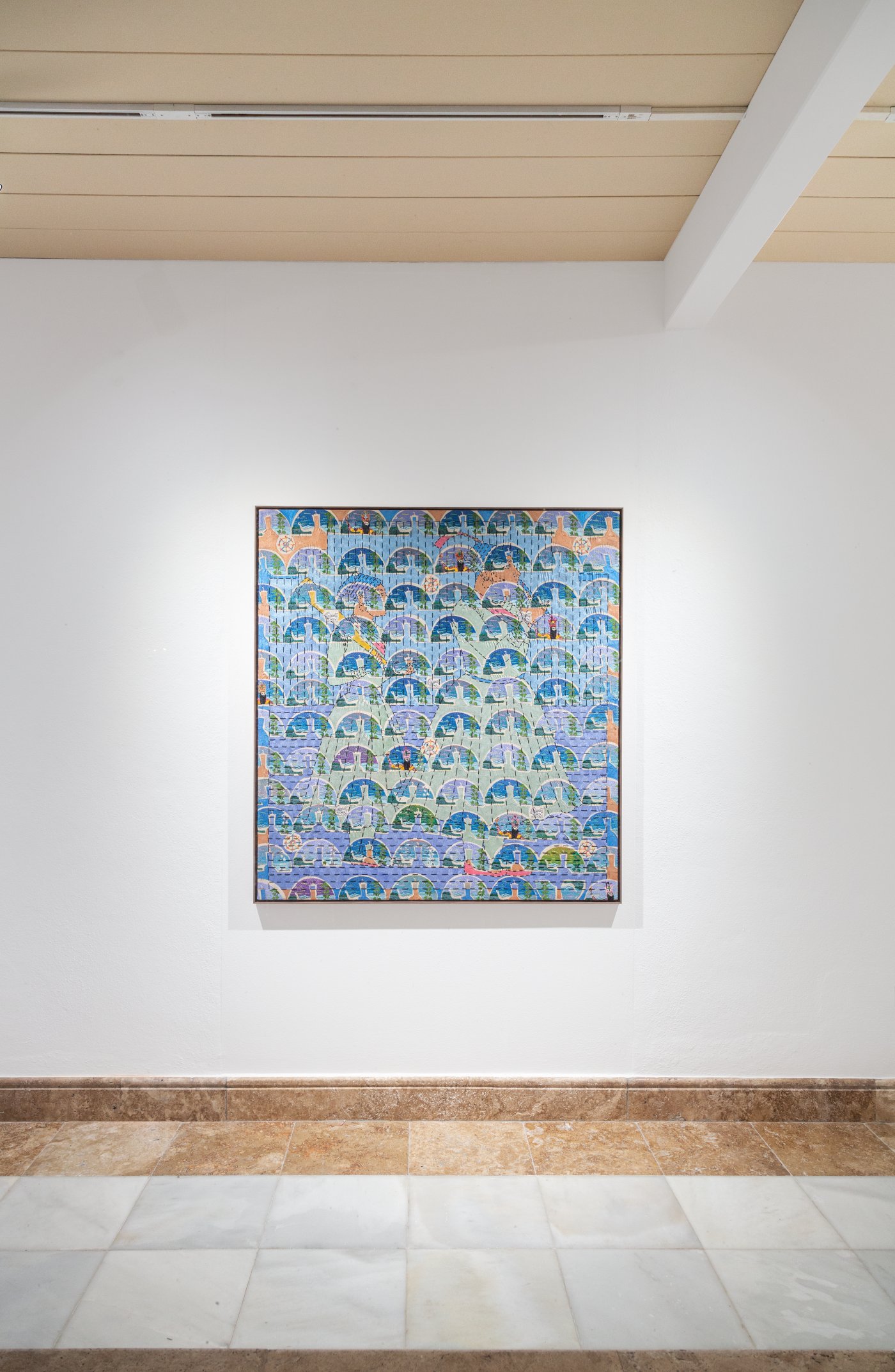 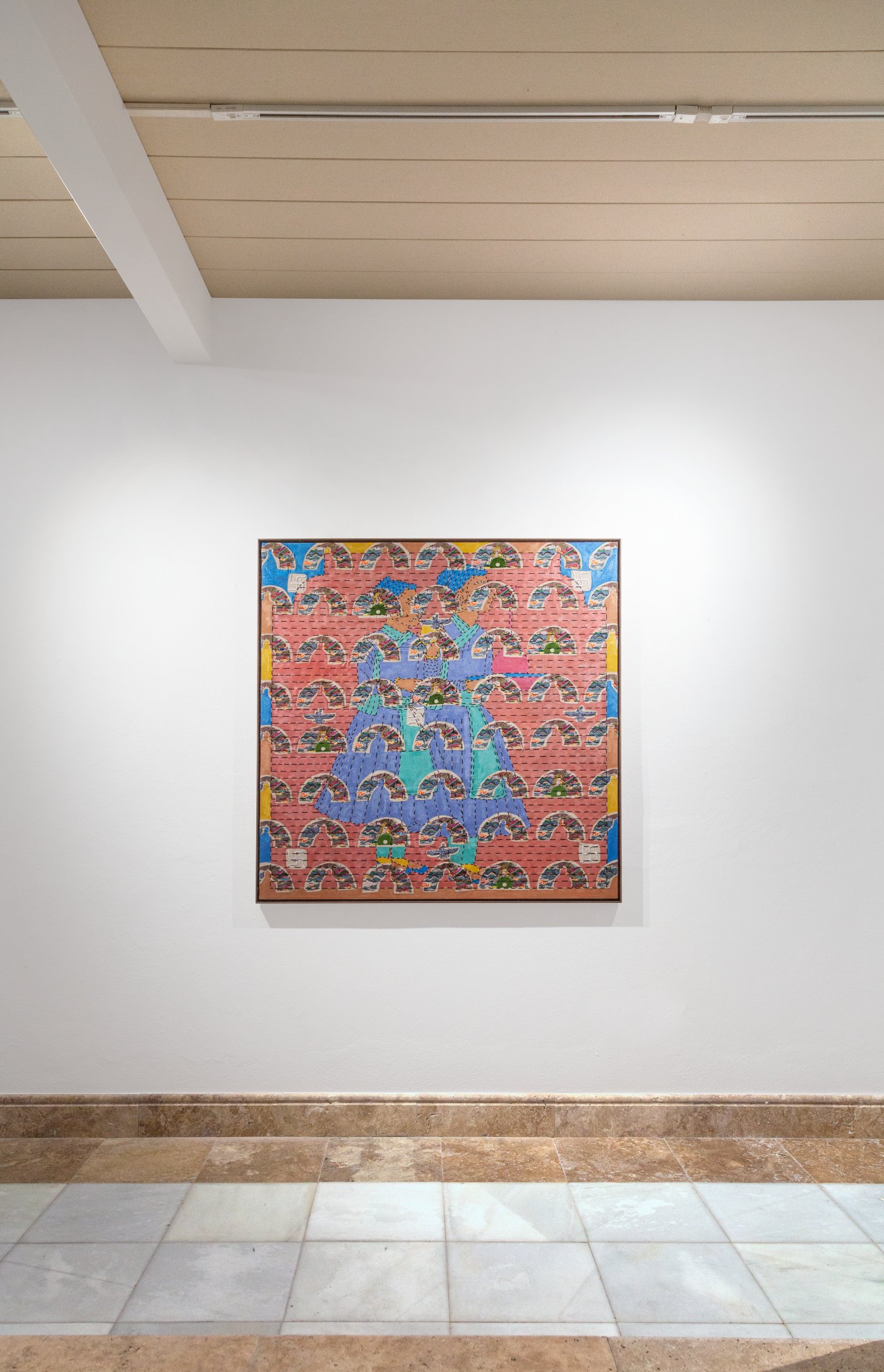 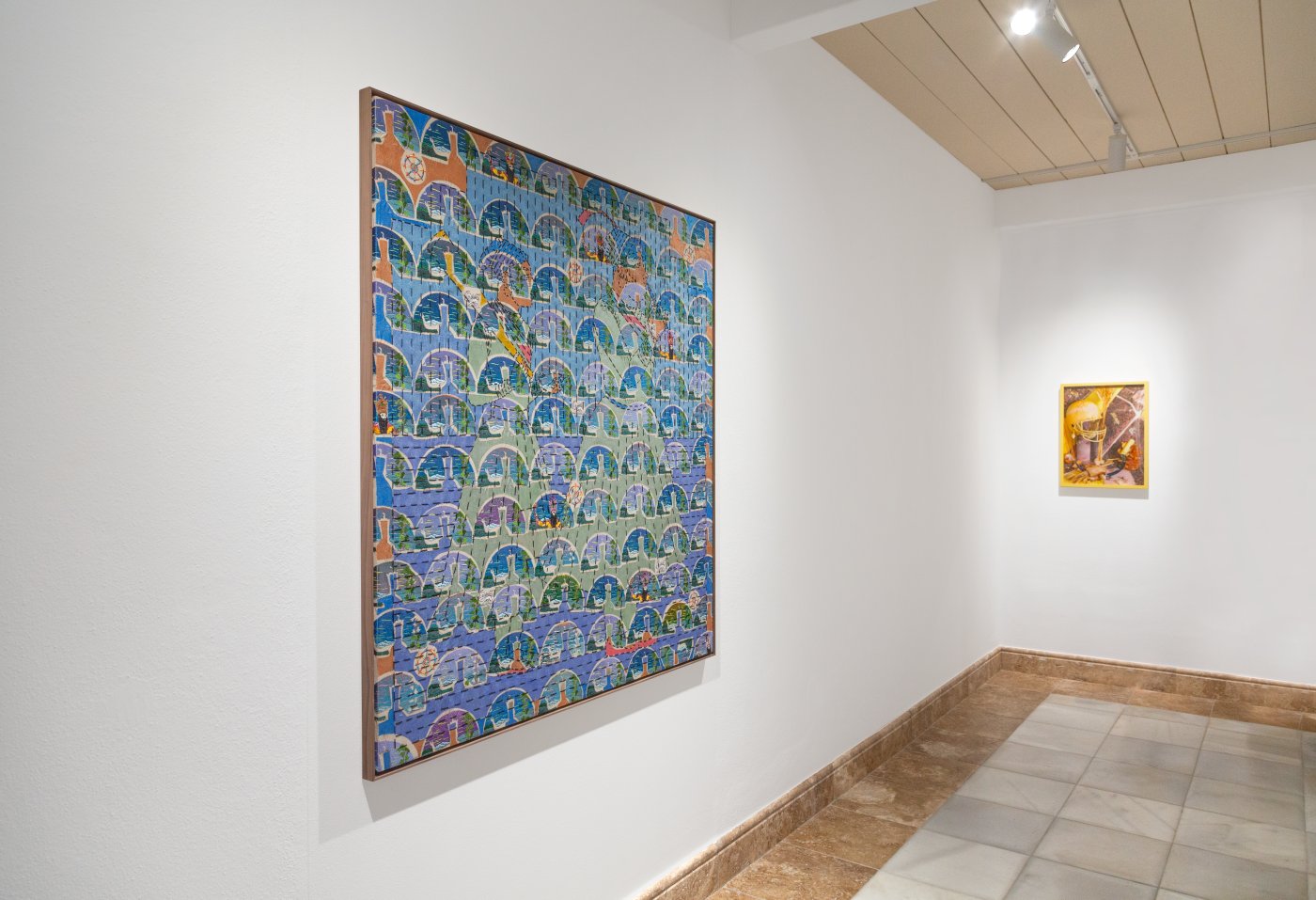 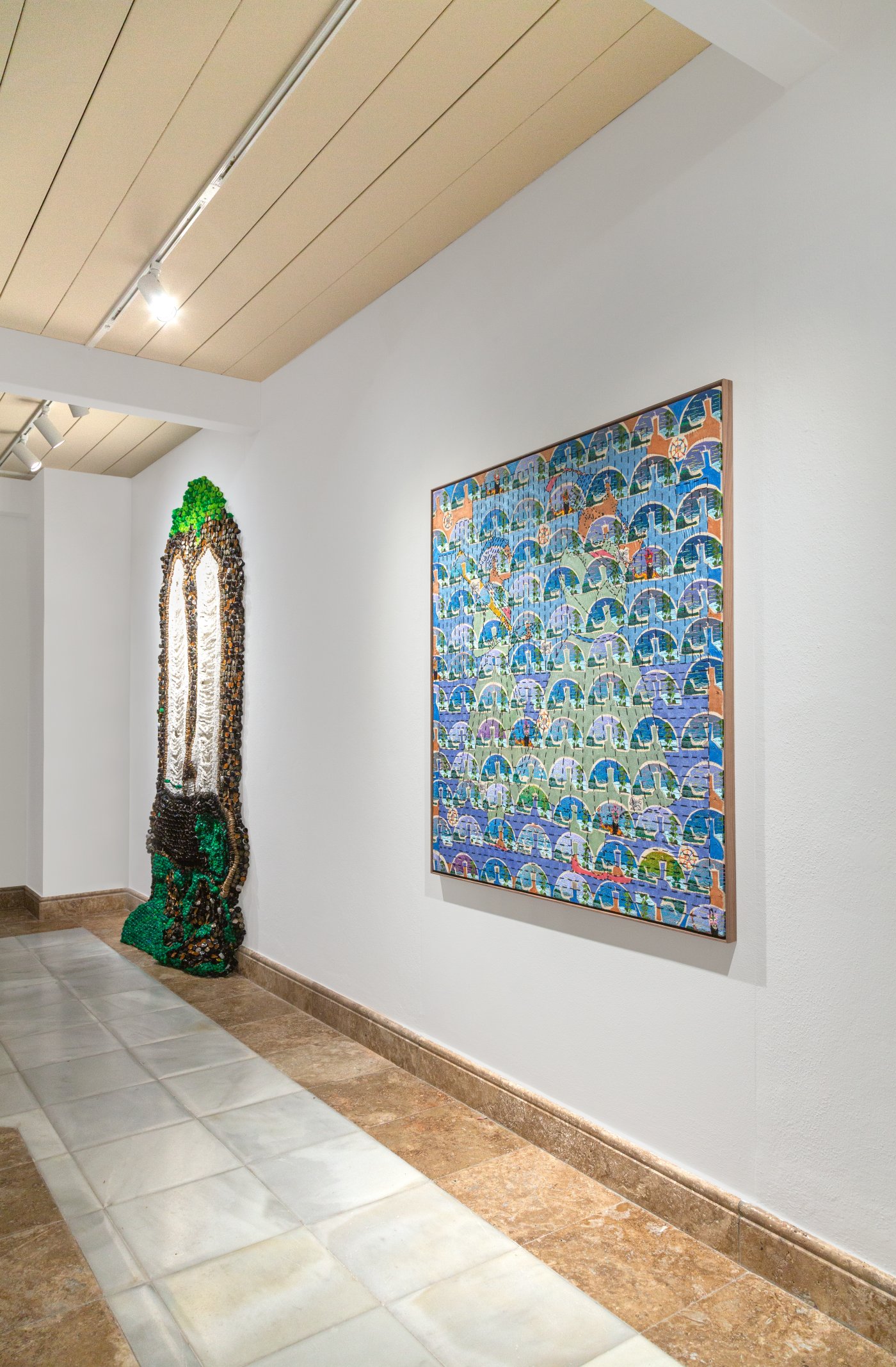 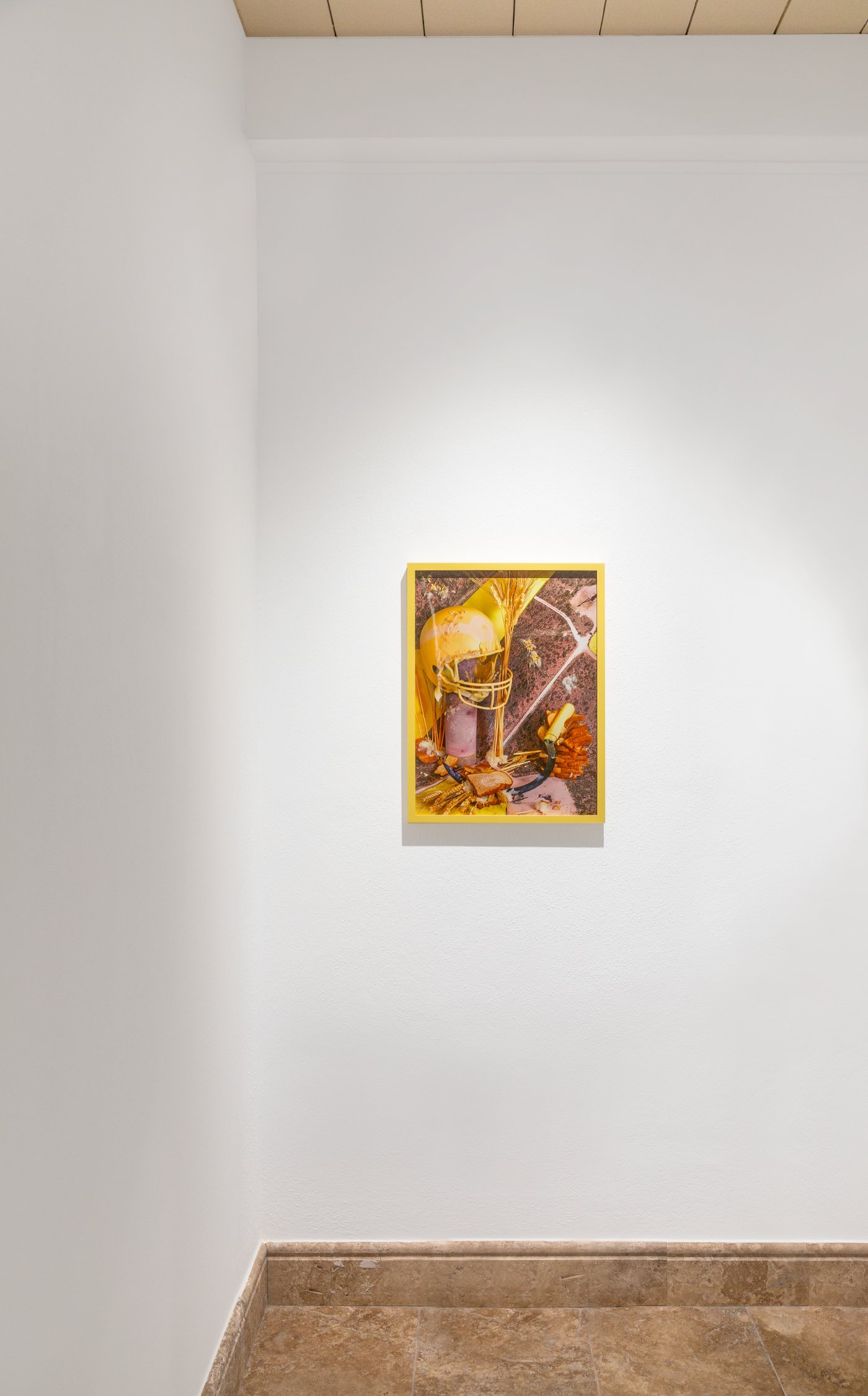 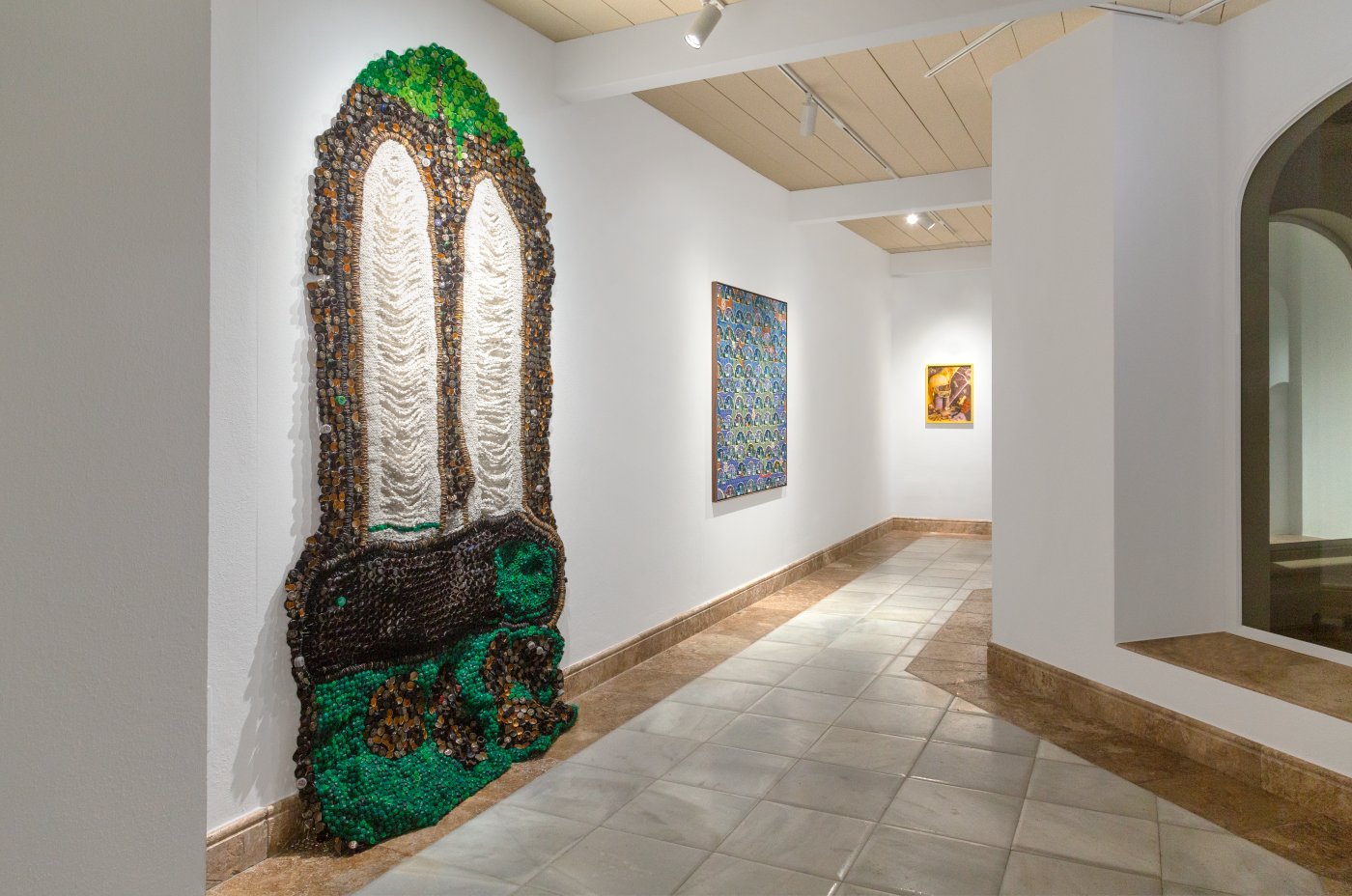 The creation of an imaginary always implies the construction of a visual stratification, of an scenario of action in which the elements interact within each other. It is interesting to note in this sense how etymologically the word “scene” originally indicates a covered, closed, protected place, the opposite, therefore, of the idea of ​​the scene that we have nowadays, considered as a place of opening, of exhibition or of manifestation. However, the cover has the function of protecting the cruel delicacy of what is being staged, and it is impossible not to consider the scene as a pattern of frames aimed at showing only what it is chosen to be shown. A structured imaginary, therefore, exhibits all its aesthetic complexity in the inextricable intertwining that arises from the dialectic that exists between the layers at stake within it. The imageries present in this exhibition can be considered as two-dimensional scenic beauties that praise, each in its own way and each one according to the visceral artistic search that distinguishes the stainless and delicate maze formed by the parts of these visual settings stages and their fleeting equilibrium, the rhythmic use of tenacious and graceful allegories, based on the deep investigation of spatiality and color. Therefore, as we pass through the proscenium that “Constructing an imaginary” gives us, we arrive at that liminal and intangible non-place that blossoms from the perennial dialogue full of reverberation that is established between the eye and the polyedric vastity of these two-dimensional imaginaries.

The Italian artist Gioele Amaro (1986, Italy), Parisian by adoption, is the perfect example of what is defined par excellence as a digital painter. Using his admirable ability of using the language in the digital environment, essentially composed by the computer, the graphic tablet and the digital brush, Amaro combines traditional media and new technologies. His paintings balance the solid and immutable “pictorial” aspect of the traditional painting, with a more flexible and purely computerized approach: his works are first digitally “painted” and then printed on canvas and finally enriched with several layers of paint. His creations contribute greatly into expanding the universally recognized pictorial repertoire that travels inexhaustibly in new and infinite directions: intangible forms and highly anamorphic simplified imaginary stand out surrounded by illusory three-dimensional effects, touching on detail and underlining color combinations; When looking at the paintings of the Israeli Guy Yanai (1977, Haifa, Israel) the sensation of a previously lived experience, a déjà-vu, is inevitable. Striking shapes and colors and a vibrant, simplified and reduced depth of field are the background of extremely everyday subjects, representing still lifes of plants, living rooms or more generically domestic interior spaces, suburban architecture, sailboats, etc. Structured in meticulously layered horizontal rectangular blocks or stripes, Yanai’s considered “linear” pictorial style strongly characterizes his works. Influenced in content and color palette by modern cinema, photography, television, advertising and a variety of important artists both ancient and 20th century such as Henri Matisse, David Hockney or Philip Guston, Yanai reinvents elements of modern architecture, everyday objects and nature in all its manifestations in a decidedly flattened and abstract way; Sheida Soleimani (1990, Indianapolis, Indiana) is an Iranian-American multimedia artist, activist and teacher, whose body of work is based on a critique of Iranian human rights violations and current status quo over the geographic area in question and advances her critical research on the dislocations that define the relationship between Iran and the United States. Super positioning original images on sculptural backgrounds to be able to illustrate the complex relationships between these two hostile nations, photographs of Soleimani, effigies of atmospheres and states of mind, at the same time frightening and grotesque, are virtual palimpsests composed of bright colors and constructive figurations. Paradoxically, this subtle practice of overlapping puts first the heavy ethical questions about how power works, justice is served, and about the possible consequences of amorality. Soleimani’s work produces the possibility of a relationship between one place and another and represents a rebellion against the norms of limited behavior, with abstract elements placed in the middle of the literal; The work of the Iranian-American Ardeshir Tabrizi (1981, Tehran, Iran) is an exploration of what Iran really is in all its essence, from the beginning until today, through his personal journey of reconnecting with it. Using signs, drawings and symbolic images from this easternmost state of the Middle East, Tabrizi combines references to historical objects and tapestries with her personal memories. Tabrizi’s fragmented mixed-media paintings are omniscient narrators of a bygone greatness, they look like ruins, recall precious mosaics, and preserve a unique and curious interpretation of Persian history and modern Iranian times, through the use of images and symbolism that lend them to them. brings purposeful complexity to life on canvas using thread and embroidery; Moffat Takadiwa (1983, Karoi, Zimbabwe) is a leading figure in the post-independence Zimbabwe generation of artists. It deals with various topics, from material culture to spirituality through everything related to environmental problems, through works that weave discarded and found everyday objects, generating organic forms that recall the excessive shine of jewelry or ritual minimalism. Communicating his concerns about consumerism and postcolonialism, Moffat draws aesthetically from the traditions of his ancestral culture. His practice is first exploration and then documentation of cultural identity and the environment, highlighting in particular the large-scale production of plastic waste and the resulting environmental impact. His works are inspired by the traditional textiles of Zimbabwe, thus proposing a contradiction of strong impact: creations balanced between the heavy and the regal.

Courtesy of the artists and Badr El Jundi, Marbella