In putting technique to the service of poetry, Kluge reconciles us with our civilization. It is modern art in all its conception because, retaining its teaching of the past, he renews it. – Le District de Paris 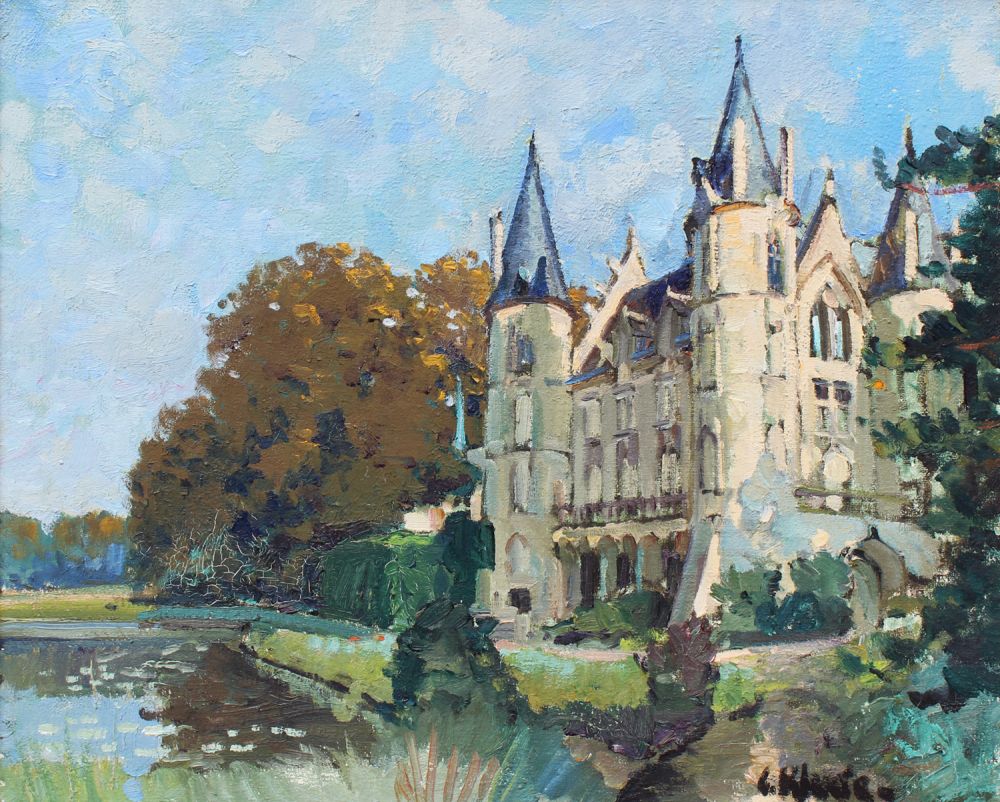 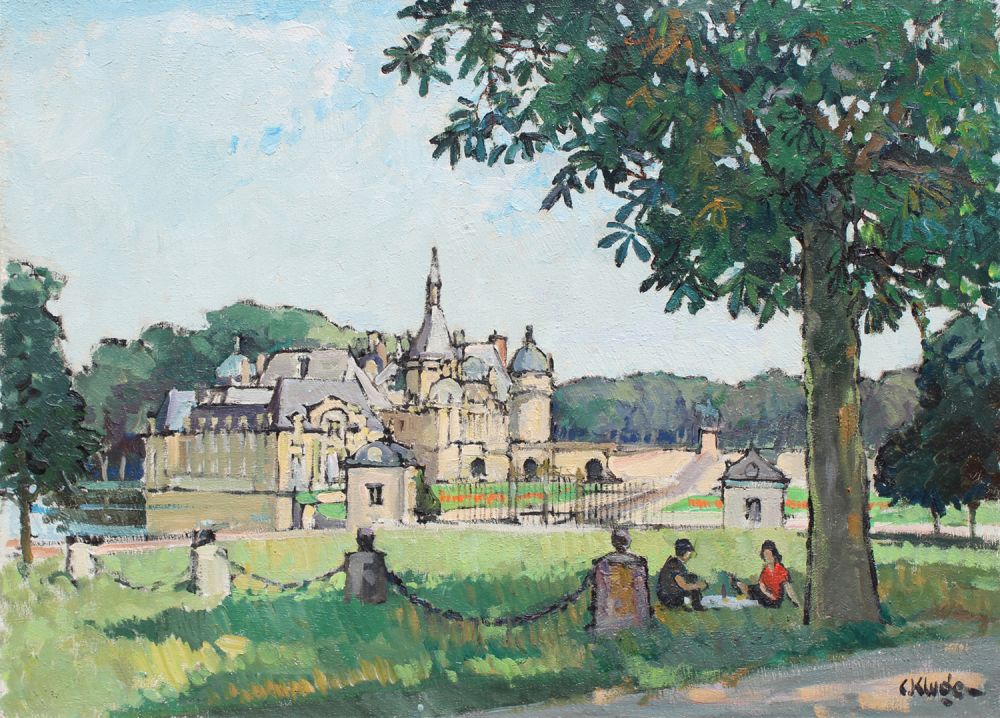 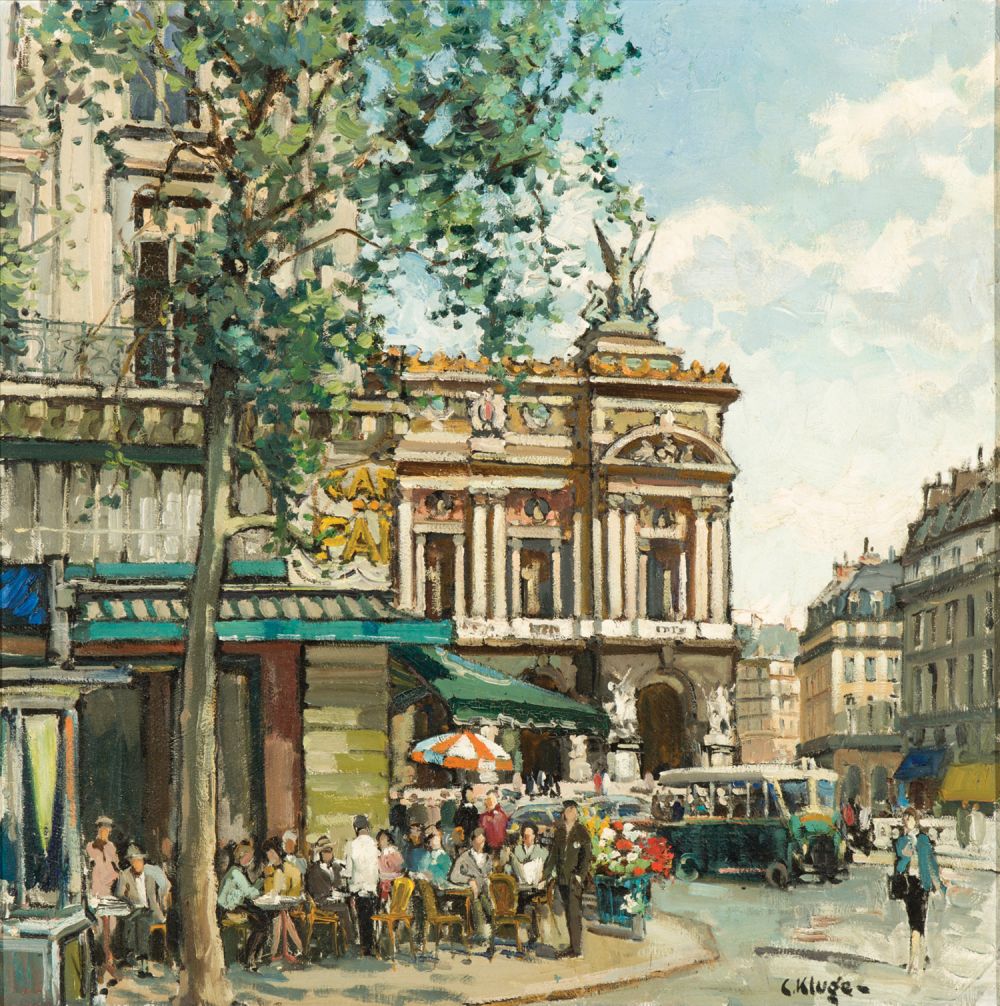 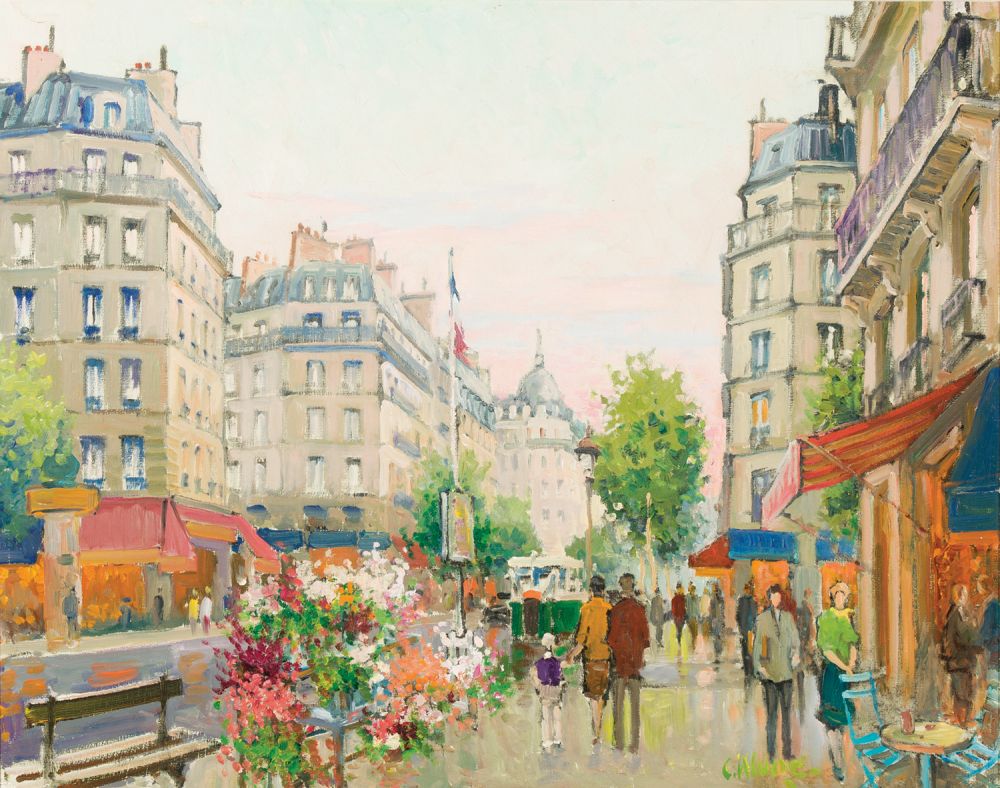 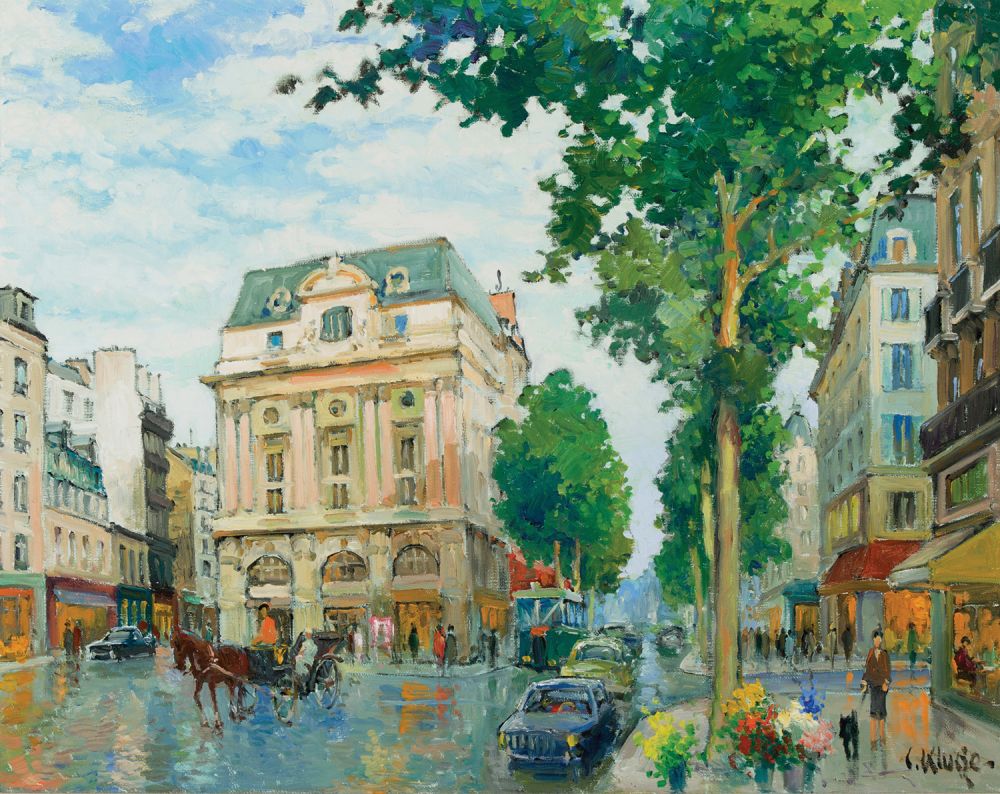 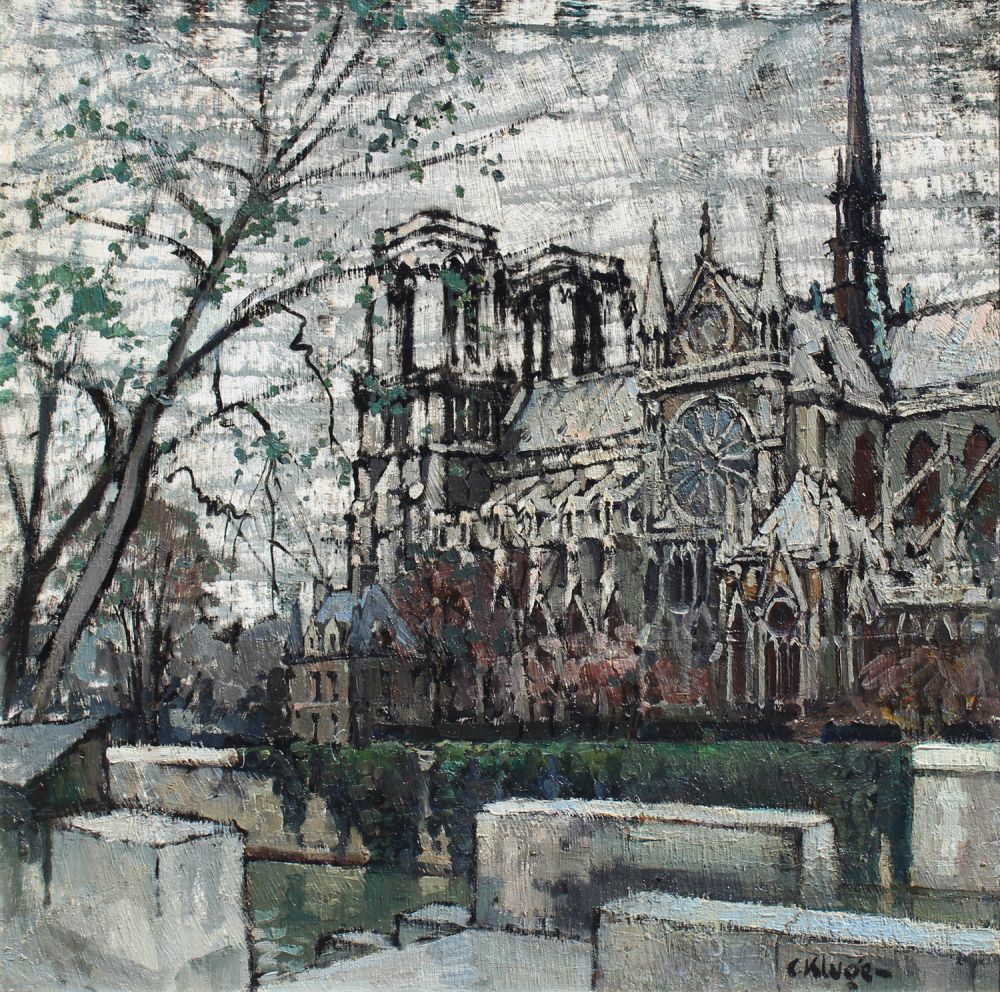 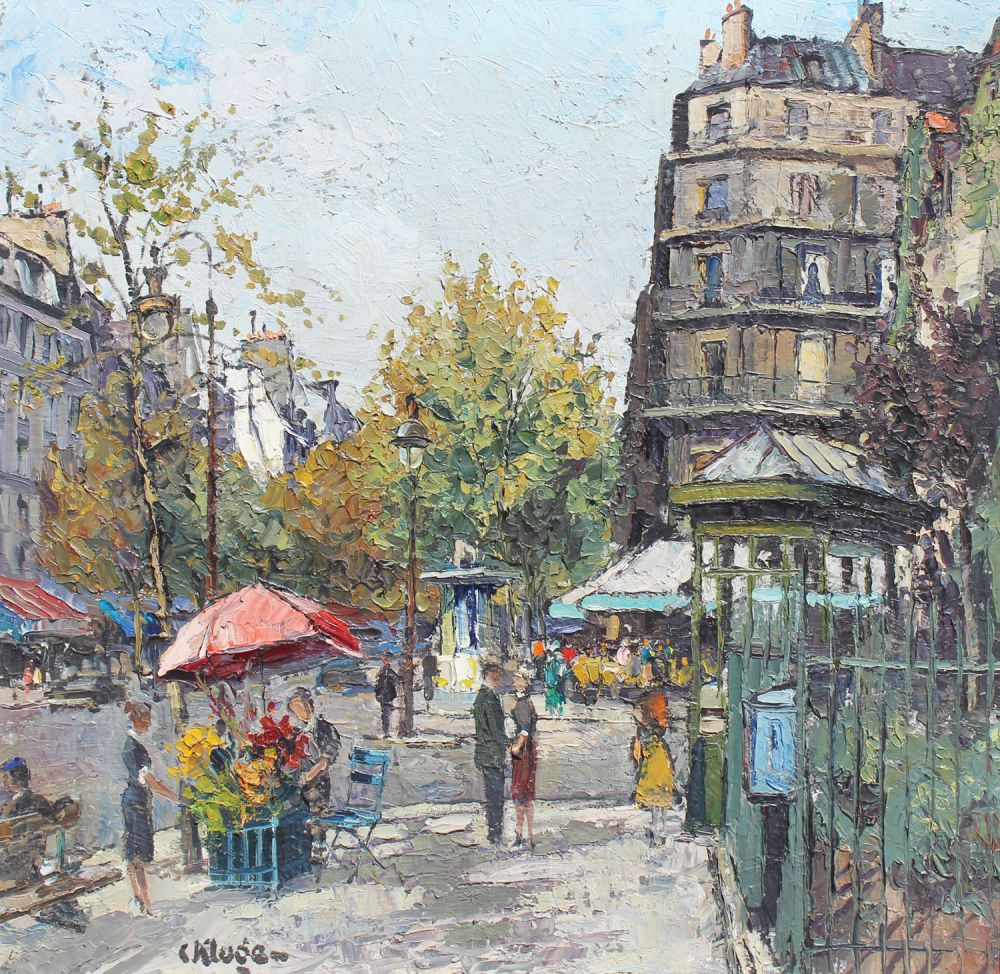 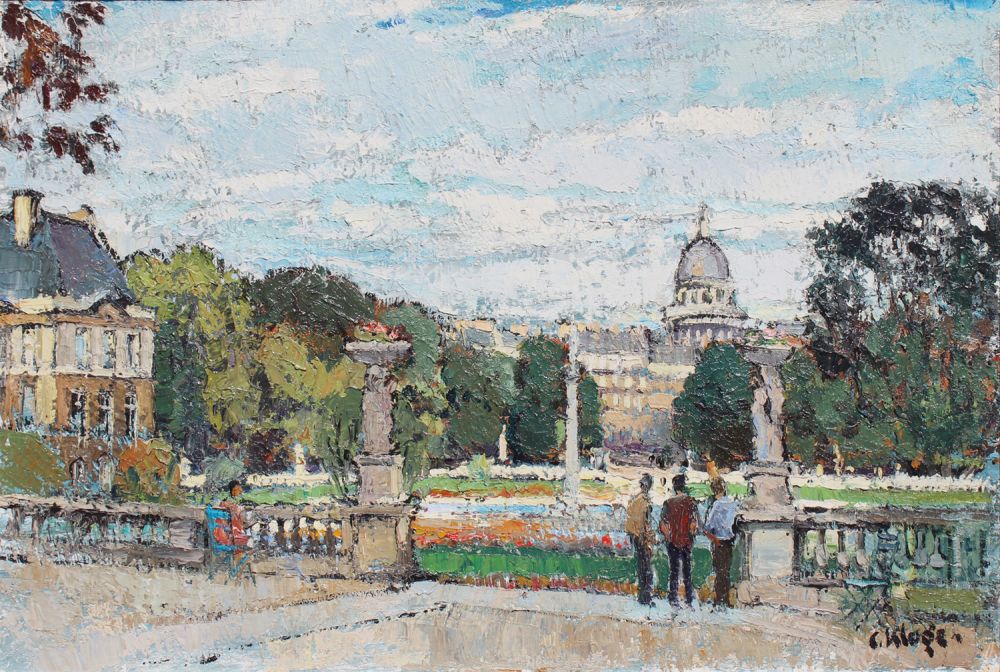 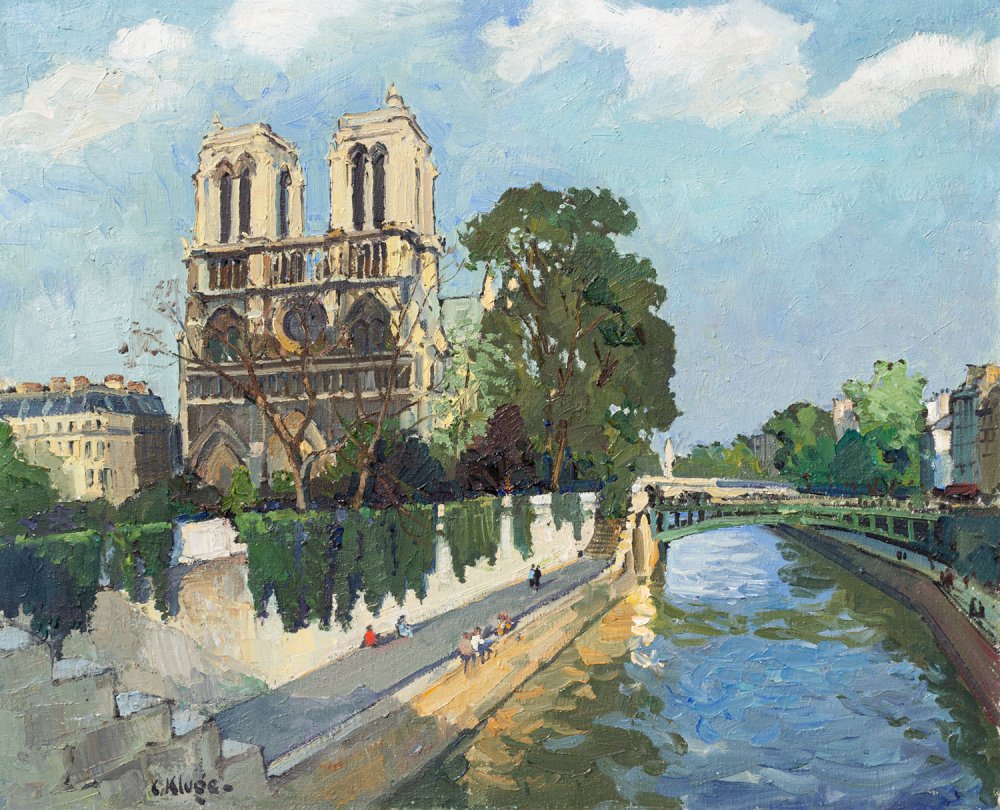 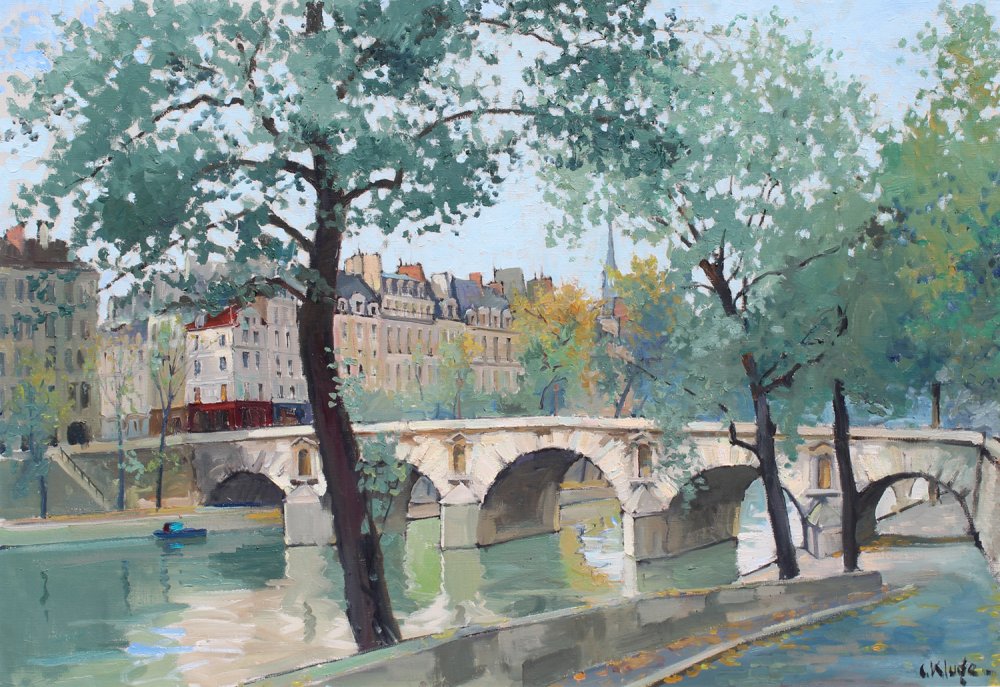 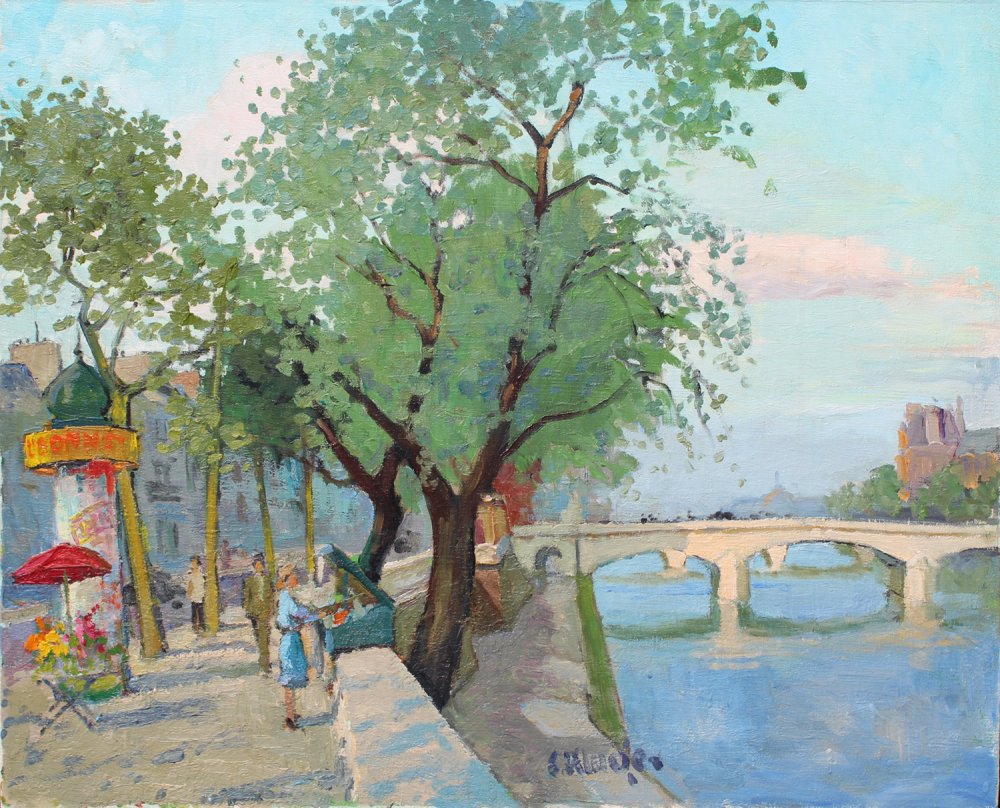 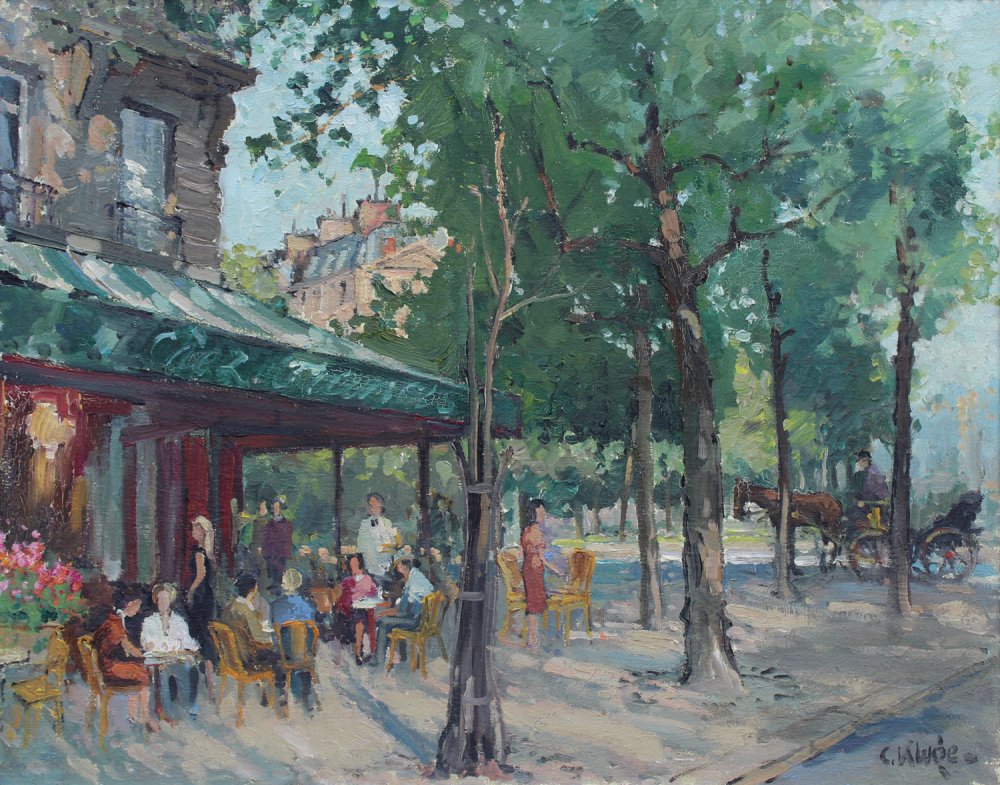 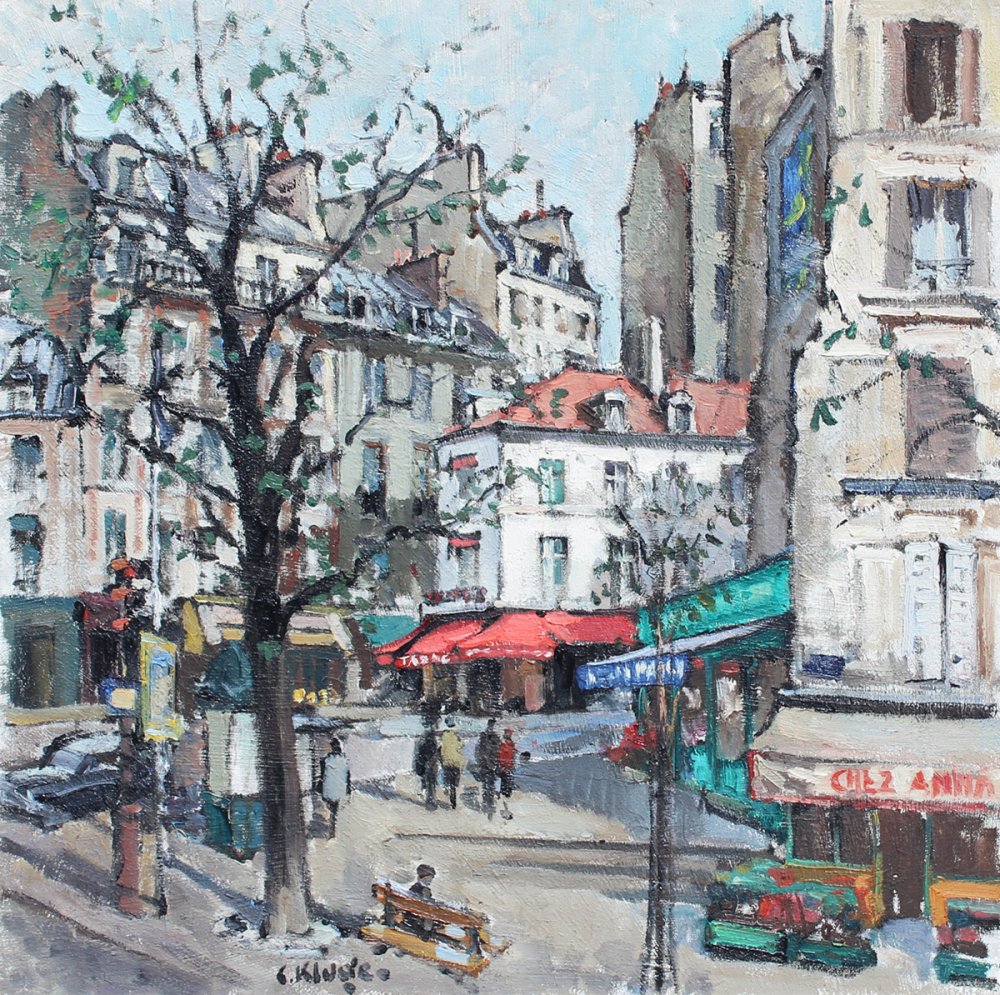 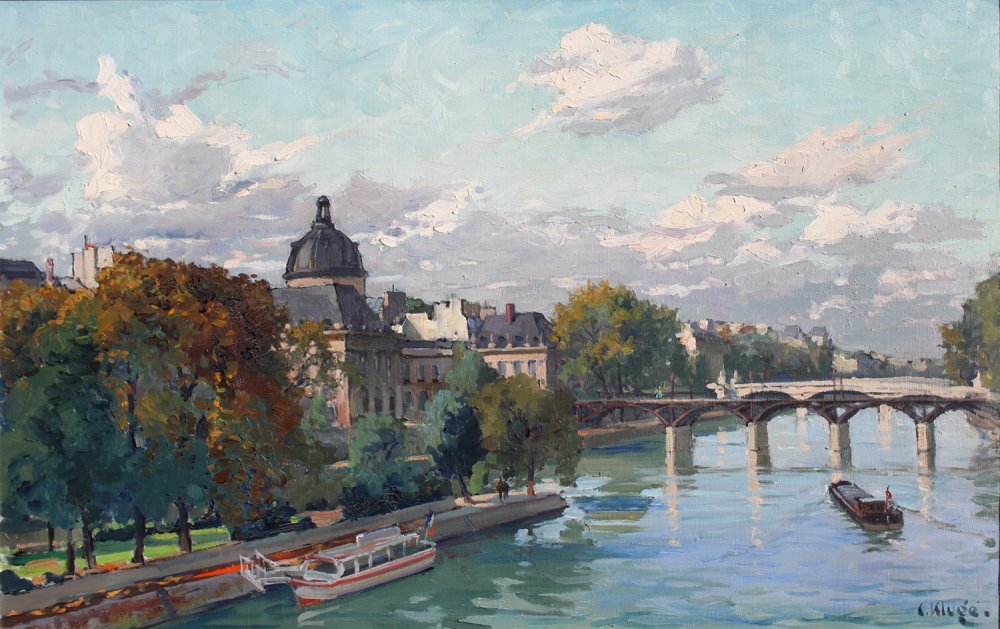 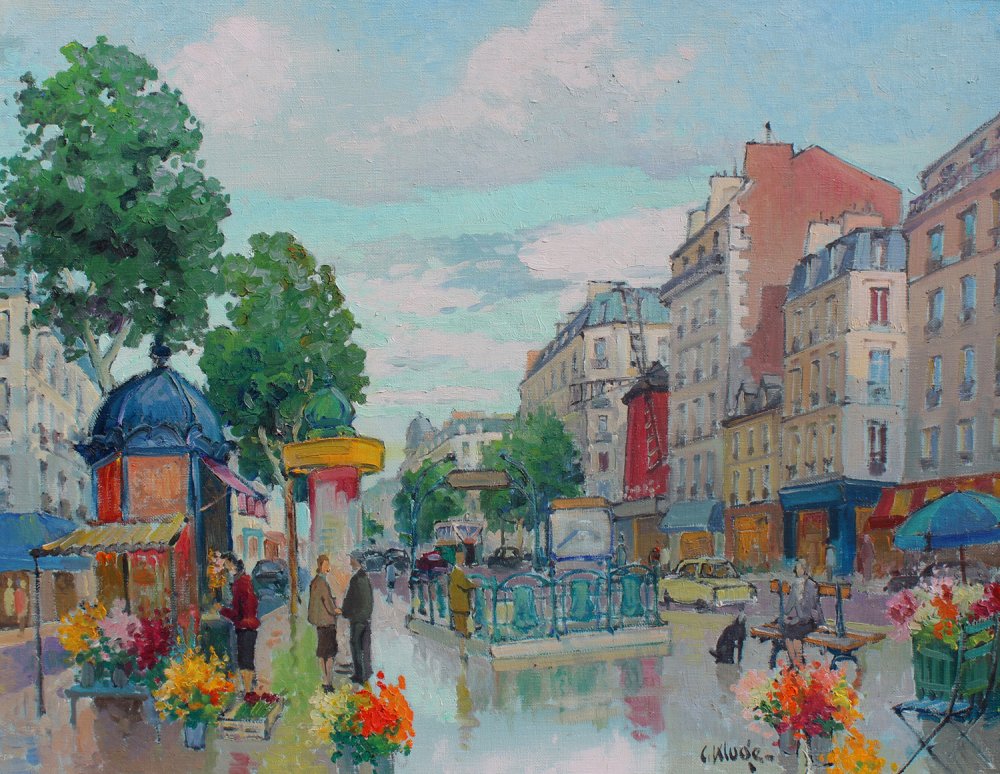 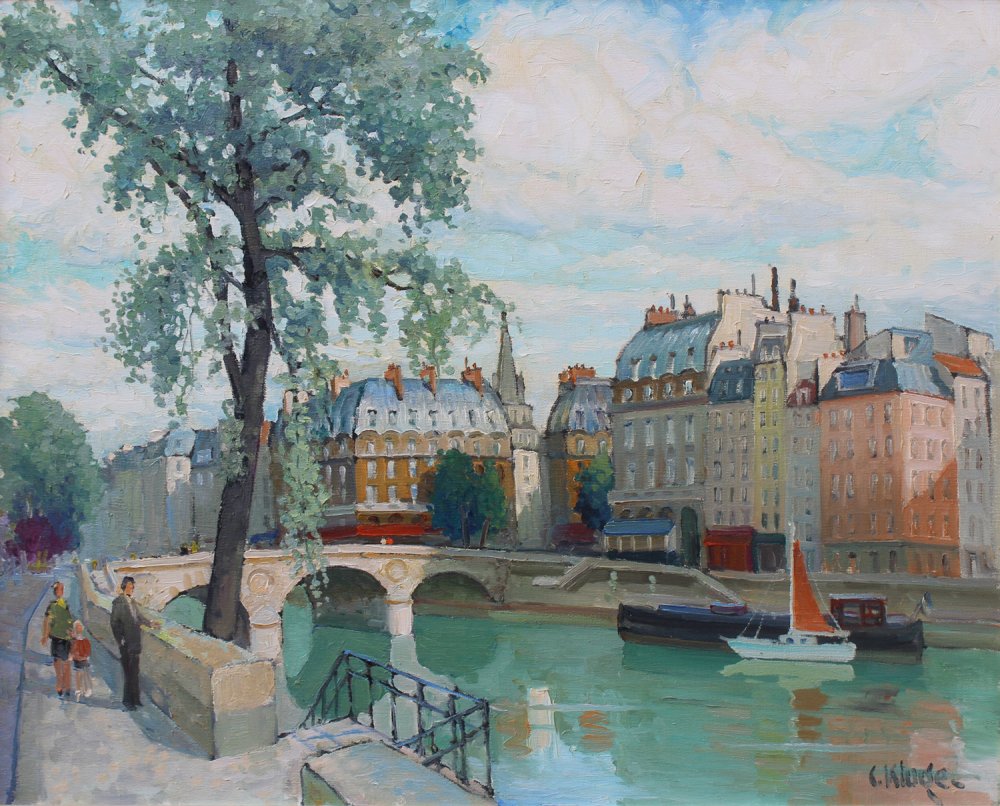 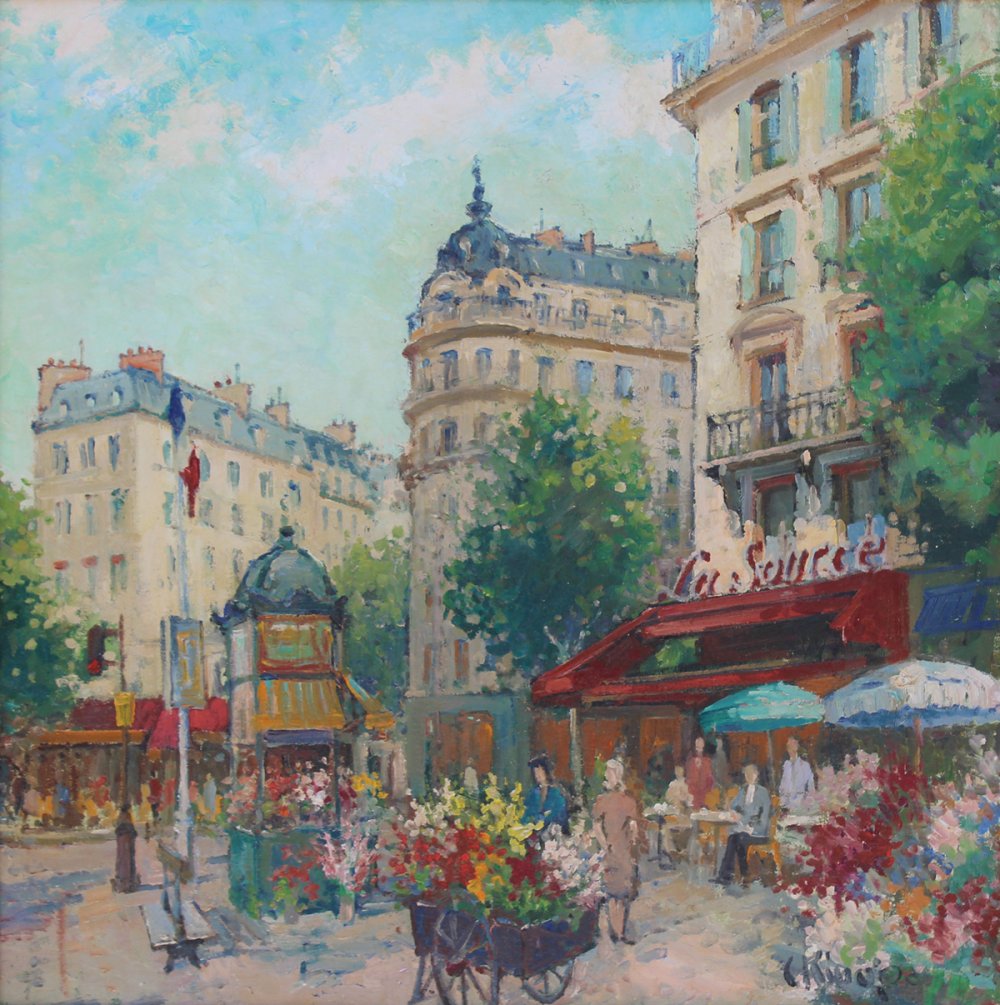 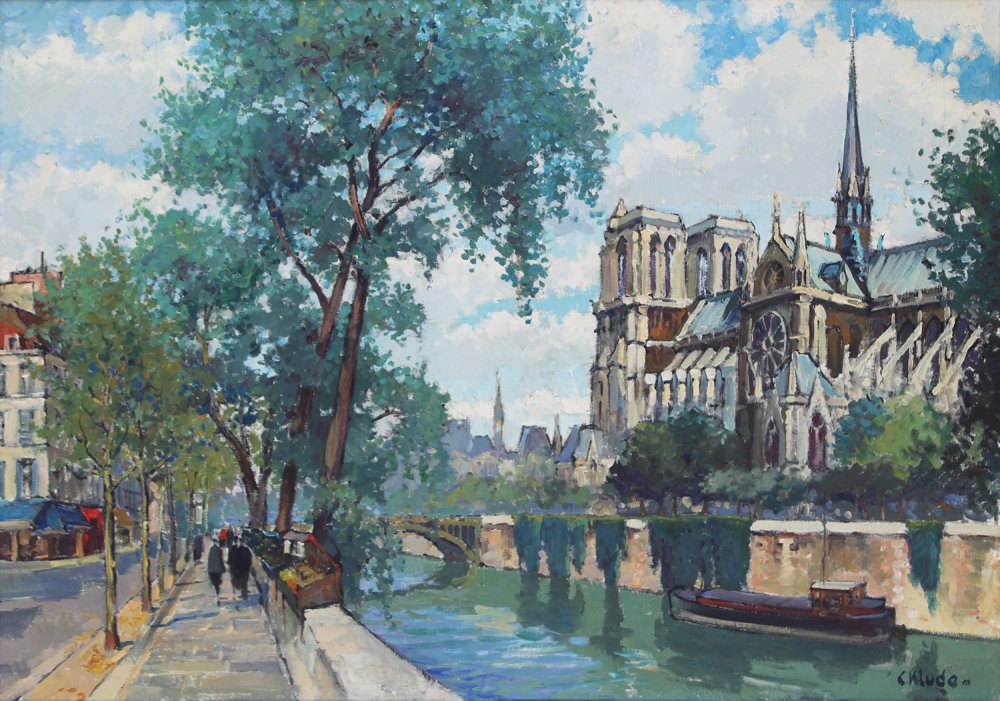 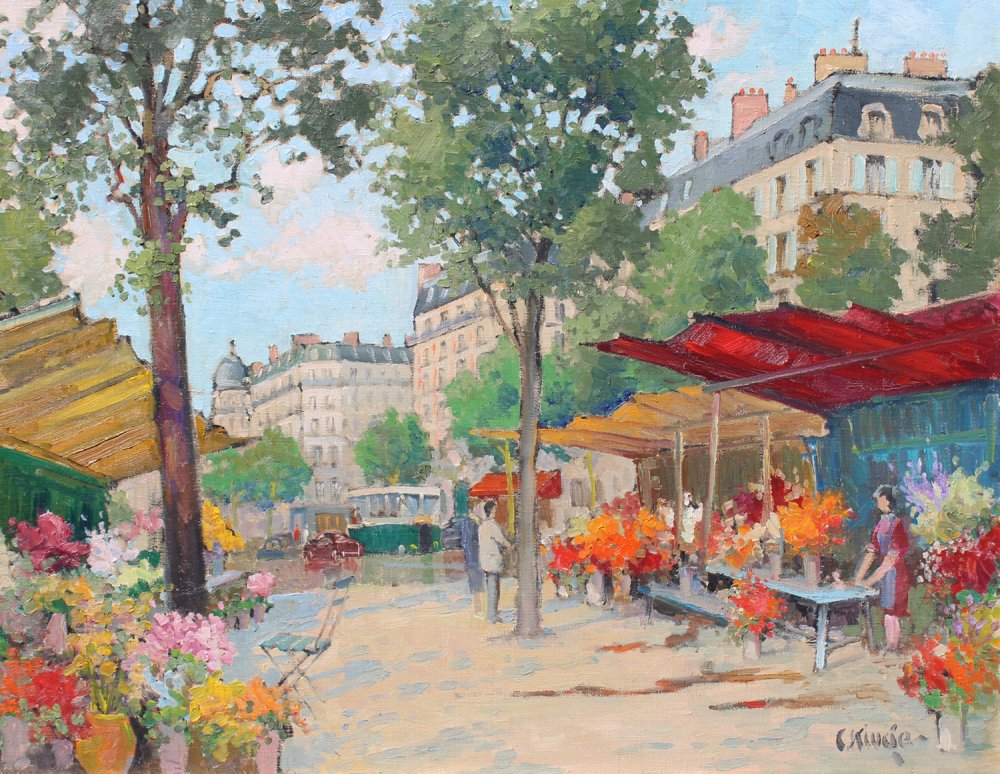 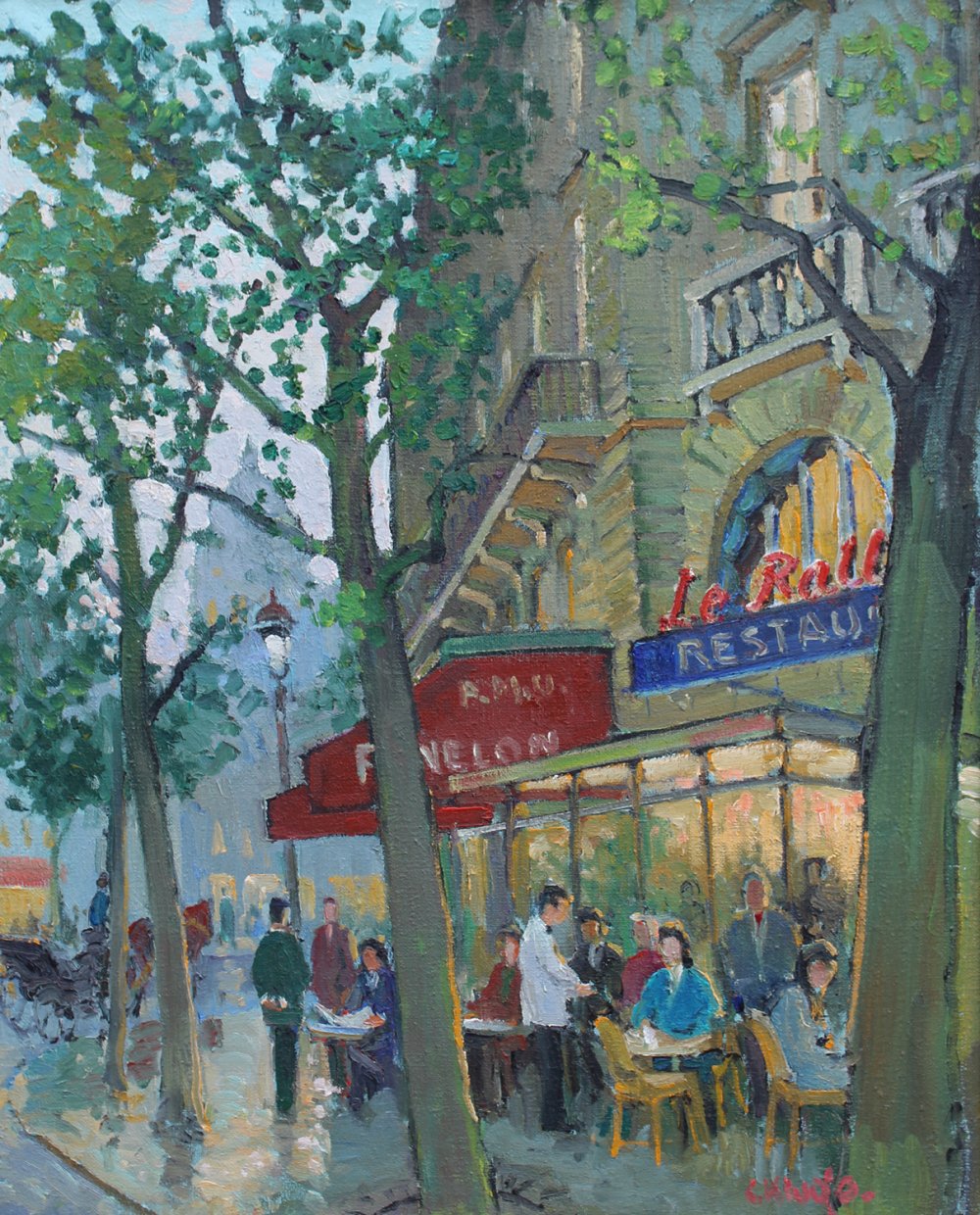 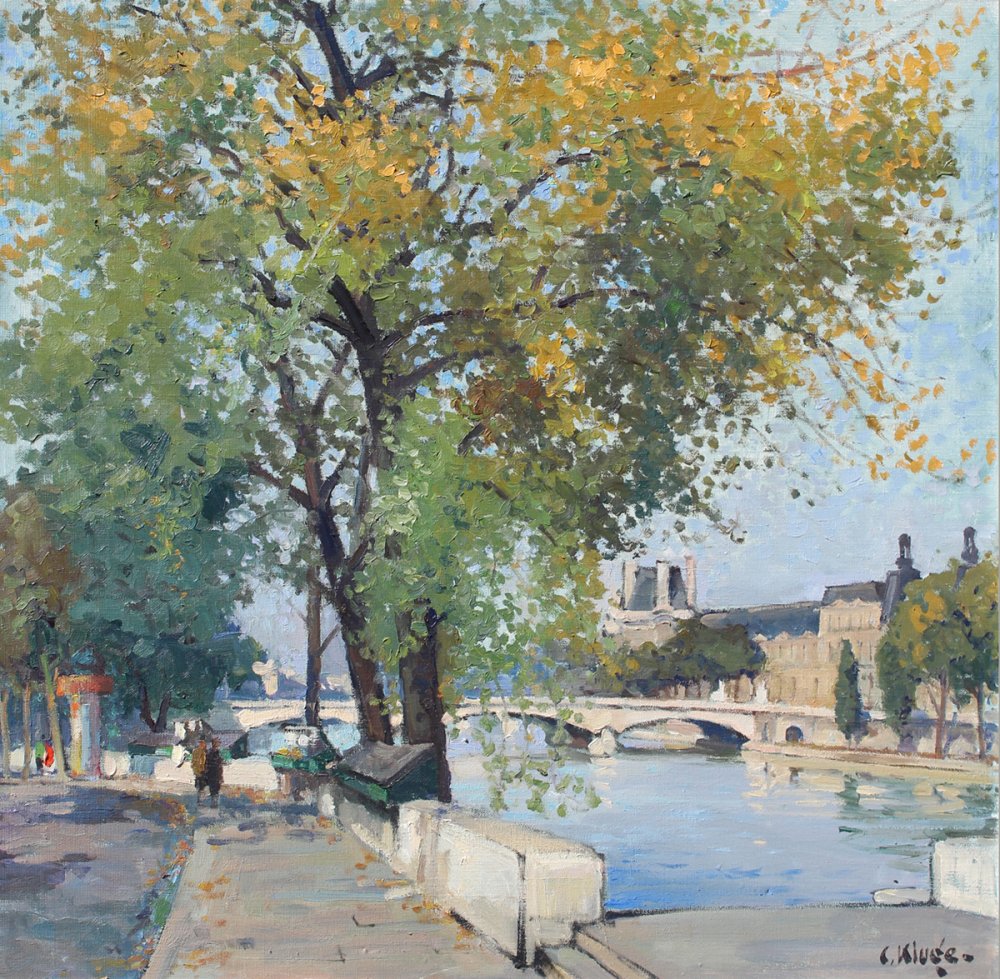 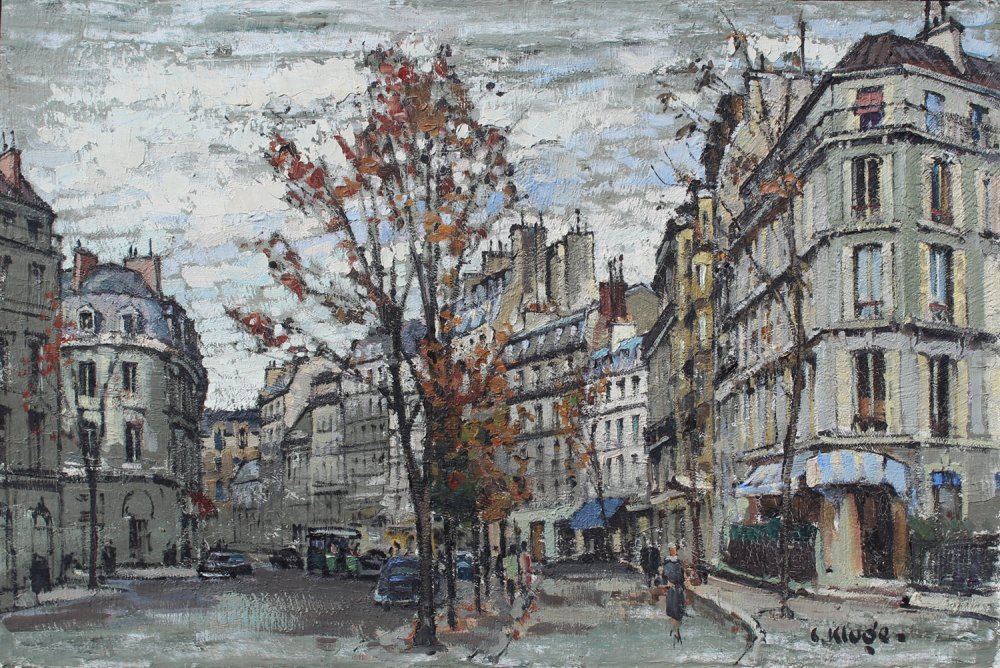 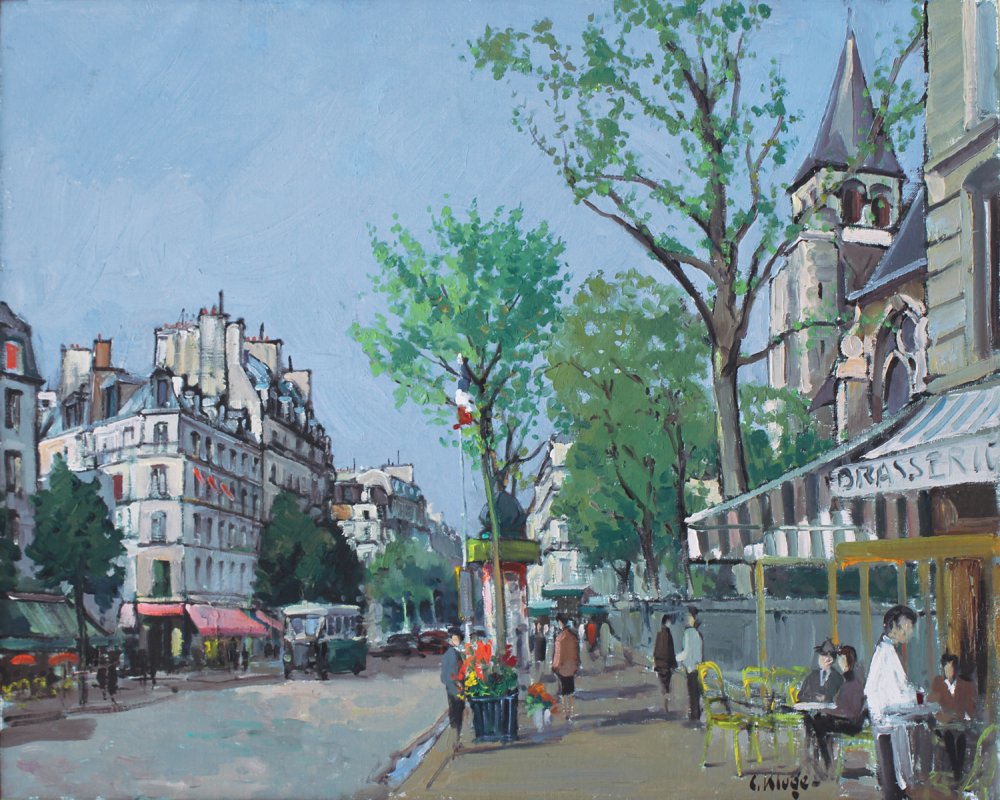 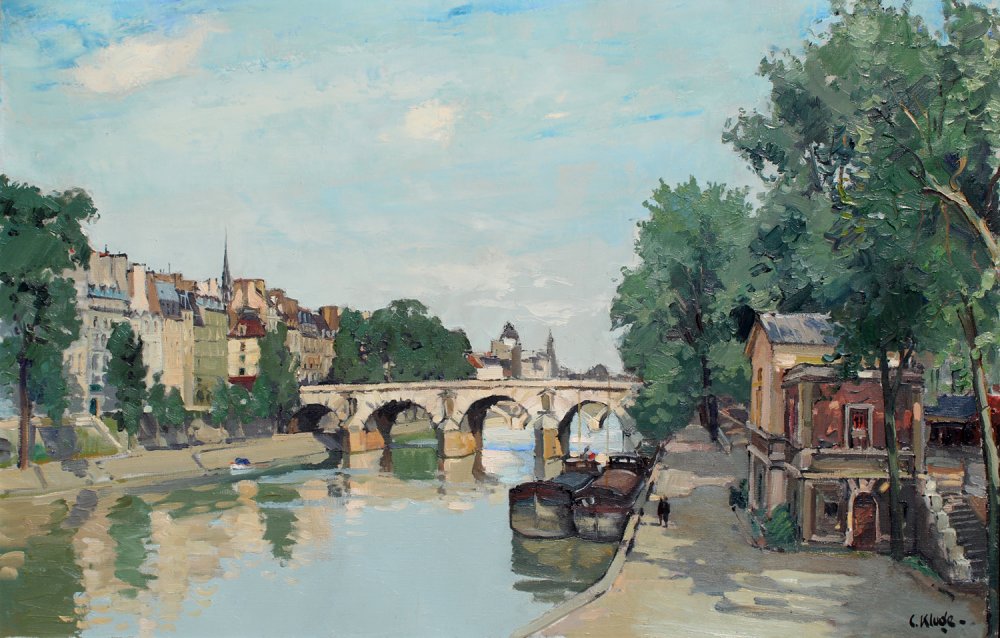 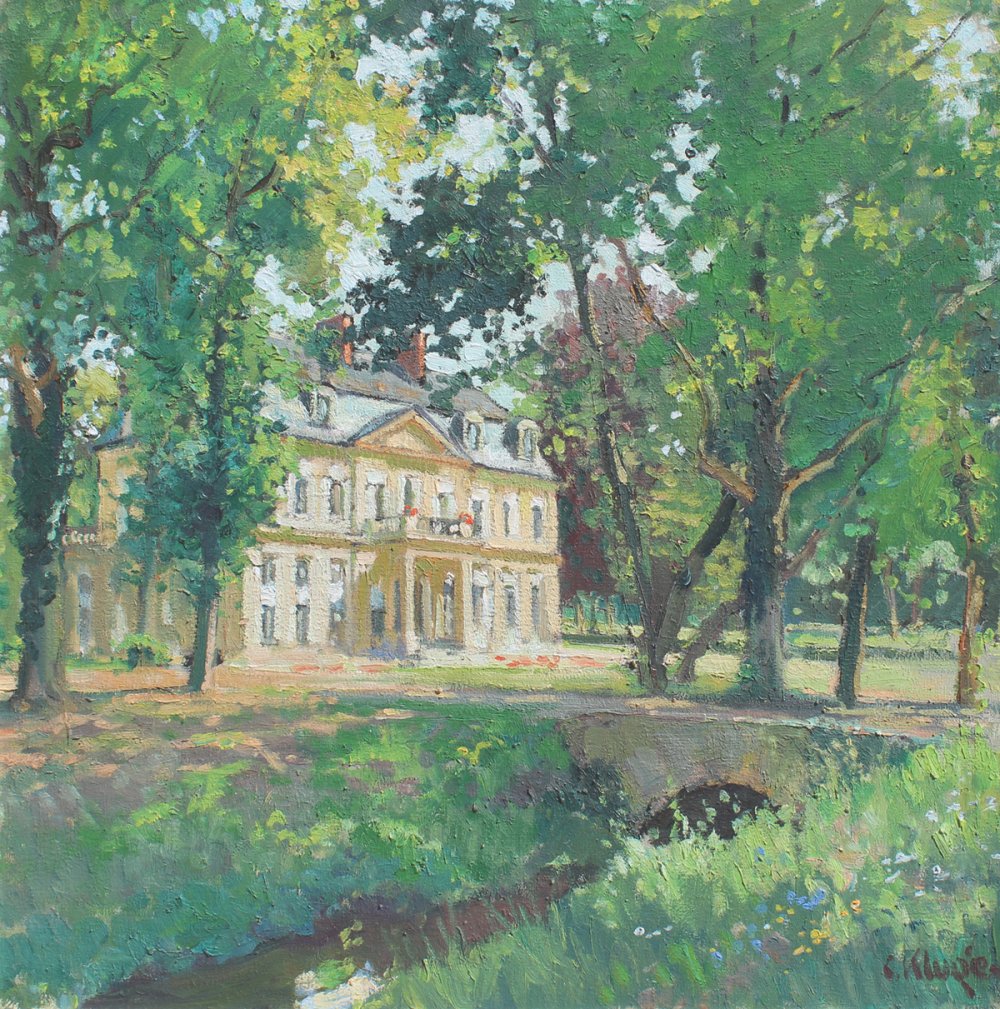 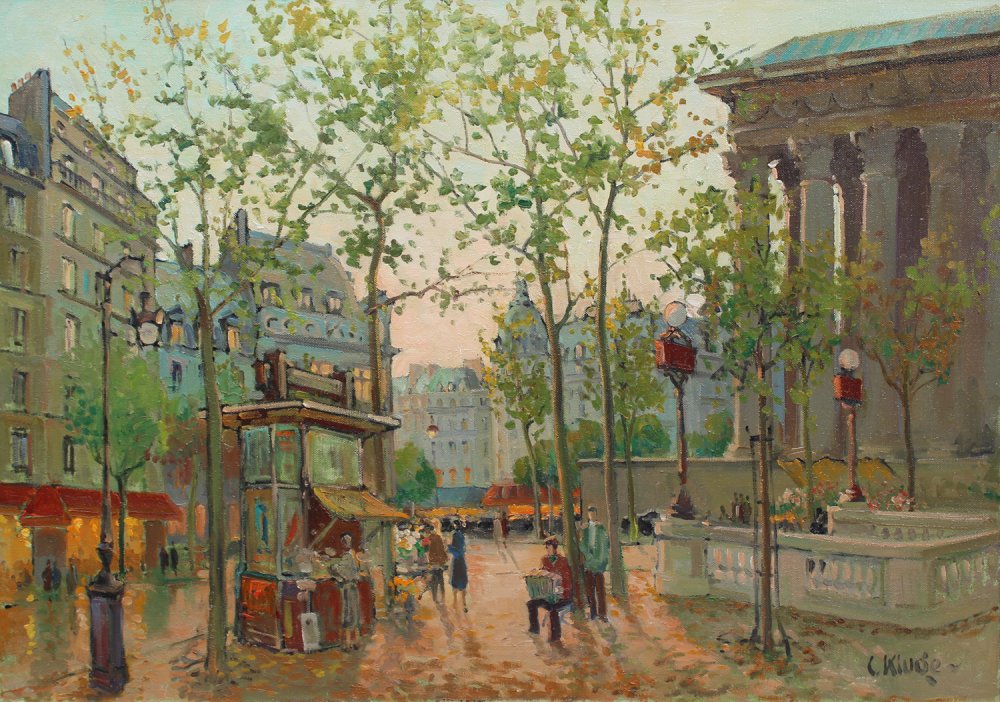 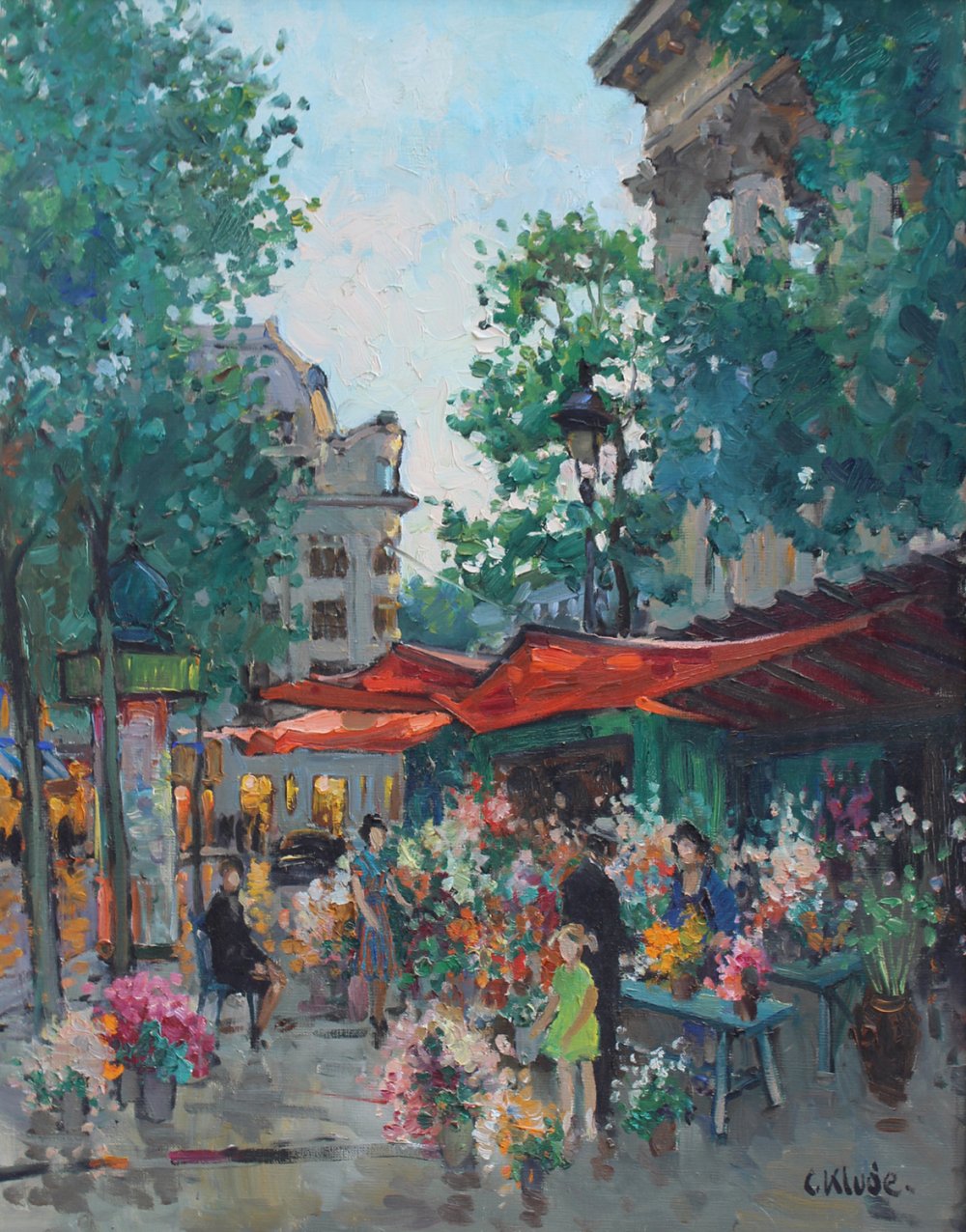 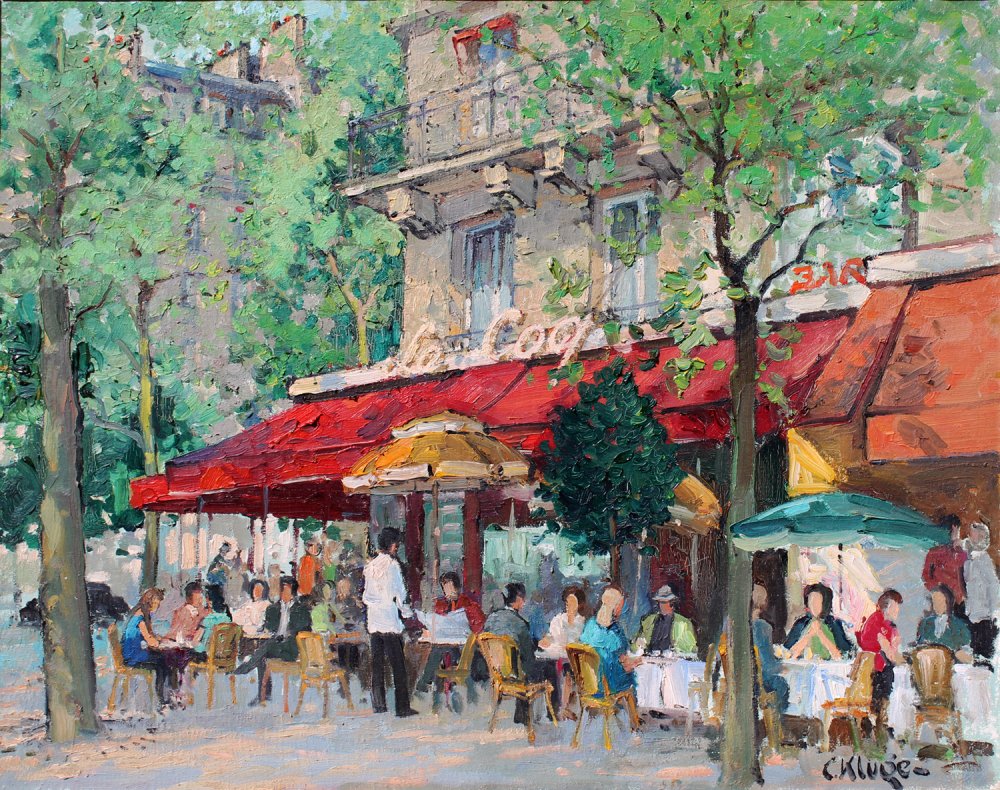 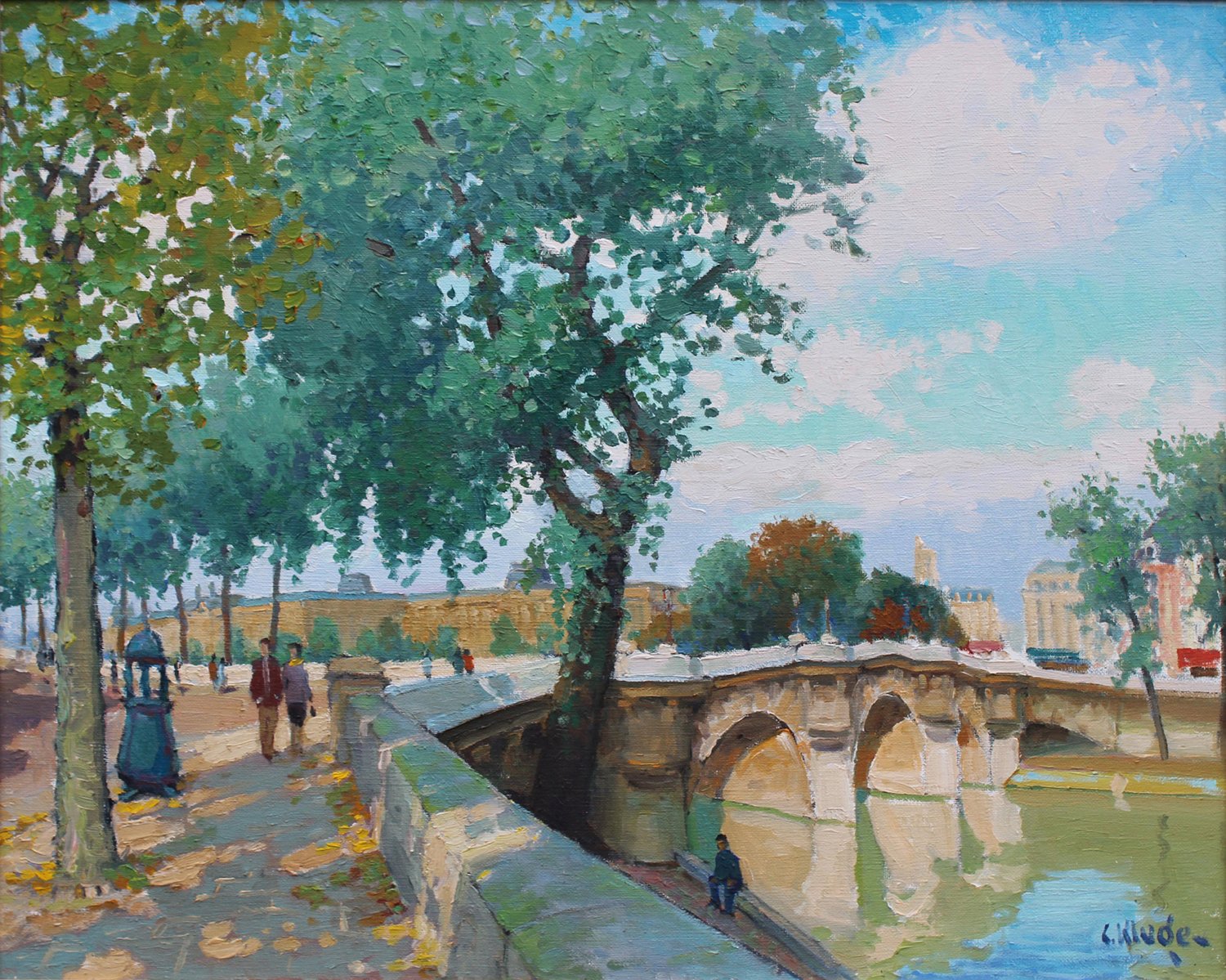 Though born in Riga, Latvia, in 1912, Constantin Kluge grew up in China, spending his adolescent years in Shanghai, where his family was forced to migrate during the Bolshevik Revolution. There, among his studies of Mandarin and the art of calligraphy, Kluge found excitement in visual art as an active member of the Shanghai Art Club. As a young adult, his parents urged him to study something more practical than fine art. Kluge found a compromise in architecture, but it was ultimately his exceptional drawing skill that secured his place at the Ecole des Beaux-Arts as a student of Architecture in 1931. In 1937, he graduated with the title of French Government Architect. His passion for the city of lights grew exponentially during his time there. Kluge was so profoundly moved and deeply in love with the city that he remained for several months after completing his studies. He stayed to paint views of Paris in oils, purely to portray and preserve the scenes he cherished so much.

Kluge returned to China and practiced architecture in Shanghai. After persuasion from friends, he began exhibiting his paintings, which reared great success, to Kluge’s surprise. However, his painting career paused during World War II. Beginning in 1950, Kluge worked as an architect in Hong Kong. Supported fervently by friends and urged by his heart, he returned to his dear Paris due to rumors of the Communist invasion. Unsurprisingly, as an already mature and successful painter, in 1951, Kluge won an award at the Paris Salon. After, he frequently exhibited in the Salon shows, which proved to be his gateway to ever-increasing public attention. Kluge then also became a member of the Sociéte des Artistes Francais and received the Médaille d’Argent and the special Raymond Perreau prize given by the Salon’s Taylor Foundation.

By the late 1950s, Kluge’s paintings caught the eye of the world-renowned art dealer Wally Findlay, Jr., who immediately presented Kluge’s Parisian paintings to the American market and consolidated his stature in Europe. He launched his career in the 1960s with exhibitions in all Findlay Galleries locations, including Paris, New York, Palm Beach, Chicago, and Beverly Hills. Today, Kluge’s estate is exclusively represented by Findlay Galleries after more than 60 years of representation, and his works are a highlight of the gallery’s roster of highly valued artists. In 1990, after many critically successful years, French president François Mitterand awarded Kluge the highest French order of merit for military and civil merits, Chevalier de la Légion D’Honneur. Throughout the nineties and until his passing in 2003, Kluge continued to paint Paris’s poetic landscapes and exhibit his renowned and masterfully detailed paintings at the Findlay Galleries worldwide.

Each Kluge painting is a love letter to Paris and its inhabitants. In the iconic streets, buildings, and public landmarks of Paris, Kluge found his paintings’ true protagonists. It was from those elements that he both understood and captured the spirit of the city. He painted Paris and its environs as a cherished memory, as an iconic moment in time, as a treasure for everyone to enjoy and have a part of.

Kluge’s relationship with buildings and structures began long before his painting career. He was a student of architecture at the Ecole des Beaux-Arts and worked as an architect for several years before dedicating himself to painting full-time. His intimate understanding of a Parisian building’s anatomy gave him the insight to depict them with a unique combination of fidelity and charm. Kluge imbued his buildings with as much life as any other artist might give to figures. To him, they are ultimately living structures, aging with the years and changing with the light of day. Kluge knew that each detail told a piece of the story.

Kluge once said, “When I was 18, my professor told me that the only way to paint a good portrait of a pretty woman is to, previously, fall in love with her. Be that as it may, years have gone by, and fate led me to paint Paris. Whenever it happens, I notice that the moment I start painting, preferably the banks of the Seine with antique structures reflected in its slowly gliding flow, I find myself whistling or humming some happy tune, while all the daily stress would vanish from my subconscious mind leaving me guessing at such a fortunate change of my mood. Could it be that I am permanently in love with Paris? My professor, back in China, never told me about anything like that.”

In Kluge’s work, each element is given balance and space to tell its own part of the story. The sky is given ample room to provide an uninterrupted display of summer clouds or winter hues. Every reflection of light, from a tree leaf to a boutique facade, is given as much voice as architectural details in a beloved Parisian bridge. There is balance and harmony in each composition supported by a beautifully crafted foundation made of precise proportions, perspective, and form.

Kluge’s works carry enough honesty to evoke nostalgia, and equally enough beauty to evoke fantasy. He achieves excellent nuance without becoming overly formal. Paris’s magic is evident in his oeuvre; the scenes could be found in an architectural review book or one’s family album; they are the vistas everyone wants to savor and remember. Art historian, Raymond Charment referred to Kluge’s paintings as, “A calm mirror, a beautiful clear lake, where the appearances of the world are reflected in their permanent and always comprehensible form.” It is precisely Kluge’s ability to tell the real story while so delicately emphasizing its beauty that makes his work timeless.