Conrad Shawcross: After the Explosion, Before the Collapse

Conrad Shawcross: After the Explosion, Before the Collapse

Victoria Miro is presents an exhibition of new works by Conrad Shawcross. After the Explosion, Before the Collapse marks a significant development of the artist’s Paradigm sculptures and features two new mechanical works in addition to a unique new sequence of photographic prints created by firing a laser through a series of faults in glass fragments. 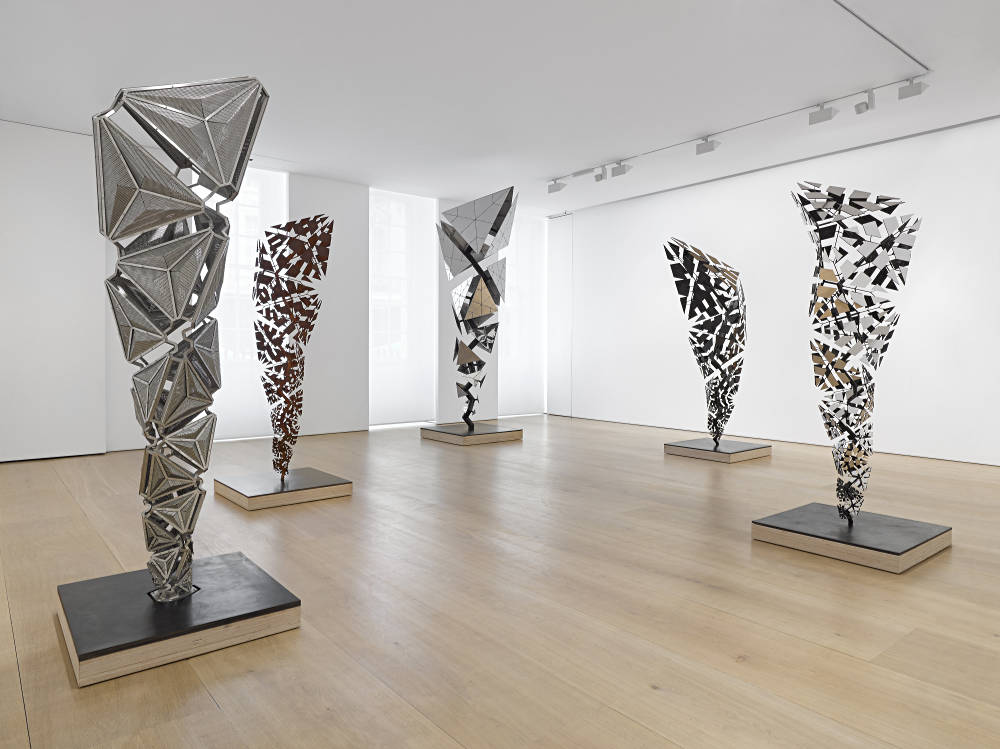 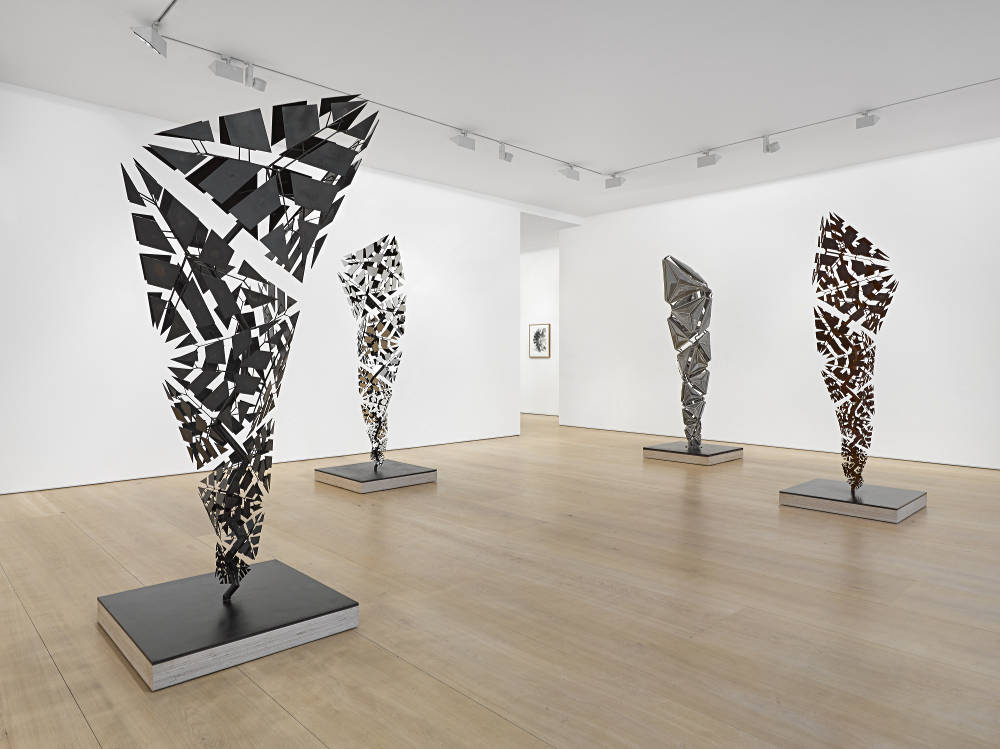 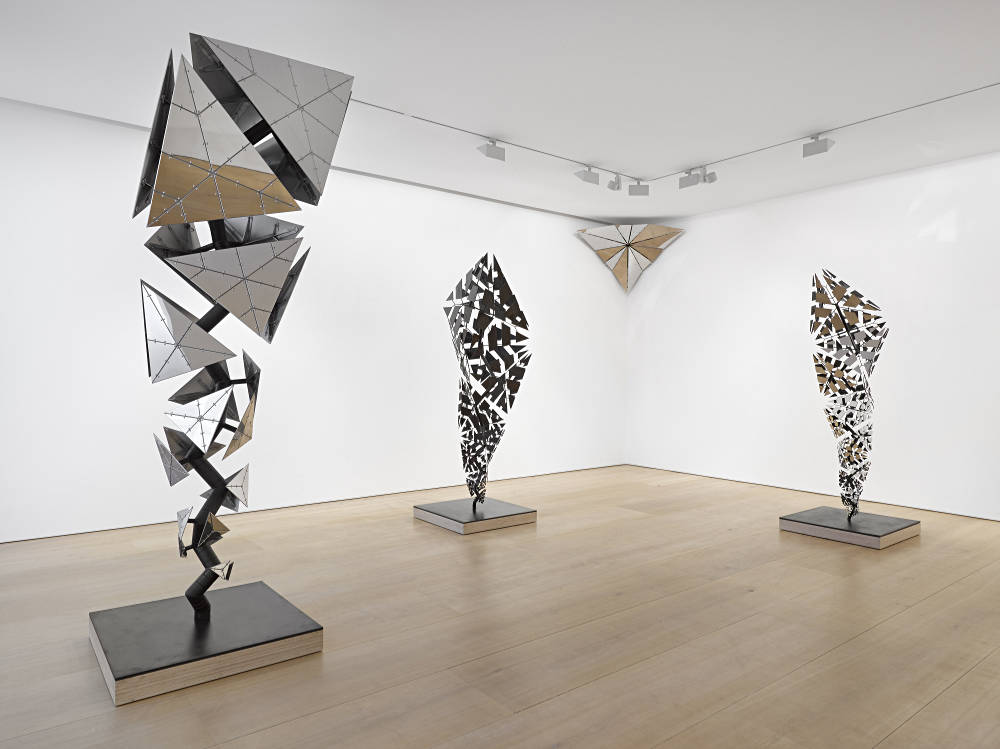 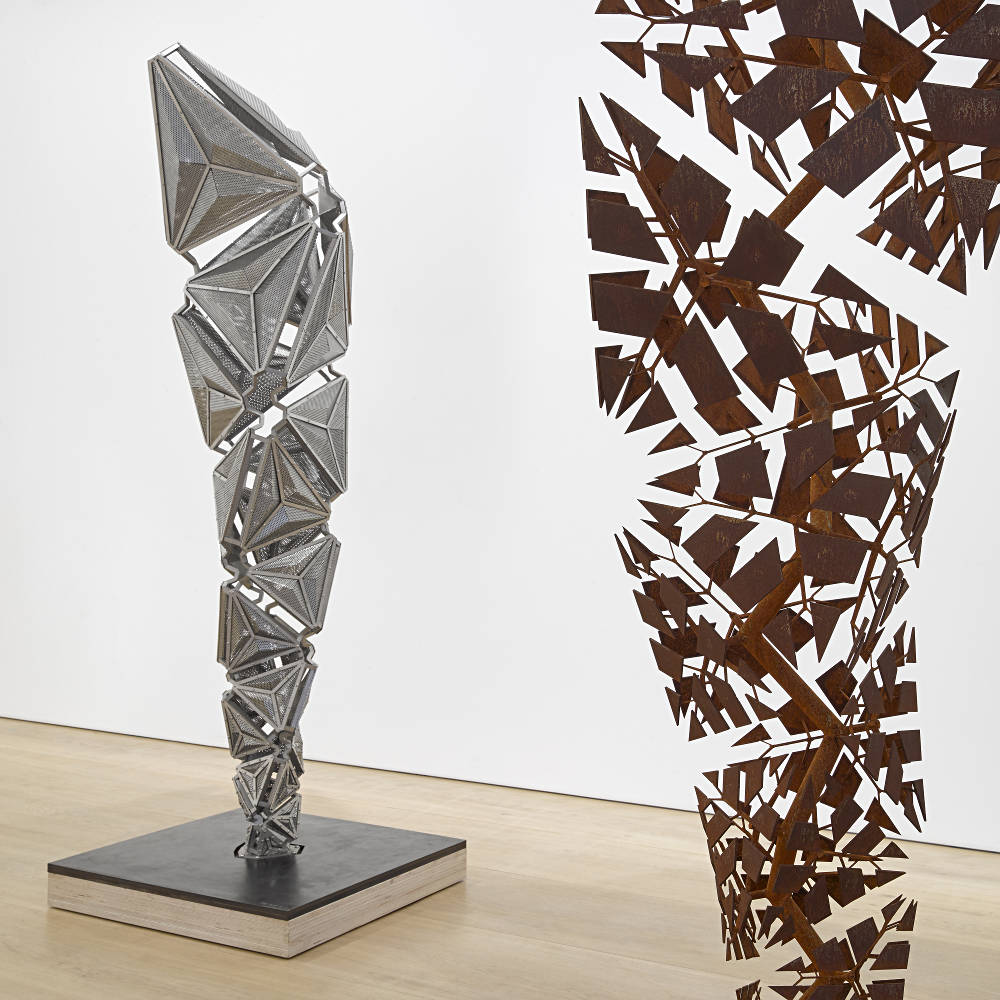 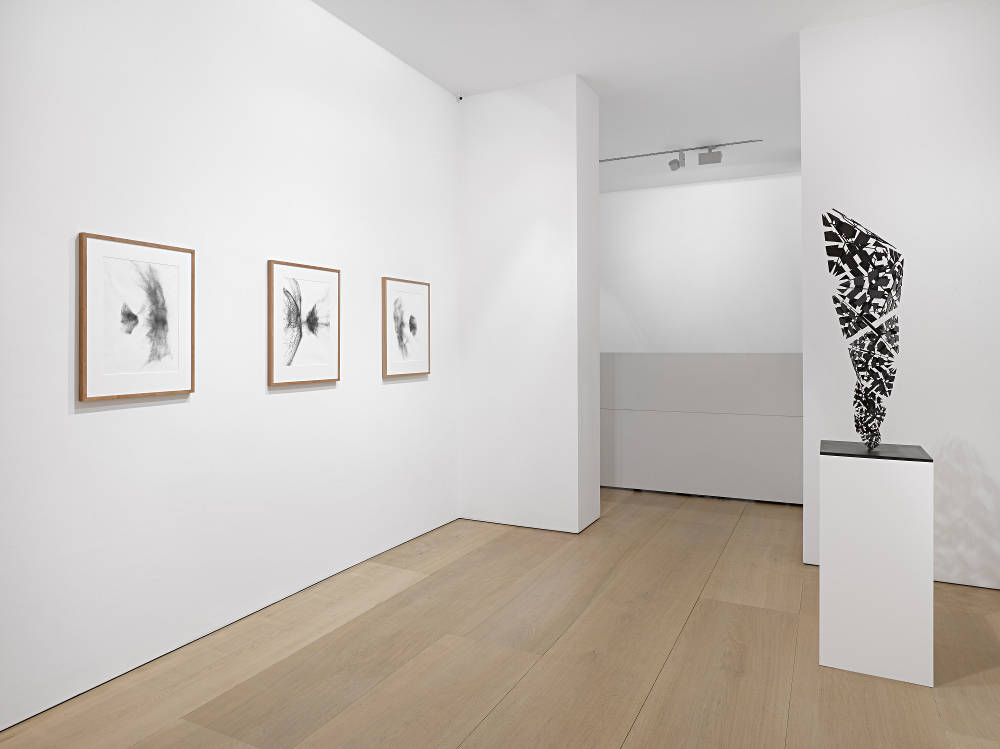 United by an aesthetic akin to that of scientific models, the abstract works continue to deal with notions of time, entropy and disappearance.

Conrad Shawcross’s Paradigms are an ongoing exploration of the tetrahedron, geometrically a four-sided non-tessellating form and conceptually the symbol of an indivisible unit of matter. As a building block, the tetrahedron behaves as an irrational number, creating sequences that in theory, extend into infinity without repetition. Major examples include Paradigm, 2016, a permanent installation commissioned by the Francis Crick Institute in King’s Cross, which is one of the tallest public sculptures in central London. The title of the works refers to the notion of the paradigm shift – a leap of imagination that jolts scientific enquiry forwards and collapses pre-existing notions of what is true – identified by the American physicist and philosopher Thomas Kuhn (1922–1996).

The previous series of Paradigms embody the epistemological metaphor of the ascending stack and display a visceral physicality. By contrast, the latest sculptures are far more ethereal, and seem to almost disappear as they rise up and expand. While strikingly distinct both conceptually and aesthetically, the new works still obey the same geometric parameters and constraints and, as a result, the new forms contain a central helical stem. The twisting spine supports a series of branches which in turn support hundreds of fragments that as a whole echo the once solid surface of the Paradigm skin. For Shawcross, an aesthetic of the designed, scientific and the rational serves as a device to cloak more poetic, philosophical and metaphysical themes, which are foregrounded in these new works. A variety of surfaces and materials articulate the field array; dark surfaces counterpoint the reflective or semi-transparent skin to create interference and disruptive reactions to light, all of which further accentuate feelings of dissolution and perplexity, drawing viewers into an ever-changing experience as they move among the works.

Speaking about the new Paradigm works, Shawcross notes that ‘A potential way to think of them is as some sort of complex model by a scientist of a mathematician. While they appear to be functional or of rational intent, their meaning remains elusive. They contain a temporal element that seems to convey growth, entropy or collapse. On one side they could represent a complex chemical such as a protein chain or amino acid, but to complicate this interpretation, a strong sense of the passage of time runs through the form. They perhaps capture an instant after an explosion but before the collapse of the system that they chart, like a Muybridge sequence; the story of a complex system and its expansion from birth to death. One of the key ways that scientists talk about time is in the dispersal of heat, that time is defined by energy dissipating. In this way, these new works also contain a sense of expansion or a loss of heat, which in turn relates to the expansion of the universe and its possible contraction. This preoccupation aligns with the concerns of my previous works, such as the early rope machines.’

Placed above the new Paradigms is Folding Shield, 2018, a new mechanical work that, displayed in a corner of the gallery, slowly folds in on itself, its mirrored, petal-like surfaces creating an incrementally changing and destabilising view of the gallery and the other works contained within it. Displayed in the gallery window, Optoscope, 2018, is the culmination of years of investigation into interference and disrupted surfaces created through a moiré pattern. Two perforated surfaces come in and out of phase to create a shifting pattern that appears almost holographic as it swarms and evolves, reacting to the movements of viewers passing by and the changing play of light upon it. The work makes use of similar techniques developed in sculptures such as Optic Labyrinth (Arrangement I), on display as part of Frieze Sculpture 2018.

Referring to the term for a defect in a lens Aberrations are a new series of unique prints created by exposing traditional photographic paper to the beam of a laser after it has passed through a fragment of glass. Usually considered a thing to be avoided at all costs, Shawcross has deliberately sought to find these unwanted faults and projected the shadow of them onto the paper, akin to Dorothy Hodgkin’s early crystal radiography experiments and Man Ray’s rayographs. The Aberrations point to the creative potential of failed or imperfect models as art, just as Shawcross’s use of failed or ambiguous models and machines throughout his career has been informed not by failure per se but by our capacity to perceive. In tandem, materials more commonly associated with bulk, mass and inflexibility, become in the artist’s hands characterised by apparent delicacy and increasingly mercurial in appearance, in the process acting as vehicles for some of our most enduring questions about our place in the universe.

A substantial new book, focusing on key themes in Shawcross’s art and detailing many of his most ambitious public projects to date, will be published by Elephant Publishing on October 4 during Frieze London.