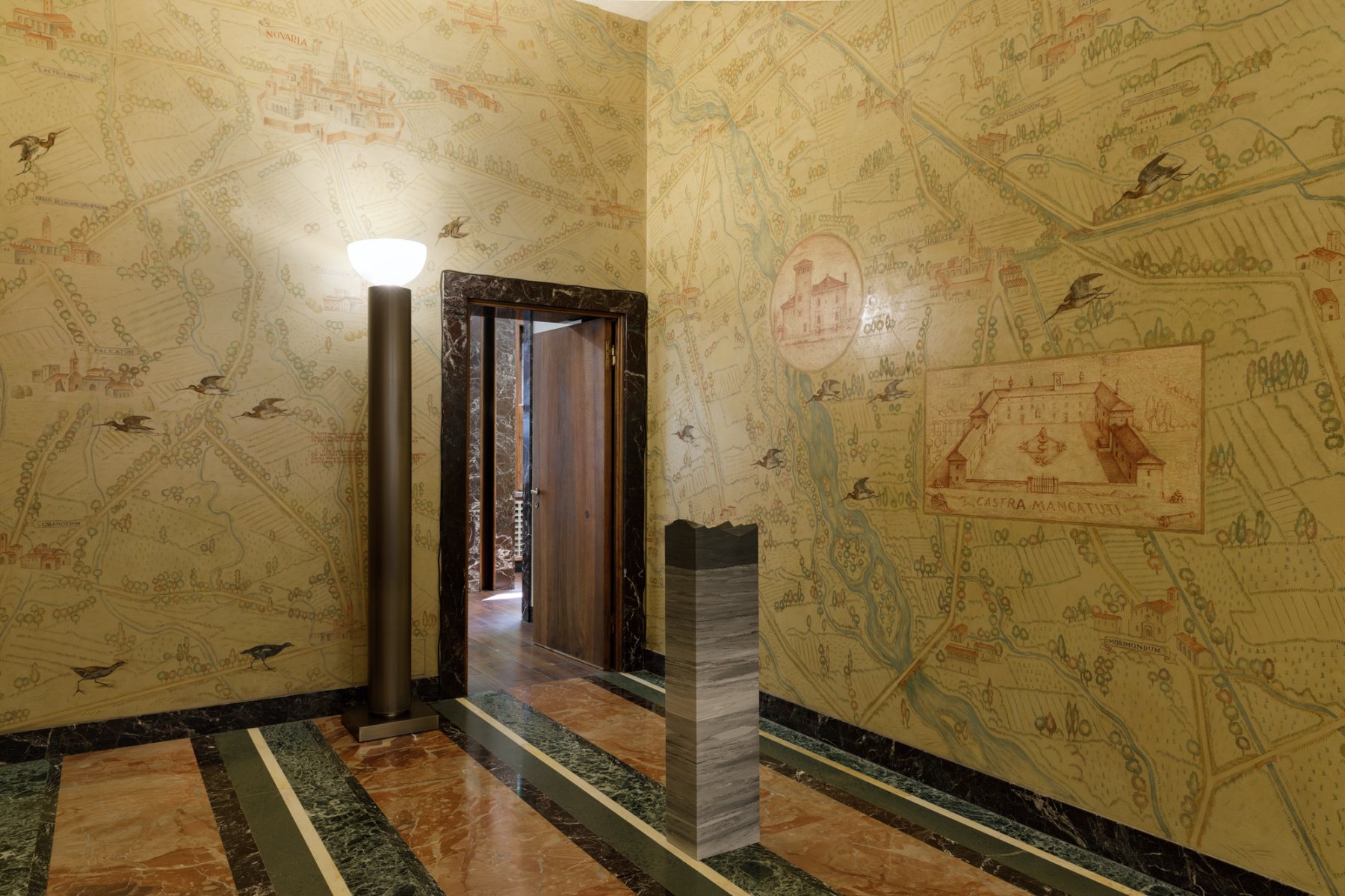 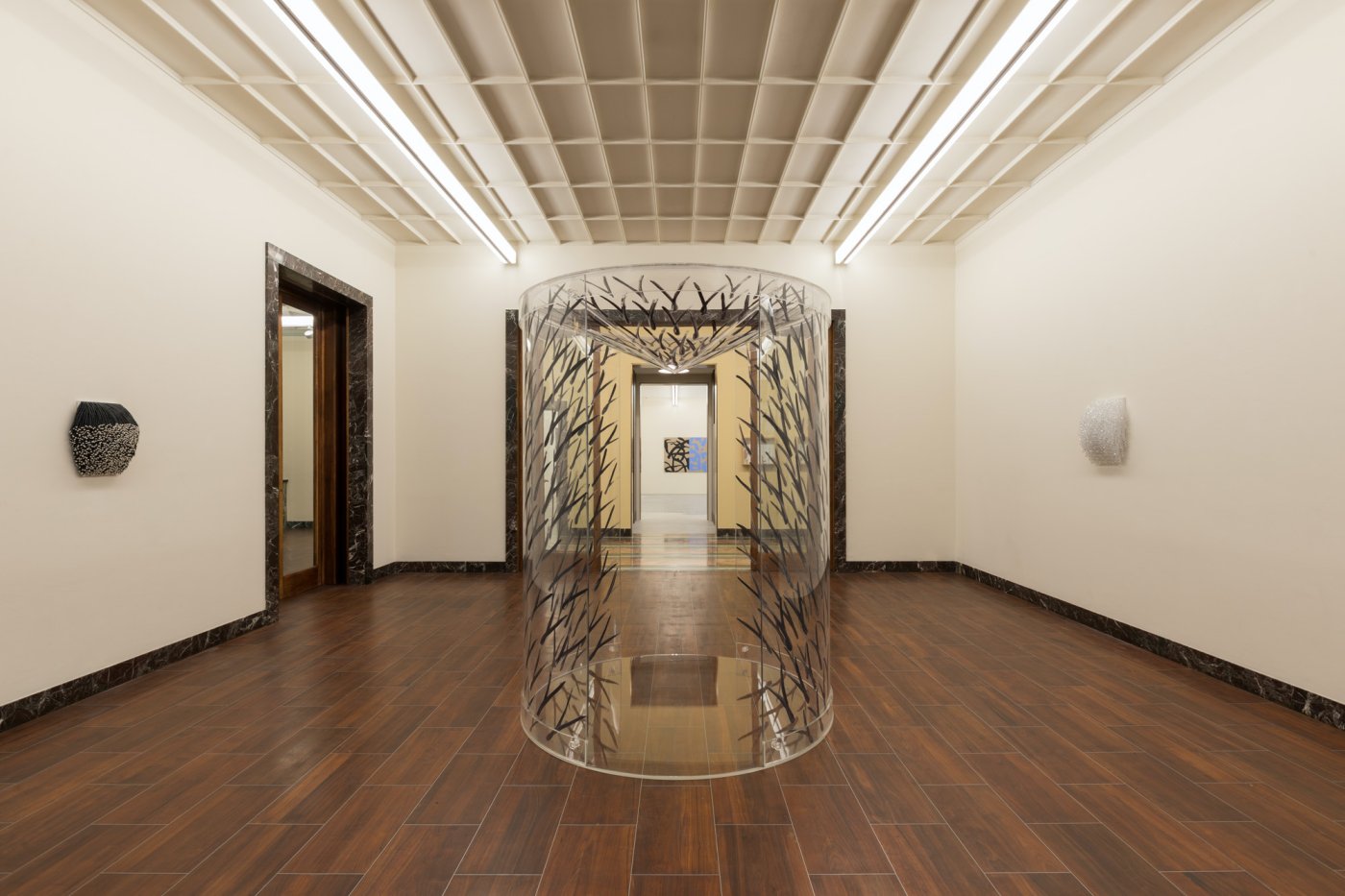 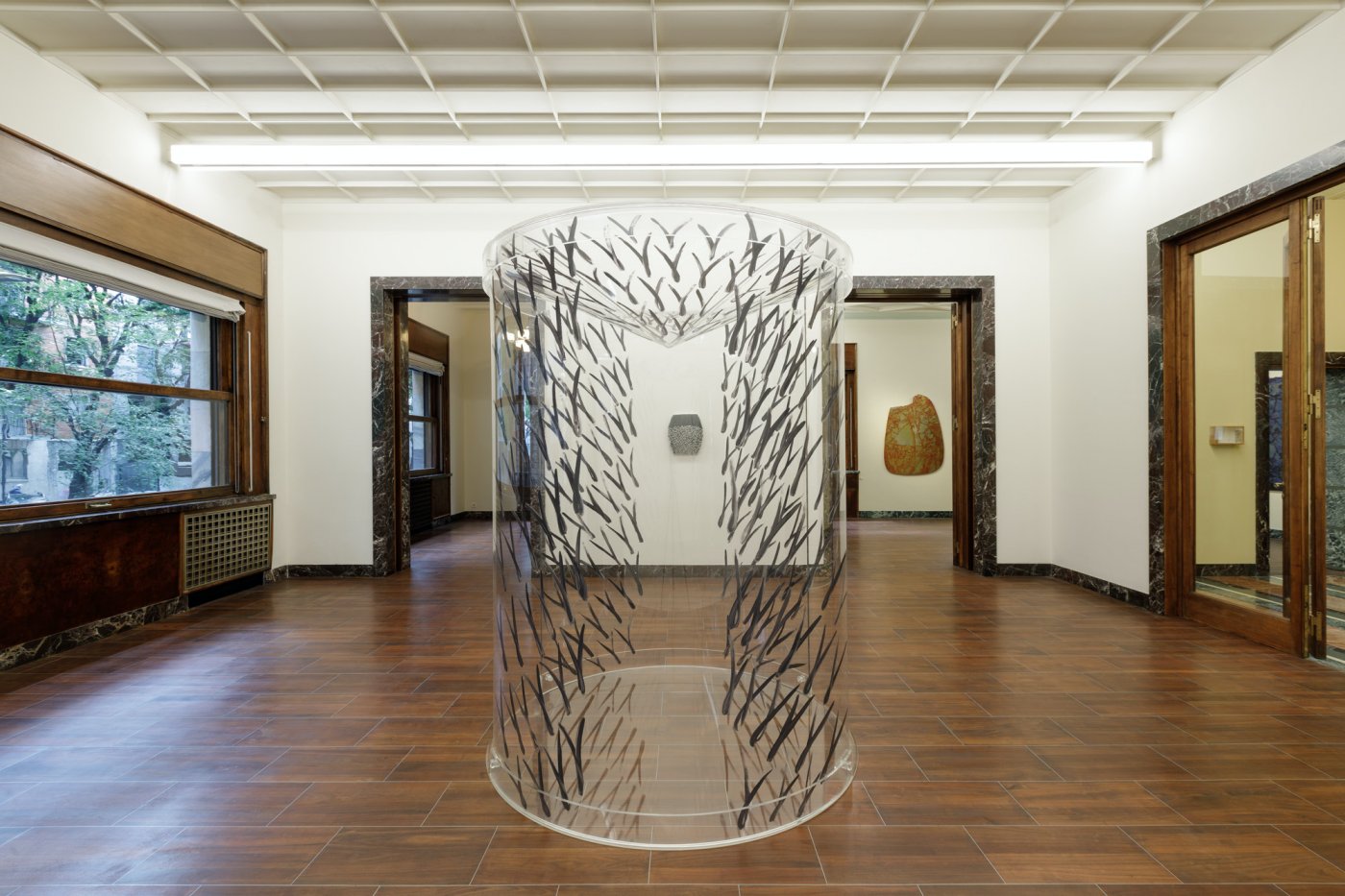 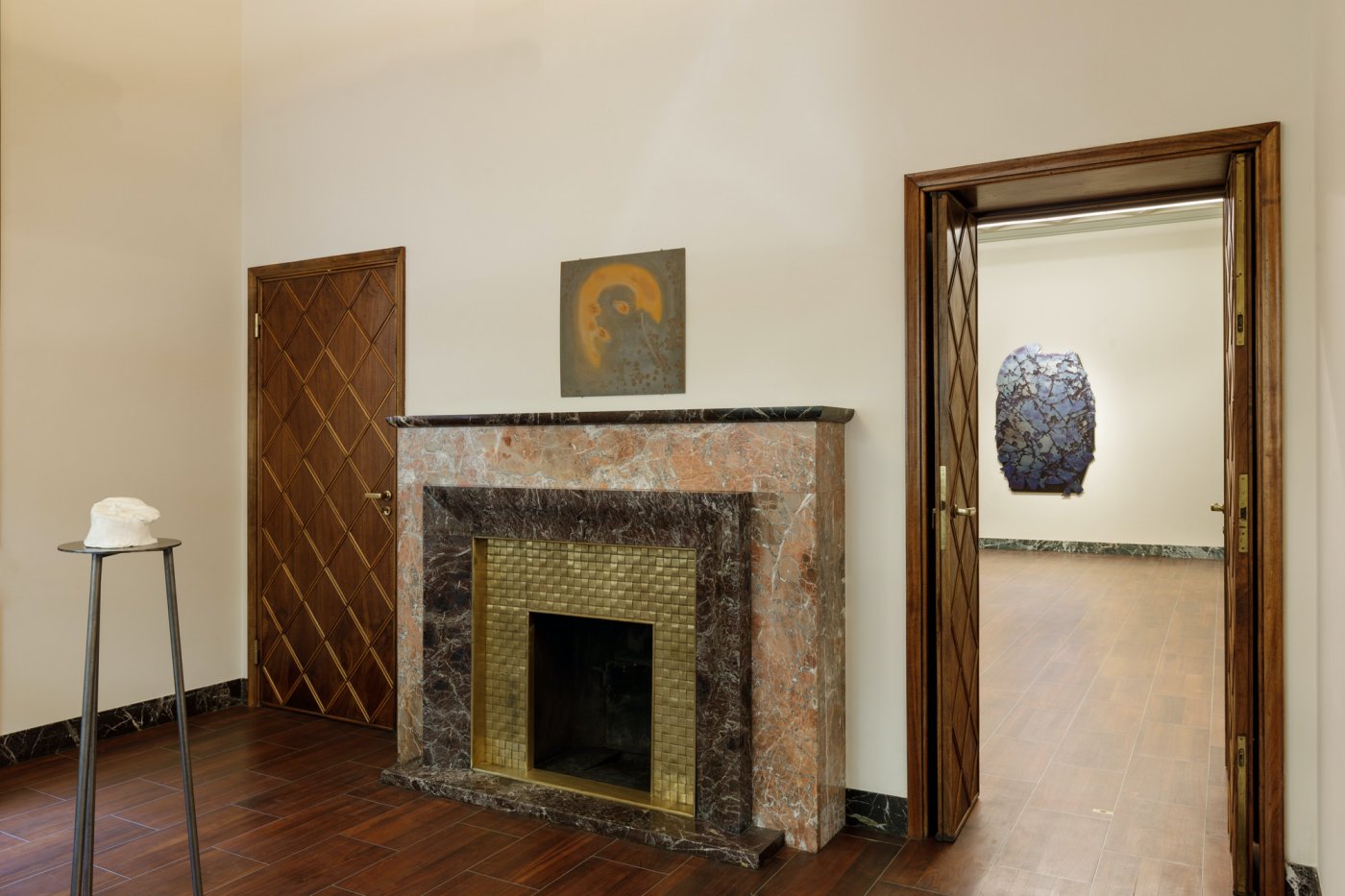 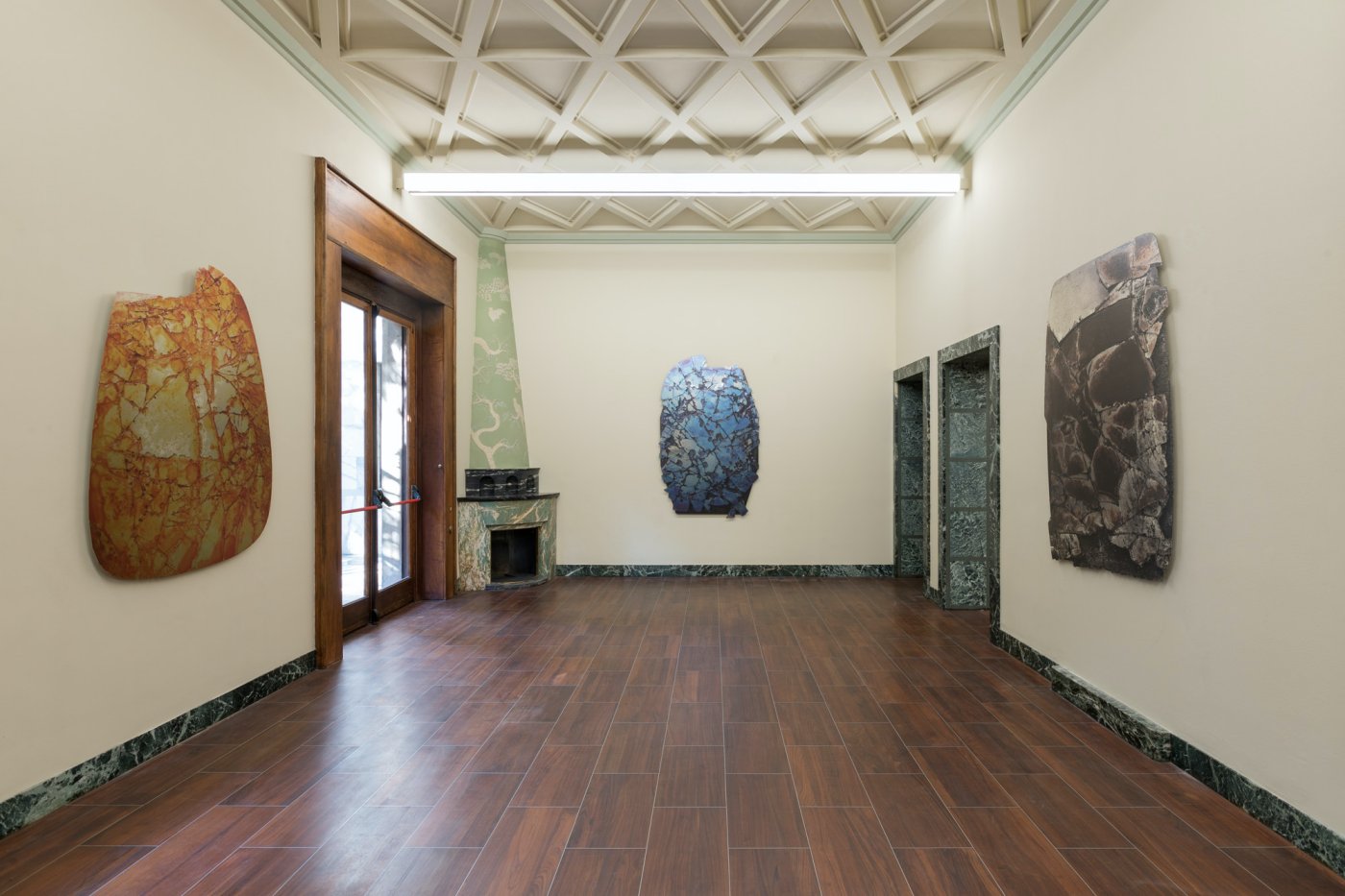 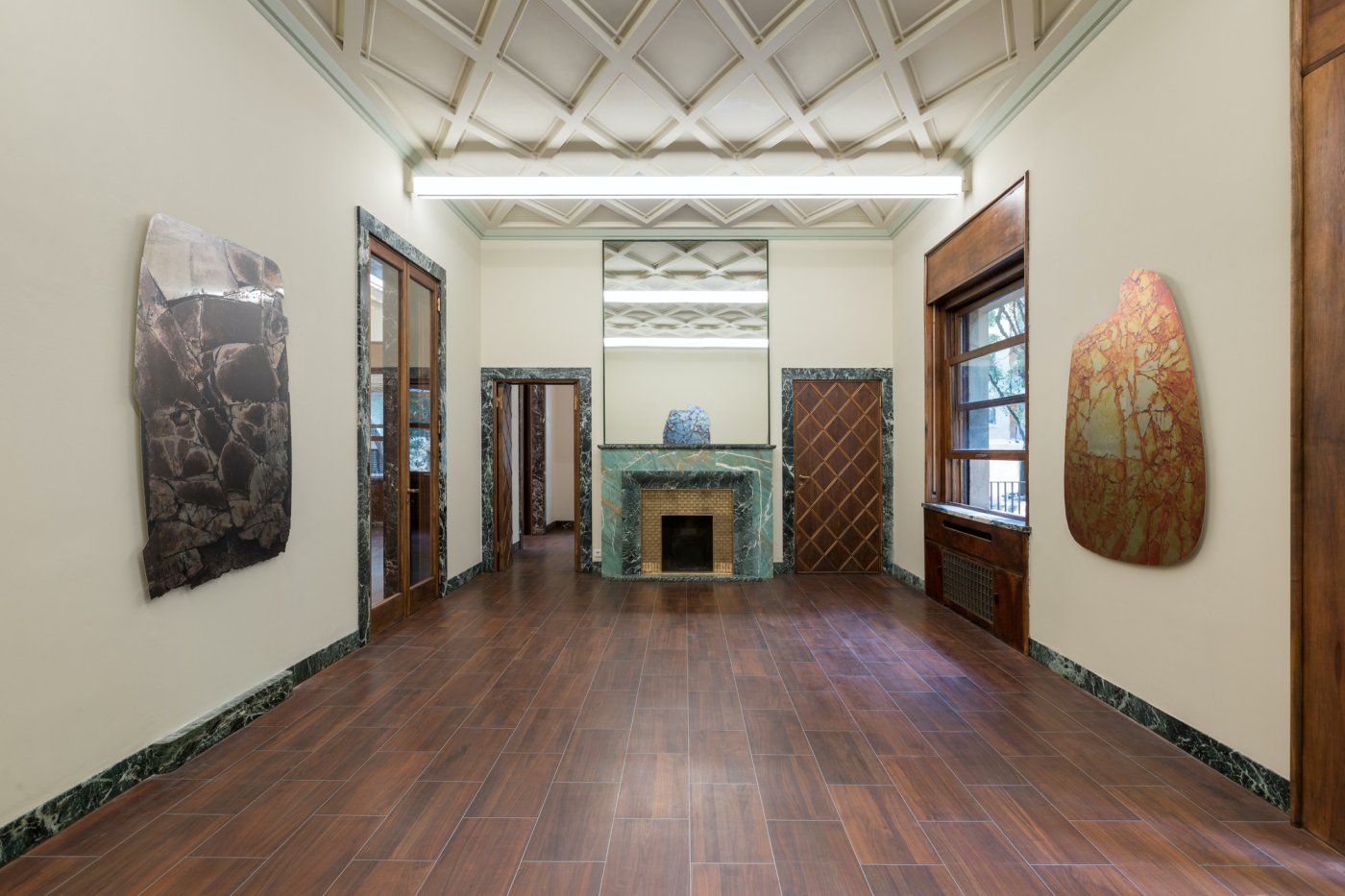 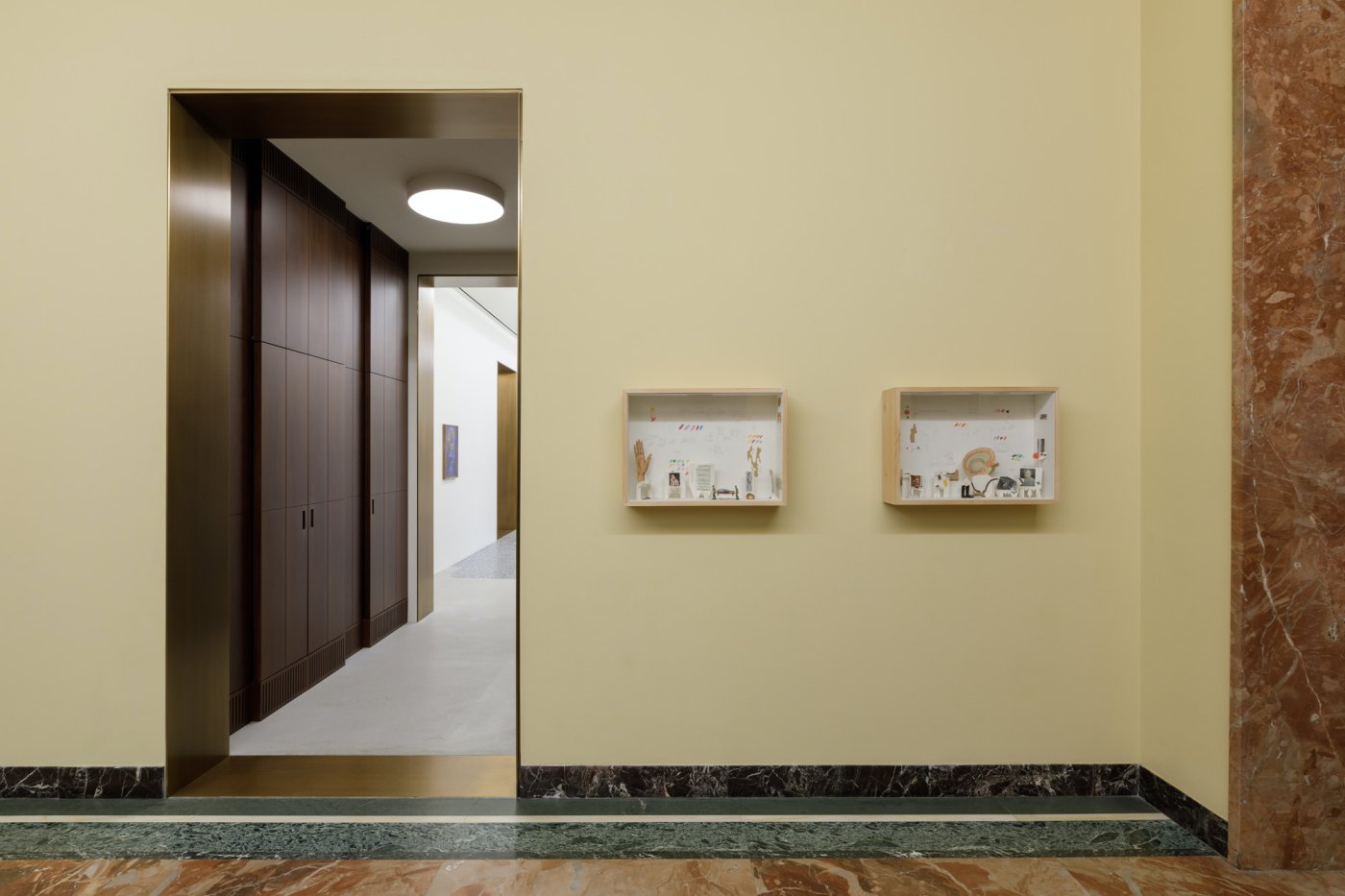 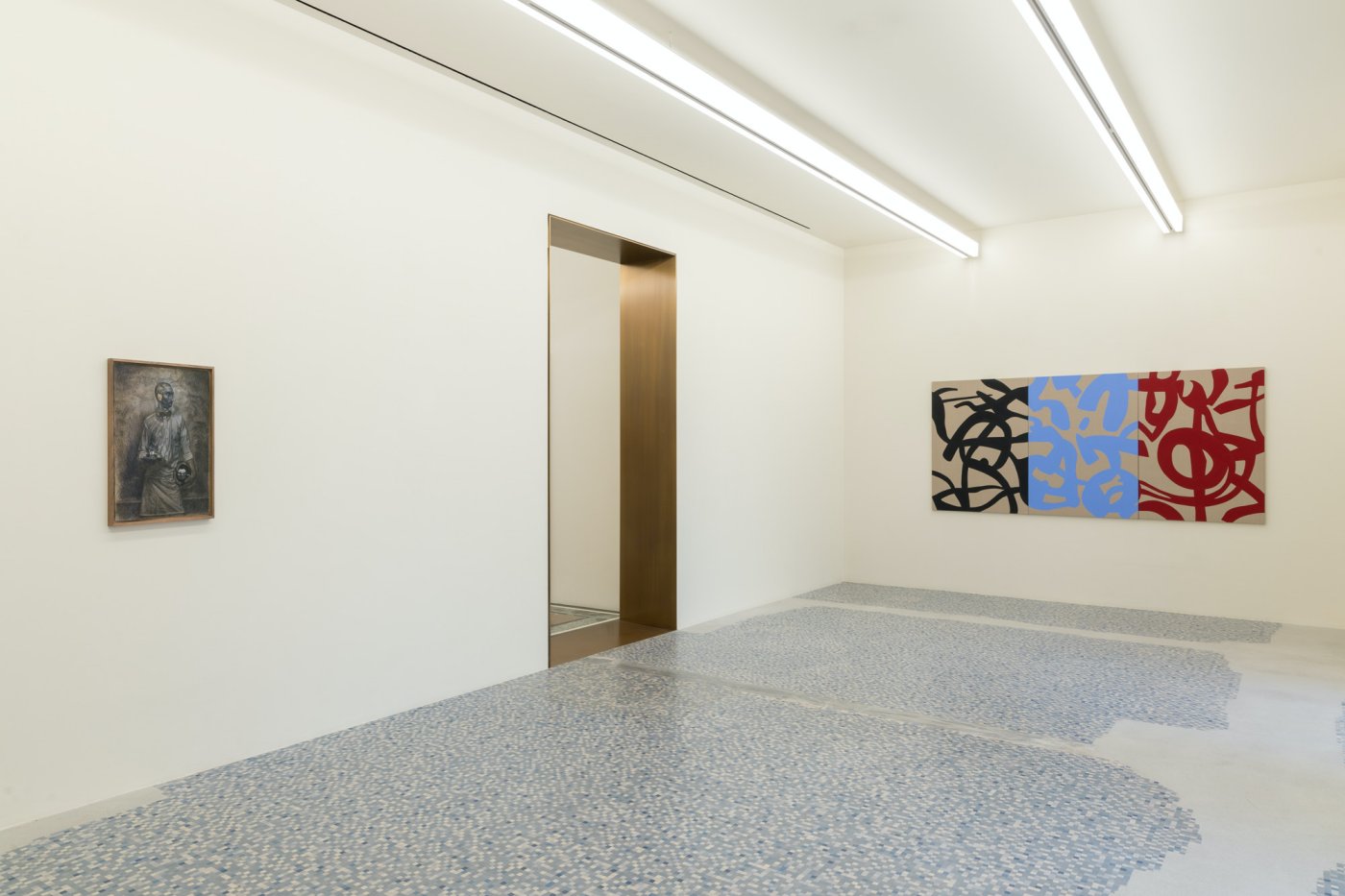 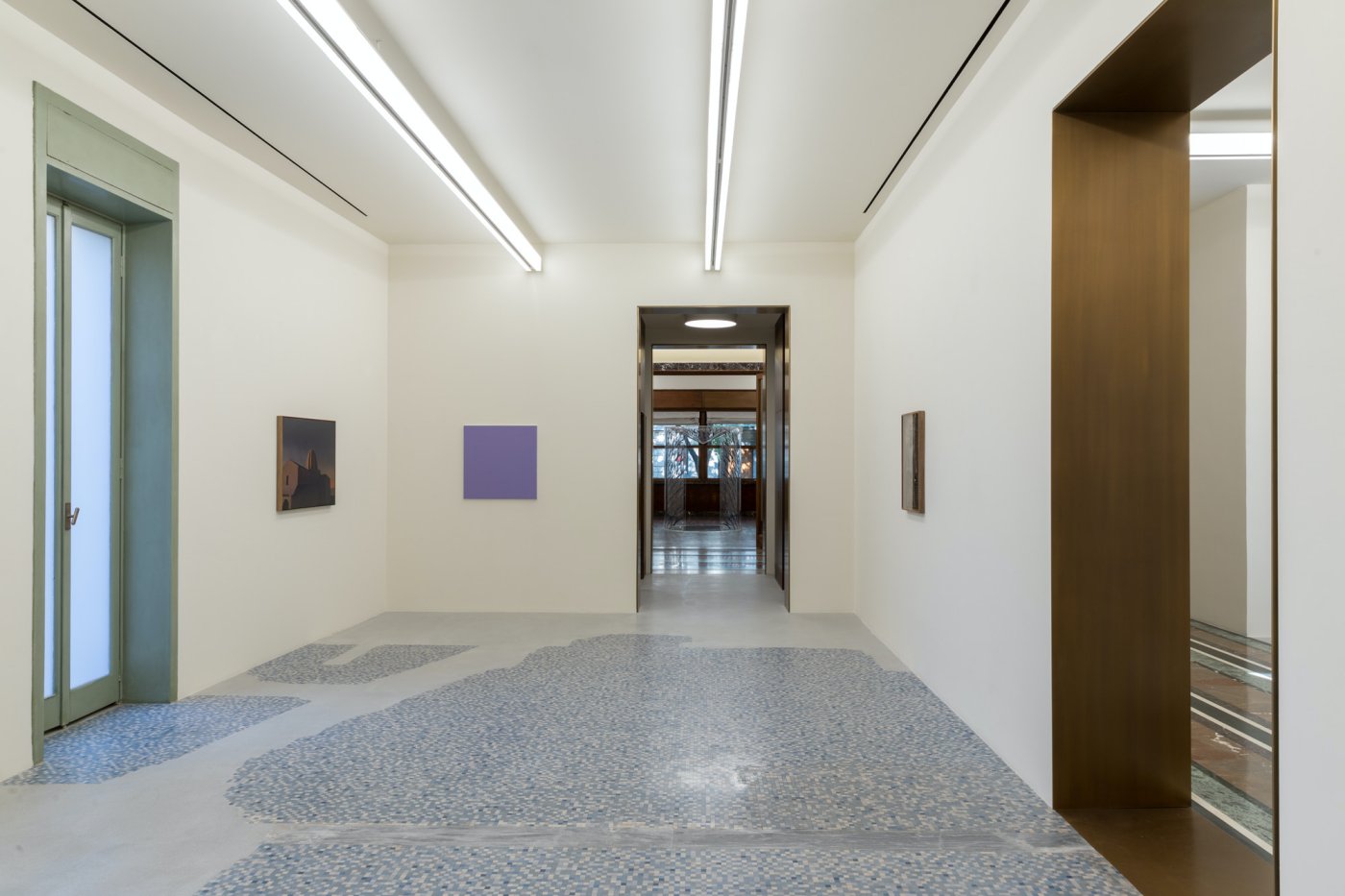 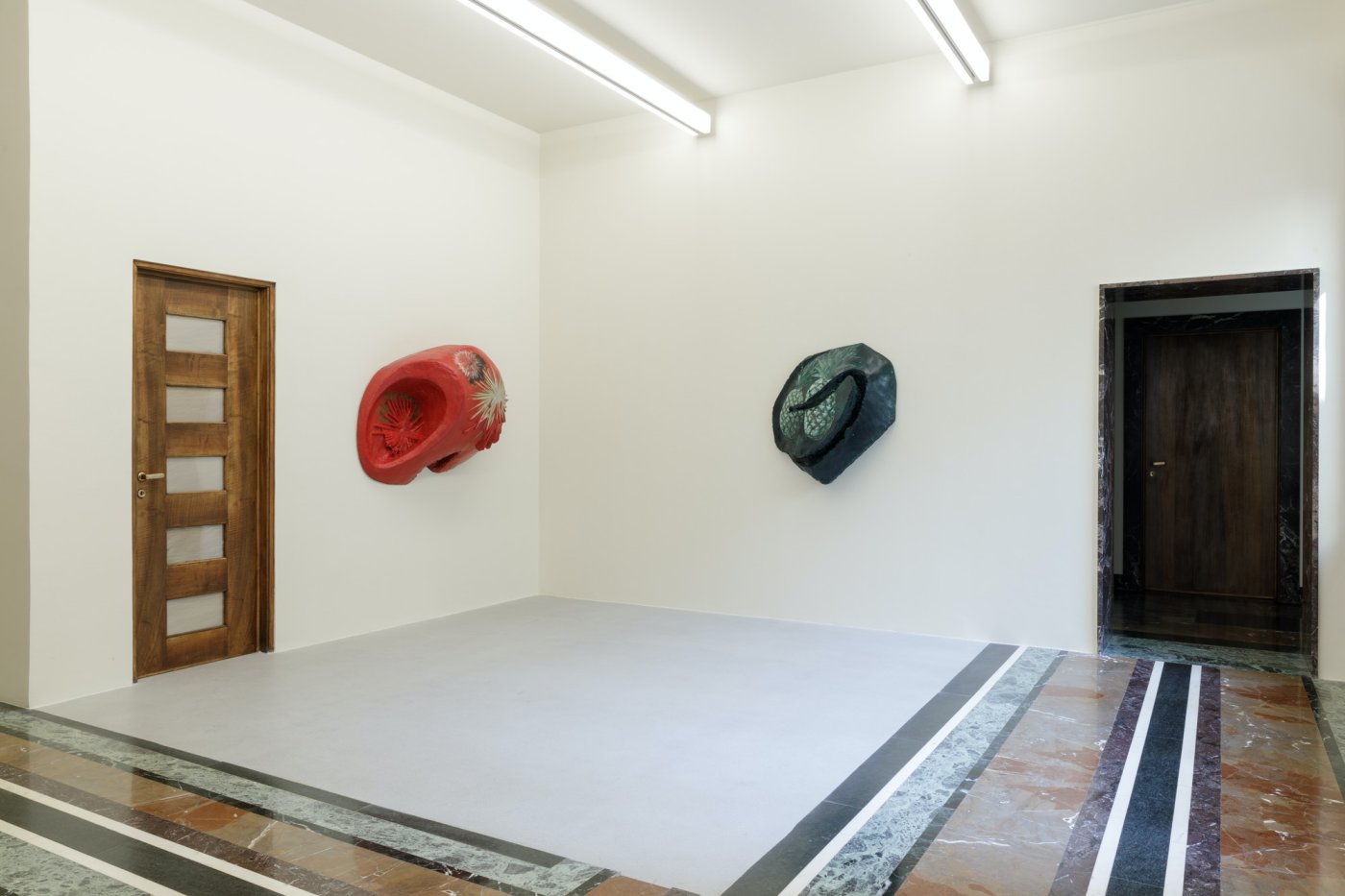 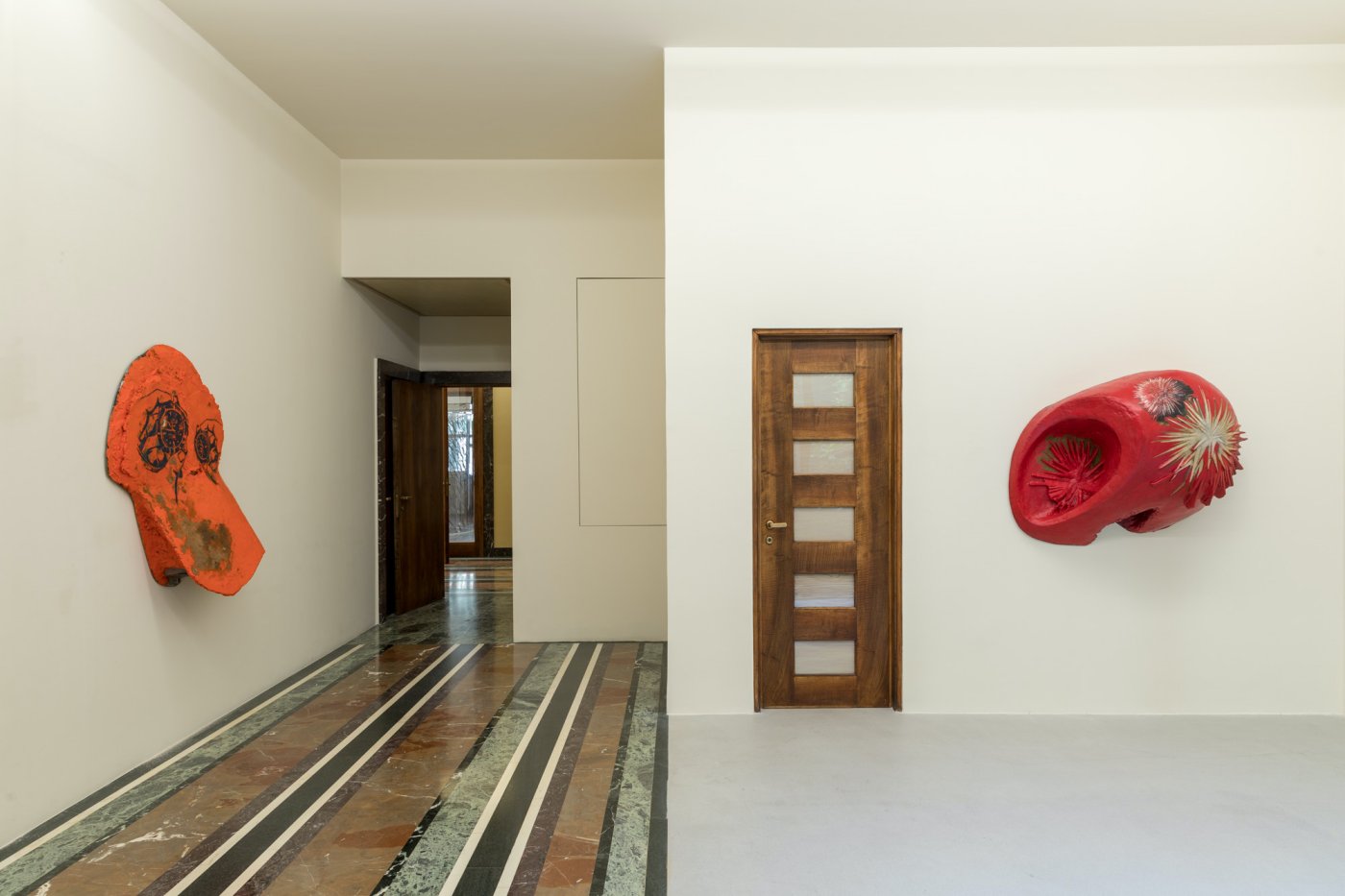 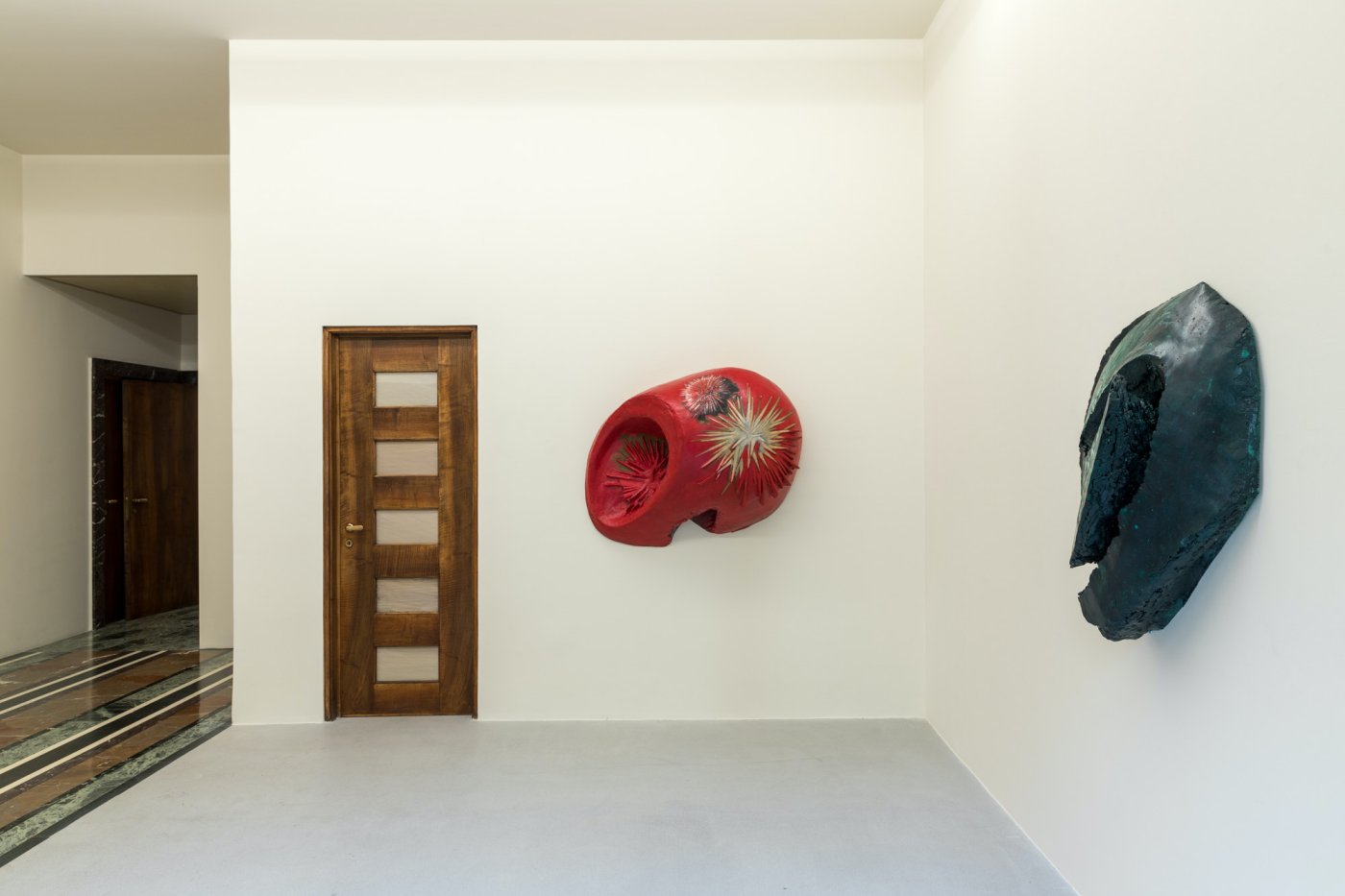 This exhibition brings together eight Italian artists with an intergenerational perspective, featuring works that range from the seventies until the present day. In a time in which a new unprecedented approach to art, the world, space and time is inescapably emerging globally, Come prima, meglio di prima explores the opportunities of a liquid time, in which the present and the past meet and overlap to synthesize a future perspective. The work by the eight artists in the exhibition strongly welcomes this possibility.

The exhibition begins with Massimo Bartolini’s signature marble columns, along with the audio recording of a moving table. The notion of landscape is a recurring theme in the artist’s practice: in On the rock (2019), the landscape comes out of the canvas and challenges its conventional limits. The view of the traditional landscape painting is here supported by a stone – a symbol of a steady and resistant waiting – which was before a natural element and has now become a bronze sculpture.

The viewer is then confronted with works by Carla Accardi and by Paola Pivi. It is not the first time that Massimo De Carlo presents a dialogue between these two artists: on the occasion of the two-person exhibition held in London in 2013, Paola Pivi declared ‘Carla Accardi is my guru’, a statement that reveals how Pivi is attuned to the Sicilian artist. Accardi’s three-dimensional transparent Cilindro-Cono (2013) stands in the centre of the room, blending lightly with the surrounding environment, whilst Paola Pivi’s pearl-cascades sparkle from the walls.

The minimal plaster and steel sculpture contrasts with the rich work on paper by Marisa Merz. The artist was the only female representative of the Arte Povera movement, and beginning in the sixties, she has established herself for her intimate and constantly changing poetics, in which everyday and unusual materials mix to give life to organic and metamorphic forms.

In his practice, Gian Domenico Sozzi utilizes found objects on which he applies layers of thought that transform their identities. The three works on display, from the series called FATIMA (2020), arise from the unexpected appearance of discarded rear-view mirrors, which the artist has collected, repurposed and elevated, revealing the contrasting themes of casualness and determinism that characterize his work.

The exhibition also presents a selection of assemblages by Gianfranco Baruchello. Populated by a multitude of small images, tiny figures and linguistic signs, Baruchello’s works explore the mechanisms of the human mind, its relationships with space and its applications in complex systems such as language, anatomy, nature, society, and politics.

The three canvases by Pietro Roccasalva in Come prima, meglio di prima, reveal the artist’s profound commitment to challenge the power of painting through a vocabulary that mixes different techniques and references, using lexicon from the classical tradition and high cultural references. The artist’s painting ability becomes an extraordinary means of connecting concepts and visions, and remains the key element of a poetic that combines different languages and practices.

The exhibition concludes with a new series of wax and metal works by Diego Perrone, painted bas-reliefs whose shapes are captured from real life, but seen from unusual perspectives, thus making them barely recognizable. On their surfaces appear a number of illustrated subjects that suggest a pictorial synthesis, while they intensify the wax translucent effect.

The exhibition Come prima, meglio di prima is also enriched with original content specifically created by the artists for our Instagram page @massimodecarlogallery.