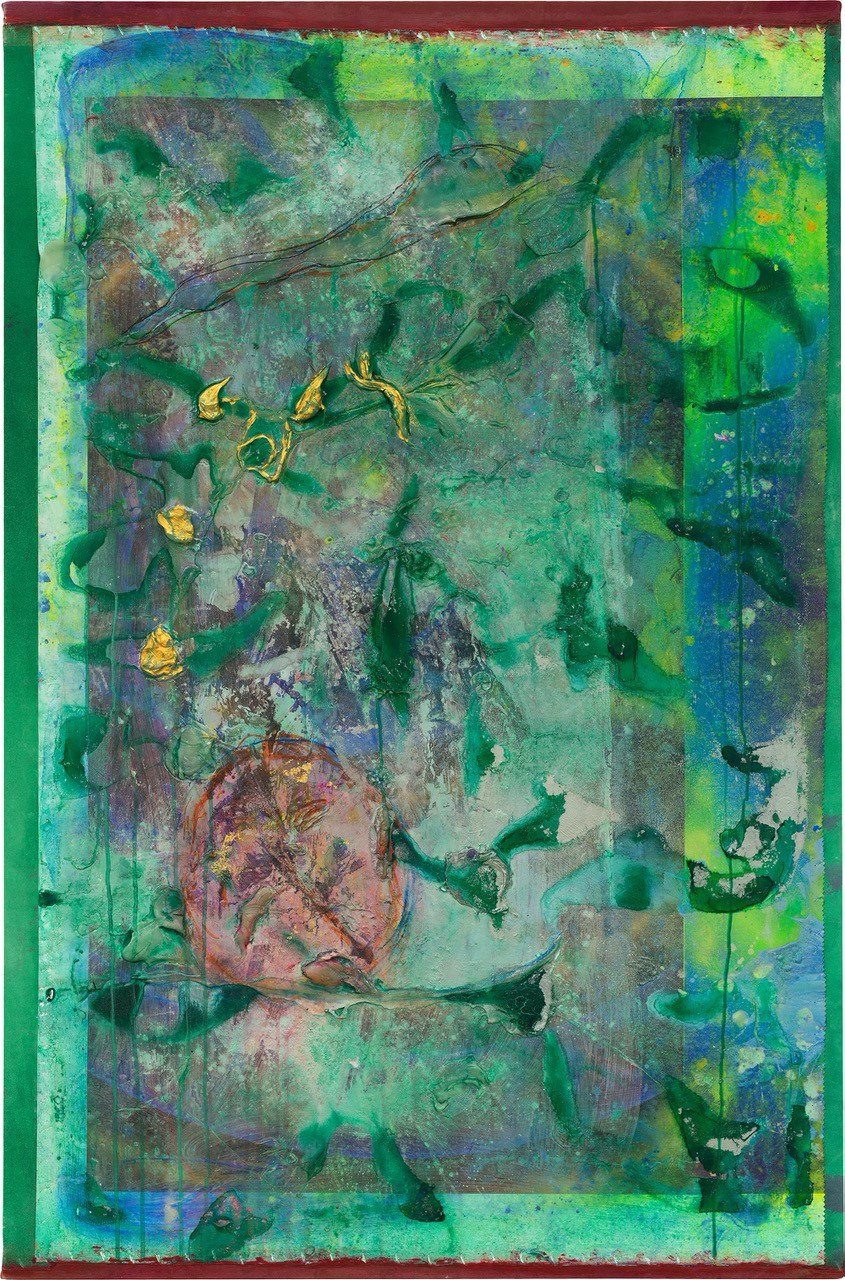 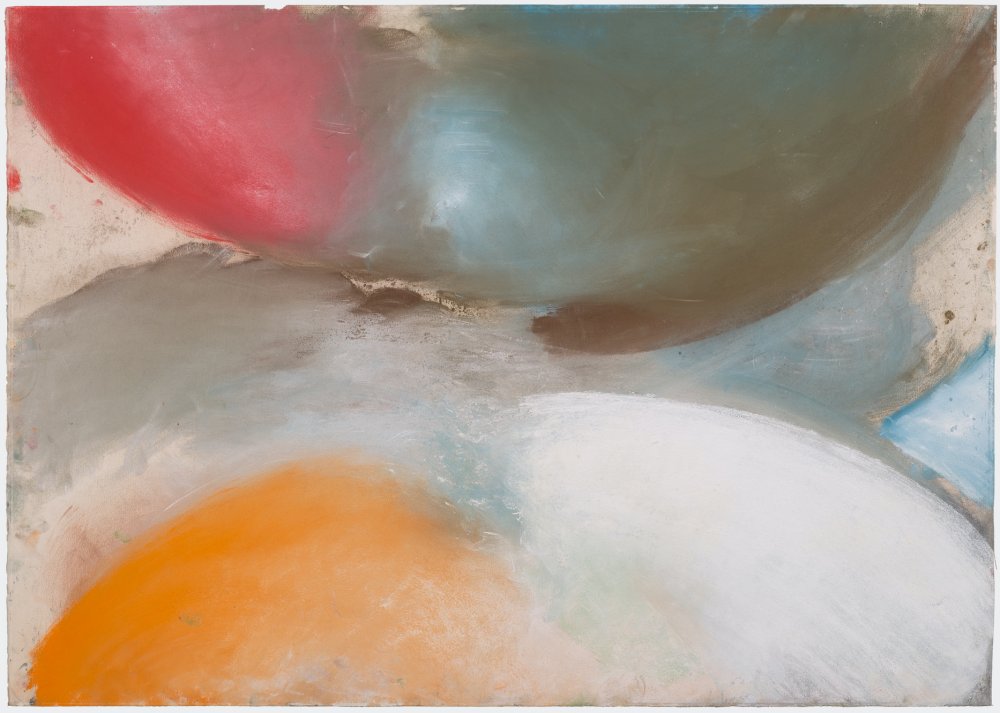 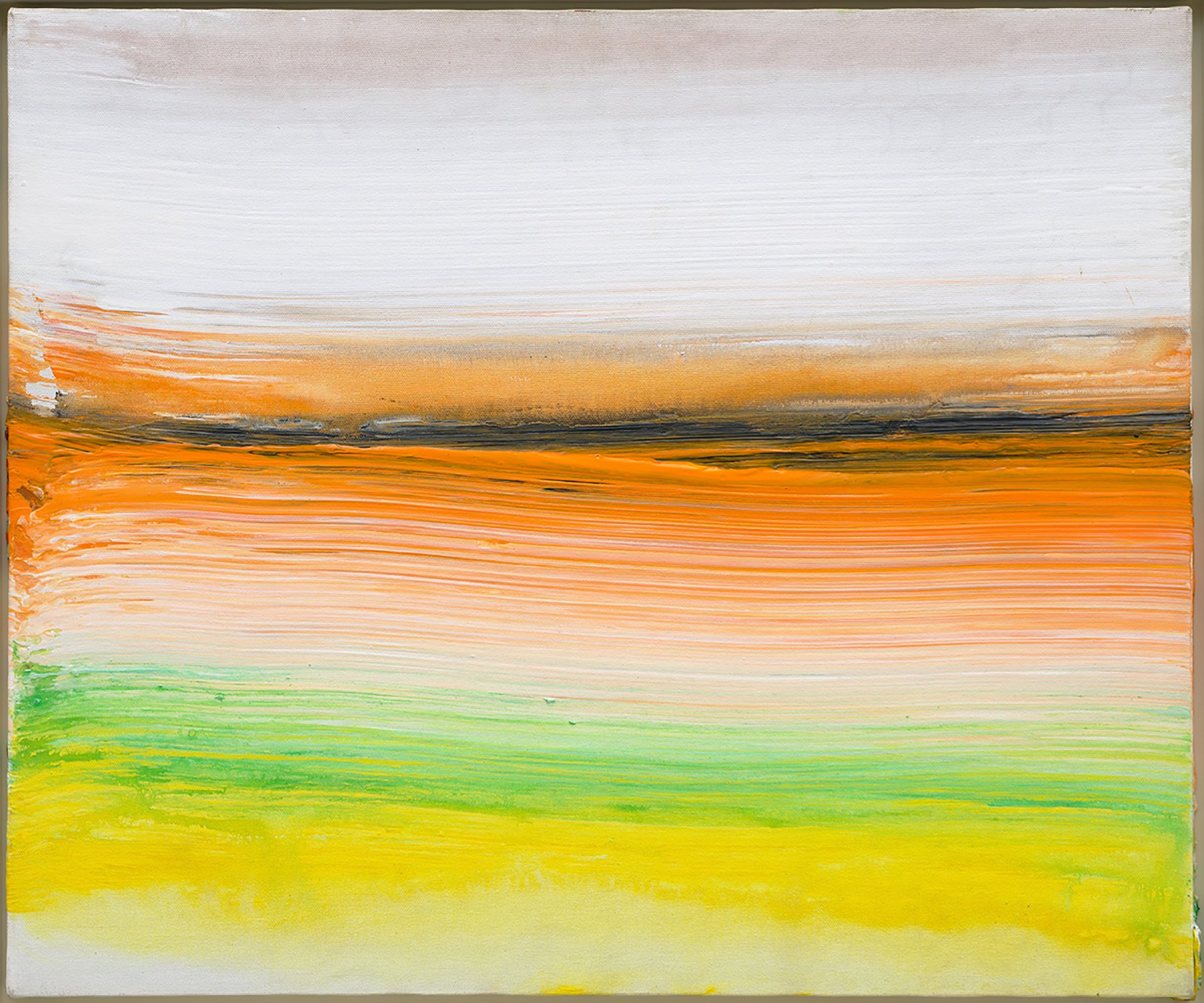 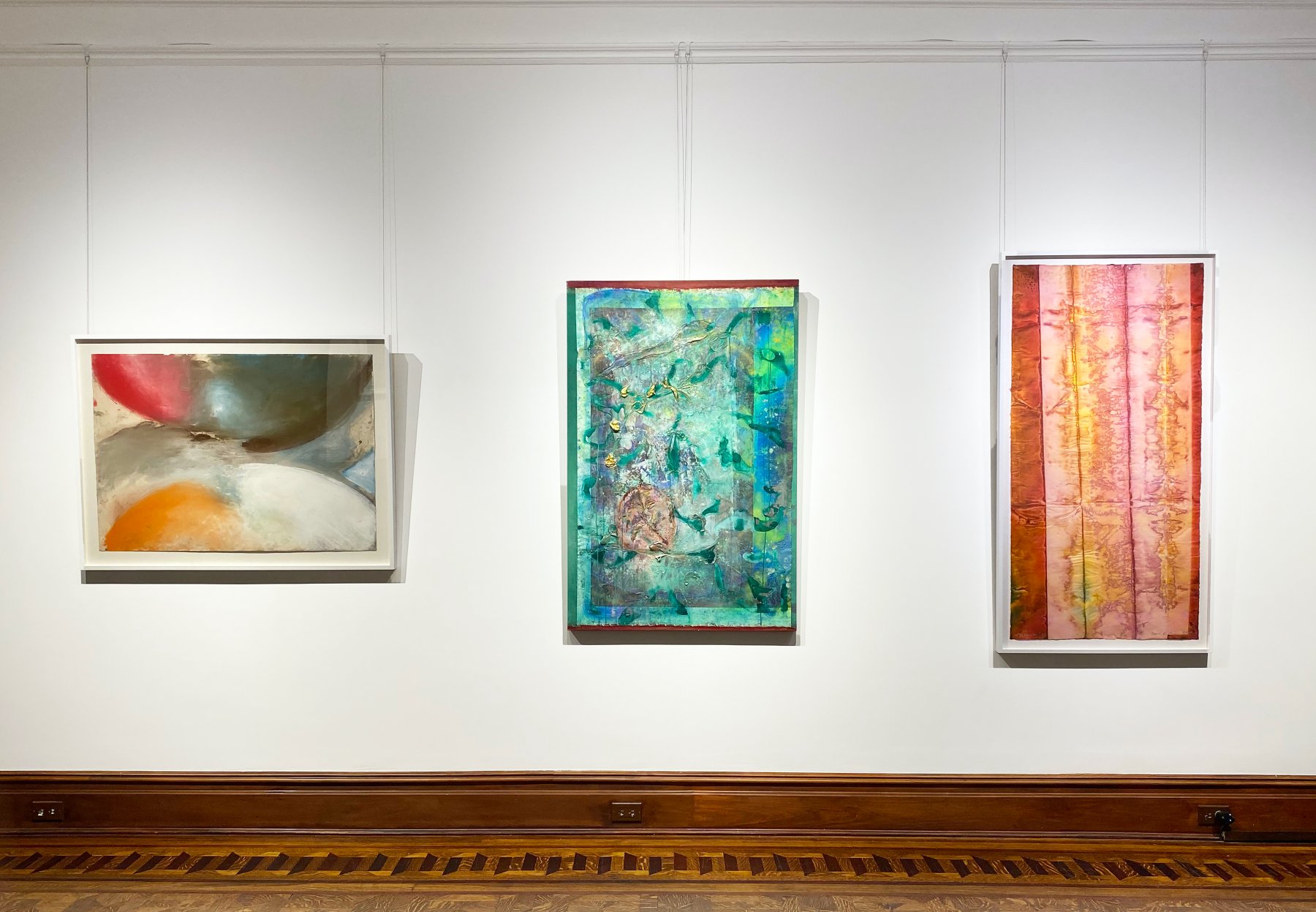 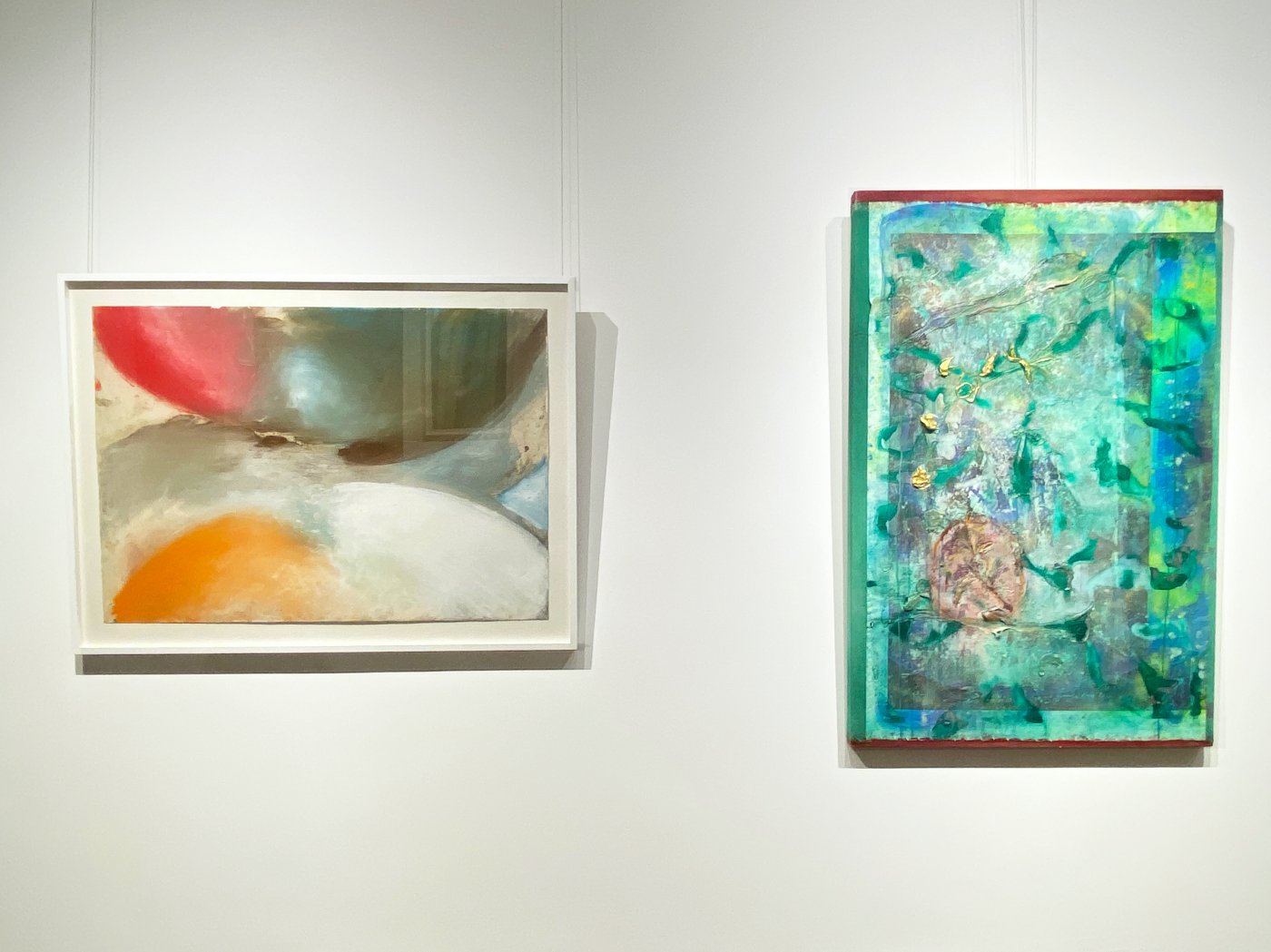 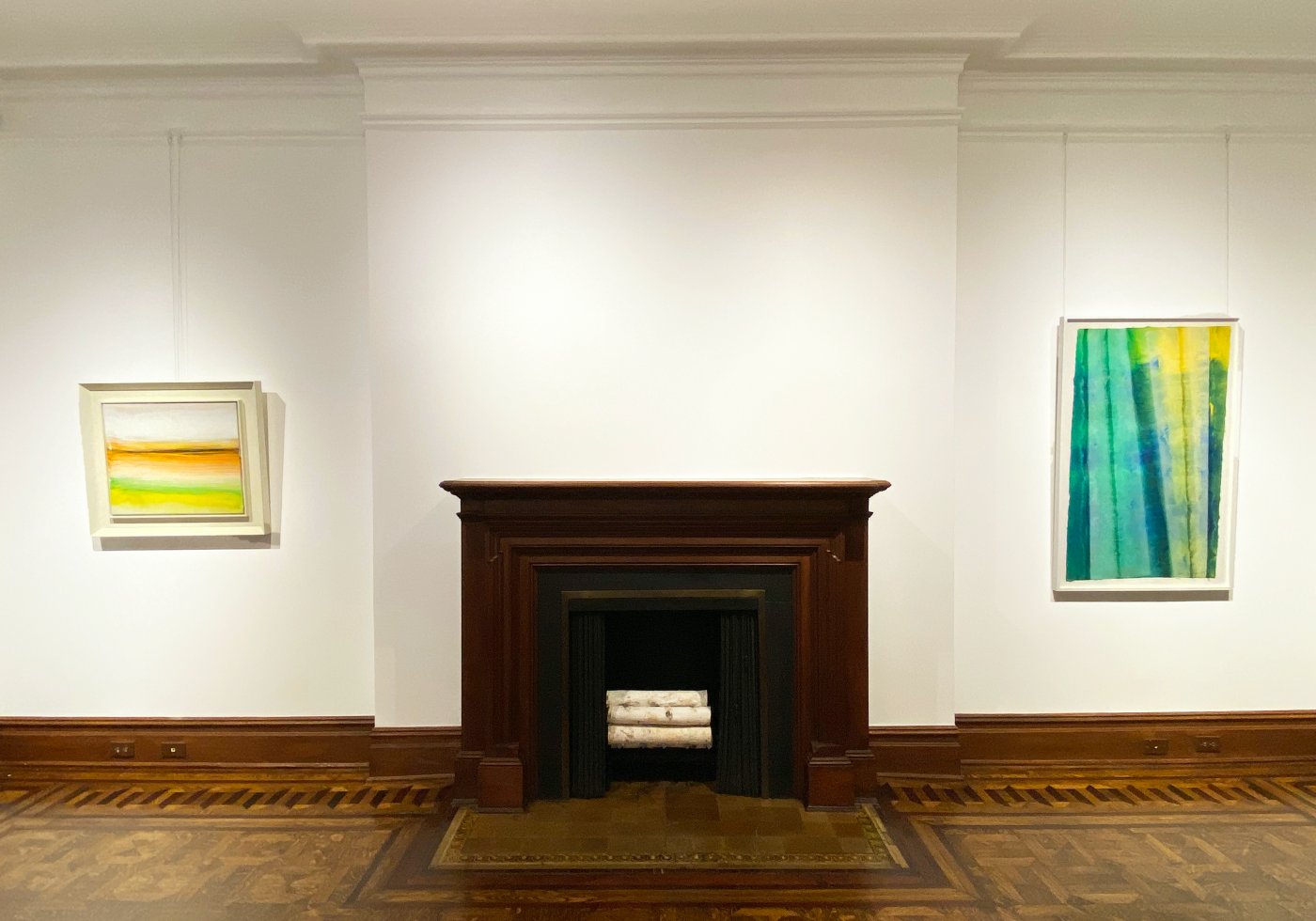 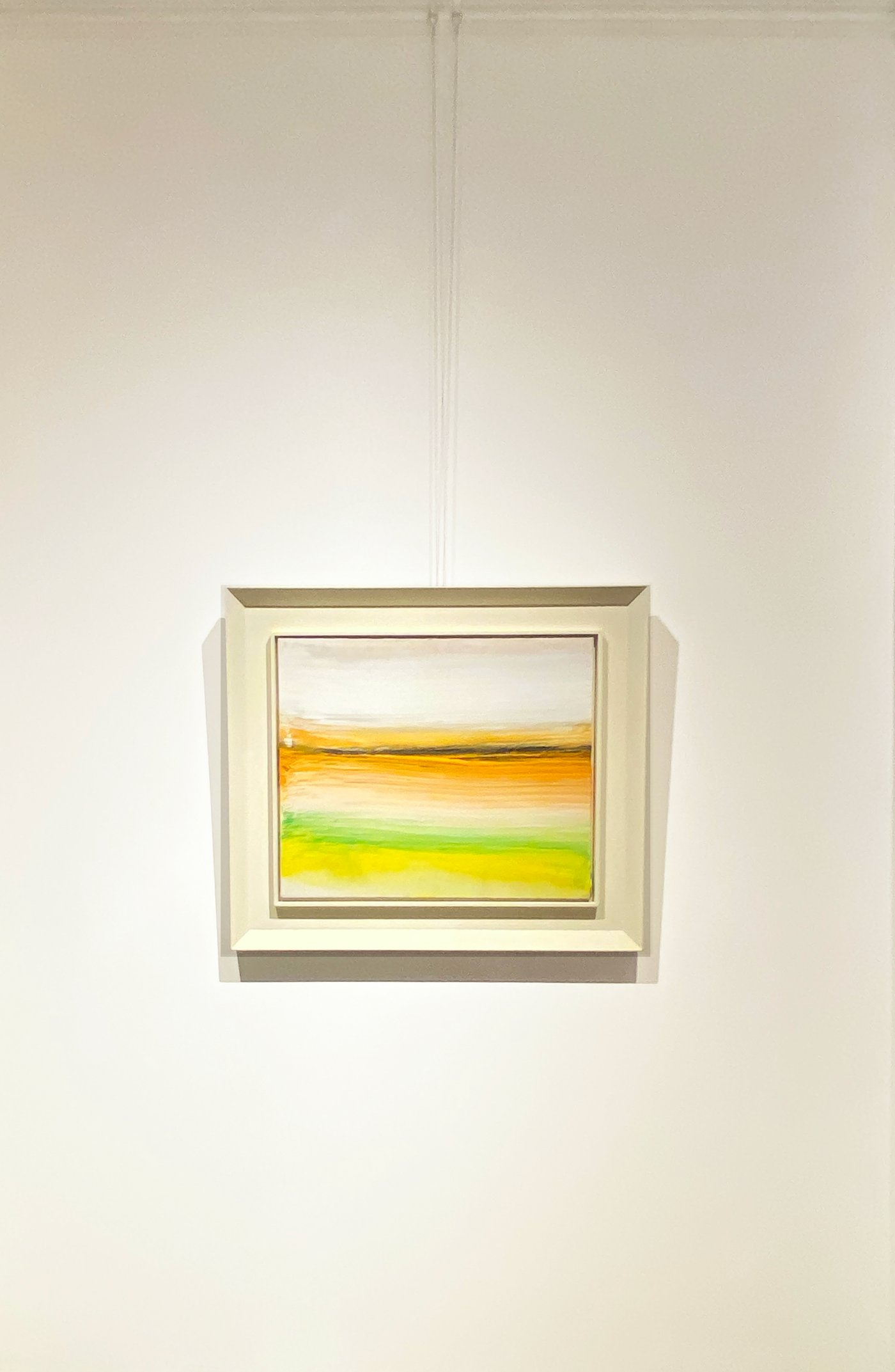 Whether applying color with their hands, soaking pigment into their canvases, sweeping paint on with brooms, or draping their canvases from the walls and ceilings, these three artists dramatically transform their medium. Within their work Bowling, Clark and Gilliam do not shy away from politics—as Gilliam has argued, “the expressive act of making a mark and hanging it in space is always political”— while equally devoting their practice to radically rethinking the act of painting itself.

Throughout his sixty-year career Frank Bowling has been a central inheritor and re-interpreter of color field painting’s legacy. In works such as Flying Footy (2018), the viewer can clearly see Bowling’s exploration of painting’s materials. Fluid leaflike green shapes are overlaid with silver, pink and a striking passage of raised gold. Here Bowling begins by applying a thin stain or wash of paint to an unprimed cotton canvas onto which he pours, drips, and brushes paint. Underneath this gestural surface, however, are crisp lines and painted frames: the base canvas is largely covered by another fabric whose right edge is cut with pinking shears. The pinked edge recurs in Bowling’s work, often when he has included collaged elements. However—as his mother was a dressmaker and milliner—it is among the autobiographic details that Bowling frequently includes in his work. In its complex layers and experimentation with materials, Flying Footy is a remarkable synthesis of Bowling’s artistic concerns.

In the 1950s Ed Clark began using a push broom to apply paint to canvases that he laid on the floor, a technique he termed “the big sweep.” The resulting physicality and movement became a hallmark of Clark’s later paintings such as Untitled (2002) in which thick horizontal strokes of yellow, green, white, orange and black streak across the canvas. Smaller in scale, Untitled nonetheless exhibits Clark’s signature broad gestures and luminous color. Clark’s experimentation was not confined to his works on canvas: Untitled (1996) is an example of his works on paper using dry pigment, a technique inspired by Pueblo sand paintings of the American Southwest. Here he reinterprets the oval forms that had preoccupied him in the 1960s—both as composition and in his pioneering series of shaped canvases—presenting curved shapes as glowing clouds of atmospheric color.

Sam Gilliam is best known for his revolutionary approach to both the canvas support and paint application. In his canonical ‘Drape’ series, begun in 1968, he suspended unstretched canvases from the walls and ceiling. Rich with diaphanous, sometimes near-fluorescent color, these works broke the boundaries between the space of the painting and the real space of the viewer. Never hung the same way twice, the Drape paintings become both improvisational – Gilliam cites Jazz as an influence – and performative. In B Series II (2015) and Construct (2018) Gilliam continues his experiments with technique and color. Gilliam uses pigment-based ink or acrylic on handmade paper, manipulating the paper to create sharp vertical folds and pools of paint. The tension between improvisation and structure –between the ink’s liquidity and the linear structure of the paper’s folds—is characteristic of Gilliam’s experiments with media. While the vertical folds give the impression of depth and a linear structure, the pigment soaks the paper in loose and brilliant blurs and pools. B Series II and Construct exemplify Gilliam’s ceaselessly innovative approach to materials.