Clive Hodgson: The Thing About A Name Is That It Doesn’t Refer To An Object

Clive Hodgson: The Thing About A Name Is That It Doesn’t Refer To An Object

Clive Hodgson: The Thing About A Name Is That It Doesn’t Refer To An Object
Mon 8 Mar 2021 to Sat 5 Jun 2021
Wed-Fri noon-5pm, Sat 1pm-6pm by appointment
Artist: Clive Hodgson 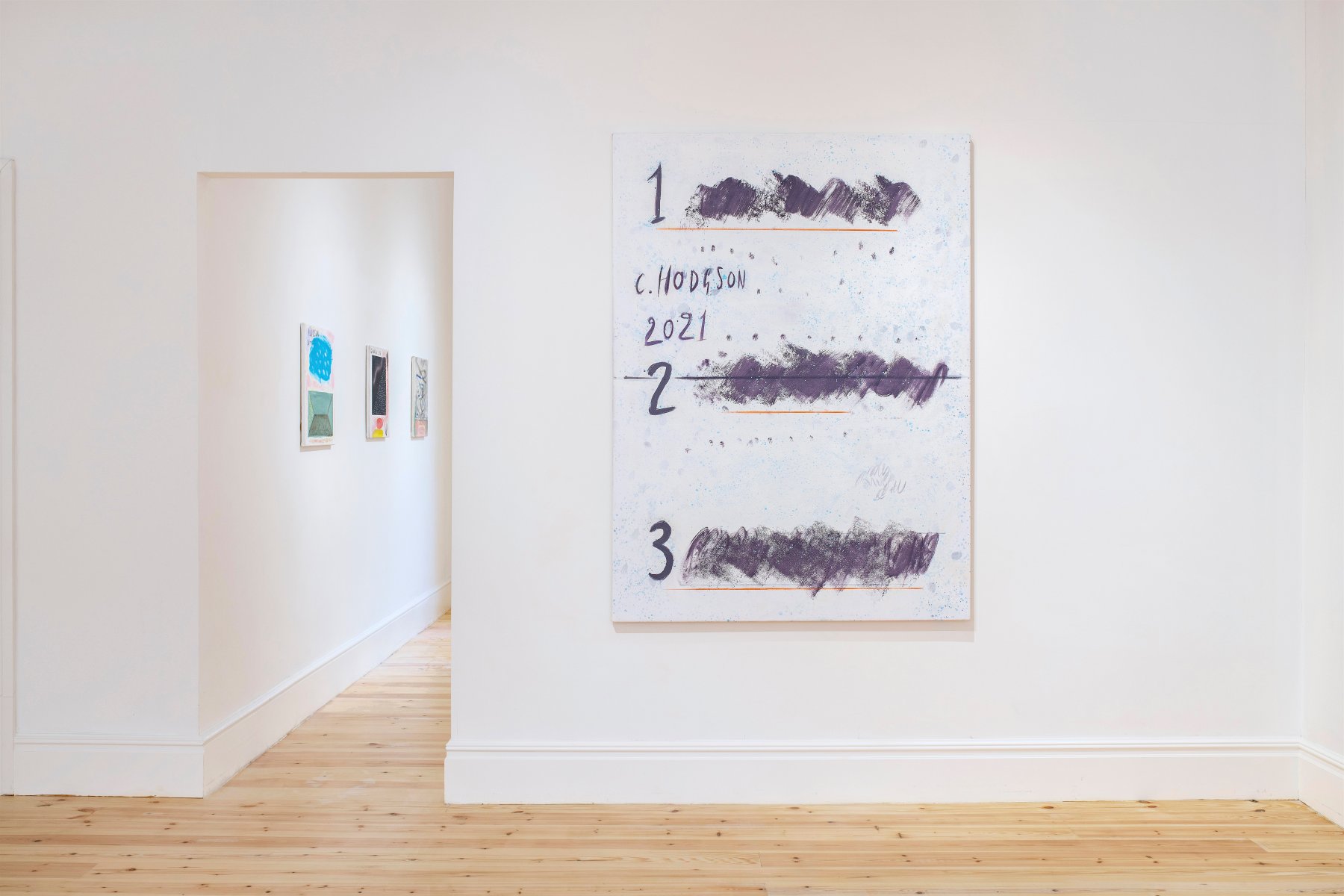 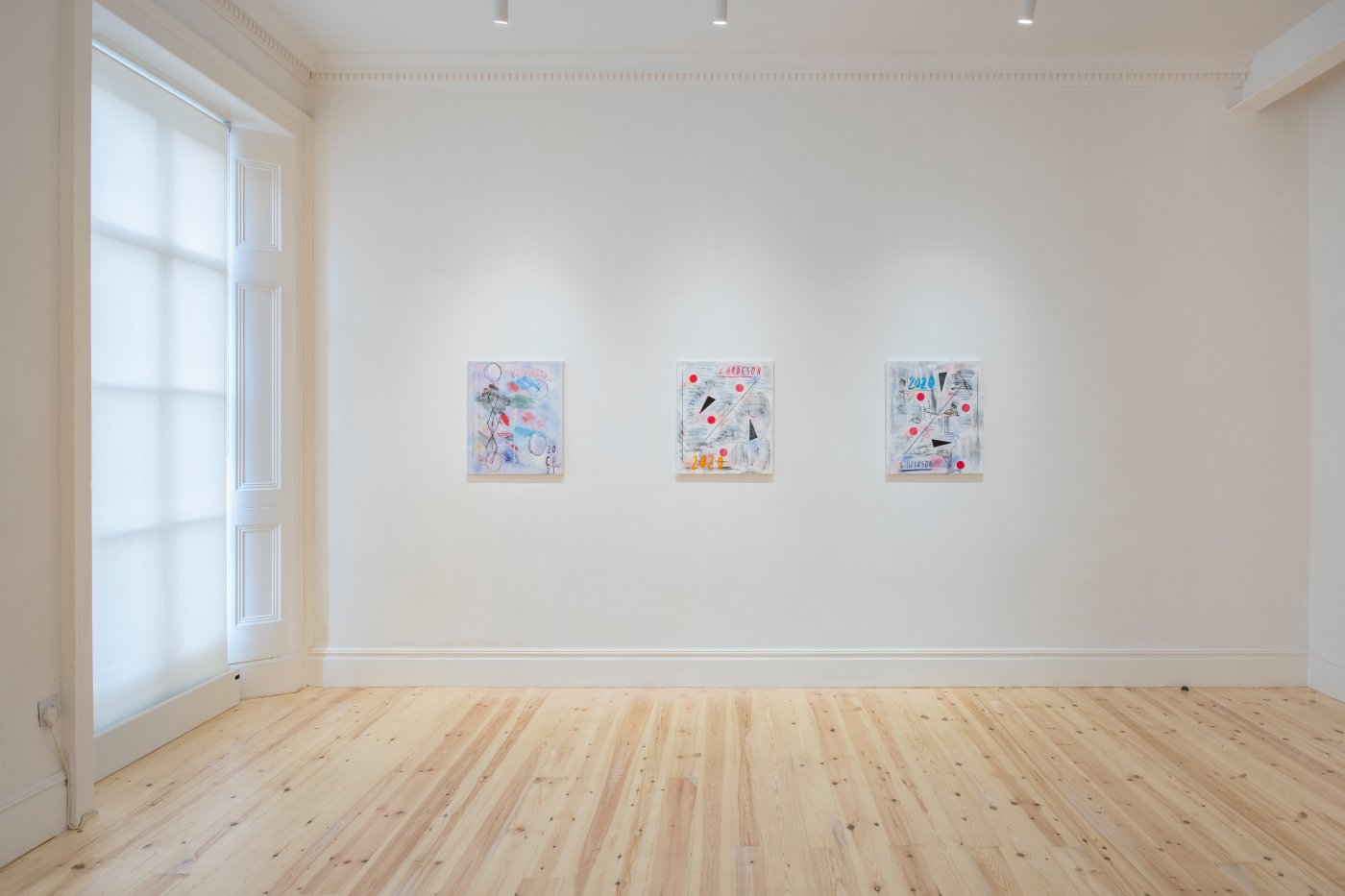 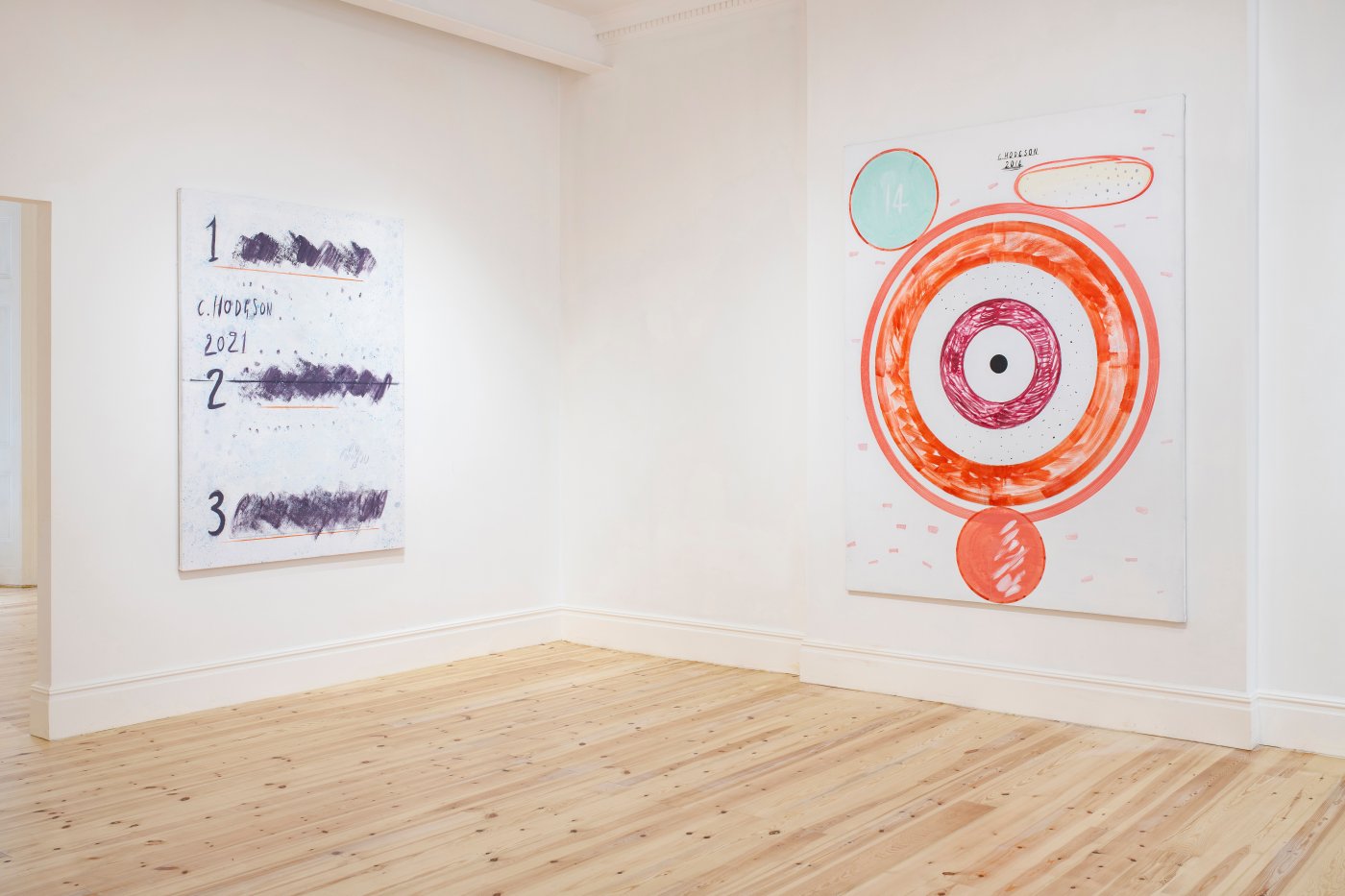 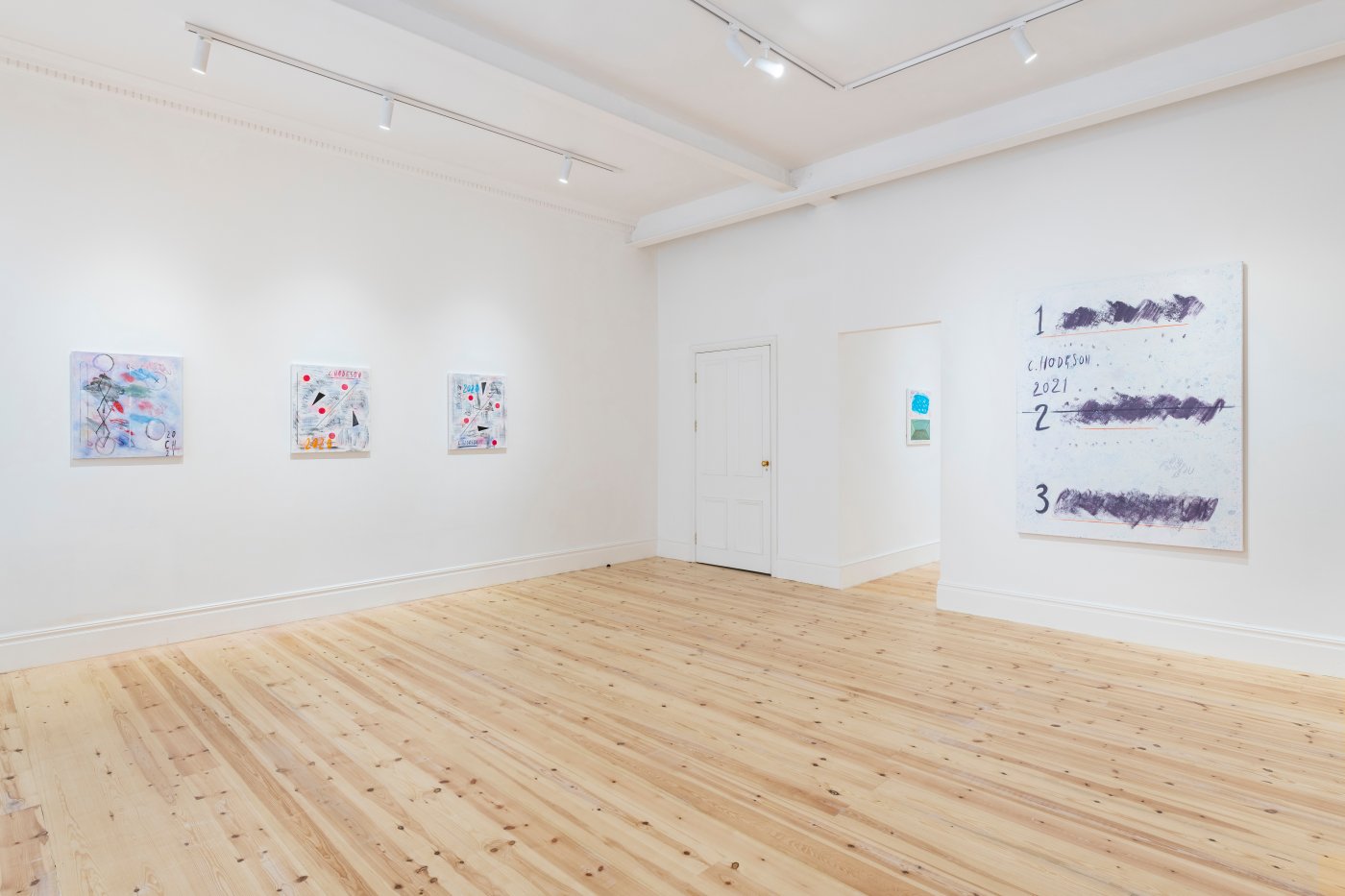 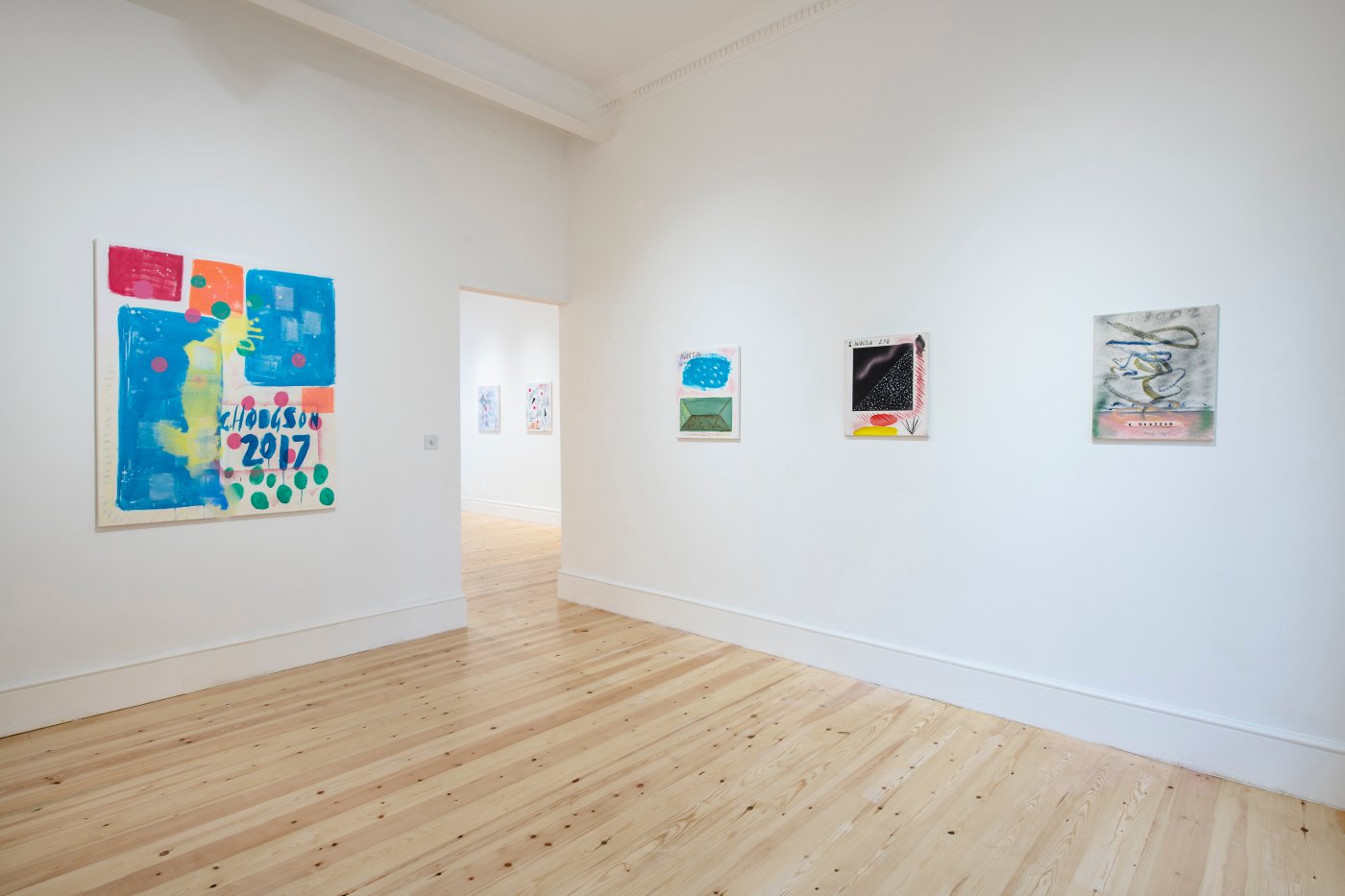 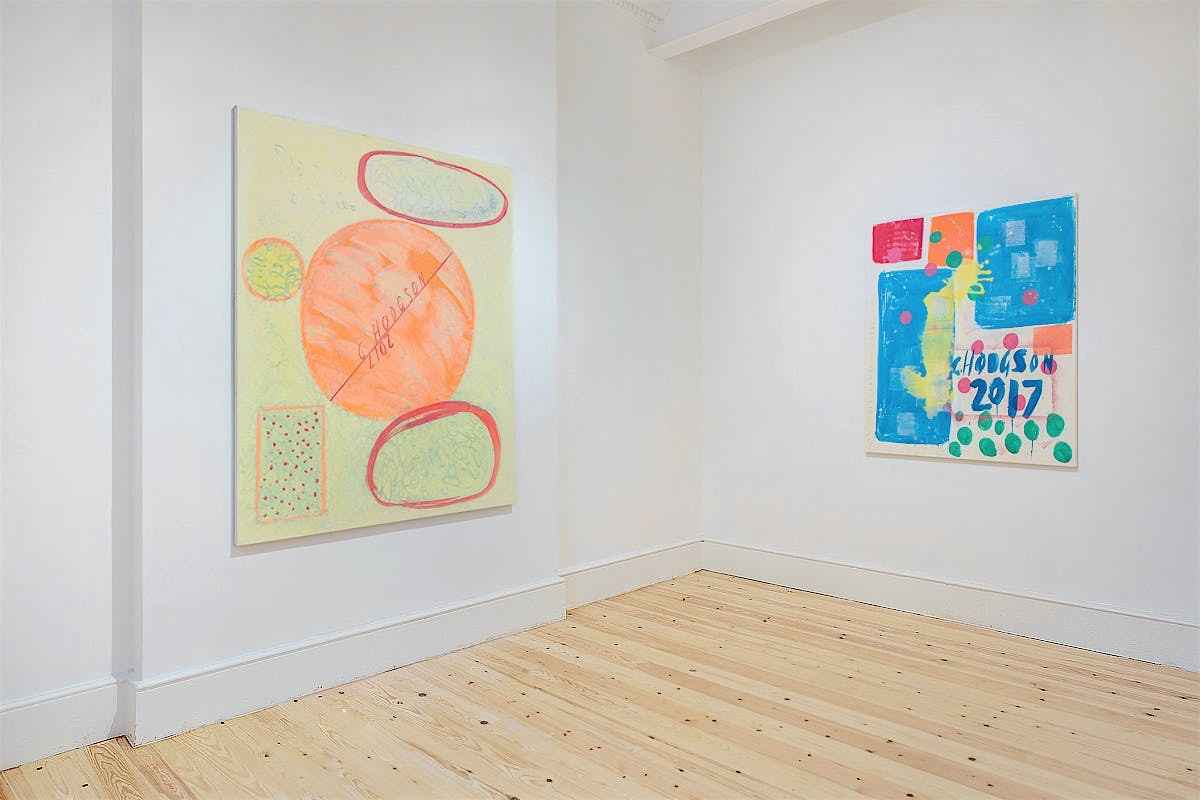 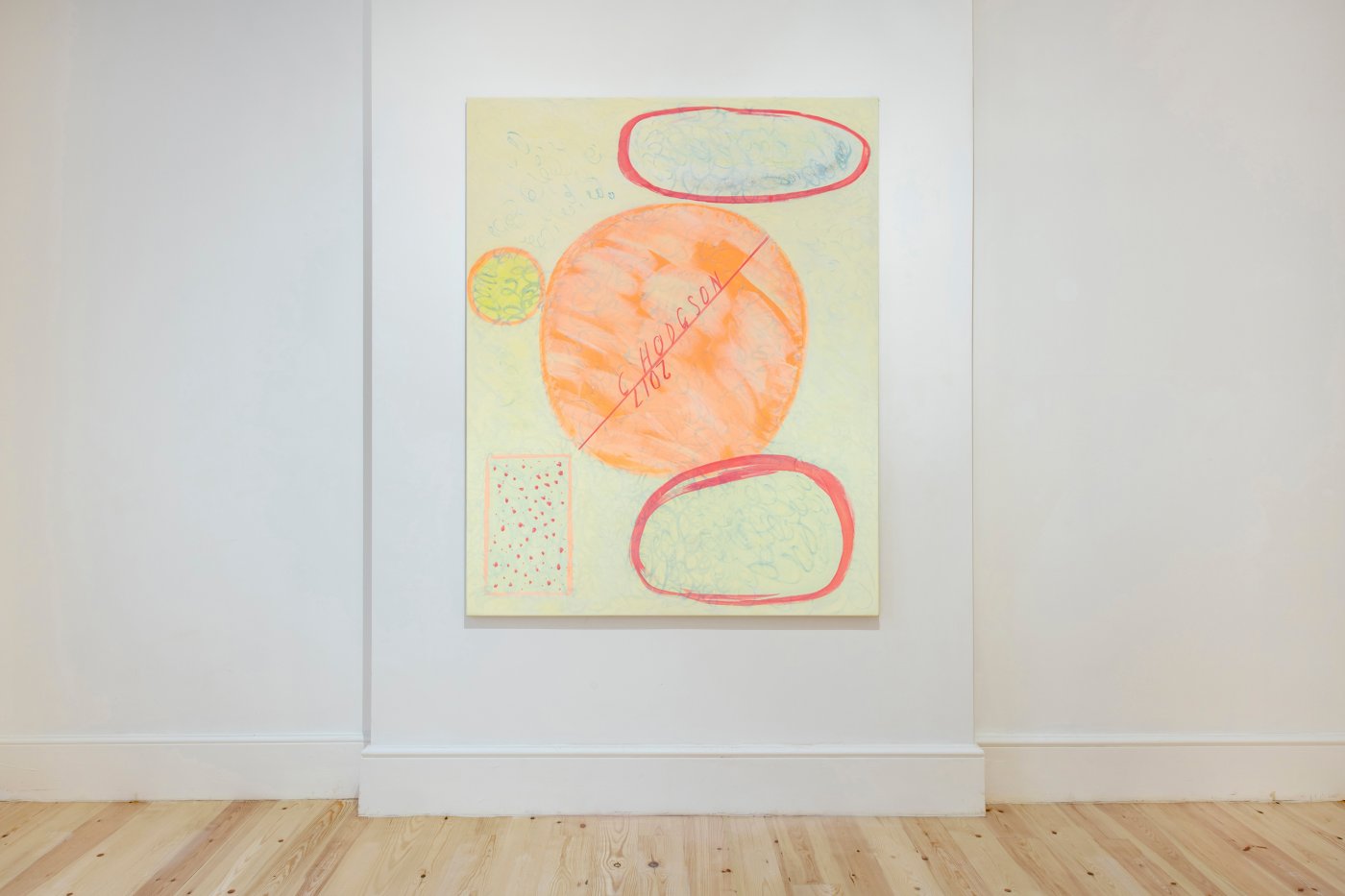 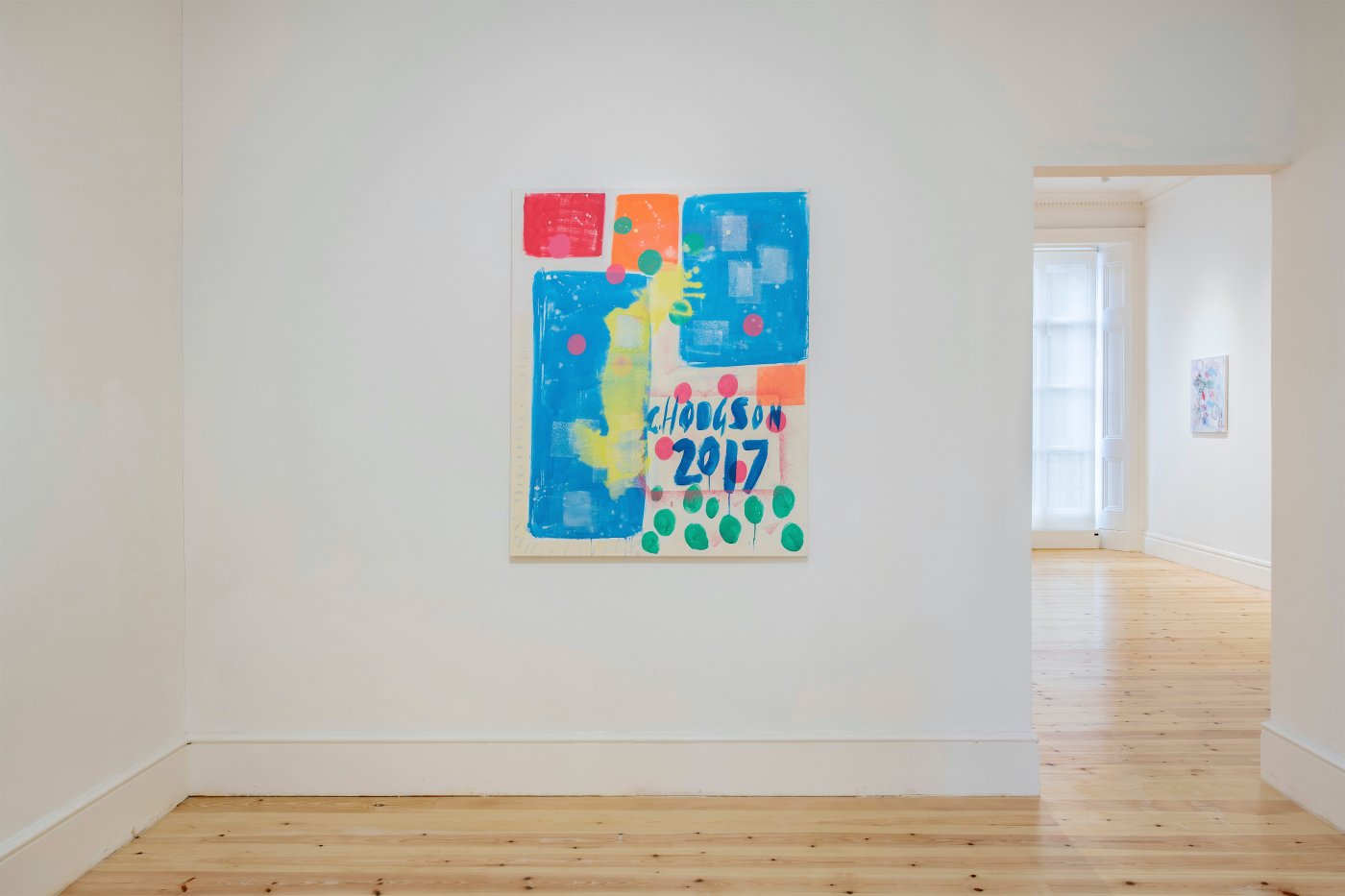 Just what is that makes a Clive Hodgson worth a second look? The reason is that it is intelligent painting, but at first glance one’s gaze tends to slip off the surface. In general the parameters of his work appear simple: marks, gestures, blotches, spatters, but also elements drawn from representational painting, like cross-hatching, outlines, as well as graphic elements like crosses, circles. In the past some of his paintings have used decorator’s effects, like ragging, sponging and sprays. More recently, numbers, suggesting a countdown or resembling a list on a page, have also been deployed. In a large 2017 work, Untitled (CH3092), faint circular marks take up most of its background. It’s like a bored kid doodling. Who does that?? And yes, that’s what makes his paintings joyful. The marks ideate the language of representational painting, but what is representational mark-making without representation? This question leads to the idea of painting itself. What makes a painting? In a physical sense, canvas, pigment stuck on surface, maybe even the support. However, the things that are painted or the way they are painted can also be put to question, more precisely to use Derrida’s phrase, put “under erasure”, or in demonstration, “u̶n̶d̶e̶r̶ ̶e̶r̶a̶s̶u̶r̶e̶”. Dates and his signature make up the final, and most notable, a hallmark of his mature work. Although these two markers are often marginal (as in they do not take up much of the canvas), they are constants in his painting.

This exhibition comprises a selection of his larger canvases (ranging from 2014 to the present) as well as several recent pieces. Hodgson often paints in groups that might be linked by palette and related visual elements or effects. For instance, in 2020, black triangles and red circles, scumbles, sprays and blemishes constitute a line of exploration (CH3370,3371). While several in 2017 (CH3094), which I jokingly refer to as “Vache”, in reference to Magritte’s antagonistic group of figurative paintings, possess bright fairground-like colours as well as painterly circles and round-cornered squares and rectangles. There is an effervescent joy akin to the charged play of Magritte’s provocation. Both bring about a grin of amusement. And, of course, name and date are ever-present.

They can evoke a sense of fluidity, restlessness, or even anxiety; wander around a Hodgson show and you might quickly come to the view that there is no fixed position, ideology, or project. The point is that a Hodgson walks a tightrope between content and no subject matter. Thus, many latch onto his name and date as anchors to the convention of painting. In fact in this context, they become signs for painting itself. Yet this is not a conceptual parameter per se. A Hodgson painting does not work merely as an idea, and neither is it a negation of painting (which is also an idea); rather, his is a tightrope walk around the possibilities of painting. What do I mean by this? In her introduction to Derrida’s Of Grammatology, Gayatri Chakravorty Spivak explains that “[s]ince the word is inaccurate, it is crossed out. Since it is necessary, it remains legible.” (p.xiv) There is a sense of that with a Hodgson. A small 2017 work, Untitled, (CH3369) has two elements, a rectangle with lines that suggest a perspectival field or a brick-like form (urban) in earthy green, and, above, a swatch of blue with white blemishes could be sky and cloud (nature). Around these two elements are scumbles of different hues filling in the white surround. Are they ciphers for landscape painting? Is he questioning landscape? Is it a joke? A brick in our face? Is landscape under erasure? There are no answers, really just questions. And that is the tightrope walk. What is this? Do I even like this? I need a second glance… Then we are hooked.

Clive Hodgson (b.1953 Nottingham, UK) lives and works in London. He studied at St. Martin’s School of Art 1971-72 and the Slade School of Art 1972-77. He has exhibited internationally and shown most recently at: Arcade (London), Tatiana Pieters (Gent), White Columns (New York) and Bruce Haines Mayfair (London). His work has been included in group exhibitions that include: “In this soup we swim” , Kingsgate Workshop, London; “What’s the meaning of a goldfish”, Tatjana Pieters Galley, Gent; “With Matthew Higgs” , Wilkinson Gallery, London; “Slow Learner”, Timothy Taylor Gallery, London; “July”, The Approach Gallery, London; “A poem for Raoul and Agnes”, Ancient and Modern, London; “Incorrigible, Sentimental”, Filles du Calvaire, Brussels; “False Friends”, Five Years, London; “Ever Since I Put Your Picture in a Frame”, 42 Carlton Place, Glasgow. His work is represented in the collections of the Arts Council, University College London and The Royal London Hospital, as well as private collections internationally.

Installation view of Clive Hodgson: The Thing About A Name Is That It Doesn’t Refer To An Object at MAMOTH, 2021. All images courtesy of the artist and MAMOTH