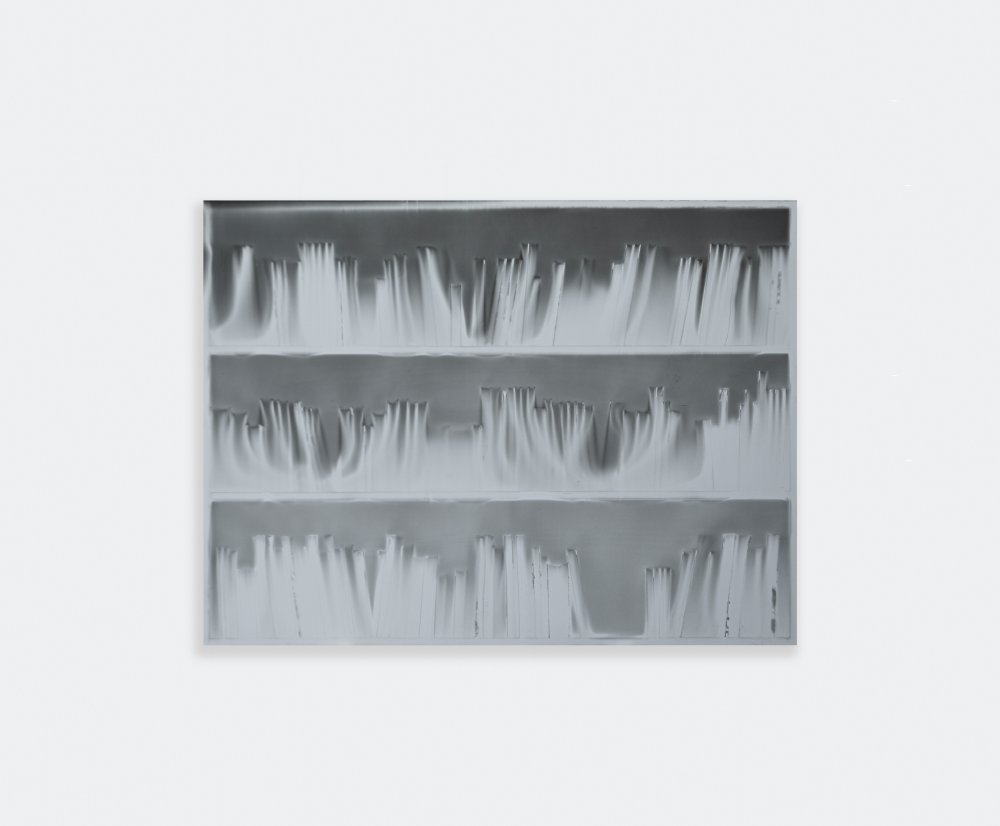 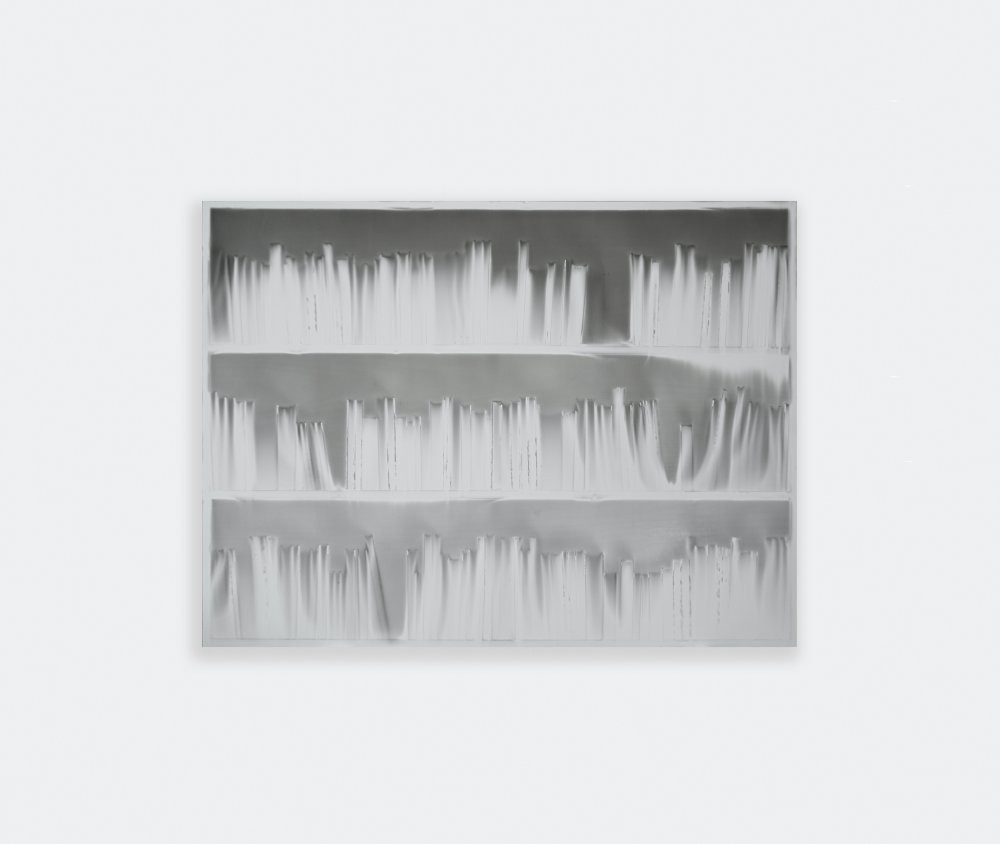 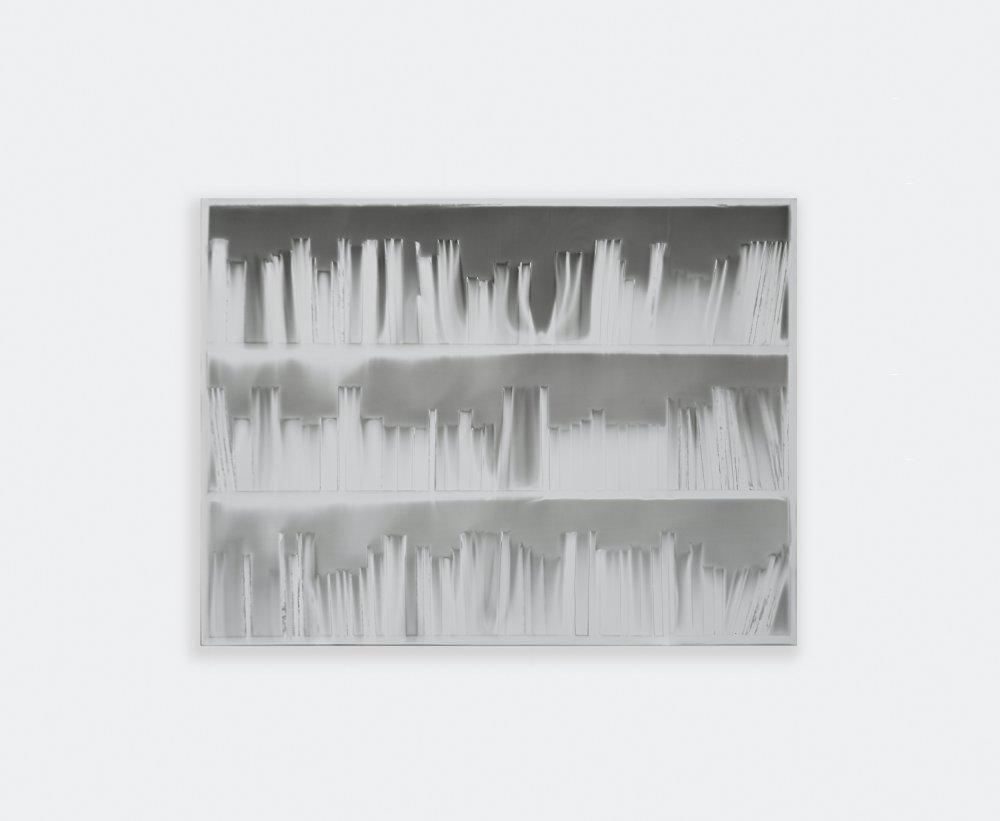 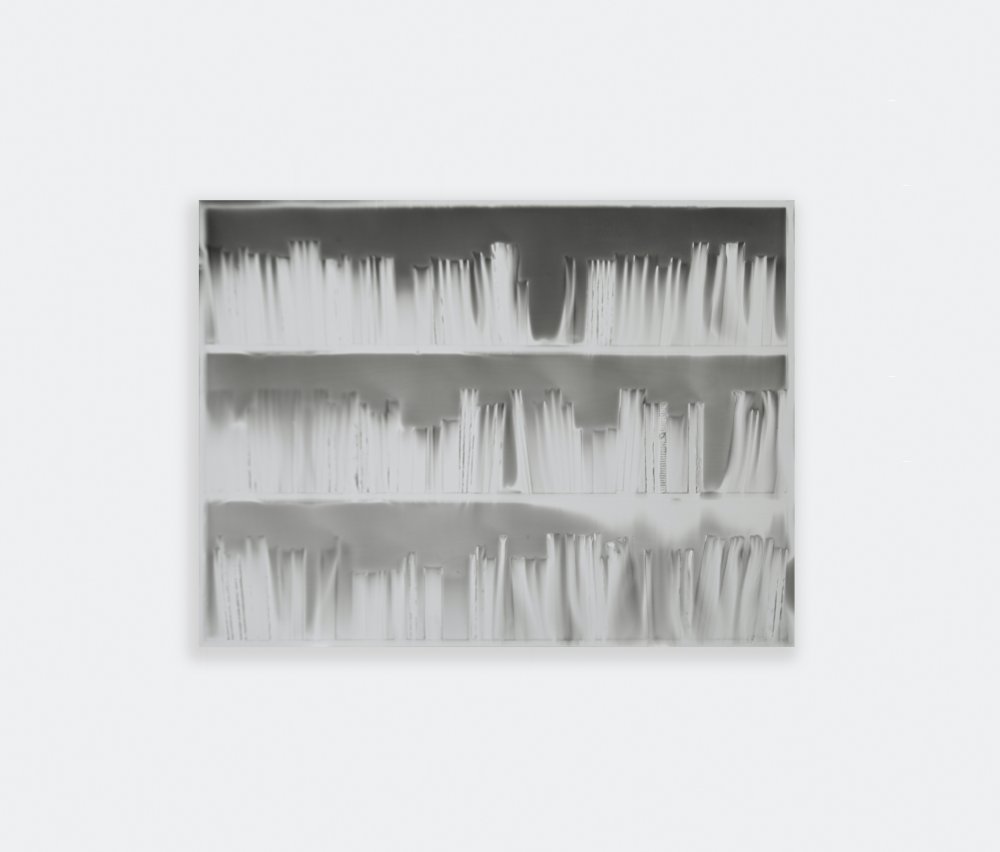 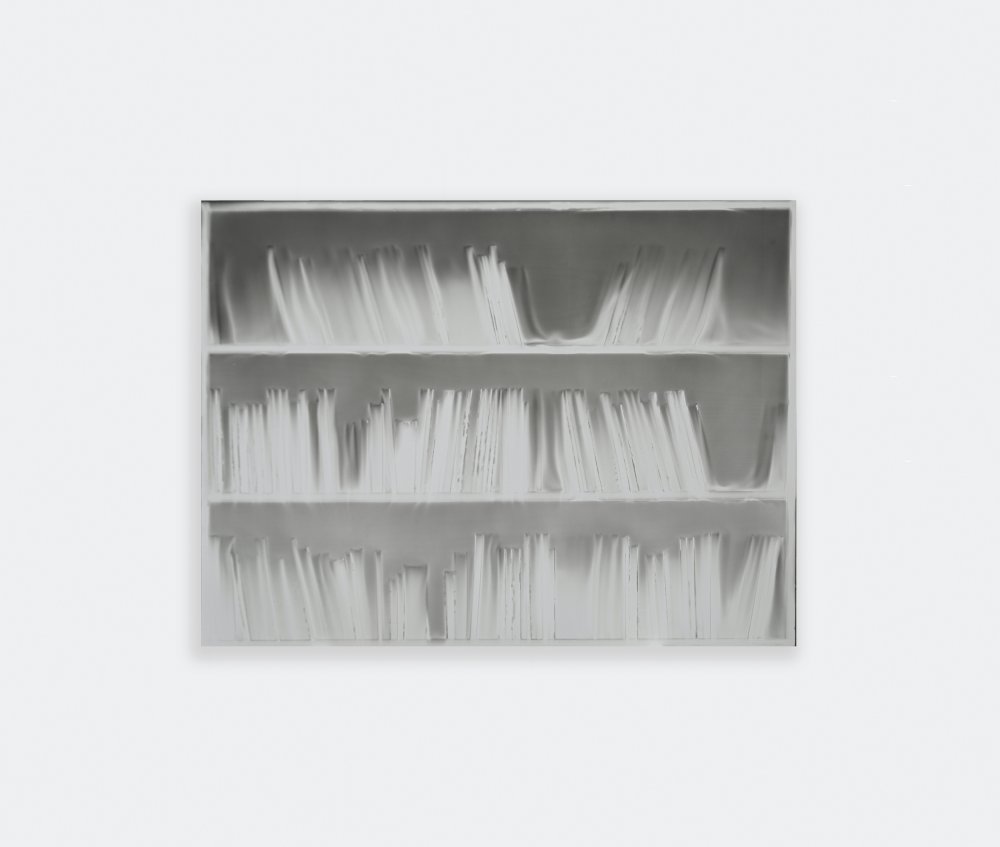 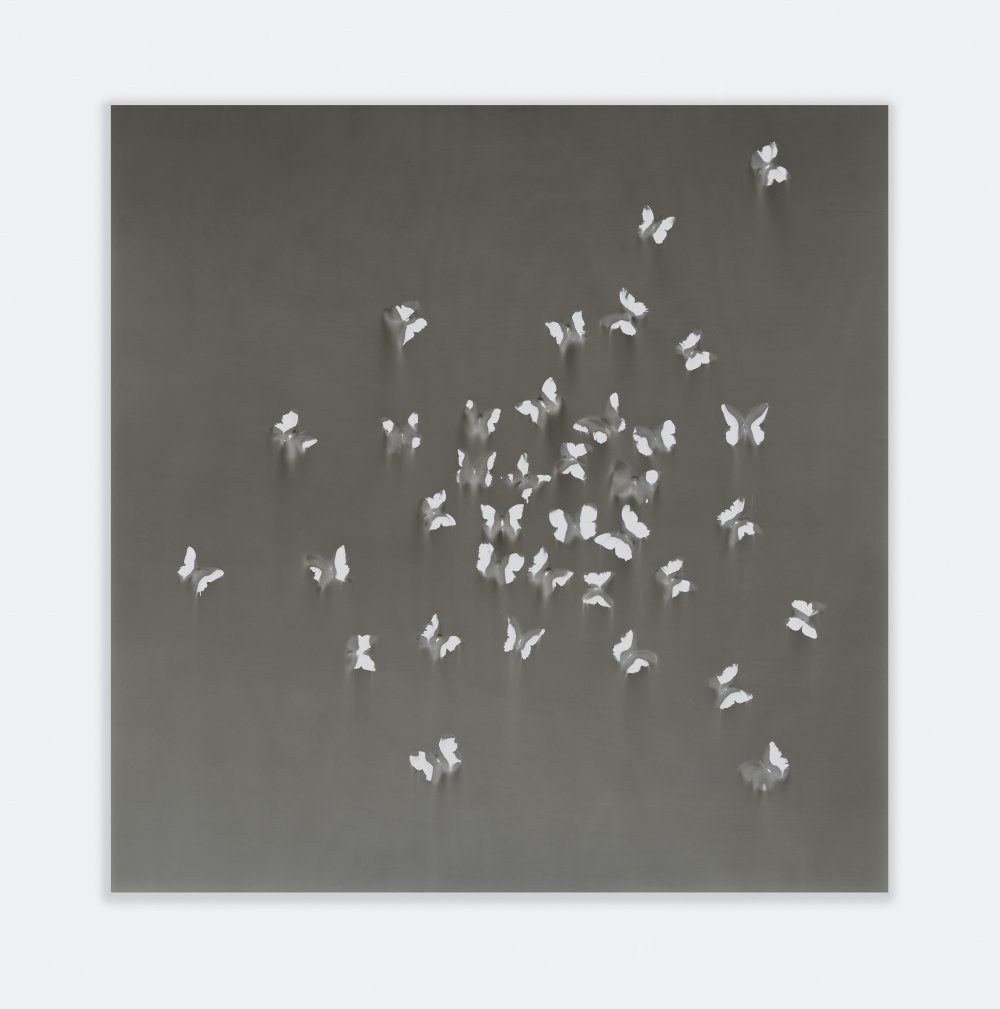 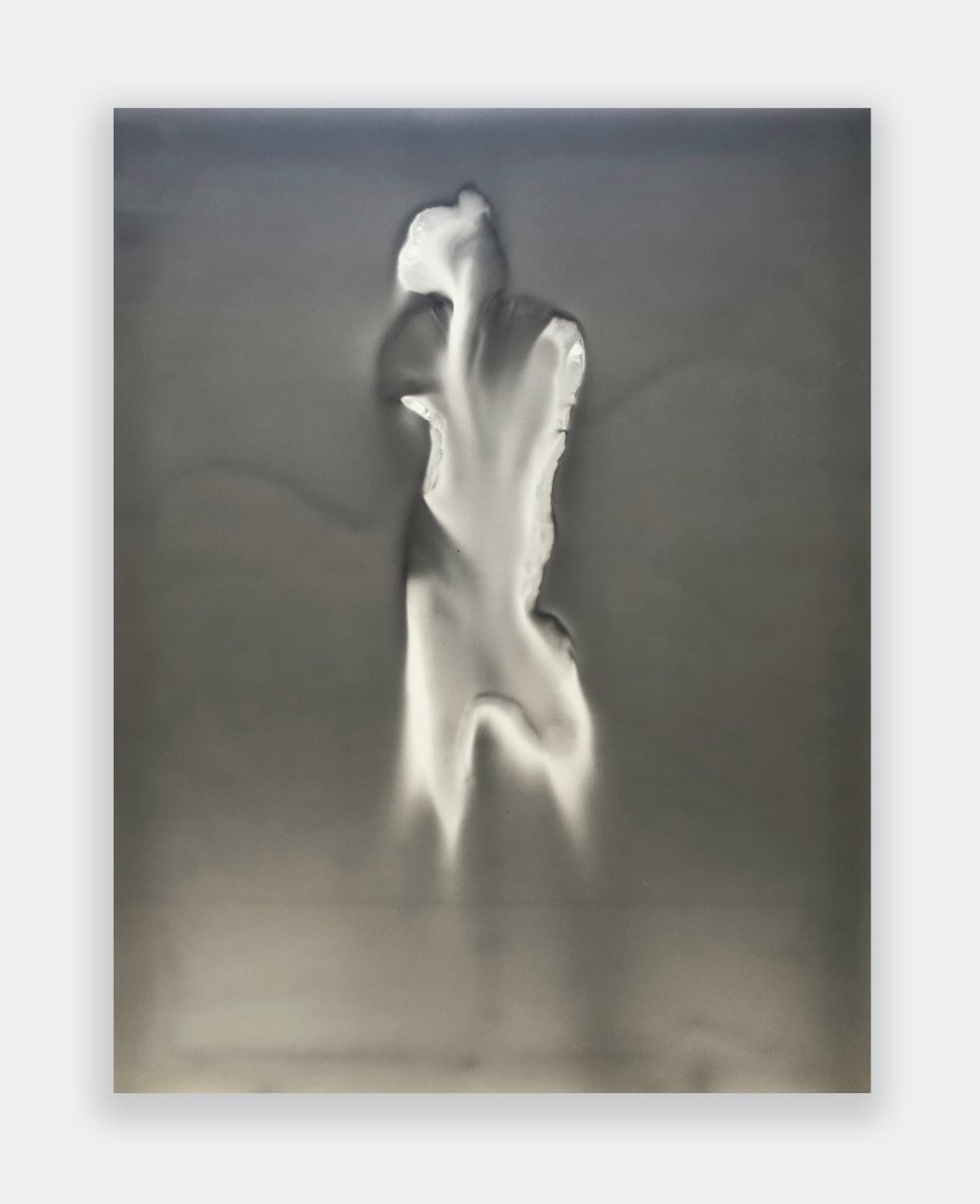 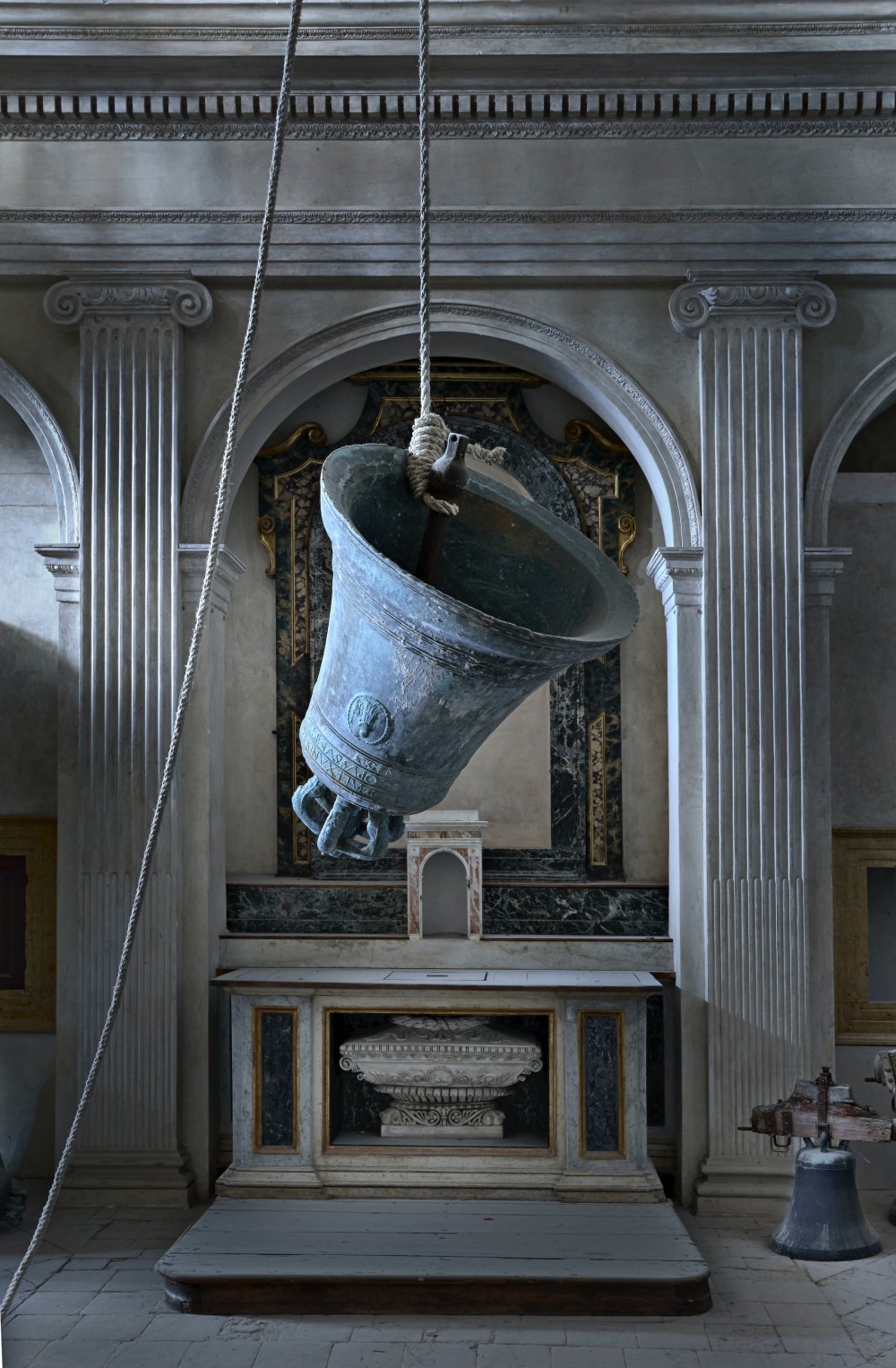 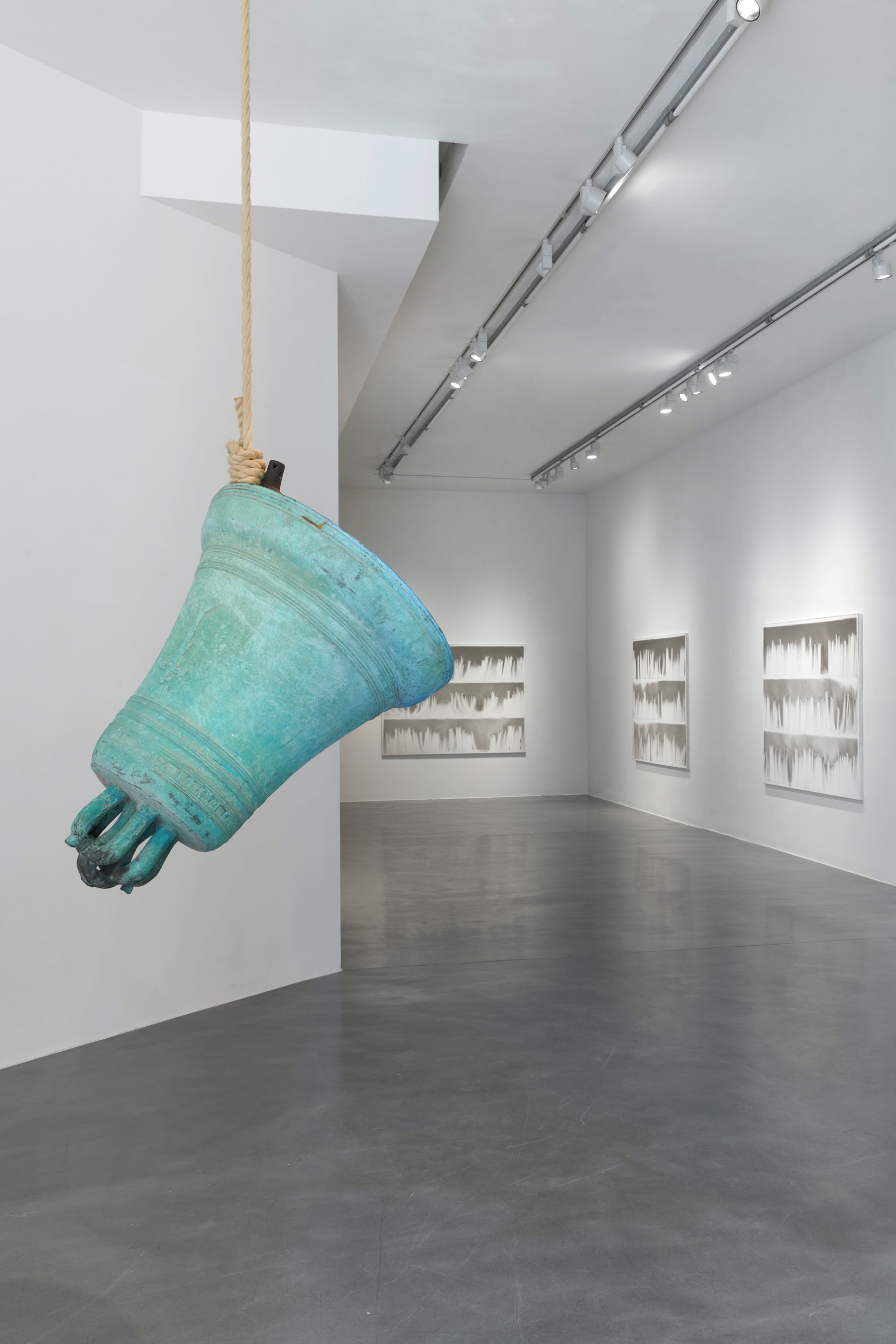 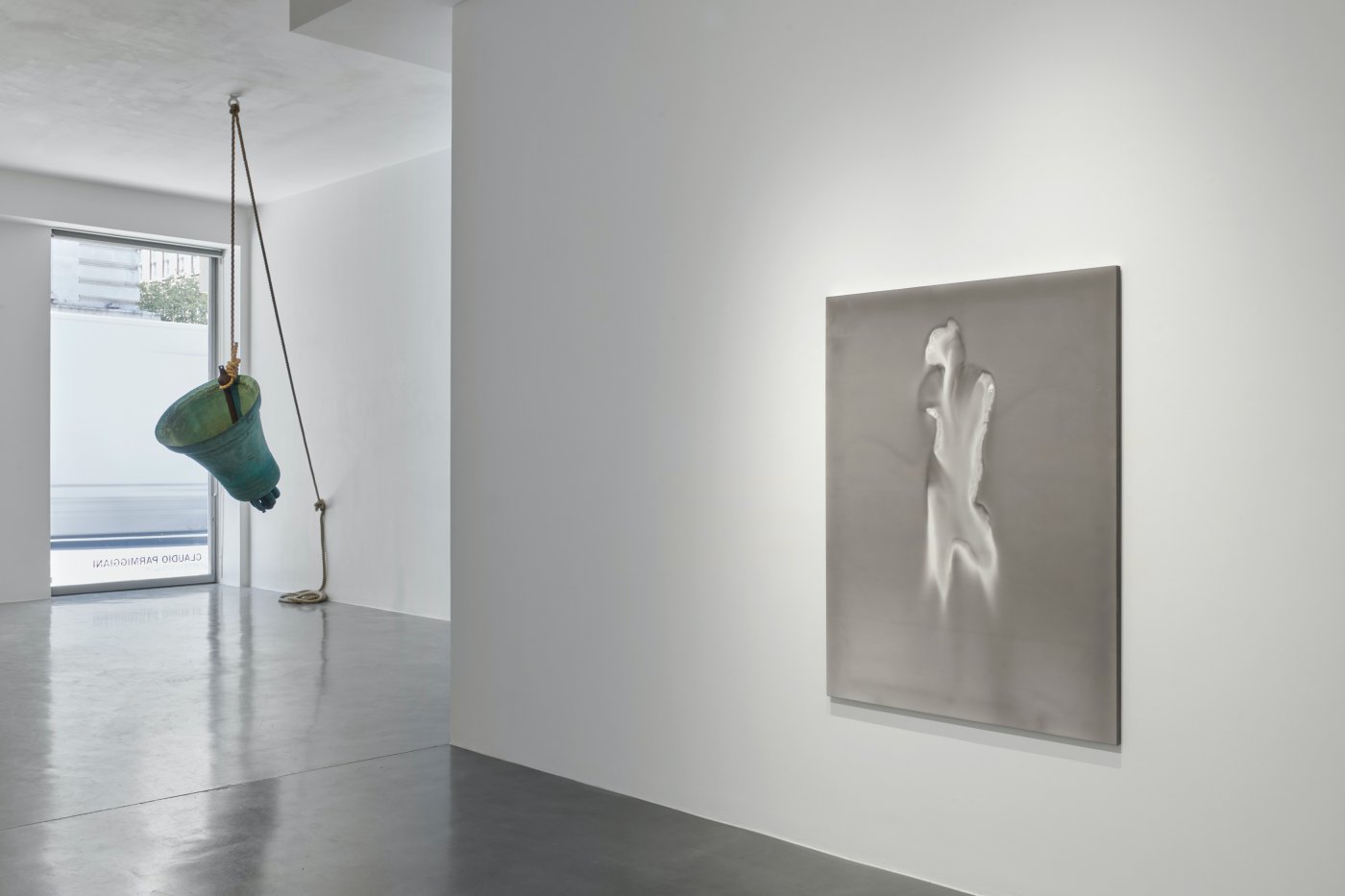 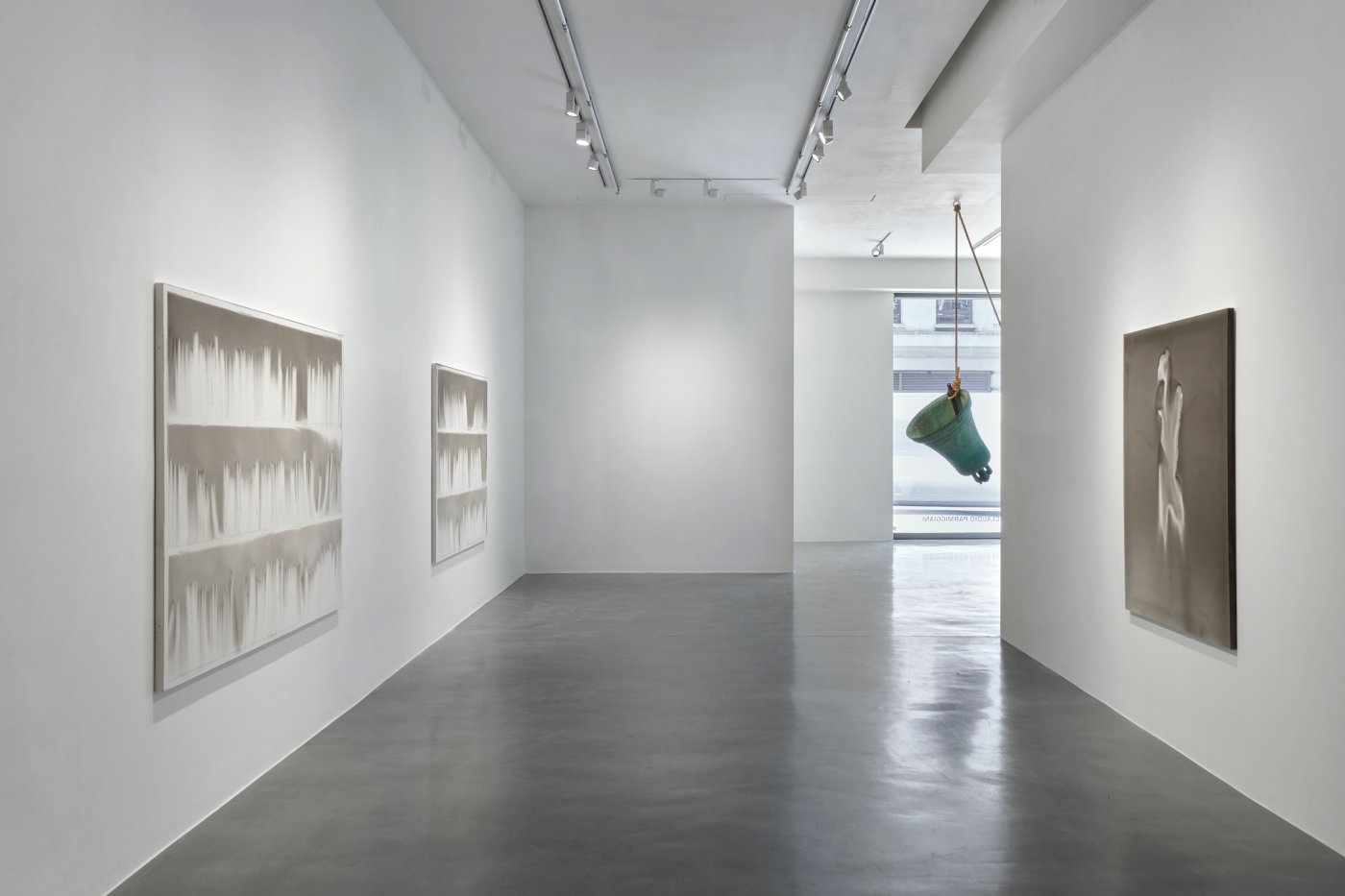 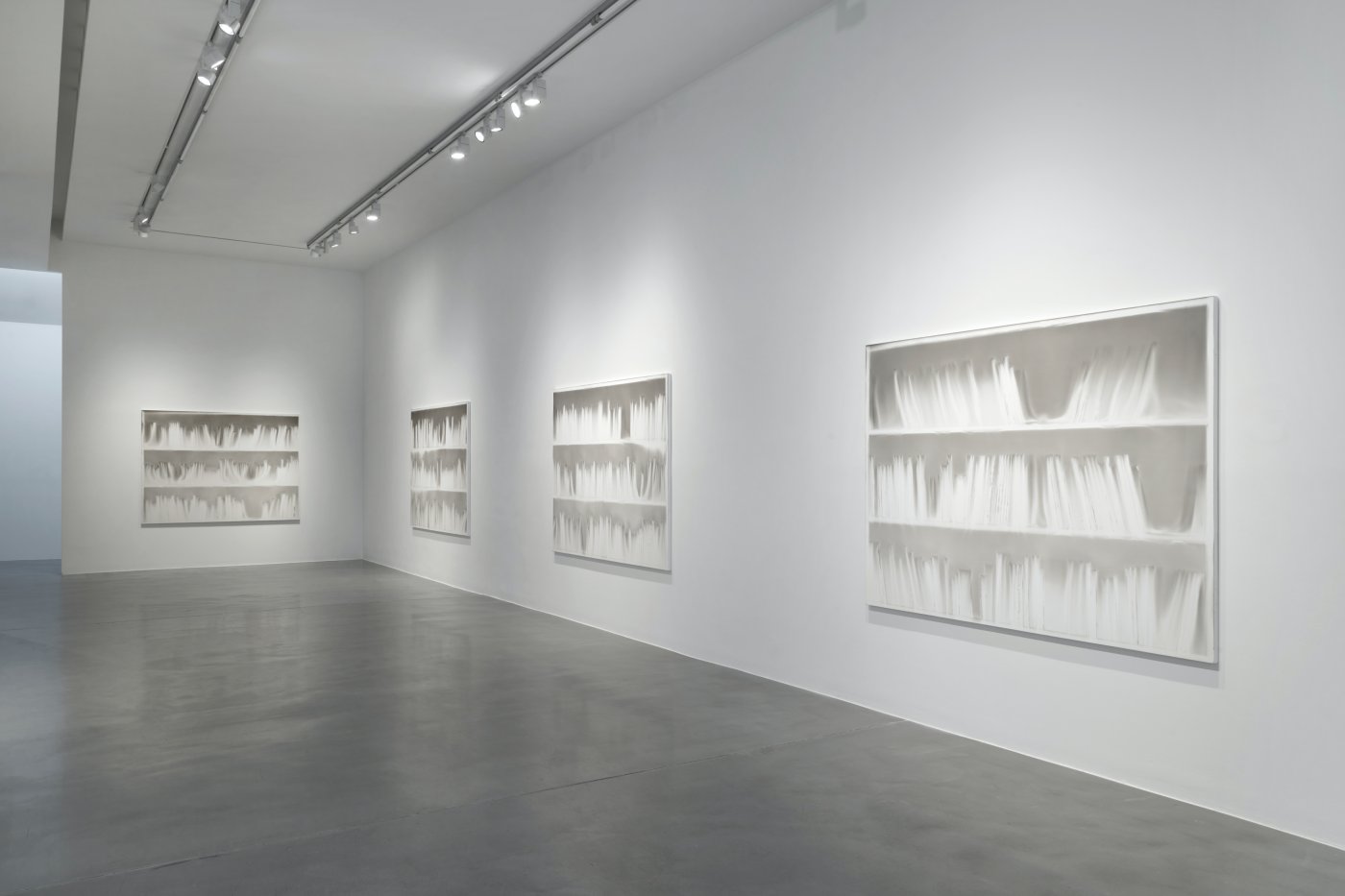 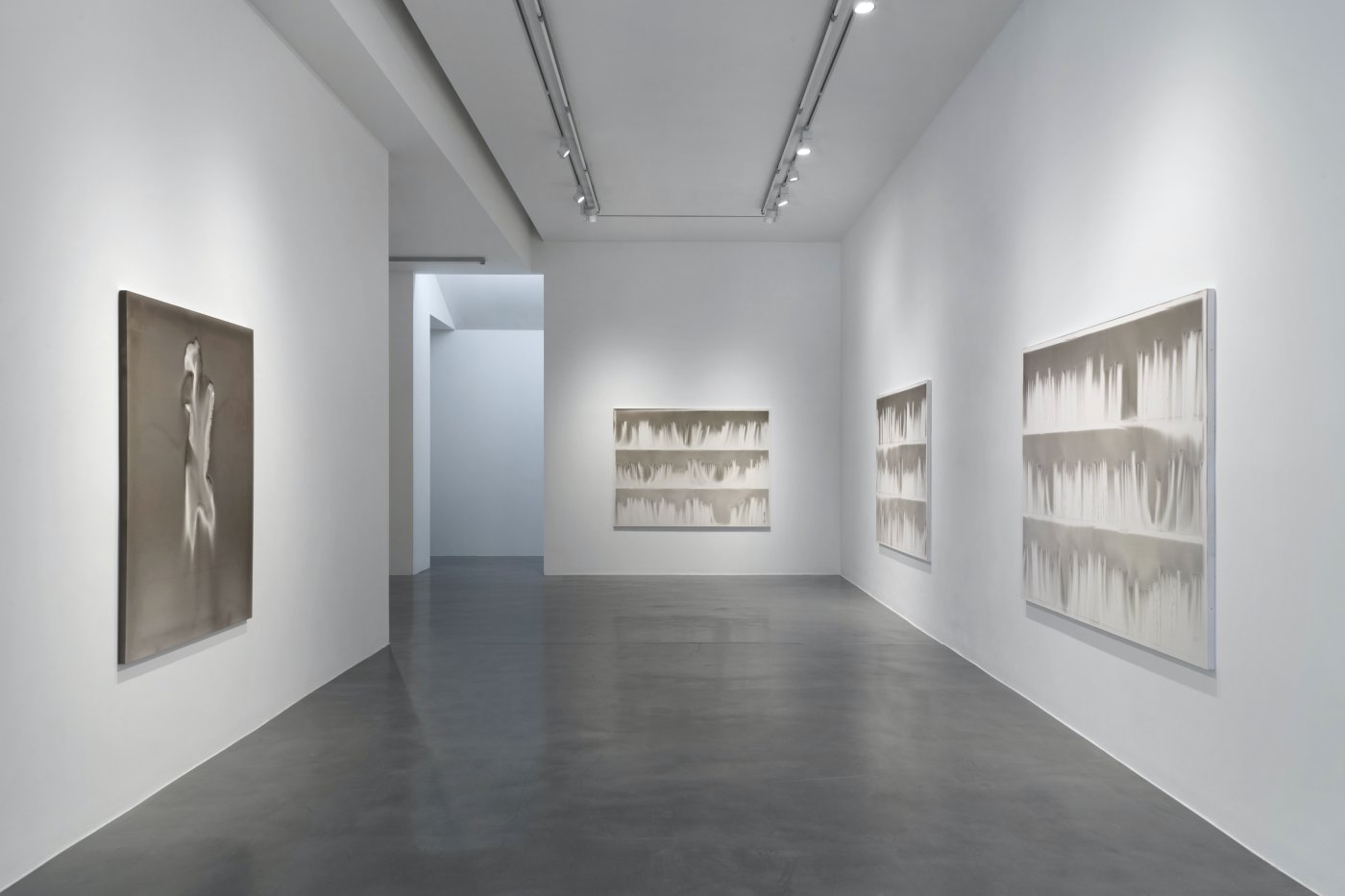 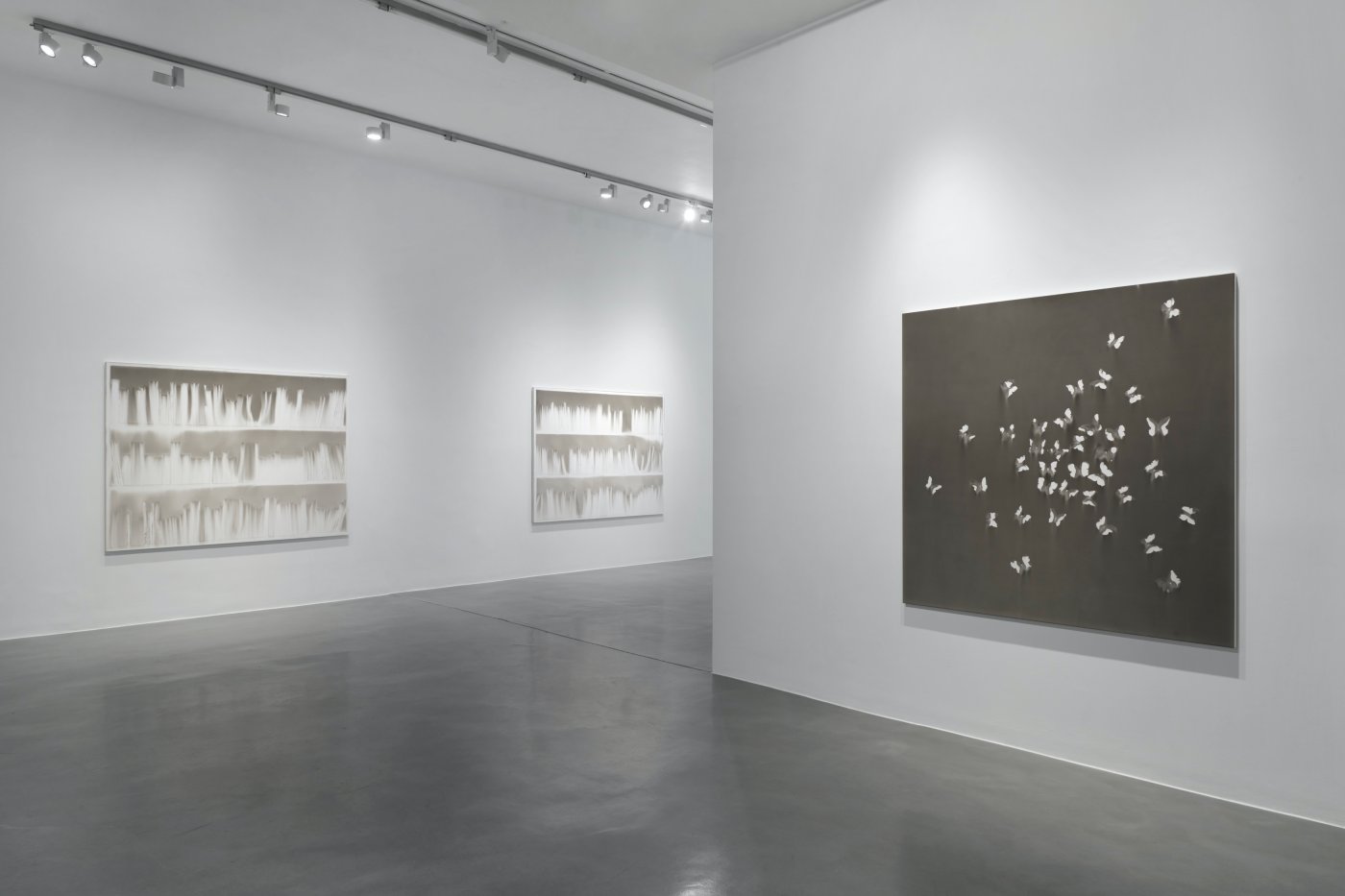 For the past 40 years Parmiggiani has concentrated his practice on themes of memory, absence and silence, in his search for an image, object or assemblage that transcends time and individual experience to evoke a universal, existential truth.

For his fourth presentation with the gallery and his third exhibition in the London space, Parmiggiani presents a suite of new Delocazione works. These panels, painted with smoke and soot, filled with the shadowy imprints of books, transform the empty gallery walls into a ghostly library. The volumes that line each shelf appear burnt, dematerialised from physical object to residual outline. Since Parmiggiani initiated the Delocazione they have become a recurrent and fundamental element of his oeuvre, amongst his most powerful expression of absence.

Contained in the middle of this haunting library, an old, cast iron bell rests on the floor. Rendered mute by its stasis, its silence feels forced, almost palpable. The stillness of the bell echoes through the gallery, magnified by the shelves, which house charred books similarly void of sound – their words eradicated. Parmiggiani has defined his installations as theatres in which silence is the performance. These works situate the potential of sound at the heart of silence: a silence of plenitude.

Over the course of his career Parmiggiani has developed a concise and powerful vocabulary, gathering objects, fragments and images which he chooses for their evocative power. The artist refers to the sources in this repository as ‘presences’. The book and the bell are an essential part of this lexicon and recurring motifs in his work. Presented in dialogue, they reinforce one another’s symbolic significance, revealing new connections in their elucidation of timelessness, humanity and antiquity.

In these new works, Parmiggiani ultimately articulates an ongoing commitment to his fertile investigation into the human condition and the footprints we leave behind; they invite us to reflect on our quest for knowledge and the fleeting impression we leave in the annals of history.