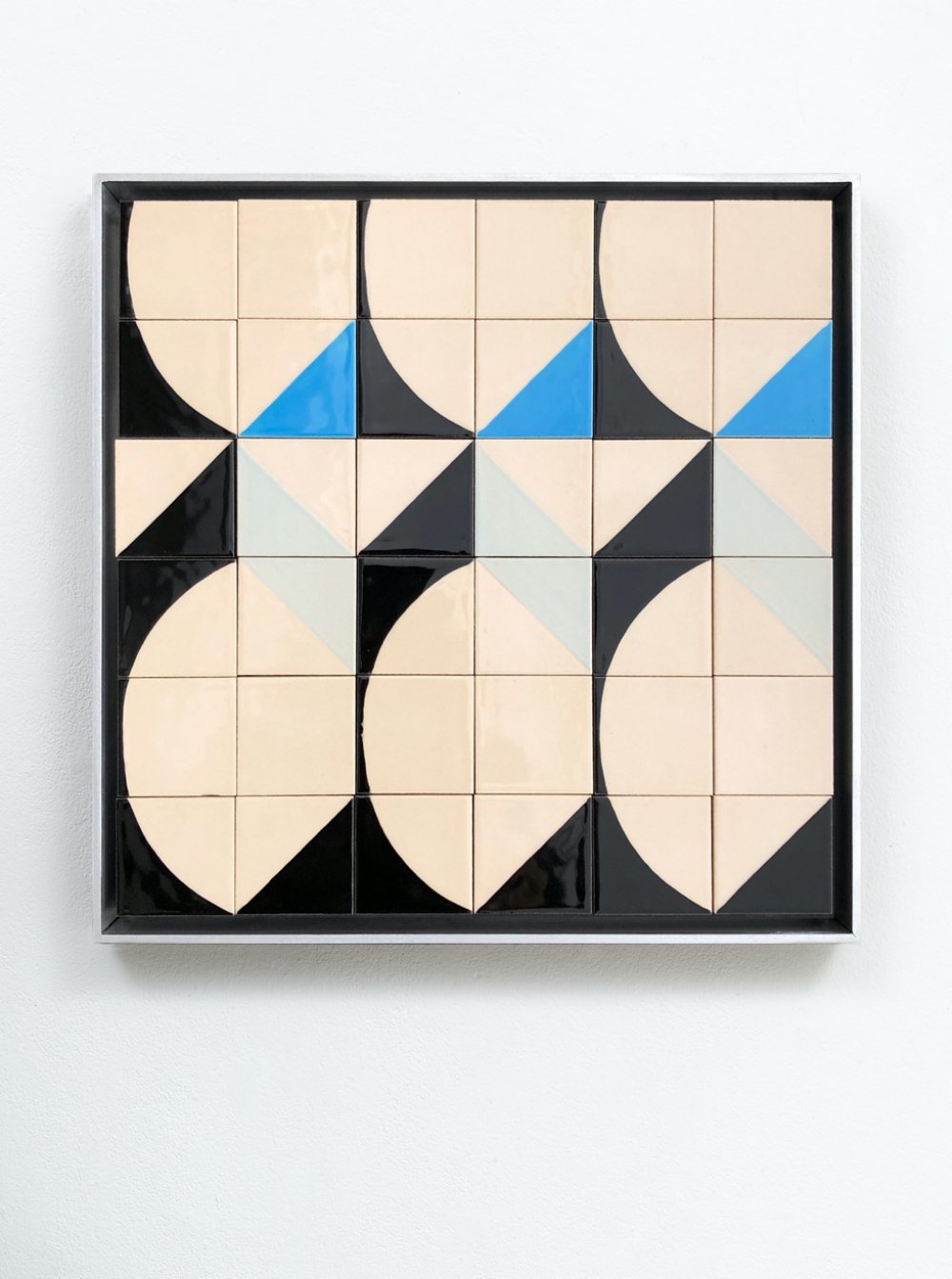 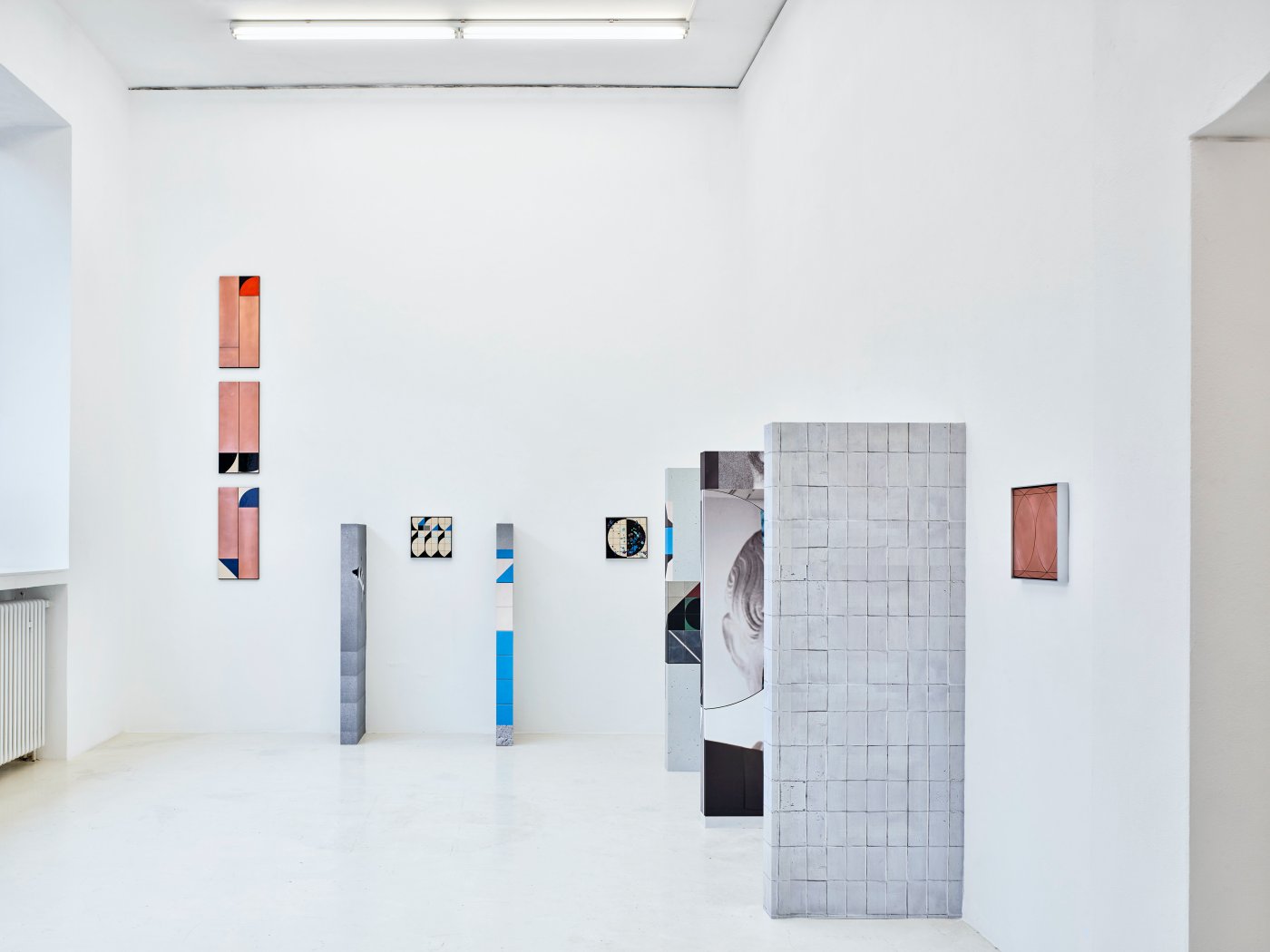 When you enter an installation by Claudia Wieser, you become immersed in a Gesamtkunstwerk. Geometric, often serial forms made of mirrored surfaces and bright colours, wooden pedestals and platforms covered with tiles, wall prints with details of found, casual looking photographs are all arranged to form loose stages. We move through a world of memories, rediscoveries and pure fantasy. The classical avant-garde, from Constructivism to Bauhaus, is as much a part of this as are references to interior design, film sets and theatre backdrops – Wieser’s art essentially consists of creating atmospheres that make us think and feel our surroundings in a new way.

For her fourth exhibition at Sies + Höke Galerie, she has separated the main room into small compartments: Mini-cabinets, covered in wallpaper, are placed along the gallery walls, with a feel of private rooms or relaxation areas. “Lobby” is the title of her exhibition – and with this association the artist already goes beyond the parameters of beauty, aesthetics, and harmony that are frequently ascribed to her work. Her 5 x 5 cm tile pictures, for example, have the effect of concrete thanks to a special glaze; smaller mirror works made of stainless steel and copper exude a smooth coolness, while artificial leather upholstery appears in other places. The lobby – a passageway and waiting area which does not give permission to linger, which we are familiar with from hotels, commercial venues and official institutions – becomes the open frame of a picture, in which we can abandon ourselves to a dreamlike relationship game of clear shapes, essential materials and figurative hints.

“I always work in dialogue – be it with the space, with the exhibition title or with an experience such as a play or film. But this trigger is less important for the viewer than for myself,” says Wieser. References to design, architecture and materials as well as to film, theatre and art, which Wieser has in mind when working, are therefore never named directly – rather they are like ghosts that the visitor senses intuitively. “My works are not didactic. I want to touch the viewer. Our existence, the human dilemma is always a background noise, even if it is never directly visible.”

In order to better understand Wieser’s work, one has to consider her four-year apprenticeship at the famous blacksmith’s workshop Bergmeister in Ebersberg, which she completed before taking up her studies with Axel Kasseböhmer and Markus Oehlen at the Munich Academy of Fine Arts. The workshop specialises in simple, early modern designs for clerical, cultural and political institutions. Wieser has never lost this connection to craftsmanship, in which pragmatic and artistic ideas merge (brought to perfection by the Bauhaus). With her, pedestals and mirror pieces, photo wallpapers, wall reliefs and podiums are always to be seen within a wider context, as elements in space that evoke a certain mood – and here we have come full circle, to Wieser’s long-standing work in the field of set design for film. Works of art, in her opinion, are never to be viewed in isolation, but are part of a certain atmosphere. Scenes and cultural cross references take place in front of the viewer’s inner eye, removing us from reality and allowing us to focus our attention on things that suddenly acquire qualities quite different from those that everyday life would ever have taught us. Just as one can read a reference to Romanticism and irrationality into classical modernism – one only has to think of Hilma af Klint and Emma Kunz’s inspirations through spiritual sessions, or the influence of Theosophy and occultism on artists such as Kandinsky, Klee, and Mondrian – Wieser’s works, in all their colourful patterned geometry and collage-like aesthetics, also have a tendency towards the dream, the atmospheric, and a departure from the everyday. Even if it is only a “lobby”.