I undertook to really do nothing. That is, to take inactivity to a level I’d never before reached. I even tried not to think. I could easily see myself spending a whole month this way.
–La Collectioneuse (Eric Rohmer, 1967)

“The true dance is an expression of serenity; it is controlled by the profound rhythm of inner emotion. Emotion does not reach the moment of frenzy out of a spurt of action; it broods first, it sleeps like the life in the seed, and it unfolds with a gentle slowness.”
-Isadora Duncan, “Depth,” in The Art of the Dance, p. 99 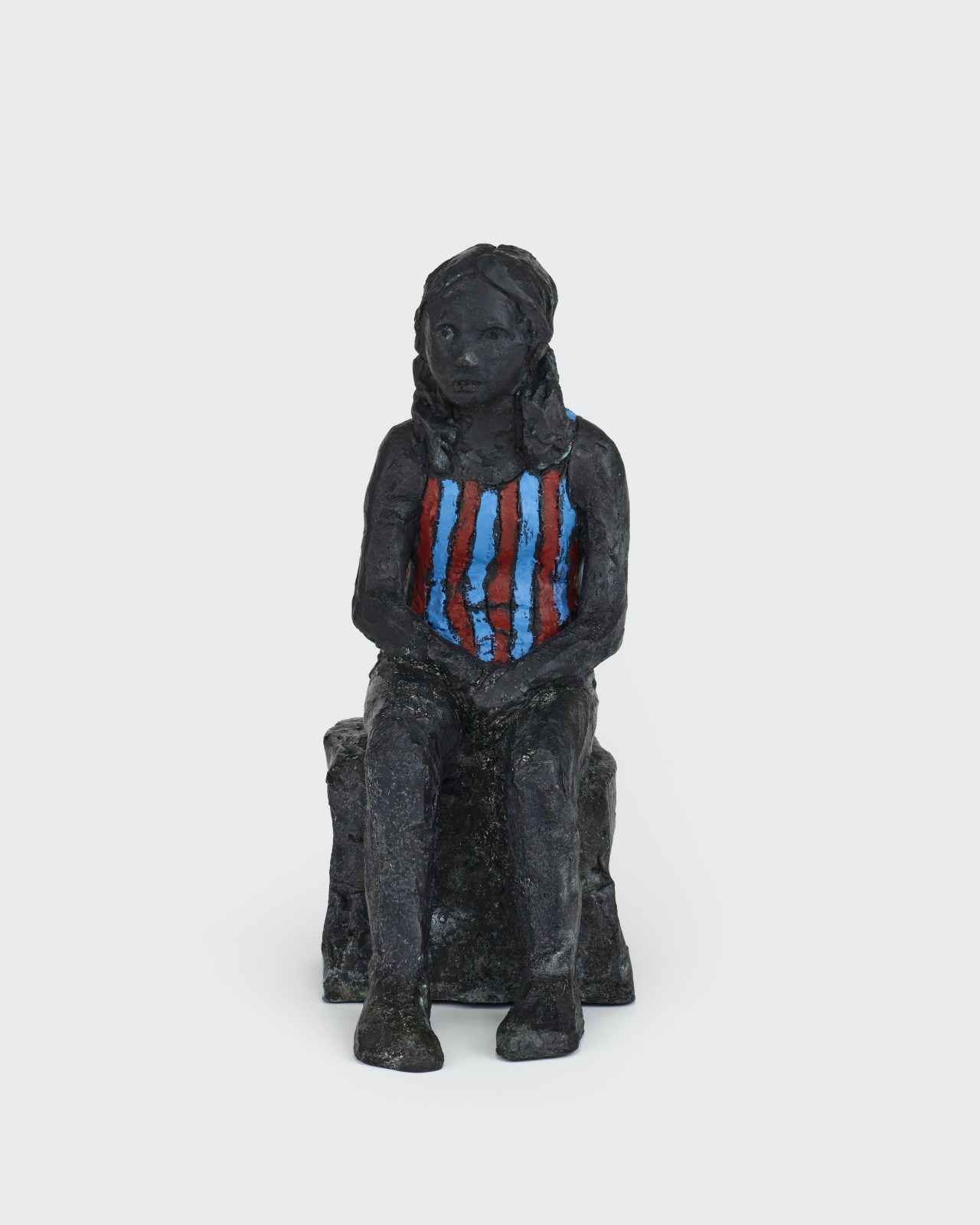 The cooling feeling of droplets of water on your body drying under the sun, after a dip in the water on a hot day. The endless hours curled up on one’s couch during periods of quarantine and isolation: reflection, moments of still withdrawal – resourcing creative energy, and imaginary focus. The ceaseless need to be patient combined with an urgency to keep going, to survive, to create, to invent. These are some of the associations—sensations, phenomenologies, anxieties—at play in new works by Claire Tabouret on view at Almine Rech in Paris from October 16 to December 18, 2021. A range of objects shows the artist continuing her explorations of painted portraiture and furthering her sculptural practice with three-dimensional objects and large-scale bronze fountains. There is not one single category represented by this body of work, but instead an almost rhizomatic response to an effluvia of artistic inspirations, to the challenges the world has faced over the last year, and, as always with the artist, all such creative stimuli are embedded in a soft flow of childhood experiences and the human condition.

On view are several fresh additions to Tabouret’s well-known group portraits. Unlike the homogeneous all-male Dutch group regents portraits of guild officers (regentenstück) that stand as art historical precedents (of which, Rembrandt’s Night Watch offers a towering epitome), the artist features women and children, in paintings that recall summer camp photos. There is an internal tension in these between the seemingly approachable nature of the sitters and the intense, pack-like poses, attitudes, and glares. These are works in which the figures become protagonists, with the viewer turning into the subject of their intense gazes.

In contrast and complement to these is another type of portrait for Tabouret: the self-portrait. Following previous forays into this typology over the last decade, she presents her own image tightly, cropped within the picture plane, right below her shoulders; she is seen by herself in profile, in three-quarters view, and frontally. There is a brazen intimacy with these self-depictions, but also a sense of remove or alienation. Unlike her group sitters, she hardly ever confronts the viewer’s gaze. With these works, Tabouret places herself in a lineage of women painters who have produced bravura self-portraiture, including seventeenth-century artists Sofonisba Anguissola, Artemisia Gentileschi, and Judith Leyster. At risk of oversimplification of a complex historical topic, one might say that, while excluded from the use of male models in studio practice, women turned to the most accessible and accommodating sitter: themselves. The result is most disarming, candid – and somehow, turns us, viewers, into the artist: surreptitiously, this act of looking inwards, into ourselves, becomes ours, through an unexplainable act of transfer, Tabouret offers us the means to slip inside her gaze – we gain access to our selves through her gaze.

This really is the germ of much of the new work in the show: the deeply personal output of an artist who, like many, experienced the COVID-19 pandemic with a requisite mixture of urgency and patience, the title of the exhibition, borrowed from a collection of essays by the writer Jean-Philippe Toussaint. There was the urgency of survival, of getting through these unprecedented times, of course, but also the urgency to create, to explore, to meditate, to use the time for producing something new, coupled with the need for patience. At the same time, – and this is an inherent part of the magical mystery and alluring generosity of the exhibition – these works are an invitation. They are deeply, unexplainably, participatory. Perhaps, because to some extent, we have all, in one way or another, been part of the pandemic nightmare, we are here summoned to undertake this journey through Tabouret’s studio ourselves. The change of packed emotions loaded in through this exhibition is largely owed to the fact that Tabouret, through this odyssey through her own studio, – and her own self – offers us to reprise ourselves. Amazing gift!

In many of these works, the intimacy of the artist’s studio rings through with both stentorian and subtle clarity. This is especially true in new works of sculpture on view. Although Tabouret has worked in three-dimensions before, this show marks her most sustained engagement with the sculptural form, and her first time working in the medium of cast bronze painted (a complex medium invented by Picasso with his Le verre d’absinthe, Spring 1914). The artist has described the shift into sculpture as a natural move of her 2D characters into the 3D realm. There are small-scale works in various media, including wood, terracotta, plaster, and bronze, presented on a wooden table made by the artist’s fiancé, Nathan Thelen. The generosity of this gesture, in keeping works in the realm of the accessible and not isolated on plinths or pedestals, harkens back to the display and use of bronze statuettes in the Renaissance, when collectors, often erudite scholars, kept objects in their studies, and found joy in handling them, turning them around in their hands, pontificating on their subject matter and facture. The haptic, sensuous dimension of these works cannot be overemphasized, as they yield a ceaseless interplay between gazing, touching, sensing, living.

One of the largest new works in the show is a fountain in the form of two life-size women, one seated and one standing, cast in bronze. The seated figure bows her head slightly, her back rounded, like an adolescent harboring a self-conscious, slightly awkward posture. There are also several related smaller bronzes of the same seated woman motif which have been hand-painted by the artist, in a direct reference to Picasso’s own controversial painting of his bronze sculptures, most notably his Le verre d’absinthe (1914). Typically, bronze sculpture is chased and finished smoothly, while often patinated with a dark chemical solution or painted on with lacquer that enhances its material properties but does not embellish or decorate it in any way. Tabouret’s bronzes insist on the tactile, rough finish of the hand-sculpted clay model – their raw presence and viscerality is essential.

Tabouret’s engagement with the art of Picasso has flowed from an ongoing dialogue, and in conjunction with the artist’s gallery display of her recent works, an installation of a second new large-scale bronze fountain will be presented at the Musée Picasso of a single seated woman. In these aqueous works, which reference Picasso’s Three Women at the Fountain (1921), Tabouret foregoes the typical pomp and circumstances of many fountains opting, instead, for a more subtle flow of water across the statue’s surface rather than powerful jets or sprays. This project collapses the distance, or the chasm, between the grandiose, trans-personal, and awe-inspiring gravitas of most outdoors fountains, and Tabouret’s own deep intimate, haptic project that returns us cogently to this ephemeral moment, on a hot summer day, when droplets of water with residuals of sweat and salt, leave an imperceptible microscopic film of crackling minerals (salt, sand, dust), stretching across the sun-drenched surface of the skin.

Tabouret’s radical humanism reintroduces layers and depths of imagination seldom activated within the field of sculpture. In summary, Tabouret’s work incarnates a few lines by Gaston Bachelard, first published in 1942, which could have been written specifically for the artist:

‘Conversely, this working, controlling hand learns the essential dynamic genius of reality while working with a matter that resists and yields at the same time, like passionate and rebelliou flesh. It amasses all ambivalences. Such a working hand needs an exact mixture of earth and water in order to realize fully what constiJ tutes matter capable of form, substance capable of life. To the unconJ scious of the man who kneads the clay, the model is the embryo of the work; clay is the mother of bronze. Therefore I cannot emphasize too much how important the experience of fluidity and pliability is to an understanding of the psychology of the creative unconscious.’
-Gaston Bachelard, in Water and Dreams, (translated by Edith R. Farrell), p. 13