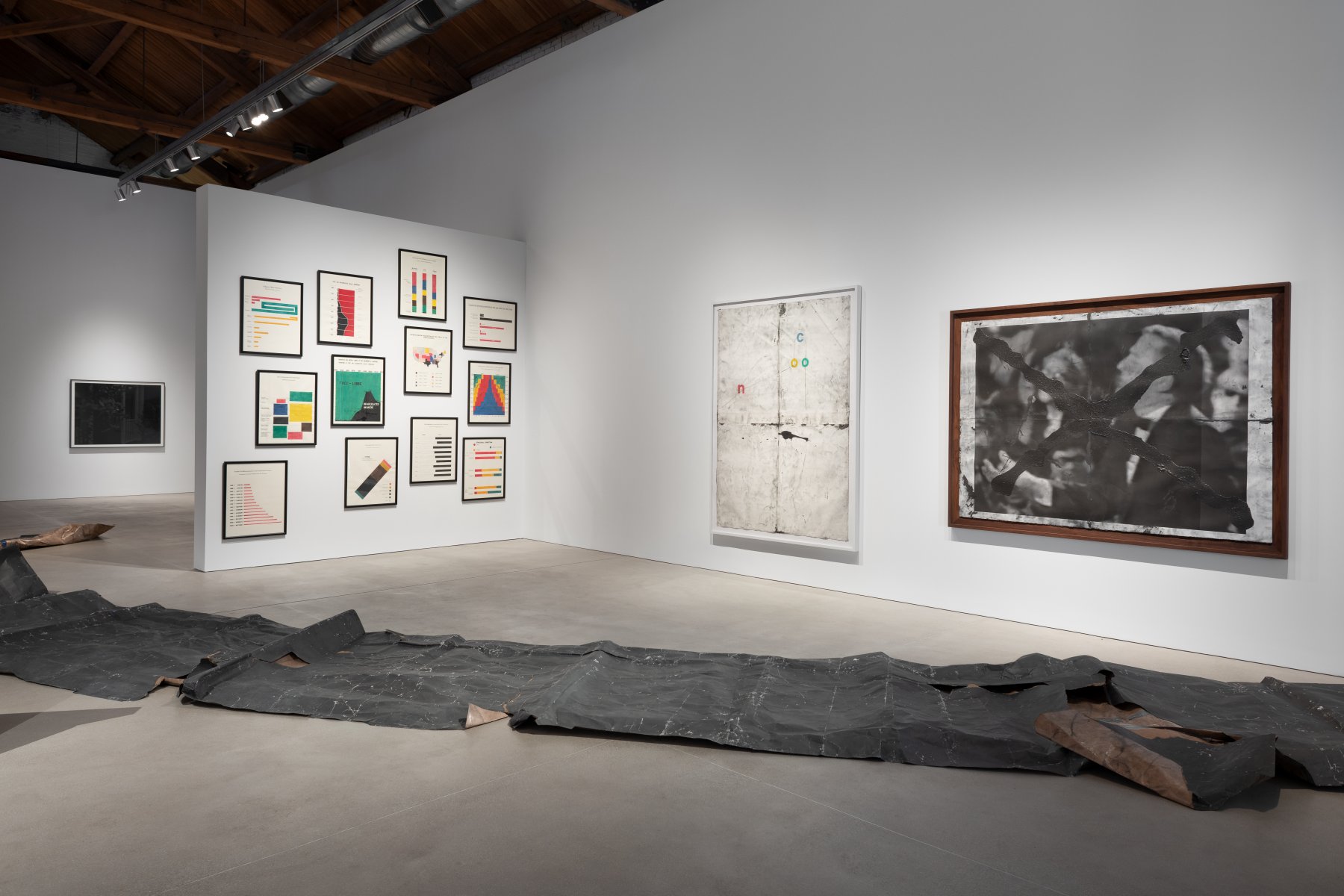 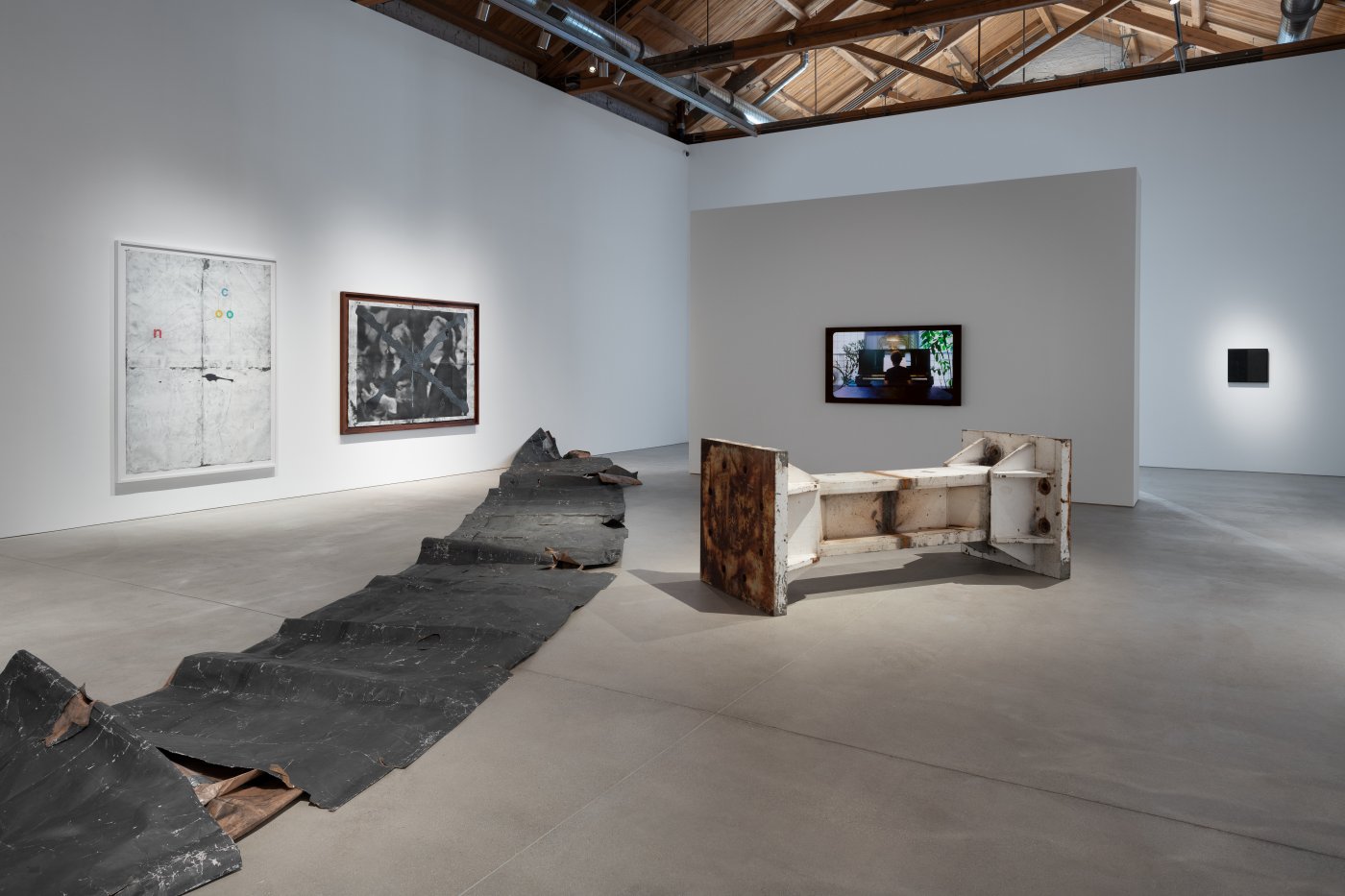 “Space, some will say, is not intrinsically racially specific,” says Crawford. “And yet there are some locations and territories that read obviously and overtly as ‘black space’—zones that have some connectivity to black peoples’ lives, history, and culture. In this sense, black space is cultivated or fostered regularly and variously.”

With works ranging from painting, print, installation, and drawing to photography, sound, video, film, and performance, the exhibition examines periodic iterations of black space. Dawoud Bey’s photographic series Night Coming Tenderly, Black, for example, speaks to historical notions of black space, capturing seemingly innocuous sites obscured under the veil of night. Devoid of discernible architectural elements, the depicted spaces invoke the narrative of the Underground Railroad and the existence of freedom spaces that emerged following laborious journeys to the North.

Examining black space as a contemporary ideal, Rashid Johnson adopts an aspirational perspective in Black & Blue, a video in which he interprets the exclusive Long Island vacation destination of the Hamptons as black space and envisions the purported “good life” that has been rigorously gate-kept from black and brown communities. Using his family as the protagonists of the film, Johnson tessellates domestic scenes of affluence commonly associated with whiteness onto non-white figures.

Amanda Williams’s contribution to the exhibition, Tulip Project, questions and reinterprets redlining, one of the systematic physical constructs that has historically demarcated black space. Williams will plant red tulips along parcels of land on Chicago’s South Side to explore how social and political traditions create and transmit forms of belonging. Utilizing the ubiquitous flower, Williams redesignates spatial value in an act of remembrance of redlining policies that delineate black urban areas.

Additionally, Citing Black Geographies affirms black roots in the American South with a contemporary live recording by the Staples Jr. Singers, “When Do We Get Paid (In Full),” coproduced by Crawford and the record label, Luaka Bop.

Crawford positions Citing Black Geographies as an intentionally open-ended project. Reaffirming notions of black space while also challenging them, the exhibition externalizes black space as a concept as fictitious as it is aspirational, suggesting that it is not as clearly defined and fixed as it seems; that it is as liberatory as it is confining; and that it is sometimes not a physical space at all, but rather a pervasive and looming atmosphere.

PUBLICATION | To accompany the exhibition, GRAY is pleased to release an in-depth publication featuring an essay by curator Romi Crawford and detailed illustrations of the artworks in the exhibition.

ABOUT ROMI CRAWFORD | Romi Crawford, PhD, is a professor in the visual and critical studies and liberal arts departments at the School of the Art Institute in Chicago. Her research explores areas of race and ethnicity as they relate to American visual culture including art, film, and photography, as well as the logics of black artistic and aesthetic inheritance in the form of archives and intergenerational collaboration. Crawford is the editor of Fleeting Monuments for the Wall of Respect (Green Lantern Press, 2021); coeditor of The Wall of Respect: Public Art and Black Liberation in 1960s Chicago (Northwestern University Press, 2017); and the author of many essays including “Surface and Soul in the Work of Nick Cave,” in Nick Cave: Forothermore (DelMonico Books/Museum of Contemporary Art Chicago, 2022), and “Reading Between the Photographs: Serious Sociality in the Kamoinge Photographic Workshop,” in Working Together: Louis Draper and the Kamoinge Workshop (Duke University Press, 2020). She initiated and conceived the Black Arts Movement School Modality in 2021 and was previously curator and director of the education department at the Studio Museum in Harlem.