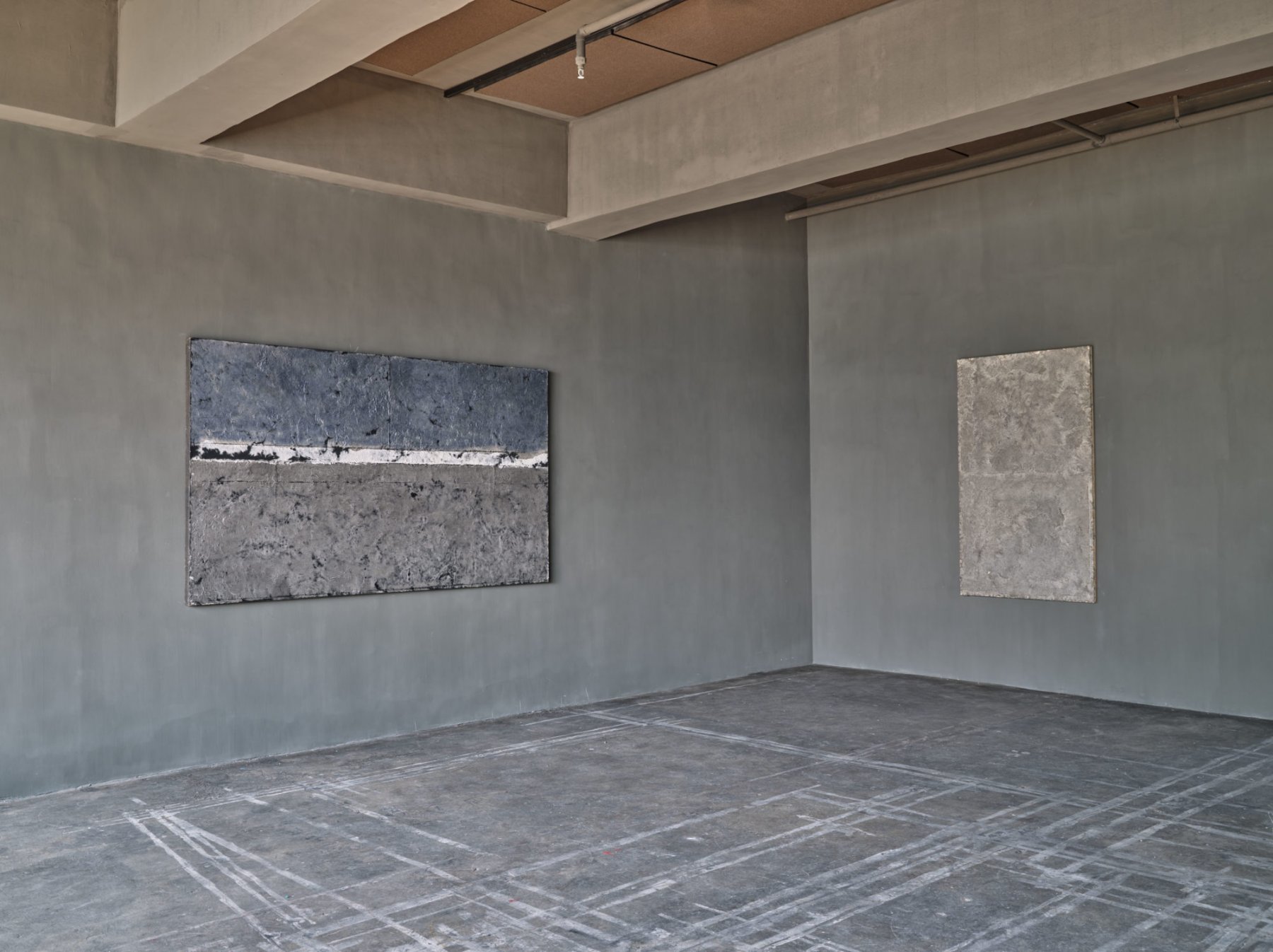 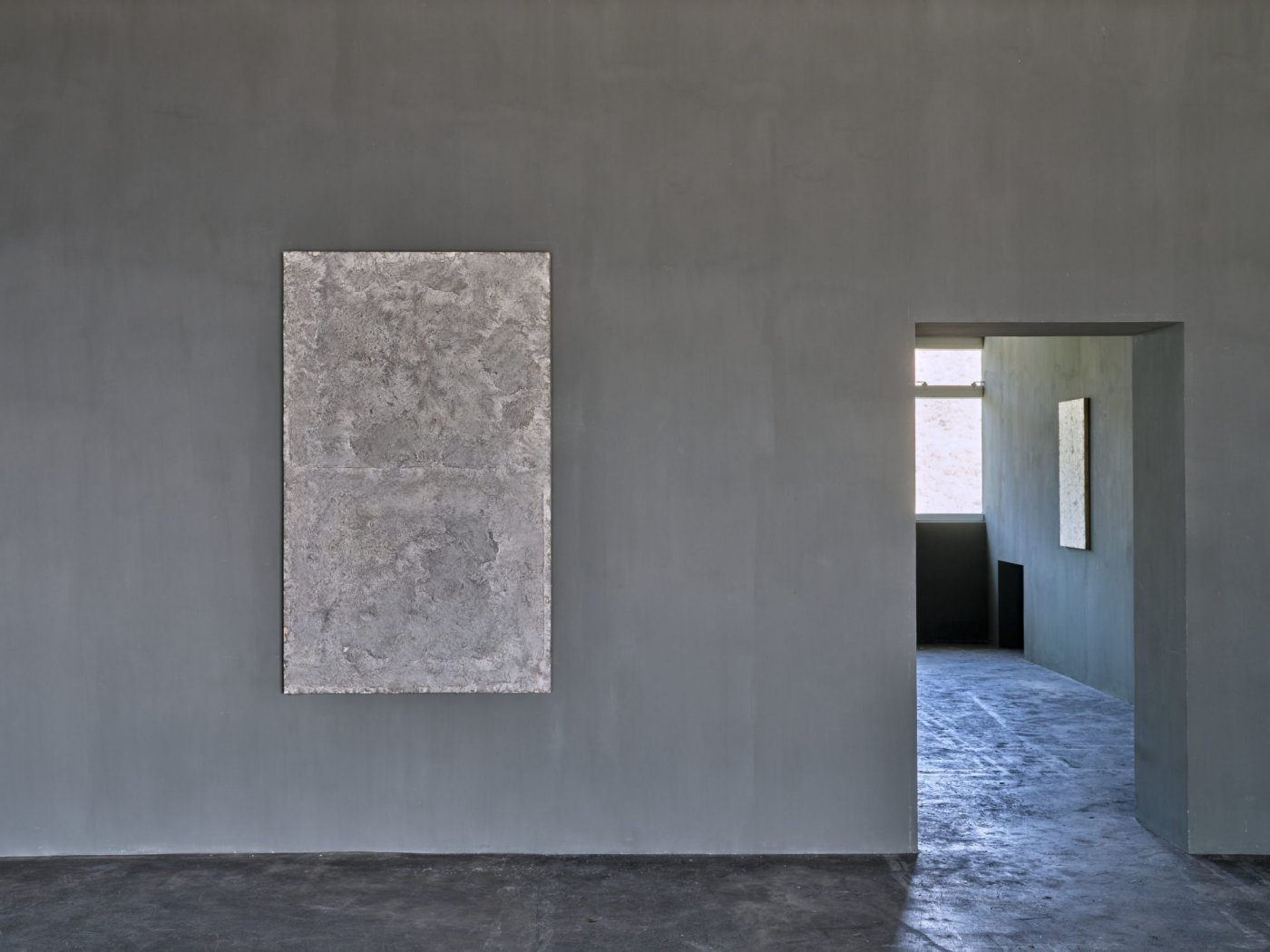 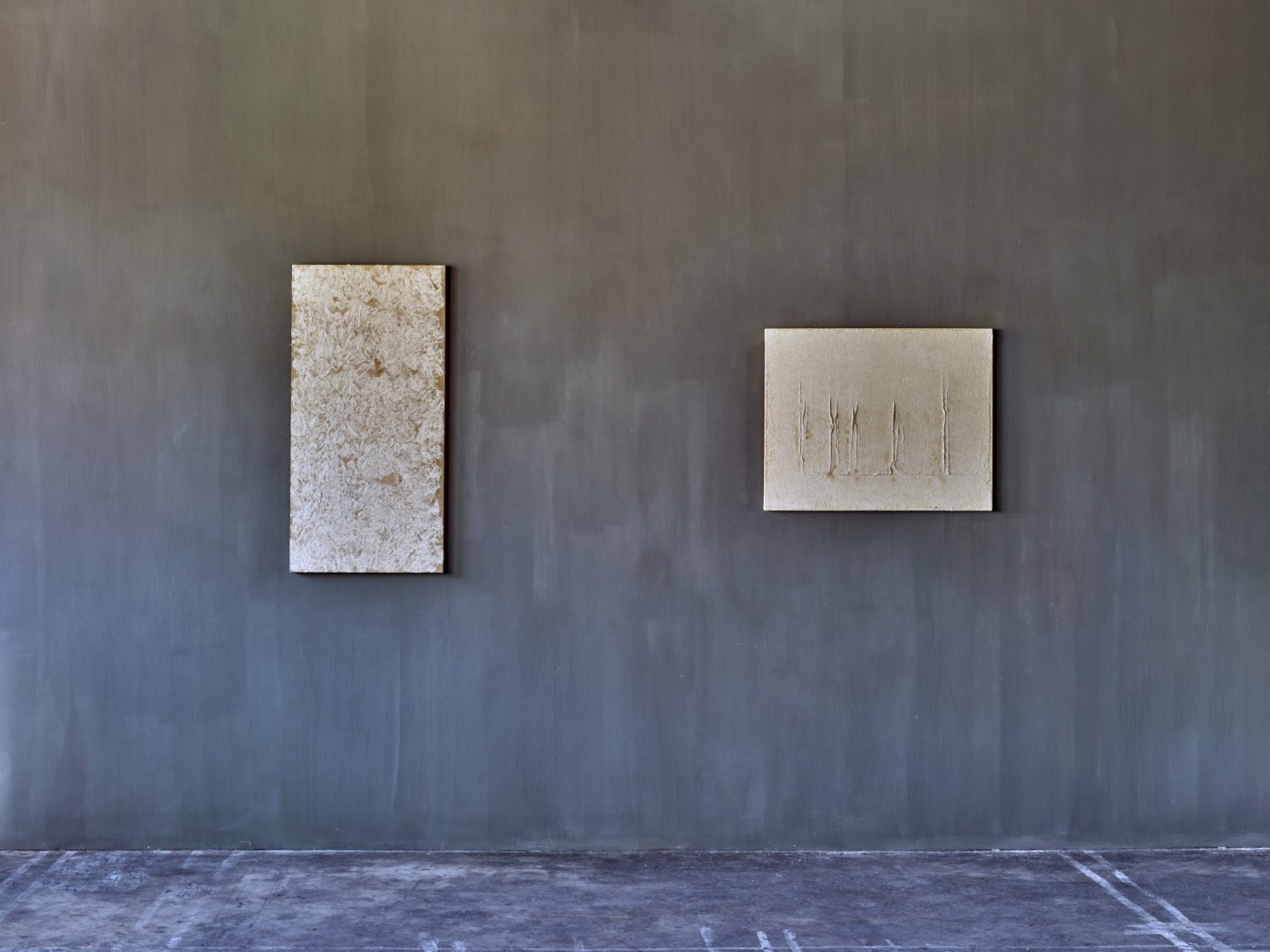 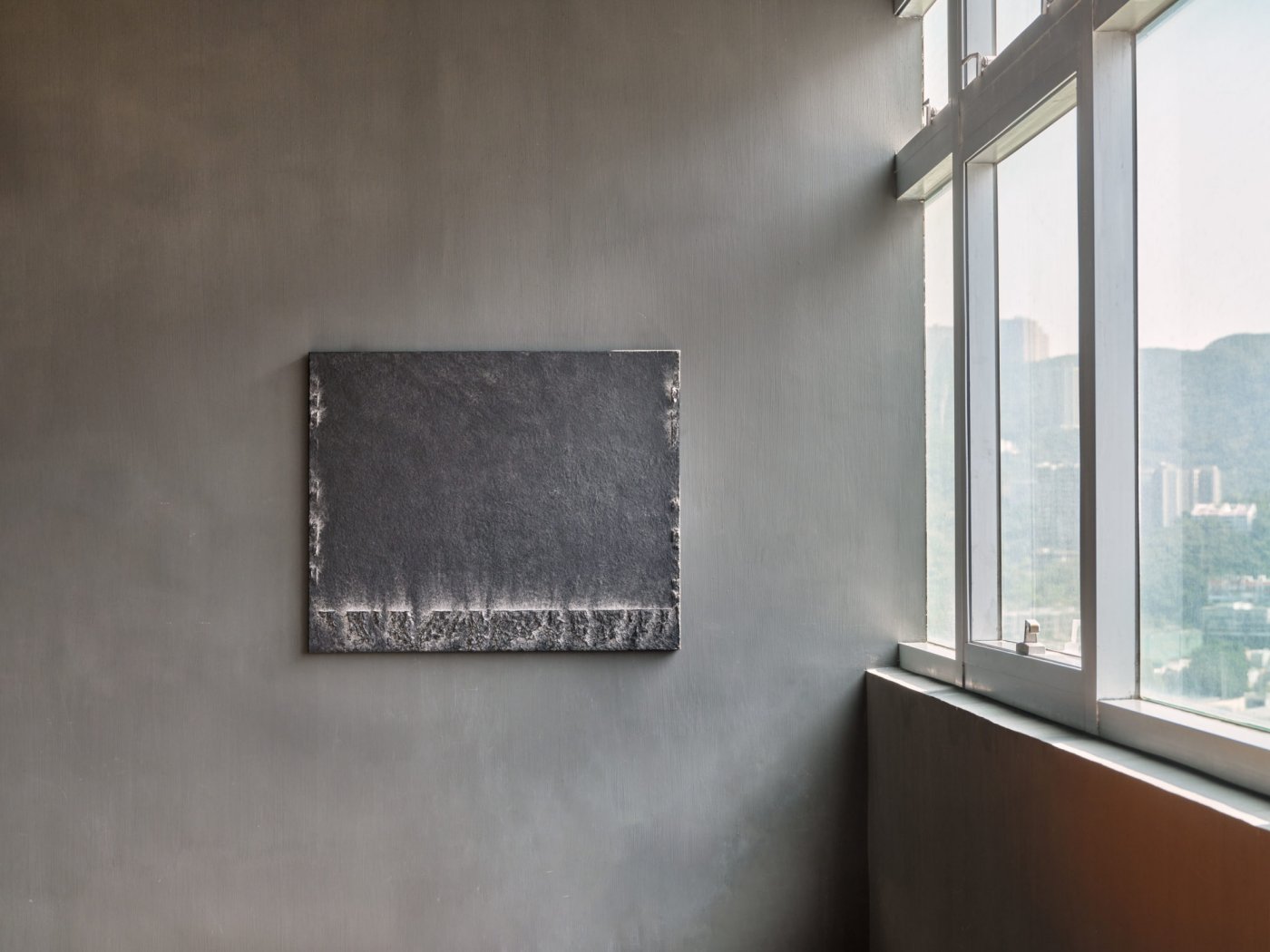 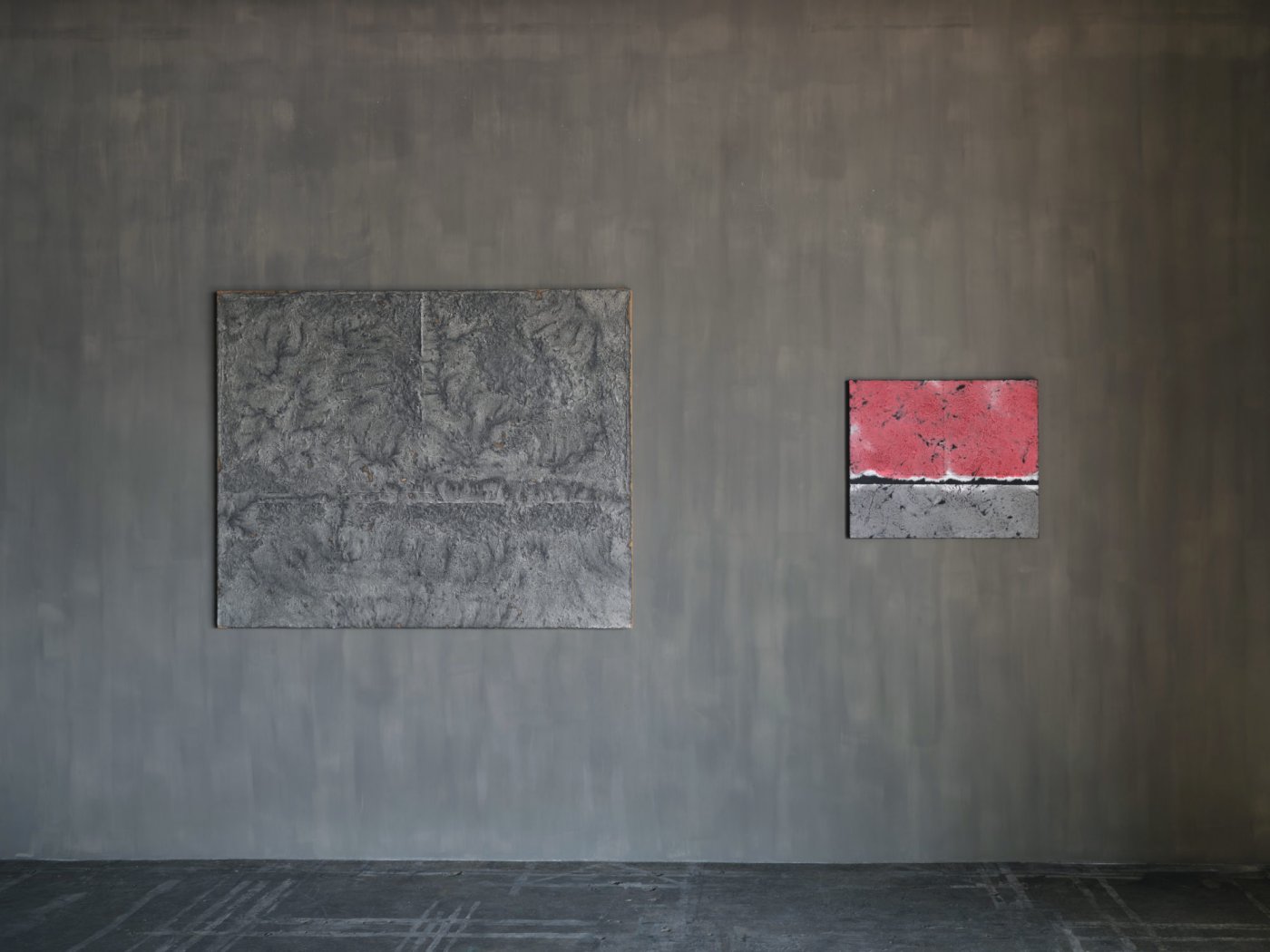 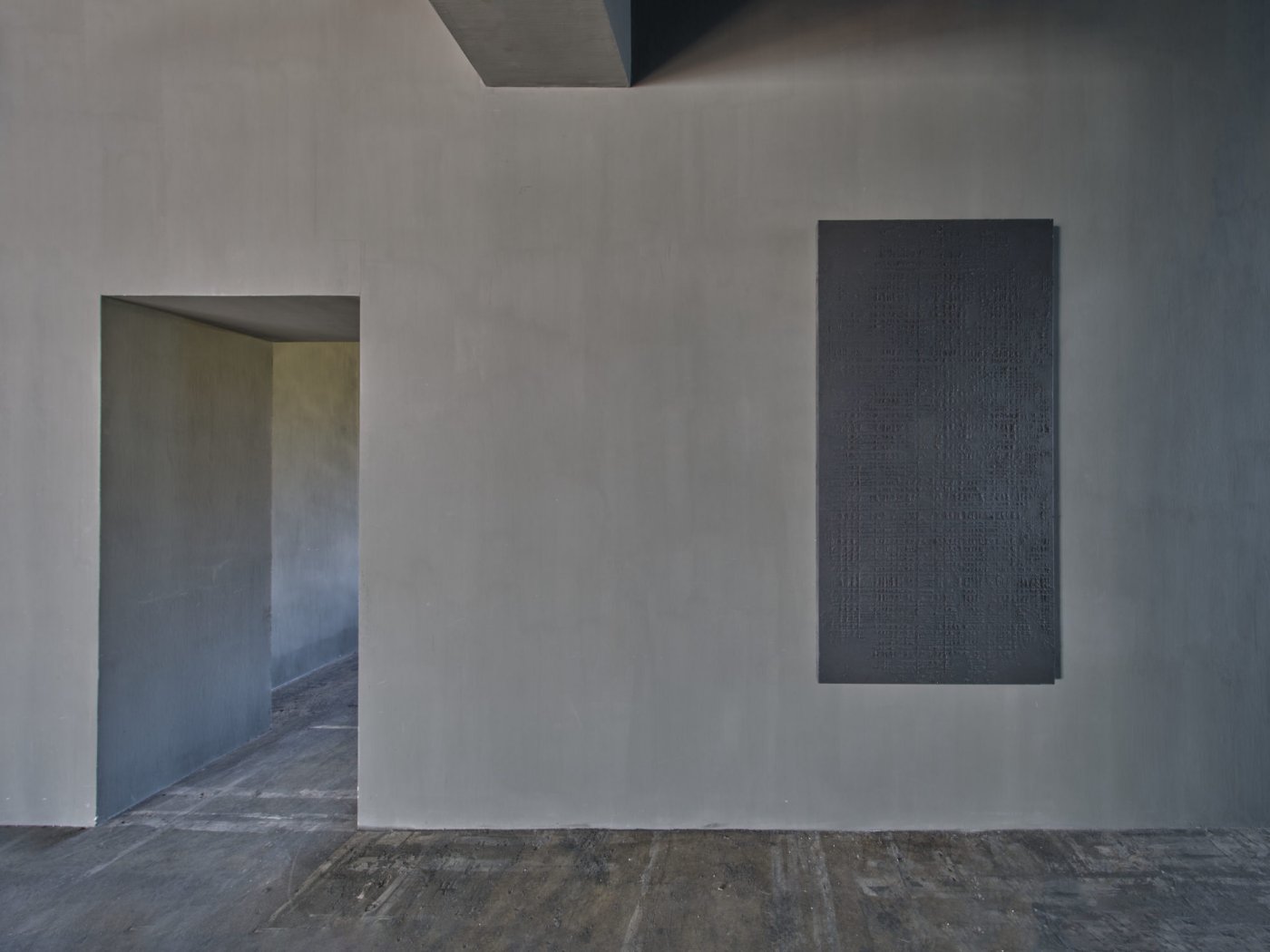 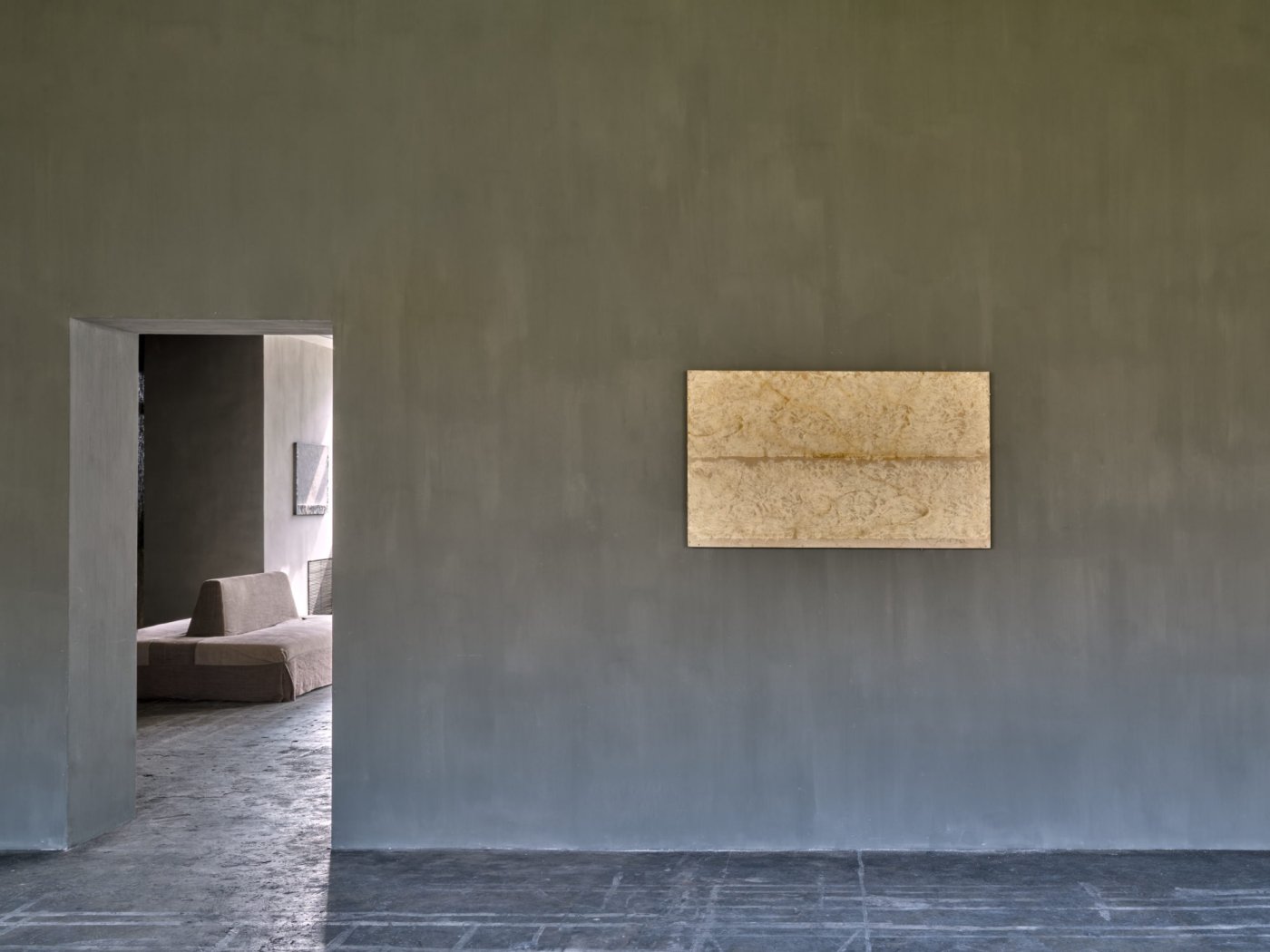 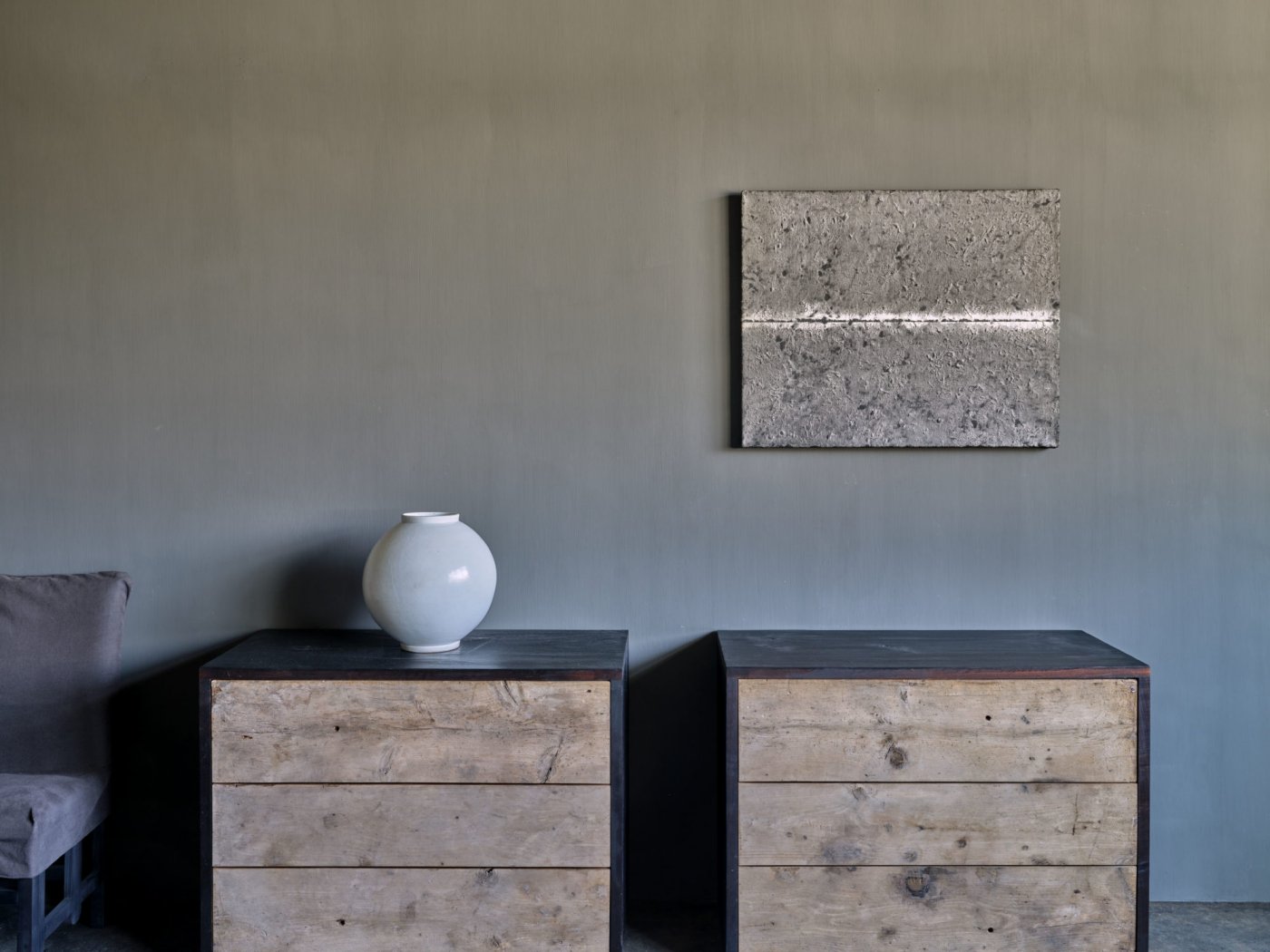 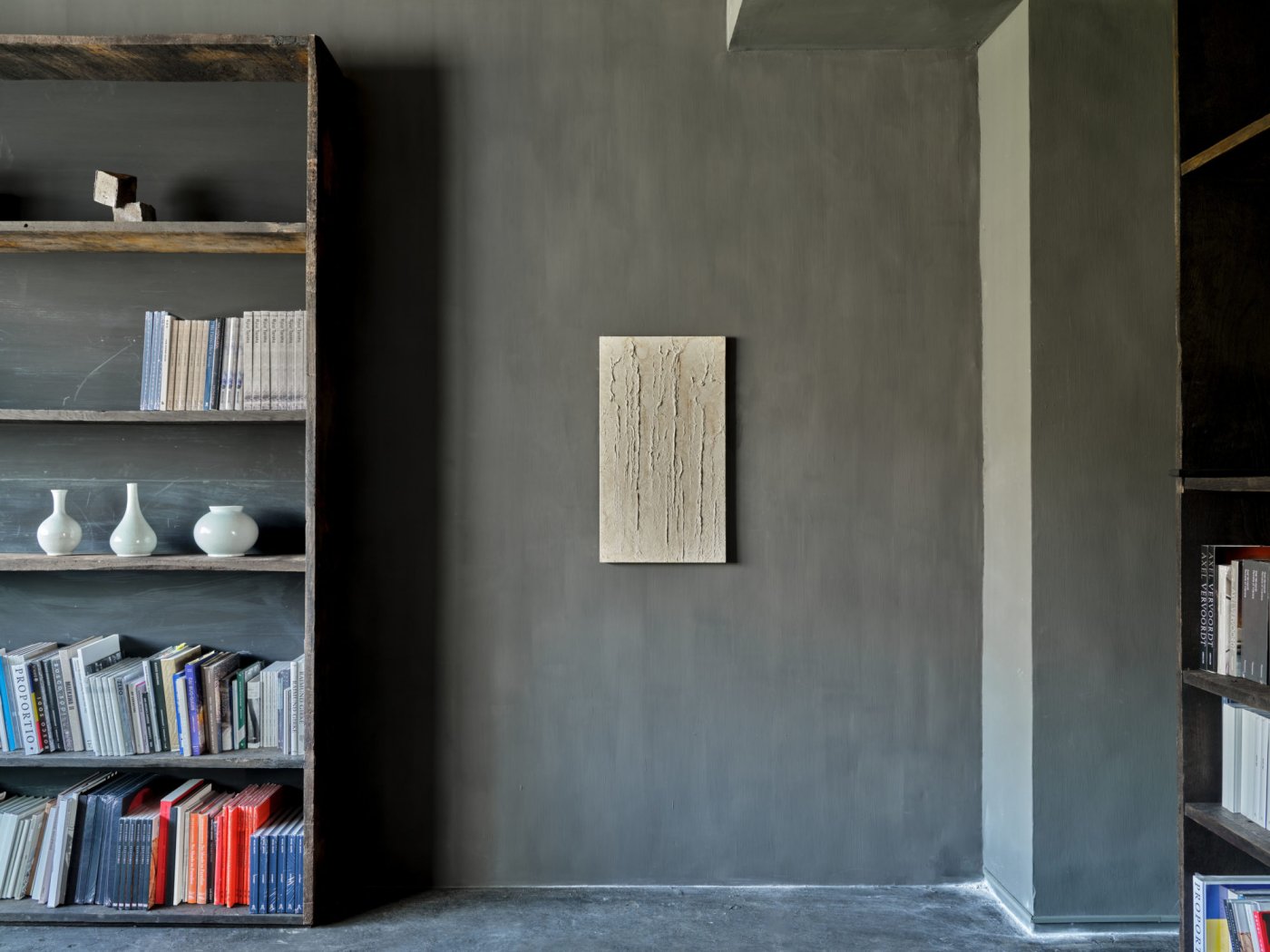 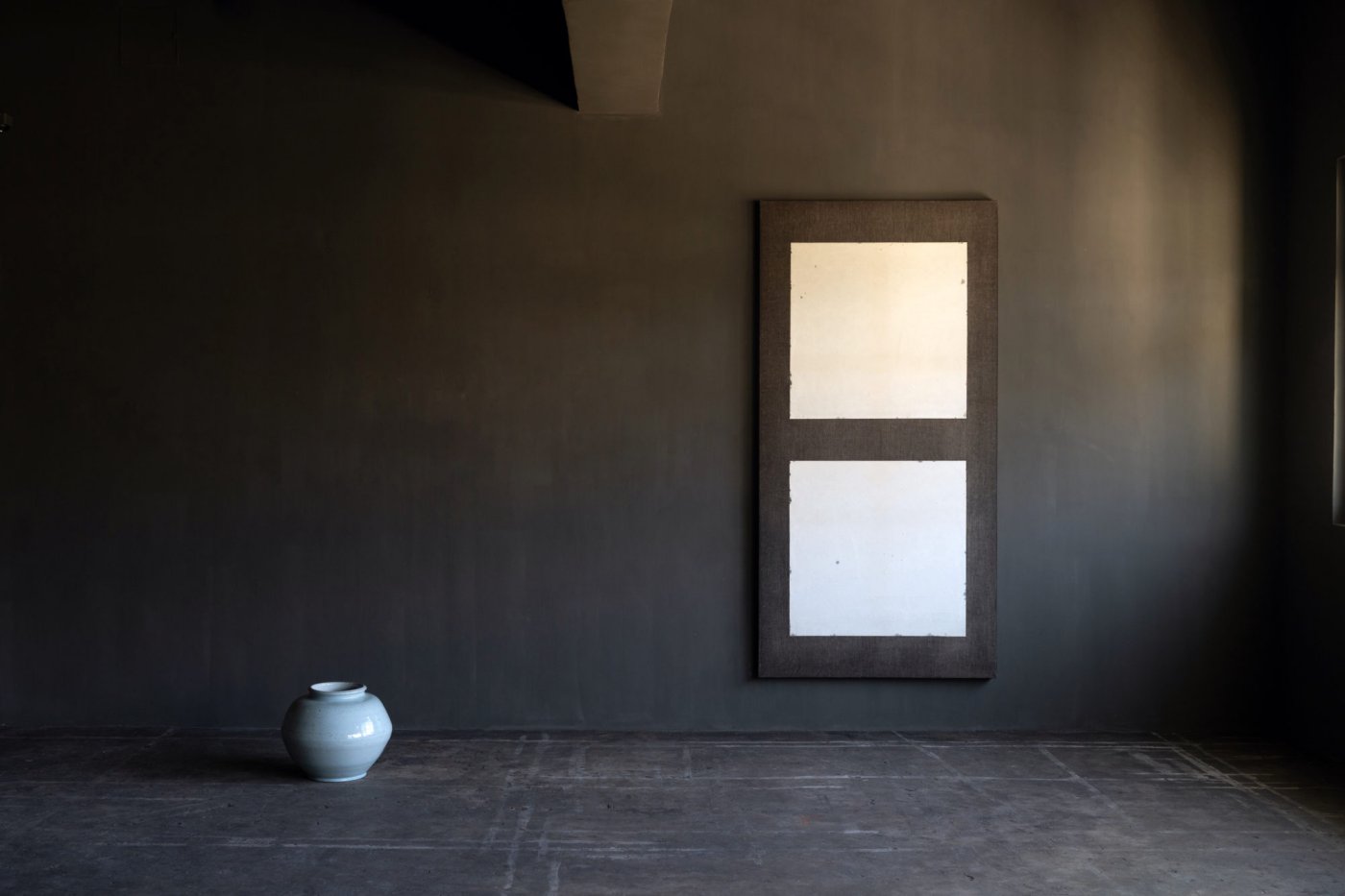 First presented at the gallery’s Kanaal space in July last year, the travelling exhibition features works from the artist’s forty-year quest to master his technique with tak, a natural material that’s made from the inner bark of the mulberry—a native tree in Korea. Works from Chung’s three most important series, Return, Tak, and Meditation (in chronological order), are juxtaposed in the installation.

A significant confluence of historical events seem to contrast with Chung’s contemplative memories during the period these works were created: Korea’s turbulent history during the Japanese occupation at the time Chung was born; the grip of the antagonism caused by the Cold War afterward; until the foundation of South Korea in 1948; the subsequent Korean war; and eventually the processes associated with ‘modernisation’ and the search for a cultural identity.

The roots of this contemplation stretch to the artist’s childhood: the first thing Chung saw in the morning was the soft sunlight shining through the windows crafted with handmade tak paper, also called hanji. Hanji was used as a base for paintings and calligraphy, as well as architecture—as wallpaper and as panes for sliding doors and window. With the ability to control temperature, humidity, and light, hanji had a greater responsibility than mere protection. Rather, it’s like a membrane between the interior and the exterior of the dual world; the inner and the outer.

“Through the screen of tak paper, one can distinctively sense the wind, light and the flow of time outside his or her room, which allowed us to experience both feelings of being inside and outside. This is the realm of creation with no intention of creating,” Chung said.

It was this form of creation Chung sought in his practice, trying to process the tak in such a way that he put his breath, odour, and soul into the process, “thus becoming a part of the process itself, becoming one entity with the paper”. Chung talked about a conversation with the mulberry fibre, searching for the balance between the composition he had in mind and the spontaneous response of the material.

Inspired by Eastern spiritualism, Chung strived for a transcendental state of self-disappearance, arising from the idea of unification. According to Lewis Biggs in the 1992 Tate Liverpool exhibition, Working with Nature: “These are not the images but analogies, lyrical recreations of the experience of life, with all its formlessness, its decay and change. It is the paper, not the artist, speaking to us.”

Working with Nature focused on artists associated with Dansaekhwa, an art movement from the 1960s-70s whose name can be translated as “single-colour painting”. Although the artists exhibited together, commented on each other’s work, and sometimes even painted together, Dansaekhwa did not officialise itself, nor was a manifesto written as was done with other post-war avant-garde movements. Other prominent members of the movement included Park Seo-Bo (who works with hanji) and Yun Hyong-keun. As with Chung’s work, the works of these artists are the result of the physical interaction with matter.

Although “single-colour” should be understood as the purity and spirit of colour, based on the broad tradition of calligraphy, this exhibition shows that Chung’s works did not strictly consist of one colour, especially when we talk about his work from the early ’90s. Nor are his works strictly speaking paintings, as the tak was spread, battered, tapped, and kneaded, with his hands or with a wooden stick or threads. Chung reflected on his work as being “unpainted paintings”—in line with his goal to “depict a world without depiction”.

The 1960s and 1970s meant the questioning some of the centuries-old paradigms in art. Donald Judd—who was attached to an army unit building the airport for American forces at Seoul during the war—was captivated by the beauty of traditional Korean architecture. Judd, who is now remembered as the leading figure of American minimalism, worked with his heavily reduced forms away from the (arbitrary?) dividing line and determination between painting and sculpture—something he also addressed theoretically. Reducing the language of forms was nothing new in the post-war art worlds—think of Mark Rothko or other abstract expressionists.

In Korea, artists were fully aware of what was going on in New York, Paris, and Tokyo, and vice versa. Visual material circulated widely. For example, the Korean magazine A.G. reproduced images of Judd already in 1969. Artists travelled to and interacted at international exhibitions such as Documenta VI, or as in Chung’s case, the second Paris Biennale in 1961. This particular visit occurred during a period in which Chung practised with oils in the then-predominant Art Informel tradition.

Sharing the same artistic principles and structures even brought Donald Judd and Yun Hyong-keun (who saw Rothko’s work in the 1970s) together with a 1994 exhibition, which would be Judd’s final before his passing.

Yet, it would be too easy to speak of a clear influence of Western – occidental – art movements on those in the East, as claimed many times in the past. Much has been written about the differences between Dansaekhwa and the counterparts in the West, where the reinterpretation of nature as a reflection of the human mind is being regarded as the primary criterion.

This urge to blend with nature, as Chung’s reminiscences show, stems from the tradition of Eastern ideologies. While the abstract expressionist relied on the visual, physical experience as the result of the individual, focussing on formal elements, the artist associated with Dansaekhwa had no intention of making “images.”

Also, it should not be forgotten that several Western artists, including Paul Klee, Hans Hartung Jasper Johns, Ad Reinhardt, and of course Yves Klein, embraced these complex traditions of Buddhism and Confucianism, not putting humanity at the head of the symbolic hierarchy and commanding a respect with nature, opposed to the idea of dualism.

Chung, amongst those who were the first generation to receive formal education himself, rejected the Korean arts academy system that divided Eastern painting from Western painting – and ink from oil, a distinction that was challenged in his art practice. Other voices were heard to eliminate the geographic hierarchy of art criticism. In 1970, Ha Chong-Hyun, another artist associated with Dansaekhwa, described the worldwide phenomenon of the emerging avant-garde art movements in 1970 as simultaneity.

As curators Sam Bardaouil and Till Fellrath conclude in their 2016 essay: “Dansaekhwa is a great example of the negotiation of modernity beyond the confines of a western-centric history of art.”

“I try in my art to establish harmony between oriental ideas and matter, just as a person who is practicing religion would experience the world of Zen,” Chung said. “I believe that oriental spiritualism and occidental materialism are harmonized on the crossroads of my lonely journey.”