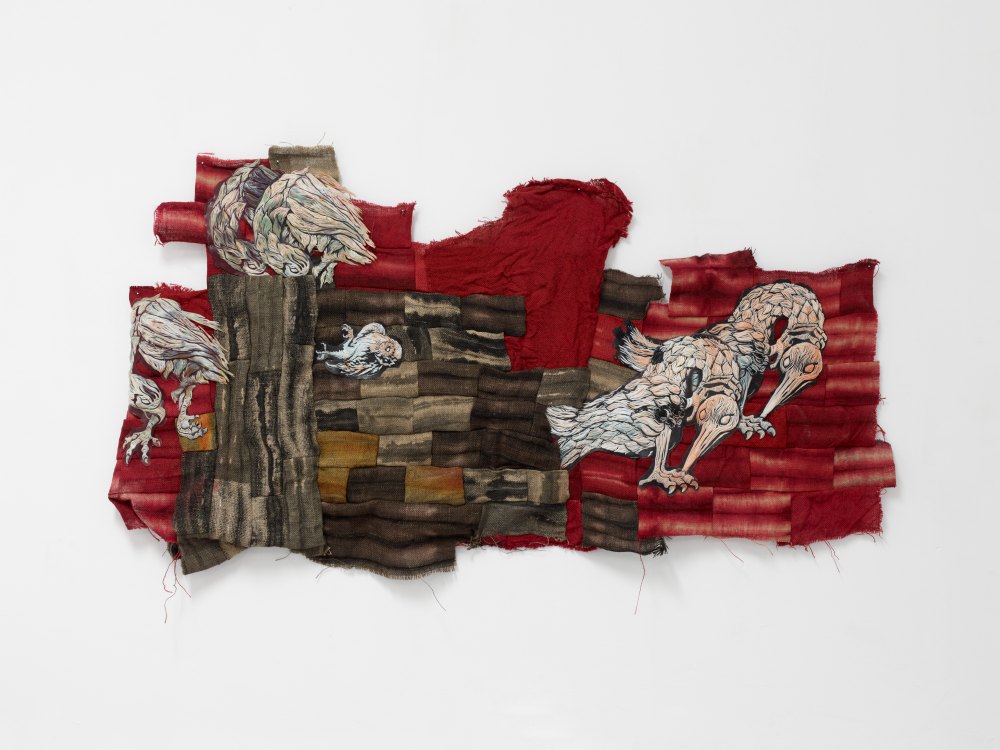 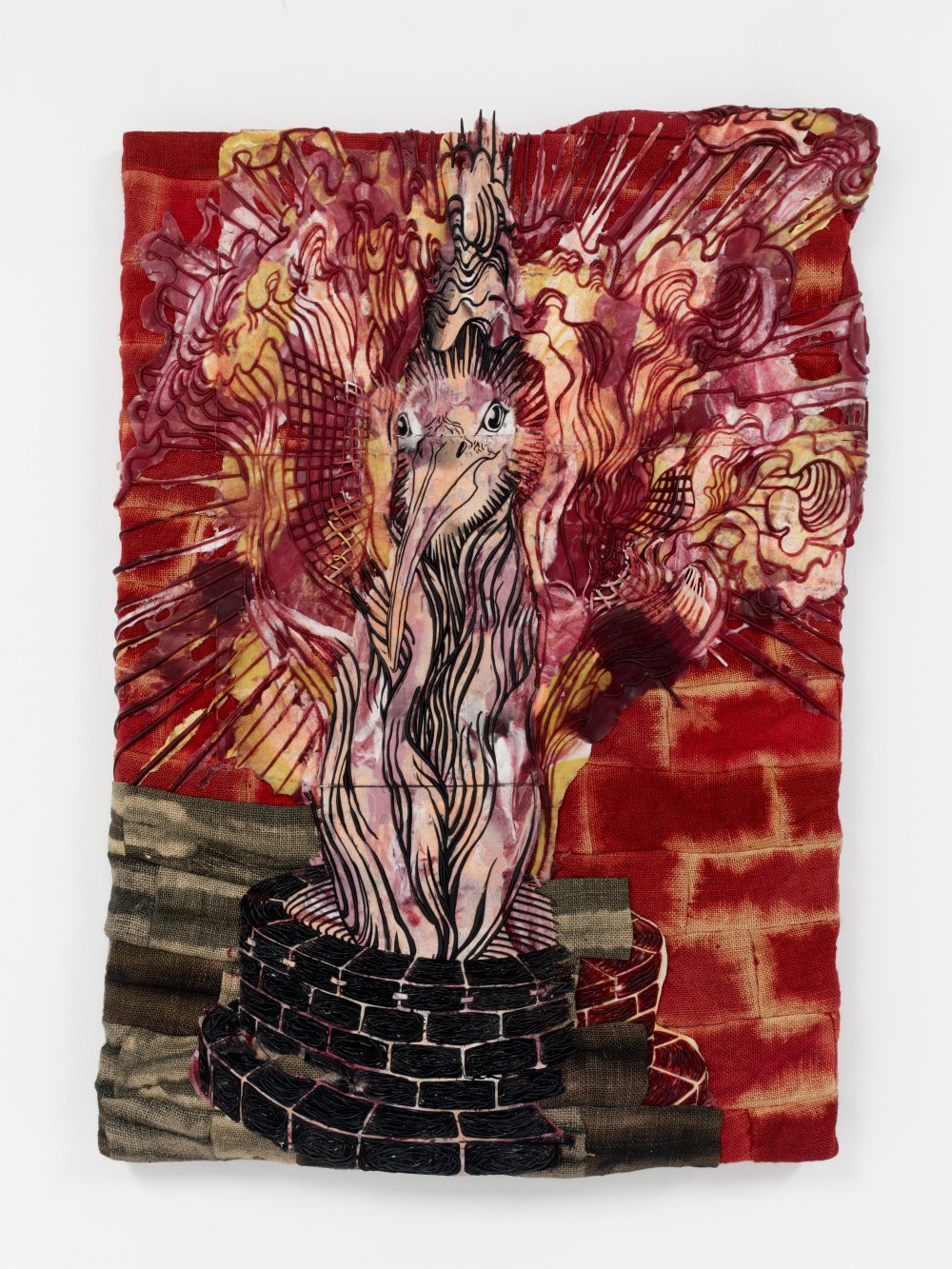 Christiane Blattmann
Under the Spell of Law, 2022 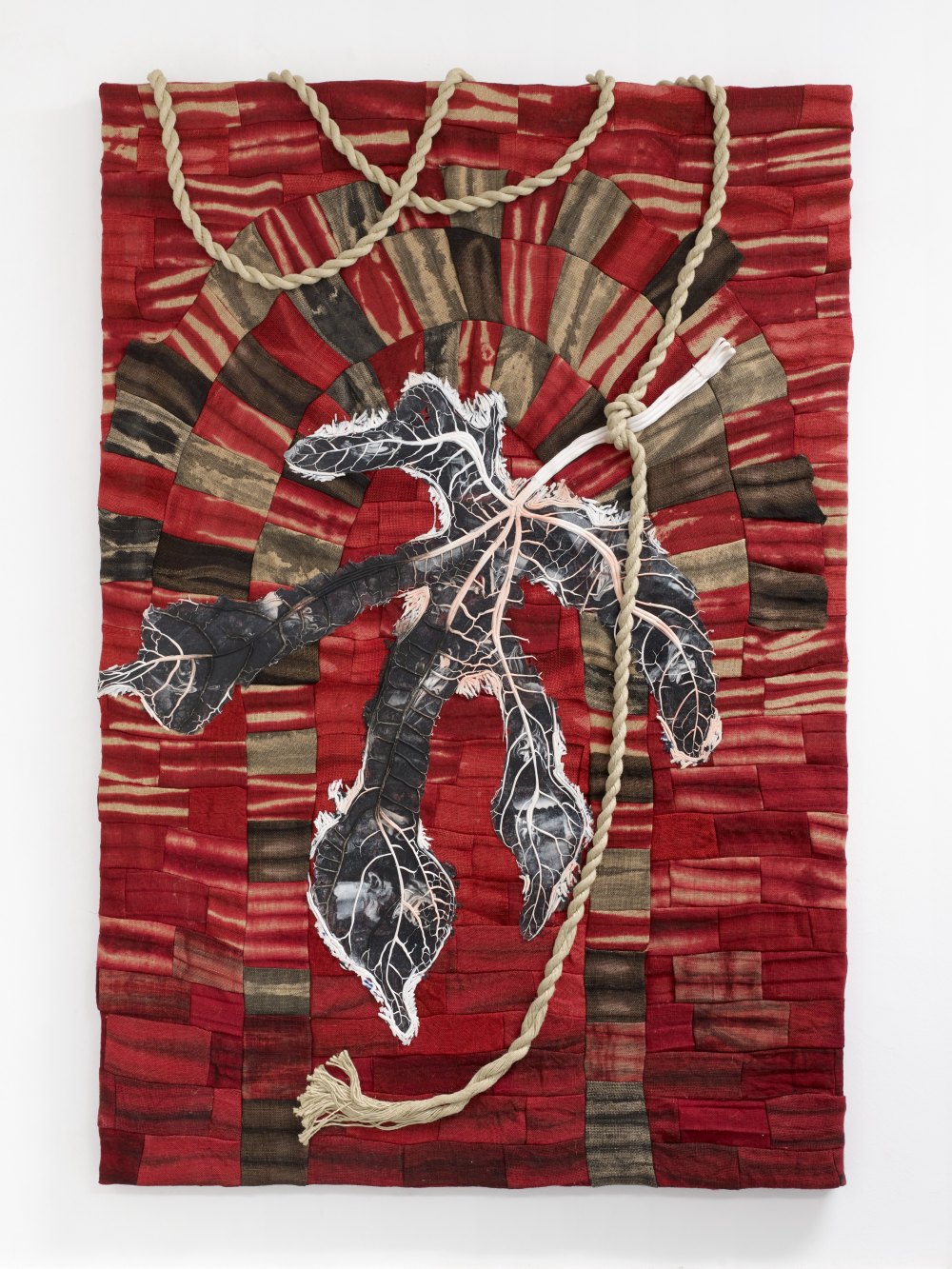 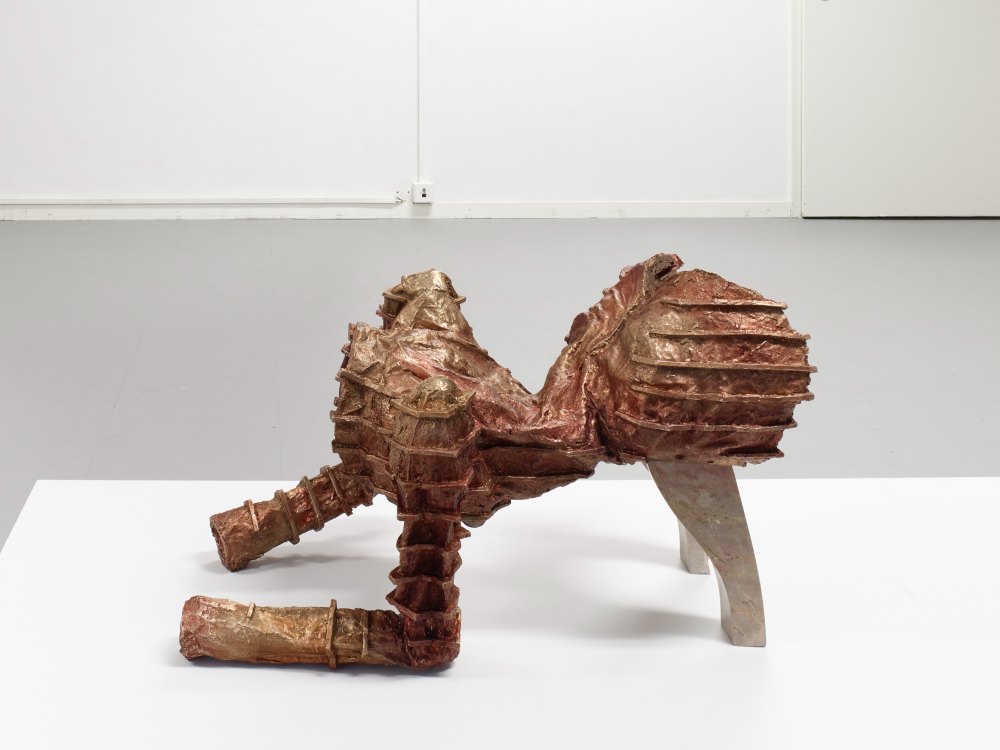 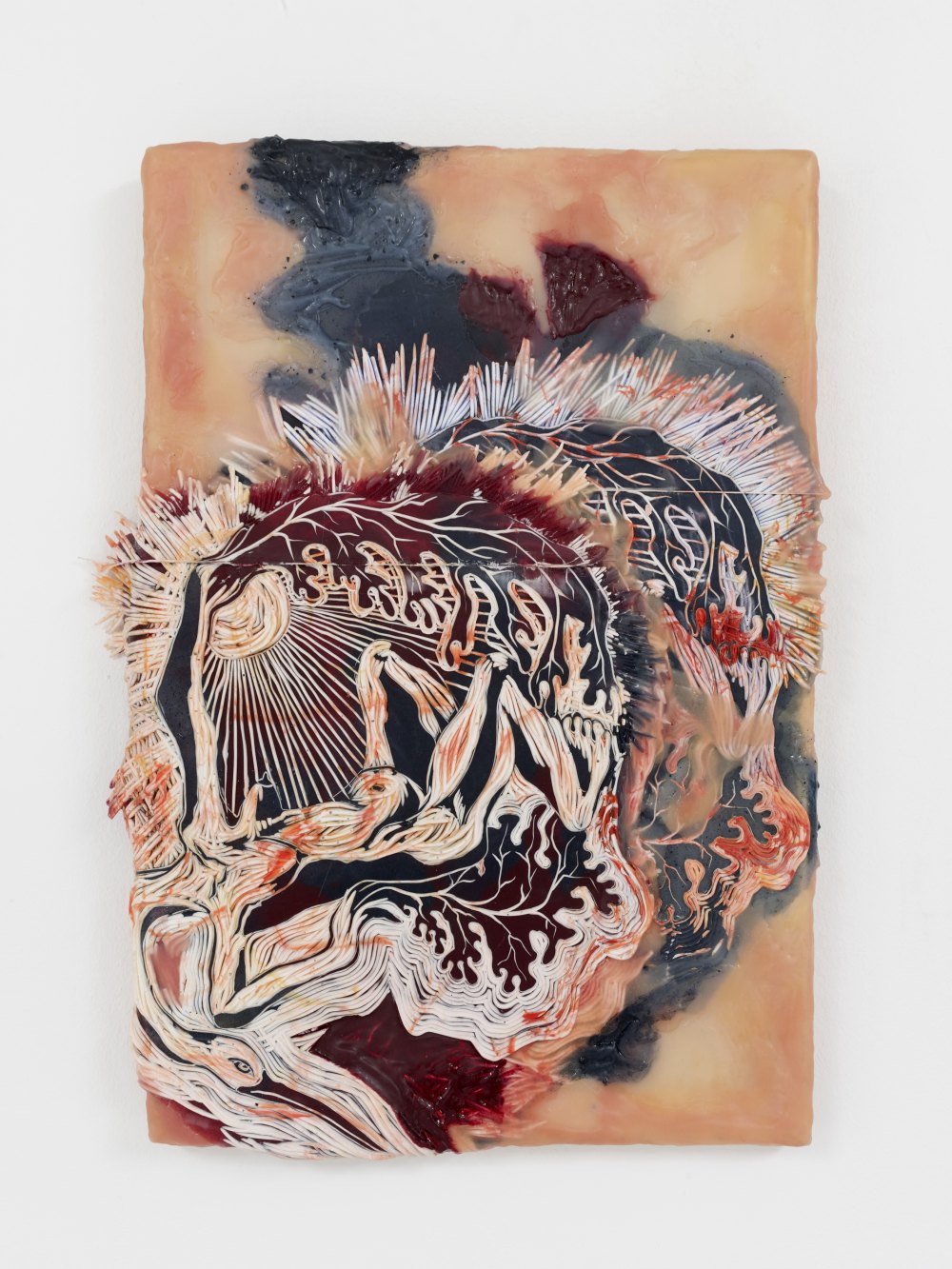 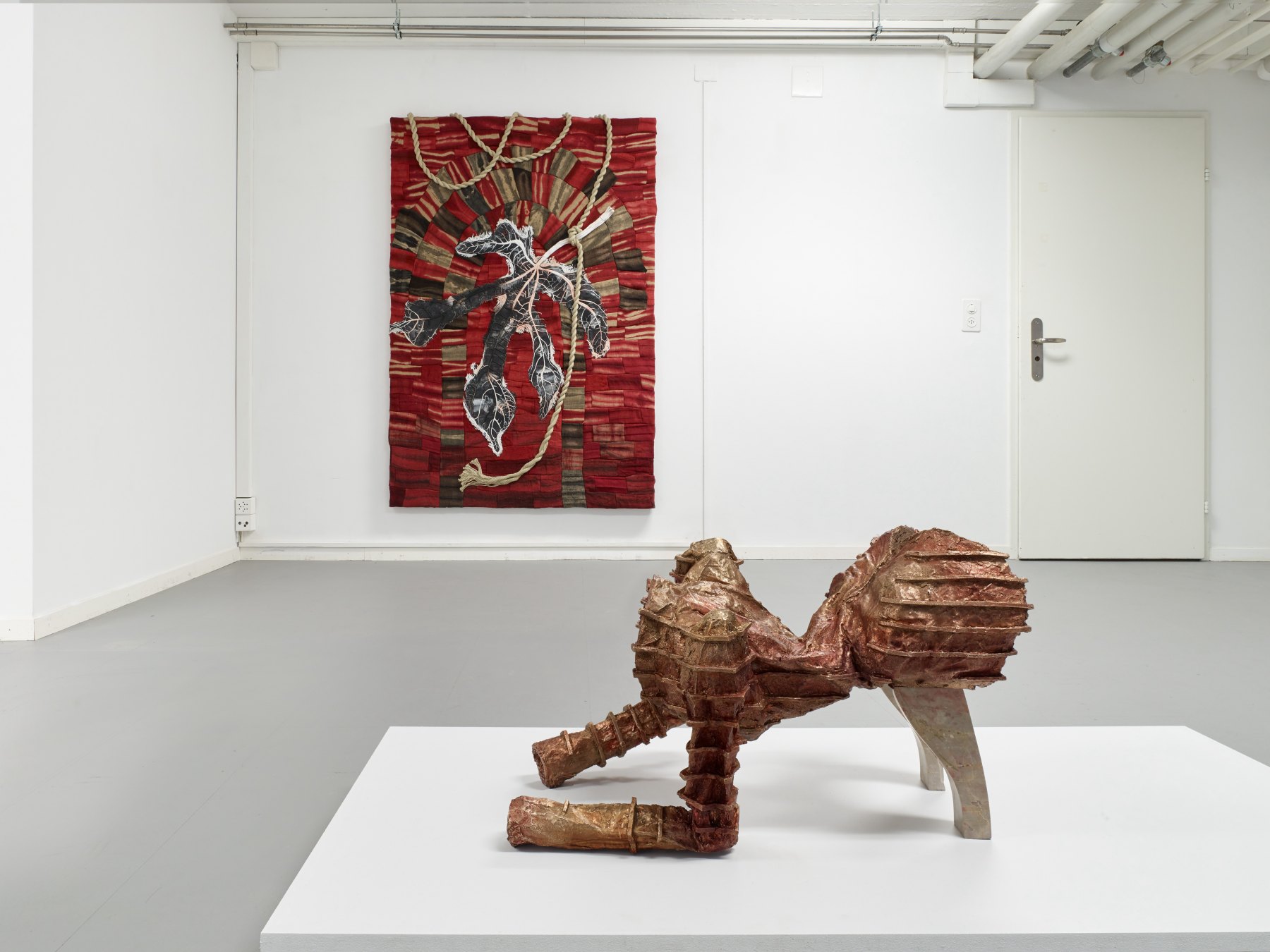 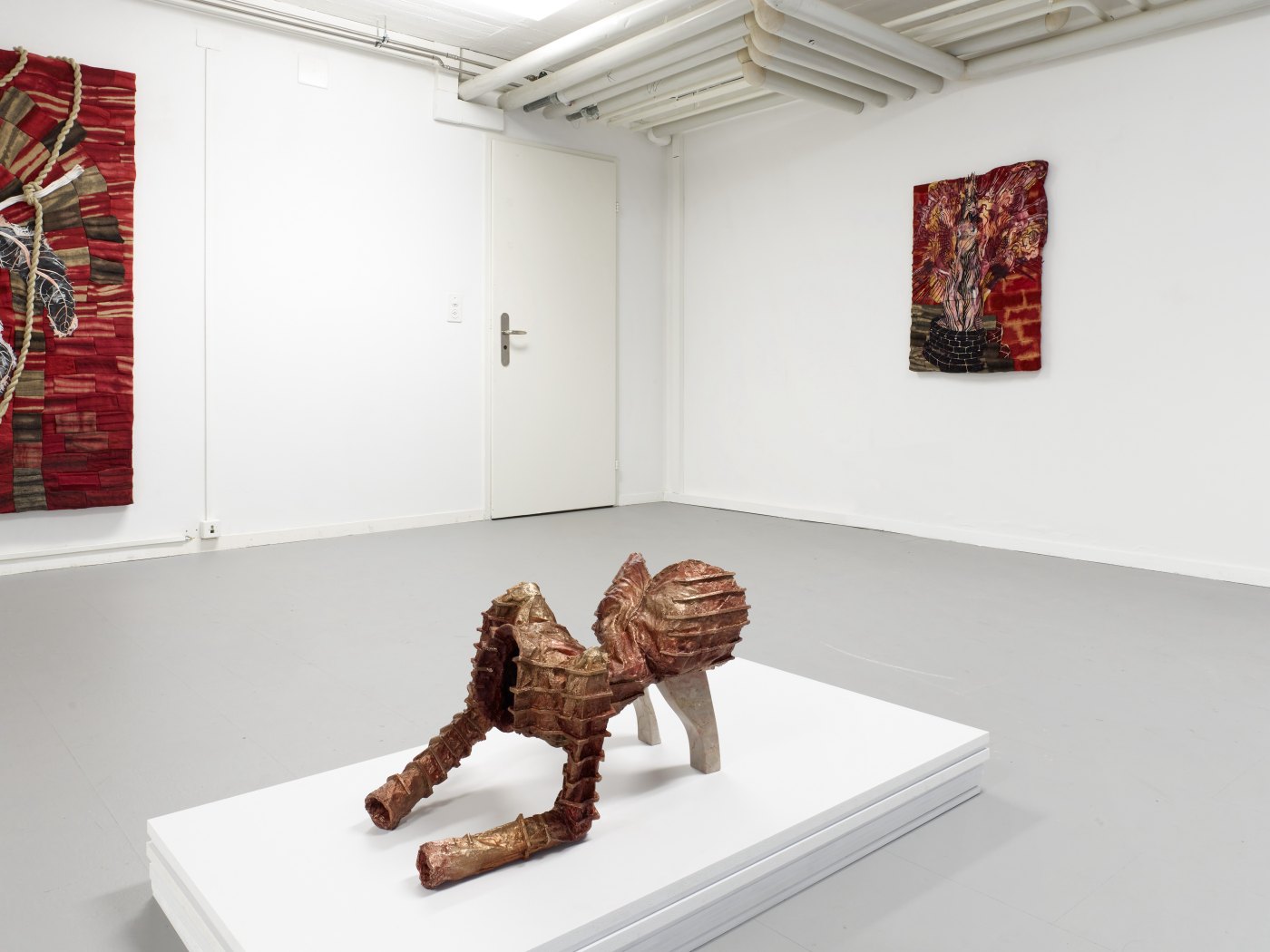 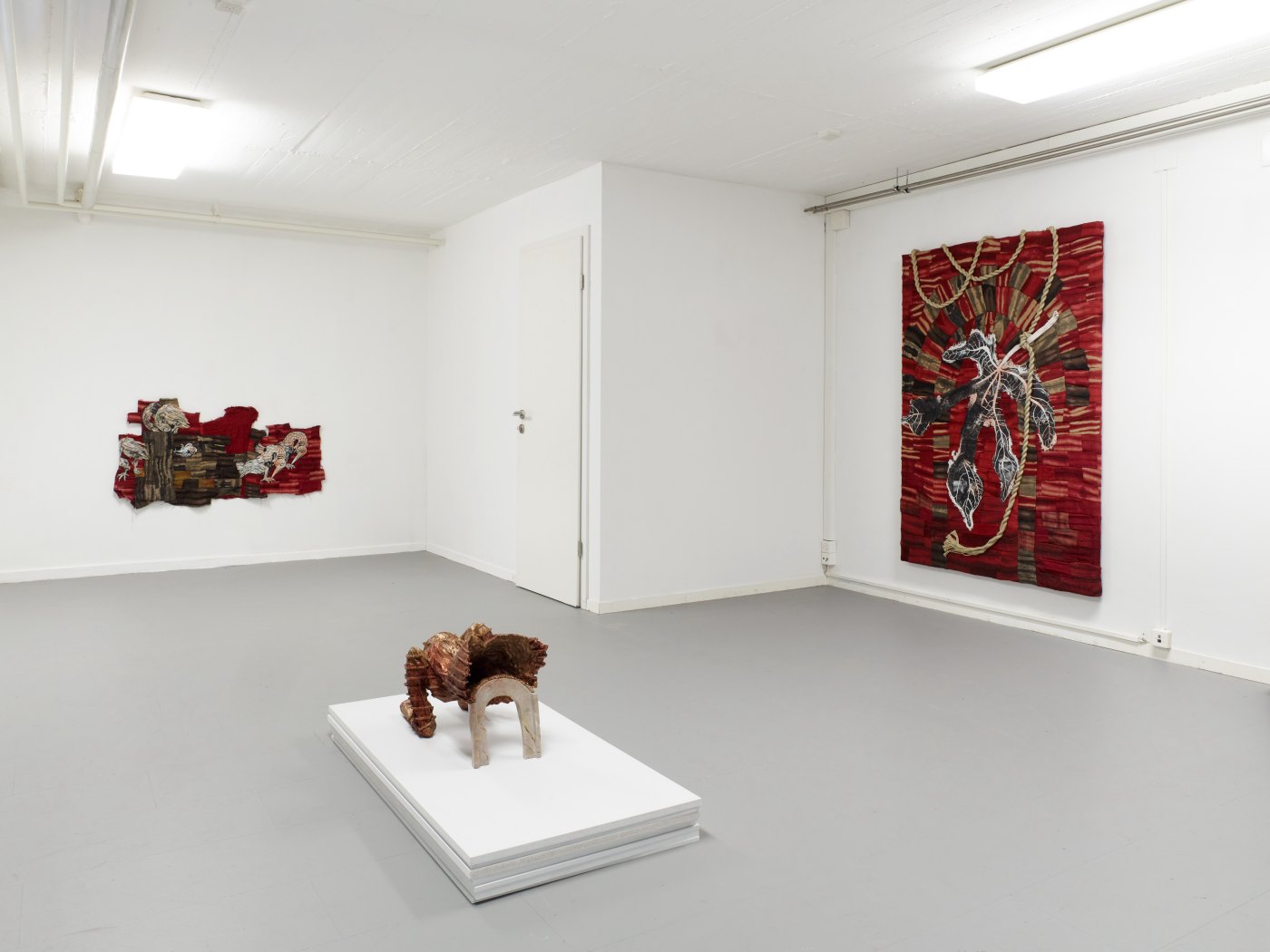 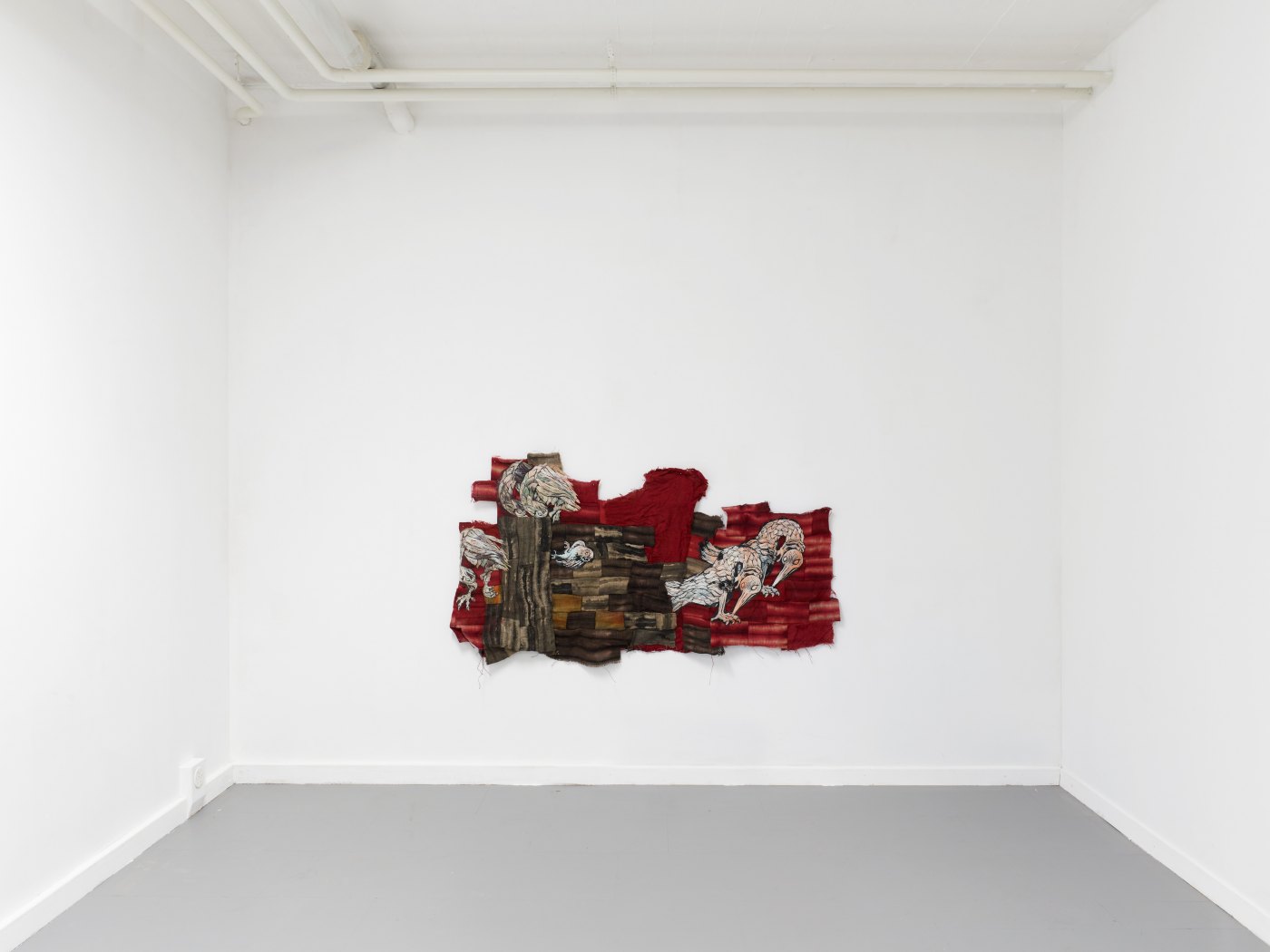 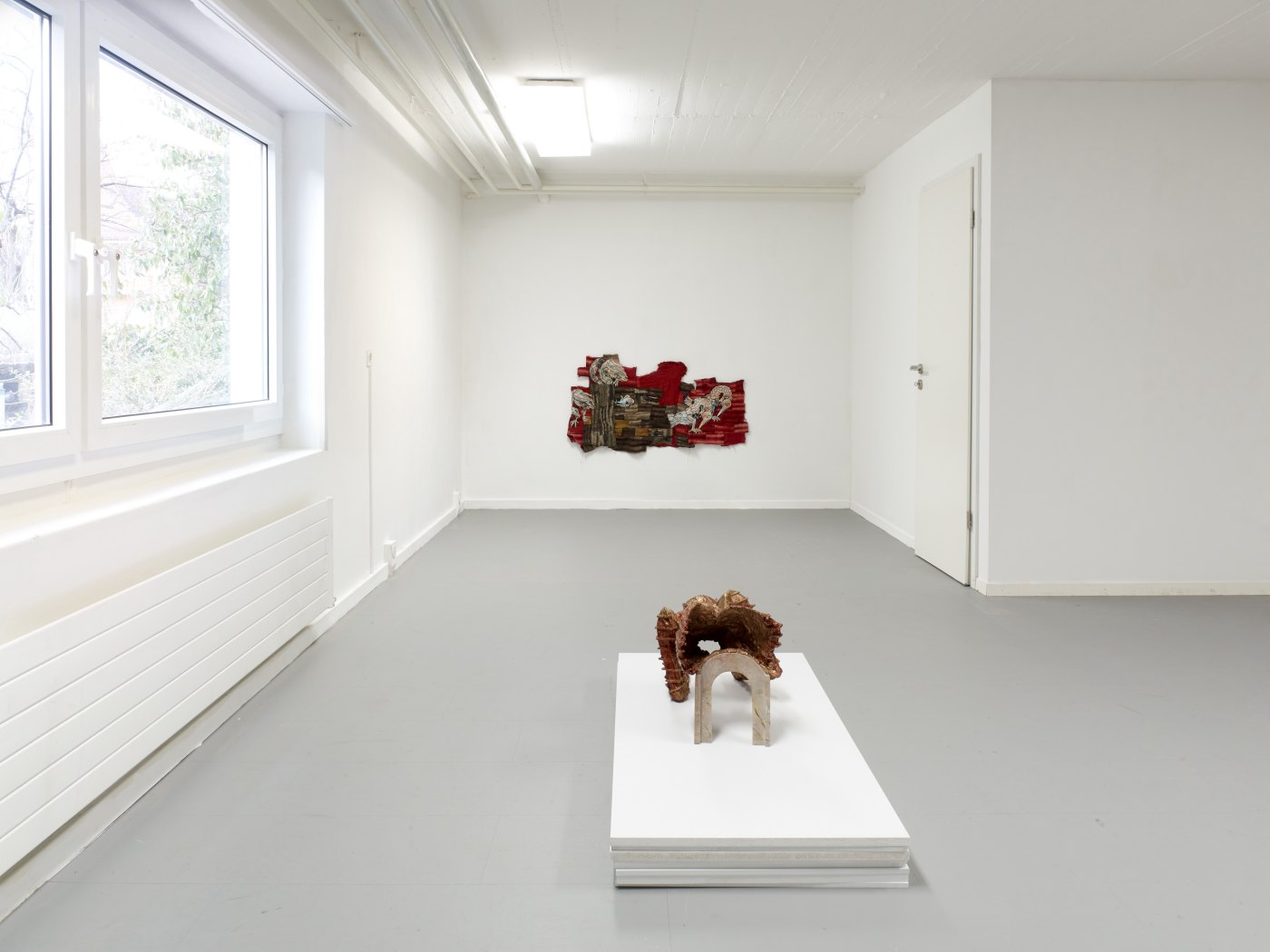 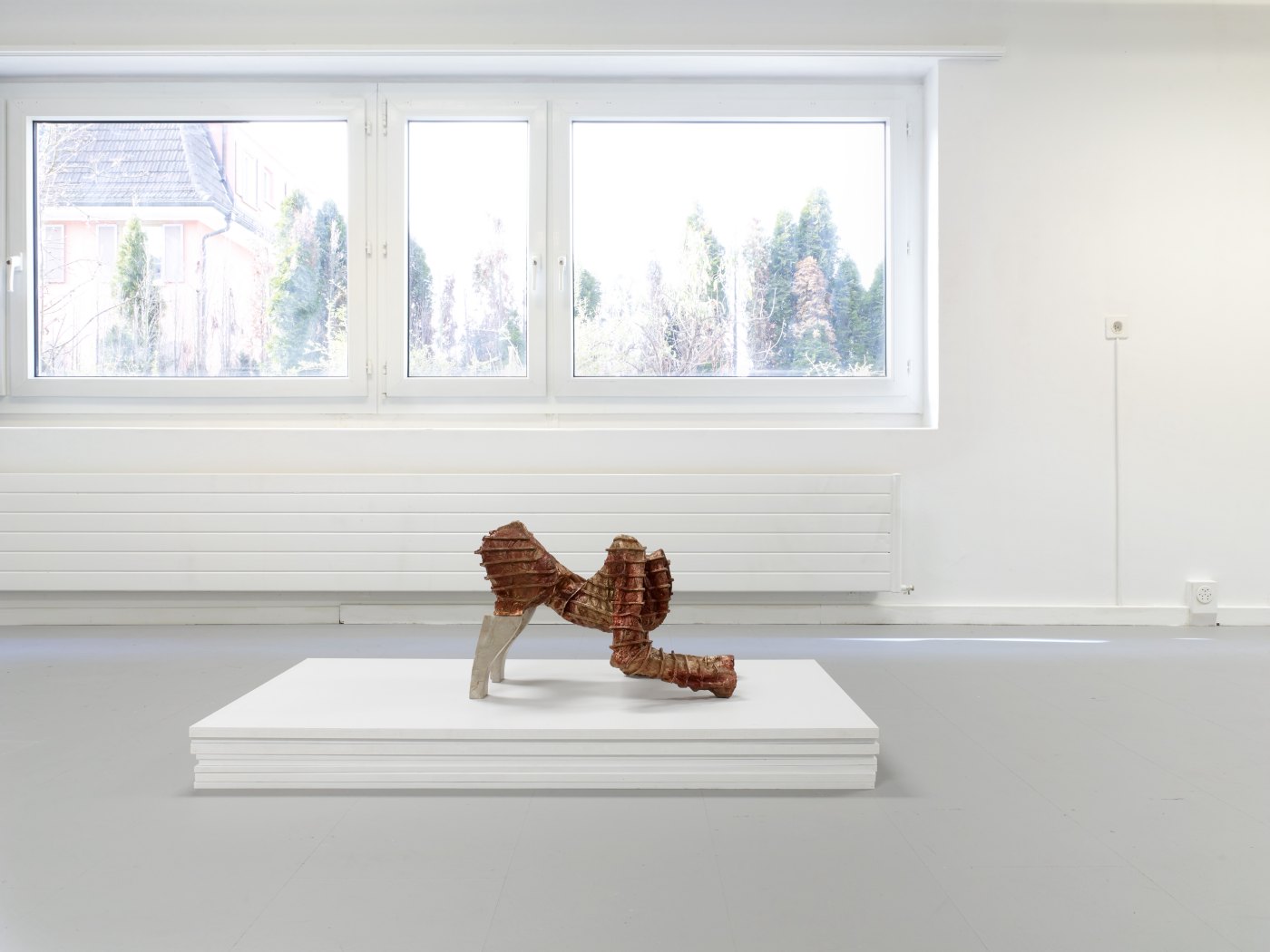 How to behave, confronted with assertion of authority expressed through symbolic vagueness? In Christiane Blattmann’s The Law, the works on the wall have been hung low, a feeling of pressure highlighted by the posture of the central figure. The exhibition space, that could well be the reception room of the building, opens up with an atmosphere of slight unease.
In the works presented on the walls, jute and silicon merge to form an amalgamated substance, penetrating each other and blurring respective boundaries. Their materiality is appealing, but the presentation maintains a distance that frustrates a direct sensory input. Like flesh, they trigger the itch to explore them by the touch of fingers, a caress that is the basis of fascination. As exposed flesh, the representation builds up from the inside: the fabric is not the support of the image but a constitutive element of it. Those inner working dynamics set up the works as open situations, sites of negotiation for matters of spatial agency. Materially, how do the bas-reliefs penetrate the room if they are internal discussions? And metaphorically, what space do they occupy, as knitted walls “dressed” on real ones? They oscillate between illusionism and flatness, as much literally as symbolically.
The sphinx-like figure in the room keeps its legibility in tension, performing what may be an act of reverence as much as a rite of an assertion of power. The bird figures that populate one of the wall works share an ambiguous posture, interweaved in their brick backdrops, and similarly call for an act of deciphering: are they guards of a protected treasure, or scavengers waiting to feast? Those creatures act with a troubling dose of defiance; ambivalent social signs. The tales they tell belong to the genre of chimeric chivalry, with commitment and moral codes. The two gates in the exhibition also trigger uncertainty: one in marble, as much support for the body it carries as its excrescence, and the other appearing in the bigger jute work, interlocked with the wall. Situated at symbolic peripheries, the gate doesn’t seem to do what it is supposed to do, but performs another act, probing the limits of what it could be the entry to.
But all those stories should not divert from the fact that you, the viewer, still stand in front of a wall. It has an imposing effect, maintaining you at respectable distance. How will you act? In English as in German, you stand in front of the law, an eye to eye duel that builds expectancy for a judgment to come. You may think of Kafka, but the play on materials in the exhibition as well as the gazing may lead you rather to think of a queue of a trendy night club, waiting for the bouncer’s irrevocable decision to let you go in. If judgment is favourable, destiny is manifest: the night is yours, it always has been.