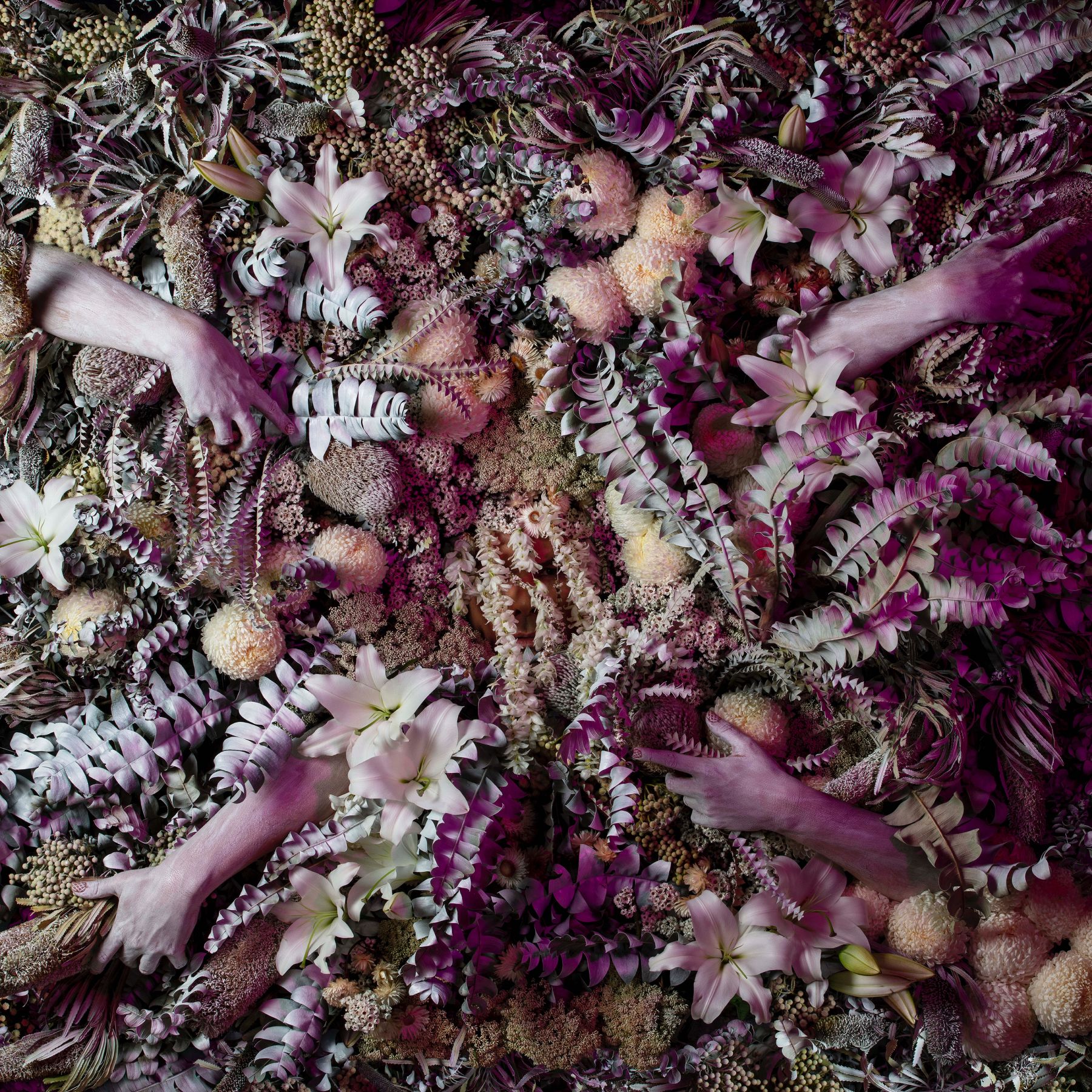 Formally trained as a sculptor, Thompson’s multidisciplinary practice engages mediums such as photography, video, sculpture, performance and sound. His works explore constructs and ideas of identity, sexuality, gender, cultural hybridity, memory and history, often highlighting the relationships between these concepts and the environment. He uses his own identity and multicultural background to interrogate and re-appropriate established, predominantly white systems of reference, as a way of imagining new personal positions. Throughout his work, he creates and inhabits a range of personae through performance and what he calls ‘anti-portraits’, incorporating handcrafted costumes and carefully orchestrated poses and backdrops.

I think of them more as conceptual anti-portraits than self-portraits. My physical head and shoulders simply provide a template, something that I’m just constantly building on top of. I’m always looking for materials: what I’m reading or listening to, where I am. It’s very much connected to that kind of research but it’s also connected to whatever is in the ether at that moment.
Christian Thompson

Being Human Human Being presents work from the series’ King Billy (2010) and Flower Walls (2018-ongoing), both of which reflect on indigenous and diverse representation.

The King Billy series highlights Thompson’s interest in fusing different elements to create a distinct, often unconventional visual language of his own. Referencing traditional portraiture, fashion photography, advertising, music promos and mug shots, the images show an anonymised figure positioned against a black backdrop. Wearing a brightly coloured hoodie created out of customised fabrics patterned with indigenous motifs and adorned with symbols of power and authority (crown, pearls, medals etc) the subject commands a striking presence yet is entirely faceless.

While I’m interested in portraiture – I don’t consider my work as portraiture because that suggests that I’m trying to portray myself, my own visage, my own image. I employ images, icons, materials, metaphors to capture and idea and moment in time. There are many different things at play; taking a picture of myself is really the last thing that’s on my mind.
– Christian Thompson

In Flower Walls (2018-ongoing) the artist is literally submerged in Australian native plants and flowers, overlapping and interwoven to create dense, vibrant compositions of colour and texture. Glimpsed amongst the foliage are parts of Thompson’s face and hands, which seem to both simultaneously appear and disappear within the arrangement. The presentation for SPQ features the latest work in the Flower Wall series, Being Human Human Being (2022) – which provides the overall title. Commissioned by Photo Australia, this presentation marks its international premiere.

Flowers also play an important role in two more works, Polari (2014) and Pagan Sun (2013), which will be reproduced on 4 x 6m banners. In these works, Thompson plays with different modes of representation and sexuality by painting his skin and adorning himself with natural accessories such as flowers and feathers.

The presentation also includes audio visual work that interrogates the implications of England’s empirical quest on the former colonies of the British Empire and explicitly focuses on the threat to, or loss of Indigenous languages. In a hauntingly beautiful new soundscape, Burdi Burdi (Fire Fire) Quad mix (2022), Thompson sings in his father’s native language, Bidjara, now classified as extinct, against a melodic backdrop of instrument, breath and speech. The significance of a vernacular tongue is also explored in the video work, Dead tongue (2015), and in a second video projection, Amsterdam RMX (2020), Thompson presents an experience of what the Bidjura anguage feels and sounds like.

Shot in Thompson’s Melbourne studio, the constructed set lacks context aside from its European namesake. Thompson says it is set in a memory. In 2006, while living in Amsterdam, he ran into someone on a walk amidst a snowstorm. He stands in front of a black backdrop cloaked in a warm-looking hooded coat, singing to us with specs of snow rapidly falling in front of him.

Christian Thompson AO: Being Human Human Being’ is organised by The Photographers’ Gallery and Photo Australia / PHOTO 2022 International Festival of Photography, and is supported by the Australian Government as part of the UK/Australia Season 2021-22.