Marian Goodman Gallery presents Départ – Arrivée, a solo presentation by Christian Boltanski. The exhibition features recent sculptural works and video installations that have never been presented before in the U.S., as well as a selection of historical pieces from the 1980s. 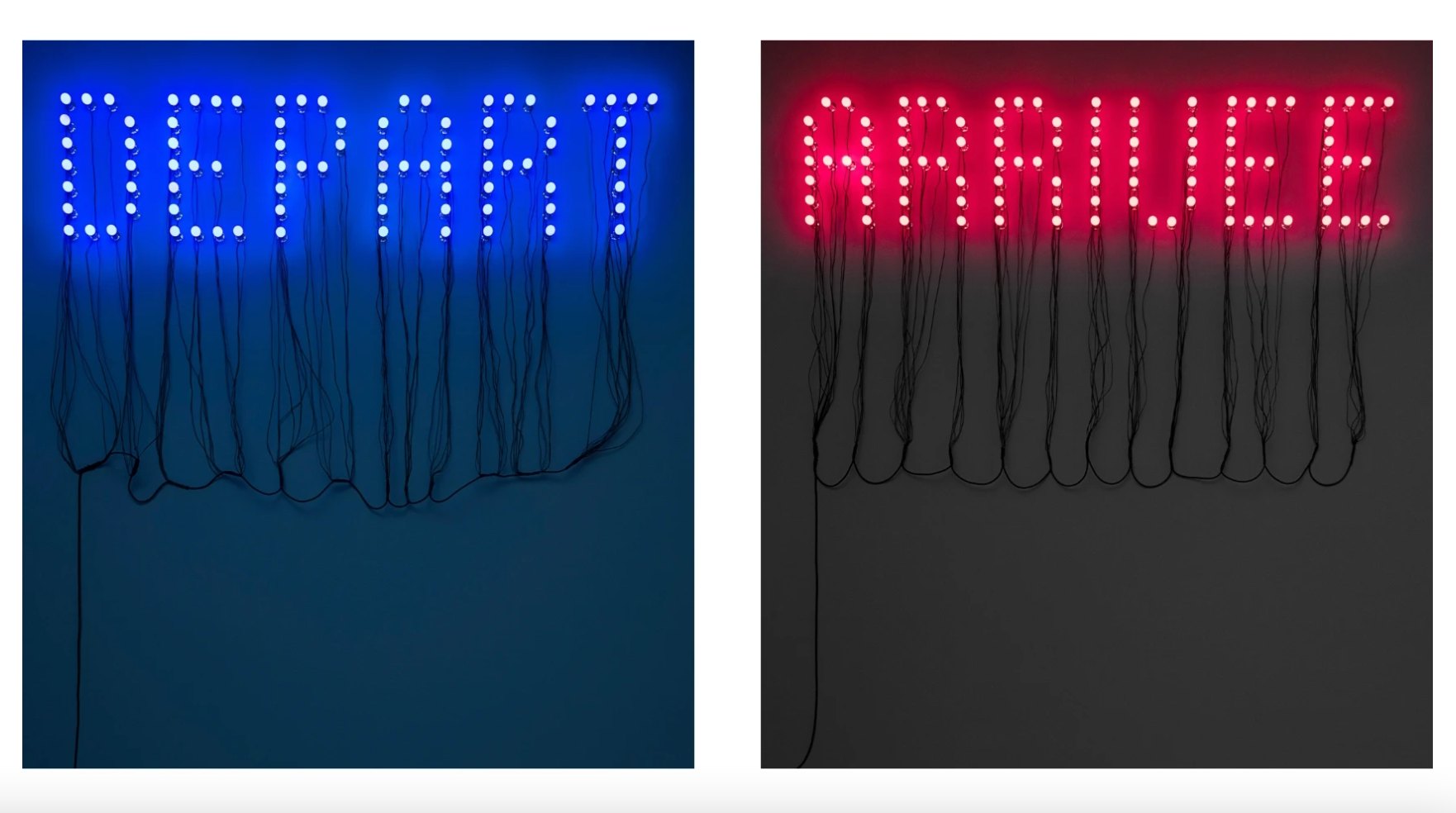 Mostly conceived by Boltanski himself before his passing in July 2021, the show is an homage to his life and work, offering a lens into the metaphysical preoccupations that drove his artistic practice for over fifty years. The exhibition reflects Boltanski’s ability to suggest the passage of time and the precariousness of our existence as well as his powerful skill as a universal storyteller. Bringing together works from two different time periods, the exhibition demonstrates how the artist, throughout the years, had become more and more interested in creating parabolas beyond the materiality of his works.

In the North Gallery, the word Départ in red lightbulbs greets the visitor and marks the debut of a journey through the exhibition towards the Arrivée in blue located in the South Gallery. Presented for the first time at Galerie Marian Goodman, Paris in 2015, the diptych Départ – Arrivée (2015), echoes the voyage of life and has since become an iconic piece, included in his important retrospectives in Korea, France, Japan, and Israel.

“(…) Stories have greater power than objects,” explained Boltanski in 2019. “There have been several periods in my life; one where works existed, another where they had been destroyed but re-created, and now, it’s no longer about seeing the works but knowing they exist. This is the story that will have been passed on,” he continued in an interview published in his retrospective catalogue from Centre Pompidou in Paris.

From the early 2000s to 2021, Boltanski increasingly turned to video, creating more than a dozen video installations including the series Animitas, initiated in 2014 in the Atacama Desert in Chile and “re-played” in other parts of the world (Canada, Japan, and Israel.) At each site, a sculptural work made up of several hundreds of small Japanese bells mapped the exact configuration of the sky on September 6, 1944, Boltanski’s date of birth. Stirred by the wind, the bells resound like soft chimes as a tribute to drifting souls. Meant to be ephemeral, at each of Boltanski’s four site-specific installations, the work is solely comprised of a long sequence shot from sunrise to sunset, enabling the artist to tell the story of its impermanent existence. For Boltanski, like the second-hand clothes or the found photographs used in his past works, “the films will serve as a reminder when nothing else remains.”

In the North Gallery, Animitas (Mères Mortes) (2017) momentarily brings us to the shores of the Dead Sea in Israel. The installation combines a video projection and a bed of gravelly sand to convey the continuation of the quiet and desert landscape, inviting visitors to enter a meditative state.

In the adjacent viewing room, Crépuscule (2015), composed of 99 light bulbs, is viewable from its threshold. The floor piece functions as a countdown for the days of the show, fading away at the rhythm of two light bulbs each day. The room, bright and dazzling on the first day of the show, gradually becomes dark until the complete extinction of light.

In the South Gallery, the immersive video installation Subliminal (2020), is one of the last artworks created by the artist. The installation spreads over four large projections on which “cliché videos of a fabricated vision of happiness hide subliminal images of the horrors that took place in the century I was born into and that unfolded in parallel to part of my life,” explained the artist.

The blue letters of Arrivée indicate a new beginning as the exhibition continues onto the third floor with a selection of seminal works from the 1980s, including Réserve La Fête de Pourim (1987), Autel Chases (1987), Lycée Chases (1987) and three works from the Monument series. The mid-1980s was a turning point in Boltanski’s in which he developed the themes for which he is best known: the evocation of memory and loss, life and death. The exhibition space becomes a theater in which visitors are placed in direct state of emotion.

The aesthetics of this earlier decade of work is characterized by the materials employed by Boltanski (rusty biscuit tin boxes, black and white photographs paired with lightbulbs or small black lamps) as well as by atmosphere of darkness and shadows. Without referring to any specific religion, the works are reminiscent of altars and funerary monuments. The photographic portraits of children or teenagers are usually taken from group pictures such as Boltanski’s own school photo from 1951. Both Autel Chases and Lycée Chases date back from 1987 and share a common photographic source – a found group photograph of the Jewish Chases High School in Vienna from 1931– but differ in their forms.

Christian Boltanski (1944 – 2021) was born in Paris during World War II to a Jewish father and a Catholic mother. He spent his childhood hearing stories of the Holocaust, which deeply influenced him. A self-taught artist, he began modeling clay and painting before developing his more conceptual work in the late 1960s. Since his first solo exhibition in Paris in 1968, his oeuvre has been widely shown internationally. In 1988-1989, Christian Boltanski: Lessons of Darkness was his first in-depth exhibition in the U.S., co-organized by MOCA, the Museum of Contemporary Art, Chicago; and The New Museum of Contemporary Art, New York, and presented at the Vancouver Art Gallery; the University Art Museum, Berkeley; and The Power Plant, Toronto. In 2010, his monumental project No Man’s Land was presented and reenacted in three locations, Grand Palais in Paris, Hangar Bicocca in Milan, and Park Avenue Armory in New York. In 2011 he represented France at the 54th Venice Biennale.

Boltanski was honored with several awards over his lifetime, including the Praemium Imperiale Award (2006) and the Kaiser Ring Award (2001). He participated in Documenta (1977 and 1972) and numerous Venice Biennales (2015, 1995, 1993, 1980 and 1975). In October 2021, a few months after he passed away, three prestigious French institutions in Paris; the Palace of Versailles, the Musée du Louvre; the Centre Pompidou, with the Opéra Comique, organized a joint homage to the artist.