David Zwirner presents Dangerous Liaisons, an exhibition of new works by Chris Ofili, on view at the gallery’s 34 East 69th Street location, in New York. The show marks the artist’s fourth solo presentation with the gallery. 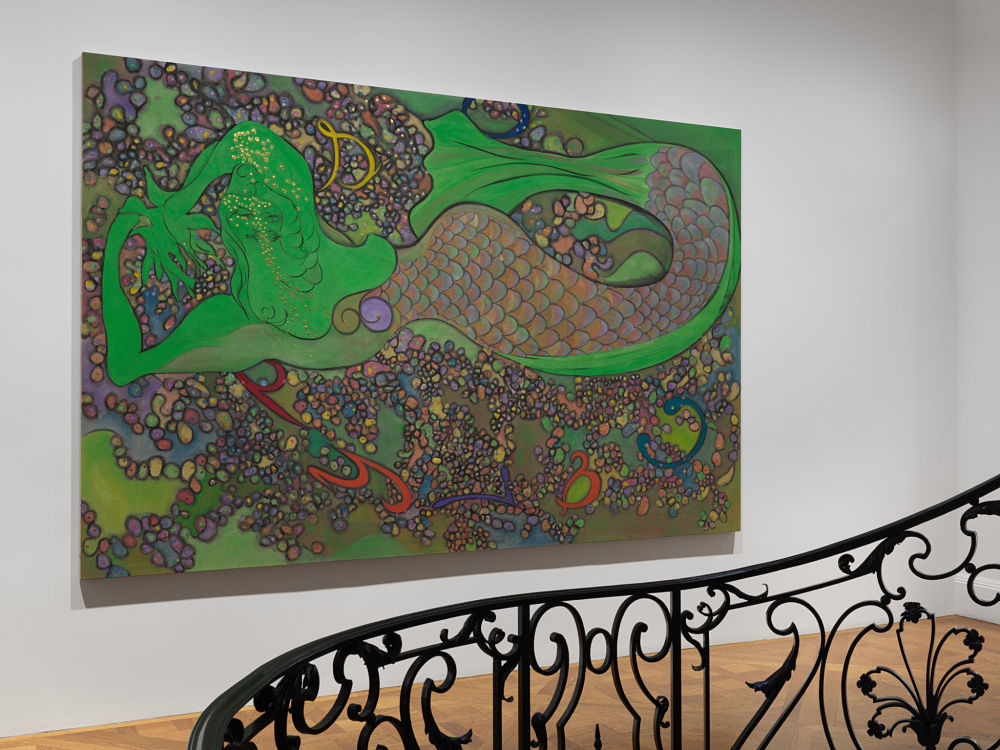 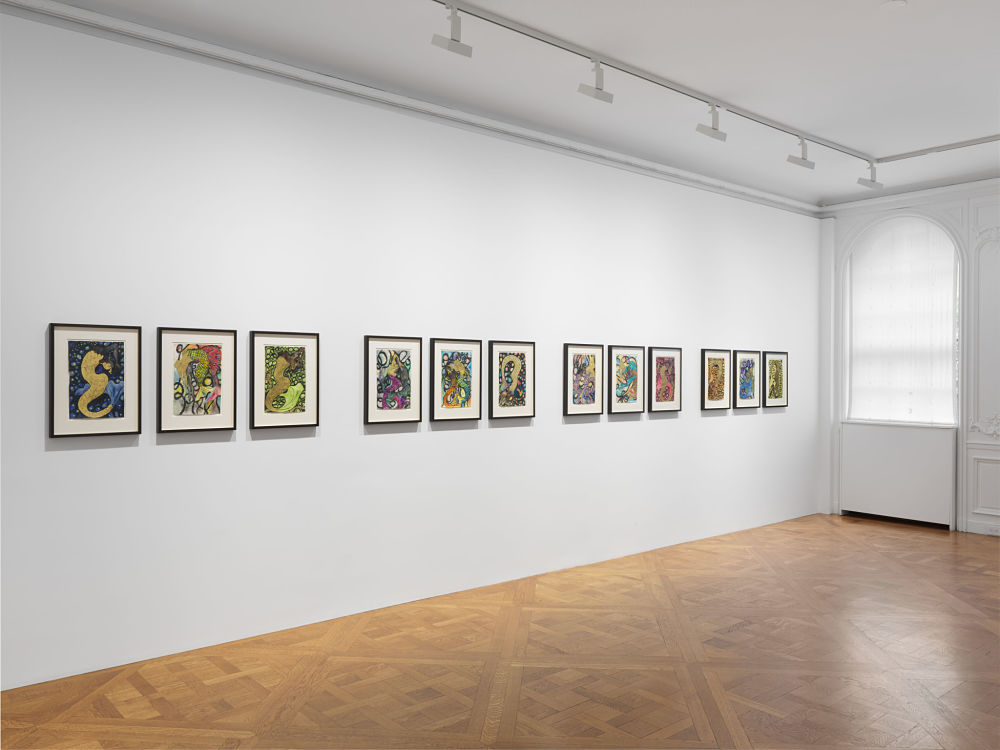 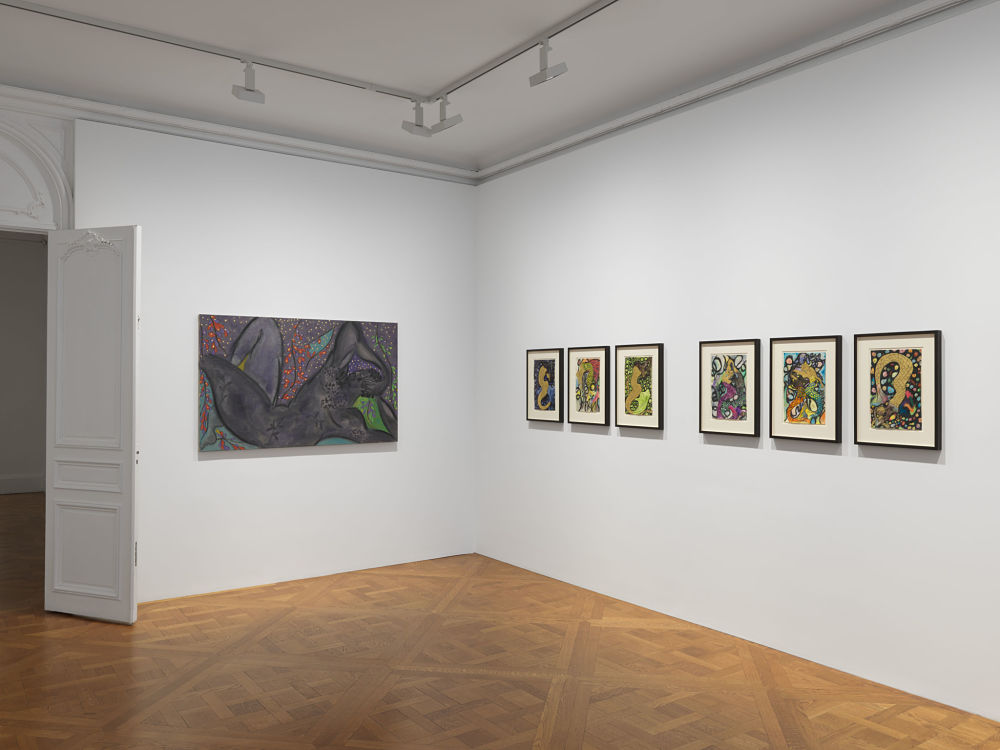 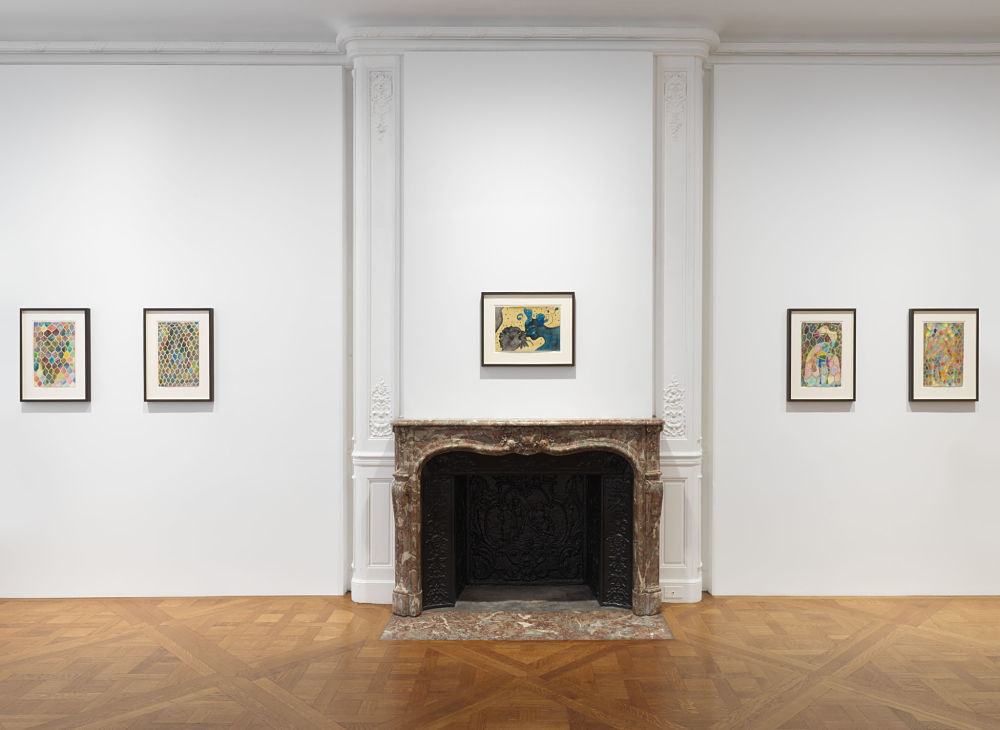 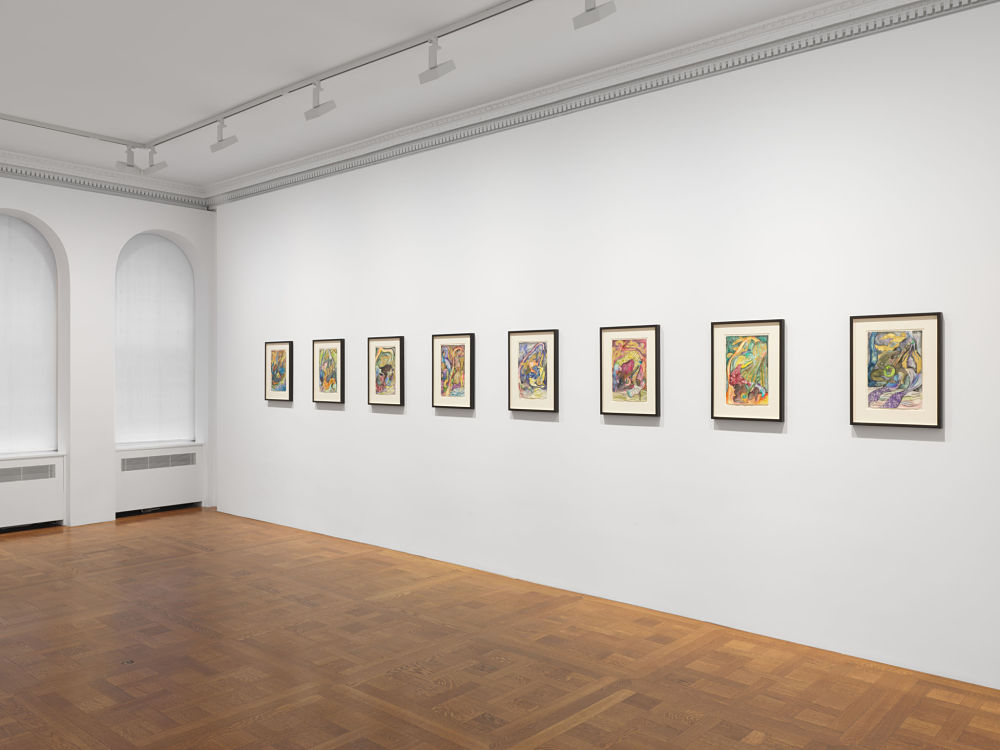 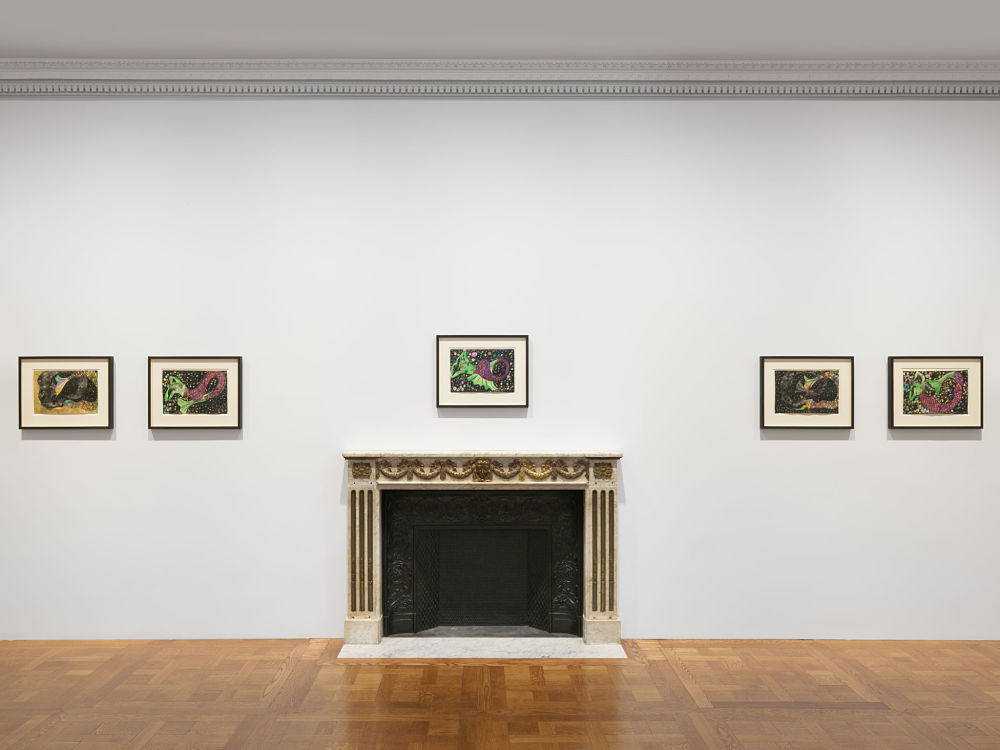 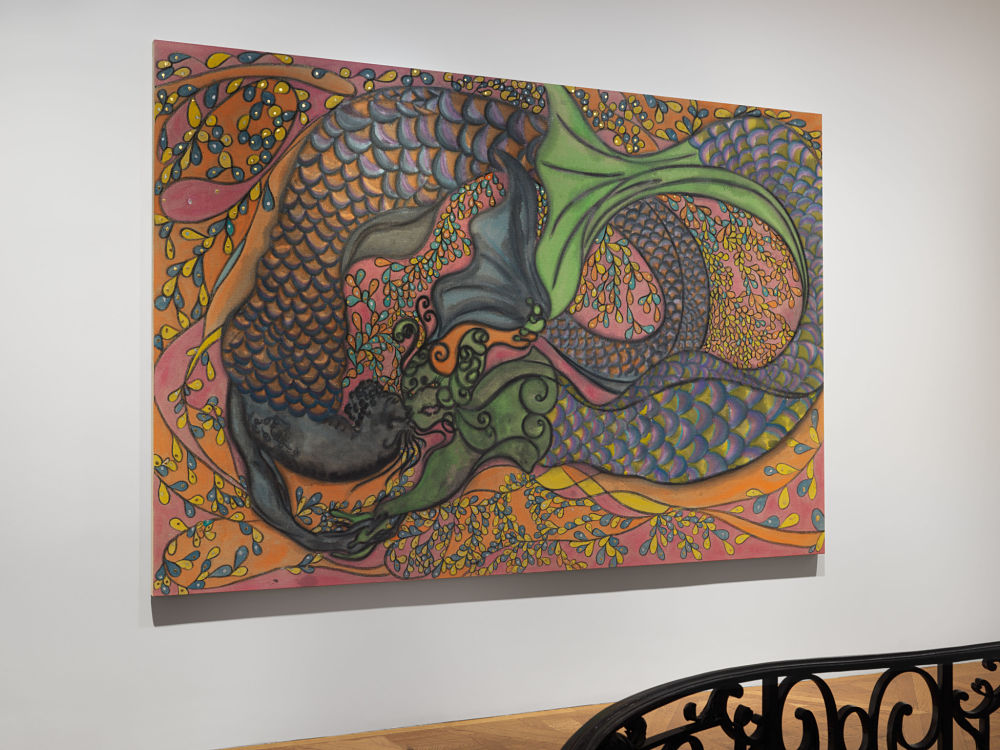 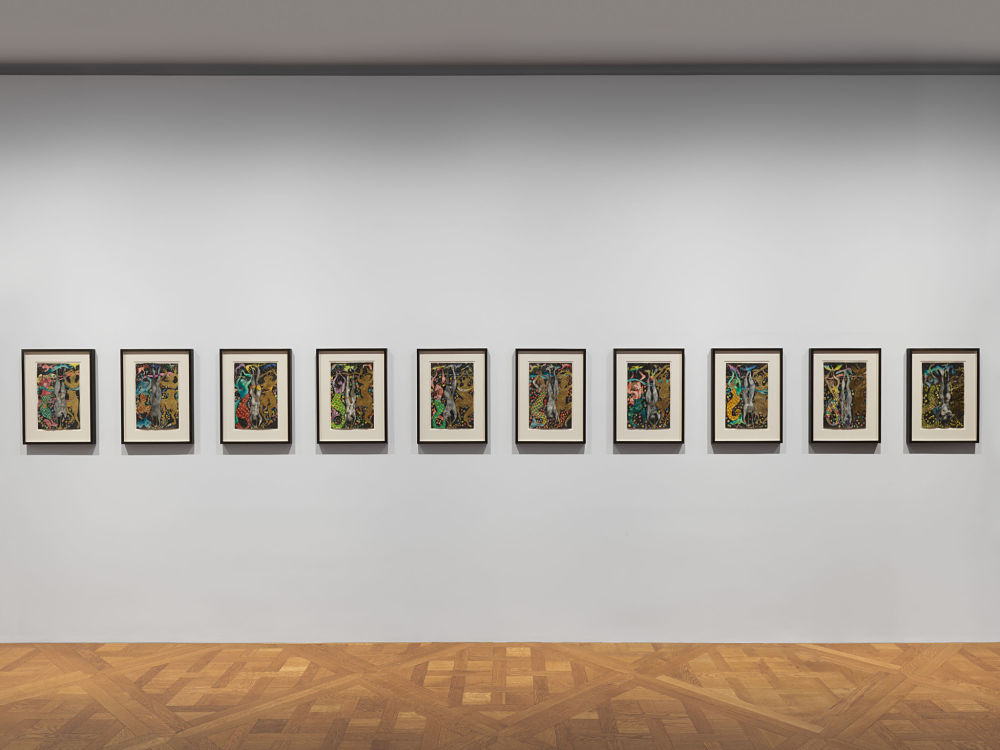 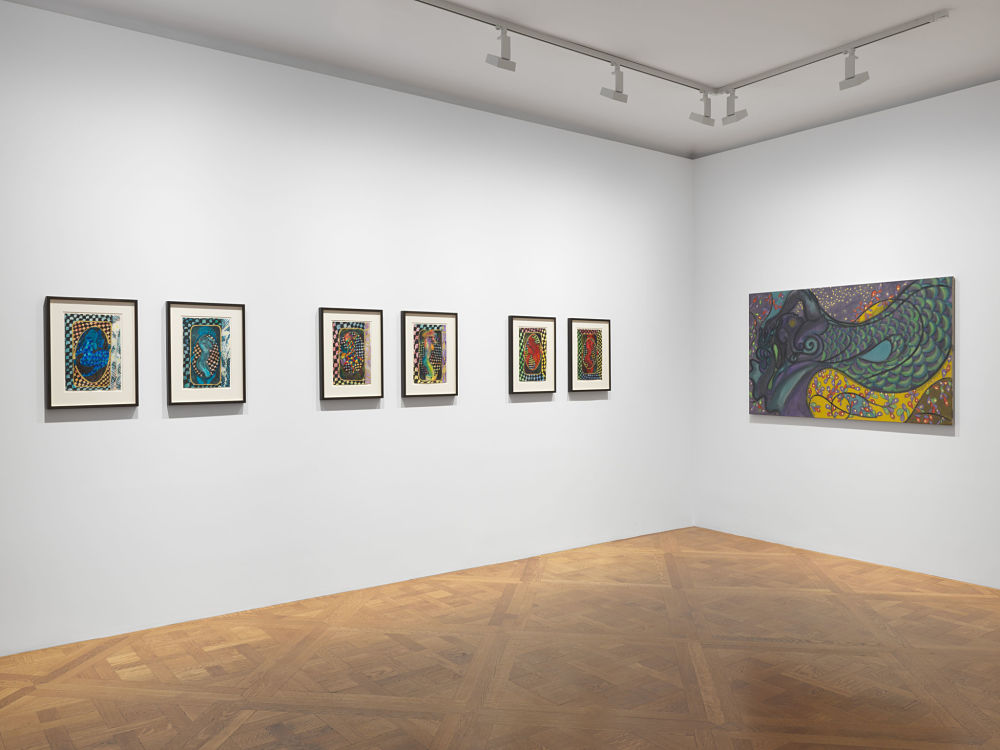 The title of the exhibition references René Magritte’s eponymous painting of 1935, which Ofili explores in drawings that employ the compositional organization of the Surrealist’s work as a structure for his own rich and layered colorism. The interwoven patterns and forms in these works create dynamic visuals in which the delicately rendered surfaces optically pulse and vibrate.

Homer’s Odyssey serves as another central theme of the show, with several drawings and paintings devoted to the figures of Calypso and Odysseus. Inspired in part by the music of the island of Trinidad, where Ofili has lived since 2005, the artist has reimagined Calypso—traditionally represented as a deceptive femme fatale—as a striking mermaid, and he has visualized Odysseus as a beautiful, dark-skinned suitor. In the paintings, Ofili presents the characters with curving bodies, sumptuously spread out across the compositions and displayed in layered surfaces filled with arabesque vines and bubble-like forms.

In one group of drawings, Ofili depicts the two mythical figures lovingly intertwined, visually evoking the couple’s passion through compositions that mix strong graphic lines with lush, kaleidoscopic colors and gold leaf. Other drawings feature Calypso luxuriating in the depths of the sea, while related works depict nymphs, also rendered as mermaids, with luminous shimmering bodies, diving through dark waters pocketed with distinctive colors. Ofili’s representation of the figures was inspired by Emily Wilson’s recent translation of Homer’s ancient text. Notable for being the first translation of the poem into English by a woman, Wilson’s translation thoughtfully reconsiders the portrayal of the epic’s female characters.

The exhibition also features a series of etchings by the artist based on Shakespeare’s Othello. In a suite of ten prints, Ofili illustrates scenes from the tragedy on Othello’s forehead. Rendered in stark lines, Othello’s face encompasses the entirety of the paper’s surface, which has been coated with black mica, giving the surface a subtle iridescent glow. The prints will also be presented in a forthcoming publication by David Zwirner Books, the first in a series of titles featuring contemporary artists illustrating Shakespeare’s classic texts.

Chris Ofili’s (b. 1968) previous exhibitions with David Zwirner include Paradise Lost (2017), Afro Margin (2009), and Devil’s Pie (2007). For the recent opening of its new building, the Institute of Contemporary Art, Miami, is presenting an extended-run installation of paintings by Ofili, on view from December 1, 2017 through October 27, 2019, that evolves over the course of its duration, with works being added and removed over time. In 2017, The National Gallery in London presented Chris Ofili: Weaving Magic, the first public presentation of Ofili’s The Caged Bird’s Song (2014–2017), a tapestry commissioned by the City of London’s Clothworkers’ Company. The exhibition also featured drawings and an elaborate wall mural that Ofili created on site.

The artist’s work has been the subject of solo exhibitions worldwide, including Chris Ofili: Night and Day, the first major museum solo exhibition of his work in the United States. The show was organized by the New Museum in New York, where it was first presented, in 2014, and traveled to the Aspen Art Museum in Colorado in 2015. That same year, a group of Ofili’s paintings was included in All The World’s Futures, the 56th Venice Biennale, curated by Okwui Enwezor.

Other monographic exhibitions have taken place at Tate Britain, London (2010 and 2005); kestnergesellschaft, Hanover (2006); The Studio Museum in Harlem, New York (2005); and the British Pavilion, 50th Venice Biennale (2003). In 2017, Ofili was a recipient of Commander of the Most Excellent Order of the British Empire (CBE), awarded by the Queen, and in 1998, he was awarded the prestigious Turner Prize.