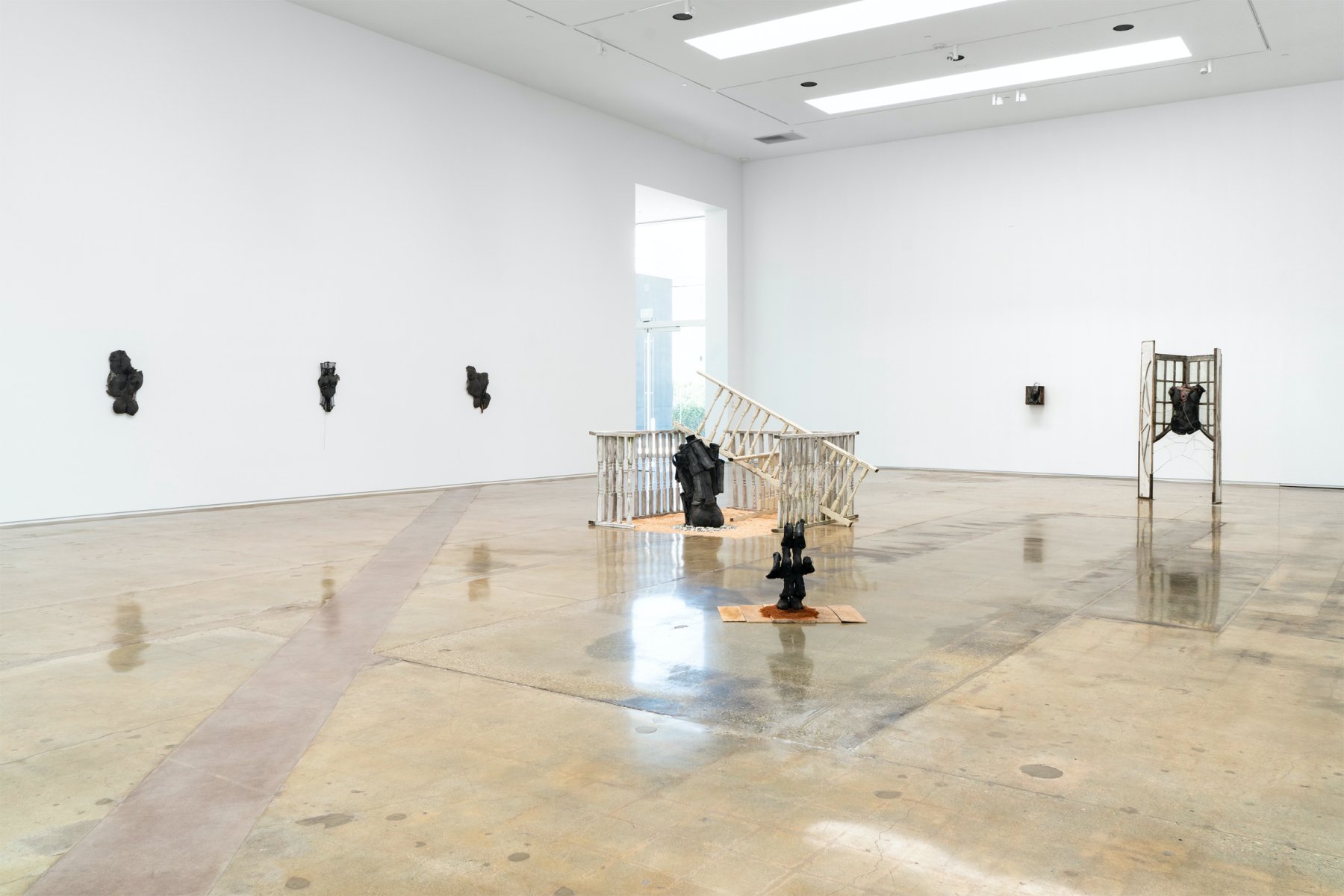 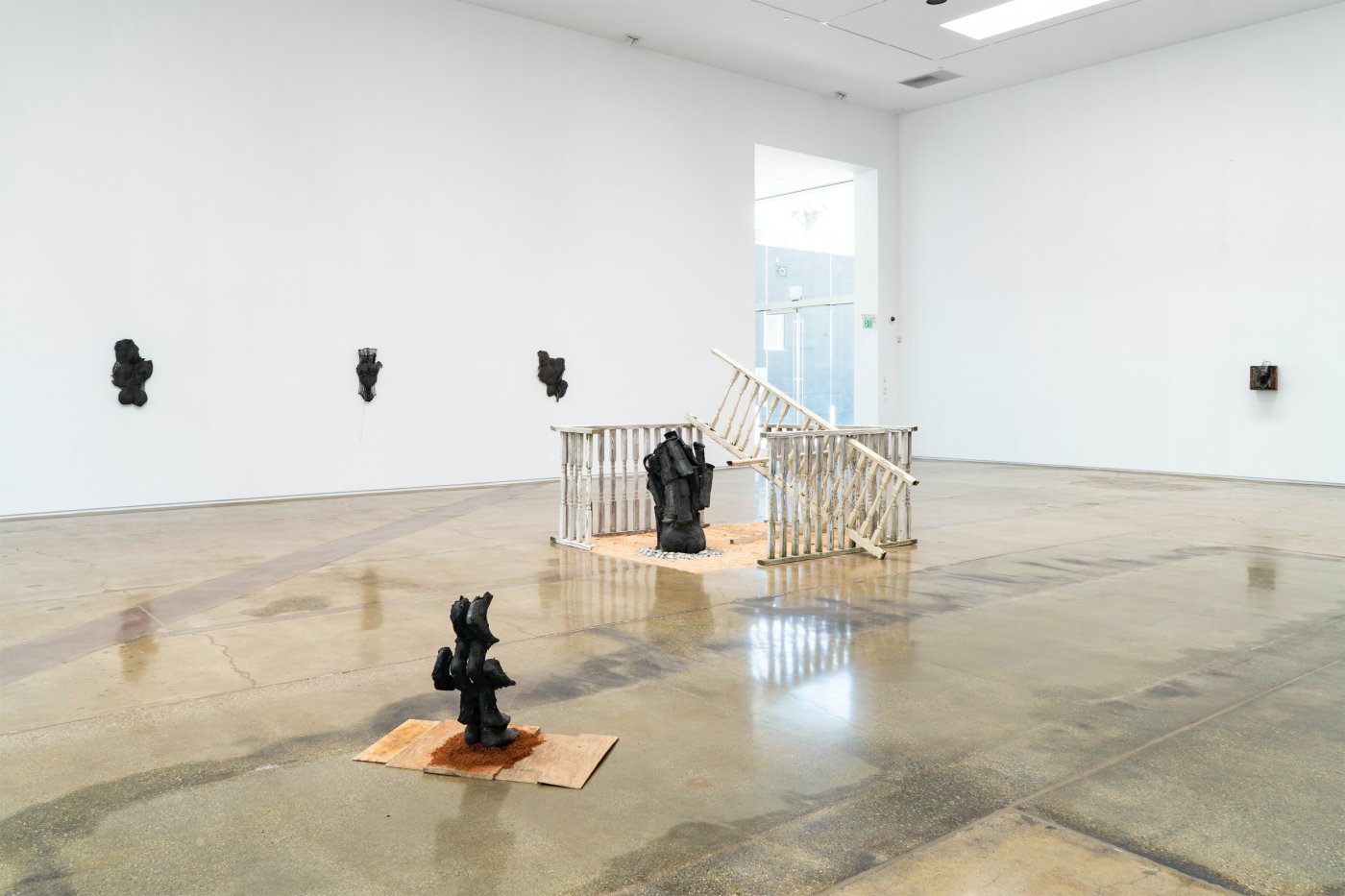 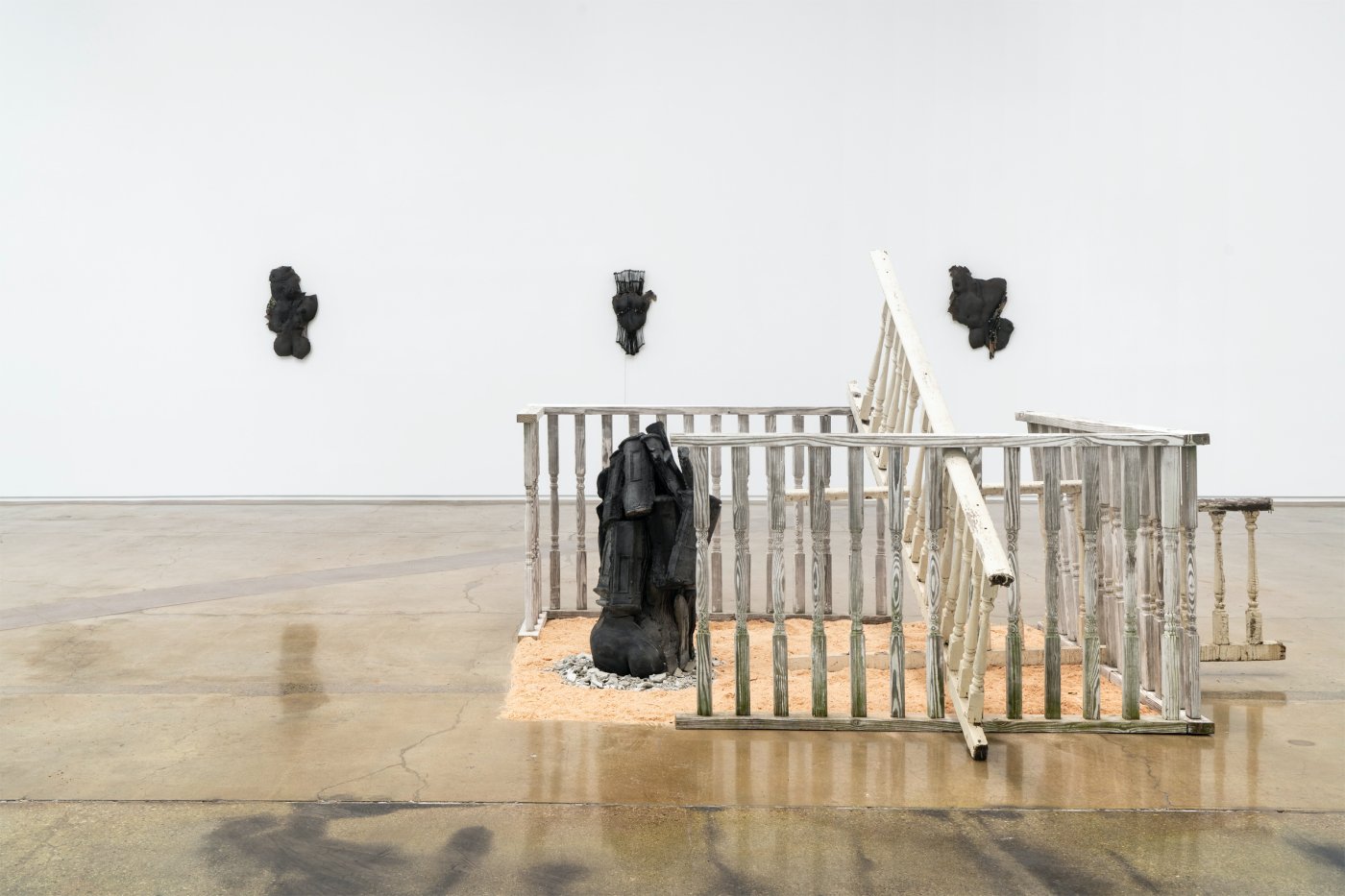 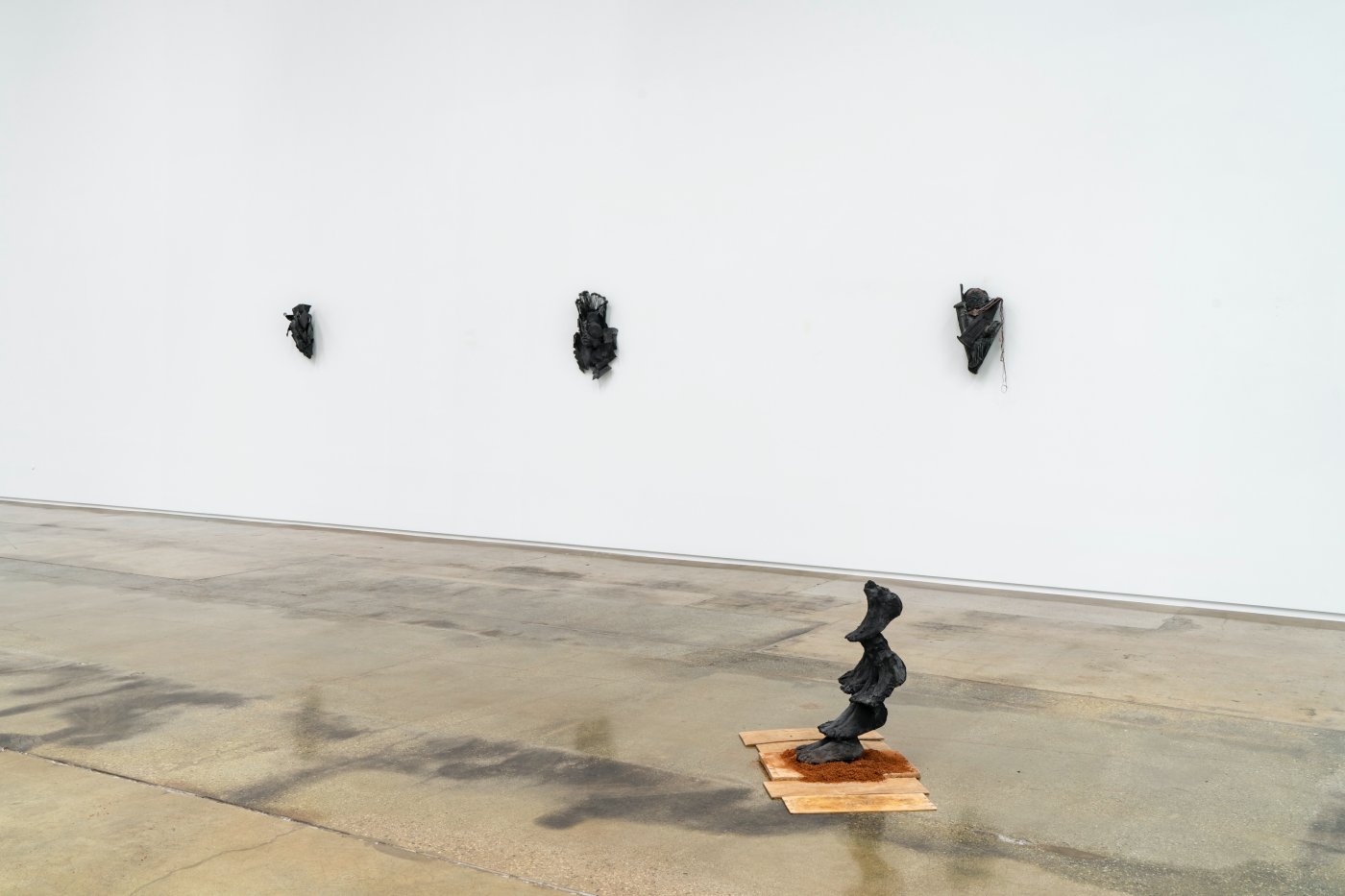 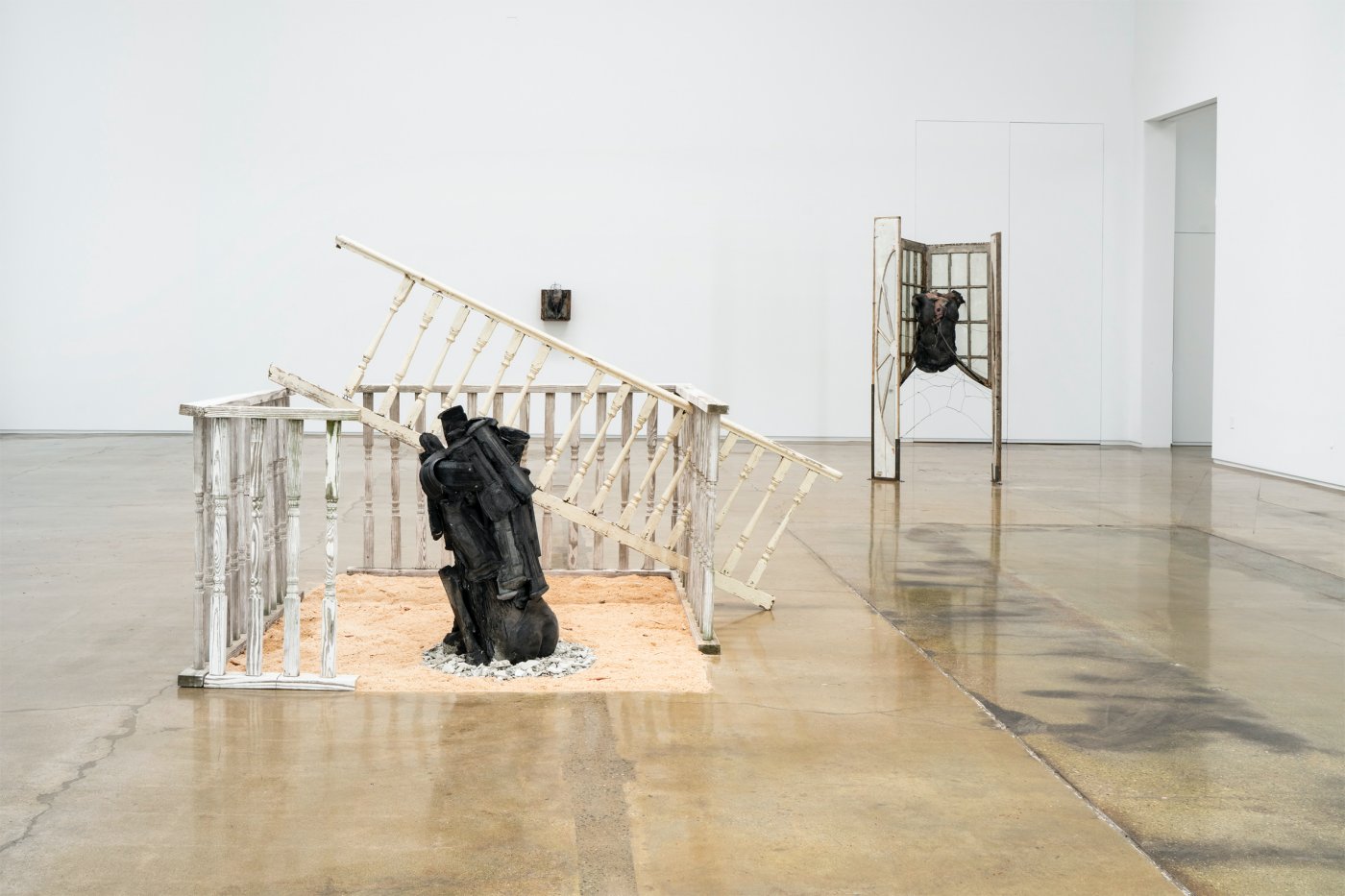 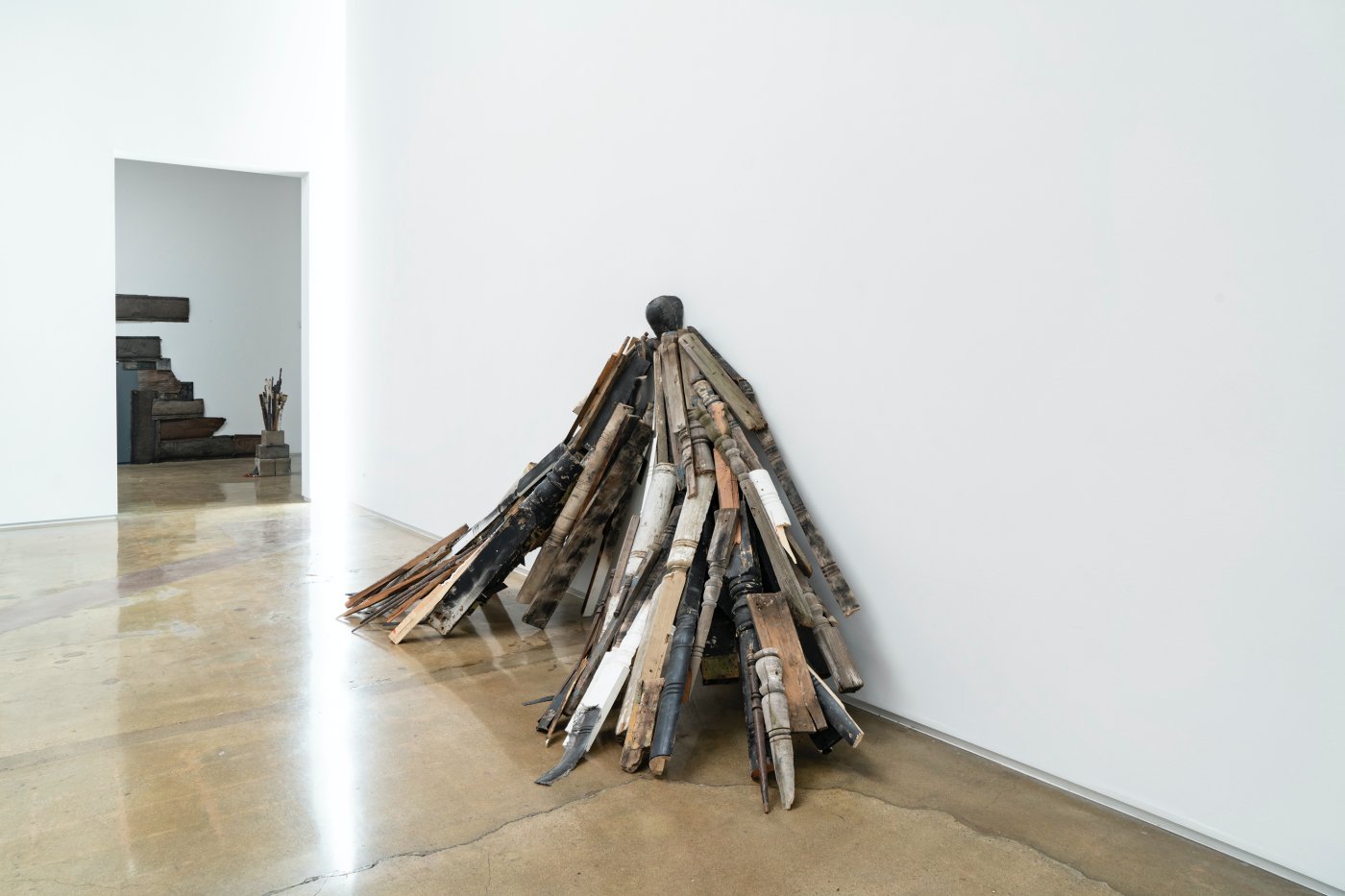 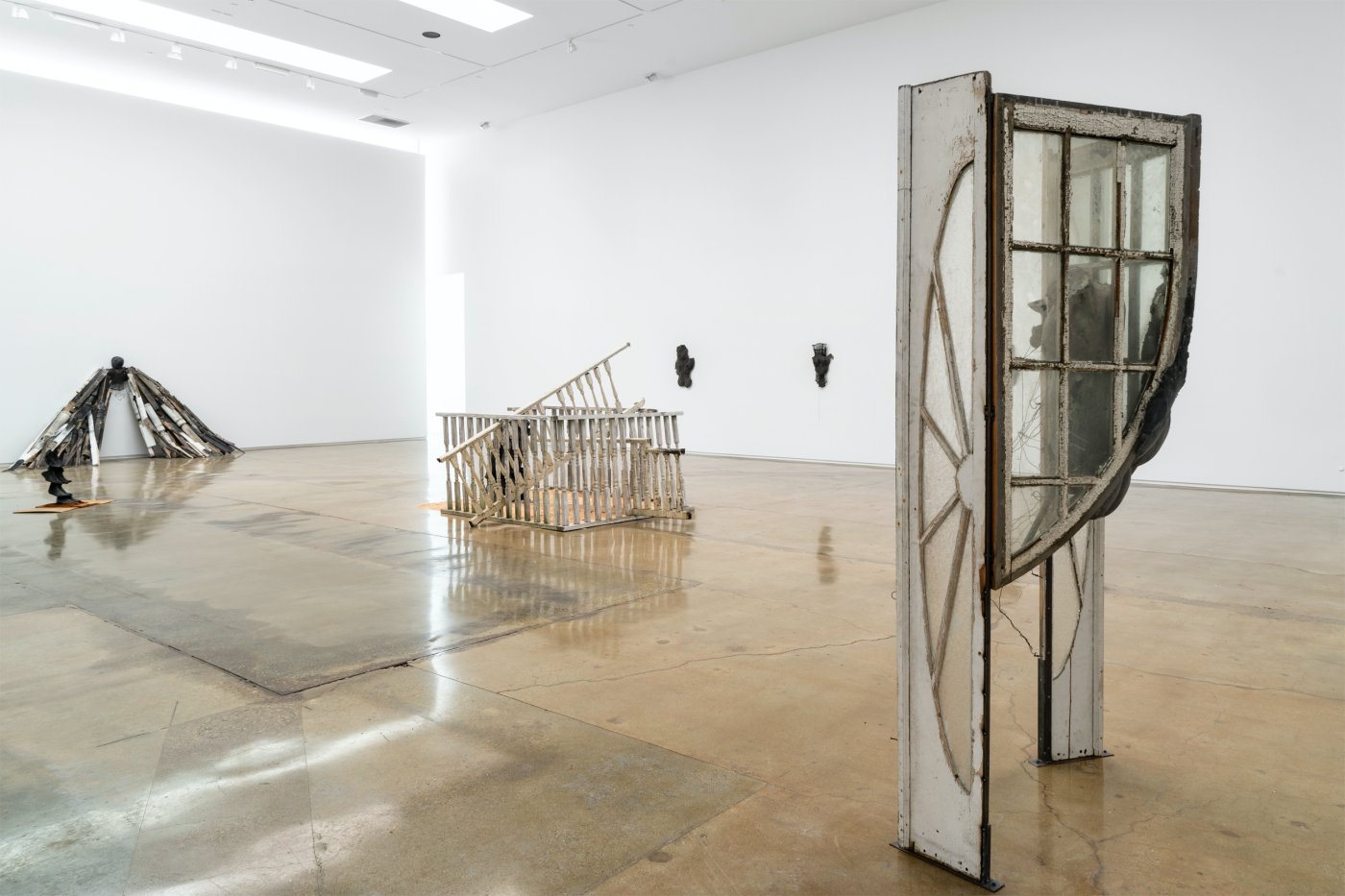 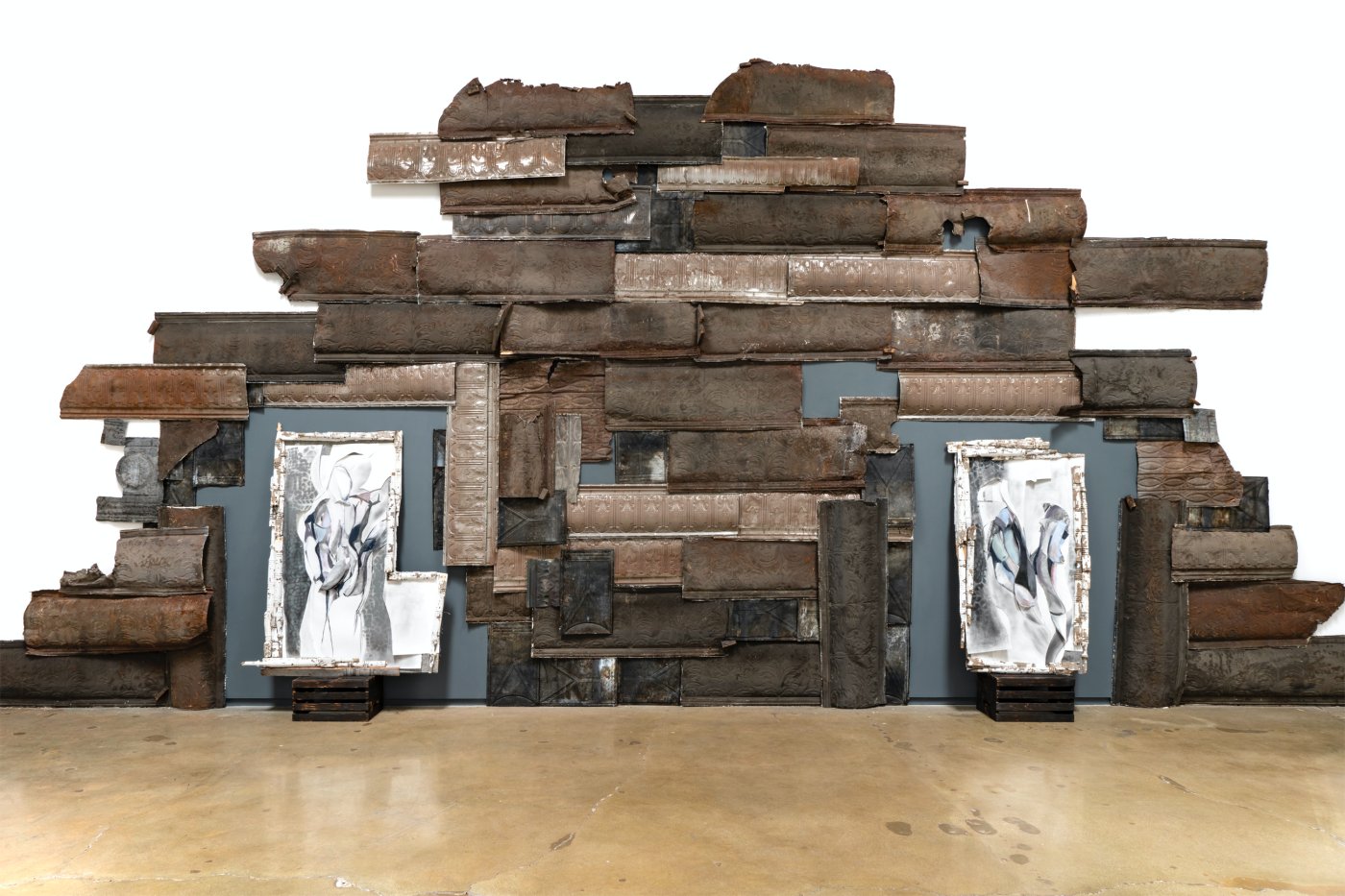 Thomas’ practice is an interdisciplinary one, ranging across hand embroidered mixed media painting, collage, drawing, and sculpture. Identifying as a non-binary queer person of color, Thomas’ powerful figurative assemblages examine the difficulties faced by defining one’s identity in contemporary society. Through contorted figures and fractured compositions that float seamlessly between historical and contemporary styles and references, Thomas presents a process of becoming: a transition from dysmorphia to metamorphosis. Thomas states, ”through fracturing faces, I try to represent how individuals compartmentalize trauma and sometimes create multiple identities in order to heal. Sometimes this is how dissociative identity disorders develop. It’s also emblematic for when people of color have to color-switch. You often have to split into multiple identities and veil who you most comfortably are.”

Reminiscent of the diverse, mixed media practices exhibited by Robert Rauschenberg, Faith Ringgold, and David Hammons, Thomas’ own application of materiality becomes a language for translating cultural references and personal experiences. Raised with a strong religious upbringing, Thomas’ work often grapples with conflicting beliefs, values, and desires, primarily using tactile methods of sculpture as an expressive, visual language that interprets personal feelings of nostalgia, longing to belong, and affirmations of self-identity. Past photographs and images of the self are deconstructed into sketches and then built back up with rebar wire, plastic urethane, nails, screws, and thread. Thomas states, “I introduce material to elaborate meaning; a solid material or dense material signifies something that cannot be penetrated and is indestructible. I might use bibles, or religious doctrines that are very rigid, to create a body and let that be a visual language.” Figures appear to shift in and out of focus, resulting in visceral collisions of abstraction and clarity that invite viewers to decode the fraught relations between memory and reality, visibility and understanding.

For their solo show, Antithesis, Thomas denotes how opposing objects or bodies can exist within a single environment or space, creating a utopia of their own design. The artist bonds binary qualities together, crafting fluid subjects who evade simple categories… modeling the autonomy they seek. Thomas’ usage of multimedia allows them to examine issues of race, gender, and sexuality. In particular, photography and stitching are combined as a way to preserve and repair history. In Thomas’ work, the loose threads allow for a meaning of your own interpretation, while the usage of different mediums paints a picture of a loaded and rich past. Utilitarian materials such as rebar ties found in concrete to hold skyscrapers together are re-cast to construct the frame of Thomas’ bodies, but only the outline is present. Thomas states, “So similarly to a skyscraper, in my art, they can be used to keep a person together as much as possible in a society that oppresses some individuals at a disproportionate rate.”

As an amalgamation of ideas about capitalism in relation to Christianity, Antithesis provides an indication of how social constructs are being corrupted. Inspired by Colonial design, Thomas uses deconstructed materials from a New England demolition site to build an array of sculptures ranging in size along with a selection of works on paper. The silicon bodies in these sculptures wear the parts of building materials – deconstructed and reconstructed several times from cement, foam, rigid plastic and more. Thomas builds housing units for the sculptural body using readymade materials, finding interior parts to repurpose that add an interpretation of function. Thomas states, “I destroy and then I reconfigure”.