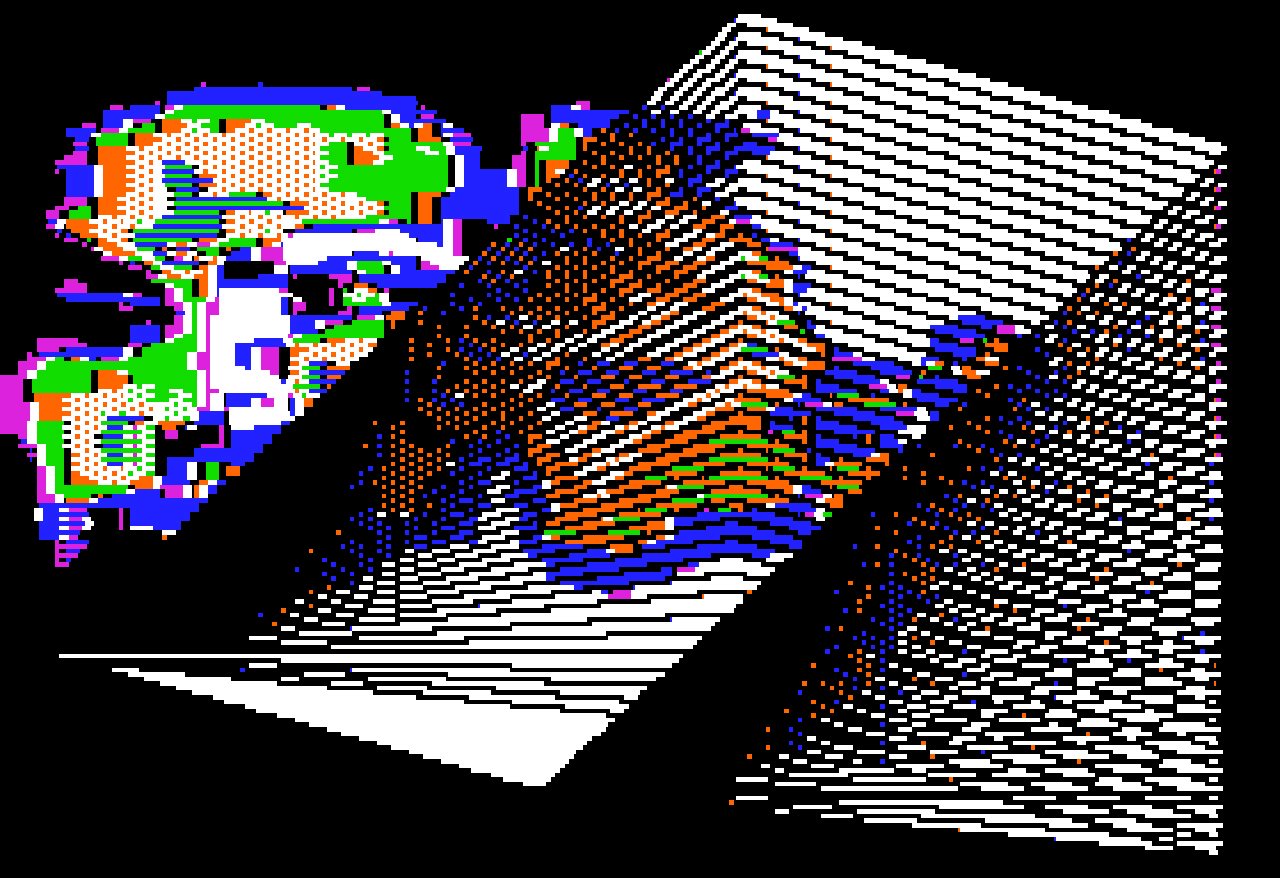 Working across a range of media including textile, painting, digital print and digital slideshows, Charlotte Johannesson has developed a practice which surpasses technological and material limitations. Her work traverses the gendered binaries of weaving and coding, material and virtual, craft and industry, with each assumed polarity becoming a malleable attribute of her practice. Johannesson is foremost known for her pioneering work relating the craft technology of the loom and the digital technology of computer programming. Circuit expands on this dialogue, providing an account of Johannesson’s extensive practice with digitally-conceived textiles and recent paintings alongside plotter prints and digital slideshows. The exhibition explores Johannesson’s continued engagement with symbolism, science, and the human pursuit of innovation.

Circuit features a sequence of digital slideshows created from the Digital Theatre (1978-85) — Scandinavia’s first microcomputer graphics studio established by Johannesson and her partner, Sture Johannesson, in Malmö, Sweden. As a self-organised platform for research and artistic projects, the Digital Theatre has been described as one of the most advanced Apple systems of its time, consisting of seven computers, printers, monitors and synthesisers. The Digital Theatre’s mission was to create ‘micro-performances’ which Johannesson realised through a sequence of digital graphics. In these, Johannesson articulated her own visual compendium, intermixing surrealist symbology with pop cultural iconography, political satire and graphic abstraction.

From these early experiments with digital graphics, Johannesson created numerous plotter prints. These laboriously executed prints continue Johannesson’s progressive image-making and protean signification. Coding each print to the same pixel dimensions of her loom, these works channeled contemporary media and personal graphics as though programming a speculative, cybernetic future, seen in phrases such as: Take Me to Another World and When the Screen Is Rolled Up the Great Sky Opens. Johannesson’s image production from this period was consonant with the social dissent and cultural development of its time: 1960s counterculture, feminism, punk, commercialised image culture and techno-utopian promise. Prints such as Identify (Double) (1983), Dancing Native American (1983) and Design (1984) reveal compositional symmetry within intricately tessellated patterns, like a digitised inlay. Vote? (1981-86), Peace and Johannesson’s Texture series (both 1981-86), feature overlaid symbols such as world maps and doves with geometric shapes to generate diaphanous and ethereal layers of checkered, polychromatic pixels.

The proliferation of computer programs in the 1980s established a precedent for digital graphics which disinterested Johannesson, compelling her turn to painting in the 1990s. Here, Johannesson recycled fragments from her plotter prints to test the reach of individual motifs and their potential multiplicity. Such a manoeuvre is seen in the recurring motif of the camel in her Caravan series (1990), synthesising the camel with the logic of the premodern caravan network. To create these paintings, Johannesson implemented a self-imposed rule that ensured each composition included a camel and palm tree. This latent coding echoes the inherent limitations of the loom and computer program, both of which dictated the remit of creative possibility. Caravan networks also functioned as communication networks, bringing news to residents while establishing the exchange of premodern cheques. In this sense, Johannesson considers the circulation of knowledge, fiction, and technological invention embedded in the caravan network as an ancient predecessor of the internet.

Circuit includes a selection of recent, computer-generated weaves or ‘woven digital graphics’, as Johannesson identifies them. These regenerate material from the Digital Theatre and feature early incarnations of her authorship: world maps, palm trees, propagandistic slogans, self-portraits, cultural iconography and pixellated textures. These textiles reinvigorate Johannesson’s understanding of the computer as resonant with a history of weaving, such as the first punch card-operated mechanical looms of the eighteenth century. This correlation is realised formally, with the format of the textiles translated directly from the number of pixels that compose the original digital files. Echoing her early tapestries from the 1970s, Johannesson’s textiles appear as forerunners of a type of pithy communication which has since become ubiquitous within the digital realm. Her use of the weave, meanwhile, underscores the loom as a transcultural mode of programmed manufacturing that spans modernity. By placing ancient civilisational crafts in dialogue with emerging technologies, Johannesson unravels the false binary between manual and digital production while realising a mode of image-making entirely her own.

Charlotte Johannesson (b. 1943, Malmö, Sweden) lives and works in Skanör, Sweden. Her practice involves working with both the craft technology of the loom and the digital technology of computer programming, exploring their formal and conceptual connections. Trained as a weaver, Johannesson began creating tapestries as art in the 1970s, work that often satirised mainstream politics. In 1978, funded by The National Swedish Board for Technology and Development, she established the Digital Theatre with her partner, Sture Johannesson, in Malmö, Sweden. As Scandinavia’s first digital arts laboratory, the Digital Theatre functioned as an independent platform for both research and artistic projects and has been described as one of the most advanced Apple systems of its time, consisting of seven computers, printers, monitors and synthesisers. From these early experiments across textile and technology, Johannesson’s practice has developed to encompass a range of media including: weaving, painting, digital print and digital slideshows. Across these media, Johannesson continues to challenge the conditions of image- making and to enhance the synchronicity between material and digital production.