Franklin Parrasch presents Pole Star, an exhibition of recent paintings by renowned earthwork and light artist Charles Ross. The works in this show are the first of their kind: their imagery captures celestial geometries inspired by Star Axis, Ross’ monumental earth/sky work and naked eye observatory, conceived of in 1971 and nearing completion in New Mexico. Pole Star marks Ross’ third solo exhibition at the gallery. 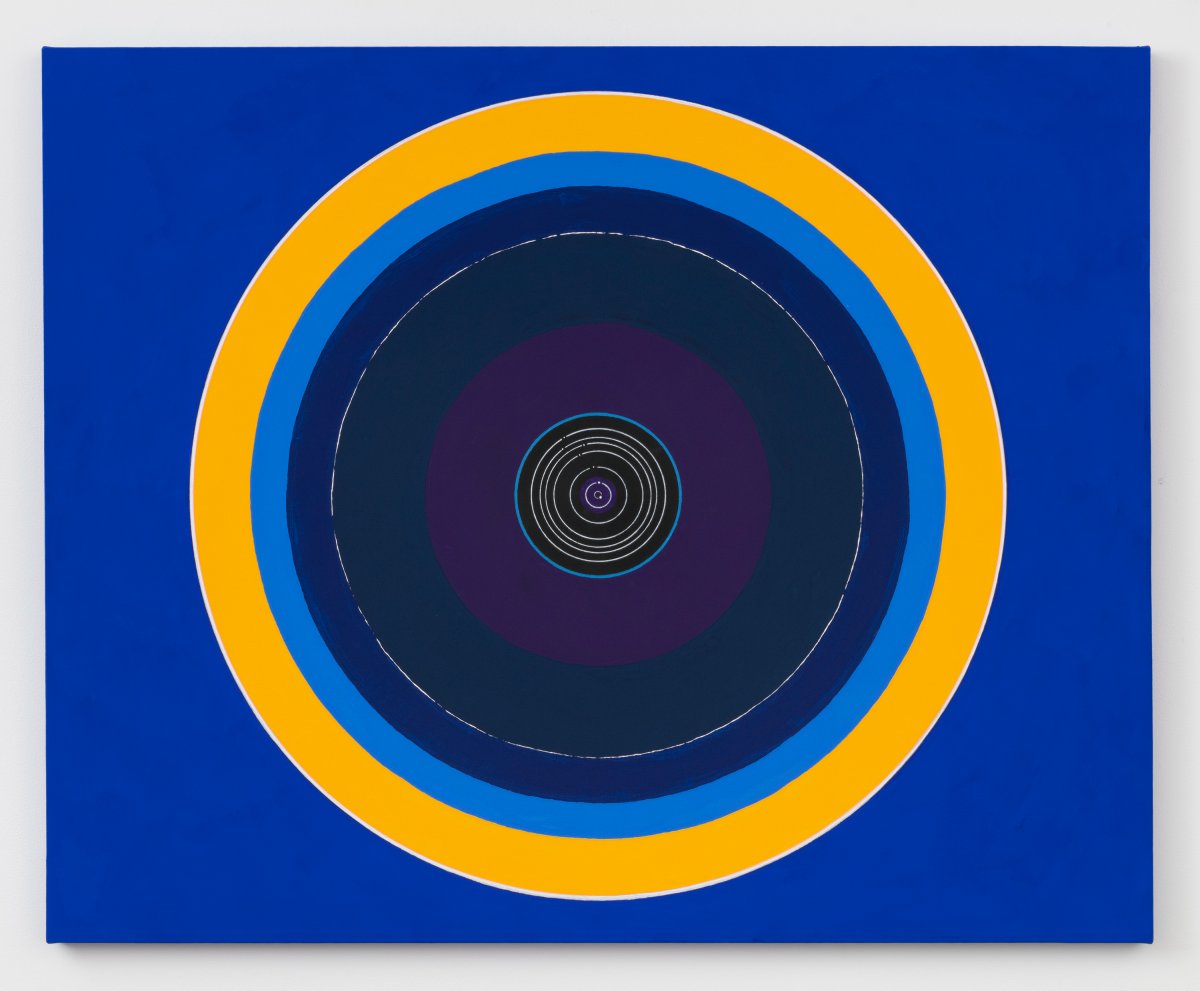 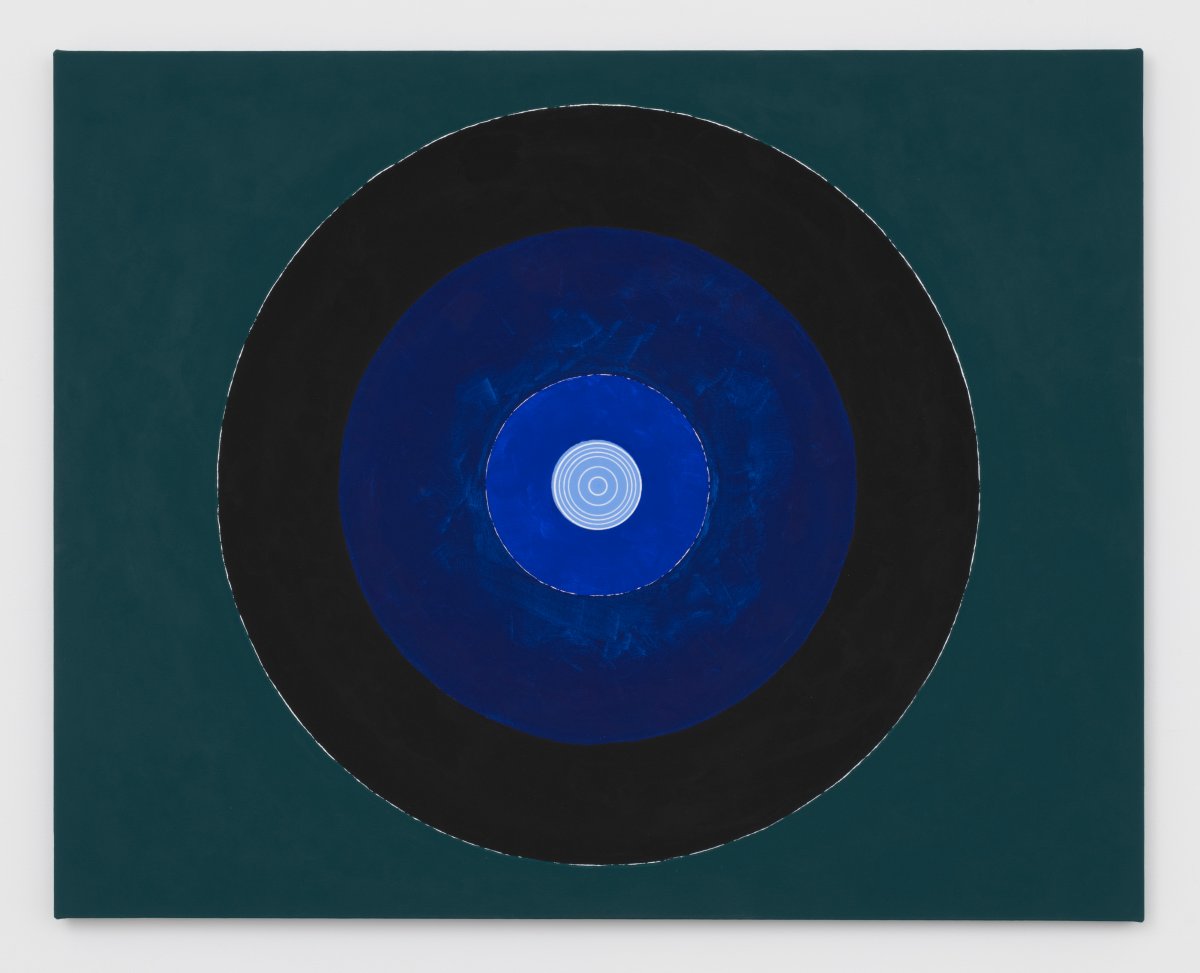 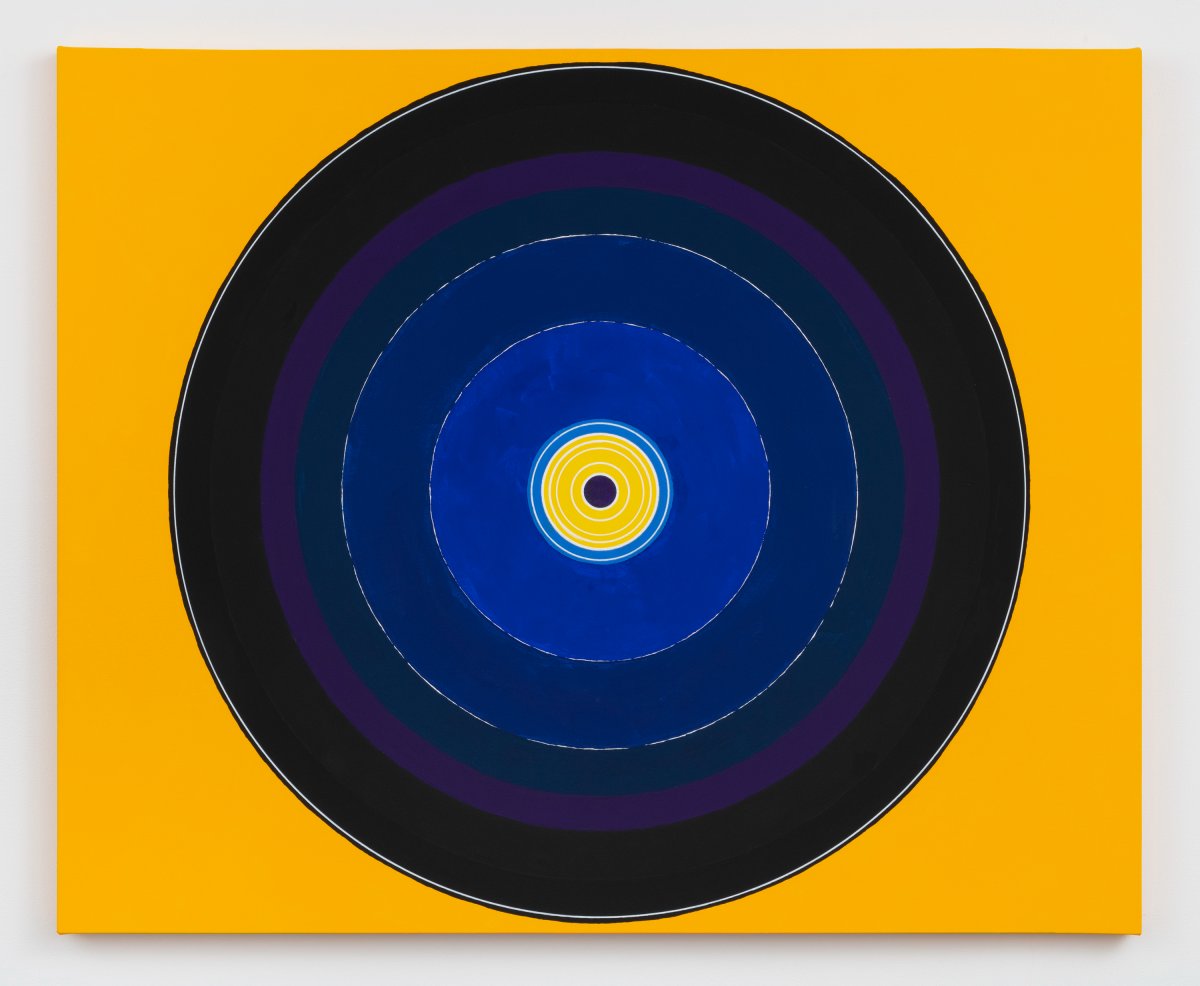 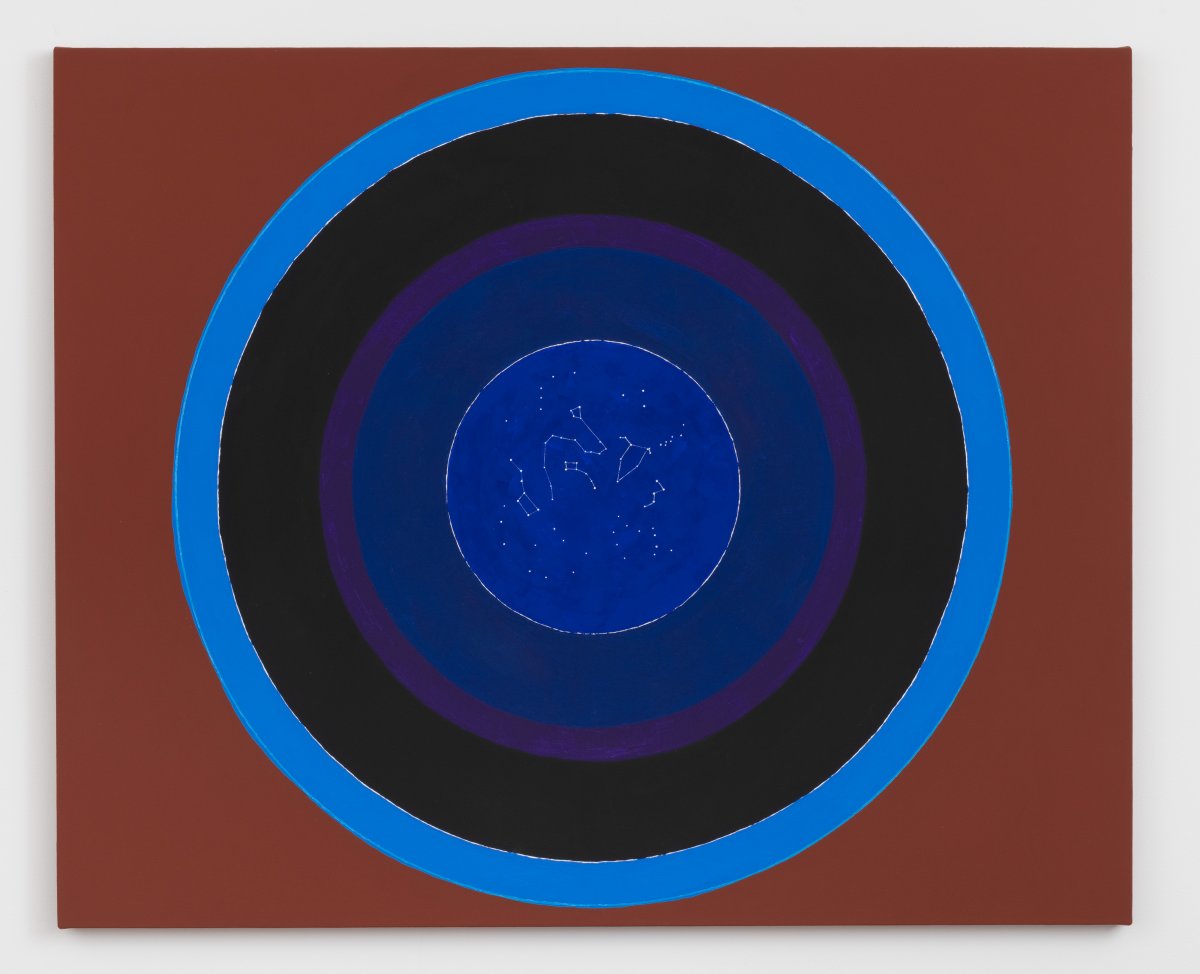 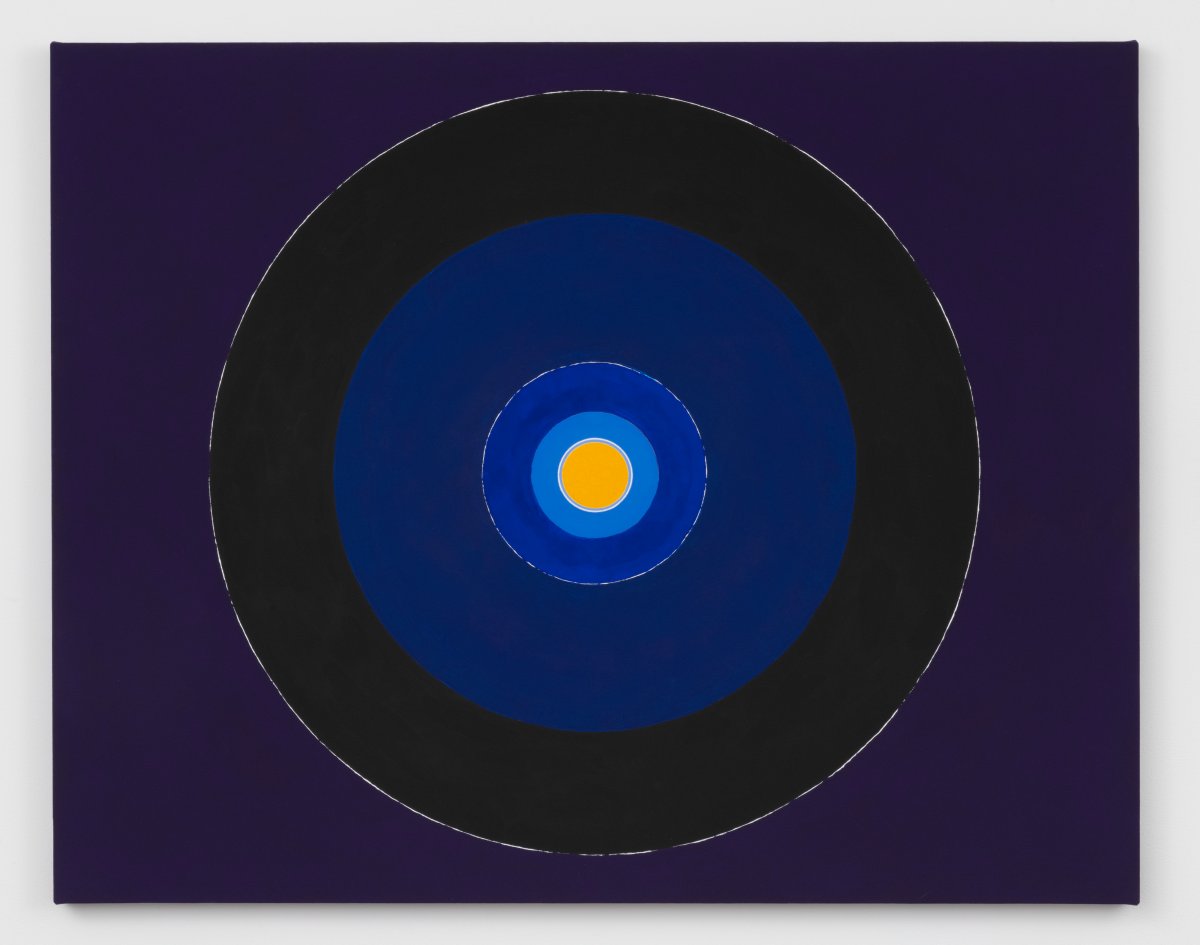 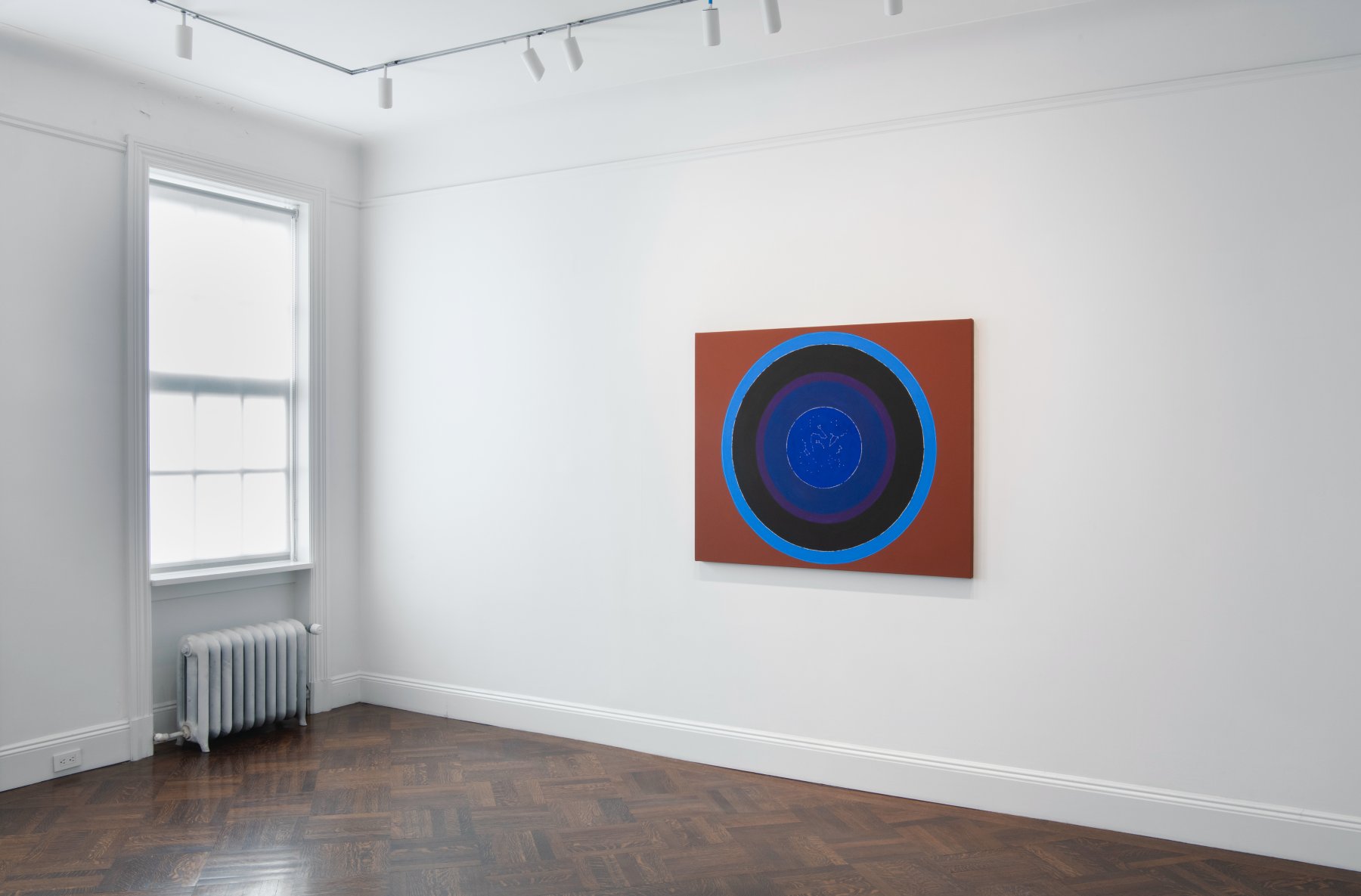 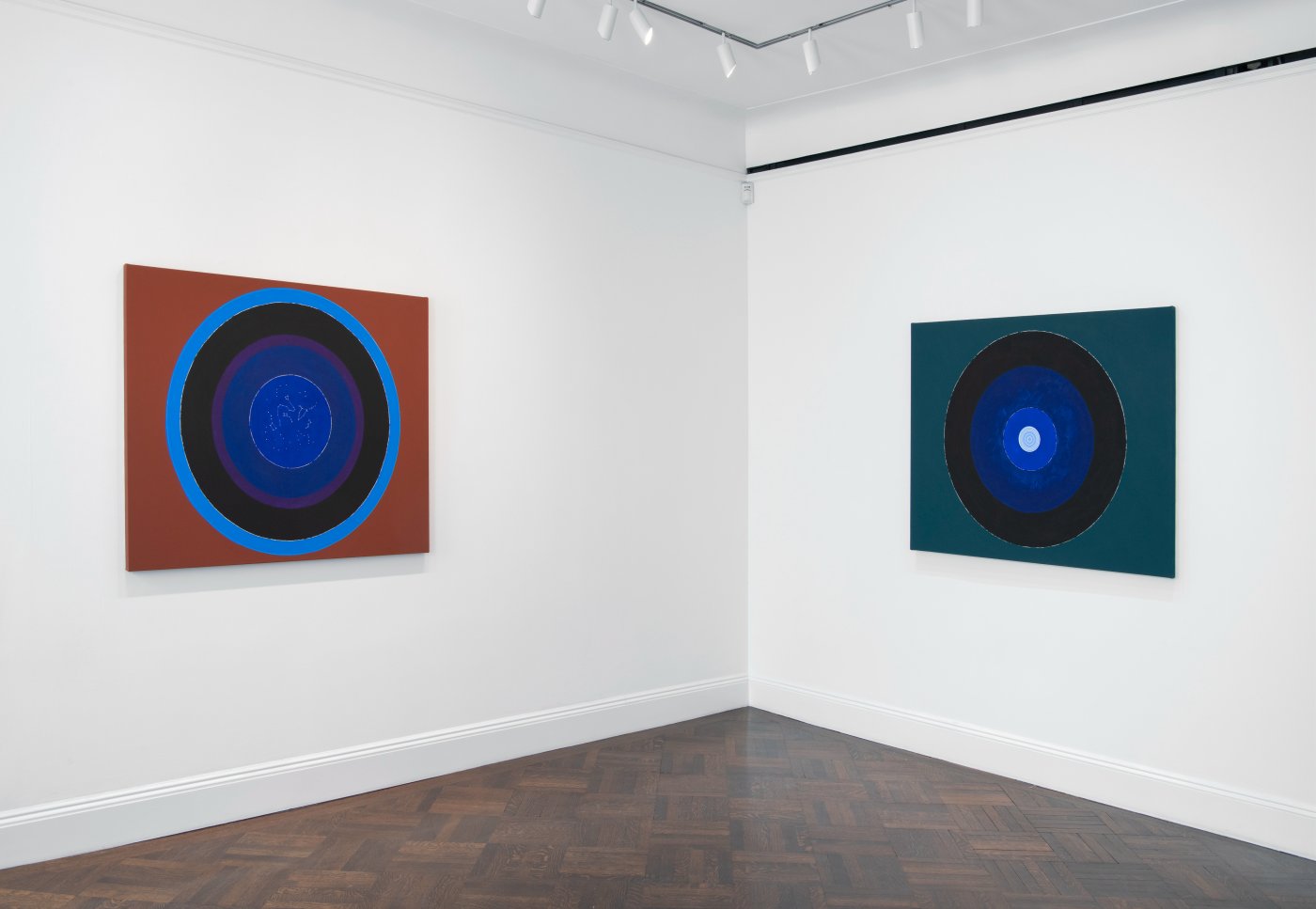 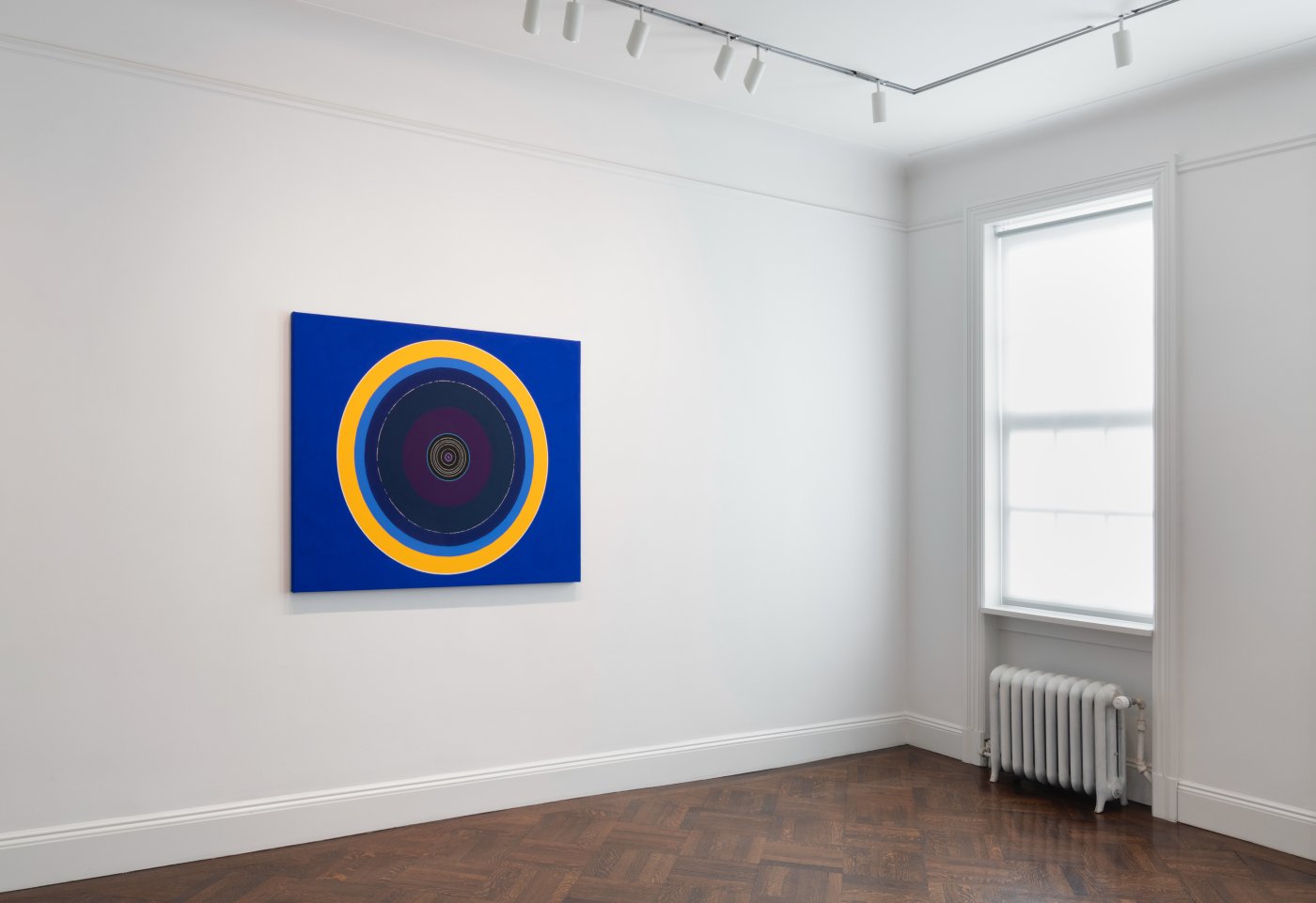 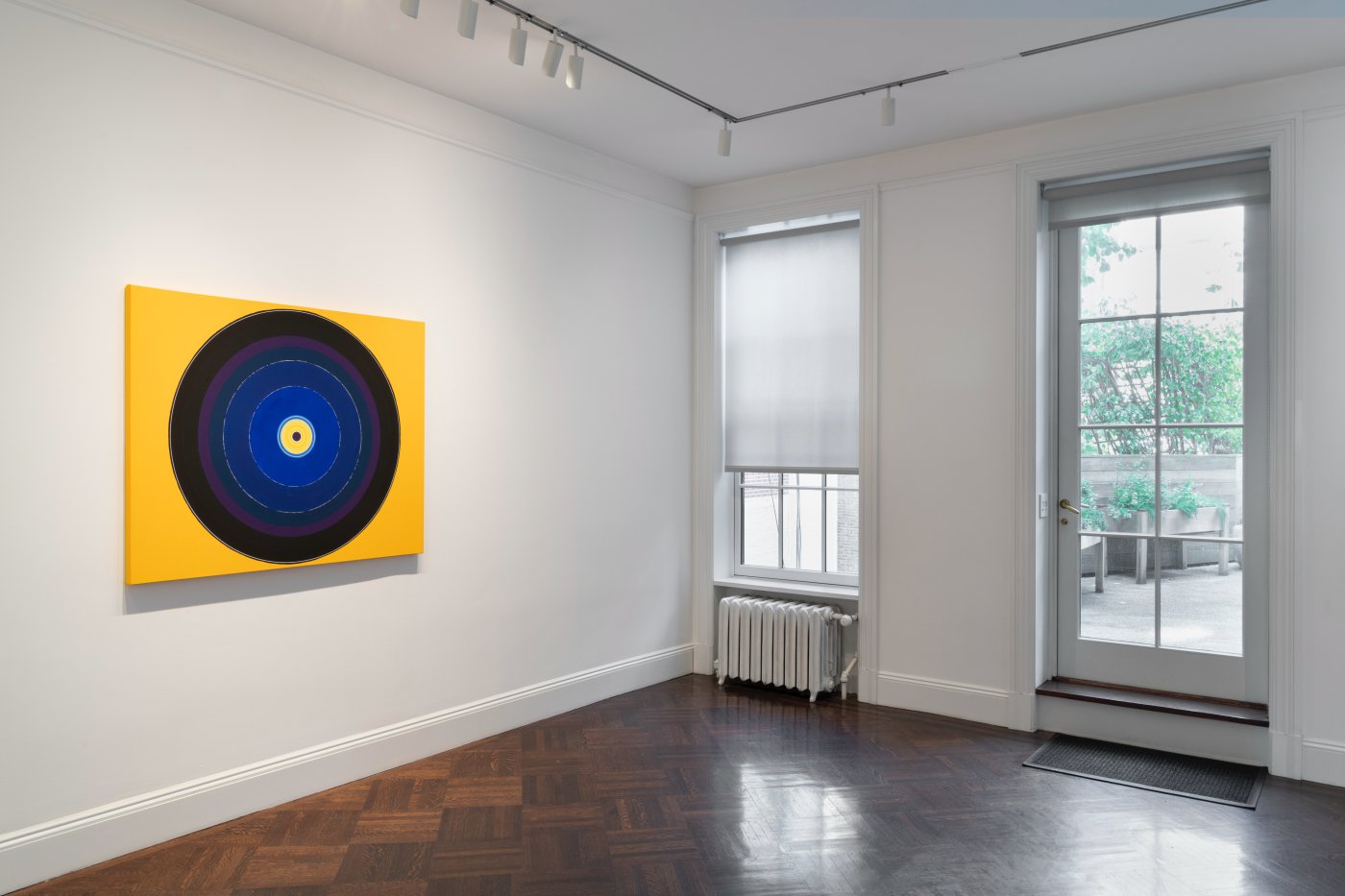 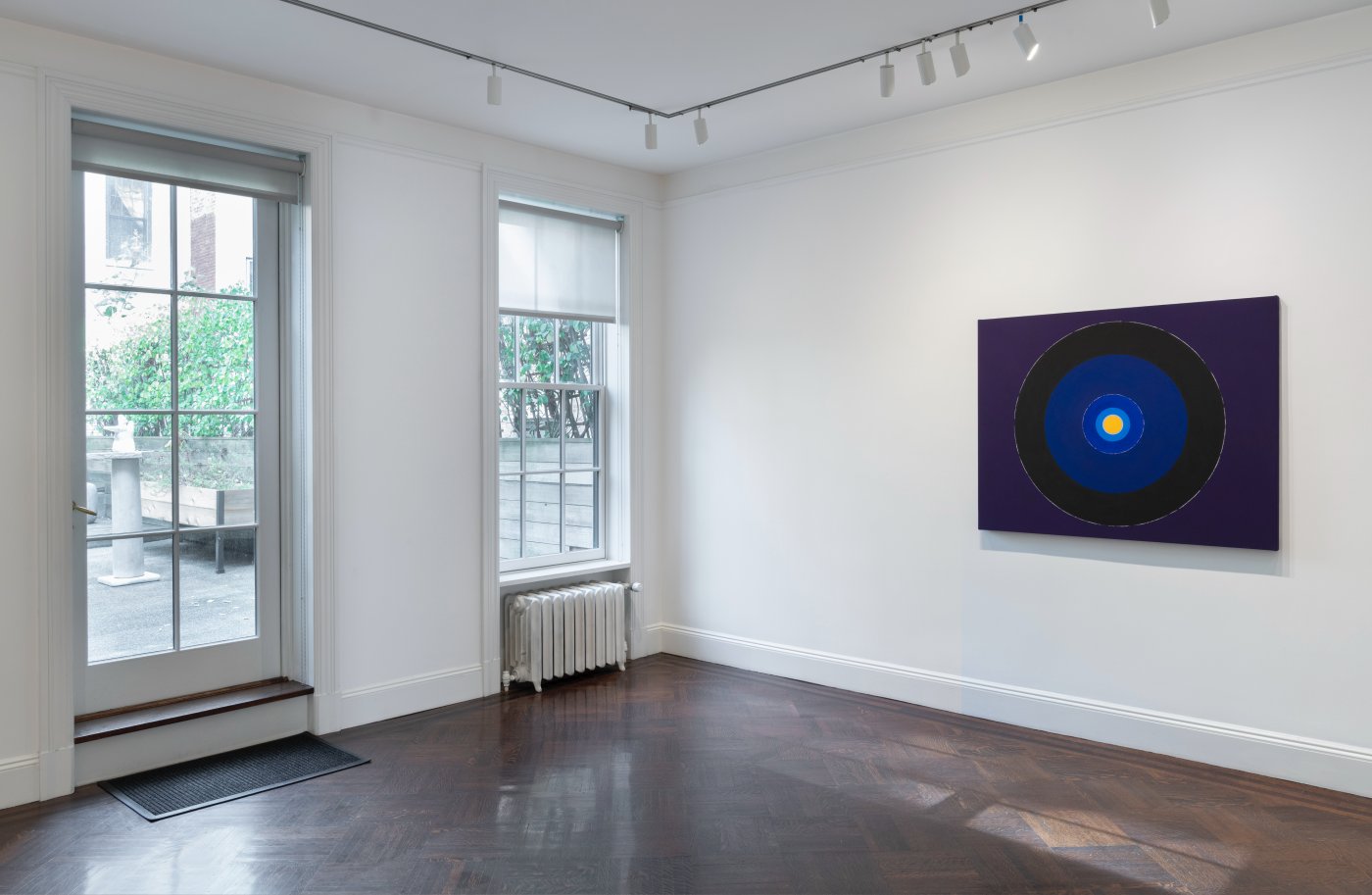 The Pole Star paintings are contemplations on our internal connection with the celestial pole. In these works, the unknowable bounds of the cosmos are punctuated only by constellations and traces of the stars as the earth turns on its axis. This series engages a postmodern visual strategy – the centrally-oriented image harkens to work by such contemporaries to Ross as Jasper Johns and Kenneth Noland – but, crucially, considers qualities of the stars and sky which have been observed and visualized for millennia, and whose earth-to-star alignments are built into Star Axis. Concentric circular bands hover above an infinite depth of monochrome planes referencing the experience of light as a constant yet fugitive trace of line and contesting chromatic presence. Fields of delicately brushed Flashe reveal little to no proof of the artist’s hand; this media’s matte appearance avails the impression of depth of space analogous to the night sky. Ross’ Pole Star paintings conjure perspectives imagined while walking up Star Axis’s “Star Tunnel” stairs, which are perfectly aligned with Earth’s axis and its outward extension to the stars.

Star Axis is eleven stories high and 1/10 mile wide. Located on a remote mesa in the eastern plains of New Mexico, this earth/sky work has been under construction by the artist and his team since 1976.

Charles Ross (B. 1937, Philadelphia, PA) has long explored the substance of light, time, and planetary motion-qualities related to the cosmos and the long journey and multiplicities of light. As an undergraduate student studying mathematics at the University of California, Berkeley, Ross developed an interest in spatial geometry, movement, and the inanimate object. In Ross’ senior year, he took a sculpture course to fulfill a liberal arts requirement and discovered great possibility, and a latent interest in making sculpture by applying the abstract and esoteric thinking he learned in math.

Ross enrolled in Berkeley’s graduate sculpture program shortly after completing his undergraduate degree in 1960, and received his M.A. in Art in 1962; in 1961, San Francisco’s Dilexi Gallery held Ross’ first exhibition. Ross’ subsequent work with the Judson Dancers, in New York during a year- long fine art fellowship, and choreographer Anna Halprin, in San Francisco, continued to inform his consideration of space and form. It was Sol LeWitt, who visited Ross’ studio in New York while Ross was developing his groundbreaking large-scale transparent prism sculptures, who enthusiastically recommended that storied gallerist and patron Virginia Dwan meet Ross. Dwan Gallery held Ross’ first solo exhibition in 1968, and continued to work with the artist until 1971 when Dwan closed her gallery. Later, in the early 1990s, Ross and Dwan collaborated with architect Laban Wingert on The Dwan Light Sanctuary located on the campus of United World College (Montezuma, NM) and dedicated in 1996. The Dwan Light Sanctuary is a place of quiet reflection in which Ross placed 24 large-scale prisms, aligned precisely with the sun to produce large solar spectrums always evolving and moving throughout the circular architecture with the passage of the sun.