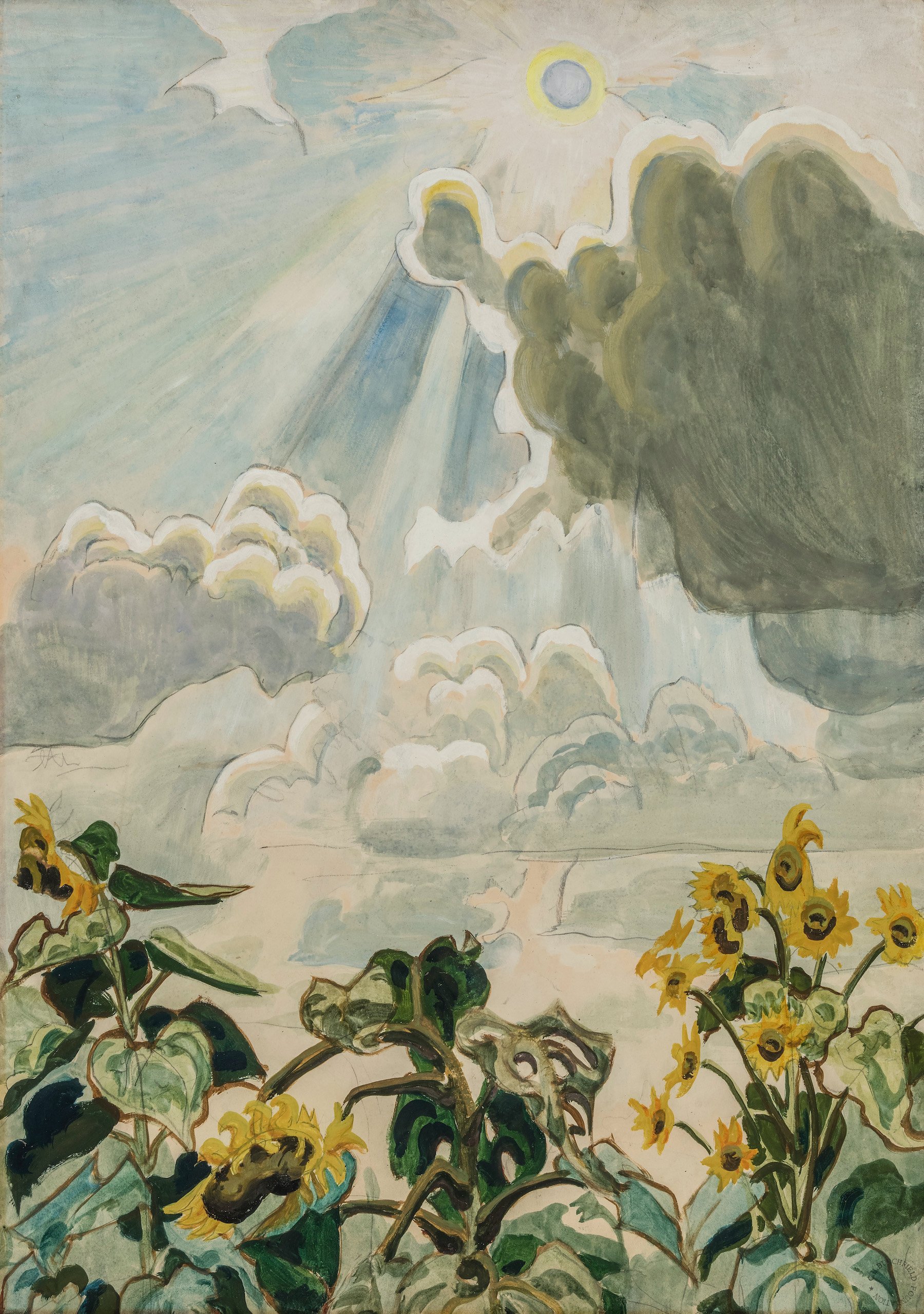 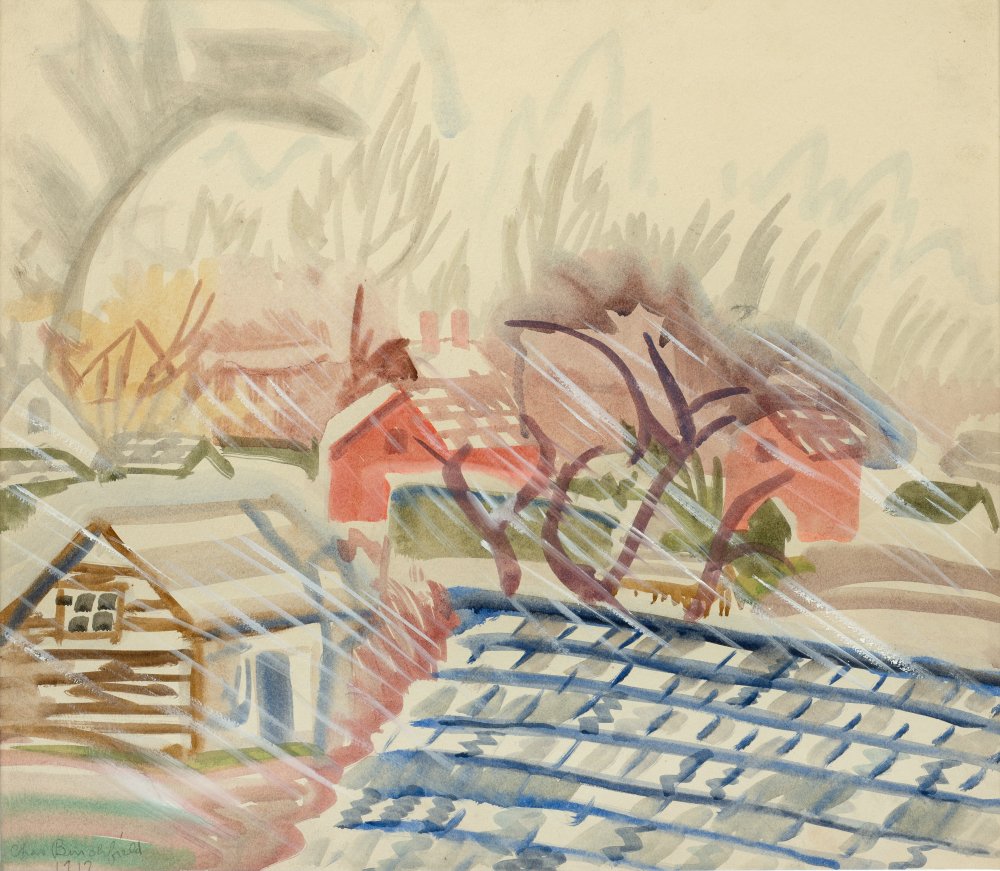 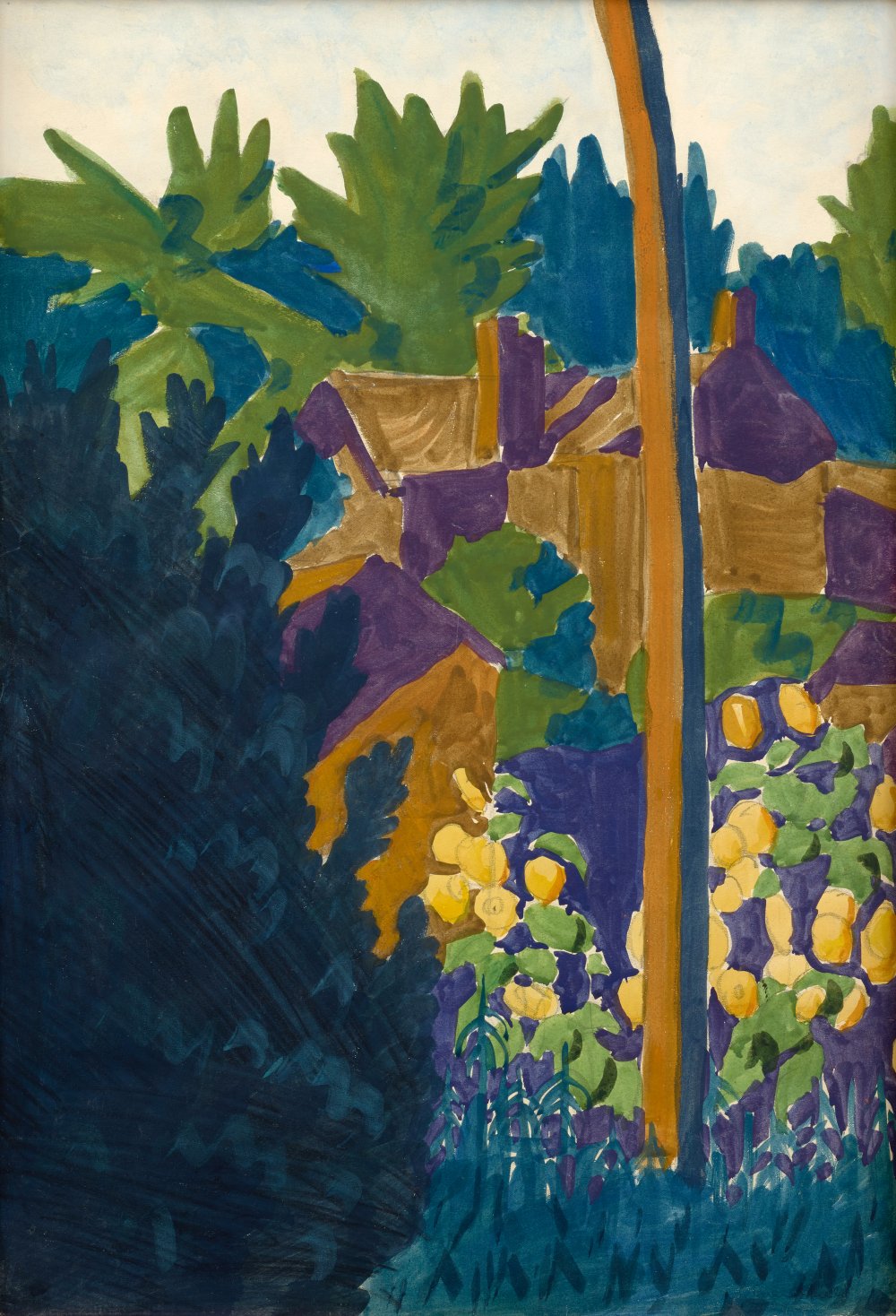 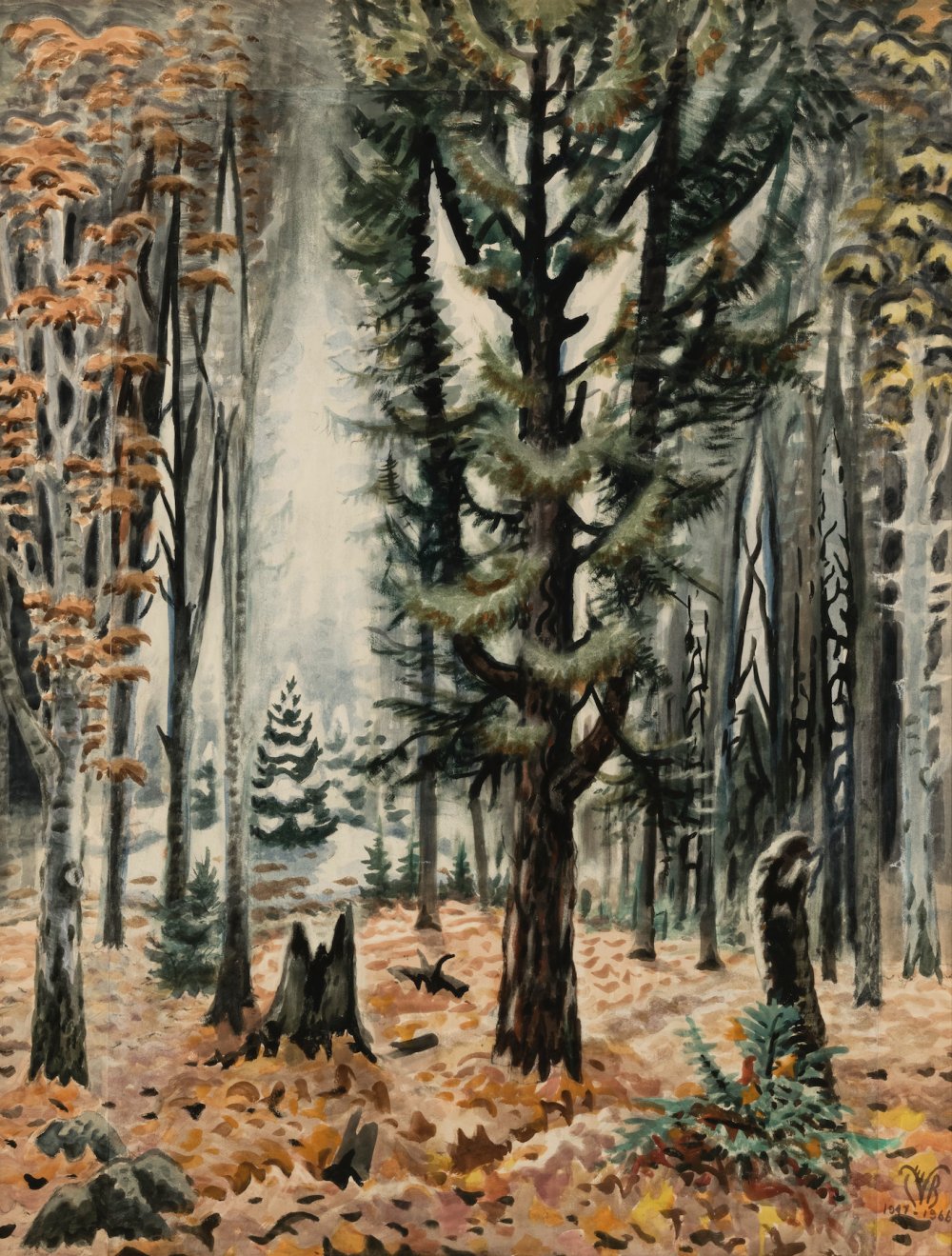 Watercolor and charcoal on joined paper mounted on board
42 x 32 1/2 inches
Signed with the artist's monogram and dated at lower right: CEB / 1947-1966 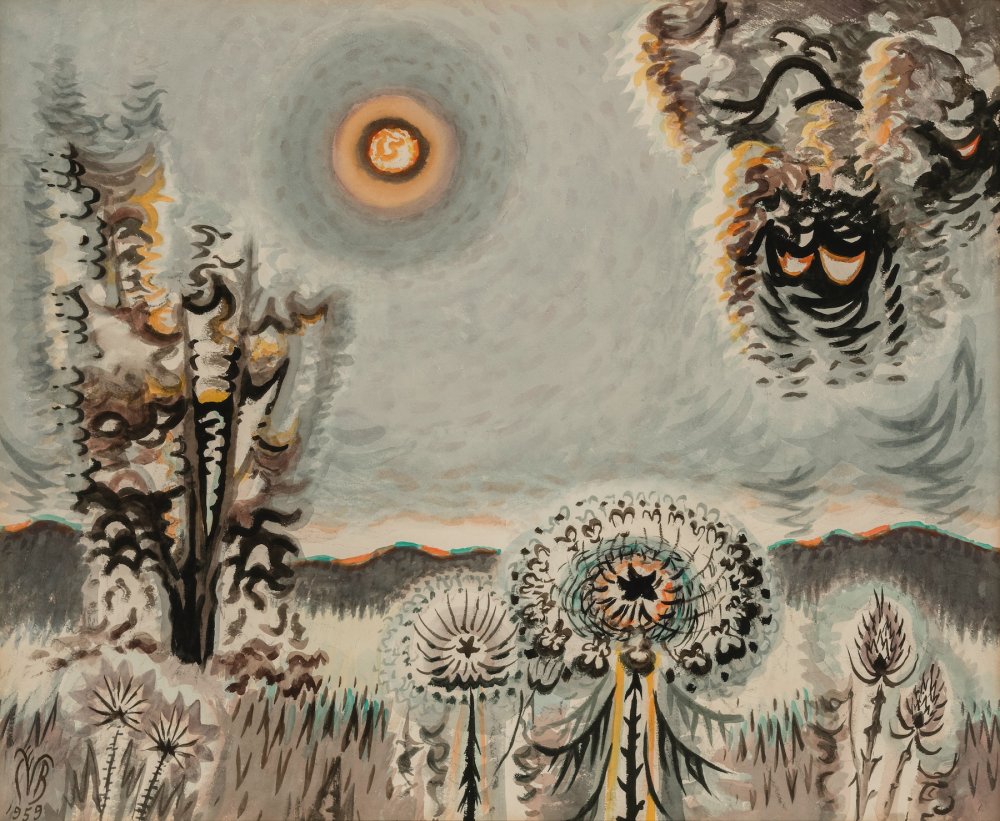 Watercolor on paper
33 x 40 inches
Signed with the artist's monogram and dated at lower left: CEB / 1959 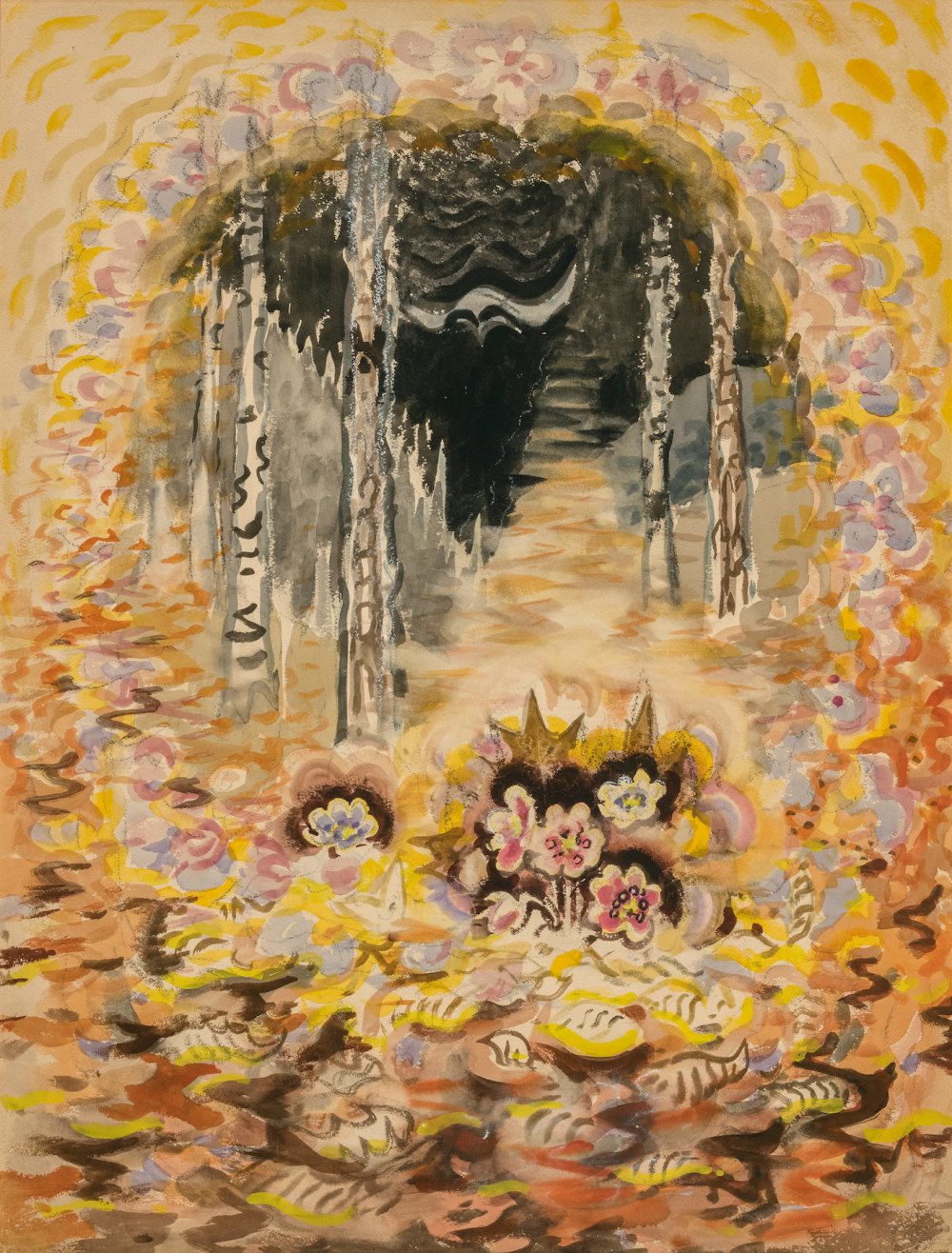 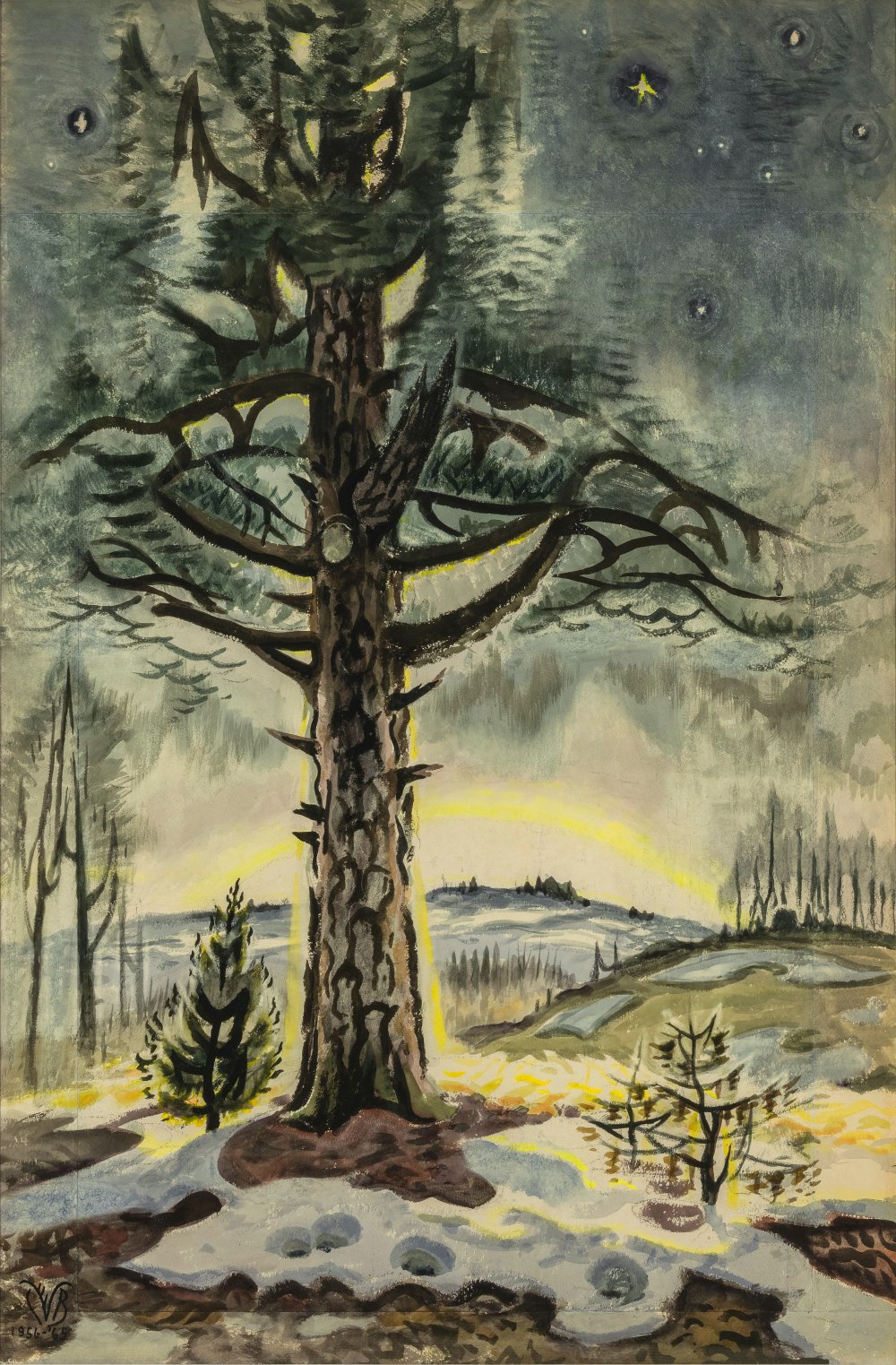 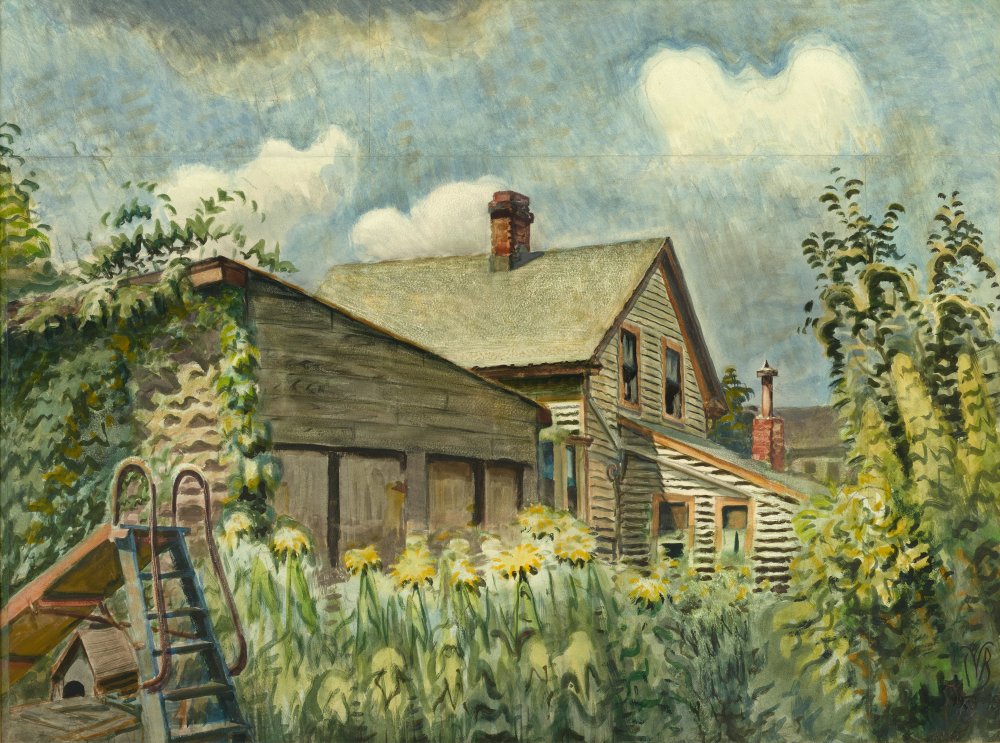 The astonishing body of work Charles E. Burchfield produced in 1917 is comprised of 400 watercolors and numerous pencil drawings. The works signify one of the most explosively creative and innovative periods in the history of American watercolor and modern art. Charles E. Burchfield referred to fruits born of this fertile moment as his “Golden Year” and he repeatedly sipped from this deep reservoir to produce magical watercolor paintings, including a later passage of giant watercolors uniting various sheets of paper, bringing the intimacy and relevance of his earlier work to a grander scale in a post-war world.

Charles E. Burchfield’s watercolors are revered for their sense of spontaneity, brilliant color, and a throbbing internal energy. The 1917 works were fundamental to Burchfield’s continued renewal for the next five decades. They also helped the artist to create a vocabulary of abstract thoughts which provided him the “conventions” to develop a sustained independent voice for nearly a half-century more. Charles E. Burchfield: Inexhaustible celebrates the artist’s unique place in American modernism; his profound independence and relentless pursuit of a unique art and clarion voice.

Charles E. Burchfield has enjoyed a repeated sense of renewal, most notably in the late 1940s when he broke free of the creative blocks of the Great Depression and World War II, which led to the Whitney Museum of American Art’s triumphant retrospective exhibition of 1955, a six-venue exhibition that delighted audiences and critics across the nation.

There is something eerie and jarring about Burchfield’s most complicated and successful compositions. A sense of Edgar Allen Poe’s prose and the unsettling dreams and spirits Burchfield saw in the houses, landscape, and natural phenomena around him. Burchfield communed daily with nature and saw rich connections between the sun and the stars – even in the gently blowing winds of Western New York State on late September evenings. Burchfield worked tirelessly in the woods around his Ohio and Western New York homes and found in nature the sounds, spirits, and symbols to make sense of a rapidly shifting modern world. Butterflies, spiders, rain and wind feature prominently – the natural world was Burchfield’s studio. Human figures appear in the troubling times of the late 1920s and 1930s. With the unsettling times upon us today, we invite you to find solace in Burchfield’s wild and romantic paintings and in the lucidity and intellect of his written journals.

The exhibition includes “Hemlock in November,” the summation of his career, which is the large-scale watercolor just off the easel when Charles E. Burchfield suffered a deadly heart attack. It is the summation of the artist’s sense of wonder regarding upcoming transition. Burchfield scholar, Dr. Nancy Weekly offers a biographical and stylistic analysis of Burchfield’s life in a publication to accompany the exhibition.