Channa Horwtiz’s practice was defined by a deployment of self-imposed rules, experiments with numerical sequence and explorations of systems and line. The artist’s fourth exhibition with Lisson Gallery showcases a more playful side of her rigorous practice and features a selection of drawings in ink, colored pencil, casein and gold leaf alongside rarely-shown, large-scale acrylic on canvas paintings. 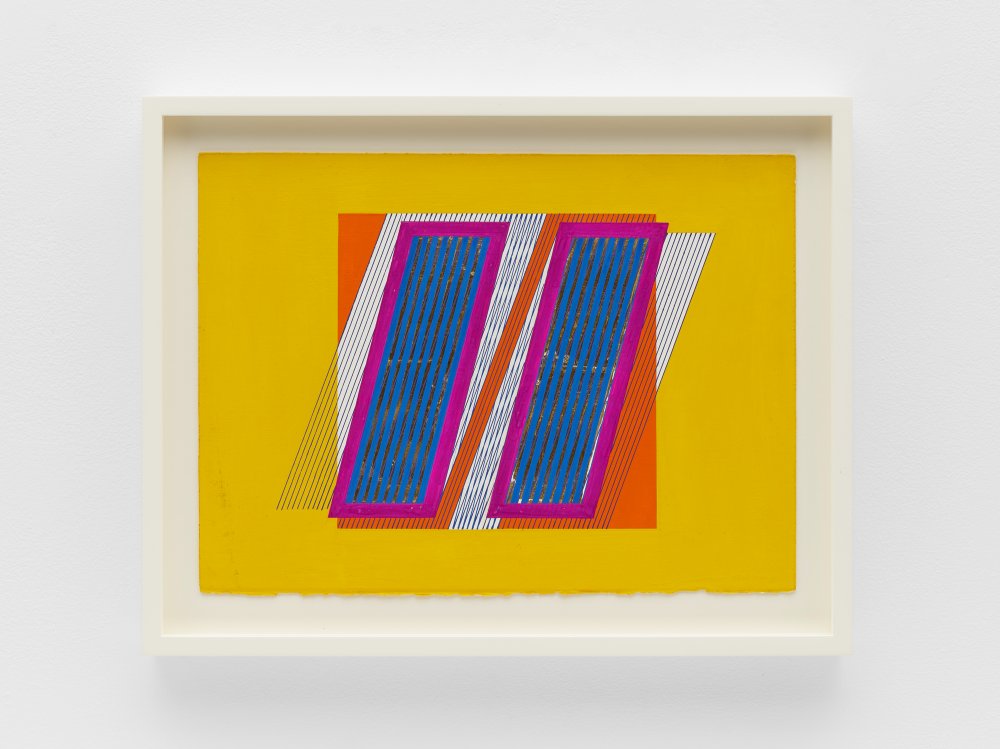 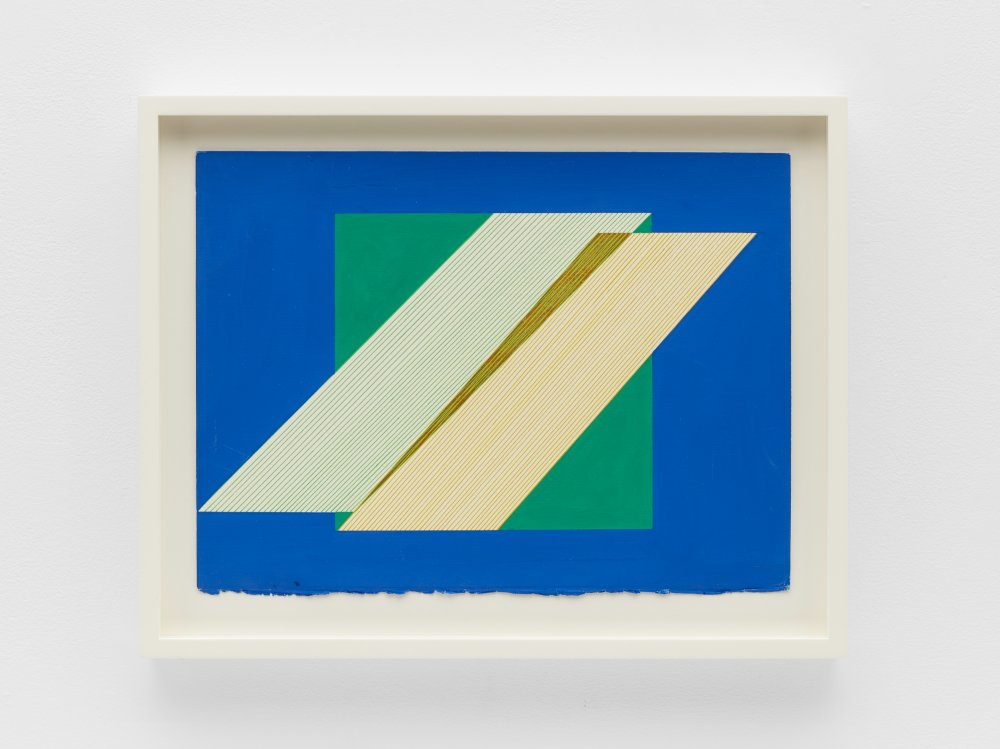 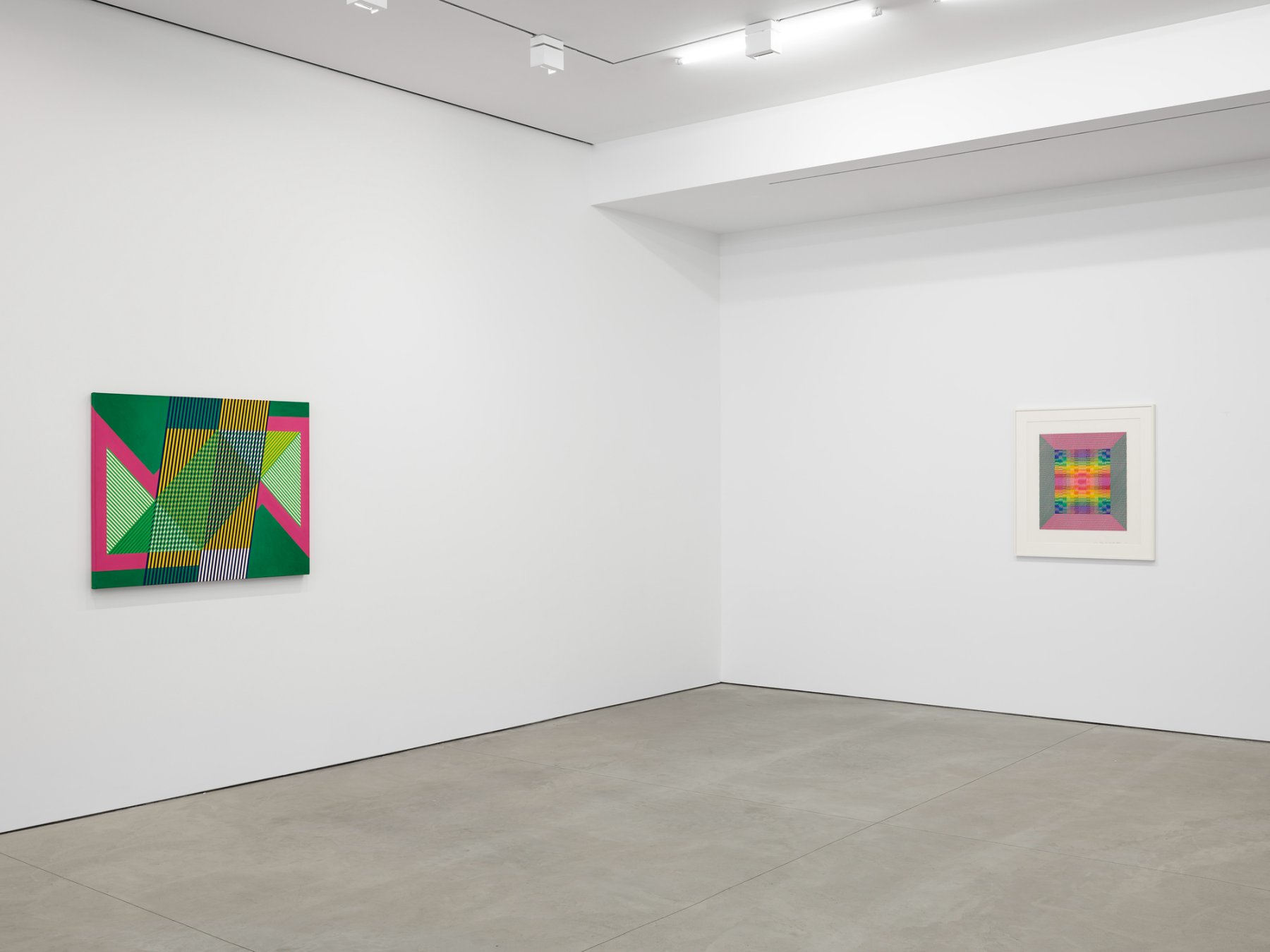 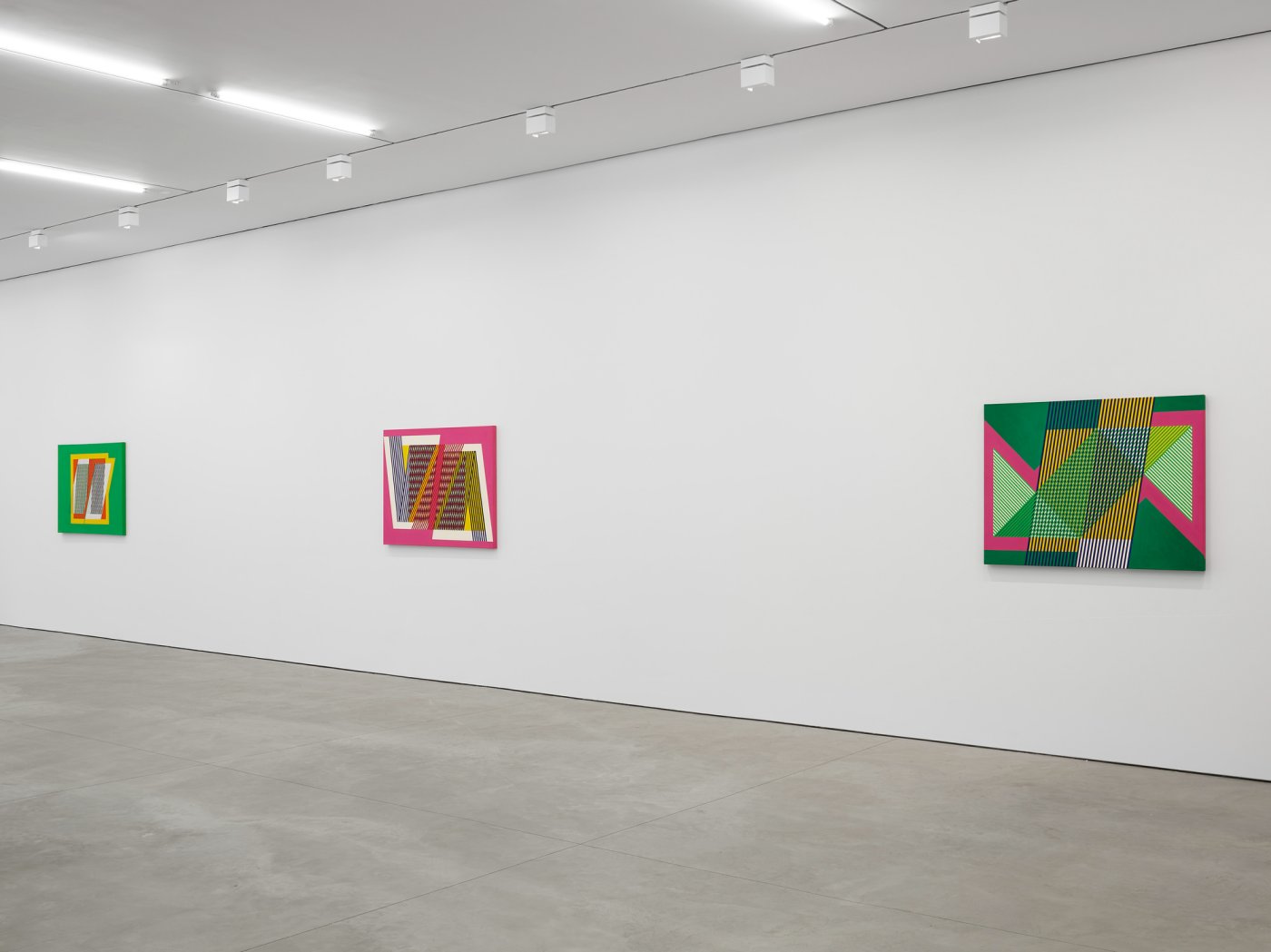 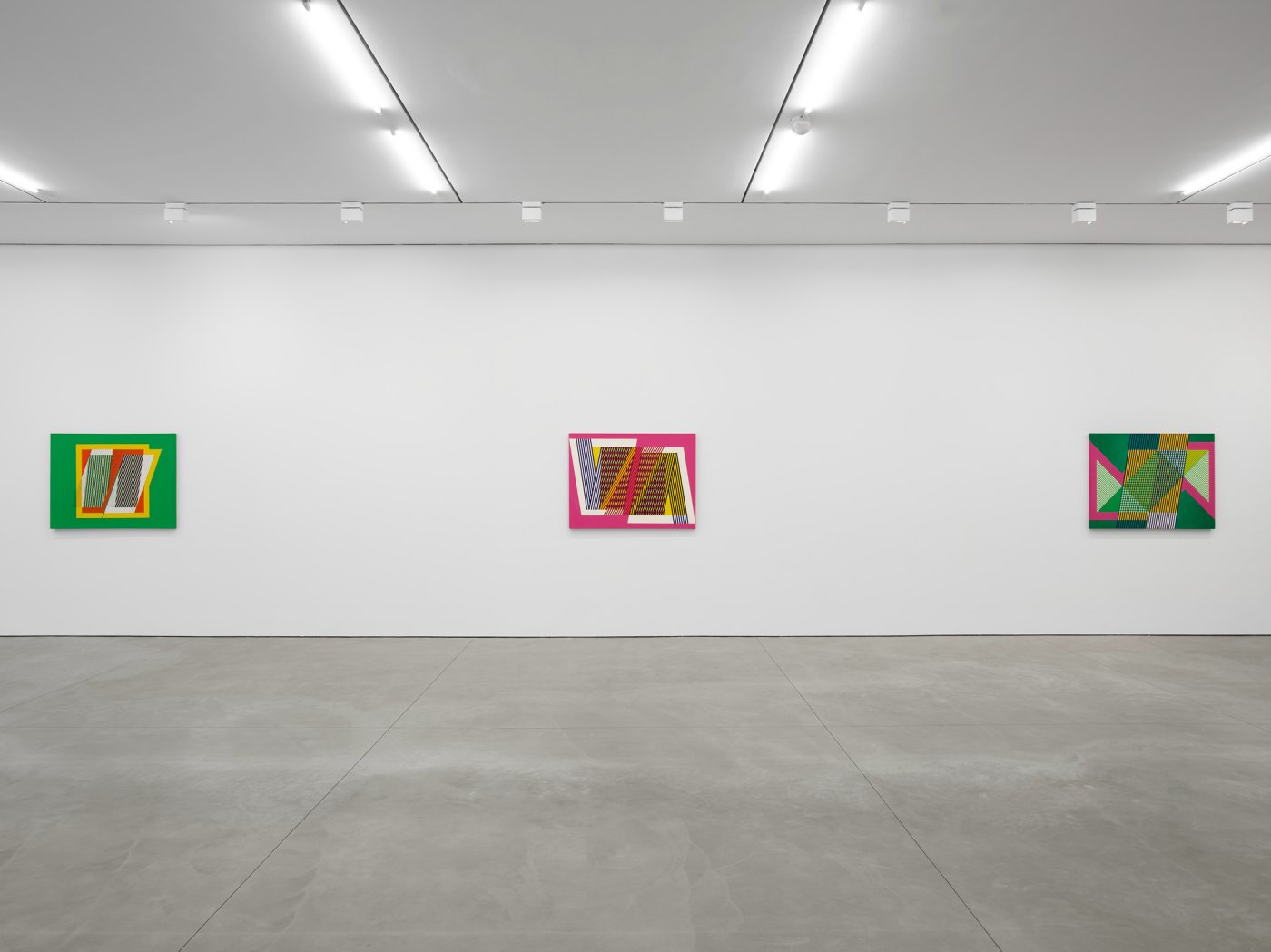 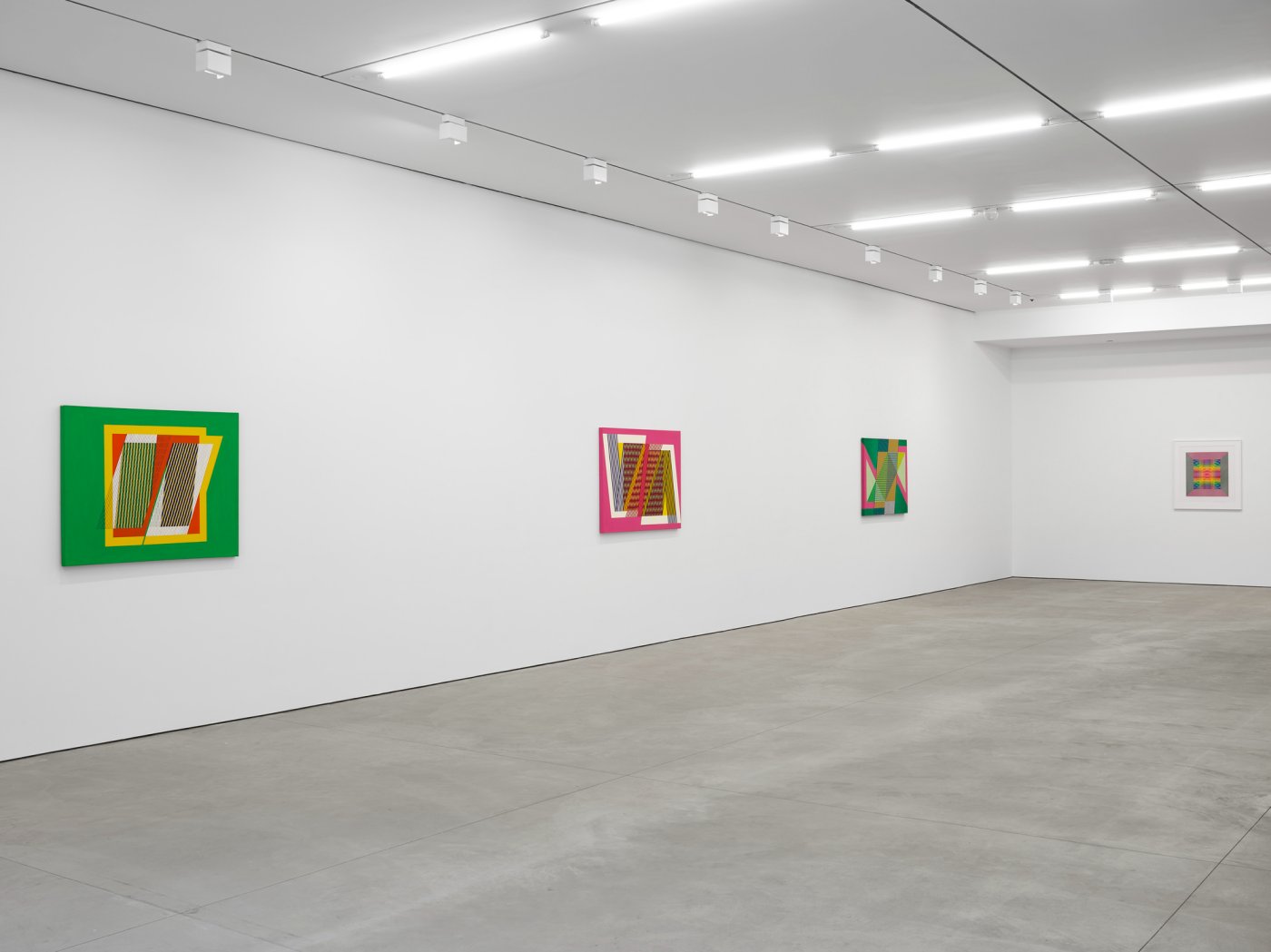 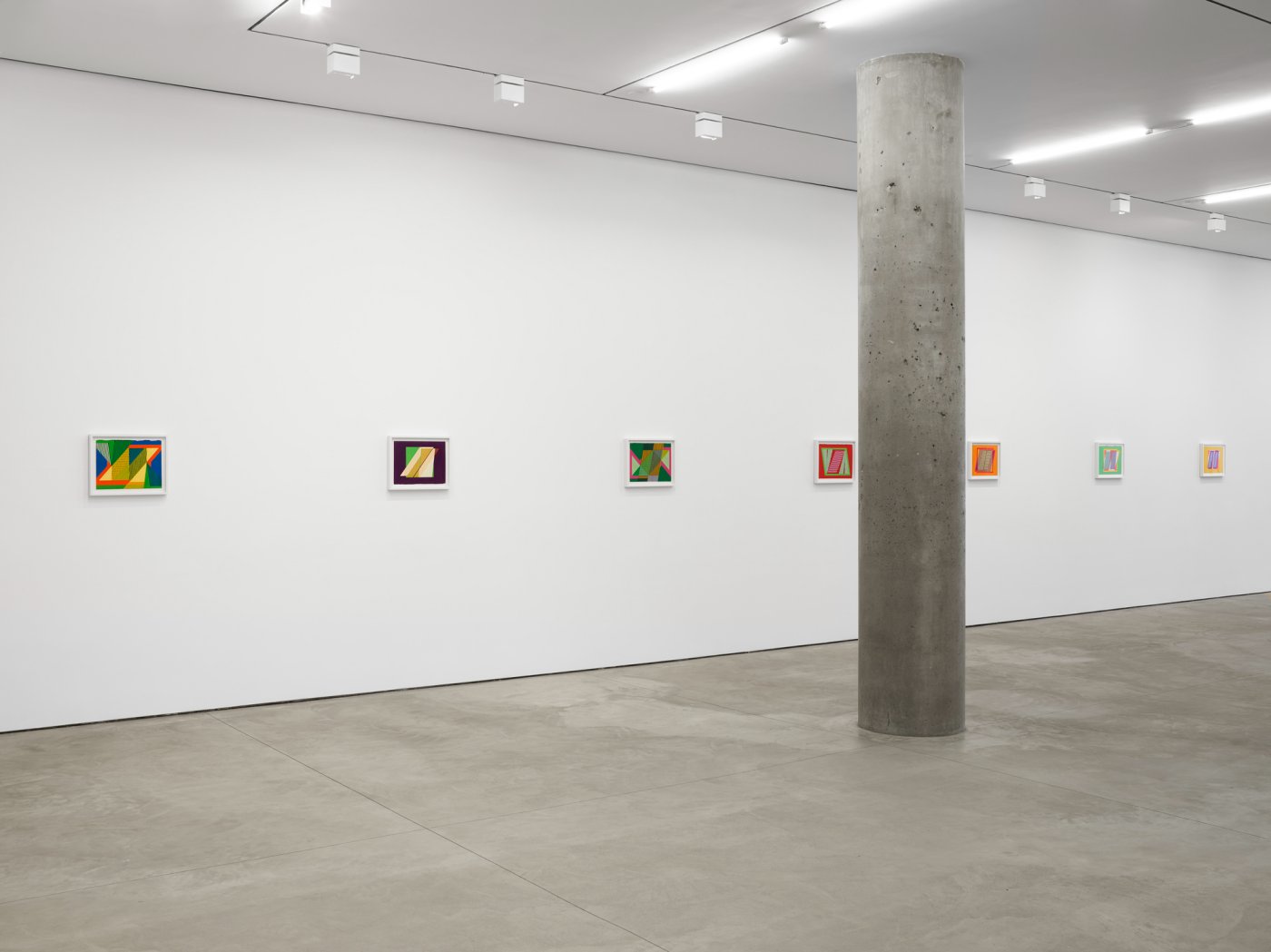 Working in obscurity for the majority of her fifty-year career, Channa Horwitz maintained a resolute and distinctive schematic language that informed each body of work and the deep inquiries from which they developed. The exhibition focuses on works from 1984 – 2004, a period when the artist created from an already-ingrained set of parameters determined in the twenty years prior. Horwitz’s first artistic inquiry, Language Series, set the foundations of her guiding principles. The series introduced repetitive patterns and numerical groupings that were organized sequentially based on combinations of eight pictograms. In the Sonakinatography works, which followed in the late 1960s, the artist used her mathematic compositions to explore ways to track movement and time within her visual philosophy. Throughout Horwitz’s career, each new body of work evolved from the previous series. The resulting interrelated explorations in the years to follow yielded the Variations and Inversion on a Rhythm, Flowings, Structures, Eight Expanded and Canon series previously exhibited at Lisson Gallery London, and the Canon Moiré and Rhythm of Lines ll series that are the subject of this presentation.

The Canon and Moiré works in the exhibition, which share a common methodology and use of systems, exhibit a clear lineage to Horwitz’s first series. Around 1984 she realized that all of her work came down to eight angles of lines. Her subsequent exploration with varied dyadic combinations from her vocabulary of eight angles resulted in the “Moirés” body of work. This led to works that balanced a new relationship between a restraining methodology and a densely patterned and vibrant surface, such as Canon Twelve, Moiré Number 2 (1985) and Moiré Matrix (1985). In these works, eight different starting points on individual angles are assigned a specific color, a system similar to the processes in Sonakinatography. New rhythmic patterns are created at every intersection creating colorful vibrations across the surface.

The Moiré pieces included in the presentation also provide a clear line forward to the Rhythm of Line II series of the 1990s. In these works, lines and squares are used to plot intersecting angles creating new patterns, colors and shapes, such as in the 1992 “Moiré on Yellow” and ‘Moiré on purple with 1 & 6”. The works evolve further as the viewer moves through the exhibition where more complex compositions with bold color and heretofore uncharacteristically thicker lines are put on display. This culminates in the artist’s playfully complex visuals and expansive system as exemplified by the 1993 “2-5 7-4” and the 1994 “2- 8 1-4”.

In an essay that accompanies the exhibition, Nigel Prince, Director at Artes Mundi, concludes: “It is this weaving together and cross referencing between series of works that is so characteristic of her practice during various moments throughout her career. As such it sits in distinction to the usual superficial consideration of reductive rigidity that artworks employing systems might be expected to follow as a predictable, neat or more straightforward linear development. And yet collectively successive and progressive series demonstrate that through Horwitz’ lifetime devotion to visually arresting and systematic, elaborate works, what is revealed is the freedom present through supposed constraint and the multiple levels of consciousness achieved through methodical and logical patterning”.

Born in Los Angeles, where she lived and worked for her entire life, Channa Horwitz (1932–2013) studied graphic design in the early 1950s at Art Center College of Design and Fine Art at Cal State Northridge in the early 1960s. In 1972 she received a BFA from the California Institute of the Arts in Valencia, California. There she studied with more well-known peers John Baldessari and Allan Kaprow, participating in some of Kaprow’s notorious ‘Happenings’ and creating her own. Now regarded as an important proponent of Conceptual Art and West Coast Minimalism alongside Mary Corse, John McCracken and others, Horwitz only received art world endorsement much later in life, when she was included in the Whitney Biennial (2014) and the Venice Biennale (2013) in the year of her death, aged 80.

Most recently Horwitz was exhibited in solo exhibitions at the Museo de Arte Contemporáneo de Castilla y León, León (2019), and the Contemporary Art Gallery, Vancouver (2018). Her work was included in “Thinking Machines: Art and Design in the Computer Age, 1959-1989”, at The Museum of Modern Art, New York (2018), and in 2016, The Museum of Modern Art, New York organized a solo presentation of acquired works, as part of the museum’s ongoing series titled “Inbox”. Prior to this, Horwitz’s work was the subject of solo exhibitions at Raven Row, London, UK (2016); Kunst-Werke Institute for Contemporary art, Berlin, Germany (2015); Brandenburgischer Kunstverein, Potsdam, Germany (2009); among others. Her work has been included in major group exhibitions at Kunsthalle Wien, Vienna, Austria (2016); Itaú Cultural, São Paulo, Brazil (2015); Museum Tinguely, Basel, Switzerland (2015); Los Angeles County Museum of Art, CA, USA (2015); 2014 Whitney Biennial, Whitney Museum of American Art, New York, USA (2014); the 55th Venice Biennale (2013); Kunsthalle Düsseldorf, Germany (2013); Hammer Museum of Art, Los Angeles, CA (2012); Kunsthaus Dresden, Germany (2012); among others. Her work is included in the collections of the Museum of Modern Art, New York, USA; Hammer Museum of Art, Los Angeles, CA, USA; Getty Research Institute, Los Angeles, CA; Los Angeles County Museum of Art, CA; and the National Gallery of Art, Washington, D.C.; among others. Horwitz received an Artist Fellowship from the National Endowment for the Arts in 1978, and was awarded a prestigious Guggenheim Fellowship Grant in 2013, just before her death at the age of eighty.