Gladstone Gallery presents an exhibition of works by Stockholm-based artist Cecilia Edefalk from her series of botanical drawings from the late 1970s, alongside a series of short films. 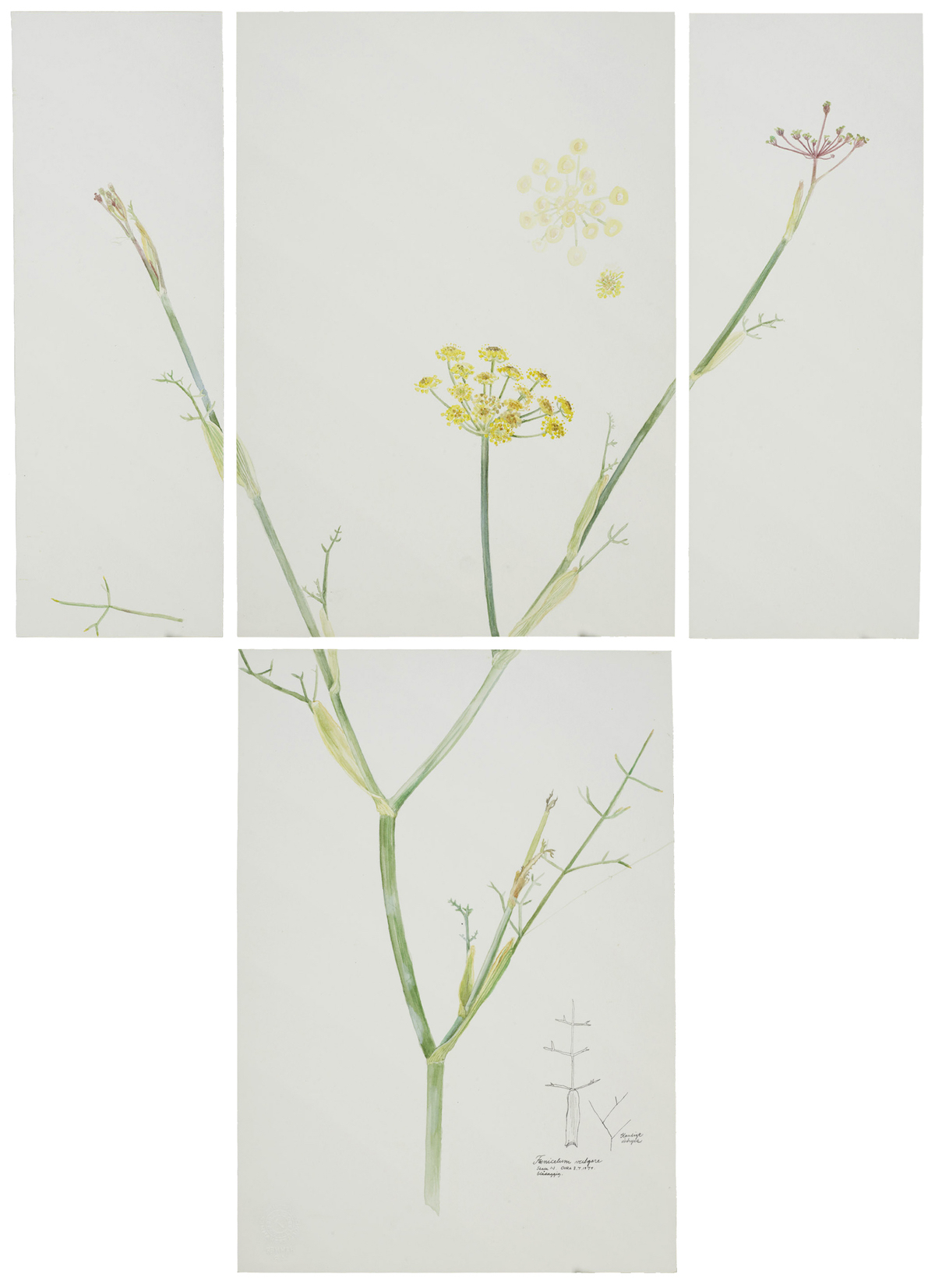 This expansive body of works on paper and film, which has only been shown in full at Nordiska Akvarellmuseet, Skärhamn, alongside watercolors by Hilma af Klint, meticulously document the native plants of beaches and other natural sites along the coastline of Europe from a series of significant road trips the artist took. Minimal yet layered, informative but abstract, these methodical compositions form a bridge between the artist’s ethereal, conceptual practice and the physical world from which many of her ideas are borne.

Edefalk has distinguished herself as a pioneering artist who continually takes inspiration from history, memory, and experience, transforming these modalities into deeply spiritual works that connect to nature, light, and her imagination. Through the artist’s chosen mediums, namely drawing, painting, sculpture, and film, Edefalk forms visual representations of complex, indescribable, or everyday phenomena through the materials she molds and projects.

For the series of watercolors and drawings, the artist uses the framework of a years-long road trip to places such as Spain, Portugal, Italy, especially Sicily including Lampedusa, Wales and different locations in Sweden while living in Germany. Working in collaboration with the botanist Anders Tehler, these works carefully catalogs the specimens, attributes, and colors of each plant she encounters growing by the shores and seashores of Europe with the exacting research of a scientist or anthropologist. Delicate blossoming flowers, sturdy grasses, sometimes small insects that are “visiting” the watercolor paper during the work and textured leaves are documented with both rigorous attention to detail and artistic expressiveness in how forms overlap and the subtle watercolors are applied to each surface. The artist’s interest in durational work is ever present and particularly significant with this series: often working on a series for years or decades, Edefalk demonstrates determination in her commitment to a project, as well as an embrasure of the inevitable fluidity in the process. Like a biologist, Edefalk’s hypothesis and conclusions are all part of her investigations into an idea. The tangible artifacts she leaves behind from these various excursions offer a wondrous and curious suite of carefully executed memories of the history of the earth and personal journey.

Accompanying the suite of drawings, Edefalk also includes two films in the exhibition. The first film is a digital composition sourced from diapositive slide photographs the artist took while on her travels as a way of further cataloging the sites and times of her journeys and discoveries.

Sites that may not longer. This documentary-style film offers another portal through which the artist studies the world around her work. This work also adds another layer to the durational quality of her practice through this long-form portrayal of how she memorializes her experiences and research. The second film depicts a woman whistling in call and response with the birds. Through both the works on paper and films, this installation demonstrates the multifacetedness of her expansive approach to art and image making, appreciation for the

inherent structure of forms and ideas, and a lifelong appreciation for experiencing and connecting to nature.

Cecilia Edefalk was born in Norrköping and currently lives and works in Stockholm, Sweden. In 2020, her work was the subject of a major retrospective at Norrköping Museum of Art and in 2016 at Prins Eugens Waldmarsudde, Stockholm. She has had significant museum exhibitions around the world at institutions such as Moderna Museet, Stockholm; BAMPFA, Berkeley Art Museum; Crystal Palace, Stockholm; Parasol unit, London; The Art Institute of Chicago; MalmöKonstmuseum; Lunds Konsthall, Sweden, Nordiska Akvarellmuseet, Sweden; Kunsthalle Kiel, Germany; and Kunsthalle Bern. Her work has appeared in group shows, including Aargauer Kunsthaus, Aarau; Moderna Museet, Malmö; Documenta 11, Kassel; the 22nd São Paolo Biennial; the Whitney Museum of American Art, New York; Wadsworth Atheneum Museum of Art, Hartford; Museum für Moderne Kunst, Frankfurt; CCA Wattis Institute for Contemporary Art, San Francisco; and Musée d’art moderne de la Ville de Paris, Paris. Her work was the subject of a solo exhibition, “Heavens,” at Lund Cathedral, Lund, Sweden, on view from July 16 – August 21, 2022. She is currently working on a public art commission for the Swedish State at Rosenbad in Stockholm produced by Art Agency Sweden, to be unveiled later this year.