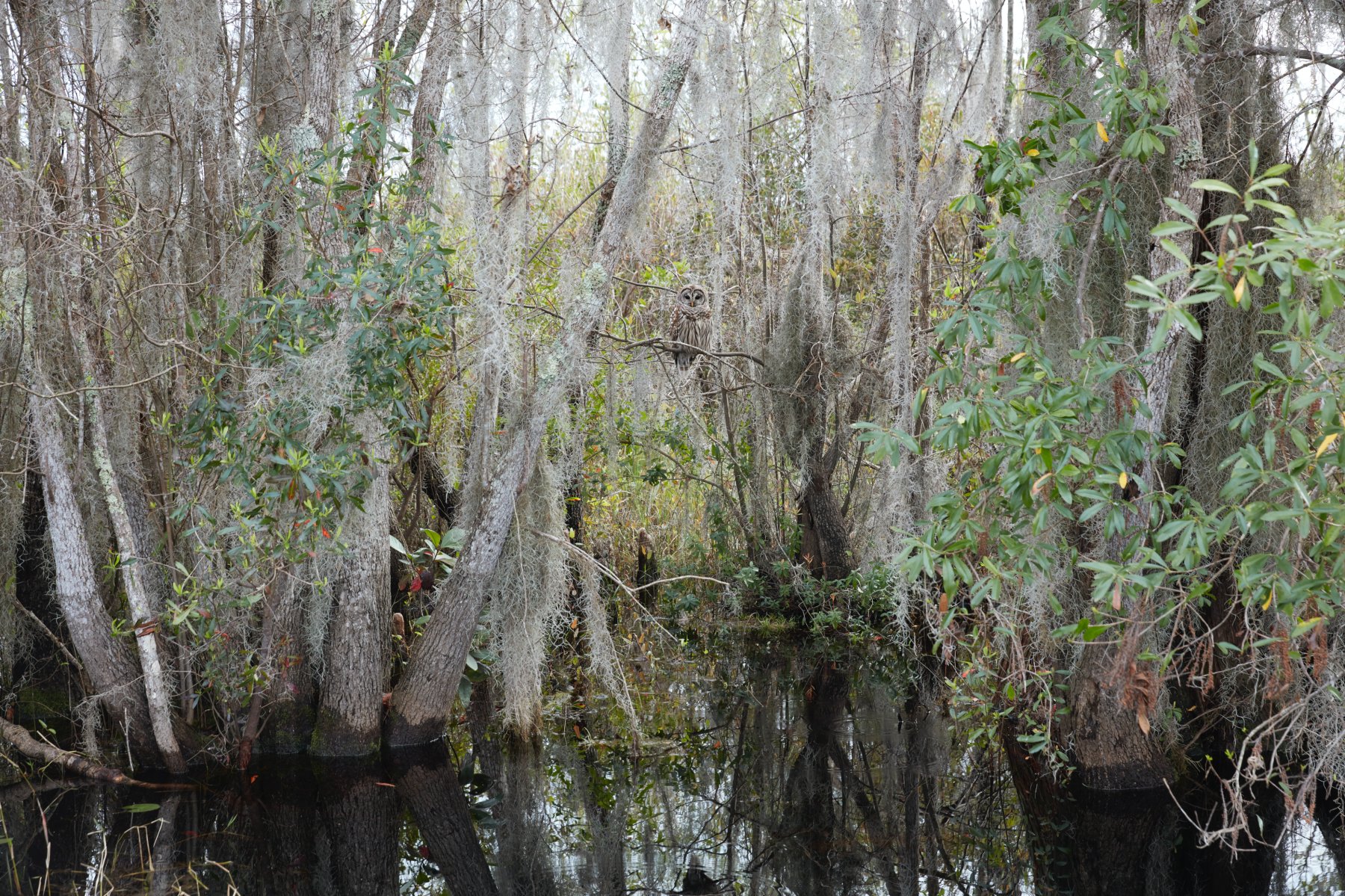 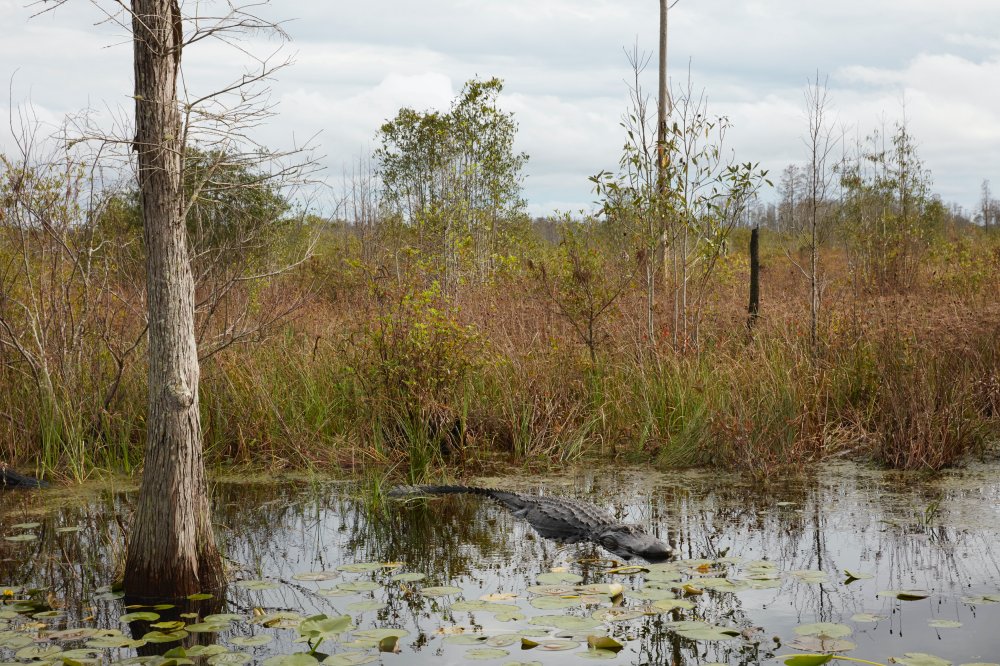 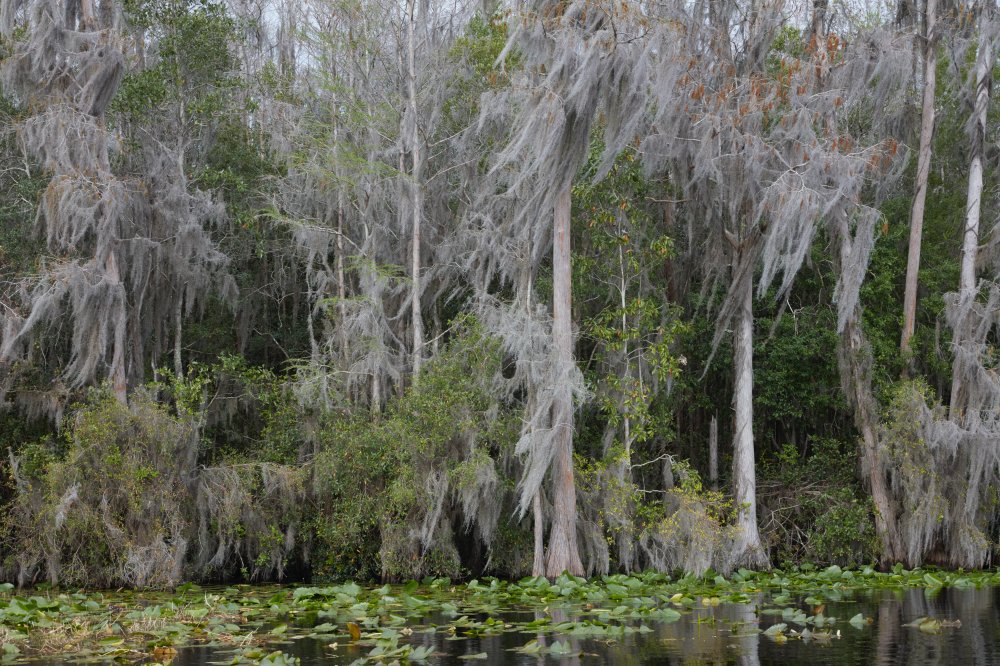 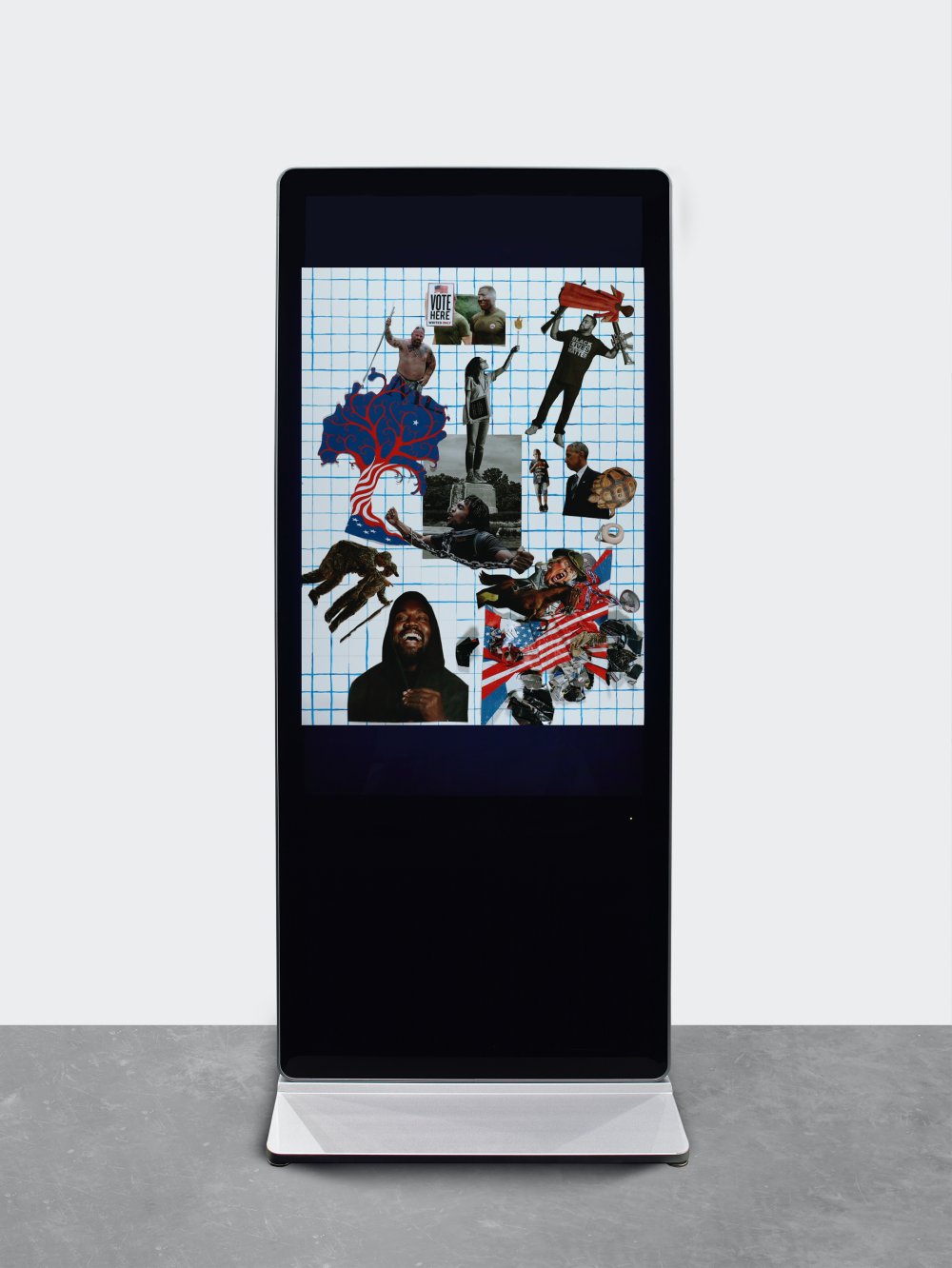 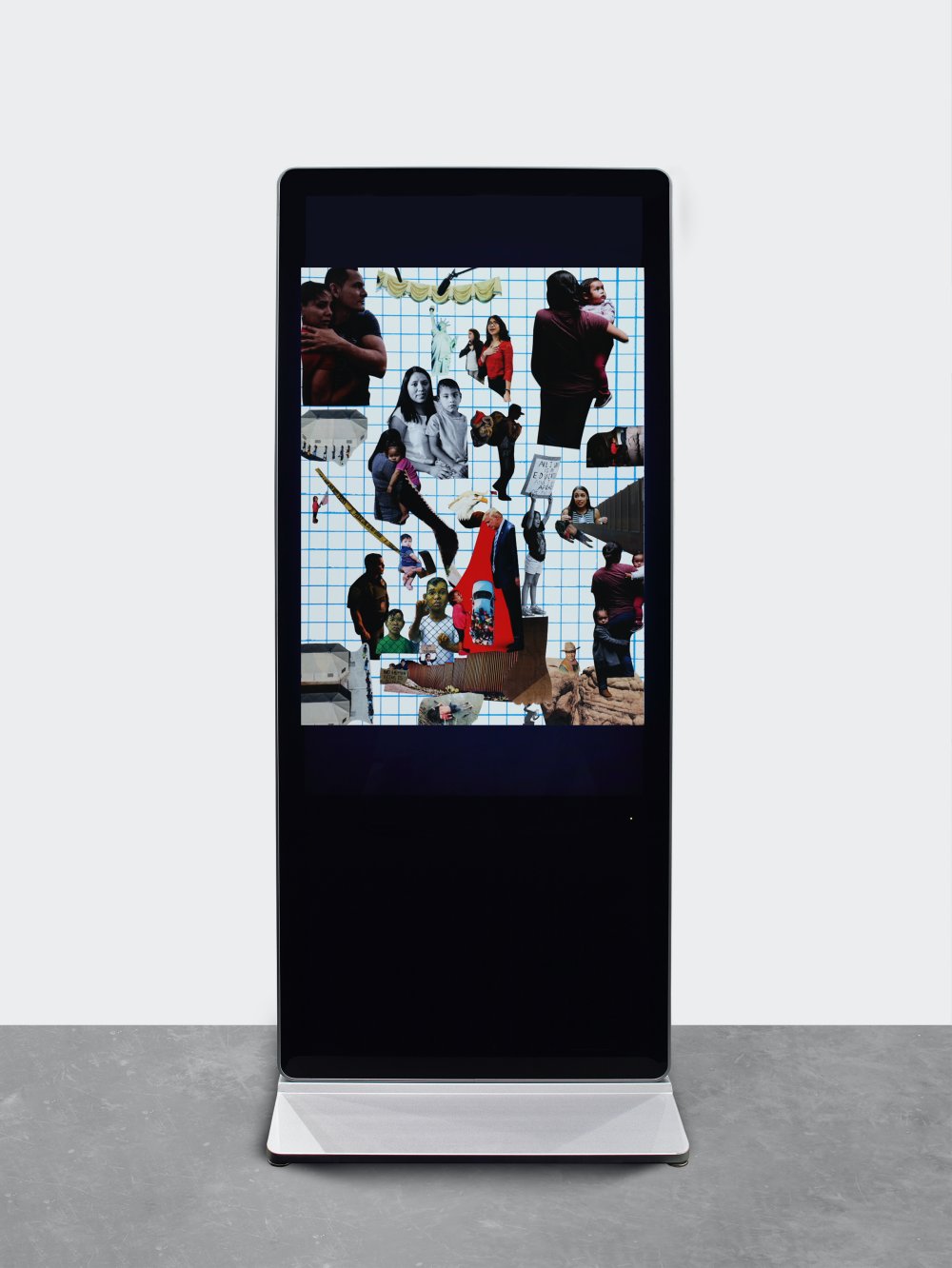 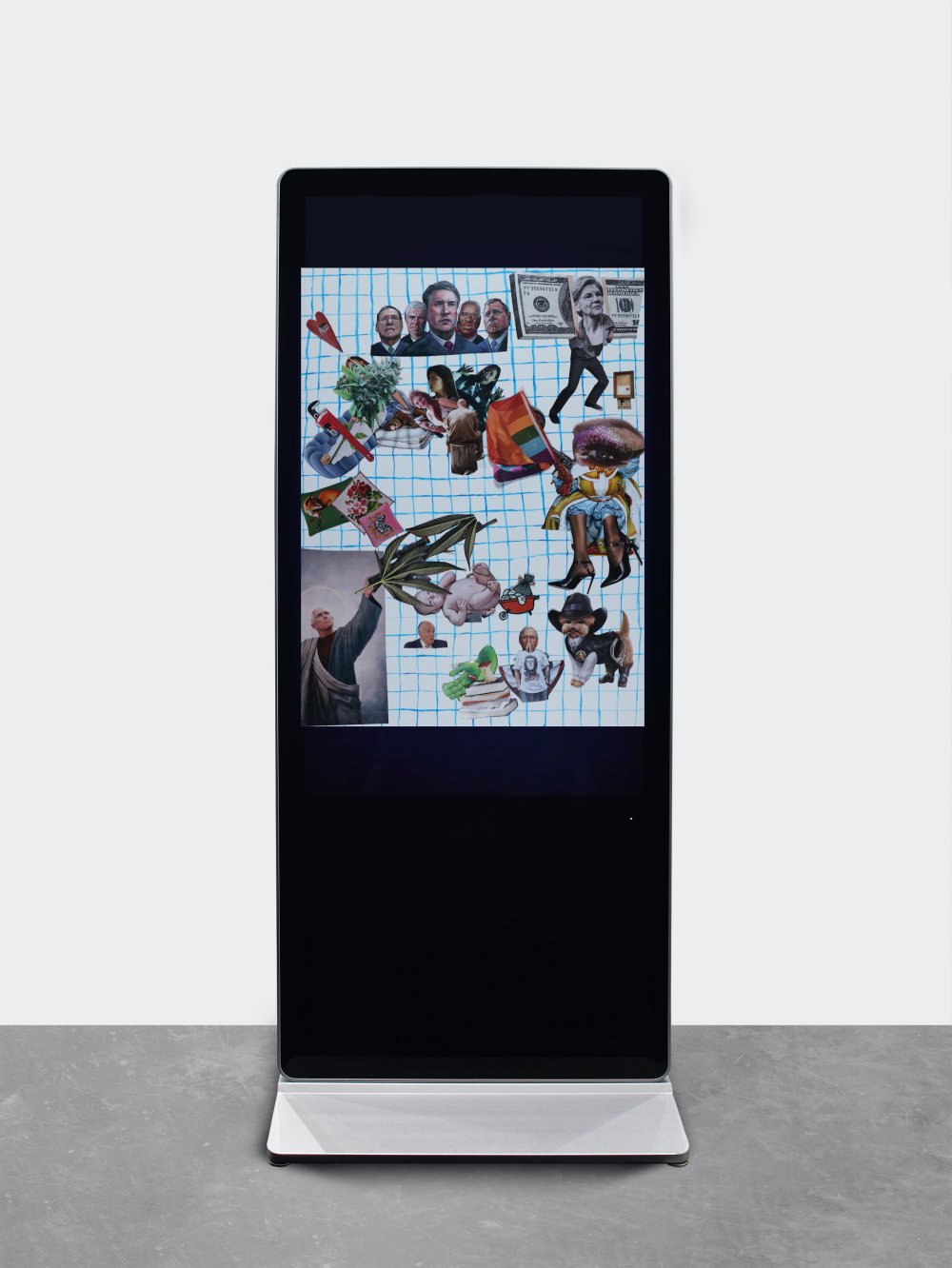 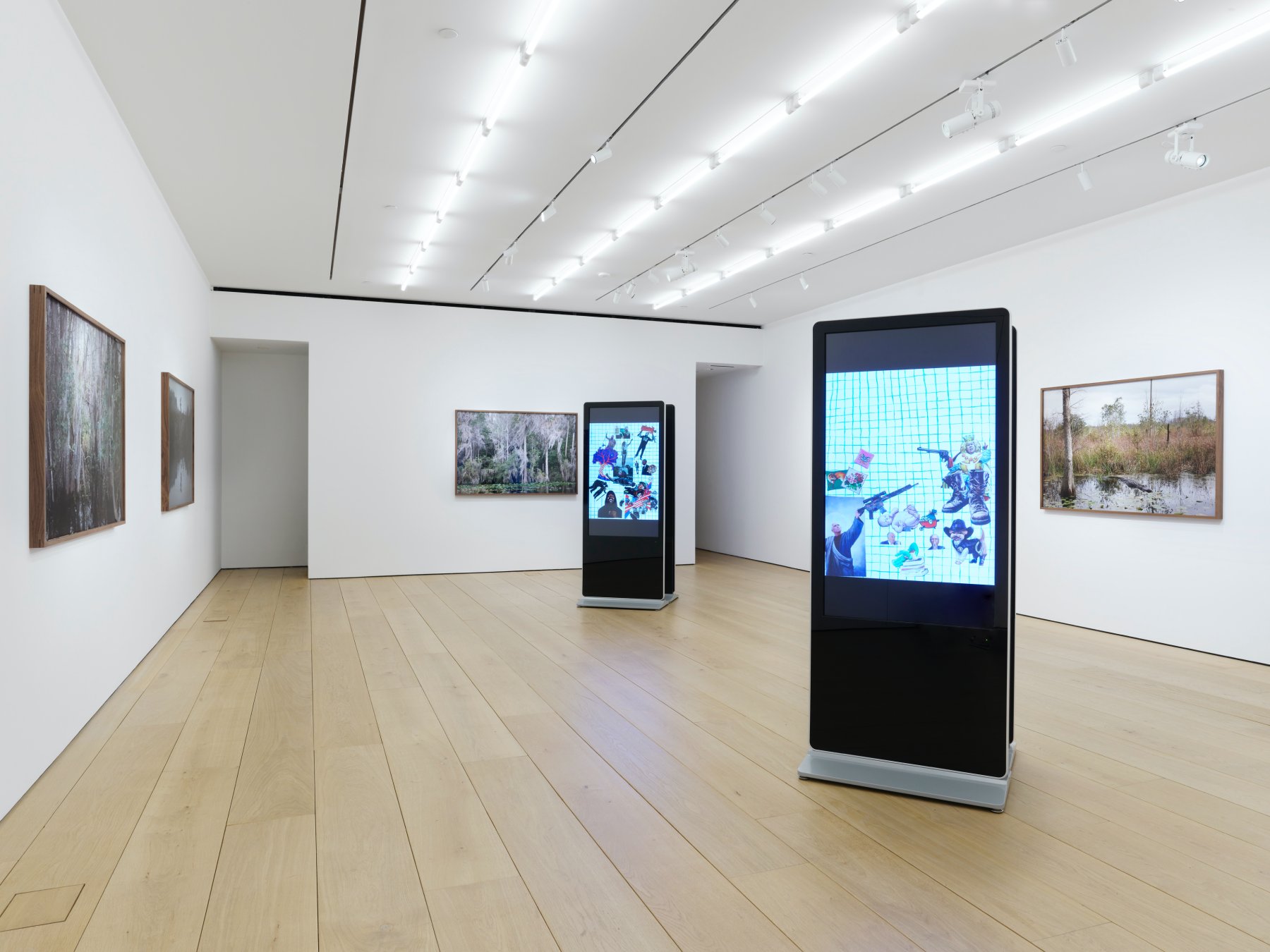 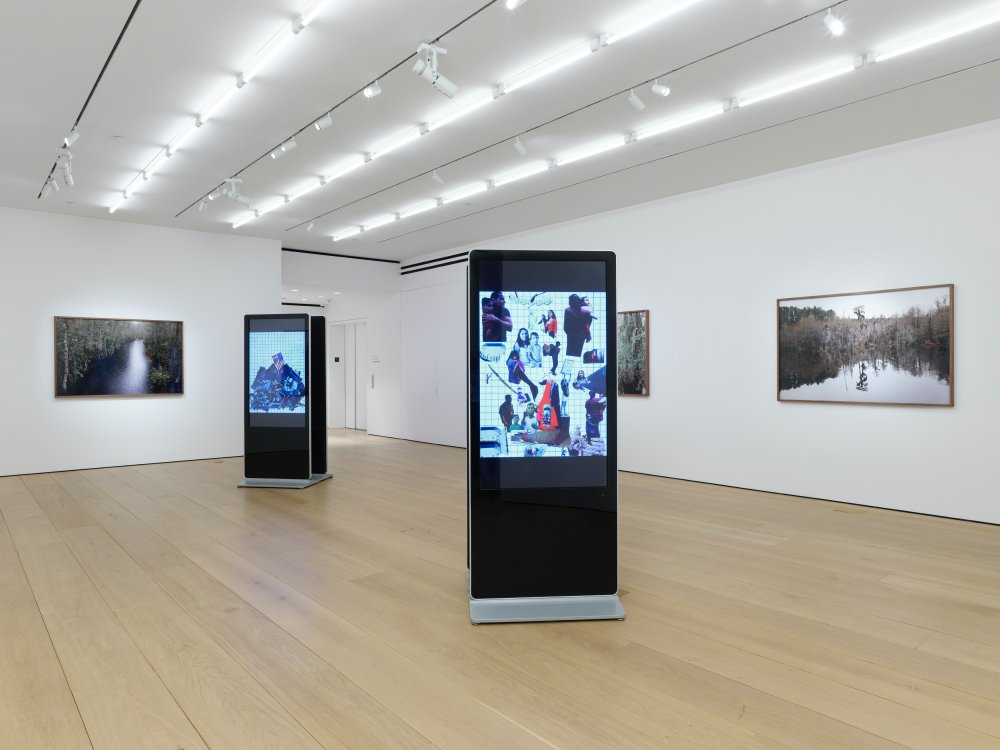 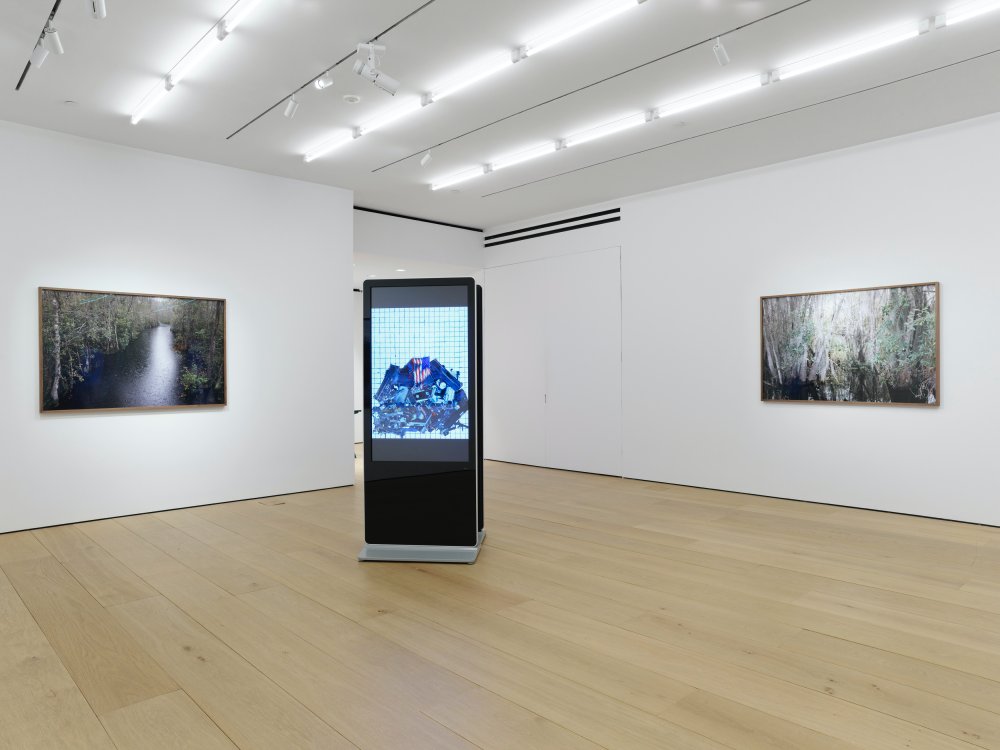 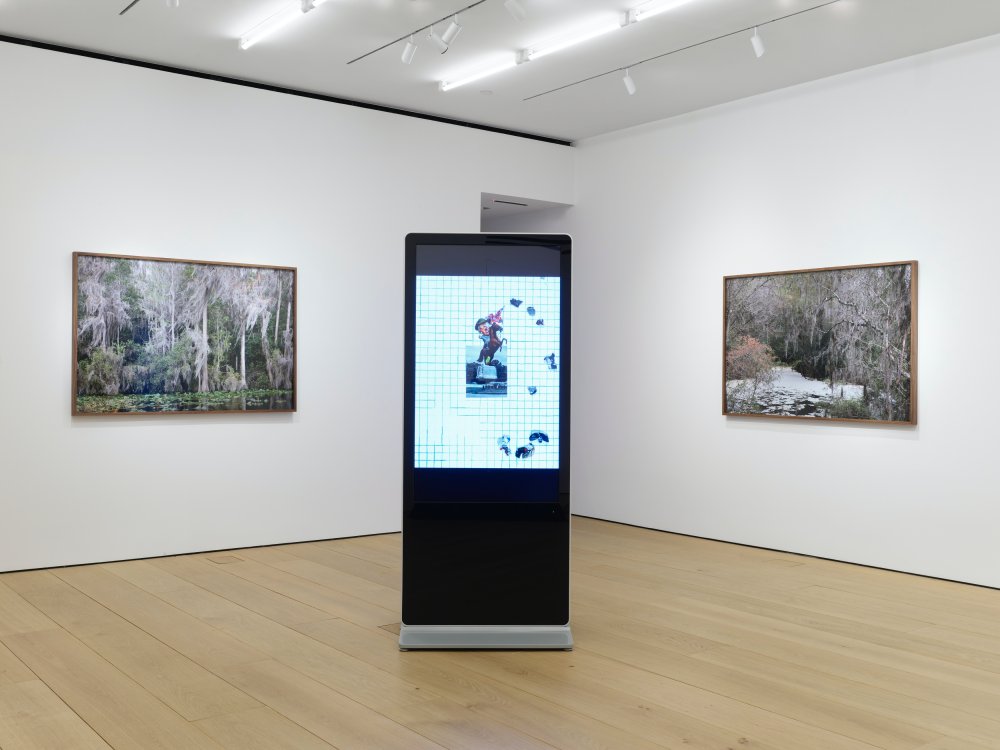 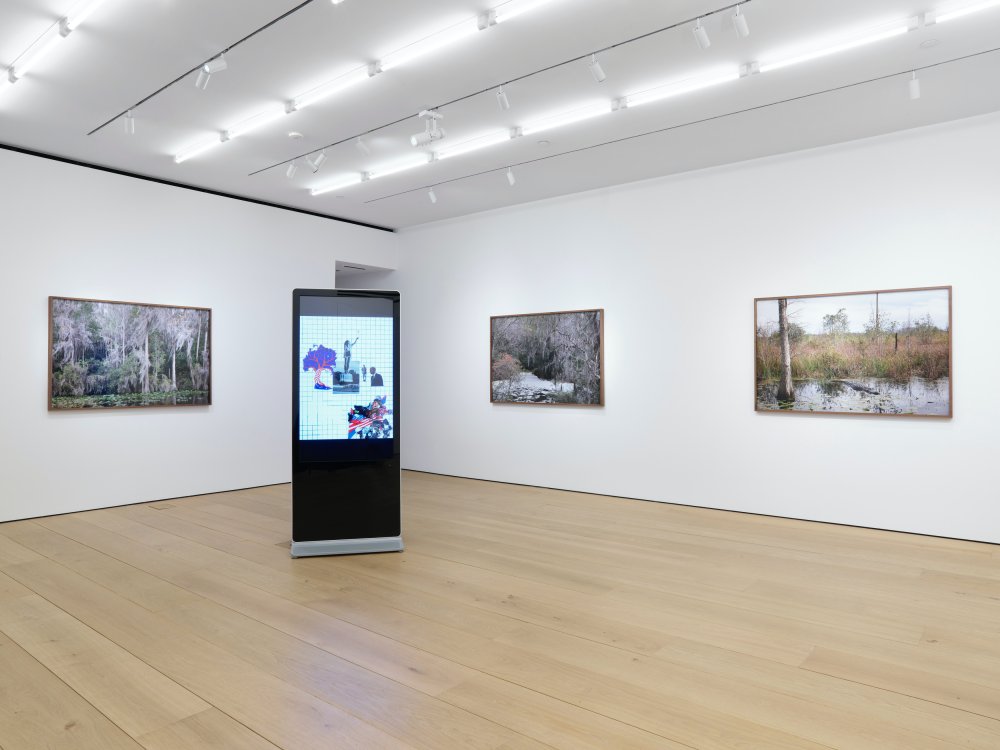 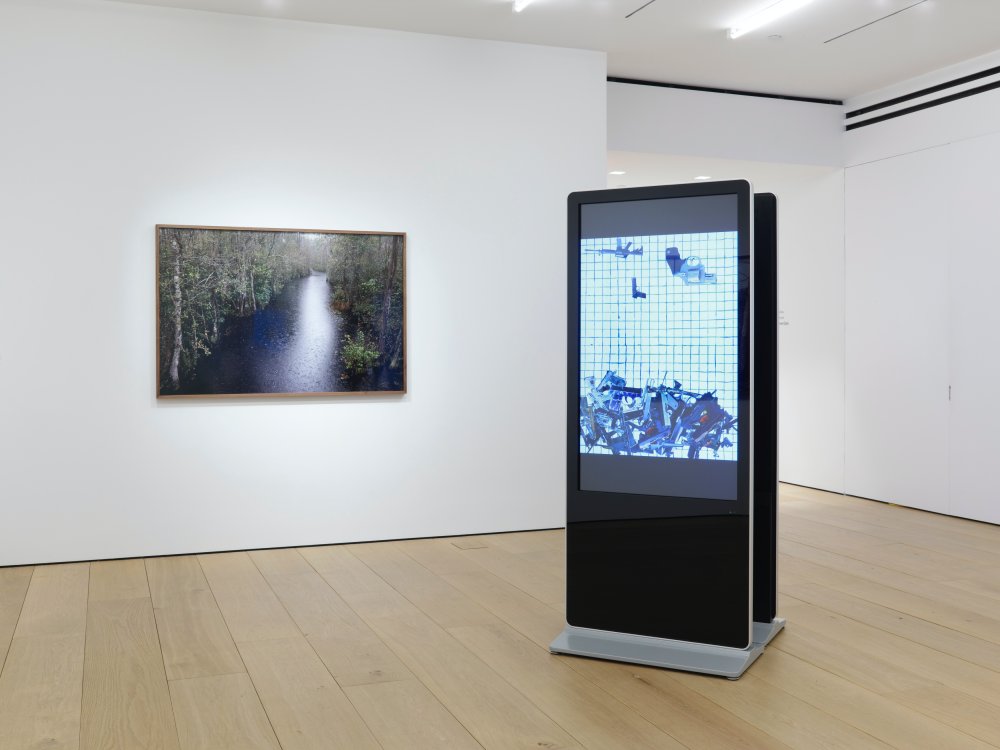 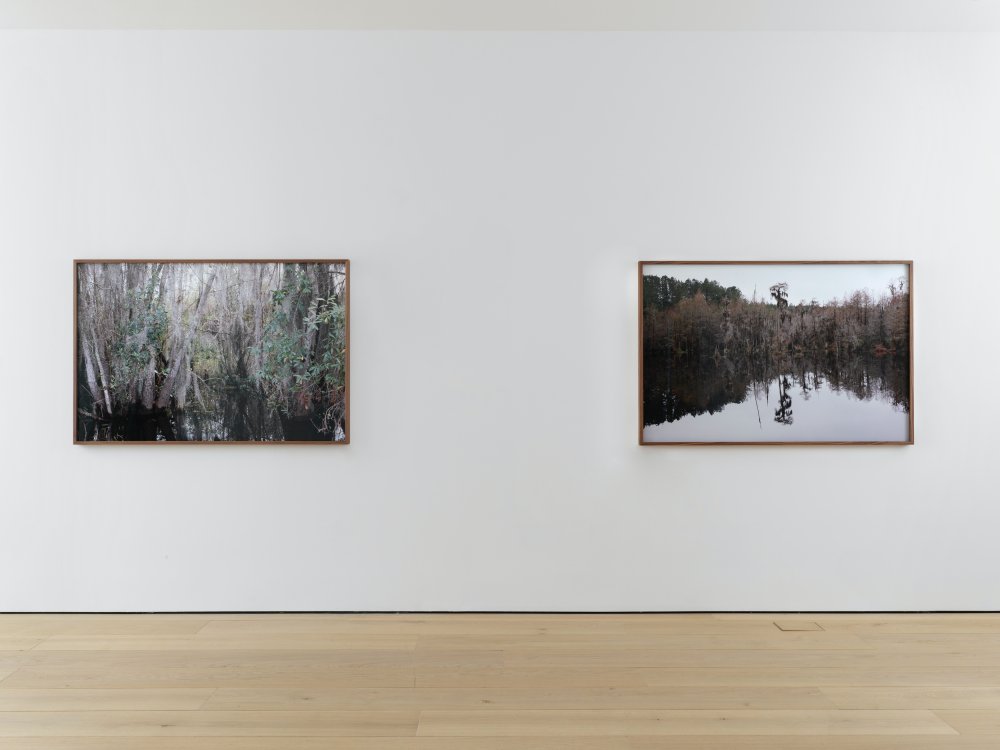 This exhibition, featuring large-scale photography and stop motion animations, examines our current climate, both political and ecological, through digital collages of magazine clippings and photographs of the Okefenokee swamp land. Taken together, these works create a portrait of contemporary America—plagued by the divisive and violent rhetoric used by our current administration and facing looming ecological destruction due to climate change, which is especially threatening for the wetlands Opie features here.

One of the most significant American photographers of her generation, Opie has produced over two decades of work that examines and often exposes the ideals and norms surrounding American identity and the concept of the “American Dream” while giving visibility to communities overlooked within those narratives. She first gained recognition during the 1990s for her series of studio portraits titled Being and Having, in which she photographed gay, lesbian, and transgender individuals drawn from her circle of friends and artists. Opie has also traveled extensively across the country exploring the diversity of America’s communities and landscapes, documenting quintessential American subjects including L.A.’s freeway system, high school football players, the 2008 presidential inauguration, and U.S. National Parks. In her portraits and landscapes, Opie often establishes levels of ambiguity—of identity and place—through manipulating the focus of her images through cropping, blurring, intense close ups or distance shots, and playing with orientation, often swapping landscape and portrait formats.

In this body of work Opie continues her examination of American identity through exploration of the current physical and political landscape. The photographs Rhetorical Landscapes feature the Okefenokee swamps found in southern Georgia and northern Florida. At first glance, each image appears to be a dense verdant landscape, however, upon closer inspection these photographs reveal unique attributes―an owl staring at the viewer from the center of the composition, or an alligator half submerged in the swamp’s black water―that show the often unseen life that is at risk in these endangered spaces. For Opie, the swamp is emblematic of the dire environmental and human vulnerability that is a result of climate change, ecological preservation issues, and the damage to the Environmental Protection Agency enacted by the Trump administration. This portrayal of the swamp also suggests the common phrase, “draining the swamp,” used by the current administration to refer to the “elimination” of long-standing corruption within the U.S. government. Opie has stated that swamps are peaceful ecosystems that do not need to be drained but are themselves at serious risk, along with our democracy, due to the very real corruption that has only grown over the last four years.

Rhetorical Landscapes also features a collection of animated films that Opie refers to as “political collages,” displayed on human-size monitors that resemble smartphones. These works are composed of magazine cutouts of political figures, animals, environmental destruction, commerce, and urban sprawl that Opie has accumulated over the course of Trump’s presidency. These images are animated against the background of a hand-painted blue grid, referencing both modernist art history and the political collages created by the Bauhaus in Weimar Germany. Each animation addresses a contemporary political issue―nationalism, climate change, immigration, gun control, or the disappearance of natural resources―that is visualized through the gradual accumulation of images that ultimately form a complete digital collage. These animations recall Opie’s recent series, The Modernist, where the protagonist creates a newsprint collage while slowly destroying modernist buildings across Los Angeles. As with The Modernist, the politics of landscape are on display in this new body of work. Opie argues that, like magazines that are disappearing as we become a screen-driven society, the swamp land of the southern United States will also slowly begin to vanish as a result of insufficient environmental protection legislation and climate change.