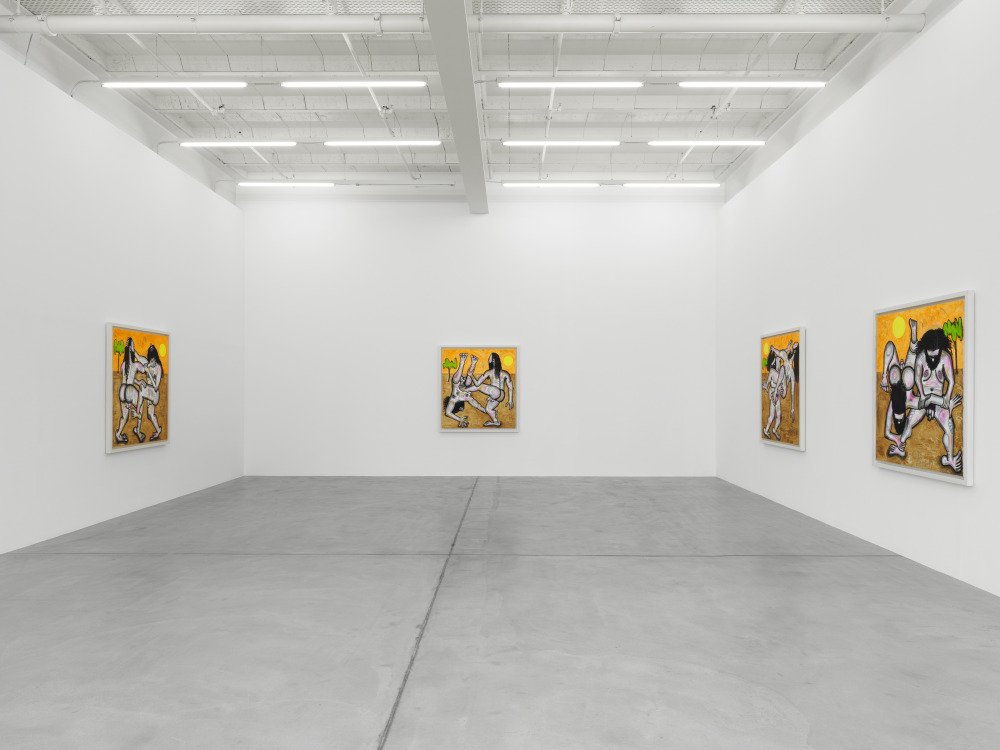 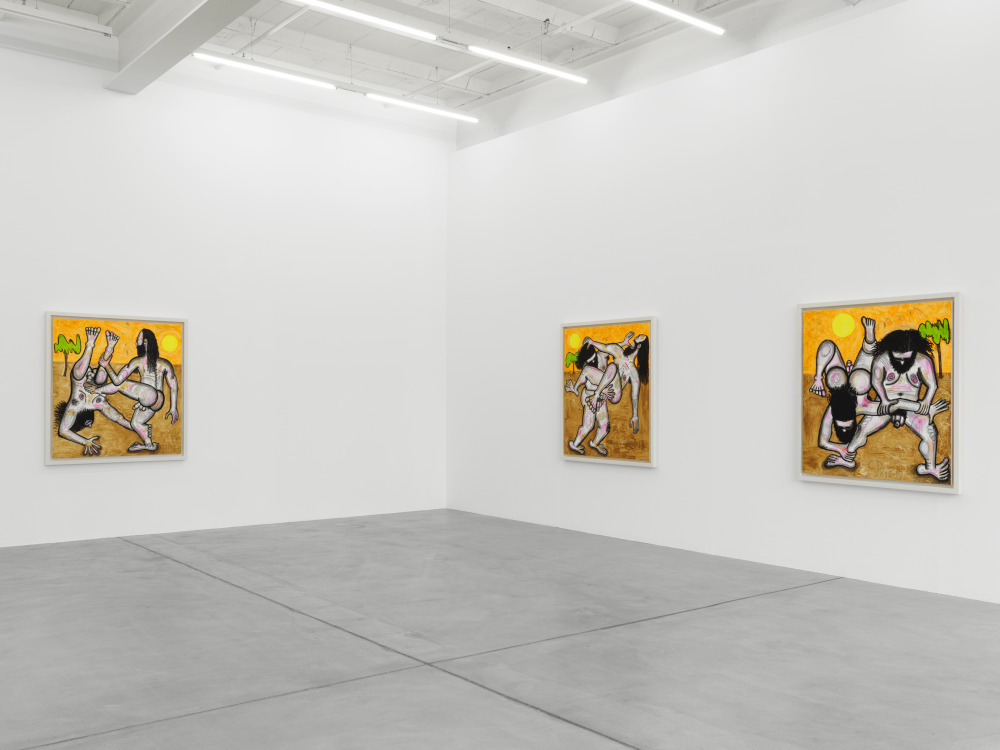 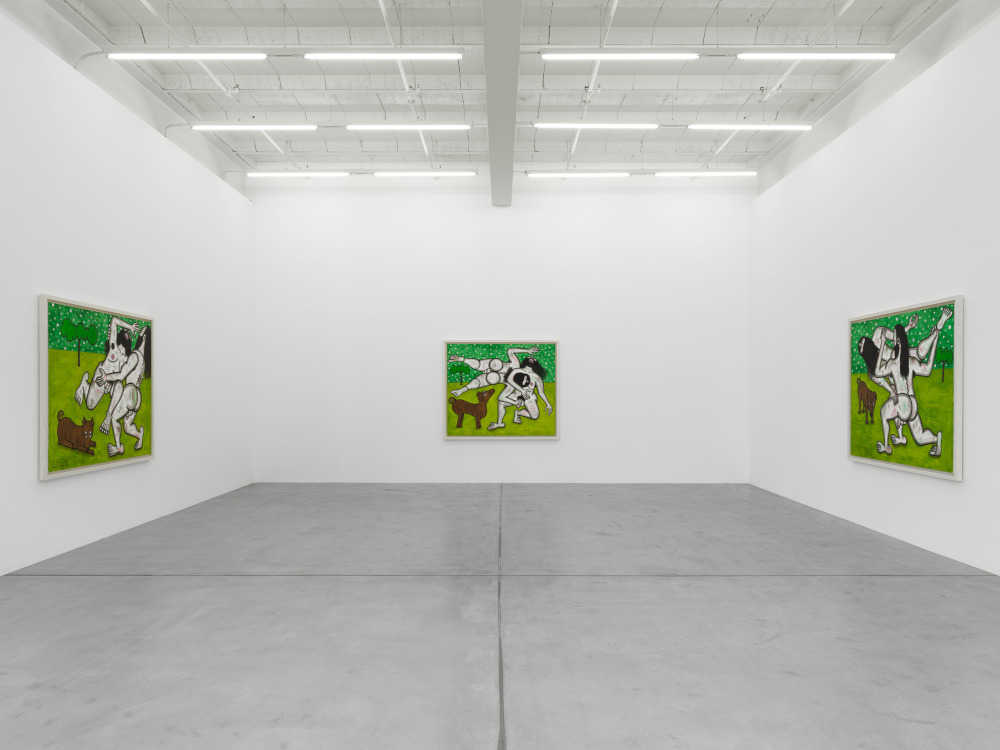 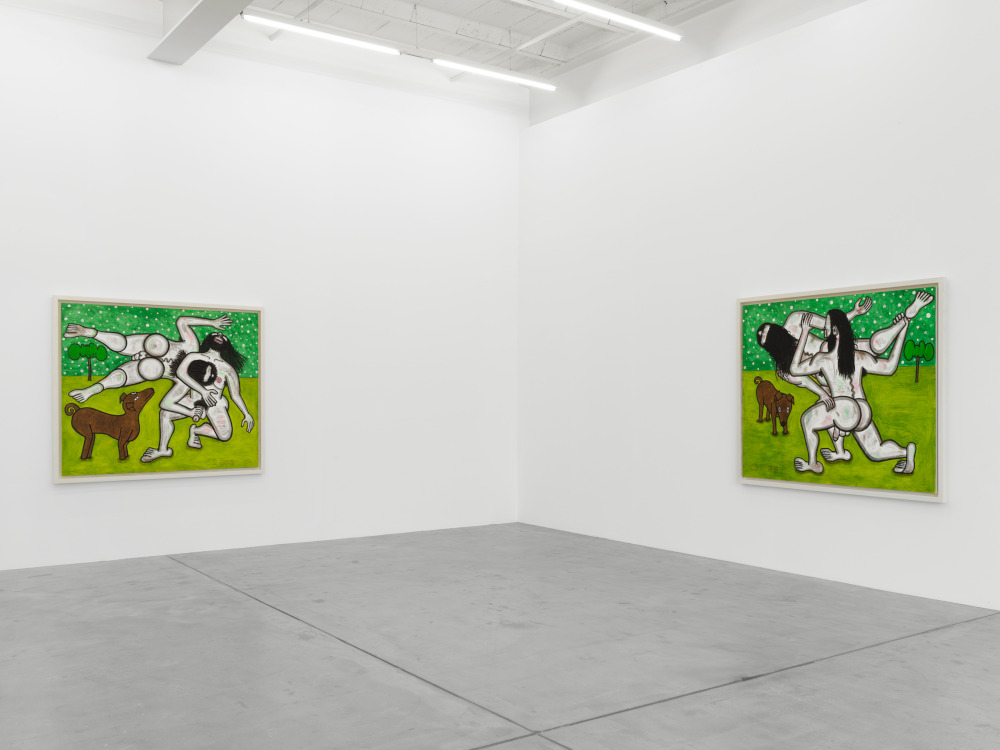 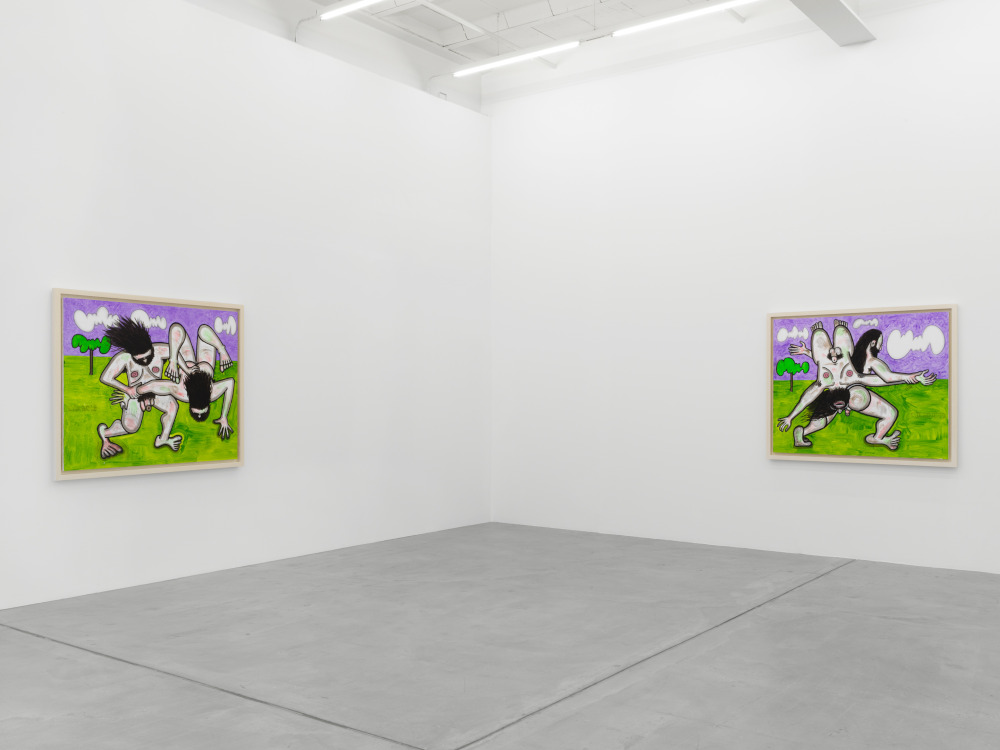 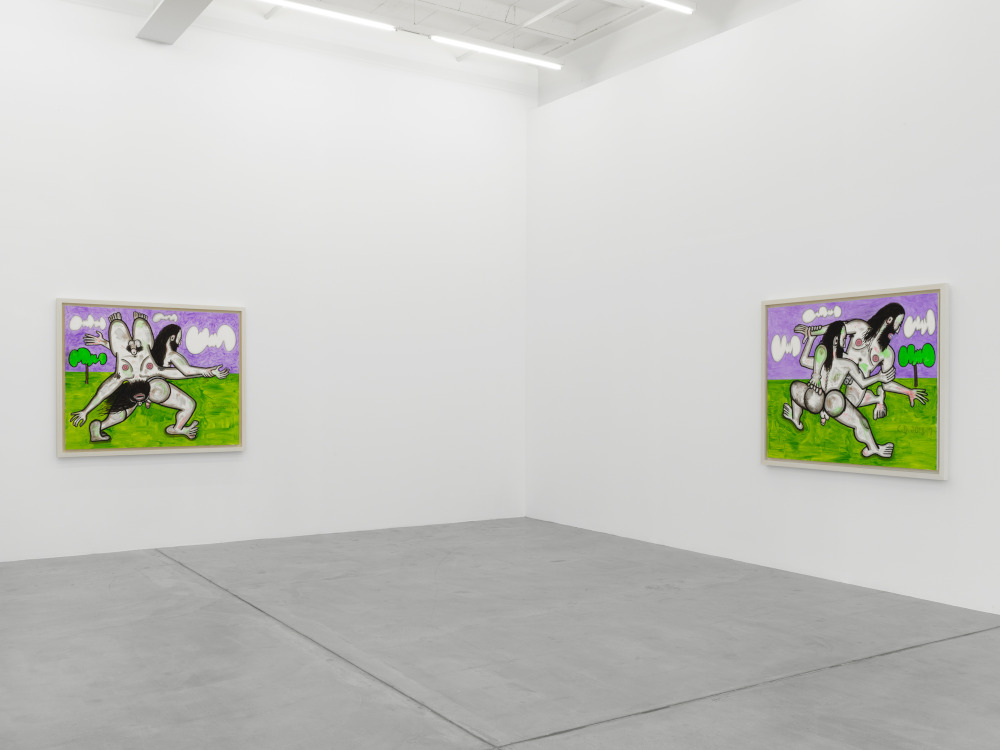 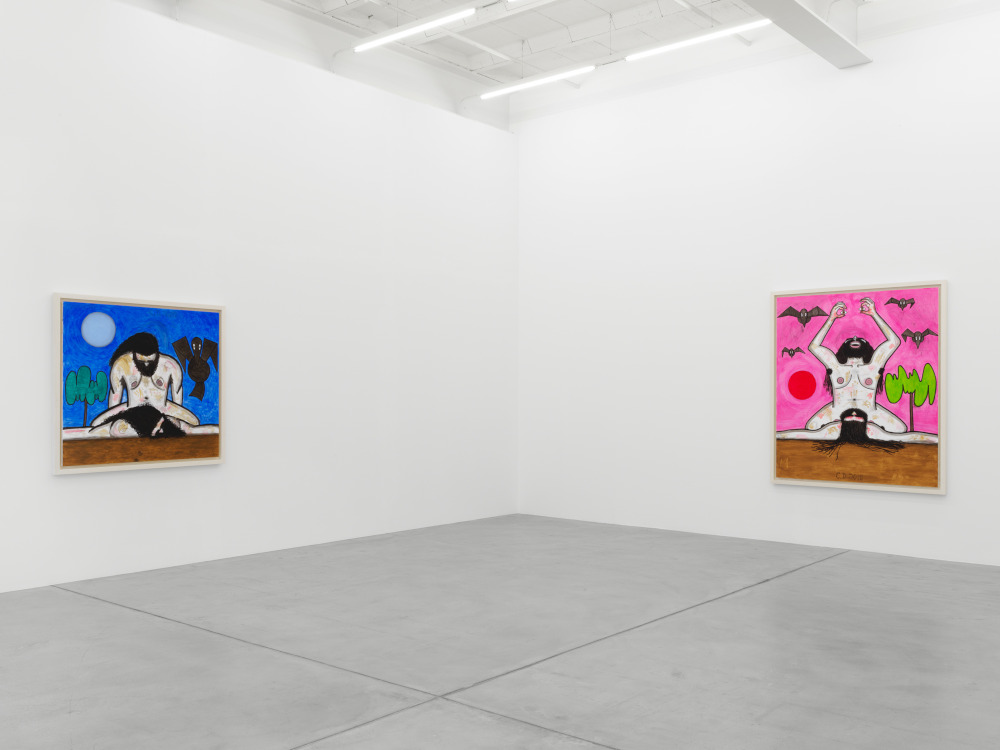 Since the 1980s, Dunham has developed his visual style while creating a significant oeuvre encompassing painting, drawing, print, and sculpture. Minimalist at the outset, his abstract but organic forms became increasingly concrete, depicting series of recurrent figures. One of them is a character with a phallus-like nose that wears a hat and a suit and appears to originate from 1950s crime stories. Later, Dunham was principally preoccupied with the motif of bathers and the lush landscapes surrounding them, as well as with single trees. The personages depicted sustained several changes but always stemmed from precursory forms in his work. As in the evolutionary thought that every being still bears the DNA of the very first microbes, every Dunham canvas bears the forms and brushstrokes of the works that came before.

Dunham’s nude forms have roots in minimalist language and primitivism as well as the pictorial vocabulary of comics. At the same time, one can discover references to famous motifs of art history, such as bathers, as well as to modern artists, including Matisse or Cézanne. While these references are important to Dunham’s practice, they do not form its core. While broadly informed by art history and referring to his own canon, his works are created foremost in the act of painting, in the space between the hand and the canvas.

In 2013, Dunham painted his first wrestlers, a subject that is unexpected enough in the context of his practice and subsequently with regard to his formal approach past and present. The works show two nude men, who closely resemble each other, trying to pin each other down in an ongoing brawl, neither seeming to prevail over the other. The only distinctions from work to work are the chokeholds and other dynamic postures in which one of the wrestlers temporarily overcomes the other. However, the bruised bodies implicate that neither gains the upper hand for long.

Accordingly, the surrounding minimalistic landscapes featuring a single tree seem dateless and placeless. The timeless nature of these depictions can also be said for the motif itself: on the one hand, wrestling features in mythological narratives and often symbolizes two powers – good and evil – fighting each other, for example in the Iliad, in which Homer describes a duel between Odysseus and Ajax. On the other hand, wrestling refers to a biographical fact of Dunham’s real and not at all mythological childhood in Connecticut where he used to wrestle his brother. This begs the question of whether the two identical wrestlers are brothers or enemies – or both.

Formally, the wrestlers are related to Dunham’s bathers notwithstanding their gender: the bulging extremities, the spread out toes, the round buttocks, and the button-like nipples are all familiar features. The combination of white, yet bruised skin and black curly hair resembles the physiques seen in former works, thus exemplifying Dunham’s evolutionary practice in which each painting can be seen as a recombination and mutation of erstwhile works.

Zoomed in details of the male wrestlers resemble the female bathers to a tee: a body jumping into water becomes a wrestler being forced into the air by another; female hair becomes a beard if placed onto the chin; and the tips of penises are nothing more than a round shape with a little dot in the middle, as in works where pink blobs with a black line represented vaginas. The potentially sexually charged motif of two naked men grappling is circumvented by the fact that the genitalia of both figures appears as innocuous as their big toes, in keeping with the underlying geometry of genital representations in Dunham’s work.

With regard to form, the acrobatic wrestling postures appear to be not only dictated by the question of what kind of positions wrestlers can take, but also by the painterly question of how a composition can be dynamic and simultaneously fill the canvas in a perfectly balanced way. In order to create this visual equilibrium, the wrestlers are accompanied by trees, clouds, the sun, and sometimes by quietly watching animals, such as origami-like birds or a small brown dog. No matter how out of control the fight, the compositions fill the canvas seamlessly in a near uncanny way.

Finally, the works on show do not only depict varying stages of an endless fray, but they narrate a story: the last two canvases seen in the exhibition are titled Blue Ending and Red Ending. In these works, one wrestler defeats the other. In contrast to the playfulness in the other paintings, the fight has now taken a consequential turn. While in Blue Ending the inferior fighter could be knocked-out, in Red Ending the superior wrestler has gouged the other’s eyes out and holds his trophies up in a drastic victory pose. Losing one’s eyes is not necessarily fatal, but it would no doubt spell the end of painting, whether from the artist’s or from the viewer’s perspective. At the end of the day, the struggle is also about seeing and thus painting. However, in Dunham’s self-generating practice one ending can only be a new beginning.

A catalogue with an essay by Naomi Fry will accompany the exhibition.