“For decades, Albert Oehlen and Carroll Dunham have subjected painting to a constant stress test, breaking it down into its components: colour, materiality, and brushwork, line, structure, layering, technique, title, pathos, iconography, and the disappointment and expectation of the recipient.”
– Olga Nevzorova

Galerie Max Hetzler, London presents Carroll Dunham | Albert Oehlen, a joint exhibition of paintings which explores the stylistic diversity of two of the most innovative painters of our time. This is the first presentation of Carroll Dunham’s work in the UK since 2006 and follows the artists’ travelling exhibition Carroll Dunham / Albert Oehlen: Trees at the Kunsthalle Düsseldorf (2019) and Sprengel Museum, Hanover (2020). 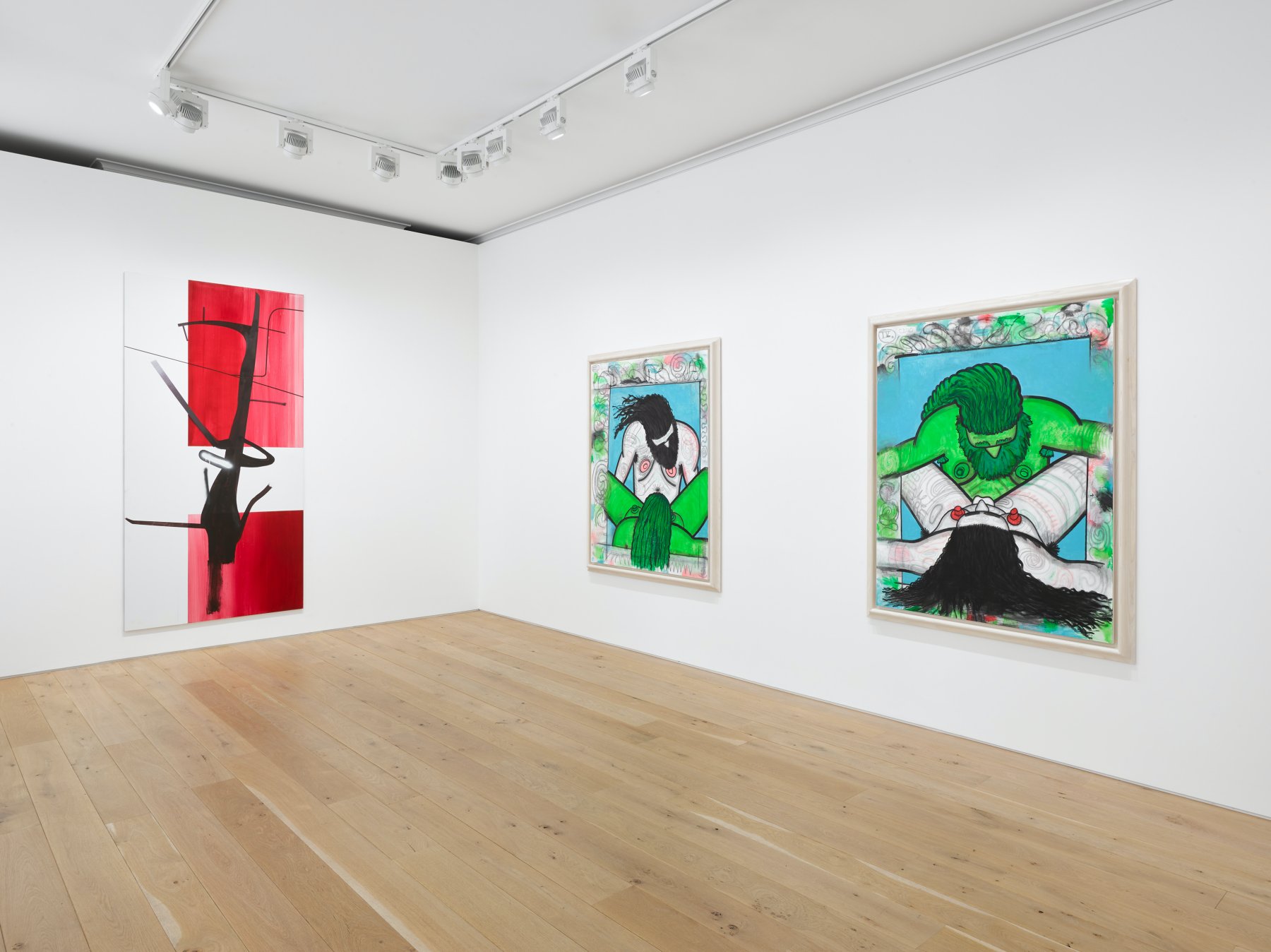 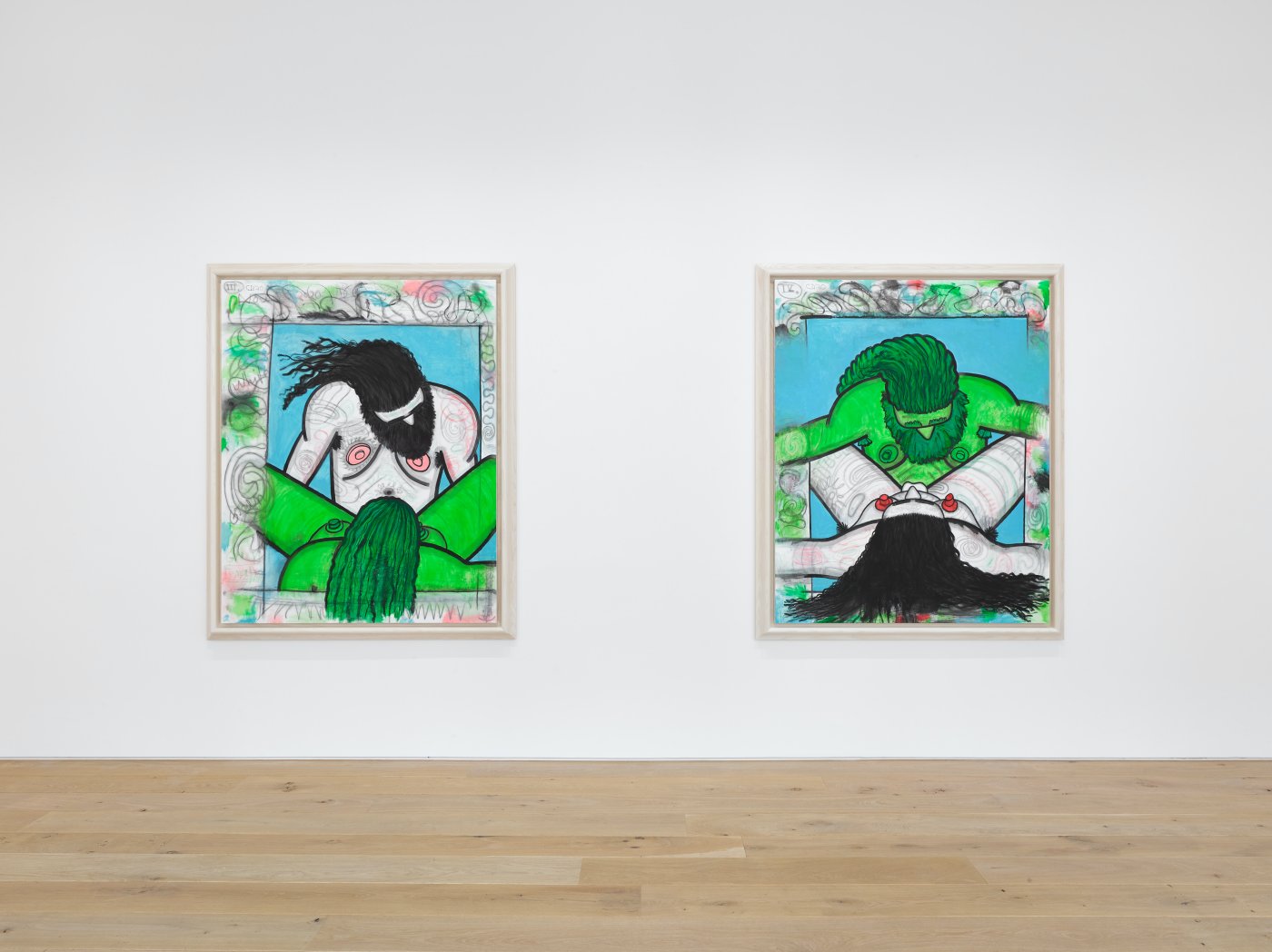 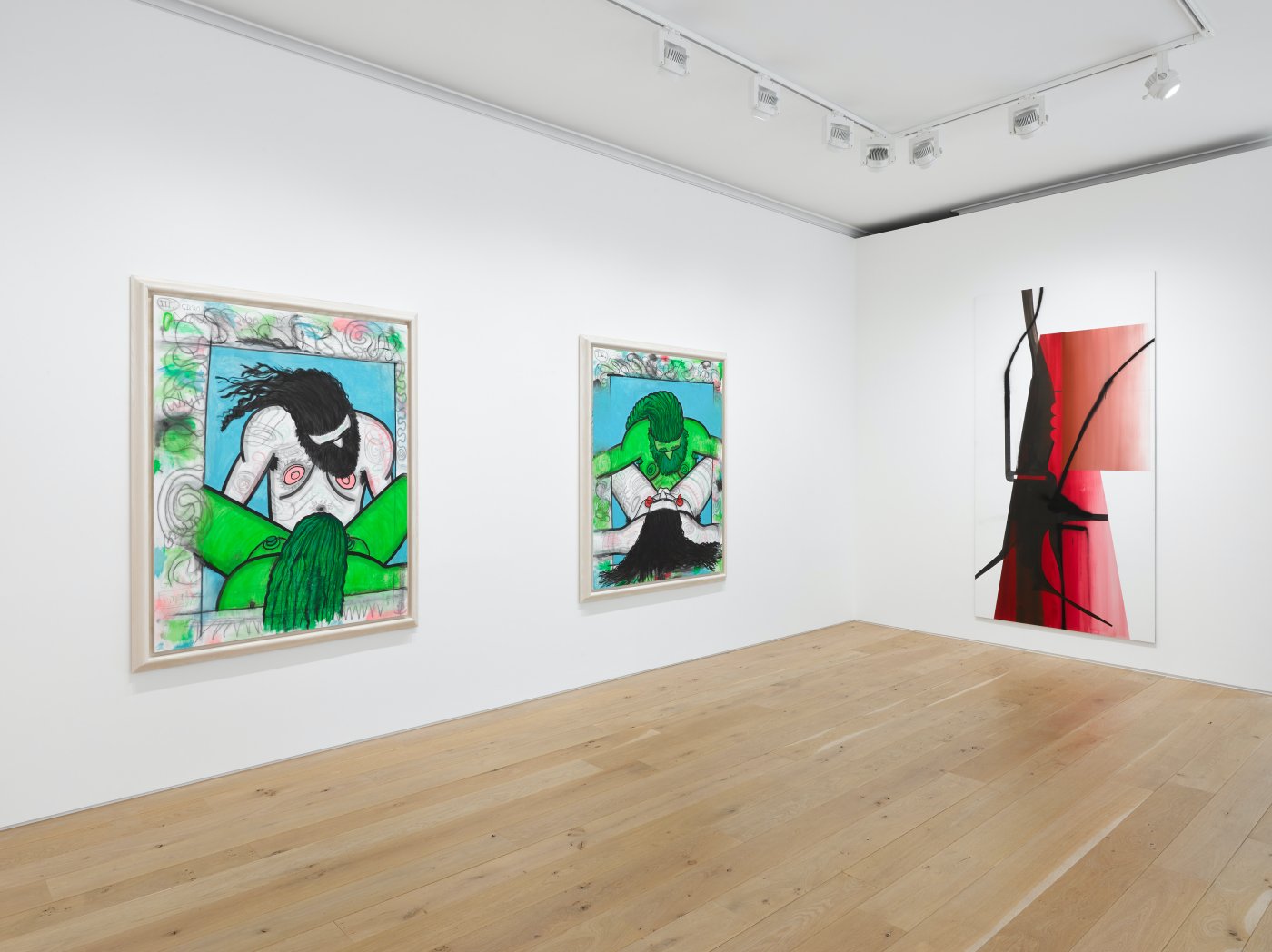 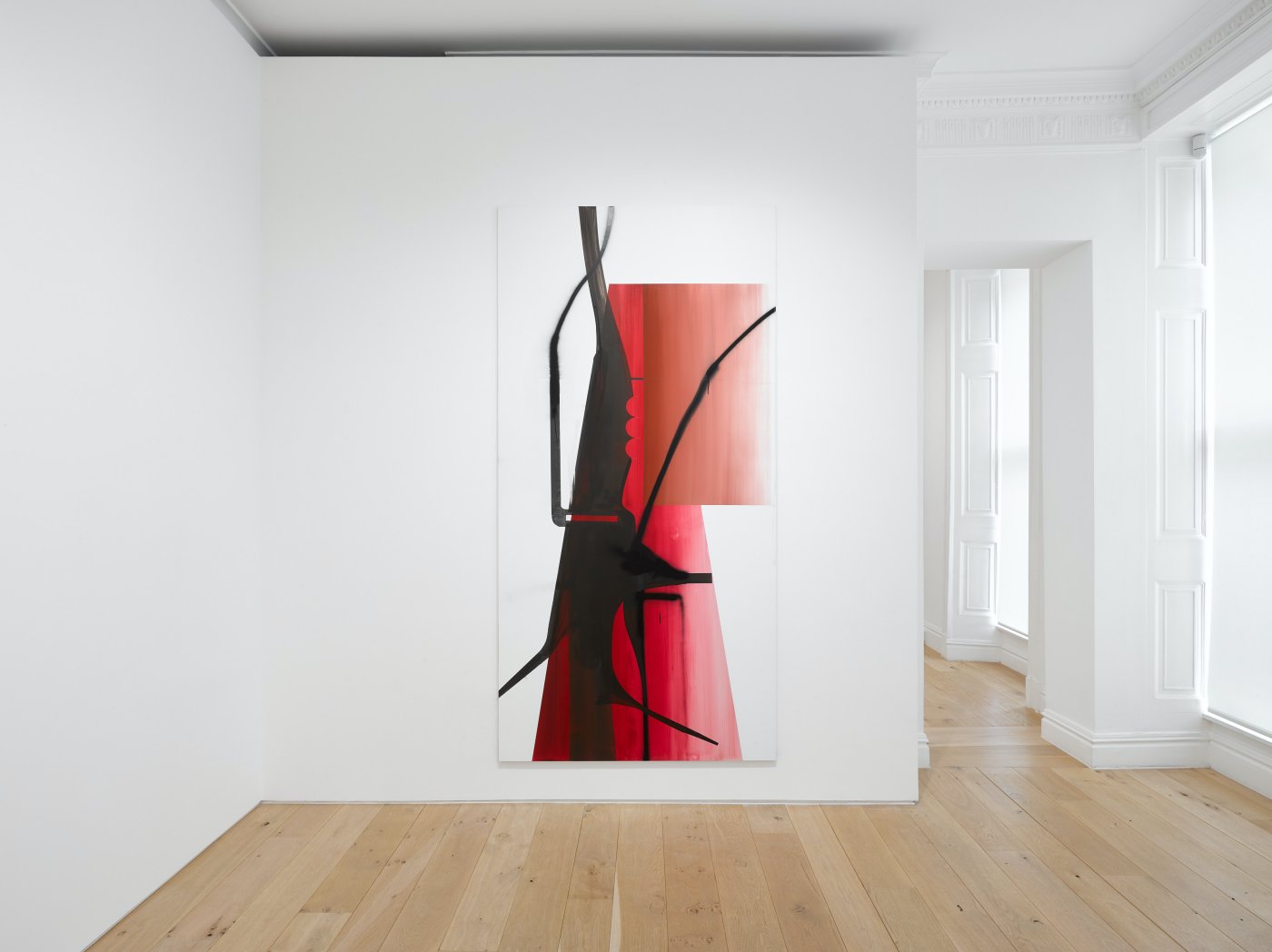 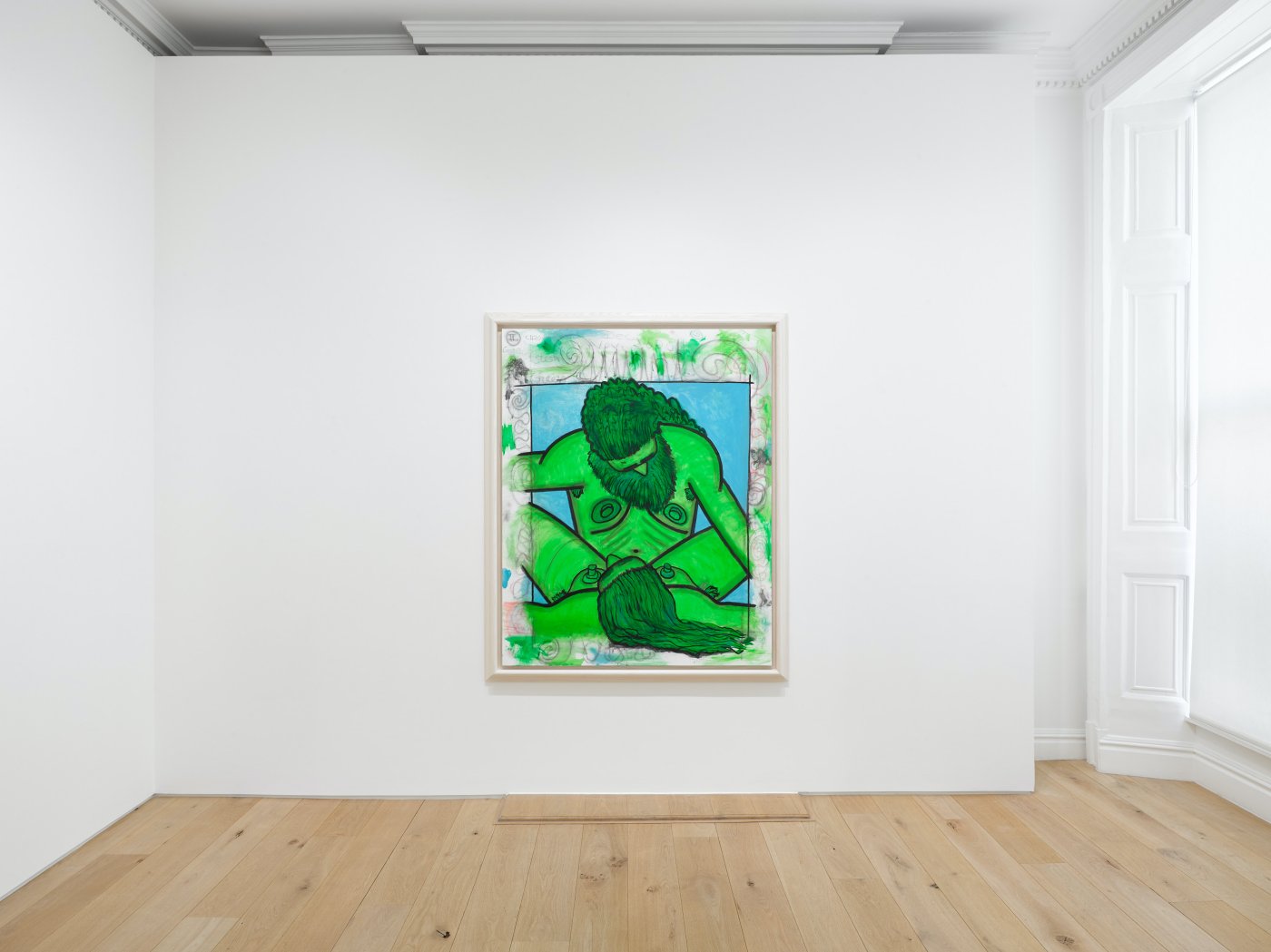 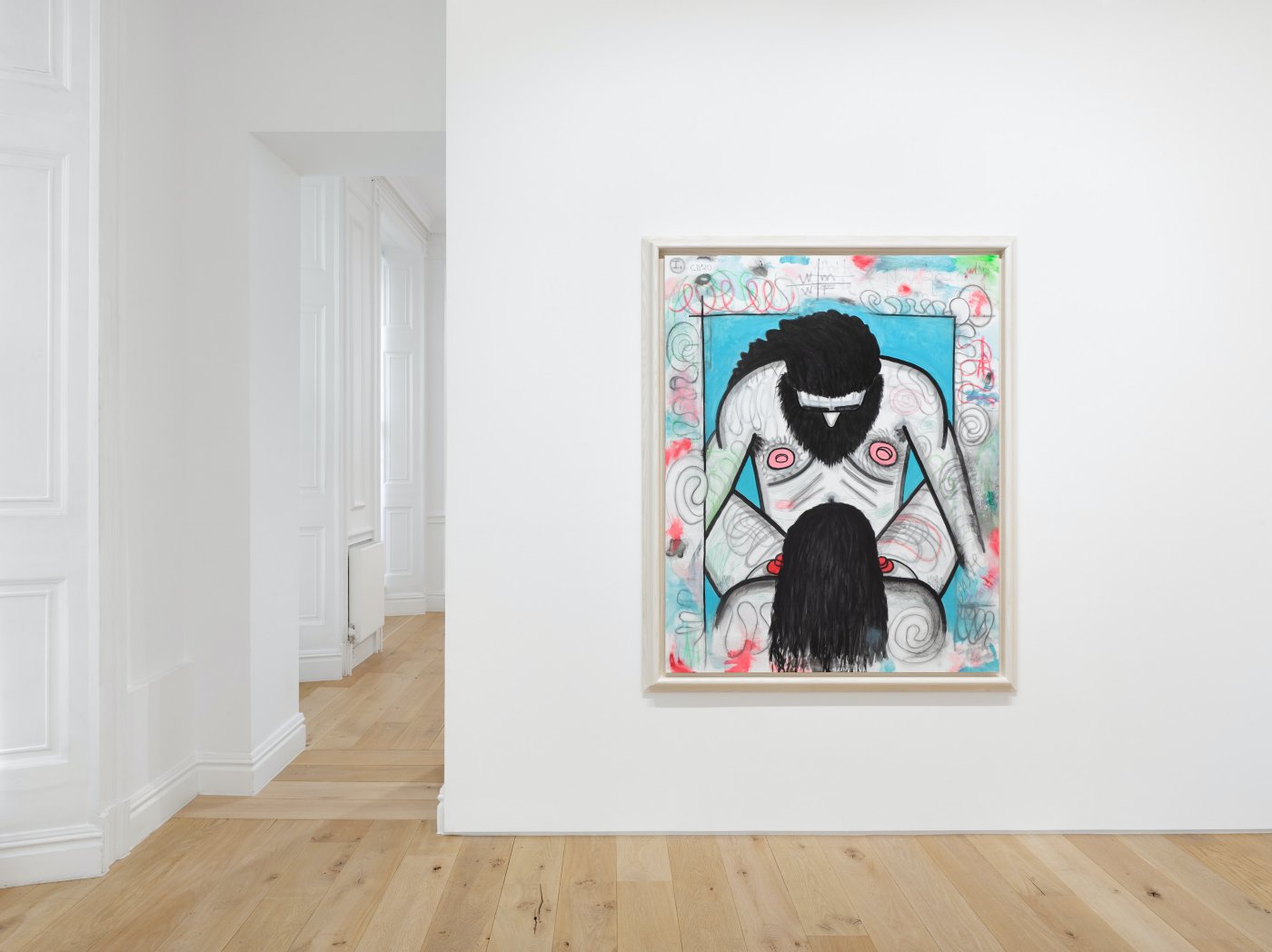 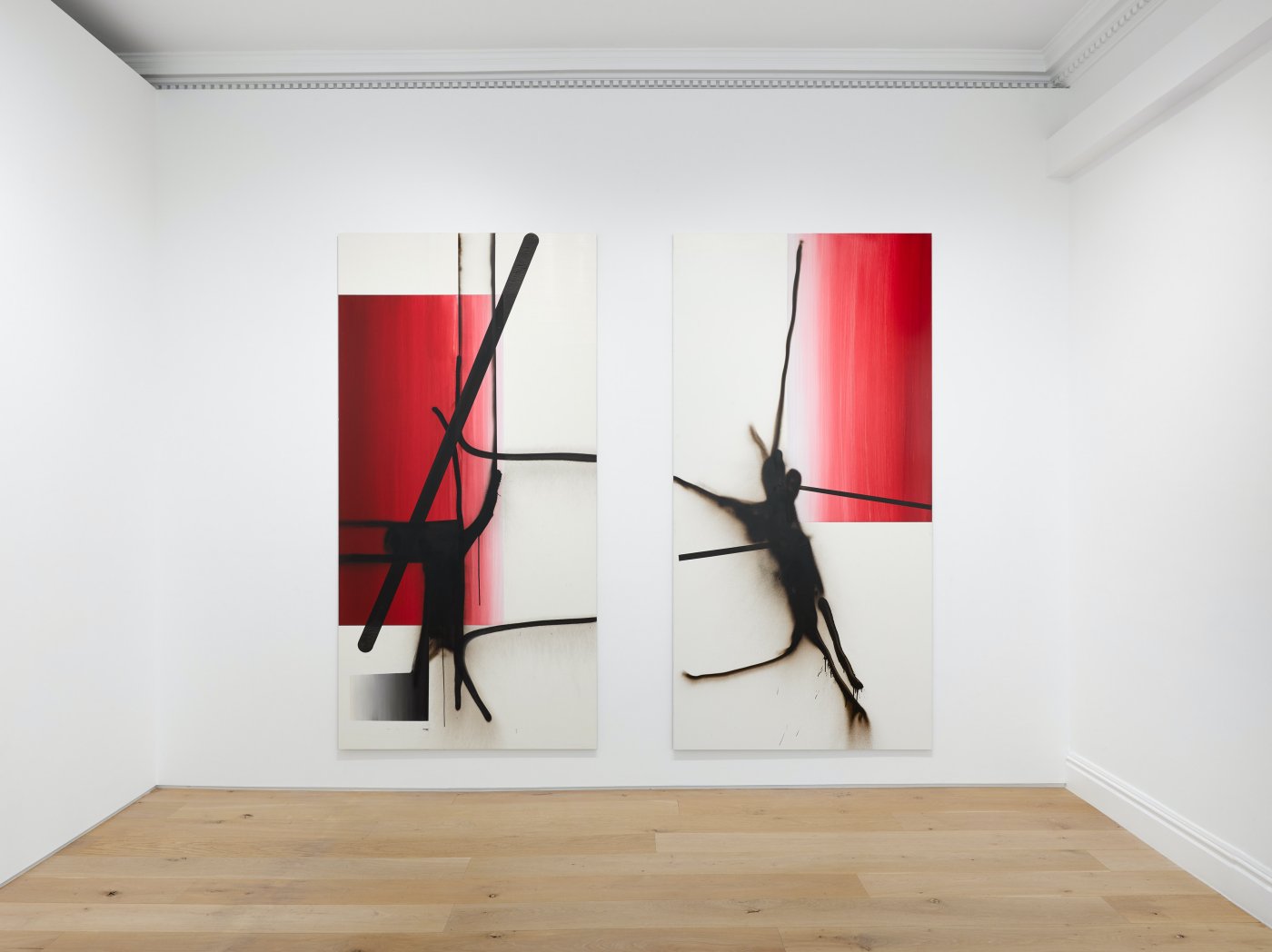 As leading painters of their generation, Carroll Dunham (*1949, New Haven, Connecticut) and Albert Oehlen (*1954, Krefeld) are celebrated for their independent and highly distinctive oeuvre. Over the last decades, both artists have continuously tested the conventions of painting while working in unique and radically opposite pictorial languages. Whereas Albert Oehlen shifted from figuration towards “post- non-representational” painting in the late 1980s, Carroll Dunham’s anthropomorphic abstraction of the 1970s has evolved into a surreal universe foregrounding human figures.

Dunham’s series Proof of Concept marks a new development in the artist’s oeuvre, uniting male and female figures in the composition for the first time. In the four paintings included in the exhibition, the nude limbs are geometrically splayed out across the composition, actively breaking through the confines of the drawn frame. With the figures’ faces turned away, the viewer is confronted with the charged physicality of their bodies, assuming the role of the voyeuristic outsider. The foreshortened and cropped depiction of the body, reminiscent of both Modernist nudes and antique bas-relief friezes, reflects Dunham’s acute knowledge of art history. Catalysed by formal vibrancy and repeated symmetry, the subject’s intense physicality is brought to the fore. The dynamism of the figures is further accentuated by acidic block colours and bold outlines set in opposition to swirling, delicate lines, revealing the painting process through visible pentimenti. Uniting male and female archetypes in a psychedelic utopian vision, Proof of Concept exposes and questions stereotypes about gender, sexuality and human nature, providing insight into the subjects’ complex internal world.

Albert Oehlen’s series of Baumbilder (Tree Paintings) epitomises the artist’s ongoing exploration of abstraction in painterly form. A recurring subject throughout Oehlen’s oeuvre, the tree first emerged in the artist’s work in the 1980s. Since 2013, the artist has systematically re-examined the tree motif, using it as a programme, a tool to probe the formal and conceptual foundations of painting. In the exhibited works, the tree is stripped down to its essential geometric structure, its bare and leafless silhouette extending in black lines across blocks of magenta colour on white ground, seemingly suspended mid- air. The acidic magenta hue, traditionally used in inkjet printing and characterised as a “hysterical colour” by the artist, is evocative of Oehlen’s ongoing engagement with digital aesthetics. Executed on panels of Dibond—aluminium-coated sheets frequently used for printing—the Tree Paintings appear as though digitally manufactured, only revealing their painterly nature upon closer observation. In an assortment of painted, stencilled and sprayed lines, mechanical forms clash with hand-made gestures. Integrating both organic and structural elements, Oehlen’s Baumbilder are elegant yet uncanny, bringing together form and content, abstraction and representation.

The show is concurrent with unverständliche braune Bilder, a solo exhibition of new paintings by Albert Oehlen at Galerie Max Hetzler, Berlin in April 2021. A solo exhibition of Oehlen’s work will be on view at MASI, Lugano from September 2021 to February 2022.