Lisson Gallery presents an exhibition of new and historic work by Carmen Herrera, the first ever large-scale presentation of the artist’s Estructuras. 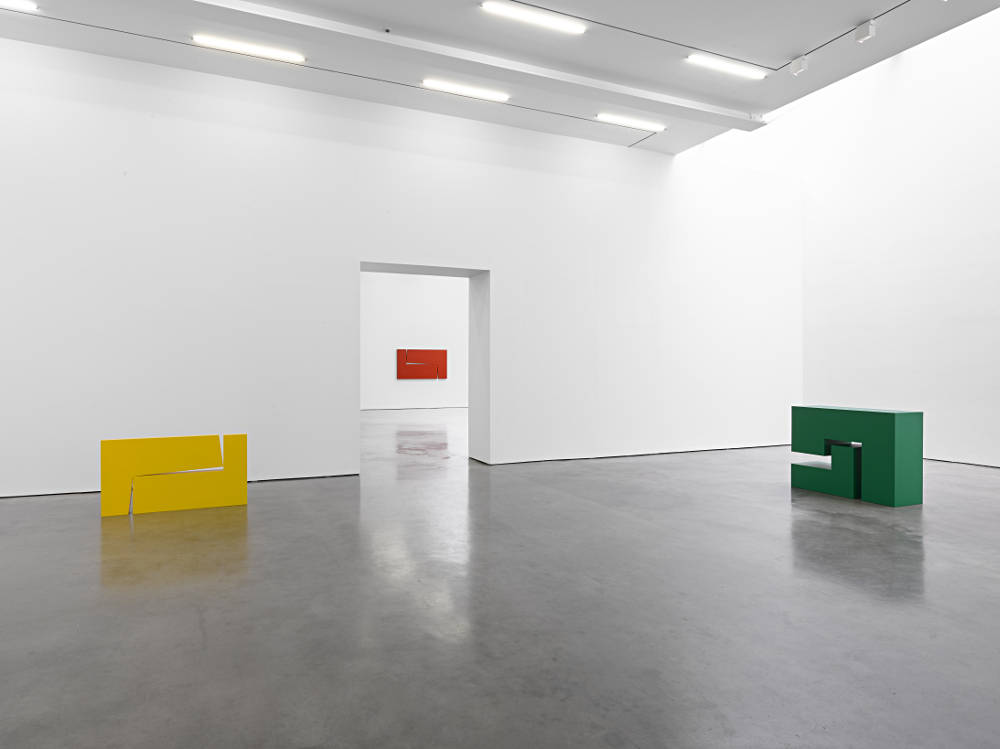 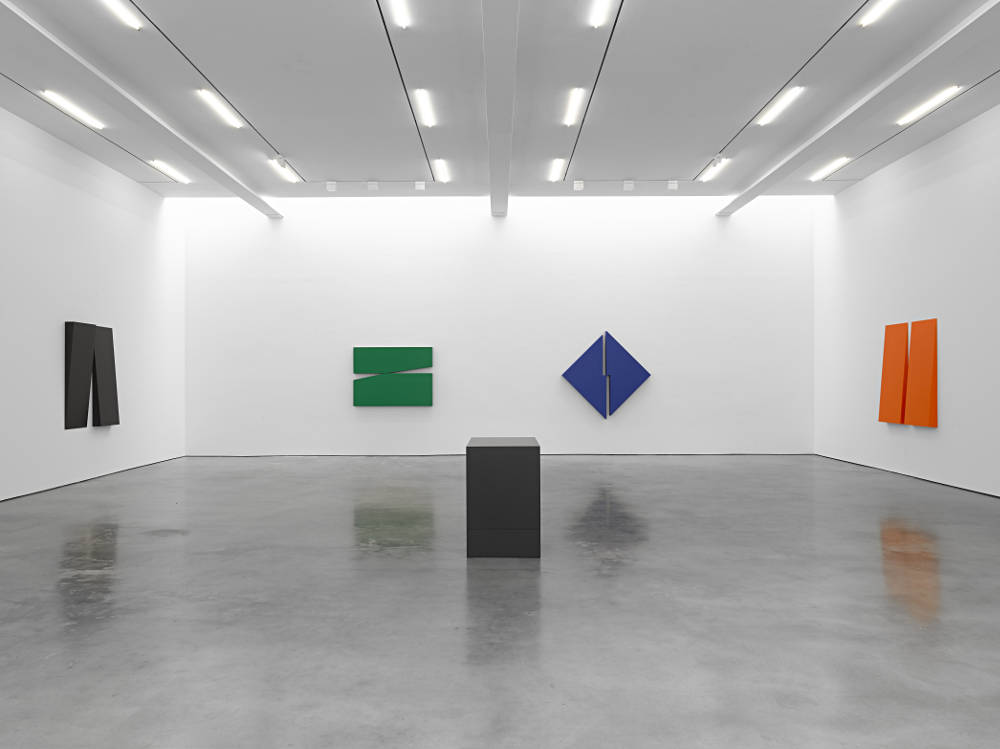 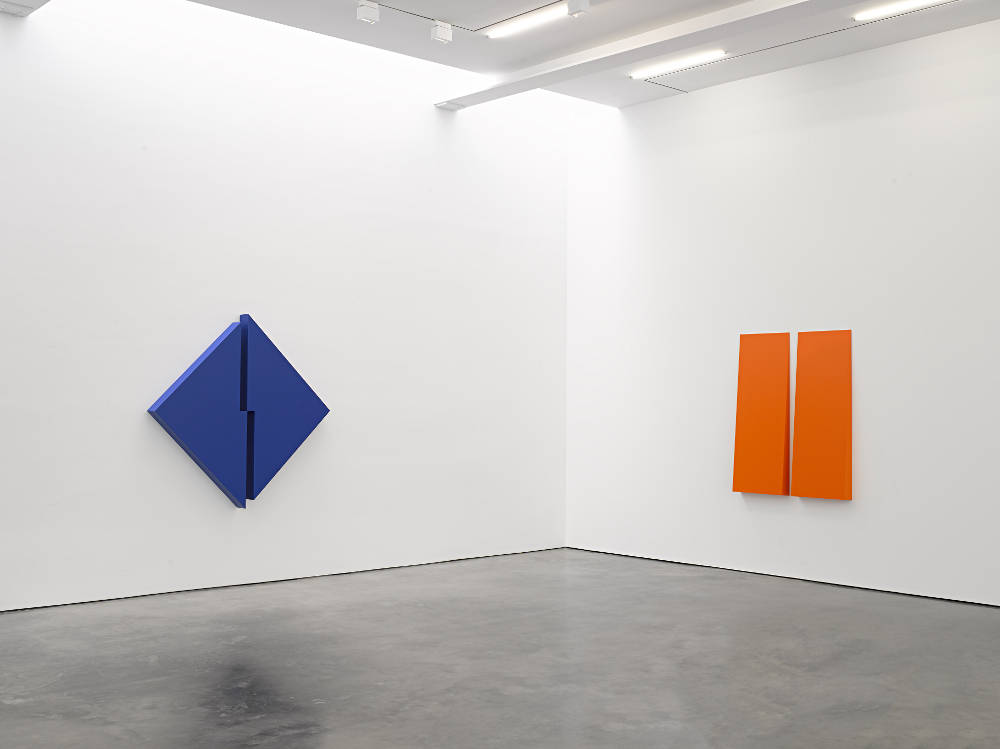 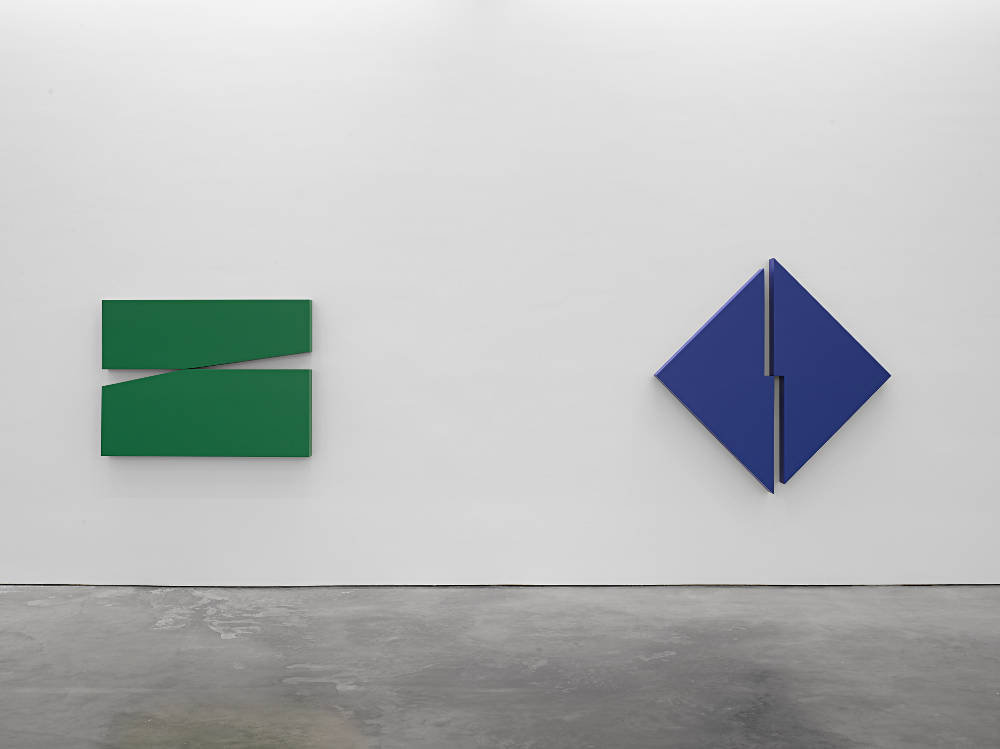 Based on paintings “really crying out to become sculpture”, Herrera’s Estructuras represent a rare break in Herrera’s insistent planarity and two dimensionality of her paintings. The exhibition at Lisson features twelve of these sculpted works, as well as sketches and drawings, and marks Herrera’s seventh show with the gallery.

Herrera began the sketches and preparations for her Estructuras (Structures) in the late 1960s, around the same time that key Minimalism sculptors including Carl Andre, Donald Judd and Barnett Newman were early in their exploration of the medium. Of the shift Herrera has noted: “It became clear to me that the linear elements in my work required a hard surface to integrate structurally the “hard edges”.” After receiving the second of two awards from the CINTAS Foundation in 1969 (an organization supporting Cuban artists working outside of Cuba), she used the funds to hire a carpenter to begin to execute this shift from the single plane. He assisted Herrera in creating wooden sculptural works in fiberboard, Sytrofoam and epoxy. These works marked an important moment in Herrera’s career, wherein the forms move from drawing, to painting, to sculpture, and her meticulous sharp edges are physically manifested. However, upon completion of a group of wooden structures in 1971, the carpenter sadly passed away and Herrera, running low on funding, abandoned the project and returned to painting for the following decades. Azul ‘Tres’, a rare early blue wooden Estructura created in 1971, is included in the exhibition.

Herrera envisioned the Estructuras in an environmental sense, using the surrounding walls as a part of the composition. These irregularly-shaped works technically remain her only monochromes, however Herrera envisions the white of the wall exposed in the negative space as the second color. The exhibition features a selection of new painted aluminum structures – eight wall works and four works which are installed on the floor – furthering the architecturally oriented abstraction into the wider gallery space. The dynamic composition of the floor-based Estructuras convey movement and rhythm though a careful geometric balance of lines, forms and color.

Lisson Gallery will publish a comprehensive monograph of the entire Estructuras series, available in summer 2019. The definitive publication will feature an essay by Dana Miller, curator of the recent travelling retrospective on Herrera’s work, Lines of Sight, as well as rare archival material, sketches and drawings which have never been published.

Core to Carmen Herrera’s painting is a drive for formal simplicity and a striking sense of color: “My quest”, she says, “is for the simplest of pictorial resolutions” (2012). A master of crisp lines and contrasting chromatic planes, Herrera creates symmetry, asymmetry and an infinite variety of movement, rhythm and spatial tension across the canvas with the most unobtrusive application of paint. As she moved towards pure, geometric abstraction in the post-war years in Paris, she exhibited alongside Theo van Doesburg, Max Bill and Piet Mondrian and a younger generation of Latin American artists, such as members of the Venezuelan Los Disidentes, Brazilian Concretists and the Argentinian Grupo Madi. Her work also chimes with her peers from the U.S. school such as Barnett Newman and Leon Polk Smith. Reflecting on this period, she says, “I began a lifelong process of purification, a process of taking away what isn’t essential” (2005). While allied with Latin American non-representational concrete painting, Herrera’s body of work has established, quietly but steadily, a cross-cultural dialogue within the international history of modernist abstraction.

Carmen Herrera was born in Havana, Cuba in 1915. She moved frequently between France and Cuba throughout the 1930s and 1940s; having started studying architecture at the Universidad de La Habana, Havana, Cuba (1938–39), she trained at the Art Students League, New York, NY, USA (1942–43), before exhibiting five times at the Salon des Réalités Nouvelles, Musée d’Art Moderne de la Ville de Paris, France (1949–53). She settled in New York in 1954, where she continues to live and work. Herrera’s work was the subject of a large-scale survey at the Whitney Museum of American Art in New York (September 2016 – January 2017), which traveled to the Wexner Center for the Arts in Columbus, Ohio (February – April 2017) and Kunstsammlung Nordrhein-Westfalen (K20) in Dusseldorf, Germany (December 2017 – April 2018). A selection of Herrera’s recent paintings and Estructuras inaugurated Lisson Gallery New York’s 24th Street exhibition space in May 2016. Herrera has also had solo exhibitions at Museum Pfalzgalerie Kaiserslautern, Kaiserslautern, Germany (2010); Ikon Gallery, Birmingham, UK (2009); and Museo del Barrio, New York, NY, USA (1998). She has been included in the group shows at Museum of Fine Arts, Houston, TX, USA (2017); The Underground Museum, Los Angeles, CA, USA (2017); Haus der Kunst, Munich, Germany (2016); Phoenix Museum of Art, AZ, USA (2013); and Sheldon Museum of Art, NE, USA (2012), among others. Her work will be featured in the upcoming exhibitions ‘Géométries Sud, Du Mexique à la Terre de Feu’ at Fondation Cartier pour l’art contemporain in Paris, France (opening October 14, 2018) and ‘Epic Abstraction: Pollock to Herrera’ at The Met Breuer in New York (opening November 28, 2018).