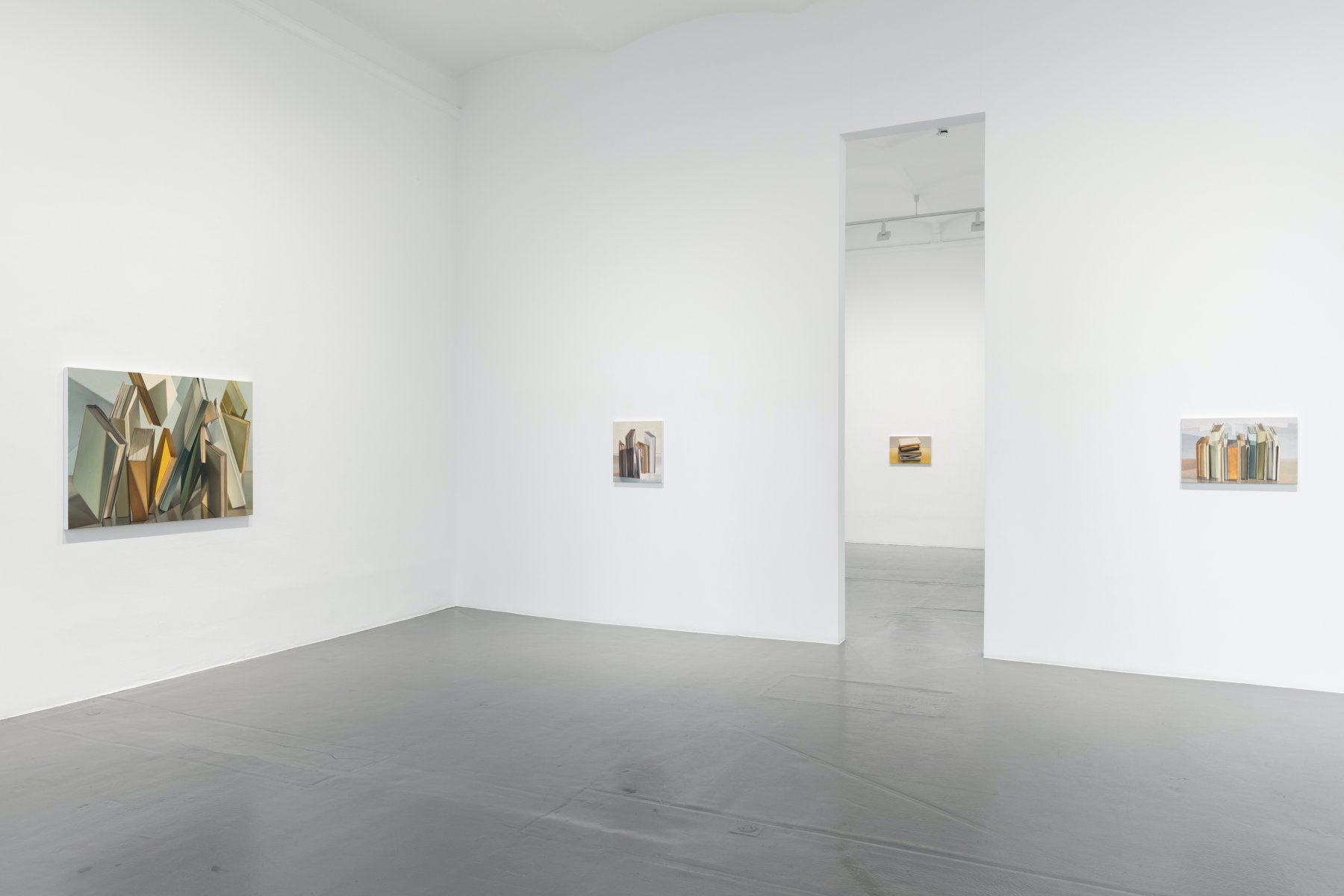 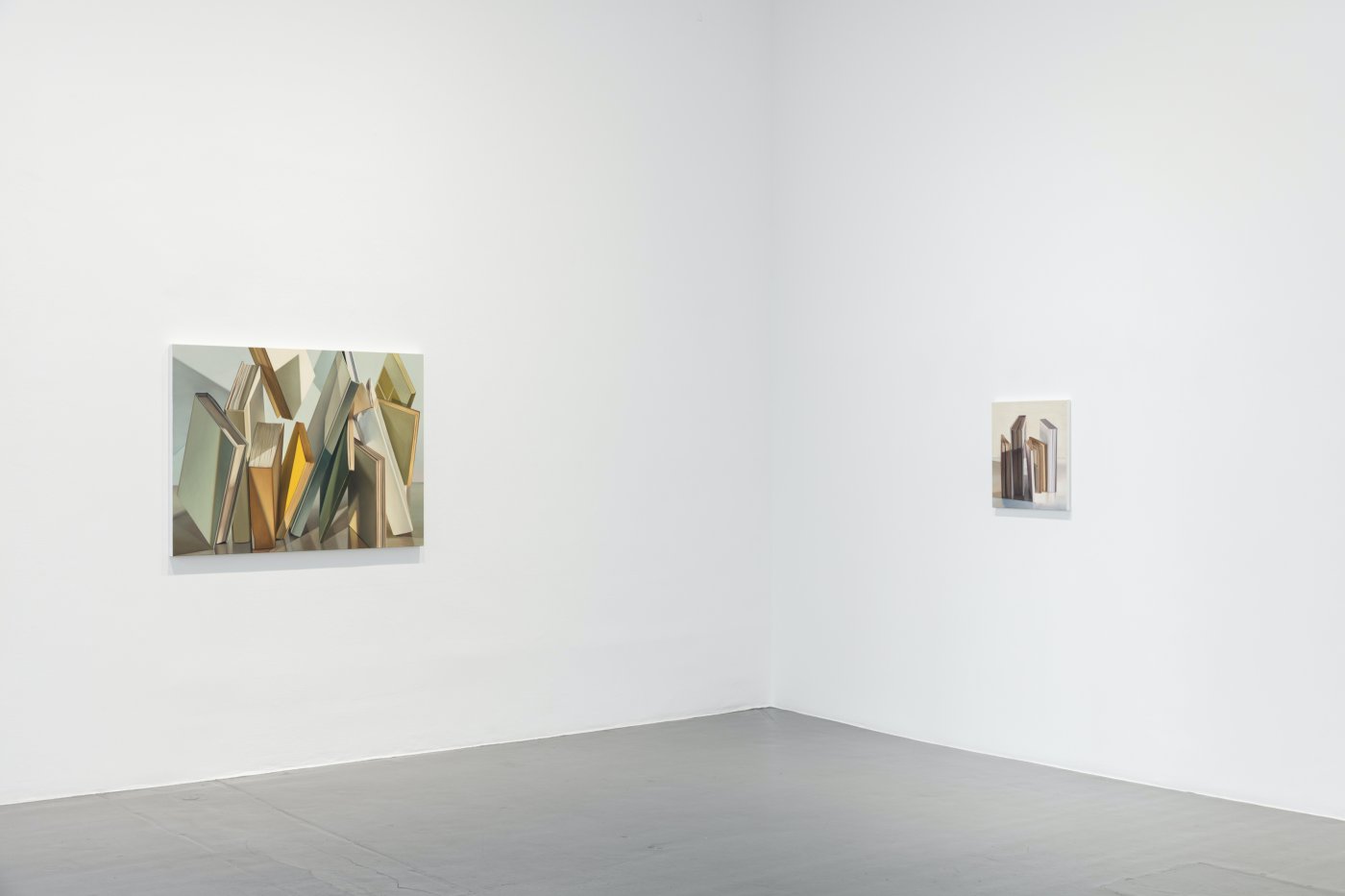 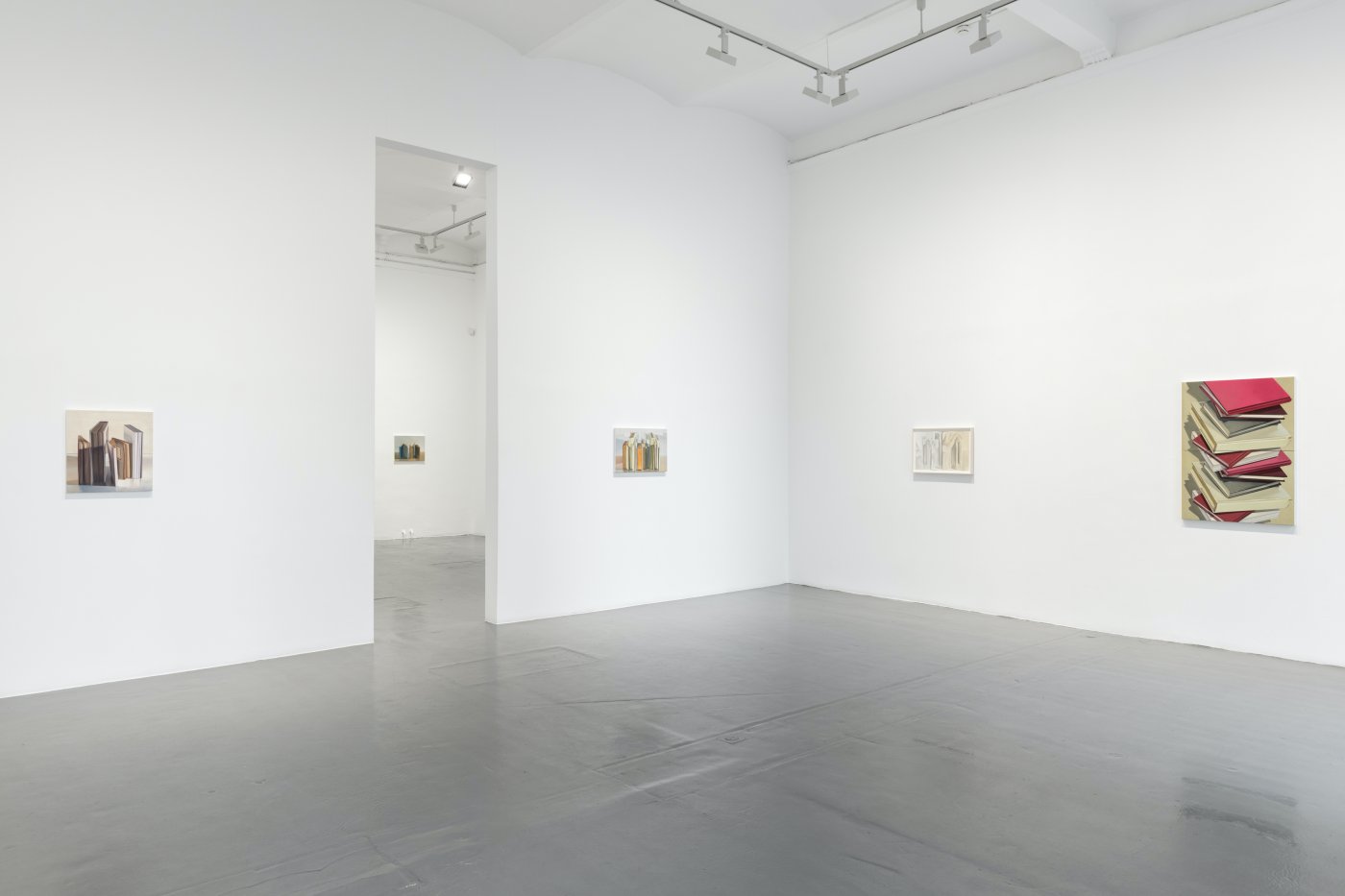 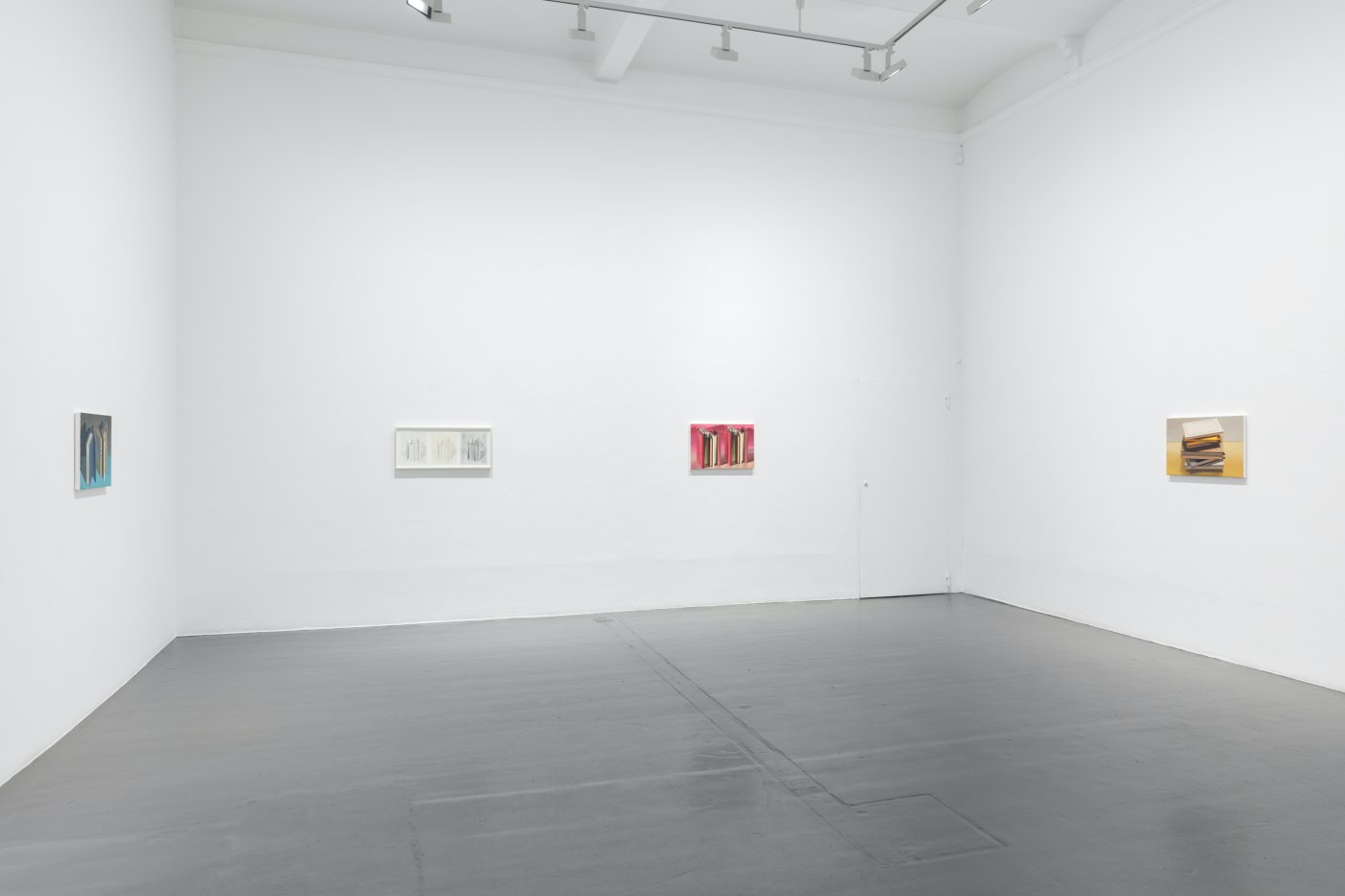 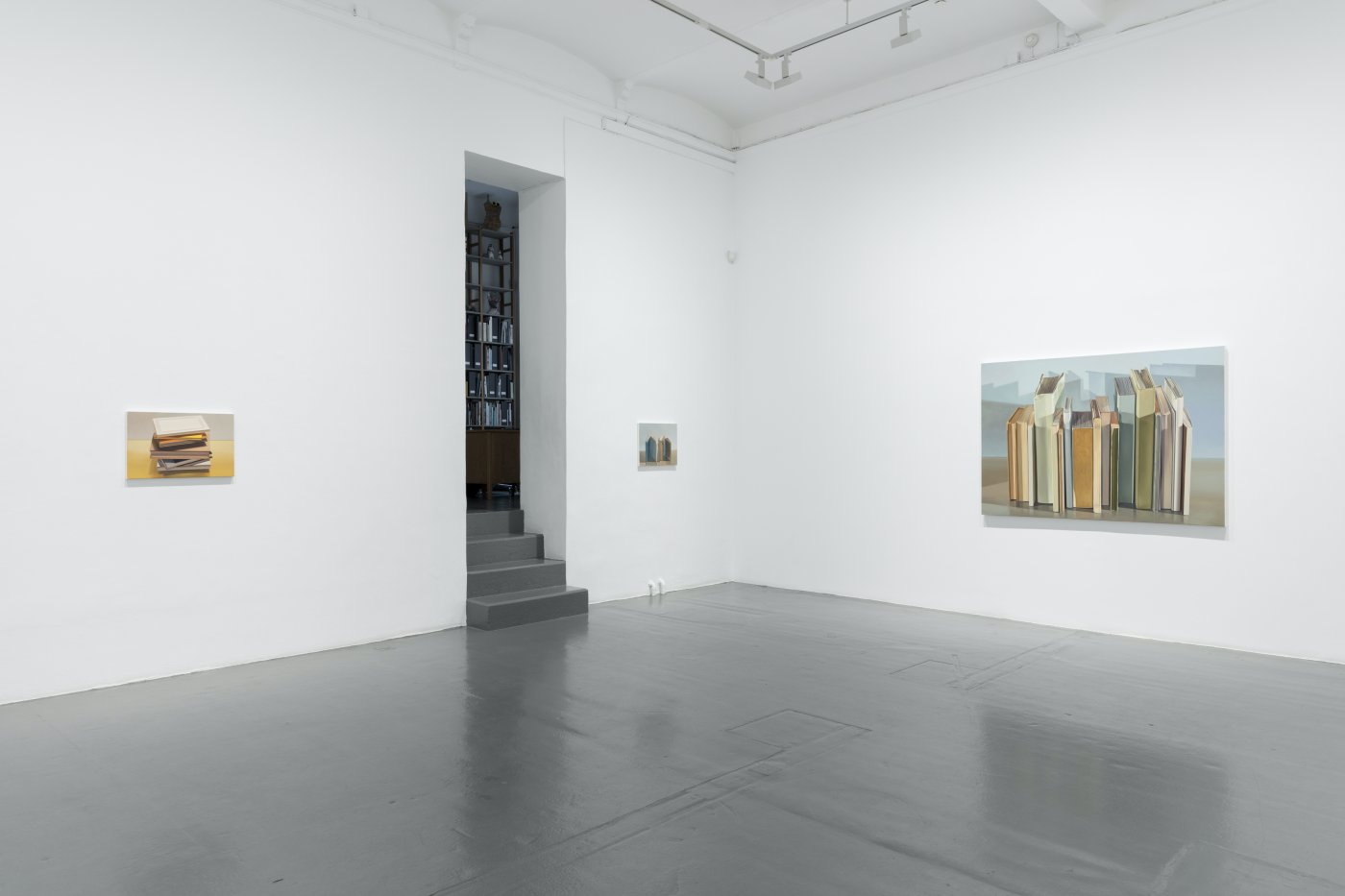 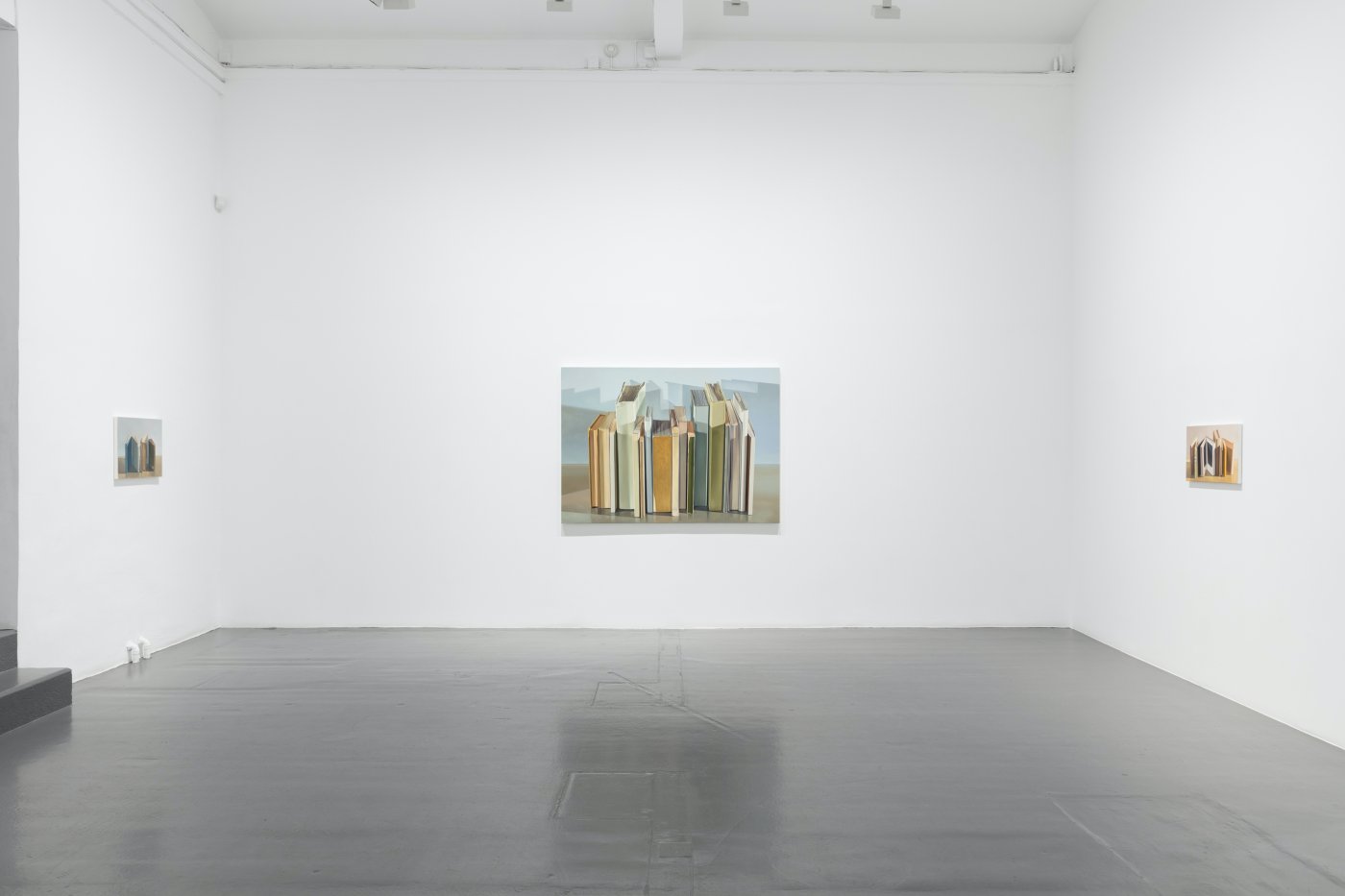 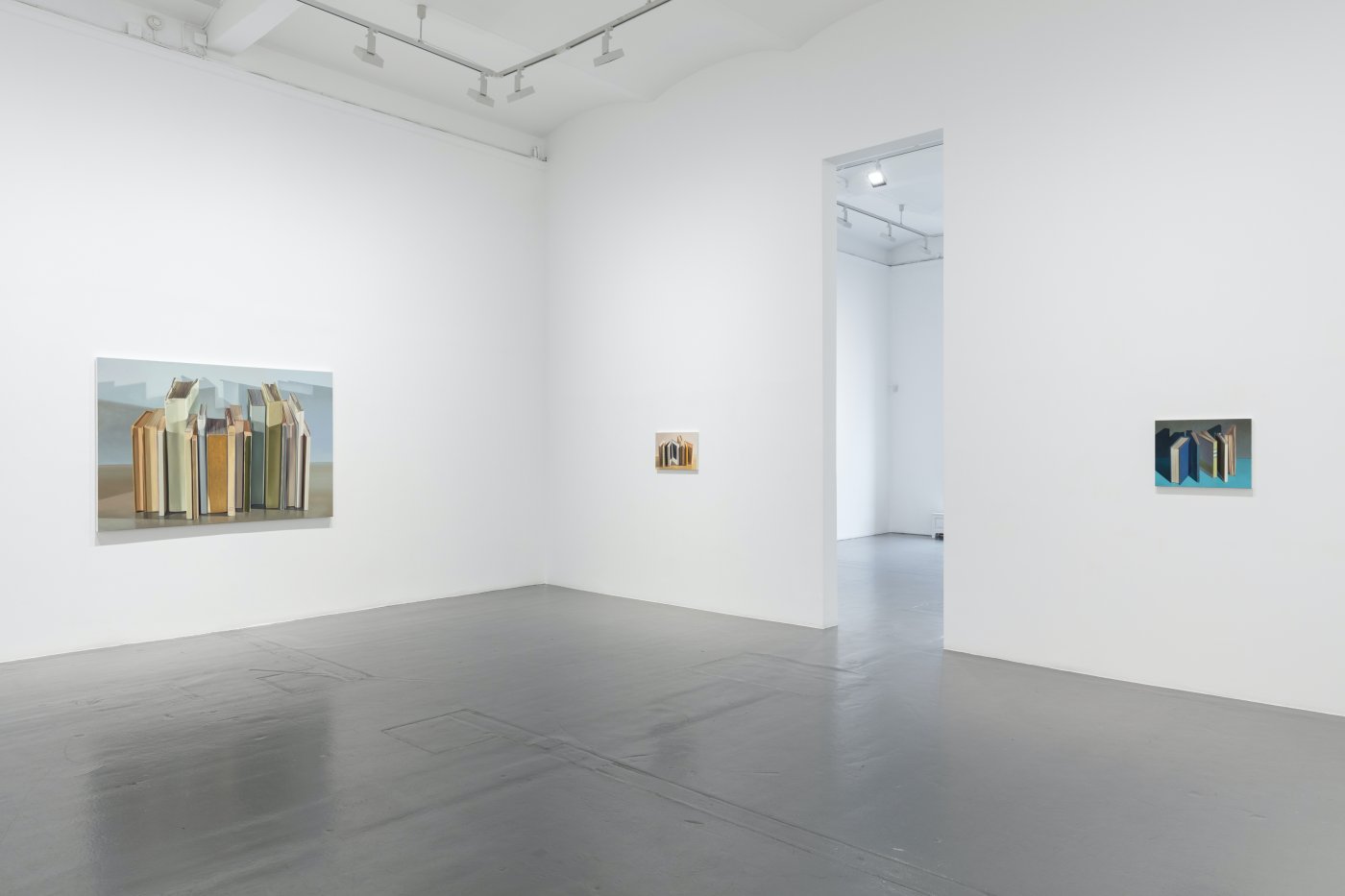 Books have been a reccurring motif in Carl Hammoud’s imagery since his first exhibition at the gallery in 2005. He is interested in them both as objects and carriers of content. Hammoud has often worked with the concept of ​​the book as a portal to other ideas, another way of looking at his surroundings. They can be an opening to a world that is larger than the one we know, but at the same time more condensed and within reach.

The paintings in the exhibition show a series of still lifes with books. But we do not know what books we are looking at or what language they are written in. They are all without texts, labels or anything else that can identify them. Most of them stand up, on their heads or on their feet. Some of them turn their backs on us, in other cases we see the front. They may be reminiscent of figures or buildings. Rectangles whose color, proportions and depth may remind us of something we have seen, or something we think we have seen. A result of an accumulated experience where the components have different values, comparable to the thickness of a book. The thinner books balance with the support of the thicker ones, who can stand up without support. If you remove one of them you risk imbalance, which could cause them to fall against each other, creating a domino effect.

When we read books, we move through a third dimension – in depth. On one side of the fold, Recto, we see which way we have walked, what experiences we have had. On the other side, Verso, the unknown awaits. Many times we visualize what we cannot understand. We try to see it in front of us. What was previously veiled in darkness is now uncovered and the image we have created is illuminated. Much like our vision is depending on how different surfaces reflect light.

The light in the paintings fall in different directions both from the right and left sides. Or from the east and west. If you consider the movement of the sun across the sky, it can be seen as a way of experimenting with time, or encapsulating several time measures in the same space. The objects are released from their geographical coordinates and no longer have a given location or a given value.

A significant part of the work process has been focused on building the still lifes that serve as models for the paintings. The books have been balanced, twisted and turned in different constellations. With the help of lamps and mirrors, the lighting has been directed, reflected and dimmed. They have been ”painted” in real life before being applied to the two-dimensional surface. When the motifs finally reach the canvases, there are no guarantees as to which direction is right. Maybe the motif has been mirrored? Maybe it is reality that is unreal?

Our questions lead to new assumptions that are tested against the existing ones. We create new ideas and add them to the memory of the thoughts we have had, the experiences we have taken part in, the books we have read. But the closer the books are pushed together, the greater the risk that they will eventually tip over. It is merely in the hands of a light gust of wind or the movement of the earth’s rotation.