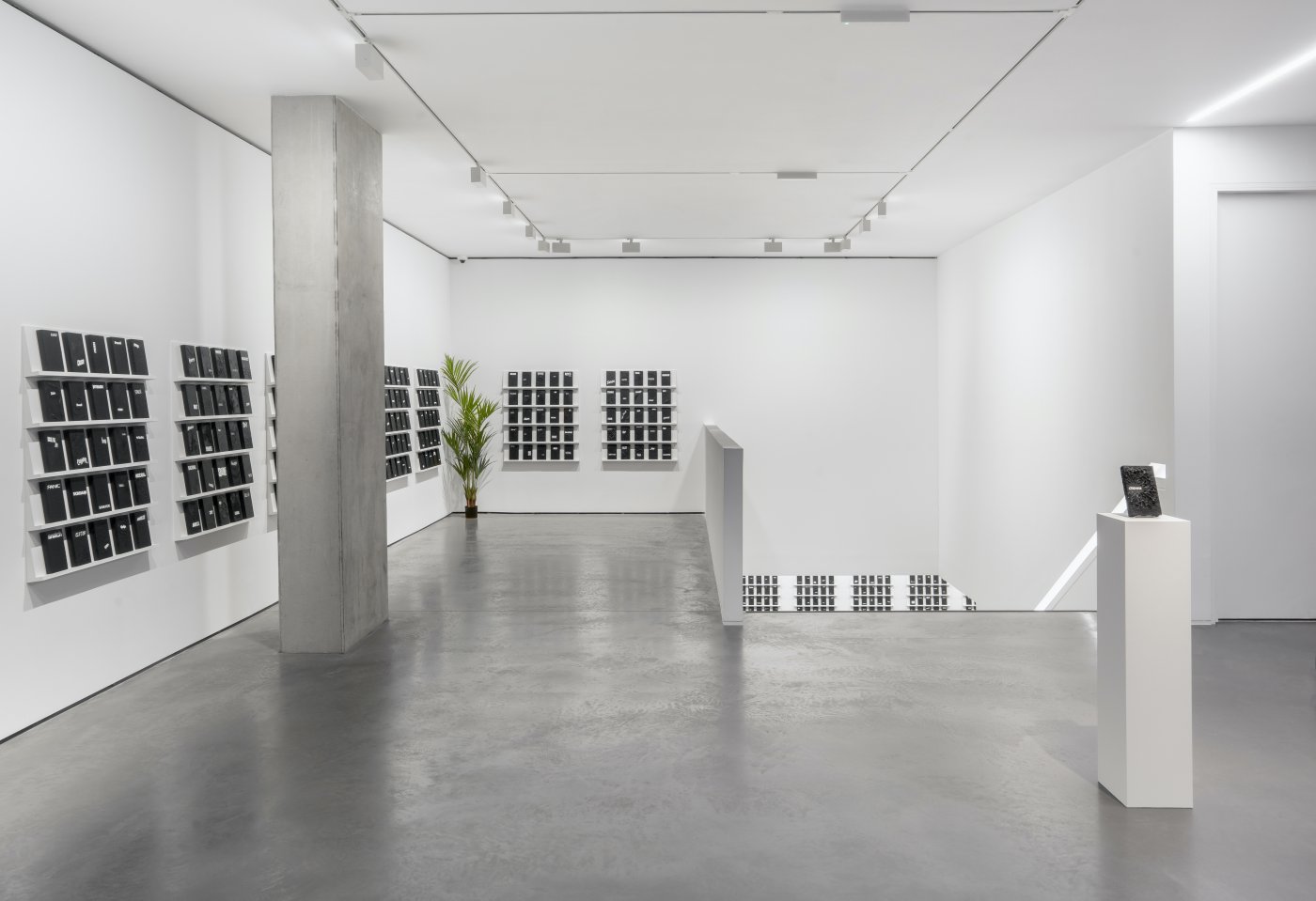 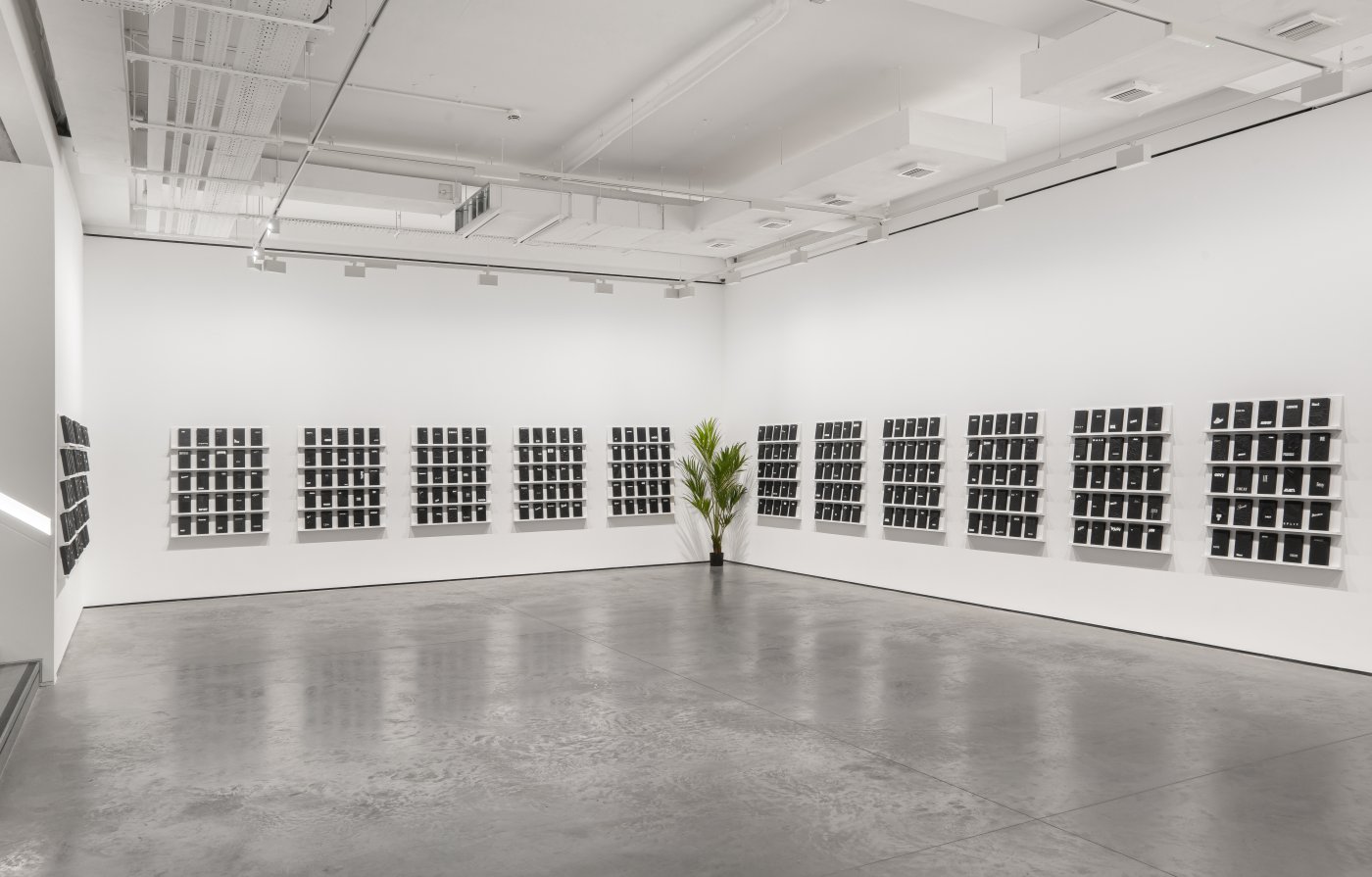 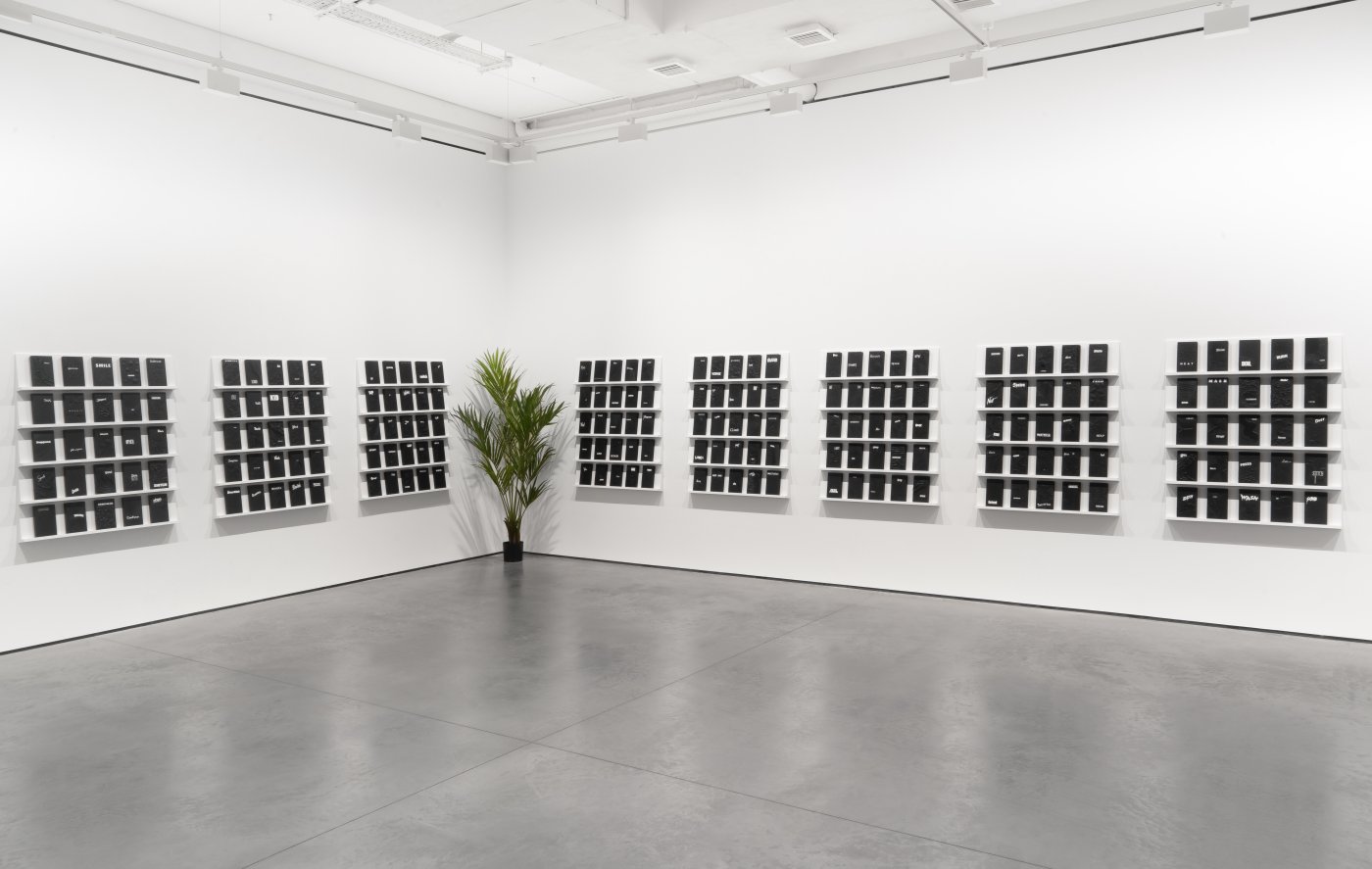 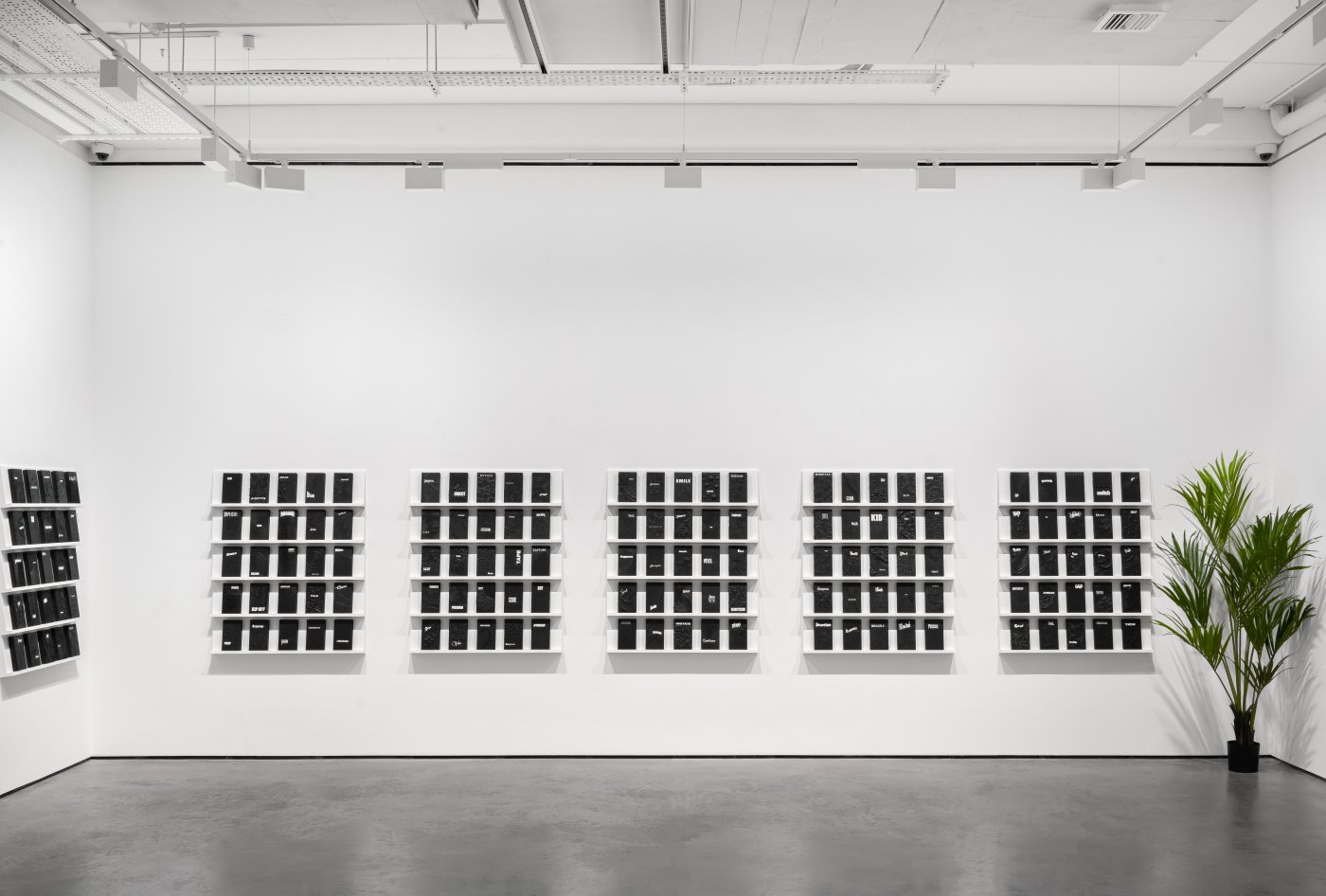 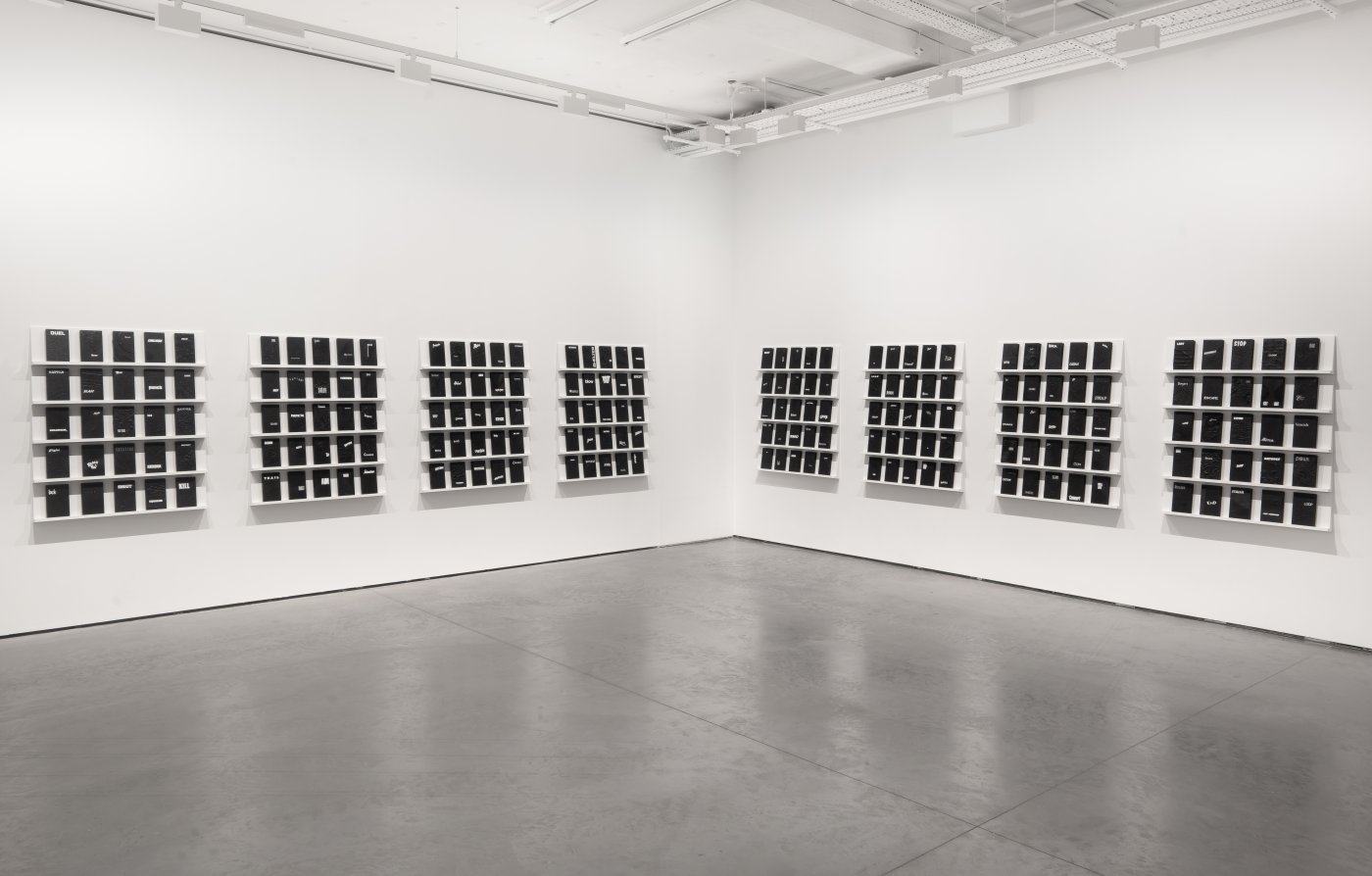 Digest is a multi-channel video installation that consists of 1,001 videotapes, which Breitz has permanently buried in polypropylene video sleeves. Each of the sleeves is emblazoned with a single verb excerpted from the title of a film that was in circulation during the era of home video, then painstakingly coated in black acrylic abstraction. The verb, ‘to die’, for instance, is sourced from the VHS cover for Die Hard (1988), while ‘to do’ is cited from the VHS cover for Do The Right Thing (1989). In each case, the Digest verb faithfully appropriates and reproduces the font that was used on the original VHS cover. The tapes are arranged on shallow wooden racks, evoking the display aesthetics of video rental stores. The content carried on the concealed videocassettes will remain forever unrevealed, leaving viewers to speculate regarding what footage is being preserved within this extensive archive.

Video set in motion a revolution in the late 1970s, anticipating a future in which moving images would be accessible, affordable and infinitely reproducible – while at the same time predicting the inevitable erosion of the collective viewing experience that cinema had offered (in favour of home entertainment). For all the radical shifts predicted by video, the videotape itself remained unapologetically and stubbornly trapped in physical objecthood. Less than a decade into the twenty-first century, the format was dead. The moving image was destined for a virtual future, in keeping with the profound disembodiment that the digital era would bring to the public sphere at large. As a final resting place for miles and miles of videotape, Digest commemorates the embodied subjectivity of the analogue era, immortalising a mode of image consumption that has since slipped into obsolescence.

Digest owes the seriality of its structure partially to the legend of Scheherazade, who – according to The Arabian Nights (often referred to as One Thousand and One Nights) – was the 1,001st wife of the powerful sultan, Shahrayar. After his first wife had betrayed him, the sultan decided, in a fit of misogynist loathing, that he would marry a fresh virgin on a daily basis. With each new dawn, he would systematically decapitate the wife from the day before, denying her the possibility of committing adultery. Scheherazade avoids the fate of her predecessors by putting her exceptional storytelling skills to work. On her first night with Shahrayar, she enthrals the sultan with a tantalising tale that is too long to be completed by dawn. Desperate to hear the end of the story, Shahrayar allows his wife to live for another night. On the thousand nights that follow, Scheherazade spins cliffhanger after cliffhanger. Her ability to generate narrative suspense literally becomes her means of survival. Eventually, after 1,001 nights, Shahrayar decides to spare Scheherazade’s life and to crown her his queen.

Digest was completed at the height of the Covid-19 pandemic. The unprecedented restrictions of movement that have been imposed across the globe in response to the pandemic, have served as a violent reminder of the fragility of the social body. The suspended state of the little plastic bodies that are buried in Digest – their frustrated potential – can be read as analogous to our own retraction from physical space under pandemic conditions. Like Scheherazade herself, the videocassettes buried in the work hold the potential to carry and channel narrative, but ultimately these tapes (and their contents) are condemned to isolation and darkness.

First debuted on the Sharjah Biennial 14 (in early 2019), Digest was completed in late 2020 and was recently shown in full scale for the first time at the Akademie Der Künste in Berlin.

Candice Breitz (b. 1972, Johannesburg, South Africa) is an artist whose moving image installations have been shown internationally. Throughout her career, Breitz has explored the dynamics by means of which an individual becomes him or herself in relation to a larger community, be that community the immediate community that one encounters in family, or the real and imagined communities that are shaped not only by questions of national belonging, race, gender and religion but also by the increasingly undeniable influence of mainstream media such as television, cinema and popular culture. Most recently, Breitz’s work has focused on the conditions under which empathy is produced, reflecting on a media-saturated global culture in which strong identification with fictional characters and celebrity figures runs parallel to widespread indifference to the plight of those facing real-world adversity.

Breitz holds degrees from the University of the Witwatersrand (Johannesburg), the University of Chicago and Columbia University (NYC). She has participated in the Whitney Museum’s Independent Studio Program and led the Palais de Tokyo’s Le Pavillon residency as a visiting artist during the year 2005-2006. She has been a tenured professor at the Hochschule für Bildende Künste in Braunschweig since 2007.