The cup (chalice) to quaff the life–flow—
the cup that invites and summons the bees and moths to savor, quaff and carry
the pollen.(1) 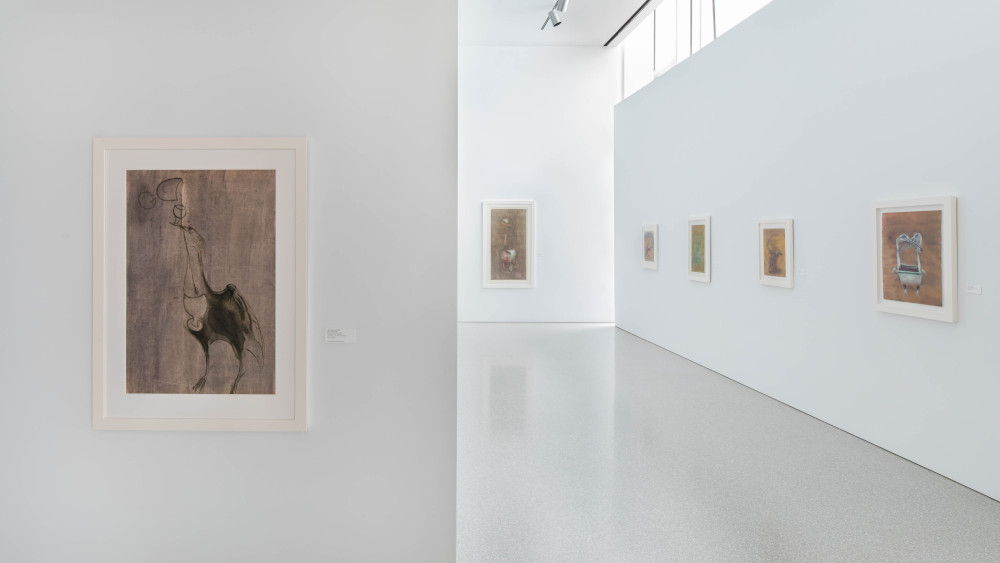 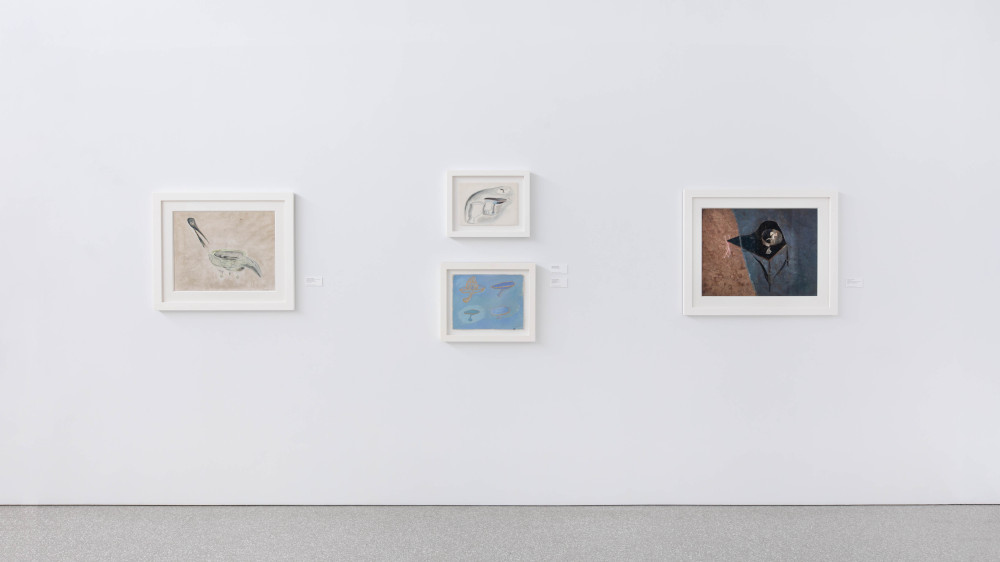 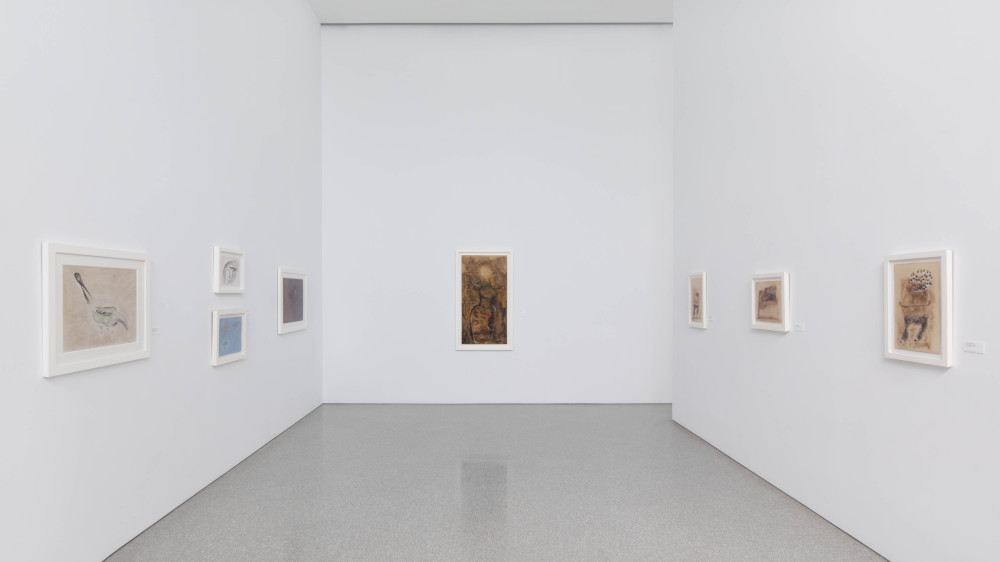 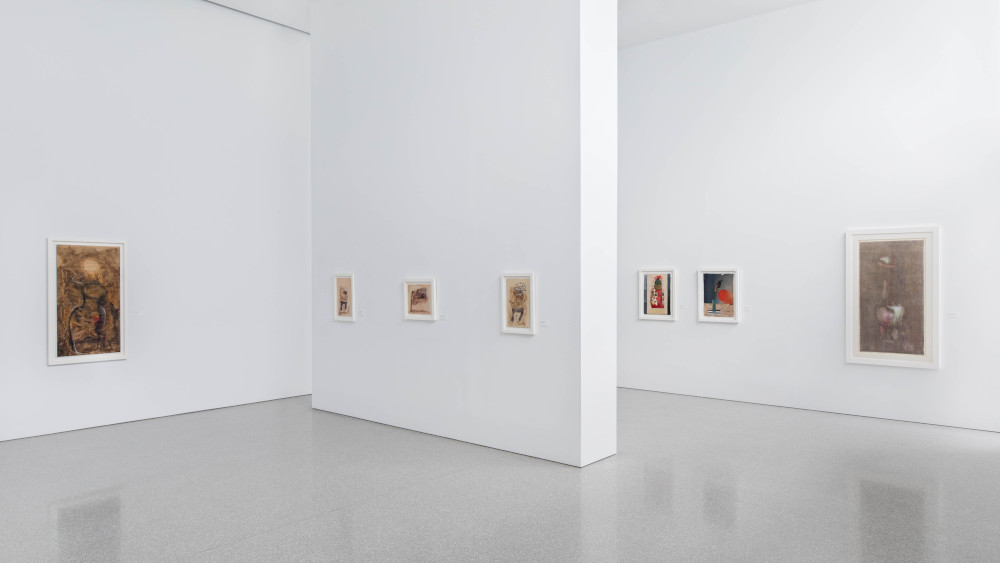 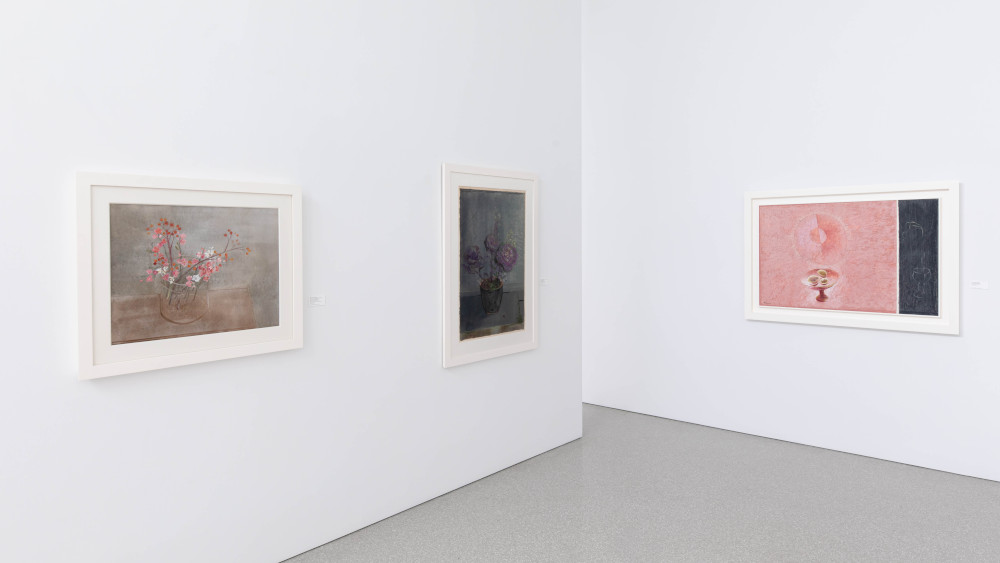 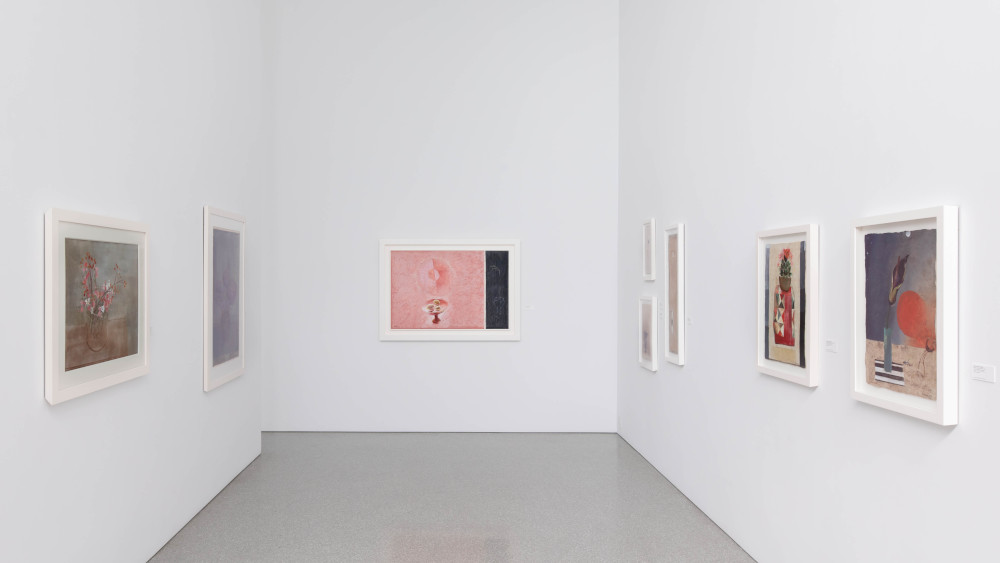 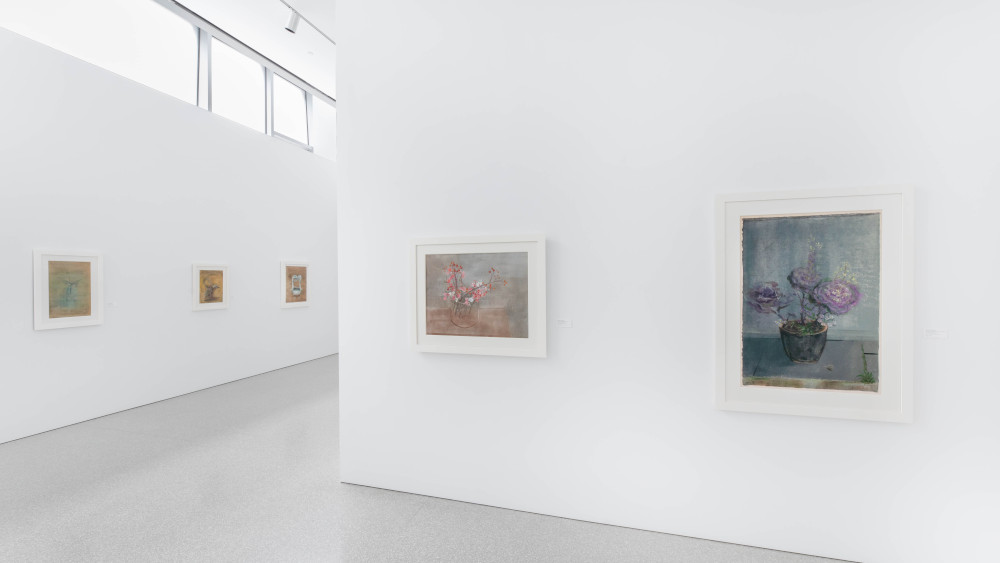 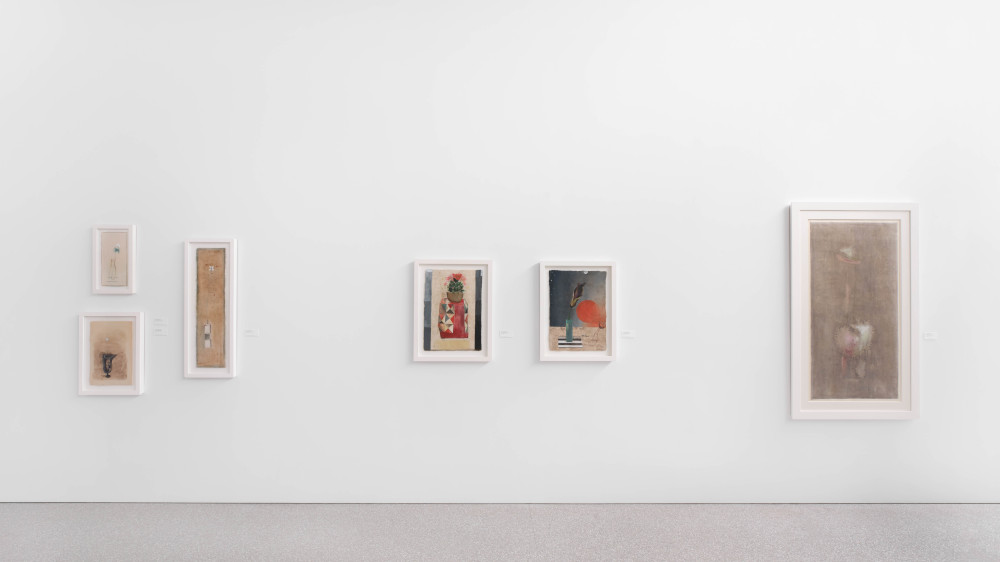 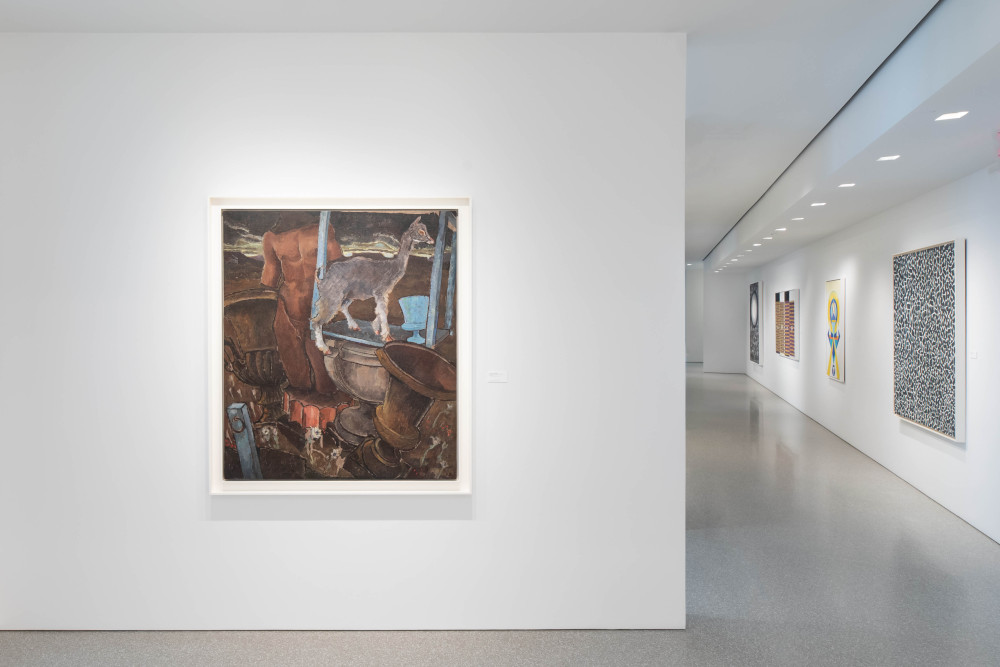 This exhibition is a seven-decade survey exploring the artist’s symbolic use of vessels in luminous, spiritual works that exemplify the essence of his mystical relationship with nature. From early oil paintings to surrealist works on paper and later quiet still-lifes, the imagery of the chalice is reflective of Graves’s expansive world view.

Drawn to its sensual form, Graves explained that the shape of the chalice originates from the sexual anatomy of flowers: the urn-shaped calix bears the flower’s reproductive organs, defined by the “male” pollen-bearing stamen that surrounds the “female” seed-bearing pistil. As receptacles, the calix, cup, chalice, grail, urn and goblet contain the essential matter of life and embody its cyclical rituals.

Graves explained in a 1952 letter the symbolic possibilities of the chalice, calyx or cup:
As calyx: contains the flower, the potential of essential experience and renewal, and of growth.

The chalice was Graves’s private symbol for spiritual birth and the container for the soul, a motif through which he attempted to encourage the viewer toward enlightenment. Presenting the Sexual Essence of Morris Graves charts the evolution of this recurring form as a reflection on an artist who sought spiritual life and growth in a world that he felt was defined by disruption and disintegration.

About Morris Graves
Known for contemplative, haunting images that immortalize the essence of the creatures that inspired him, Morris Graves (1910-2001) lived a life of personal exploration in harmony with nature. An important American modernist, Graves achieved national and international acclaim for his visionary and spiritual works that poetically revealed the mysteries of nature. This communion with the natural world and its eloquent expression through gouache and watercolor was further inspired and influenced by Buddhism, particularly Zen, as well as the arts of East Asia and India.

One of the leading artists of the Pacific Northwest, Morris Graves spent most of his life on the West Coast, a location that had a significant impact on his artistic development. Shortly after his birth, his family moved from Fox Valley, Oregon to Seattle, WA with the hope of finding better economic opportunities. Graves was stricken with pneumonia as a child and spent hours in the family garden, where his keen eye for nature first developed. In 1928, he dropped out of high school and became a merchant sailor, traveling to China, Japan, and the Philippines; he was struck with an instant affinity for East Asian culture. Upon his return to the United States, Graves traveled extensively before settling in Beaumont, Texas, where he finished high school and was described in the yearbook as “a vagabond artist with a commanding mien—rushing here or there with flowers or canvas in hand.”(3) He eventually made his way back to Seattle, where he became a part of an influential artistic community that included Mark Tobey, John Cage and Merce Cunningham.

Graves was largely self-taught (his education was limited to high school), but his lack of formal art training did not limit his considerable talent. In 1933, his work won first prize at the Northwest Annual Exhibition at the Seattle Art Museum – an award that led to the patronage and guidance of Dr. Richard Fuller, the museum’s founding director. In 1936, Graves had his first solo exhibition at the Seattle Art Museum, and that same year, he began painting for the Federal Art Project. In 1940, Graves participated in two group exhibitions at the Museum of Modern Art (MoMA), New York: 35 under 35 and Mystery and Sentiment. However, 1942 was a breakthrough year when, after visiting his studio, Marian Willard Johnson and Dorothy Miller decided to champion his art. Johnson gave him a solo show—the first of a total of fourteen dedicated to Graves—at the Willard Gallery, and Miller included his work in MoMA’s important showcase of emerging American artists, Americans 1942: 18 Artists from 9 States. As a result of those two exhibitions, MoMA director Alfred Barr purchased an unprecedented eleven works by Graves for the museum. Duncan Phillips—hailing Graves as an “original genius”(4)—also acquired several works for The Phillips Collection in Washington, DC. That same year, Graves was drafted into the US Army, and when his application for conscientious objector status was declined, Graves spent the year in a military prison; he was released in 1943. In 1949, the artist’s work was presented at the XXIV Venice Biennale, Venice, Italy; it was also included that year in the landmark traveling exhibition Milestones of American Painting in our Century, organized by the Institute of Contemporary Art, Boston, MA.

Like Tobey, a close friend and confidant, Graves was deeply influenced by East Asian religions, particularly Zen Buddhism and Taoism. But unlike Tobey, his interests also extended to Hinduism, from which Graves drew some of his imagery. Dominated by images of birds usually surrounded by an abstract circle of color and forms, his work is strikingly silent, commanding the viewer’s intense focus. Graves’s work is deeply symbolic; birds, snakes, moons, flowers all speak to the artist’s love of nature, his interest in the transcendental, and his quest for an art that would “guide our journey from partial consciousness to full consciousness.”(5) But this full consciousness was also an internal state, and while Graves painted identifiable animals and plants, his were paintings of internal images, a “vision of the inner eye.”

For Graves, the mechanical cacophony of industry and technology—the airplanes that flew over his cottage, the cars that roared down streets—was a major obstacle to this journey. As part of his quest to escape the pollution of modernity, Graves moved to Ireland in 1954. That same year, Life magazine featured an article on him, Tobey, and fellow Pacific Northwest artists Guy Anderson and Kenneth Callahan. Paradoxically, technology was the inspiration for the body of work that Graves created during the time spent in Ireland; his Instruments for a New Navigation, a series of elegantly totemic sculptures in metal, glass and stone reminiscent of celestial bodies and telescopes, were executed during the advent of the space program. Ireland proved significant for Graves’s artistic evolution; the series represented his only foray into three-dimensions and related as much to an exploration of outer space as it did to his continuing interest in the spirituality of inner space. Graves continued to travel and exhibit extensively, in group and solo shows, and in 1964, he returned to the United States and settled in Humboldt County, California.

As the monumental scale of abstract expressionism and the irony of pop art came to dominate American modernism, Graves’s audience shifted internationally. In 1957, he became the first US artist to receive the Windsor Award, bestowed by the Duke and Duchess of Windsor, and in 1962, he visited India at the invitation of Indira Gandhi and met her father, Prime Minister Jawaharlal Nehru. In 1983, The Phillips Collection mounted a major retrospective, Vision of the Inner Eye, which traveled to the Greenville County Art Museum, Greenville, SC; Whitney Museum of American Art, New York, NY; Oakland Museum of Art, Oakland, CA; Seattle Art Museum, Seattle, WA; and the San Diego Art Museum, San Diego, CA. A solo exhibition focused on Graves’s early works, Morris Graves: The Early Works 1932-1938, took place in 1998 at the Whitney Museum of American Art; Museum of Northwest Art, La Conner, WA; Greenville County Museum of Art; and the Art Museum of South East Texas, Beaumont, TX. In 2000, the Humboldt Arts Council named their new museum after Graves, who donated over 100 works beginning in 1991. After his death in 2001, his house “The Lake” became home of the Morris Graves Foundation, a non-profit retreat for artists.

In 2010, a solo survey dedicated to Graves on the occasion of his centennial was shown at the Morris Graves Museum of Art (Humboldt Arts Council), Eureka, CA and Michael Rosenfeld Gallery mounted a concurrent exhibition, Morris Graves: Falcon of the Inner Eye: A Centennial Celebration. In 2016, Morris Graves: The Nature of Things was shown at the Los Angeles County Museum of Art, Los Angeles, CA. In 2013, Graves’s letters were published in a book, Morris Graves: Selected Letters, edited by Vicki Halper and Lawrence Fong and published by the University of Washington Press. That same year, his archives were made available to the public at the Knight Library in Eugene, OR.

In the last two decades, work by Graves has been consistently featured in a number group exhibitions, most notably Klange des Inneren Auges: John Cage, Mark Tobey, Morris Graves (Sounds of the Inner Eye: John Cage, Mark Tobey, Morris Graves) at the Kunsthalle Bremen, Germany and the Museum of Glass: International Center for Contemporary Art, Tacoma, WA (2002); Immeasurable Spaces, Incalculable Energies: Tobey, Graves, Callahan, Anderson at the Tacoma Art Museum, Tacoma, WA (2003); The Third Mind: American Artists Contemplate Asia, 1860-1989 at the Solomon R. Guggenheim Museum, New York, NY (2009); John Cage with Morris Graves and Mark Tobey at The Phillips Collection, Washington, DC (2012); and Modernism in the Pacific Northwest: The Mythic and the Mystical at the Seattle Art Museum (2014). Most recently, Graves’s work was on view in the exhibitions Peindre la nuit (Painting the Night) at the Centre Pompidou-Metz in France (2018) and continuum… at the Museum of Northwest Art in La Conner, WA (2019). Bird of the Inner Eye, a chamber opera based on the artist’s letters and archives and written by Joan Schirle and Gina Leishman, is currently in production and will be presented at Dell’Arte International, Blue Lake, CA in June 2020.